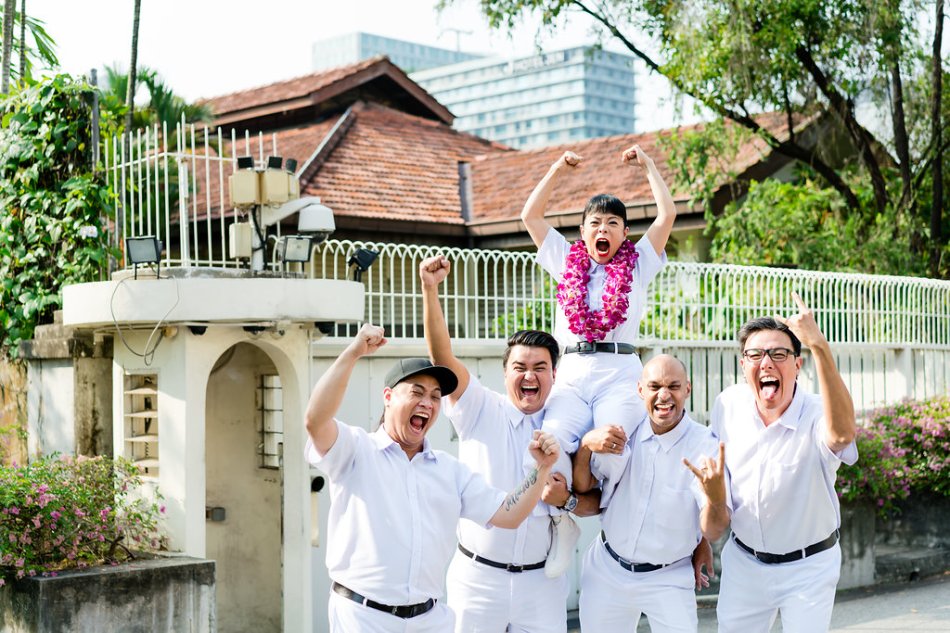 It’s a quarter past 11 on a Saturday night and we’re seated on a couch, watching the beautiful chaos that is Ugly In The Morning unfold before us in a small studio at Upper Thomson – drummer Joseph Saleem is running in and out with his ear clasped to the phone, offering us some durian on his way out, and we hear guitarist Noel Ong slightly drunk in the studio as he thrashes it out a couple of drums, fresh from playing a Hindi rock gig with fellow guitarist and co-founder David Baptista, while bassist Clement Yang looks on bemusedly. Lead vocalist Pam Oei sits in a corner and calmly explains: “This is quite normal,” and we later find out that they have in fact, managed to complete a successful rehearsal at 2am before packing up and going home.

Funk/Rock band Ugly In The Morning are arguably one of the cheekiest members of the music scene today (evidenced by their publicity photos) and plays the kind of music that you won’t hear about unless you follow them. But once you hear their tight harmonies, catchy melodies and truly unique sounds, you will never forget an Ugly In The Morning song. Having been in the scene since 1999, the band has found moderate success with two albums under their belt and are set to release their third album on 14th April.

Titled 3 or More If You Can Afford It, the album has been in the works for the past 5 years, and the launch will be accompanied by a full concert of all the album’s songs held at the Esplanade Annexe Studio, where fans can also purchase band merchandise. They’ve assembled a stellar support team as well – pop duo Jack and Rai, better known for their covers, will be opening for the band with a rare set of original songs, “Godfather of Sound” Shah Tahir has been recruited as the Uglies’ sound engineer, while Brian Gothong Tan will be providing visuals for the gig.

Says Pam: “We wanted to launch the album with a bang instead of just quietly releasing it. We’re more or less ready for the concert already. Right now, we’re working on incorporating our backup singers Audrey Luo and Candice de Rozario for some of the tracks, where they’ll be going ‘oooooooh waaaaaaah’. Mostly though, we’ve been working on this music for so long that we’re so familiar with it, and now we just want to write new music. And hopefully, people will listen to it.”

A lot has changed in the five years in between albums, and 3 or More If You Can Afford It will mark the album debuts with the band for newest members Pam and Joseph. Best known as one third of the Dim Sum Dollies and a frequent sight onstage in Singapore, Pam’s role in Ugly in the Morning is unsurprising, considering how music has always been her first love. David elaborates: “It’s weird thinking about how we first brought Pam into the band. She’s a childhood friend of Noel, and she’s been following us for a while. When we put out an ad on Facebook looking for a new singer, she asked if she could audition, and I thought to myself ‘I never thought of having a chick as the lead singer before.”

There’s evidently a strong sense of friendship and camaraderie in the room – most of the band’s members have known each other for a long time already – founding members Noel and David have been together since their school days and following each other all the way into the same company in BMT during the army. Noel explains: “When I first met David, I couldn’t even hold a chord, and David was already playing bands like Cream and Clapton. David was my inspiration to play guitar, and years later we started the band together.

Noel continues: “Clem on the other hand, we met him through our first drummer back in the 2000s, and when he first came in we thought ‘who is this teenager?’ The first jam he came to play with us, he made maybe 4 U turns before finding us, and when we sat outside drinking and talking cock afterwards, we could straightaway tell that he was a good fit.”

A total of 10 songs will be featured on the album, and features a range of styles and themes, such as the Little India riot inspired ‘Riot City’ (used in Ken Kwek’s 2014 film Unlucky Plaza), LGBT pride song ‘You Can’t Touch Me Now’, and even one dedicated to late actress Emma Yong titled ‘Emma Dreaming’. The band prides itself on how Pam is one of the strongest singers they’ve had, complimenting her on the unique flair she brings with her voice. On how the magic happens in the studio, Pam explains: “The band throws me an instrumental, and I write the melody and the lyrics. There’s a very strong sense of ownership of the songs because all of us are involved in the creation process.”

There are times the band wishes they had more exposure though, and laments the lack of airplay for local music. Noel explains: “You know, in other countries, it’s a rule to play at least one local band per hour. The way our brains are wired, music is all about repetition, and the more you hear it, the more you’l remember and want to hear it more. Radio stations give you a chance to be repeated, and people ask and request for you to be a part of that repetition process. Back then, we thought about how if bands like The Oddfellows could make it to radio, then so could we! It’s sad that from then till now, nothing has changed, and it’s still incredibly difficult to get airplay.”

Pam elaborates: “I released my folk rock album back in 1999, and it’s still just as difficult as it was back then to get onto the radio. We know that there’s more ‘marketable bands’ out there, and even for them, they only have 98.7 playing them sometimes, and they themselves lack support.”

But the band firmly recognizes that music certainly isn’t their main moneymaker, if at all, and each of them hold day jobs in some other form. In making time to make music, David says: “At a very basic level, if there’s something you’re really interested in, if you have love for it, then there’s no question about making time.”

Noel adds: “The band initially started with pub gigs, but in the end we got so frustrated thinking about how we only ever pick up our guitar when we need to earn money as opposed to when we want to.”

Circling back to the album’s name, Noel concludes: “The more I think about our title, the more apt it feels. How many local bands actually make it to their third album? We only make an album when we can afford it. We can’t afford to lose steam, and we’ll keep doing it when we have the money and material to put out a new album. It sounds insane, spending all your money and knowing you’ll get 0 profits, 0 gains in terms of markers of success and so far behind nil, but we know we’re not here to make a single goddamn cent. Honestly, it takes a certain amount of stupidity to keep doing this. There’s no logical reason behind it, but it makes us happy.”

Ugly In the Morning launches their 3rd album with a concert at the Esplanade Annexe Studio on 14th April. Tickets available from Peatix. For more information, visit their website here.

0 comments on “Ugly In The Morning: 3 Or More If You Can Afford It”