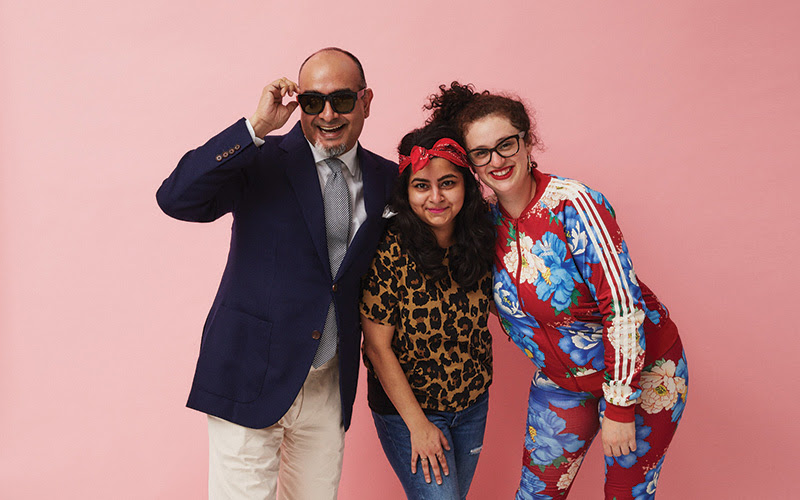 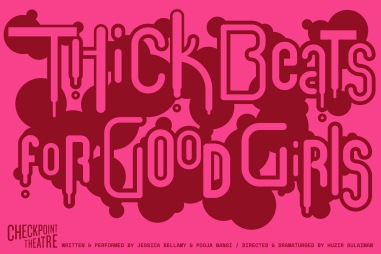 Jess Bellamy and Pooja Nansi have just completed a day of rehearsals at Checkpoint Theatre in Goodman Arts Centre. Their space is marked out in colourful shades of tape, while a visualisation board consisting of rappers from Nicki Minaj to Kanye West is stuck on a wall. Joined by director and dramaturg Huzir Sulaiman, we’re here to get down and find out about Checkpoint Theatre’s very first show of the season: Thick Beats For Good Girls.

Stemming from a conversation that first began in 2013, Thick Beats for Good Girls will see performers and creators Pooja and Jess dive headfirst into the realm of hip-hop and their shared love for it as women and as ethnic or religious minorities. Taking audiences through a series of  autobiographical vignettes tied together with fierce intellectual exploration and a carefully curated soundtrack, Thick Beats is set to raise the all important question of how to be both a ‘good girl’ and still find their unique identity as modern women – all while rocking out to a genre of music dear to both of them.

Says Pooja on the show’s conception: “Jess and I have known each other for 5 years, and when I first watched her show, it really resonated with me. We hung out for a while and one day over breakfast we decided to create a show together. We listed all the thing we felt were most urgent for us to write about, and in between issues like religion, a family of sisters and women, I suddenly asked Jess “Do you like rap?”, and we unexpectedly discovered we both loved hip-hop.”

On the title, Jess explains: “Thick beats is the antithesis to thin beats, which refers to lighter, airier pop sounds, as opposed to guttural music that sits in your stomach and makes you feel things. Through our shared love of hip-hop, we saw each other for who we were, beyond the good Indian girl and good Jewish girl on the outside, and wanted to strip that away to show that there was something more to us. We thought about how much growing within these traditional backgrounds defined us as people, and how through music, we could finally carve a space of our own.”

Considering a recent spate of events surrounding music and cultural appropriation, Thick Beats, in tackling a predominantly African-American genre, is careful never to overstep the boundaries and claim ownership over it. Says Jess: “Throughout the creation process, we tried to be as responsible as possible, such as engaging in black feminist literature, and always questioning whether it’s ok that two women who are not African American can make a piece of theatre about a primarily African American cultural experience.”

Jess continues: “But we’re not here to try and explain to people what the genre is and its entire history; what the show really is about is about re-analyzing how hip-hop has acted as the glue that has held us together, supported us and pushed us forward in our lives.  and find diversity within ourselves. Why is it that as contemporary women from conservative backgrounds we find we love this music, and why shouldn’t we? Hopefully, it prompts the audience to think about their own lives’ cultural influences.”

Starting off with a series of intense writing prompts from Huzir in 2015, the two initially came up with 3 shows worth of material in just 2 weeks. Fast forward three years later, with 16 drafts augmenting, cutting and restructuring the material, along with countless Skype calls later, rehearsals have now begun in earnest, and Thick Beats is well on its way to fruition. On how much she enjoyed the writing process, Pooja answers: “Most of my writing is confessional anyway, and that helps me navigate these stories with more depth, coming from a place of honesty. The writing process was really exciting, considering we were able to listen to hip-hop as research and put on a writer’s lens and keep asking ‘how do I feel about this image or these lyrics?”

So who then should come and watch Thick Beats for Good Girls? Says Pooja: “We had so many conversations about making sure that each person coming into the space would be able to gain from it, even if they’re not familiar with the hip-hop genre. We wanted it to be accessible not via the music, but through the important contemporary issues it deals with.”

Says Huzir: “You don’t need to know anything about hip-hop to appreciate the show, but there’s an extra layer of pleasure to be gained from those who even have a little experience with hip-hop, whether you heard it at a party or a total hip-hop nerd. Ultimately though, it’s a play that’s for any woman, or anyone who loves and appreciates women. I recently realized that there’s so many strong women in the team, from the designers to the interns, and I really feel the energy in the room because it’s so rare to get this level of honesty and openness and inclusivity that doesn’t shut out men.”

Huzir concludes: “As a dramaturg, I genuinely want to help this show because it matters so much to its creators. At the same time, it’s also a tremendously fun show with both hilarious and poignant moments that will challenge and push audience members, while still respecting them. It’s a show that comes from a personal place of love and passion for the music, and how they’ve developed their identity from it, and a powerful insight into how two women from seemingly different backgrounds having negotiated the challenges they’ve had growing up to become the amazing people they are today.” 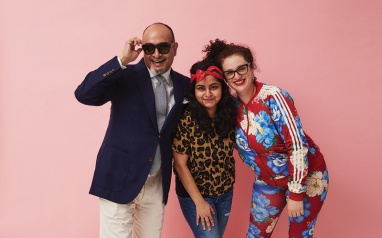 And as for a bonus, we asked all three of them what would be their desert island hip hop songs, i.e. the one song they would pick if stuck on a deserted island. The answers are as follows:

Pooja: “Tupac’s Changes. It’s the heart of what hiphop should do. It’s political, it’s hopeful, it’s probing about how we as human beings should be responsible for the world we want to make and live in.”

Jess: “Kanye West’s Monster. I love how midway through Nicki Minaj comes in and outraps every man in her vicinity and shows them all up.”

Huzir: “Jay-Z and Alicia Keys’ Empire State of Mind. I’m oddly moved by it, partly because it evokes such a beautiful place. New York played an important role in my development, and the fact that it celebrates it on such a granular level almost makes me tear up each time I hear the song.”