Review: Diva to the Death by Bite Me Productions 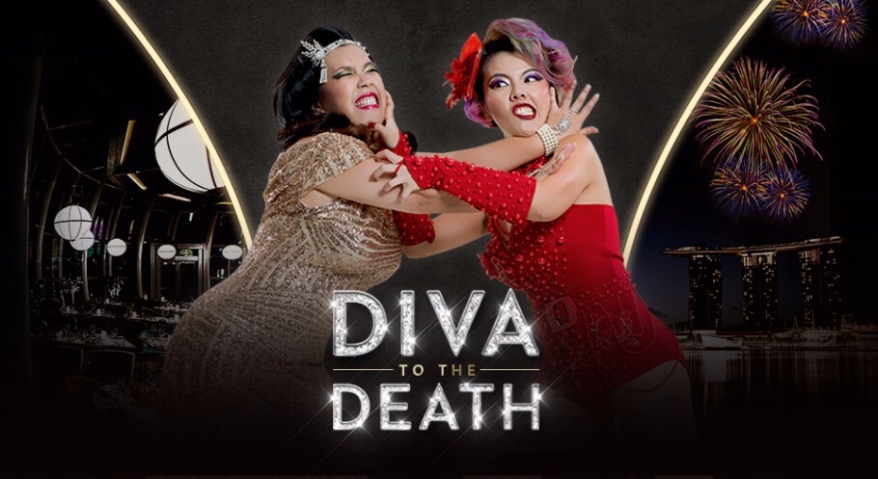 An amazingly fun show with a hilarious, laugh-a-minute script and outrageous characters well-performed by the talented cast. Potential spoilers up ahead!

Theatrical dining experiences are still a pretty new concept to Singapore, but with Bite Me Productions’ spectacular debut, they’ve already set the bar pretty high for other shows to follow. From the madcap imagination of Chestnuts creator Jonathan Lim comes Diva to the Death, as he pits jazz against getai in an unforgettable musical face-off between two of the spiciest singers around.

Transforming the real life Monti at 1-Pavilion into a thriving jazz club, audiences are first led to the rooftop for mingling, drinks and canapes before the show starts proper. Armed with an unbeatable view of the bayfront, Monti already sets the tone for a cool evening as guests arrived in cocktail dresses and suits, creating an atmosphere of pure class.

As Monti’s ‘manager’ (Faizal Abdullah) took to the stage, we’re introduced to our first diva of the night: reigning Queen of Monti and jazz singer extraordinaire Ms Destinee de Souza. Candice de Rozario is perfectly cast in the role, playing it cool yet revealing a deeply sultry edge, as she teases ‘I never saw a cheek I didn’t want to pinch’ while crooning to jazz standards with a twist, making reference to and poking fun at certain prominent public figures who’ve been very bad boys.

Enter Hong Kong tycoon and spanking new owner of Monti, Mr Leung Tai Lup (played by Jonathan Lim himself) with fiesty tigress and celebrity across HDB void decks Mong Cha Cha (Audrey Luo) on his arms. Dressed in an outlandish suit,l, Jonathan is immediately seen as a larger than life character, while Audrey Luo perfectly encompasses the extreme Ah Lian aesthetic, her voice as loud as her tiger print jacket and brashly throwing Hokkien curse words around. Fish out of water in the Westernized setting of Monti, a throwaway comment about the inaccessibility of Desiree’s music brings the action down to the main restaurant, where the true showdown begins.

From here on, Diva to the Death quickly spirals into pure comedy of the best kind. While de Souza sings, Leung and Mong laugh crassly, lost in their own private world, each one completely in character, regardless of whether audiences are watching them or not. Push comes to shove and the two battle for the title of Queen of Monti, with Mong initially appearing to be the clear winner when she first takes to the stage in a big stage costume, an even bigger personality and turning up the beat to counter de Souza’s ’emo music’. 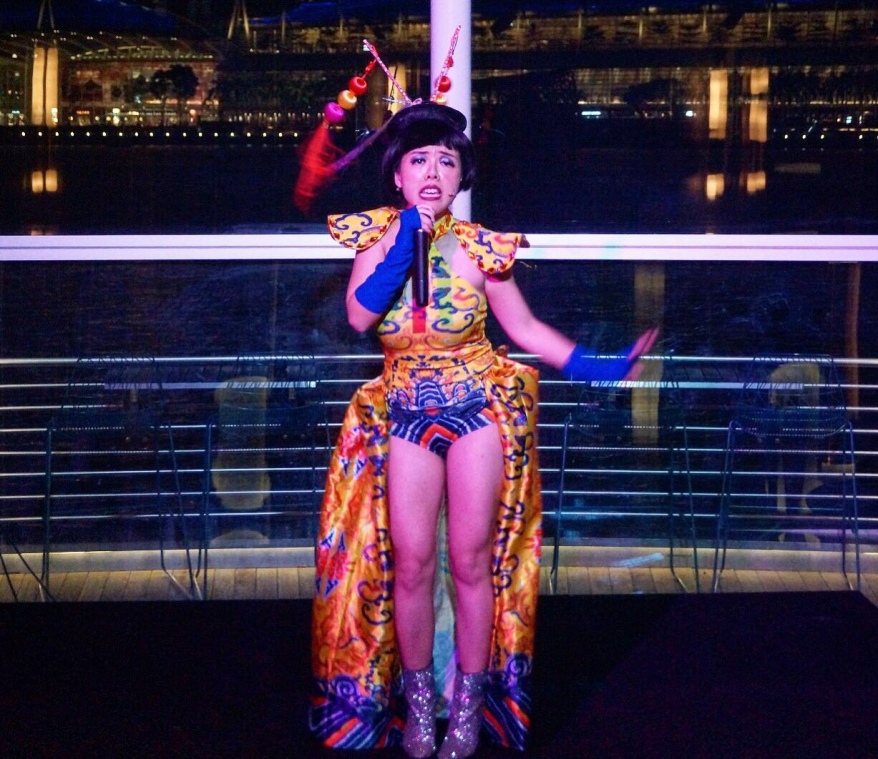 But Diva to the Death’s beauty lies in how just when you think one side has the clear upper hand, her opponent one ups her with a surprise twist, making the two more or less evenly matched as they wrest for their own backing tracks, tear each other’s clothes off, torment hapless waiter Willy (Terrance Tan) and chase each other around the entirety of Monti. It’s a farce that threatens to fall apart at any moment with a single mistake, but somehow, it’s been choreographed to perfection, resulting in sidesplitting laughter at the sheer ludicrousness of the entire situation.

It helps of course, that Jonathan Lim has injected the script with his signature brand of humour, each joke that comes out of these women’s mouths more outrageous and daring than the last, completely contrasting with Monti’s classy (or according to Mong, ‘crassy’) setting. Meanwhile, Elaine Chan’s music arrangement is spot on, mashing up some of the most recognizable getai tunes with jazz standards as the divas engage in a vocal duel, making for easy listening that still manages to surprise at every turn.

The Bite Me team have done a good job creating a worthy theatrical show, considering the limitations of the unconventional space. Depending on where you’re sitting, audience members may have to crane their neck a little more to get in on some of the whiplash-paced action. But to fully incorporate the bar and even the outdoor waterfront walkway is no easy feat, and there is an infectious, fervent energy that runs through this entire performance. It feels like we’ve experienced an ecstatic fever dream that only escalates with each set, and it amazes us just how engaged we felt at every moment throughout the night.

Of course, a theatrical dining experience isn’t complete without food, and Diva to the Death’s uniquely Singaporean supper menu was thoughtfully, served in between acts so as not to break the flow of action.

Diners were given more than enough time to consume the tasteful and tasty dishes, from a Laksa Risotto (with a succulent prawn) all the way to Angel Hair Truffle Pasta.

Even the Hendrick’s Gin based Last Kanji was well designed, mixing in Umeshu, Luxardo Maraschino and Fresh Lime Juice for a refreshing drink to quench our thirst amidst the chaos going on, just the right mix of tartness and alcoholic punch to hit the spot.

Finally, it made complete sense to serve up the desserts before the voting, sweetening us up as we made our decisions while we munched on the authentic tasting Kaya macarons and a delicious cup of Gula Melaka Panna cotta with Chendol and Grass Jelly.

Ultimately, whichever diva the audience ends up crowning as their Queen of the night, you can be sure that Diva to the Death will have you panting for breath at just how purely entertaining it is. A riot of a show where absolutely anything can happen, it’s clear that Bite Me Productions has a winsome debut on their hands, taking both local theatre and dining to a whole new level as they leave you hungry for more. We can’t wait to see what they serve up next.

Diva to the Death plays at Monti at The Fullerton Pavilion, 82 Collyer Quay, Singapore 049213 from 2nd February – 2nd March. Each ticket includes supper and 2 cocktails (or 2 non-alcoholic mocktails for non-drinkers), and are available from Peatix. On Fridays and Saturdays, guests can stay on after the show to continue partying as Monti transforms into The Hendricks, a 1920s-themed Jazz & Hip-hop club.