How does one go through countless losses and still come out an optimist? In the eyes and life of Palestinian poet Taha Muhammad Ali (1931-2011), one will find that it is completely possible. 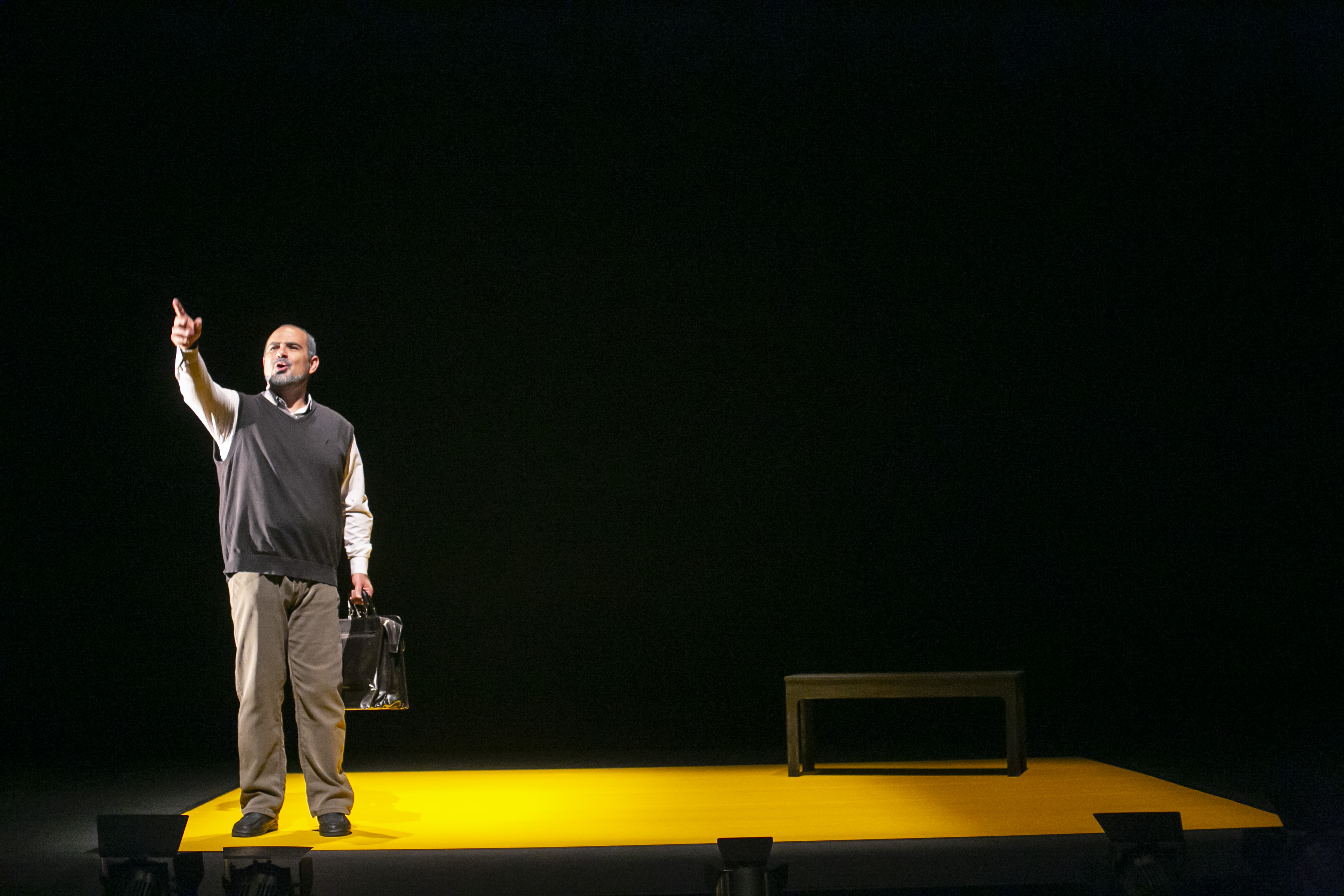 Directed by Amir Nizar Zuabi, TAHA is a show with a simple set-up – writer and performer Amer Hlehel is dressed only in a white shirt, black cotton vest and black pants while clutching a leather briefcase, while the only other object onstage is a small bench. The space is restricted to a small yellow square, and quality of the performance rests almost solely on the ability of the actor, save for a few subtle lighting changes and occasional incidental music. 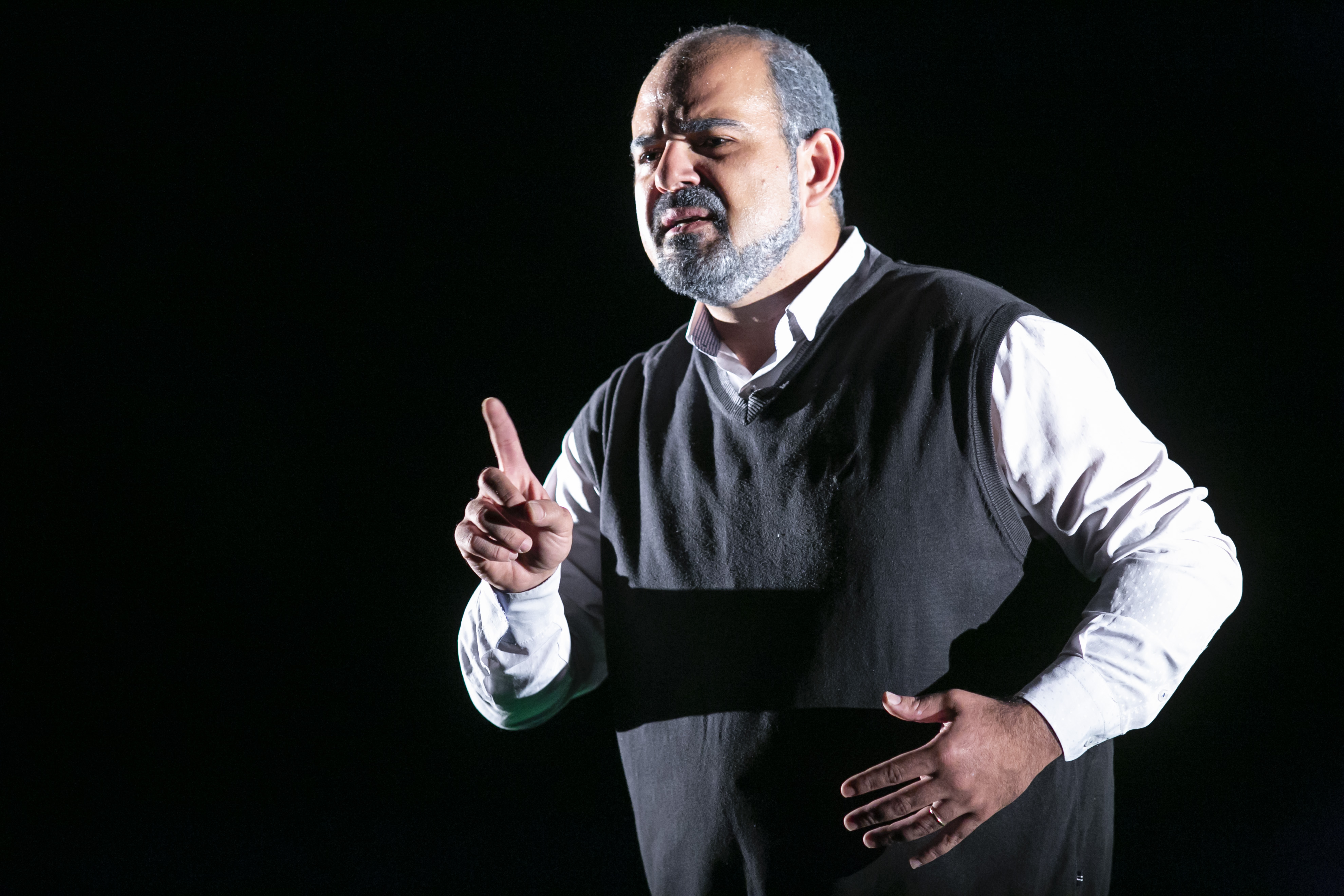 But as it turns out, TAHA’s simple setup is precisely what it needs to act as a backdrop for Hlehel’s words to come alive. TAHA goes though the life story of Taha Muhammad Ali, chronicling the time from his troubled birth in Saffuriyya to his time spent in a Lebanese refugee camp during the Arab-Israeli war, to his days spent running a souvenir shop, and finally, to the first time he is invited to read his poems in London, ‘home of the BBC’. Along the way, Taha recites some of his poetry in Arabic while the English translation is projected onscreen to enhance each incident. 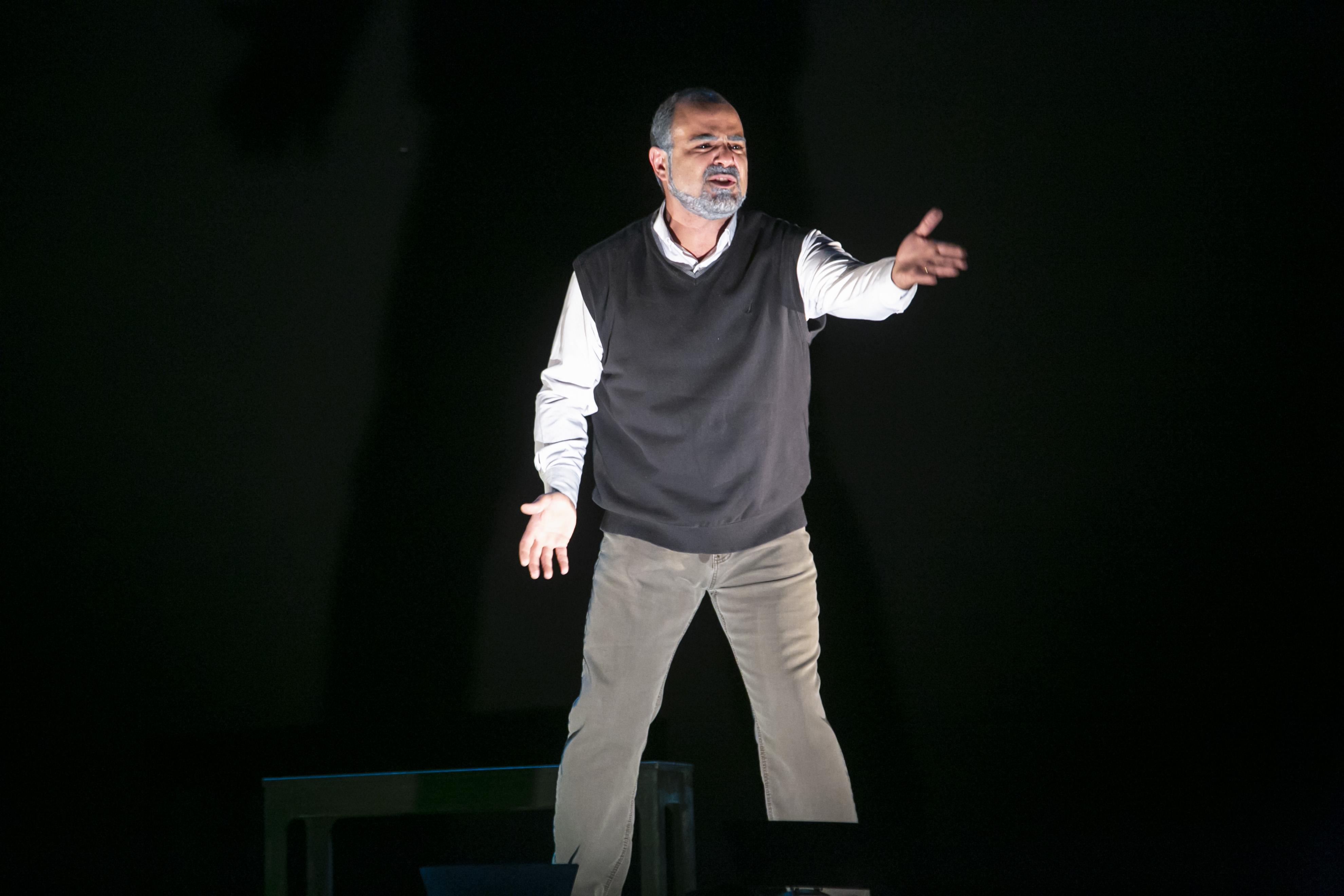 From the day he is born, Taha’s life is already thrust into a rollercoaster of tragedy and absurd comedy. Whether it’s being the first ‘Taha’ birthed by his mother to survive past infancy, or relishing the role as the ‘radio speaker’, repeating all that he hears on radio to townsfolk, Hlehel’s script describes each scene and memory so richly, one can imagine it unfolding before our very eyes. Taha is painted as an eternal optimist with a sharp business acumen – from a young age he already sells eggs to make ends meet, and Hlehel’s ability to bring out an earnest charm balanced with a fierce perseverance makes Taha a compelling character, with little ticks such as a constantly shaking hand making him fascinating to watch. 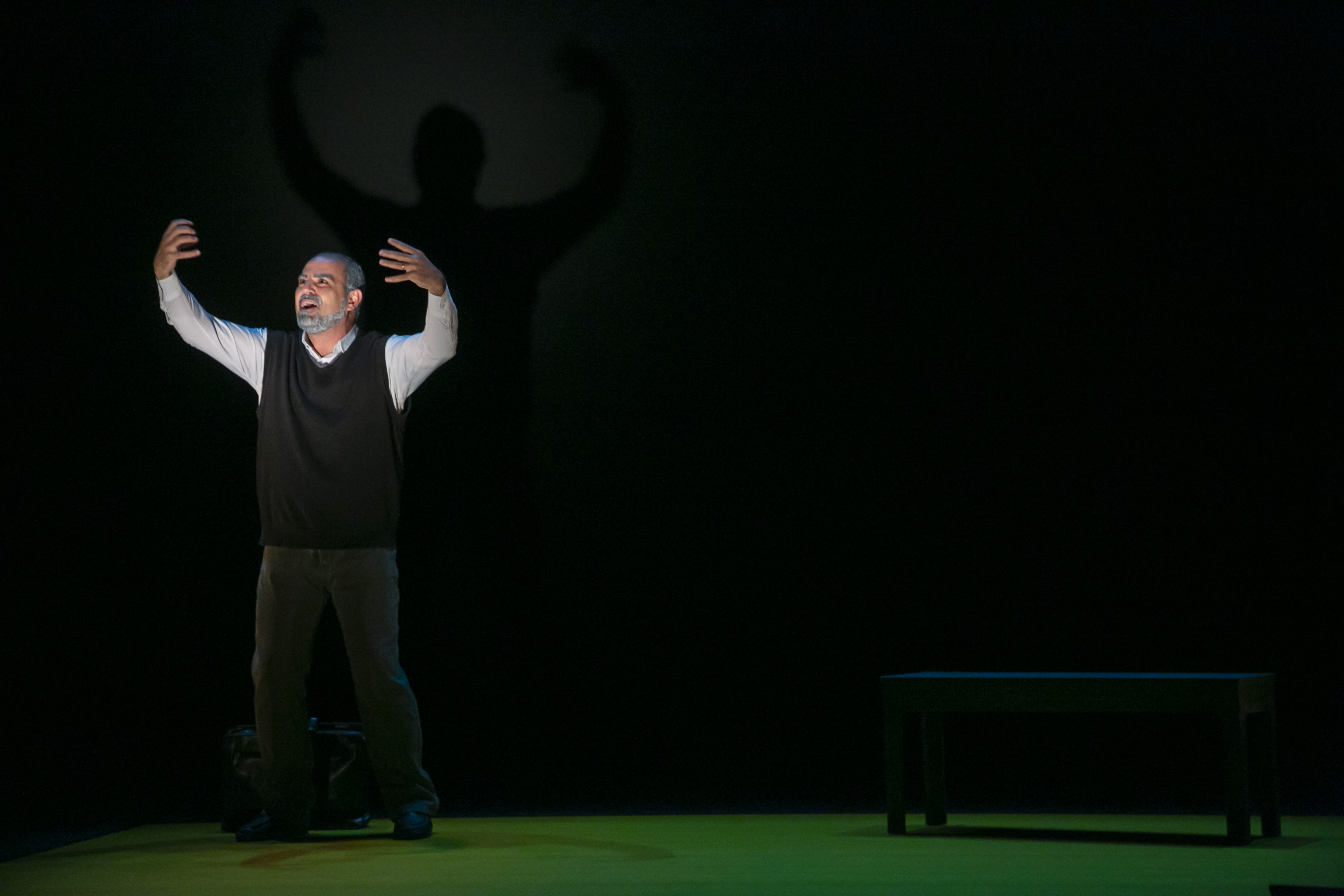 There is no need for fancy visuals or props; Hlehel’s only weapon is his voice, and with every emotion captured in his face and body, we feel personally invested in every event that befalls him. In describing the loss of Saffuriyya when his family returns from the refugee camp, they do not realise they’ve already reached it an hour ago, and characterises it with the loss of his grandfather’s bakery – the realisation that no longer will he smell the fresh olive oil wafting from it each day a sensory blow to our minds. Perhaps the strongest sequence of all is in describing the loss of his father, the man who he had always believed he was disappointing reveals that in fact, Taha’s ‘dreams are bigger than any last words he can give’. 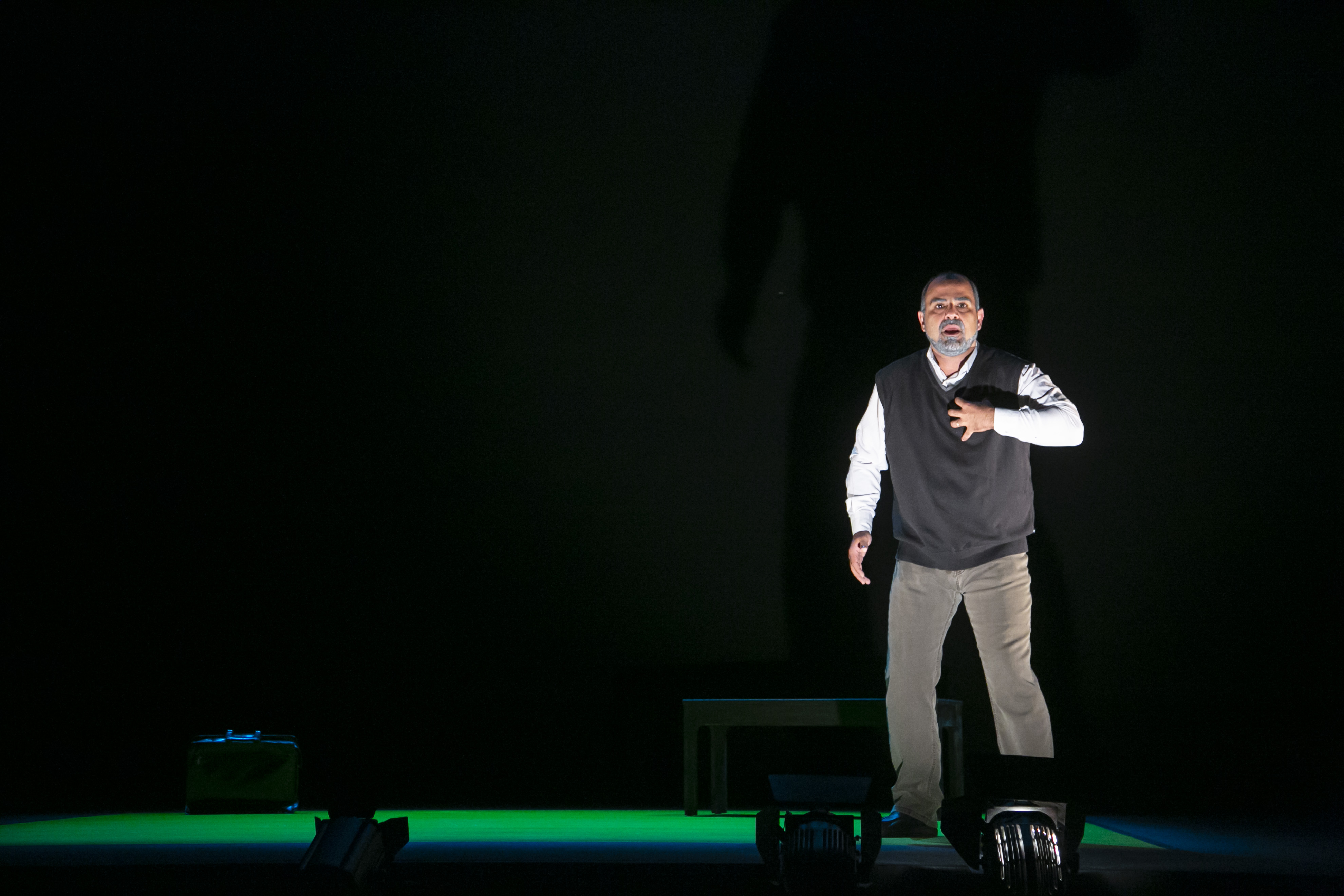 In the poetic words and performance of Hlehel, 10 years are compressed into the blink of an eye, a potentially disastrous reading becomes a triumphant turnaround, and the life of one man becomes a microcosm for the beauty of life itself, revelling in all its heartbreaking and at times, laugh out loud absurdities. TAHA is a work that brims with verve and unerring, life-affirming hope in the face of loss, and when you’ve reached its final, uplifting scene, you too will have received the gift of words through the staggering dreams of one truly inspirational man.

TAHA played at the KC Arts Centre from 4th – 5th May as part of SIFA 2018. The 2018 Singapore International Festival of the Arts runs from 26th April to 12th May across various venues. For the full lineup and ticketing details, visit the official website here