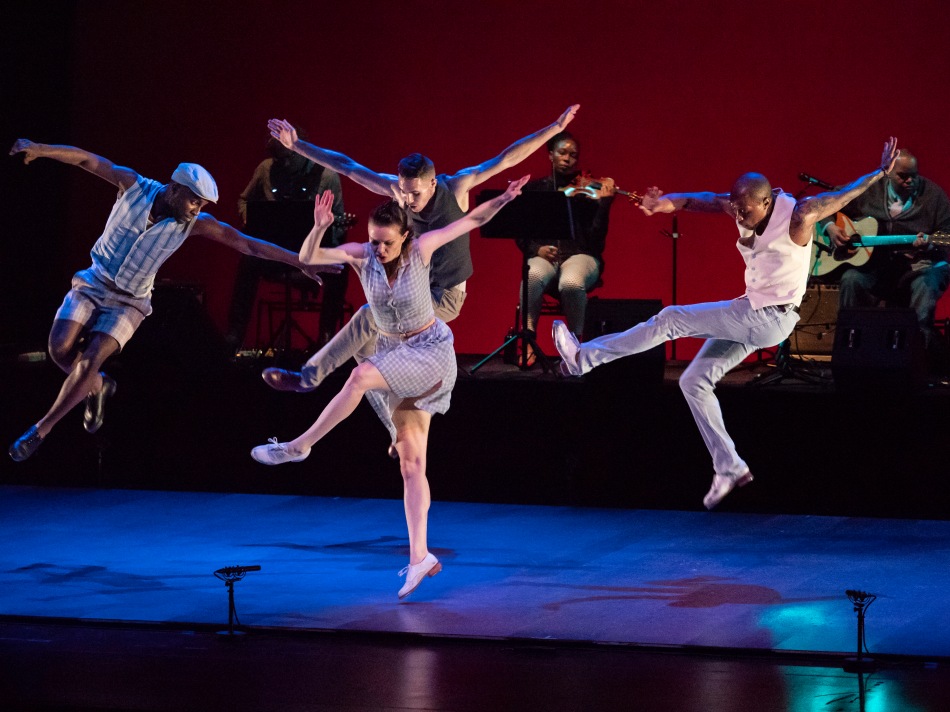 Tap meets blues in an unlikely but effective collaboration.

Is tap dance merely all show and no soul? Or is it possible that given the right music, tap can be a genre catapulted far beyond its stereotypical impression, into a form that seethes with expression and aches with emotion? Furious, rhythmic tap and slowed down, soulful blues might appear to be strange bedfellows at first, but choreographers Michelle Dorrance, Derick K. Grant and Dormeshia Sumbry-Edwards make it work, to stunningly innovative ends. 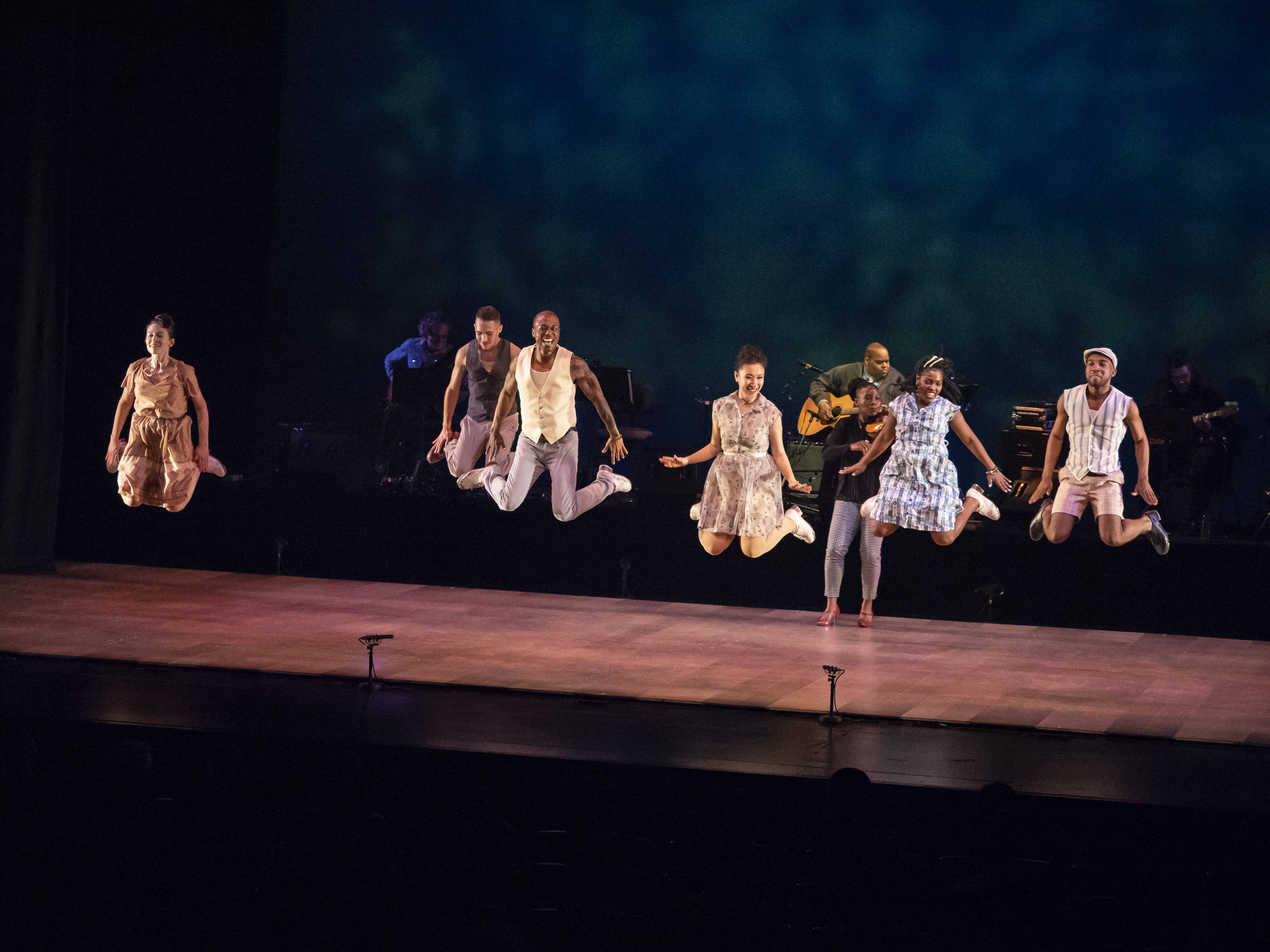 Accompanied by an original score by Toshi Reagon comprising blues, blues rock and even a hint of country, The Blues Project serves to showcase the huge potential both jazz and tap have, presenting an impressive variety of styles and diversity of bodies onstage. Toshi’s quintet of capable musicians BIGlovely provide the music here live, and well live up to their name – larger than life musicians who are constantly onstage, with even violinist Juliette Jones and drummer Shirazette Tinnin getting their chances to shine with lengthy solo numbers. 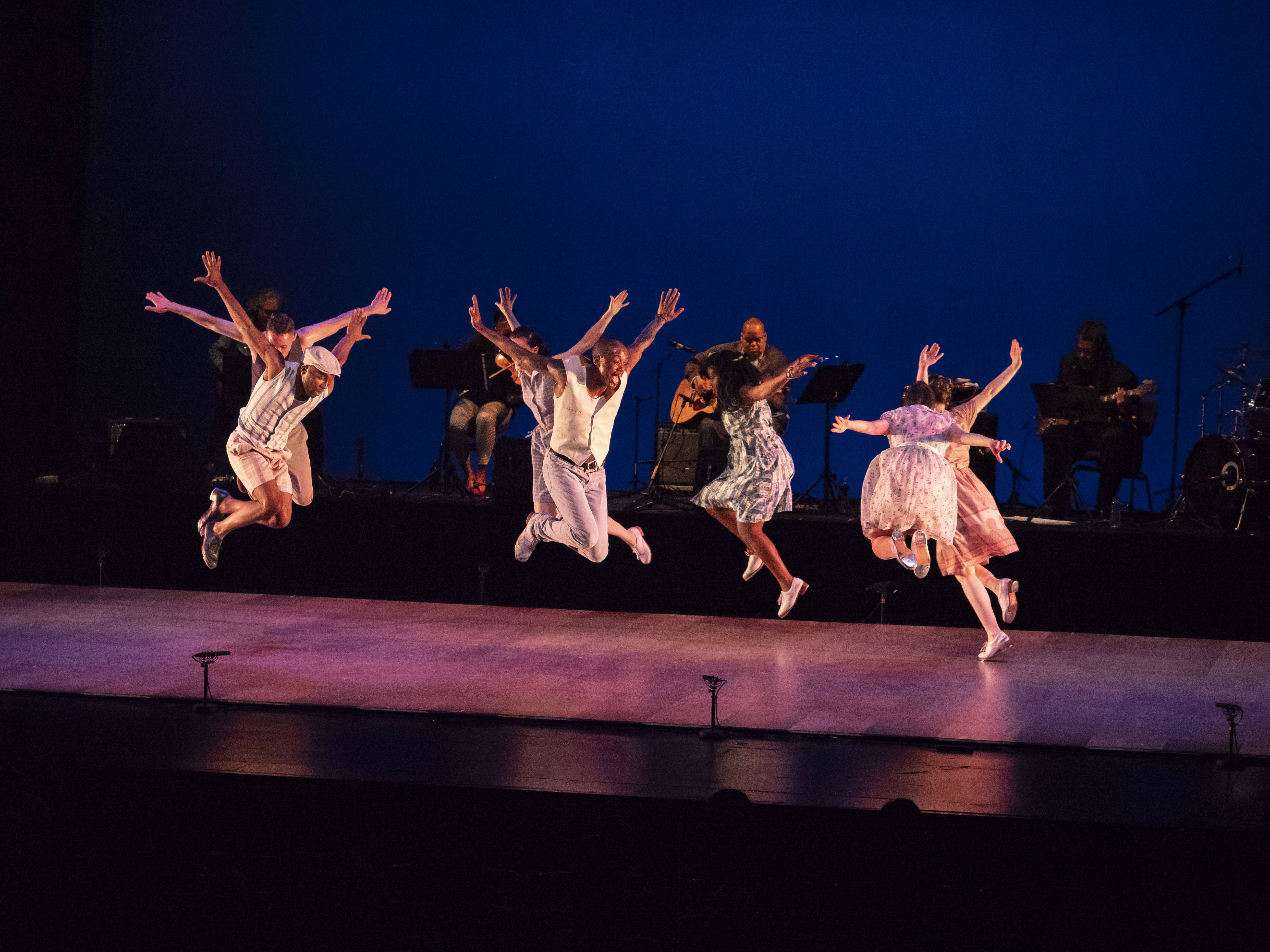 As for the tap dancing itself, there is an impossibly exuberant energy that emanates from each and every one of these eight dancers, particularly when they come together to perform numbers as a group, each of them dressed in glorious, 50’s inspired vintage wear, from pastel sundresses to pale vests and checkered shorts. In these mass choreographies, we initially see the group perform more standard, traditional forms of jazz, focusing entirely on the rhythms generated from their shoes, before these give way to more contemporary styles mixed in – street dance meets a little swing in a number which sees each of them playfully jostling to take the limelight as they attempt to outdo each other with increasingly impressive feats, from splits to impossibly smooth pivots on their heels. For these dancers, tap dancing no longer becomes an exercise simply for the feet – it is a full bodied affair where every limb and joint is to be used, expressing sheer joy in both their faces and unbridled freedom in their movements as they practically glide across the stage, completely in control of every sound and gesture. 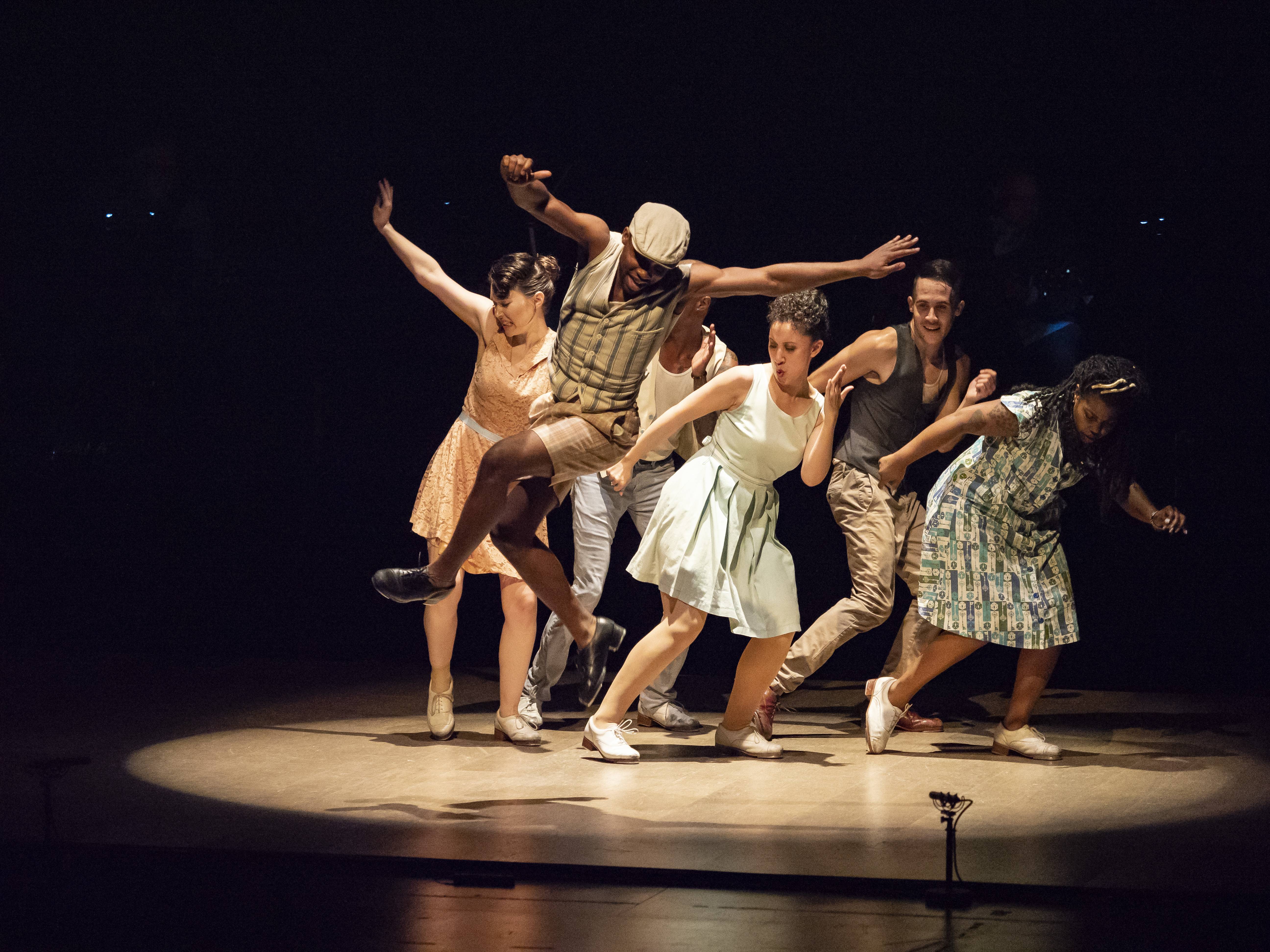 But beyond these sunny sequences, The Blues Project takes time to segue into more emotional numbers, reflected by the intensely coloured lighting from Kathy Kaufmann. These come out most strongly in the solo acts, with Toshi Reagon lending her voice, layered thick with anger, regret and yet, tenderness as she croons these soulful lyrics. One might think that tap dance might interrupt the pensive mood created by these tunes, but in fact, the steady, confident way with which dancers Maurice Chestnut, Josette Wiggan-Freund and Michelle Dorrance herself dance serve instead to complement the music, with every step carefully choreographed to bring out the song’s inherent emotions as they pour their energy into rapid slides and movements faster than the eye can see. 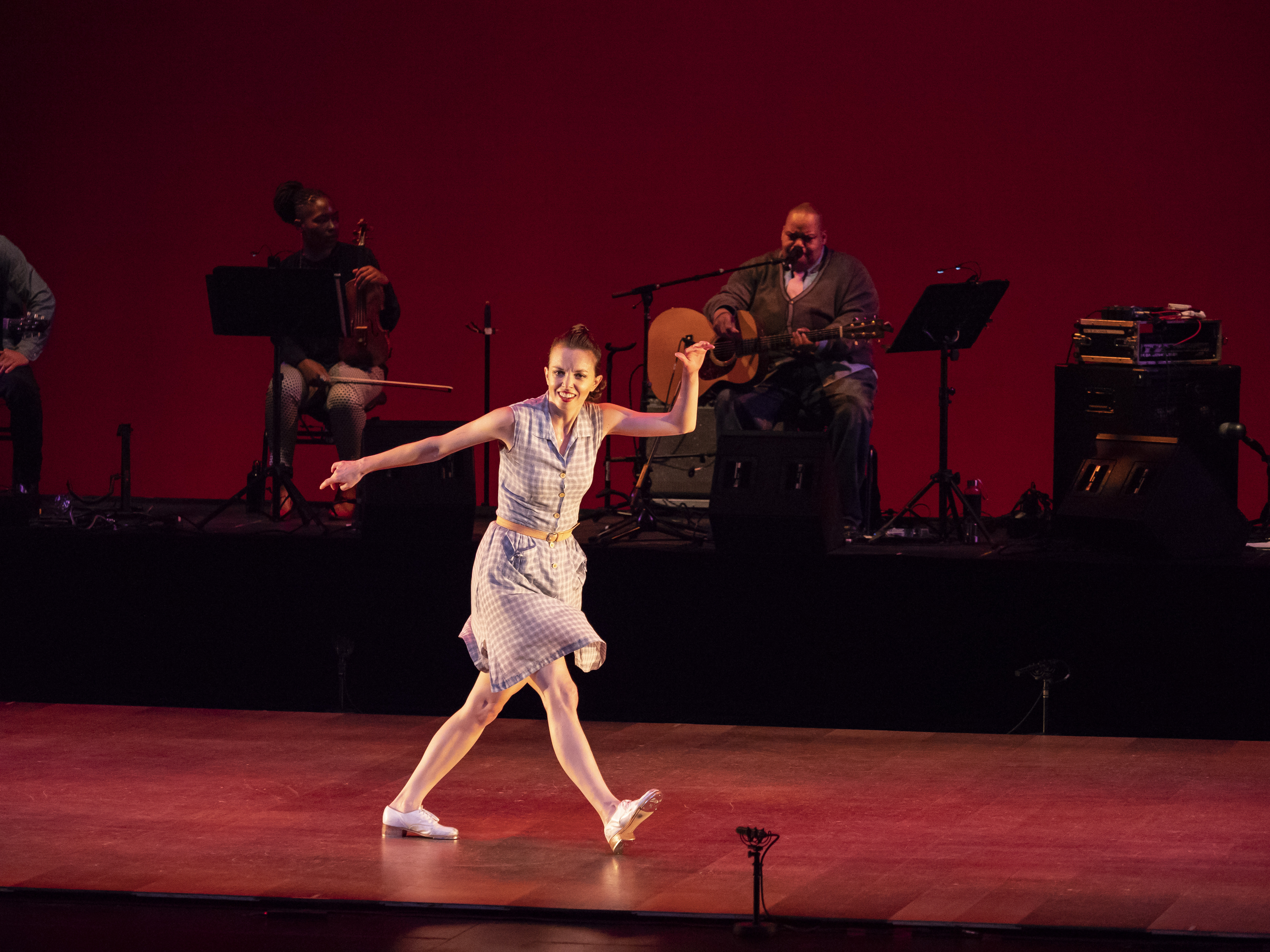 Chestnut moves with an unexpected lightness in contras to his unusual build, in contrast to typical lithe dancers, while Wiggan-Freund is on fire as she matches the darkness in Reagon’s lyrics with equally stormy moves, her body a thunderbolt as she flings and swings herself around the stage. And Dorrance, for her light build, moves with a frightening intensity, determination burning in her eyes as she drives each step into the ground before following up with a teetering, precarious looking pose, daring to fall, but transforms it into a thing of grace as she picks up the pace and brings a newfound ferocity to her steps. Each soloist only takes two claps to get the audience roused into following their rhythm, testament to the immediate connection they forge through skill and commitment alone. 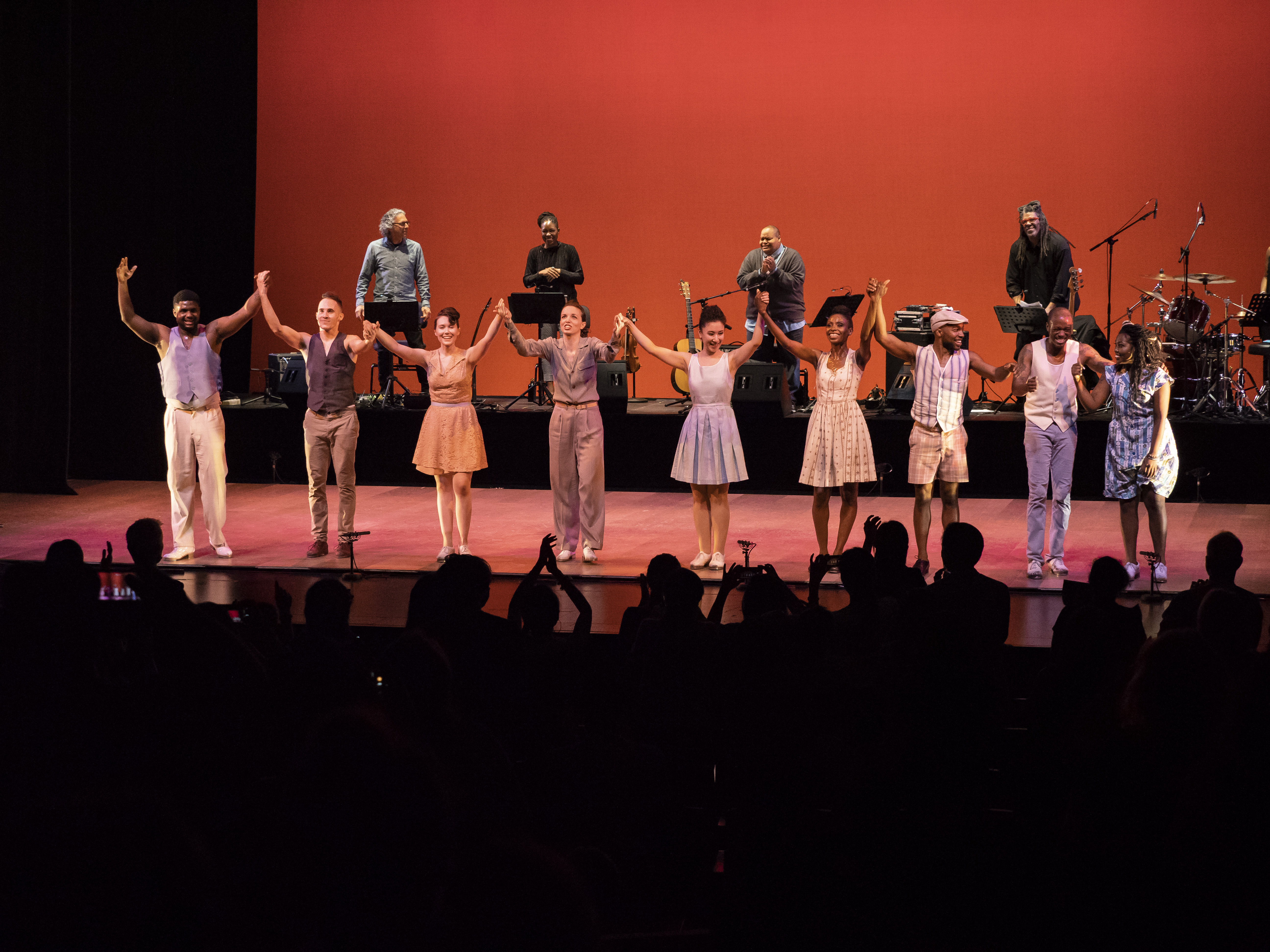 An electrifying visual and aural delight, The Blues Project should be considered a roaring success, allowing both blues and tap dance to break past convention and build on this unusual collaboration to forge a truly original performance that brings out the best of both worlds. There is incredible finesse to be witnessed onstage as these dancers display mastery over the dance form, and just as much joy to be gleaned from the equal amount of fun and pure ecstasy broadcast from these steps, providing the surprisingly perfect complement to Reagon’s evocative blues score.

The Blues Project plays at the Victoria Theatre from 8th – 9th May. Tickets available from SISTIC

0 comments on “SIFA 2018: The Blues Project by Dorrance Dance (Review)”