In a little over a week, co-op theatre group Wag The Dog returns to the scene with their second production. Following last year’s The Memory of Water, they’ll once again be heading back to the Drama Centre Black Box to present a rather different play – Heidi Schreck’s corporate comedy-drama The Consultant. First staged in 2014 in America, The Consultant is set during 2008, as colleagues attempt to survive and find their way through the Financial Crisis.

We met up with Wag the Dog members Susie Penrice-Tyler, Mark Seow and Deborah Hoon to talk more about the play and how Wag The Dog is doing one year on. On why they’re staging the show, Susie says: “The Consultant could be described as Mad Men meets The Office. It’s the first time anyone is staging it in Singapore, and completely different from The Memory of Water. Ten years on from the Financial Crisis, it’s still a very fresh incident in the minds of many people, some of whom never quite recovered from being laid off.” 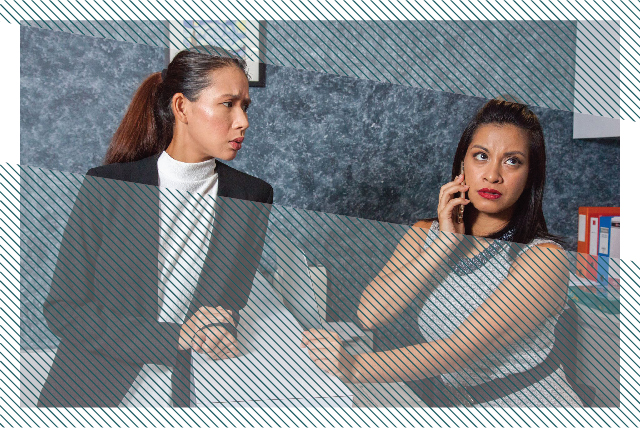 Deborah, who will be playing Amelia, the eponymous consultant herself, adds: “Unlike Memory, this is a much more director driven piece. A lot of the meaning doesn’t come directly from the script itself, but you’ll be able to see the meaning from the way we’ve decided to portray each character.”

Mark helps explain a little more about each of their characters: “I play Jun Suk, a Korean man who’s an eccentric, creative type. He’s going through a couple of things – financial problems, problems at work, a bad marriage, and he’s terrible at making presentations. He’s really fun to play because he’s everything I’m not, and audiences will recognise him as the kind of guy you’ll find in every office. Deborah, in playing Amelia, is very young and impressionable, fresh out of grad school and ready to help climb the corporate ladder while saving mankind. In helping out my character, we both enter on this journey where we’re both discovering ourselves.” 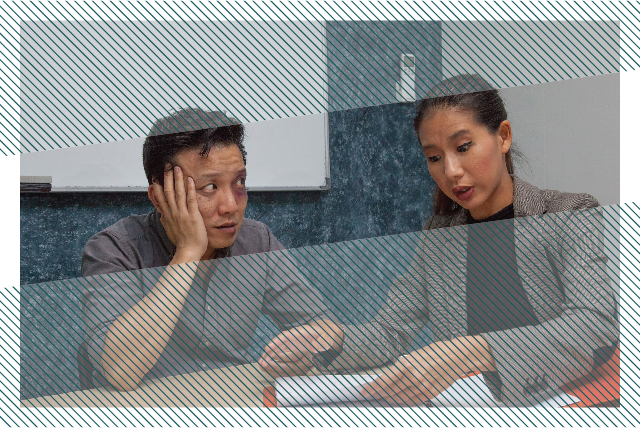 Susie, on the other hand, will be playing a character in a single, long scene, similar to her brief but important role as a ghost in Memory. Says Susie: “I play Barbara, the ex-employee of this company who’s now started her own thing. In 2008, people were defined by their jobs and companies, not so much what you do but who you’re with. I used to read the obituaries, and it would list the last job someone was in, and that was essentially their identity. When you lose your job, one has to end up finding the part of yourself you gave up to that company, and we’re dealing with a lot of heavy themes here, from unemployment to identity itself.” 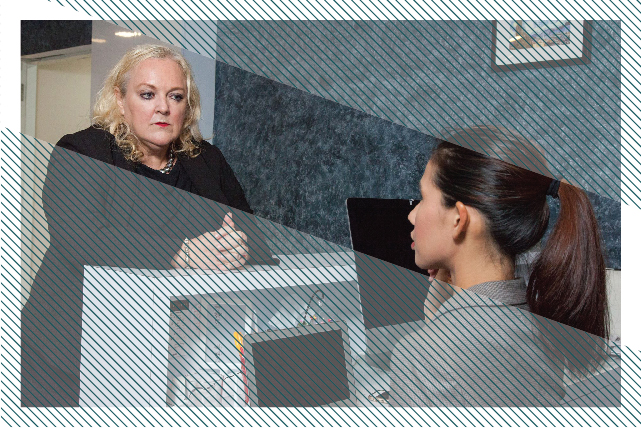 On how different the plays will be, says Mark: “Compared to Memory, it’s a completely different show with a whole new cast of characters. There’s a lot of humour involved, and it’s almost like a soap opera. It’s also very relatable even today – just look at how Grab took over Uber in a matter of hours, and you’ve got so many people suddenly laid off and finding themselves unemployed. Things are moving so fast in this unstable world of The Consultant, compared to the gloomy, perennial house in Memory.”

On what Wag The Dog eventually hopes to achieve, Susie explains: “I was just writing up our mission statement to be added to the programme booklet, and I think that ultimately, we just want to tell, good, well-written stories.”

Says Mark: “I was watching Glen Goei’s CNA interview and they were discussing being able to give artists and potential artists more opportunities in the scene. This is only our second year, we’re still very much finding our feet, but we’ve been doing some collaborations, such as working with Pathlight School to give back in our own way. This is one area we really want to develop in the long run, besides our own sustainability. In the short run, I’d like to be able to chart out our own annual season and announce it, be it with smaller shows, bigger shows or workshops, just to keep that momentum going and making sure our name is there.  Some of us may end up offstage more often, be it as director or producer, and eventually, we do hope to be on the same level as SRT or Pangdemonium.”

Deborah continues: “Different artistically from SRT and Pangdemonium though, here, we’re talking about reaching the same level of quality as they have. Wag the Dog is really all about consensus. Everyone has ownership over our productions, and that’s something that’s not always as evident in some other companies. There’s no clear distinction of roles for us, and each of us has our own backgrounds and trainings. Some of us may want to do something different, but in the end, its really about finding that middle ground we can all agree on.”

Wag the Dog also plans to stage a second production later this year, as of yet unannounced, but promises that it will be accessible, pricing wise. Mark concludes: “In every performance we do, we always look towards challenging ourselves in new ways, working harder each time. We don’t typecast characters and simply go ‘we need actor A to come in and do this’, there’s a lot of internal, organic growth, and for us, each time it’s a corporate and learning development opportunity.”

Wag the Dog appears to know exactly where they stand and how they intend to keep improving, and if The Memory of Water was anything to go by, they’ve got plenty of potential to shoot for the stars and make a genuine impact in the years to come. For now though, stay tuned for The Consultant as they premiere next week at the Drama Centre Black Box, and watch what Singapore’s only co-op theatre company is capable of.

The Consultant plays at the Drama Centre Black Box from 17th – 27th May. Tickets available from SISTIC

0 comments on “Wag the Dog Theatre: An Interview with the Cast of The Consultant”