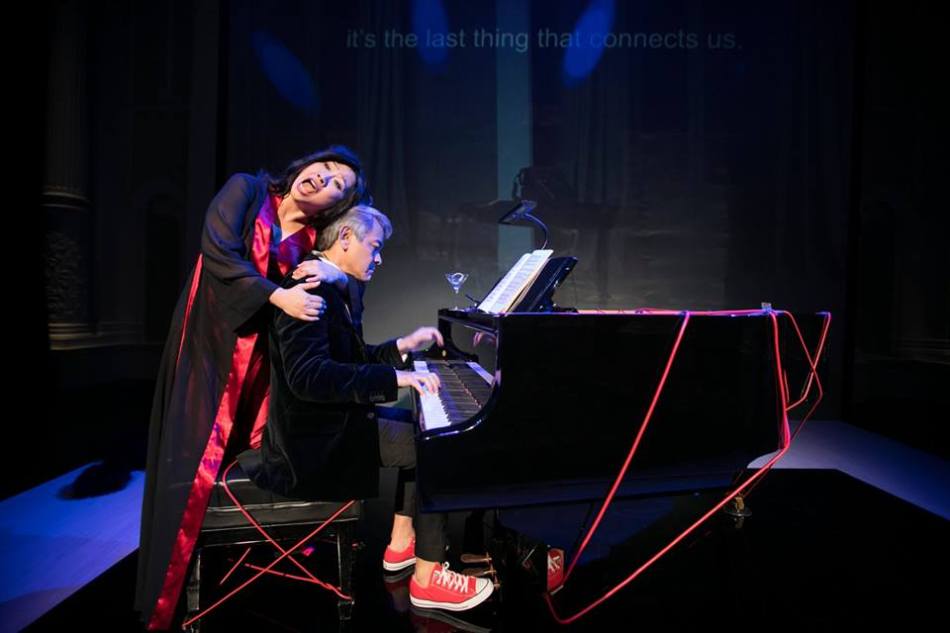 Heartbreak expresses itself through dropped calls and missed connections.

Irrevocably changing the way humans live and communicate, the phone has simultaneously enabled and limited the way in which we interact with one another over the years, due to our increasing reliance on it for human connection. It’s no wonder then that it continues to be the subject of art and music, from Adele’s “Hello” to Francis Poulenc’s one act, forty minute opera La Voix Humaine.

Based off Jean Cocteau’s play of the same name, this new staging of the 1958 opera was presented as the final production of VCH Presents’ 2017/18 season. Directed by W!ld Rice artistic director Ivan Heng, La Voix Humaine follows a distressed woman Elle as she makes a final, fateful phone call to her ex-lover before he is to be wed the next day, desperately keeping him on the line as she fights off nosy operators and disconnections. 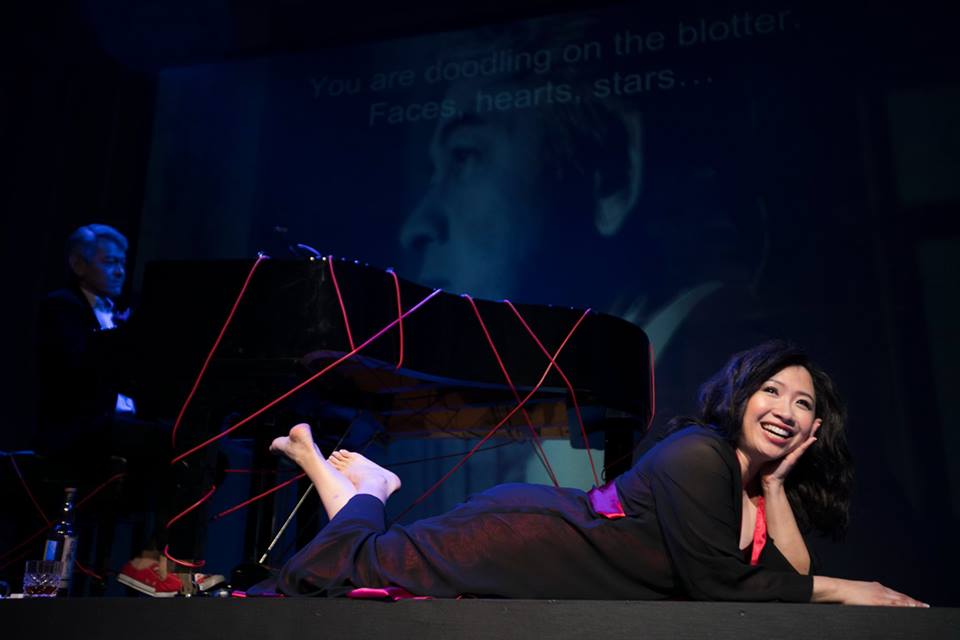 For a sixty year old opera, the themes in La Voix Humaine remain startlingly relevant even today. Ivan Heng’s vision fully brings out the play’s inherent drama, keeping us constantly on edge as we watch Elle madly storm across the stage, never sure where her unpredictable actions will bring her next, from taking an angry shot of whiskey to abruptly shaking out an entire briefcase of old love letters, possessing her with uncontrollable rage and indescribable agony, ready to toss them out and eviscerate all memory of the relationship. From the moment Elle opens with the first “Hello?”, audiences are immediately reminded of the many nerve wracking phone calls one has made. Playing Elle is US-based Singaporean singer Jennifer Lien, and as she moves from flirty to desperate to downright hysterical, the intimate, one-sided melodrama is both entertaining to watch while heartbreakingly relatable. Dressed in an elegant red nightgown by Goh Lai Chan, there’s a vulnerability expressed in both her flustered appearance and her voice. With the acoustics in the Victoria Concert Hall, each emotional lilt, angry or tearful can be heard as it resonates throughout the entire hall, allowing every mood to permeate us during the performance. 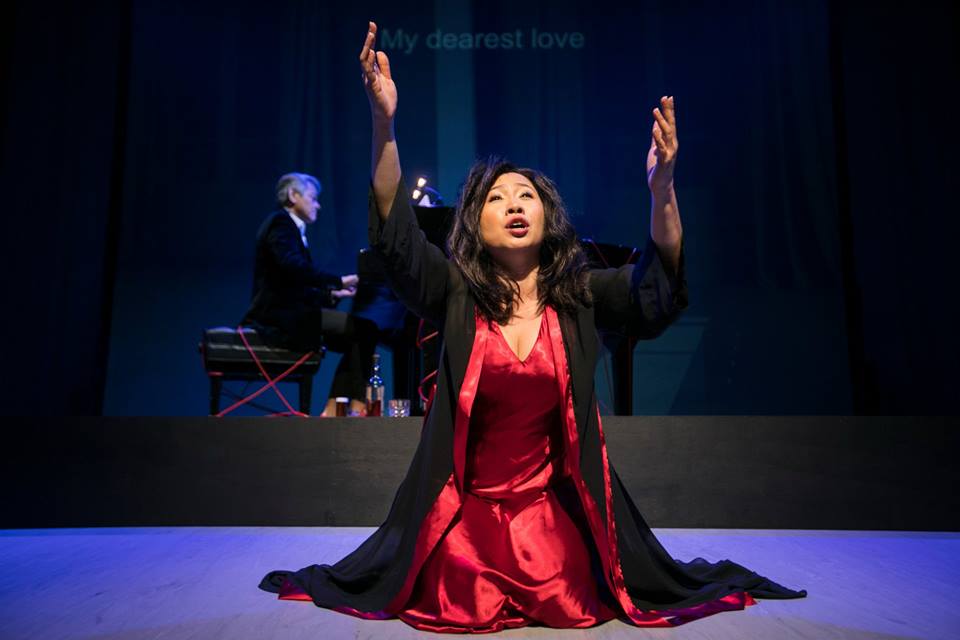 Being a chamber opera, La Voix Humaine does not require a complicated set up, and even in the expanse of the Victoria Concert Hall, Ivan Heng and Brian Gothong Tan’s simple staging is all it needs to succeed. By stripping away the stage to just the performers and a screen with video and surtitles, our attention is completely rapt on the performance before us, allowing us to focus completely on the drama that unfolds with no distractions. Tan provides a haunting video sequence that plays throughout the performance, and layered with a ghostly, night-vision like colour scheme, we’re led through Elle’s haunted psyche, travelling through empty hallways and obsessing over telephones, imagining her lover picking up the call in a restaurant, or visions of pills raining down as she recalls swallowing some in a botched suicide attempt. 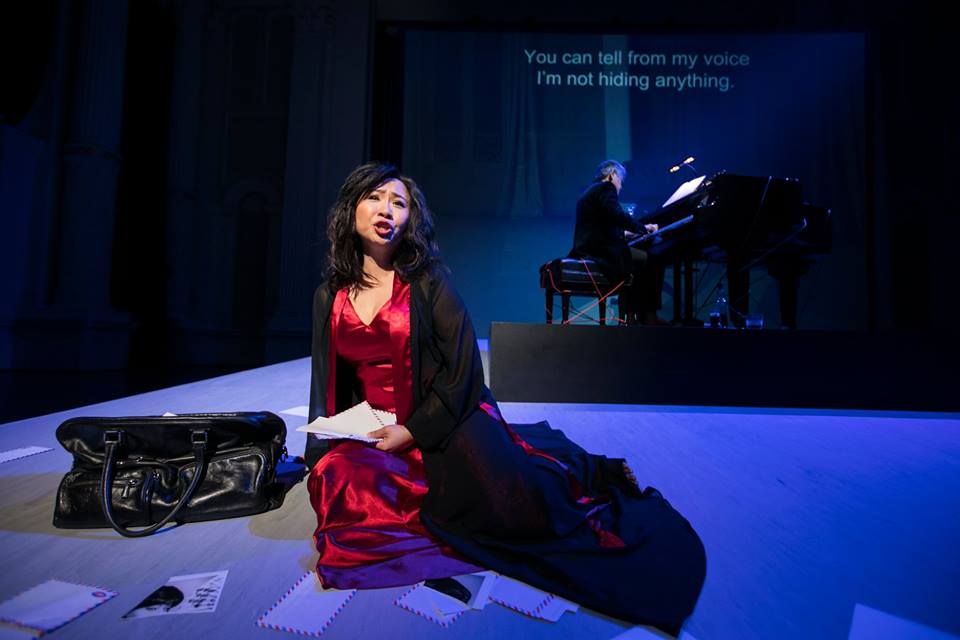 Providing both music and acting as the visual representation of her unnamed lover, pianist Shane Thio is seated front and centre of the stage with a piano ominously tangled up in red phone cord, and handles Poulenc’s erratic score with aplomb and bringing out the score’s almost human-like movements and tones. The red phone cord is a particularly outstanding design choice, standing out against the ebony piano, and well representing the complicated, passionate relationship and bold, fiery feelings that go into Elle’s conversation, as she speaks of blood, death and overwhelming emotion. Shane In addition, Shane is not simply a complement for Jennifer Lien’s performance, but an active presence she speaks to and interacts with, a call and response to her voice. Both share a strong onstage chemistry that elevates the opera from a simple monodrama to a moving, all too familiar scene of the last strings of a relationship snapping in real time. There is a palpable tension in the air as Jennifer balances singing to Shane, who ignores her advances, and forcefully roaming the stage, popping pills and raging to the audience.

For all the passion Elle displays, it’s an effort that ultimately ends in failure for her as she crumples up into a heap, her cries of ‘I love you’ fading each time. As this happens, her own vision is failing, as the image of her lover onscreen blurs, feeling as if he is moving further and further from her, both physically and emotionally. La Voix Humaine is a simple but powerful story of human connectivity, and under Ivan Heng’s direction, the full extent of its intense passion and agony is devastatingly brought to life. Unforgettably tragic, La Voix Humaine is all about opera made accessible, leaving us shaken and disturbed as we left the hall, turning to our phones and wondering if it truly has brought us any closer, or only created a new kind of distance separating us further than ever before.