Strindberg’s classic is re-appropriated to complicate issues of identity and the mutability of class in this new adaptation.

In watching Nelson Chia’s adaptation of August Strindberg’s Miss Julie, there’s a scene from late animator Satoshi Kon’s film Paprika that came to mind: in the opening sequence, we see the title character’s reflection split across multiple mirrors, each displaying a different expression. In a similar way, Nelson has made the unusual choice to cast a total of nine actors to play just three characters in Pissed Julie, each appearing as different facets of the same psyche, and suggesting how our identities are subject to change and far more complicated than our external appearances first let on.

First presented last week as part of the ongoing 2018 Macau Arts Festival, Nine Years Theatre has translated the original work into a mix of Mandarin and Cantonese, working in tandem with the new setting of motorsports season (a familiar, upper class event in both Macau and Singapore) to link the issues it raises to both Macau and Singapore. In the absence of her Count father, the wild and independent Julie (Kate Leong, Mia Chee and Jean Toh) transgresses her aristocratic status as she stumbles into her manor’s kitchen, flirting with senior valet Jean (Leong Fan Kai, Hang Qian Chou and Timothy Wan) and encountering his betrothed fellow servant Christine (Flora Ho Chi Iao, Mandy Cheang and Neo Hai Bin). As the night wears on, their conversations begin to oscillate between dangerous seduction to high tension arguments, as they ponder on the nature of dreams and formulate a plan to leave once and for all. 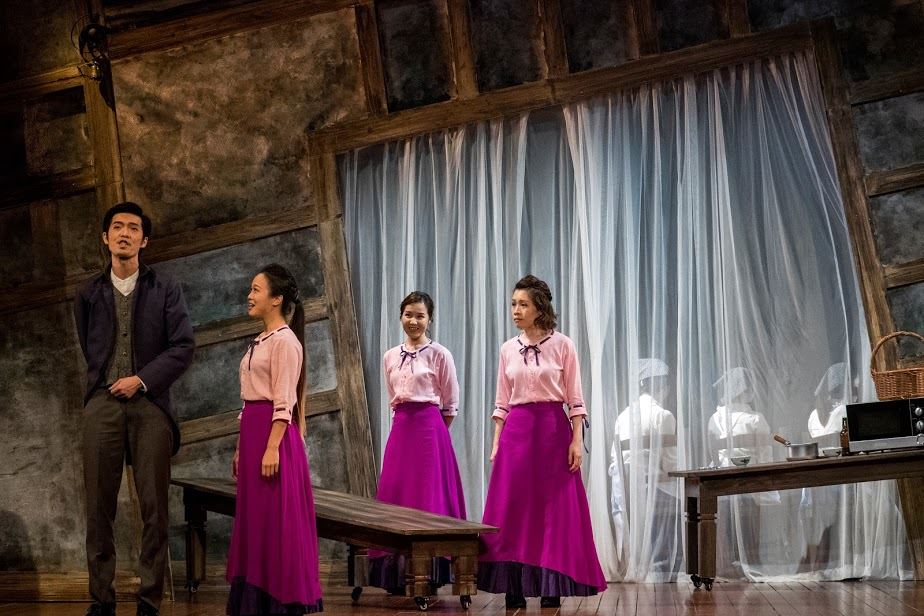 In its time, Miss Julie was considered outrageous and offensive for its controversial stance on class, suggesting that class was a social construct and soon to be eviscerated by the changing social landscape. In Nelson’s version, this is taken one step further by suggesting identity itself is a social construct by drawing out the various differences in performance of all three characters. One could interpret this as a means of diluting the concept of identity as having a fixed form, in that it comprises an amalgamation of multiple elements, beyond class, language, nationality, or in the case of Neo Hai Bin as Christine, a different gender.

Because of how each set of three actors play the same character, Pissed Julie then begs the question of what makes each of us truly unique, and that while our outward appearance and presentation may be varied, there is something deeply primal and unbound from social rules that makes up our character. Perhaps Pissed Julie suggests that power is closely linked to one’s identity; Jean and Julie’s conversations at times veer into the abusive as they muddle their class through role-play, taking pleasure in the momentary power each possess as they command each other and sexual lust becomes intimately entangled with power lust. 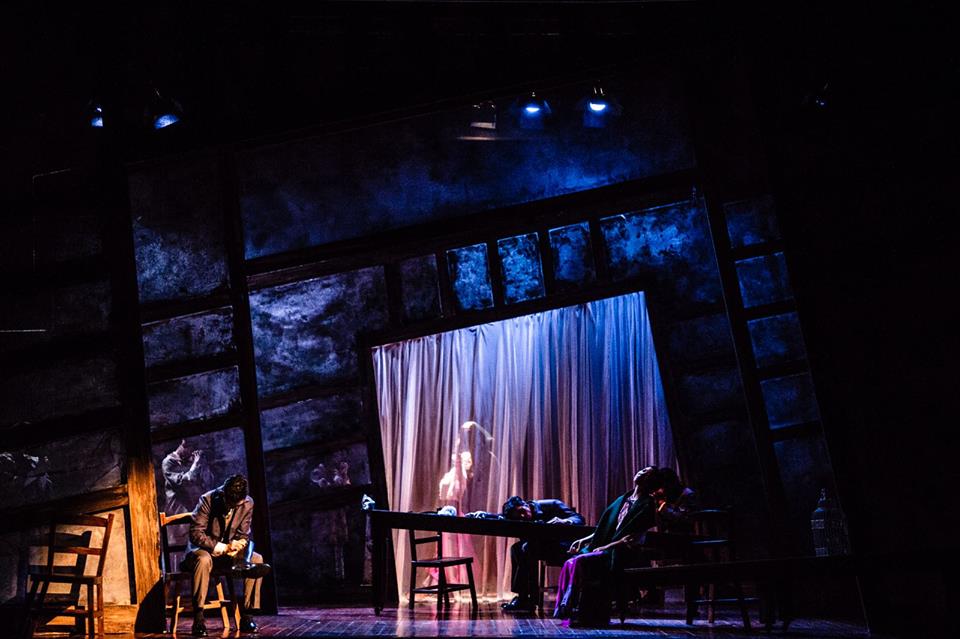 Nelson plays to his strengths here as an ensemble director – each mini-ensemble of actors are in sync with each other, amplifying every emotion and tension felt each time all of them are onstage by threefold. When all nine of them are together, there’s a fascinating visual effect created as they take turns to speak to each other, turning midway through a sentence to another actor playing the same character, emphasising the mutability of identity in this play as unfixed to position or person. As Kate Leong and Mia Chee, both as Julie, flank Neo Hai Bin, it’s the idea of feeling overwhelmed by a single, overbearing personality cleverly given form. Together, all nine of them share an undeniable chemistry that is key to the success of this unique staging, and Chia has done well to unite both the new Macanese actors and his usual Singaporean Nine Years Theatre brethren into a single cohesive ensemble.

Further eschewing the play’s naturalist origins, Wong Oi Kuok’s slant-framed set (and the corresponding slanted surtitles) immediately causes audiences to see the world of Pissed Julie as an unstable one, where neither class nor identity are set in stone, and a single choice could cause everything to change. A large translucent curtain in the kitchen is the boundary separating servitude from aristocrat, privacy from pretentious public appearance, and makes the kitchen a liminal space where one is allowed to express and debate one’s identity. Dressed in period costumes by Loo An Ni while a microwave sits onstage further throws the play’s own chronological identity into question, while Calvin Lam’s dark, dramatic lighting combined with Chong Li-Chuan’s uncanny waltzes heard throughout the play only add to the sense of unease expressed by each character. 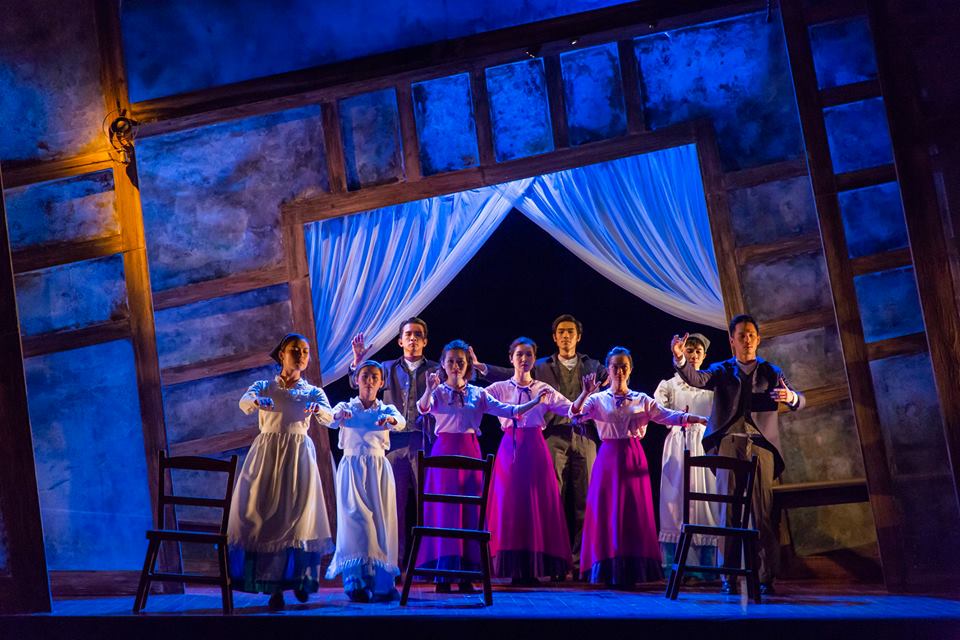 Even though Pissed Julie ends with each character seemingly having returned to their original roles, the idea that nothing has changed is subverted by creating the likelihood that change has instead occurred psychologically. There is hope for change from the rigidity of class and prescribed social roles that is evident from the way Julie dances in endless circles as the lights fade to black, a serenity on her face that suggests freedom at last from conformity and a comfort in her identity. With its bold, unique staging, Pissed Julie is a fascinating new interpretation of the Strindberg classic that questions everything one might have thought about the fixed nature of class, identity and theatre itself, leaving us assured that change can happen, as long as one is willing to take the first step and shake up the status quo.

Pissed Julie plays at the KC Arts Centre from 17th – 20th May 2018. Tickets available from SISTIC