The spirits are at play in both reality and fiction in this new work tackling issues of land ownership and the foibles of human desire.

Pu Songling’s monstrous 18th century collection of over 400 supernatural stories Strange Tales from a Chinese Studio (Liaozhai Zhiyi) has remained fascinating over the years, with its quirky supernatural characters from failed scholars to alluring fox spirits interwoven with a strong satirical edge. In The Finger Players’ Citizen Dog, co-writers Oliver Chong and Liu Xiaoyi take familiar elements from the Chinese classic and its spirit of satire into the modern world as it tackles themes such as corruption and bureaucracy in government officials, and human desire’s ability to blind and impede. 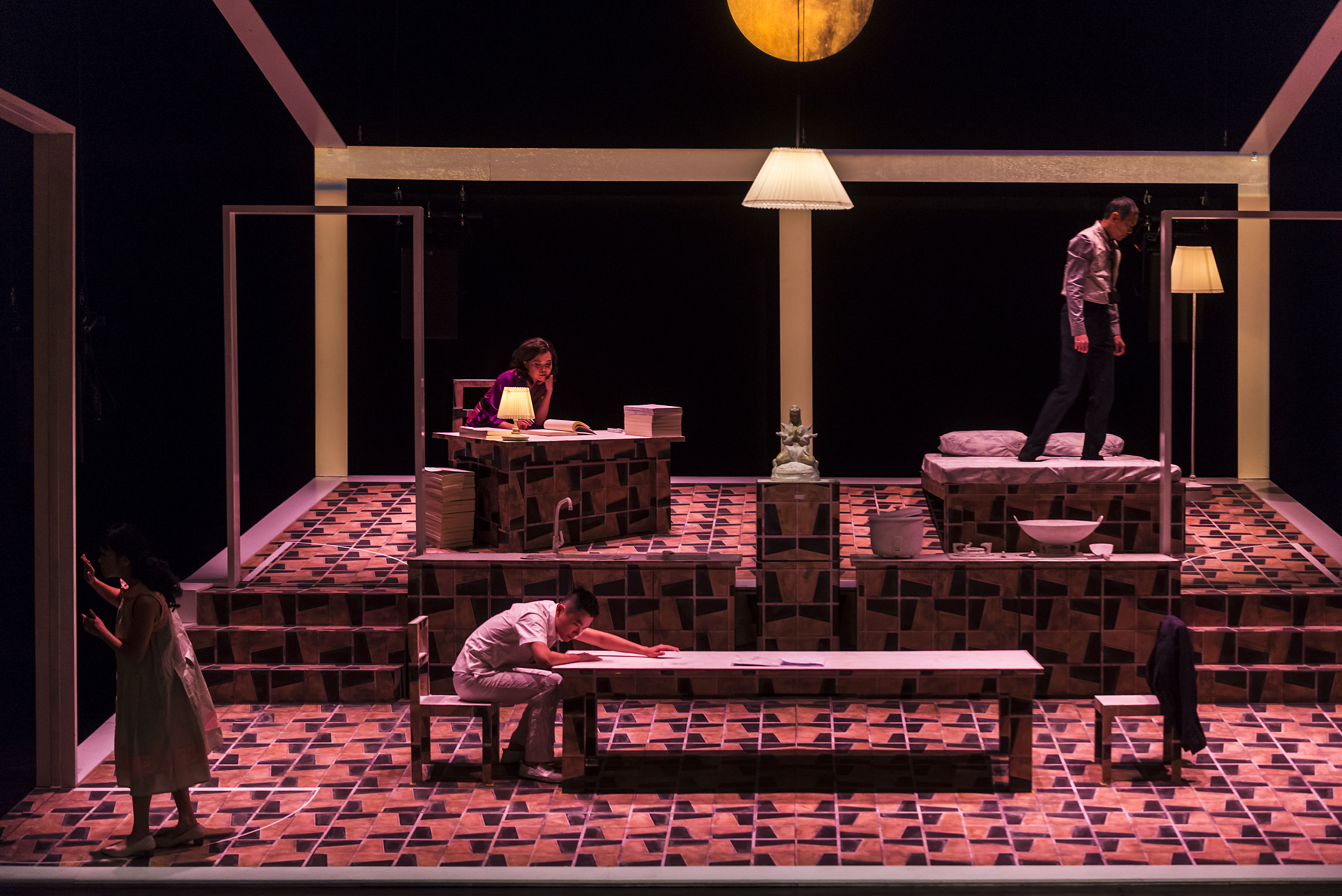 Citizen Dog was inspired by an incident where the residents of 191 private terrace houses face eviction as the land is set to return to the government at the end of 2020, effectively leaving them homeless thereafter. In the play, two parallel storylines play out: the first introduces us to writer Mr Pu (Liu Xiaoyi), who is set to be evicted from his home. In dealing with his eviction, Mr Pu comes face to face with characters such as corrupt land authority official Bai Jia (Alvin Chiam, who, in playing the role takes a perverse glee in humiliating Mr Pu), and seductive ‘foreign talent’ masseuse Ah Xiu (a smooth, sultry Li Xie who fully commits herself to the role), who shows up to rent a room. The second storyline takes place within Mr Pu’s mind, as he writes these situations into a story surrounding happy-go-lucky Xiao Cui (a very animated and otherworldly Jo Kwek), who finds herself faced with a similar eviction. Her solution instead is to move into her corrupt land authority official’s house in return for tutoring his hapless son (also Liu Xiaoyi, who differentiates and transitions well between Mr Pu and the son’s physicality and speech). Nothing is as it initially seems, and as characters undergo increasingly traumatic encounters, they shed their appearances to reveal far darker and disturbed personality traits. 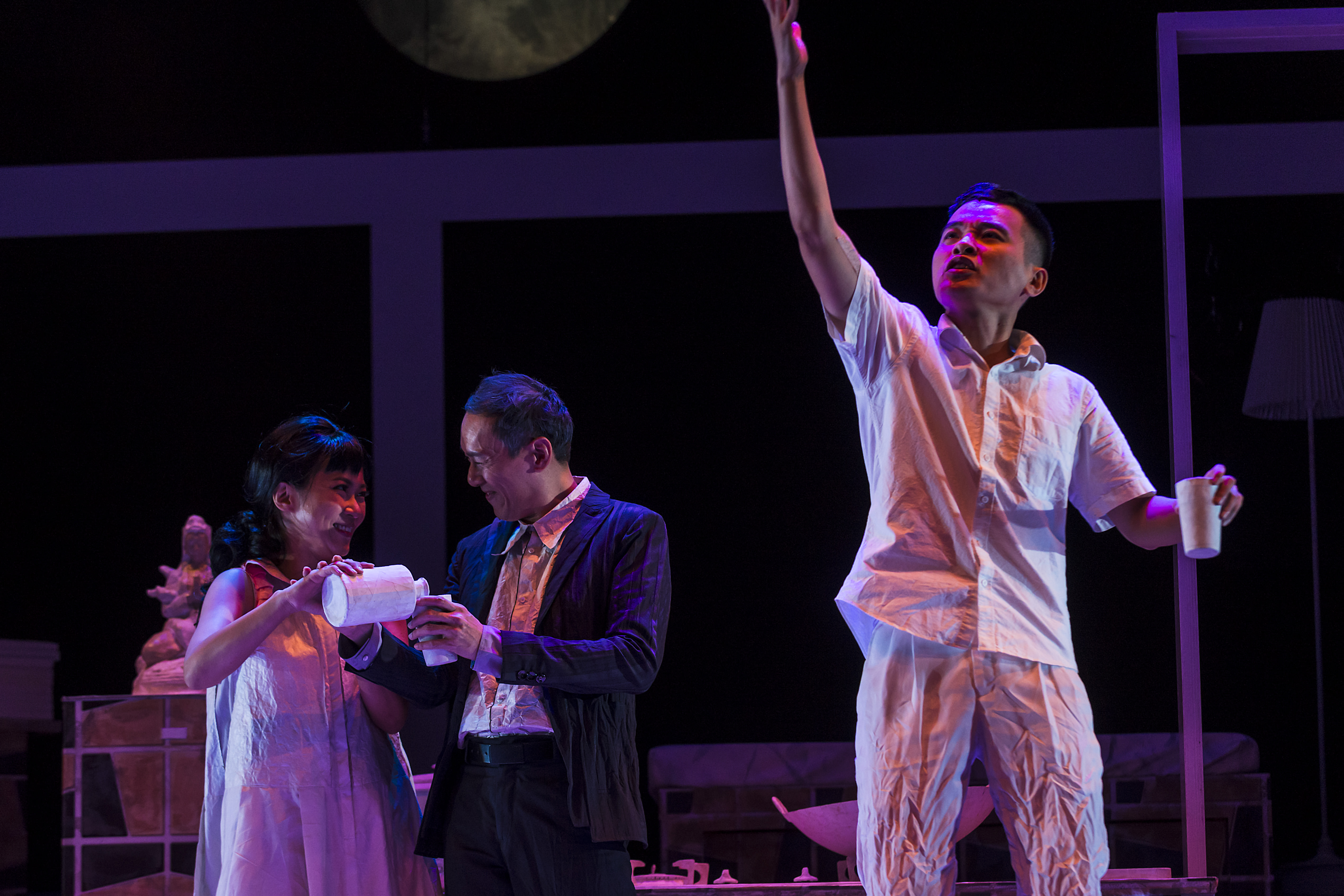 Citizen Dog opens on an ominous note, with a full moon (realistically detailed down to individual craters) above the stage while the cast lays about the set in various states of restful disarray. As this moon begins to wane to a crescent with each transition, one hears tidal waves crash distortedly over the sound system, and its presence projects the feeling of a darkness eclipsing the entire performance. One feels the lunar cycle even suggests a kind of inescapable fate, predestining its characters to live and relive the same cycles and destinies in every reincarnation. The parallels between reality and fiction are seen when the opening scenes for each create a deja vu effect as they almost unfold in exactly the same way. Soon, it feels as if Pu loses control of the writing, with fiction guiding reality itself. 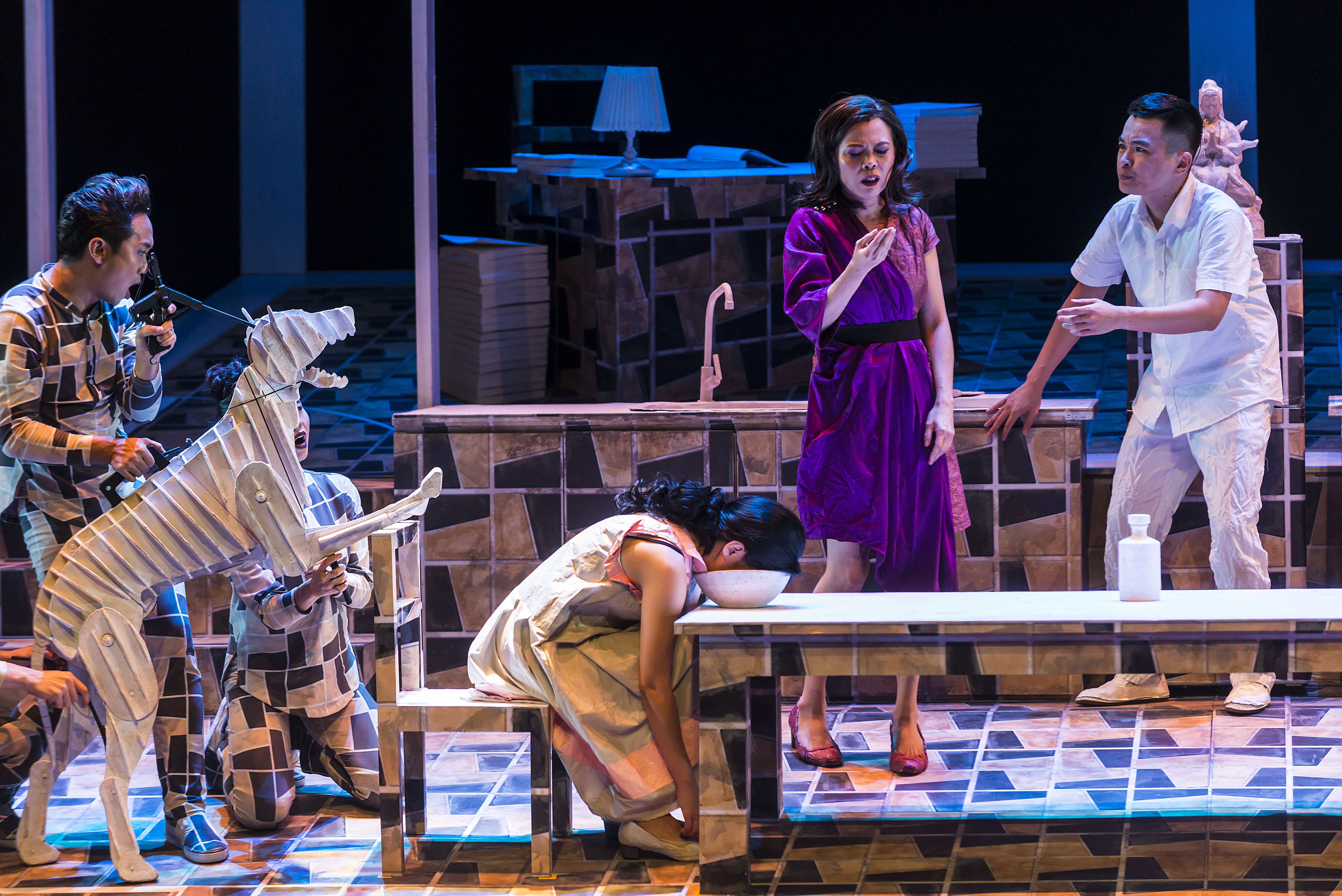 With this surreal world set in place, the eviction plot is quickly overshadowed by the play’s mysterious happenings, shifting the focus from the political to the human as it tackles characters’ intense desires, lust and its interrogation of the need for companionship in an increasingly cold and hostile world. One feels a sense of melancholia and isolation emanate from the characters, each one unfulfilled and unsatisfied in one way or another. Perhaps this stems from their unsuccessful attempts to flee from their predicaments, be it the reality of eviction or the trappings of something supernatural, dooming them to repeat their academic failures or romantic ties over and over again. Even if they do exact some kind of change, it comes at a heavy sacrifice, and only leaves them worse off than before, and it is this realisation that we ourselves might be trapped in some kind of eternal nightmare that truly unnerves us. Alongside gory moments and simulated sexual scenes, Citizen Dog echoes the abrasive horror and lustful elements lifted from its source text. 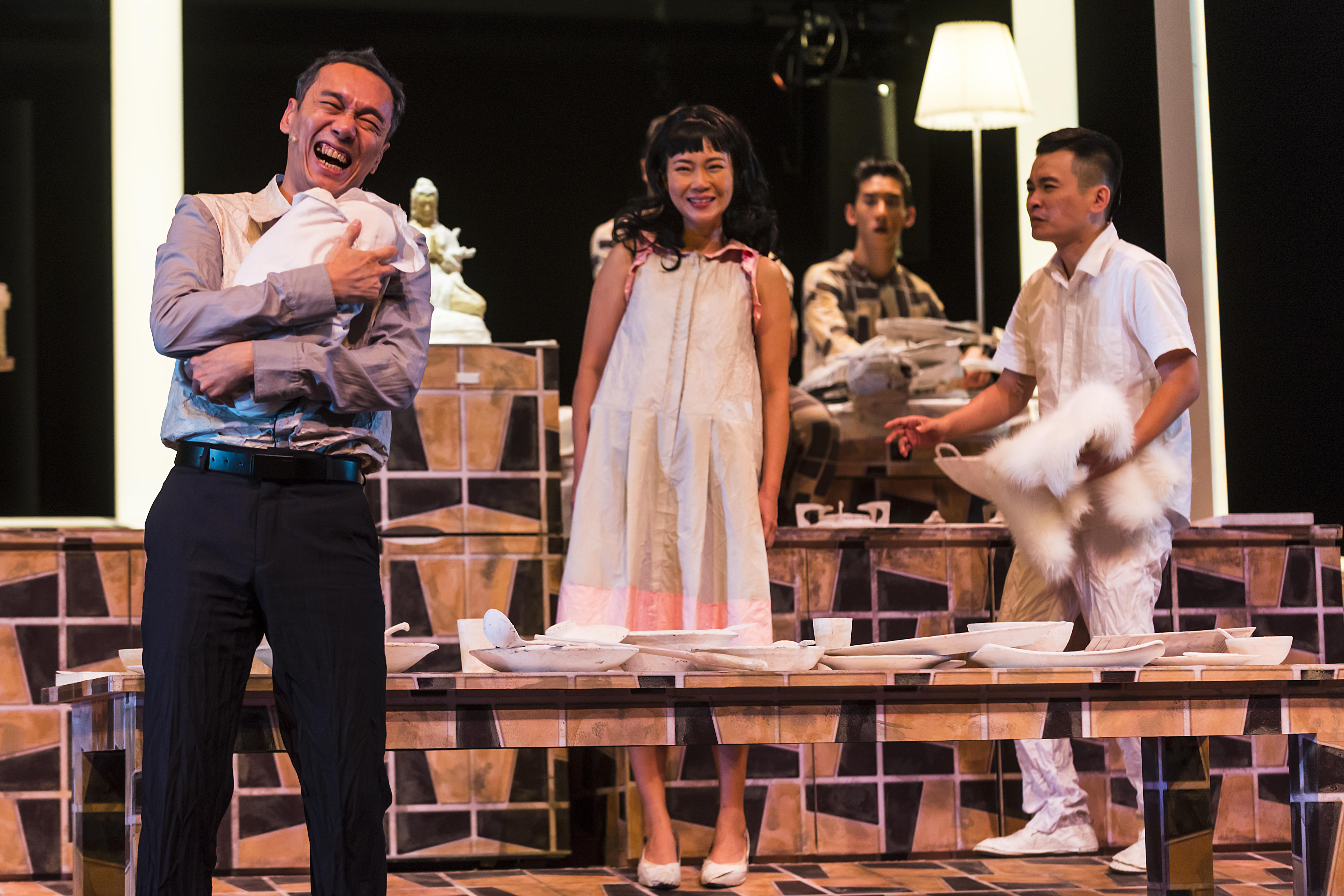 Oliver Chong has crafted a set that slopes down towards the audience at a ten degree angle, a challenge for the cast to manoeuvre and maintain their balance as they navigate their way around each scene. There is so much detail that has gone into every design aspect of this play – dry ice, for example is used to create the impression of steam escaping from a boiling pot of soup. Sound designer Darren Ng’s ritual-like music plays throughout, creating a constant uneasy, otherworldly atmosphere. Startlingly realistic incidental sound effects are also well utilised to build the play’s world, such as precisely timed sounds of doors opening and shutting to running water from a tap. Lim Woan Wen’s dramatic lighting is most effectively used in Citizen Dog’s absurdist, stylised scenes, such as a climactic fight in slow motion towards the end of the play, or the creepy atmosphere created when Xiao Cui performs an unforgettably horrific and hilarious surgical procedure with household stationery and cutlery. 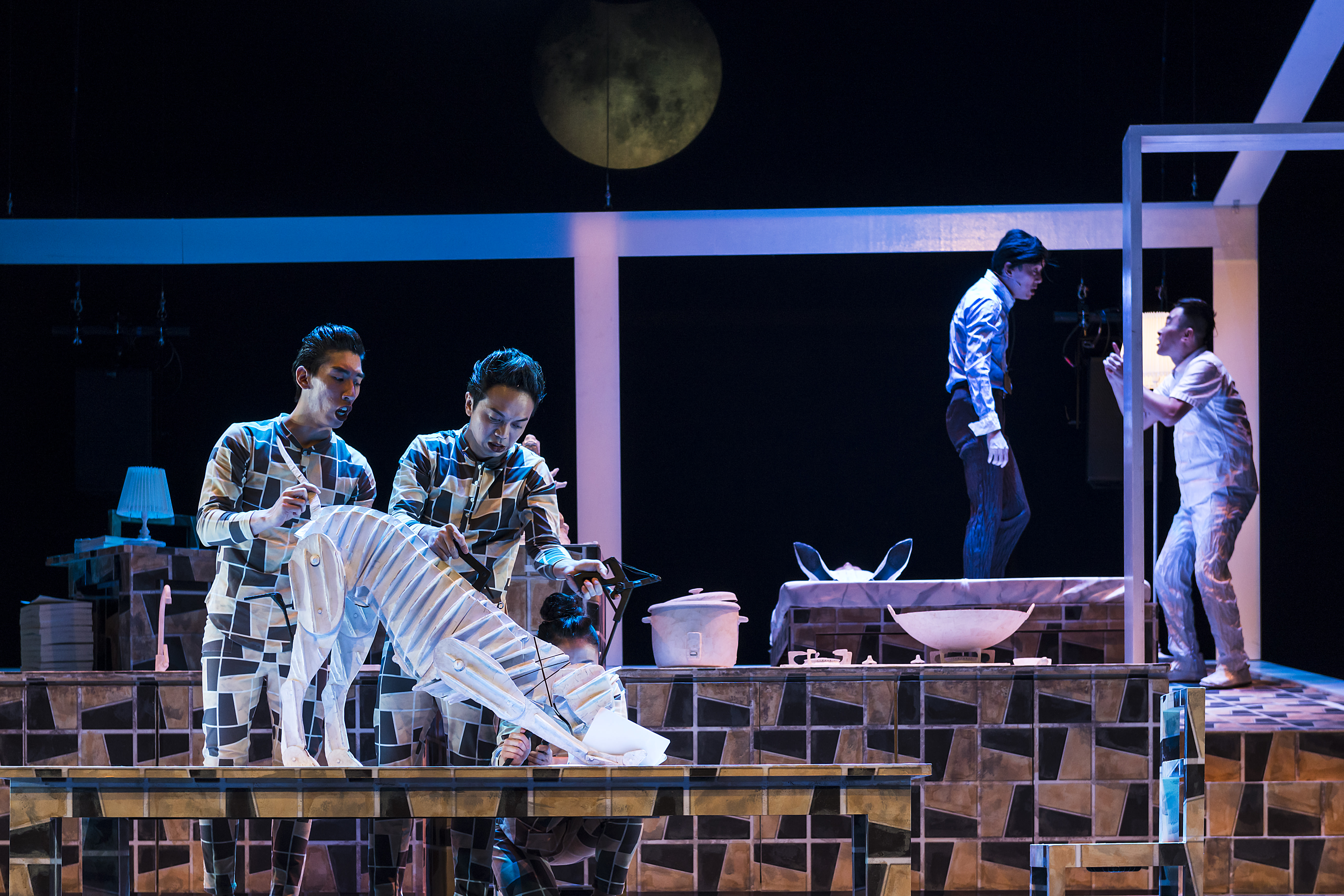 Above all, it is the white dog puppet co-designed by Oliver Chong and Jack Chen of tsai design that steals the show in every scene it appears in. Controlled by a three-man team comprising Darren Guo, Ann Lek and Trey Ho, there is so much effort that goes into puppeteering this creature, from the way it leaps from floor to table, to the way the dog speaks, unabashedly foul-mouthed as it barks criticism and howls in hunger (encapsulated by its skinny, skeletal body). The puppeteers sync their voices and movements perfectly, realistically echoing the way an actual dog walks and behaves, catching every detail right down to the wagging of its tail, and this sassy but fiercely loyal creature is often a welcome source of comedy amidst the darker elements of the play. Yet despite its devotion, its barks fall on deaf ears, and one feels sympathy for this animal trying its best to protect its owners in any way possible, yet powerless to do anything about it (a helplessness we ourselves experience in much of daily life). 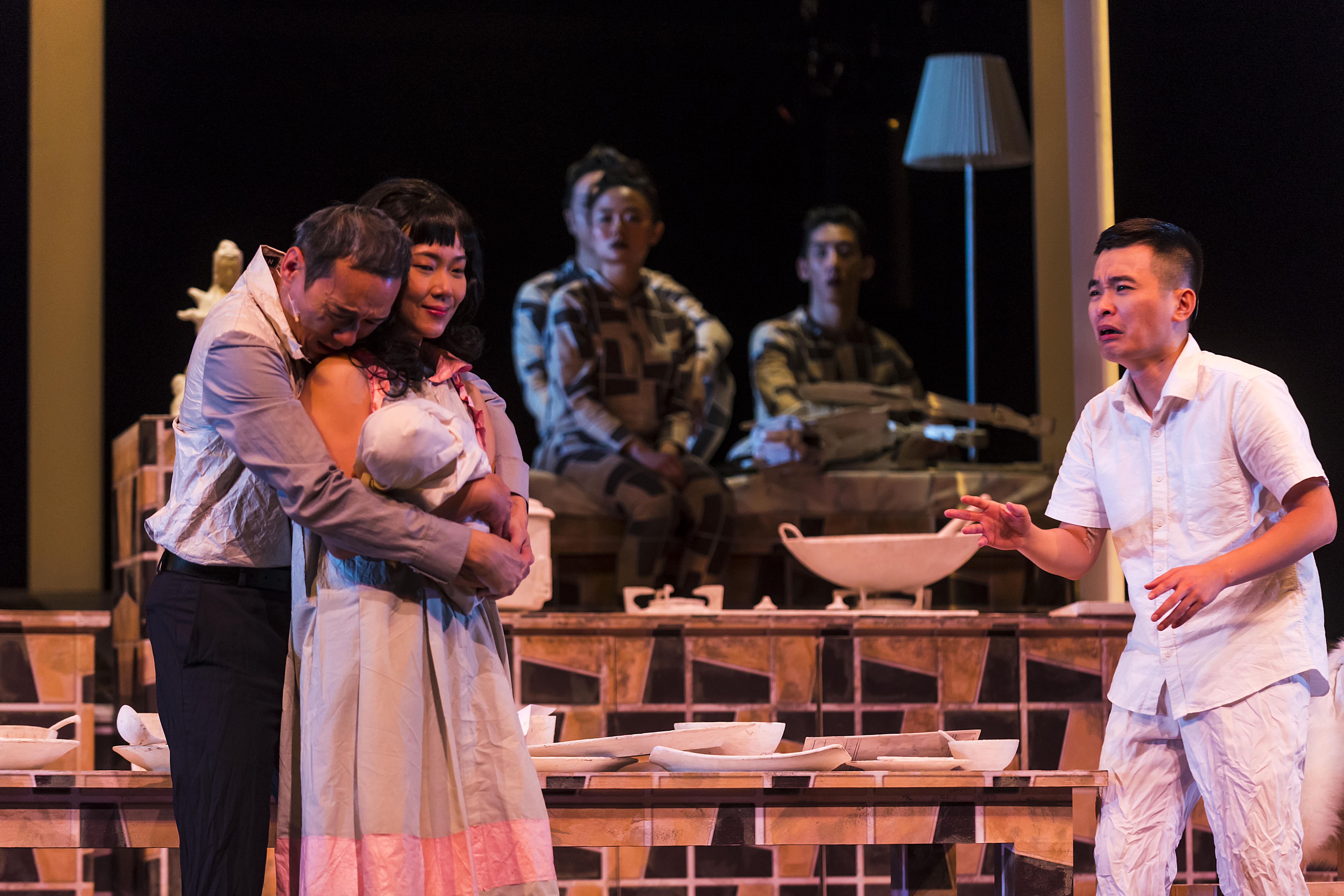 Alongside its strong cast and thought provoking story, Citizen Dog is a masterful showcase of design done right, every element coming together to formulate a visually arresting performance that captures the supernatural charm of Liaozhai. Citizen Dog is a show that will draw you into its mad world at the start and by its end, spit you out disturbed and devastated by the events that transpire within this odd house’s four walls, and leave you in want of a companion, human or canine, to find solace and comfort in.

0 comments on “Review: Citizen Dog by The Finger Players”