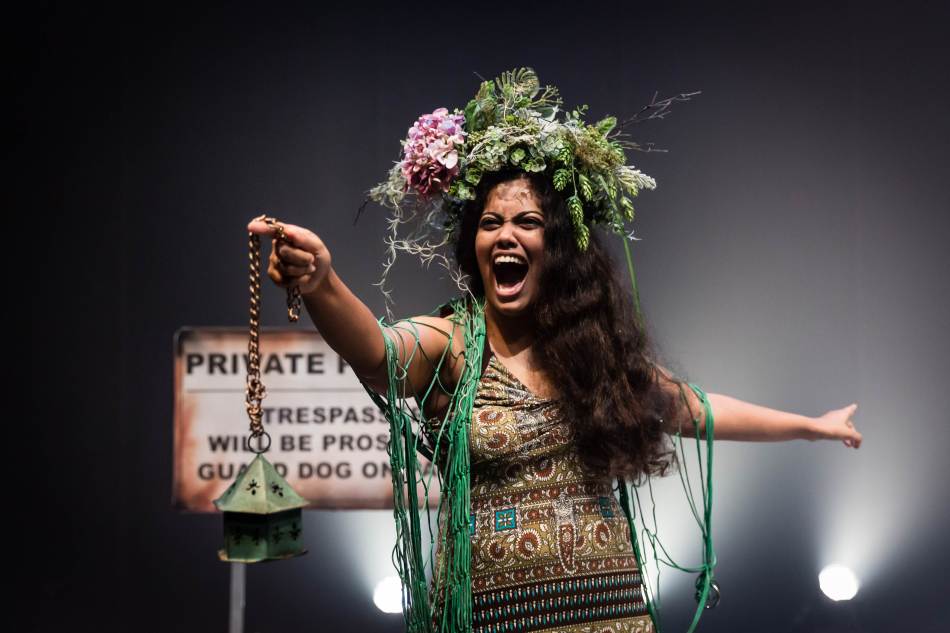 A surreal cast of quirky characters and a final emotional gut punch in one of ITI’s most light-hearted shows.

For many people, growing up can feel like an odyssey, with countless perils to face in adolescence as one becomes increasingly exposed to the cold, cruel world around them. In the case of Vijay Tendulkar’s The Cyclist, growing up becomes a literal journey, as we follow a protagonist choosing to break away from her doting parents’ care when she sets off on her own solo adventure, armed only with her trusty bike, a backpack of supplies, and her mother’s advice. 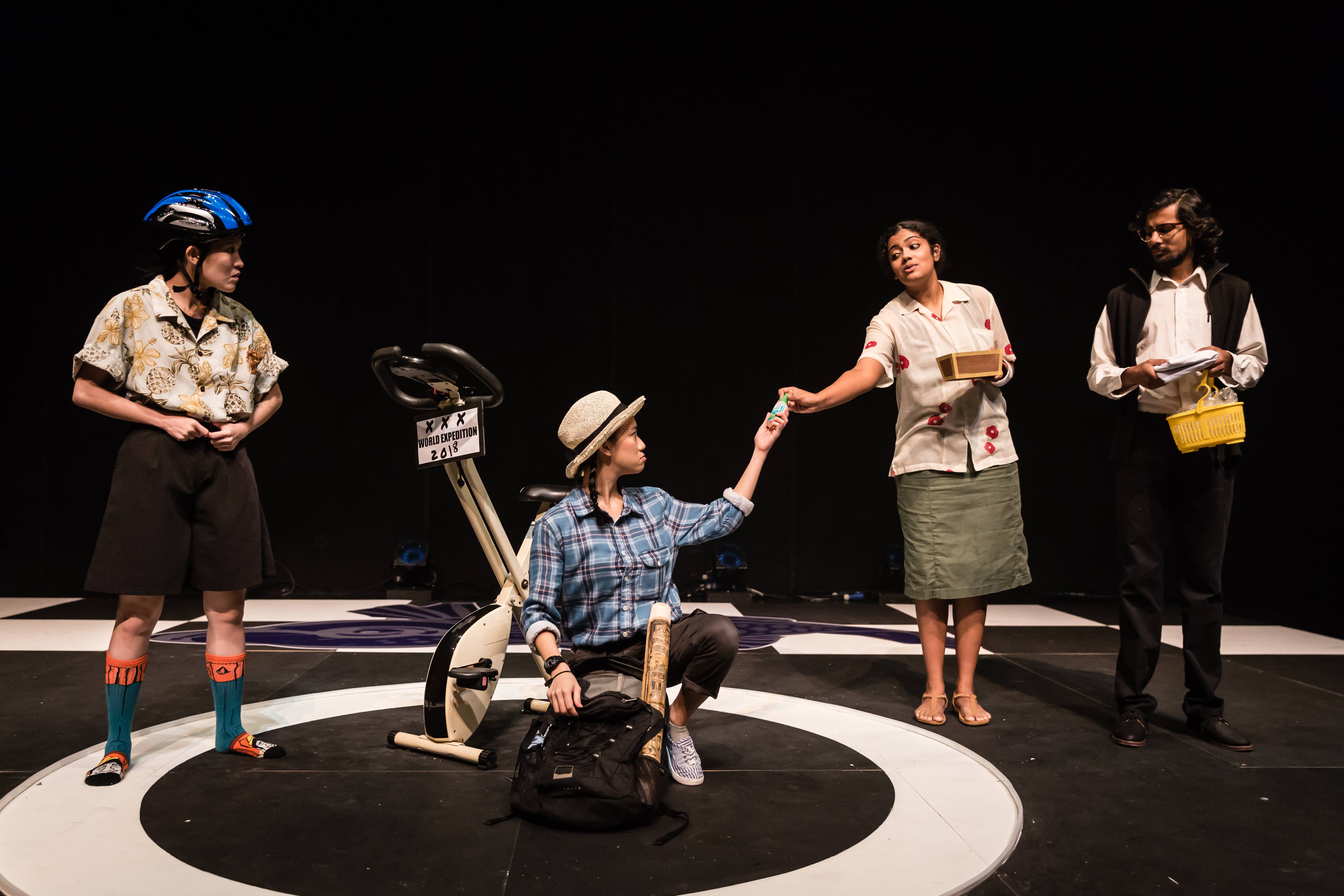 Performed by the graduating batch of Intercultural Theatre Institute students and directed by Noushad Mohamed Kunju, The Cyclist is by far, one of ITI’s most light-hearted plays, taking the form of an Alice in Wonderland-like bildungsroman, as one quirky character after another is introduced in each scene, each presenting their own unique idiosyncrasies and absurd humour not unlike a Monty Python sketch.When one first enters the Drama Centre Black Box, instead of the usual entrance, one is led around the back through the outdoor area, lending a sense of potentially entering an unknown world to the pre-show mood. Noor Effendy Ibrahim’s set, while sparse, is also claustrophobic, with black and white squares reminding one of a chess set with fixed ways of moving and signs laid flat to suggest a set of rules where one can or cannot go, further emphasising and evoking the need to escape this monochrome world of hard and fast laws. 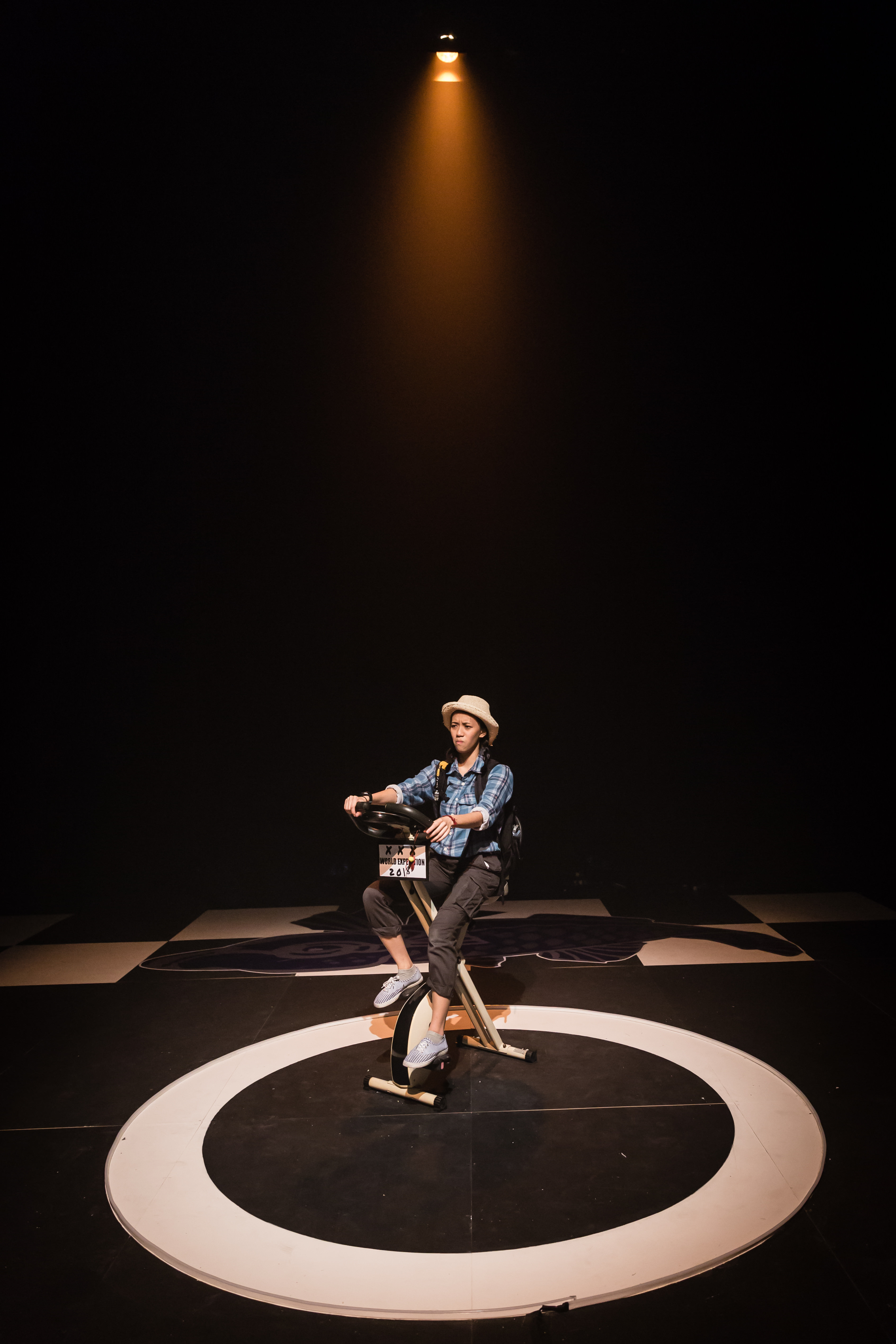 Playing the eponymous cyclist is Caroline Chin, who wears an almost constant expression of perplexity as she encounters increasingly bizarre denizens on her road trip to nowhere. Pedalling away at her stationary bike encased in a white circle, the notion that such a static act can physically take her anywhere already hints at the rest of the play’s absurd humour still to come. While it takes some suspension of disbelief to fully buy into Caroline’s portrayal of purity and innocence as a child on the brink of adolescence, there are plenty of moments during her performance which feel almost transcendent with the way her character jars against the over the top characters she meets, particularly when her character is allowed to join them in their strange rituals and speech patterns. Throughout The Cyclist, one feels constantly in danger, as if always trespassing on another’s domain with the sheer amount of danger and hostility faced by the cyclist, hammering home the idea that adulthood has become treacherous territory, often confusing, illogical and above all, terrifyingly alone. 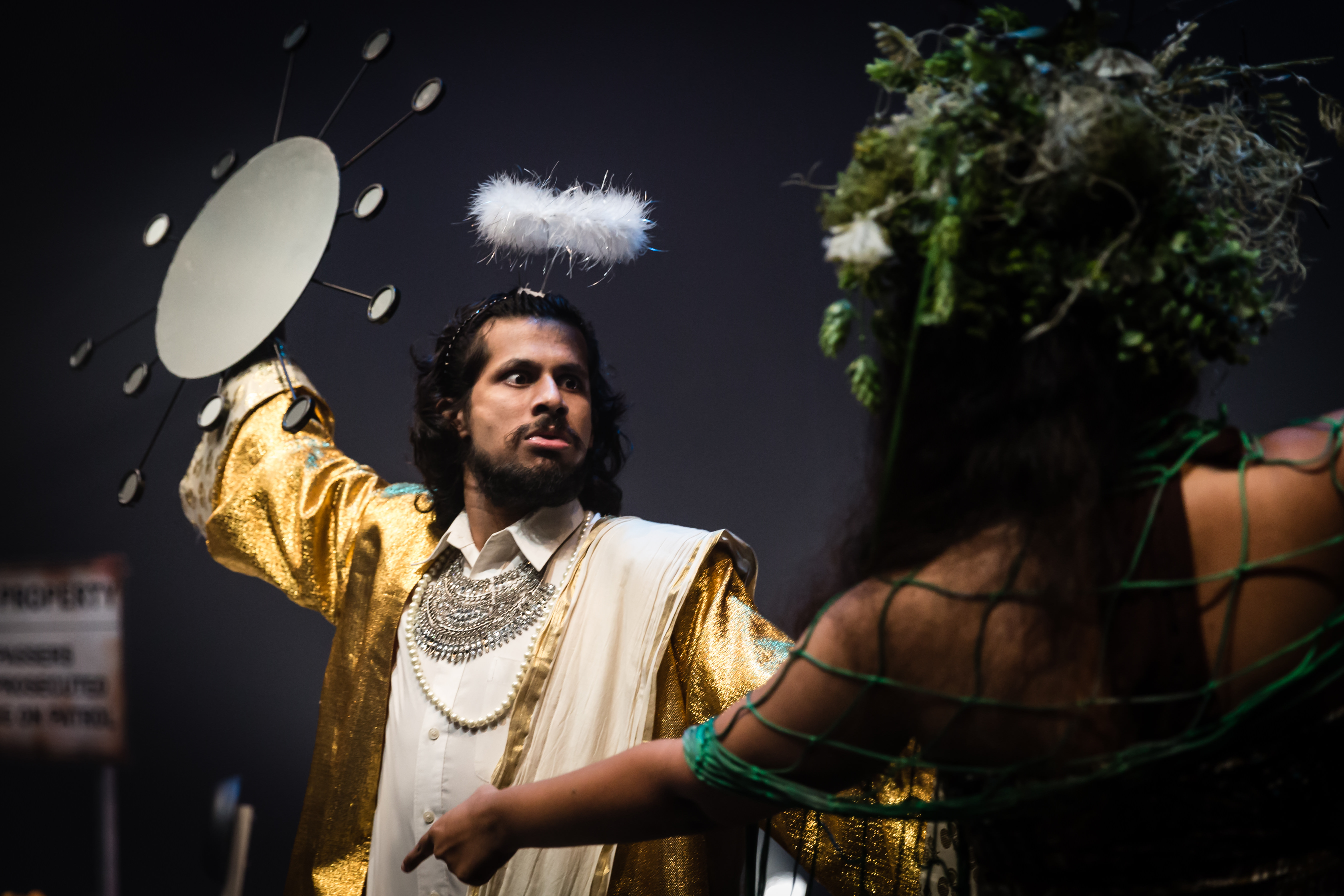 The remainder of the characters are played by Han Guei Sze (Zizi), Pooja Mohanraj, and Lakshmana KP. Pooja and Lakshmana are a joy to witness each time they appear onstage, sharing incredible chemistry with each other whether playing the cyclist’s melodramatic parents, or a pair of celestial beings engaged in a bitter war with each other. Unlike their previous, more serious roles in When We Dead Awaken,The Cyclist truly allows both actors to access their silly sides. Though ridiculous, their roles are also by no means easy – the range of characters they play are each differentiated by voice and physicality, and require an abundance of energy as they attempt to push each portrayal far and above what would be considered ‘normal’. Highlights from their performances include a fast-paced rap-like battle between two celestial lords and spectral ghosts pulsating to a techno-inspired soundtrack, to a psychologically-inclined bandit and even a sultry, effeminate merman. The quick changes to increasingly elaborate costumes both of them accomplish in the short span of time between each scene is impressive, and this is a production that proves both actors’ capability to clinch comic timing and laugh out loud humour. 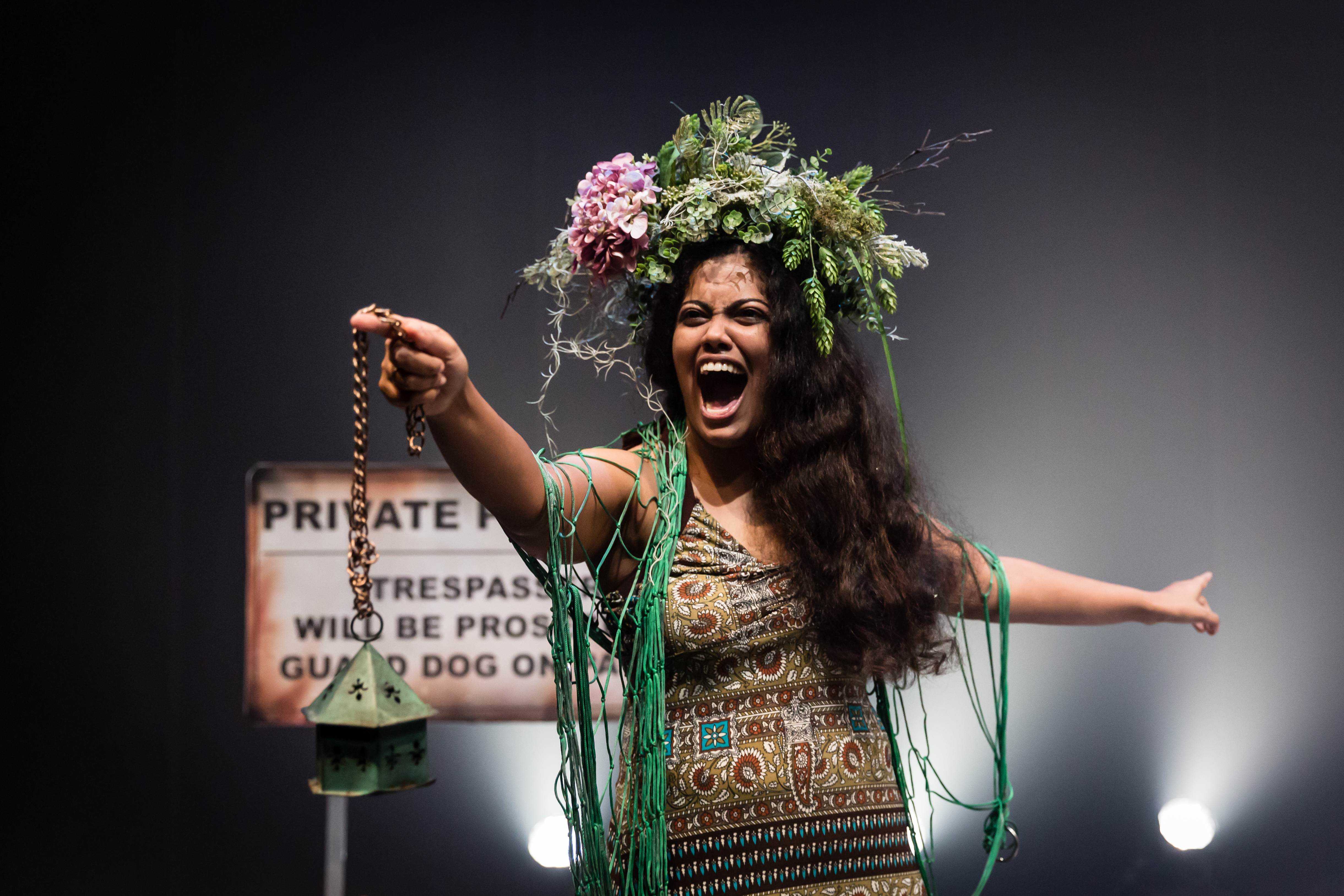 Although Hau Guei Sze’s characters are not given as much of a chance to revel in absurdity as Pooja and Lakshmana’s, there are a number of moments where she does shine through her physicality – as an errant lion, she crawls, cat-like across the stage, while performing alongside Lakshmana as a ghost, provides comic elements with her arms alone as she raises them dramatically to resemble a confident, heavyweight boxing champion, in spite of her otherwise tiny frame to create humour in juxtaposition. 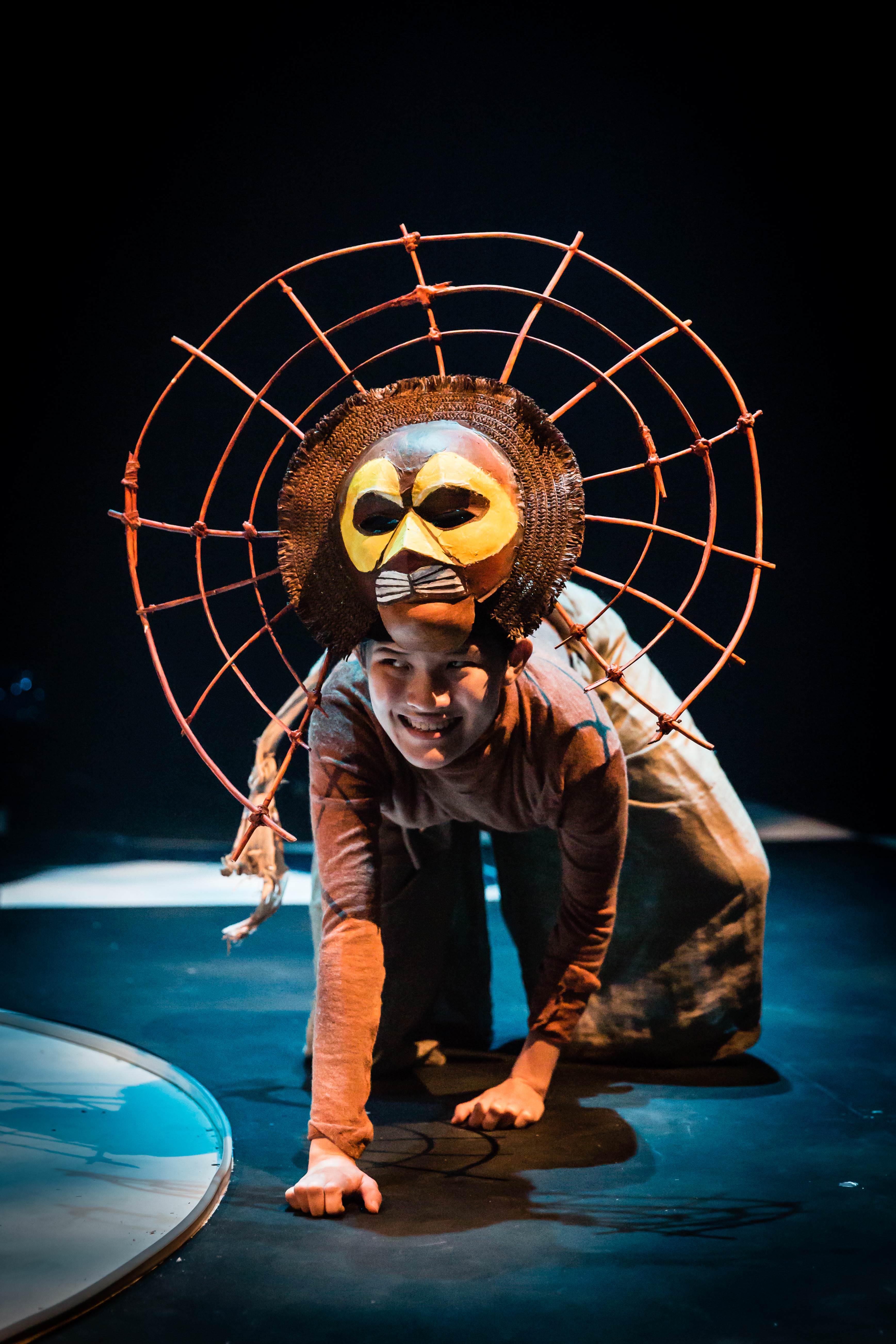 Part of the enjoyability of The Cyclist boils down to its design elements, particularly the dream-like moments where we see the cyclist alone in her own thoughts. Scored to an eclectic soundtrack by director Noushad, ranging from Vivaldi’s Four Seasons to uptempo techno dance music, the cyclist’s relentless pedalling matches the pace and rhythm of the soundtrack each time, and assisted by Raphaela Chan’s evocative lighting, each of these solo scenes become a visually and aurally arresting affair, where our minds slow or quicken to the speed of the chosen track. 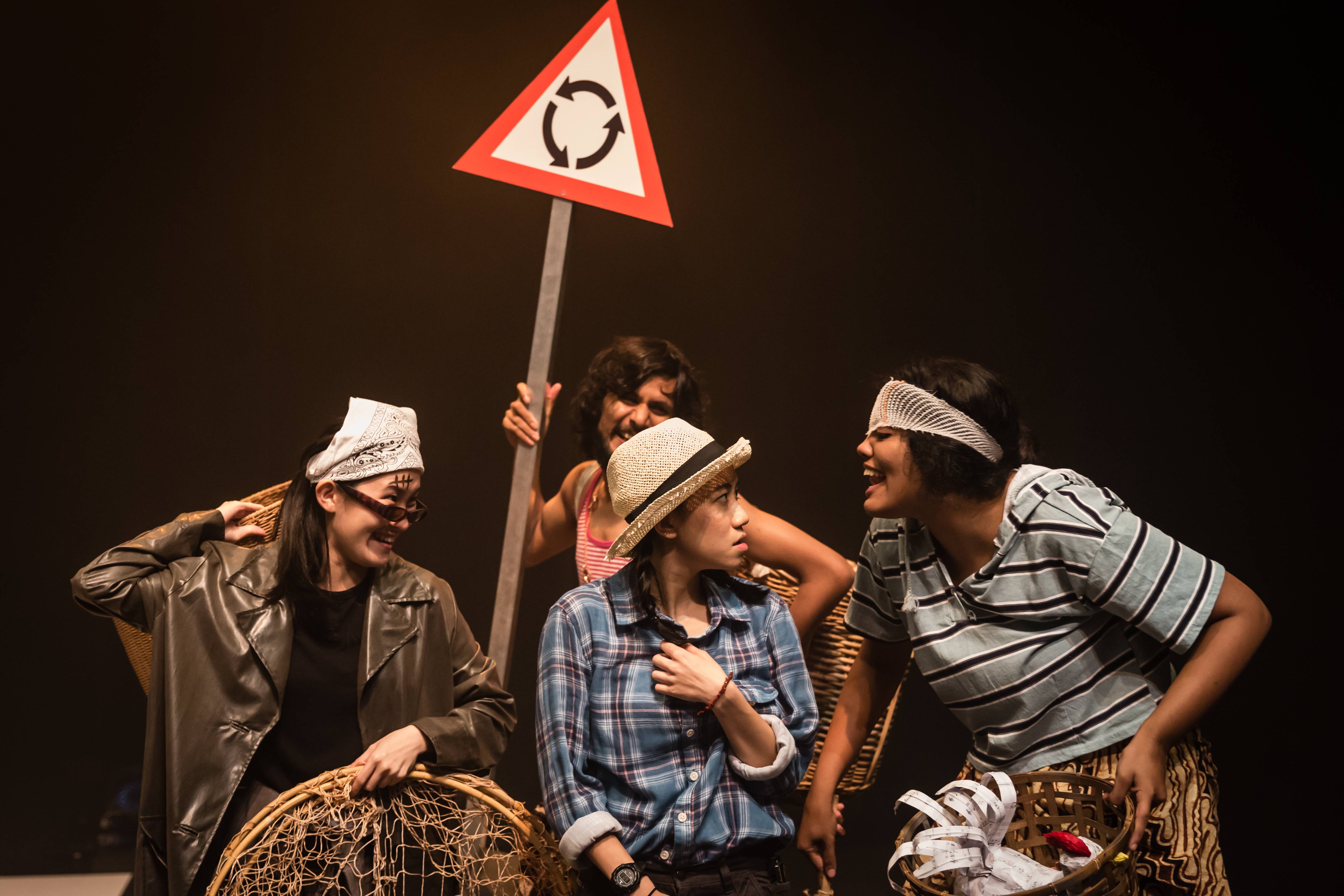 In all, The Cyclist is a promising second production for this year’s graduating batch of ITI students, and is a welcome shift in tone to showcase their acting range. For all its absurd comedy, The Cyclist eventually delivers an emotional gut punch in its final moments. Despite coming seemingly completely out of left field, it is a surprisingly effective move that gives greater weight to all the absurd characters the cyclist meets throughout the play, and adds depth to the play beyond comedy alone. No doubt, the journey towards adulthood is fraught with dangers, and one is ultimately left wondering about whether the price of independence is truly worth the sacrifices one makes in the process.
Photo Credit: Bernie Ng
Performance attended 28/6/18
The Cyclist plays at the Drama Centre Black Box from 28th – 30th June. Tickets available from Peatix

0 comments on “Review: The Cyclist by Intercultural Theatre Institute”