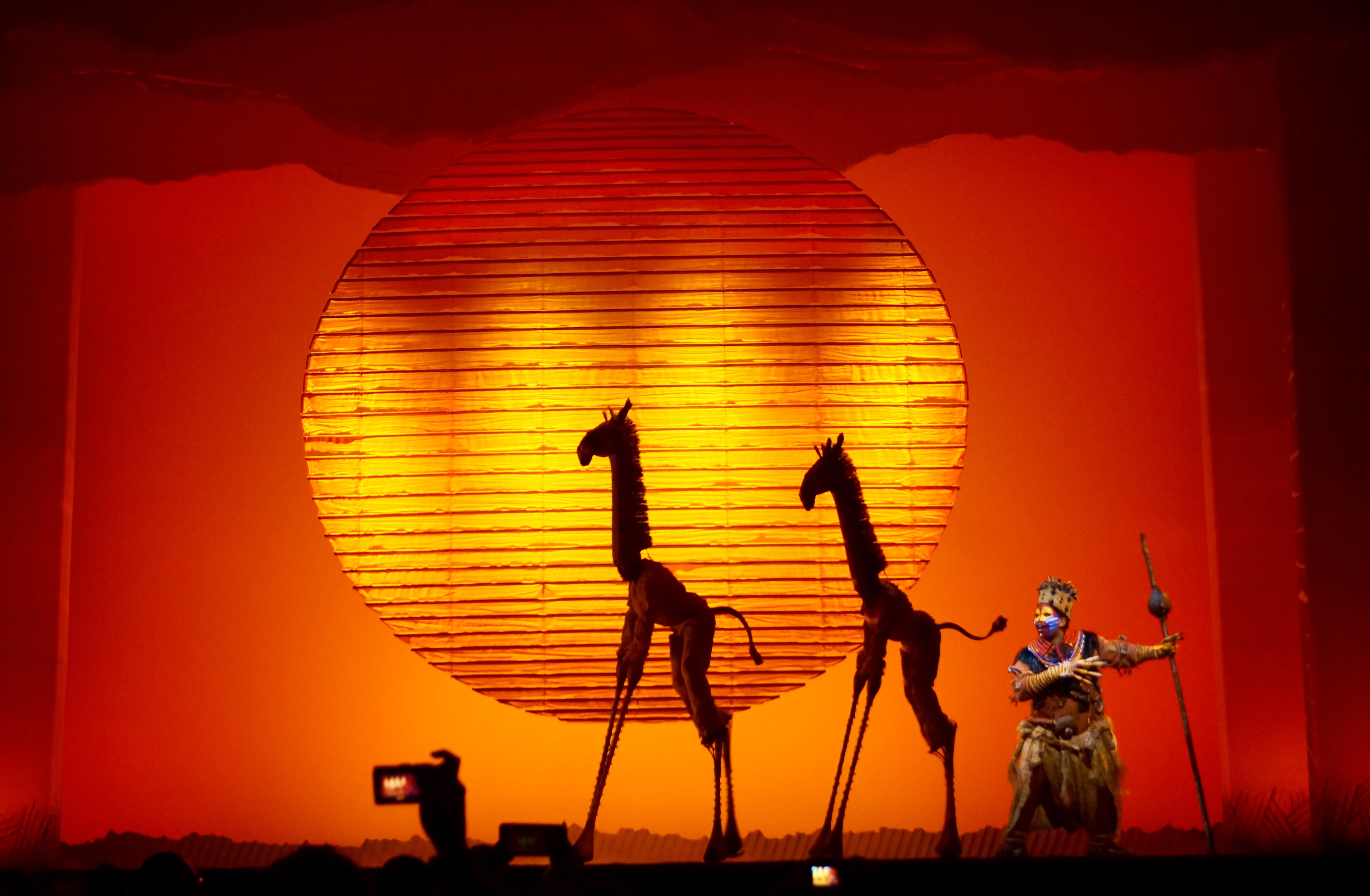 Over the years, Marina Bay Sands has seen countless productions grace its theatres, ranging from the best touring productions from Broadway and the West End to the strongest performers from around the region. But one production that will always have a special place in audience’s hearts would be the very first one. That production is Disney’s The Lion King, which saw a welcome return to the Sands Theatre this week, seven years later after it became the first production to show perform at Marina Bay Sands back in 2011.

Adopting the subtitle ‘The World’s Number 1 Musical’, The Lion King is based off the 1994 animated film of the same name, and went on to win six Tony awards after opening on Broadway in 1997 along with over 70 global awards. The musical becoming renowned for its breathtaking visuals inspired by the African savannah, over 200 animal puppets based off Indonesian puppetry, spectacular choreography and its timeless tale, with characters each and every person will find resonance in. It’s proven to be so popular that it’s been translated into eight languages, allowing it to reach countless audiences and garner new fans from around the world. 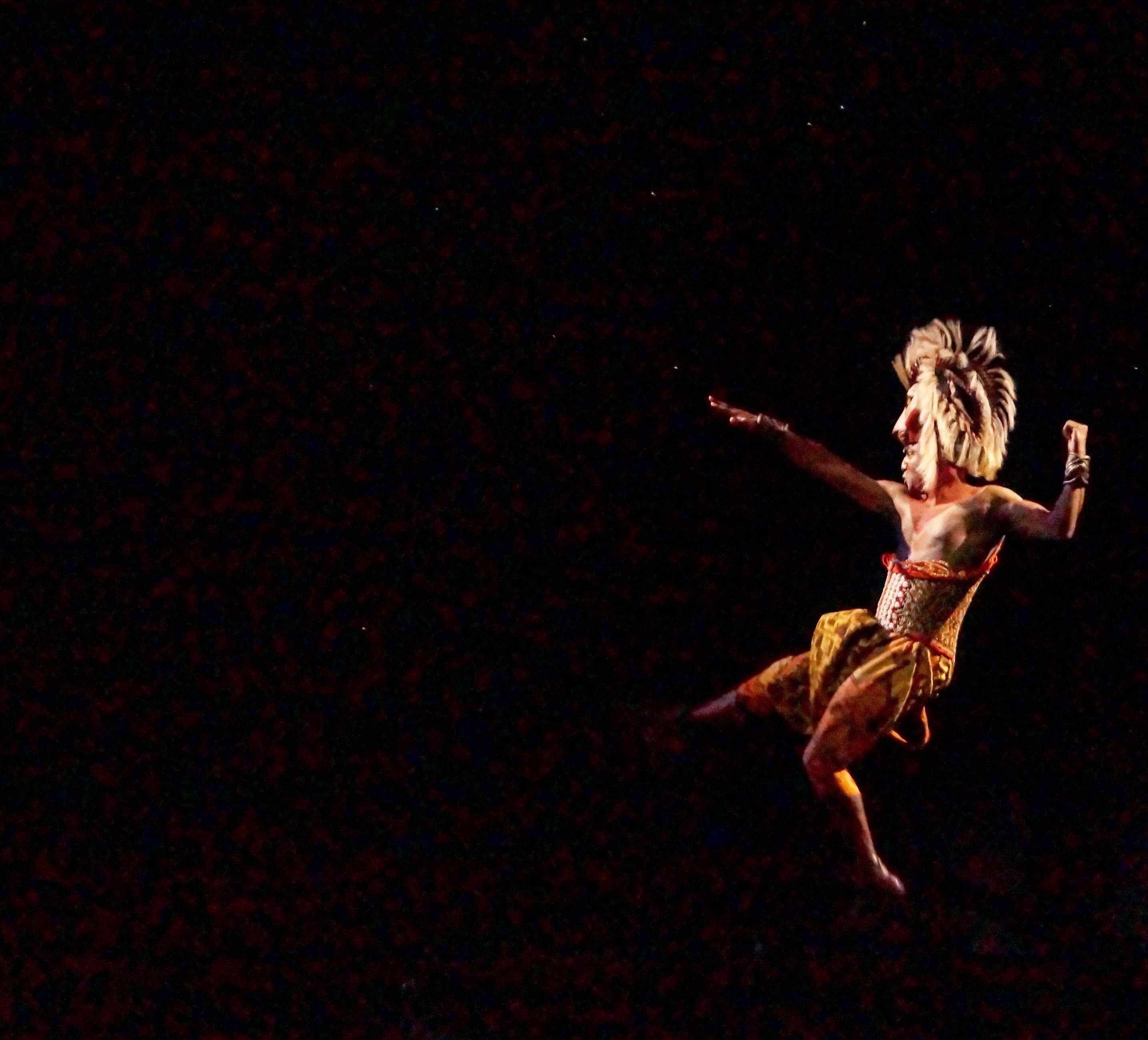 The Lion King follows the story of Simba, a young lion cub set to succeed his father Mufasa as King of the Pride Lands. But things go awry when his jealous and power hungry uncle Scar attempts to seize the throne, leading to Simba being forced to grow up in exile. When the Pride Lands faces imminent doom, Simba must return from his carefree days and learn to take up his responsibility as the rightful king once again. Despite being ‘animals’, there’s a keen sense of the human condition that underscores each and every character, allowing these universally resonant themes and stories to hit home with anyone, making The Lion King a production that can and will connect to any audience member, no matter their age or background.

At the media call held on Thursday (28th June), the cast of The Lion King presented snippets from the musical, performing songs such as the epic opening number ‘The Circle of Life’ (no doubt one of the most famous numbers from the musical), the rousing and energetic ‘He Lives In You’ and the Academy-Award winning ‘Can You Feel The Love Tonight?’, making us just want to hold our loved ones close. 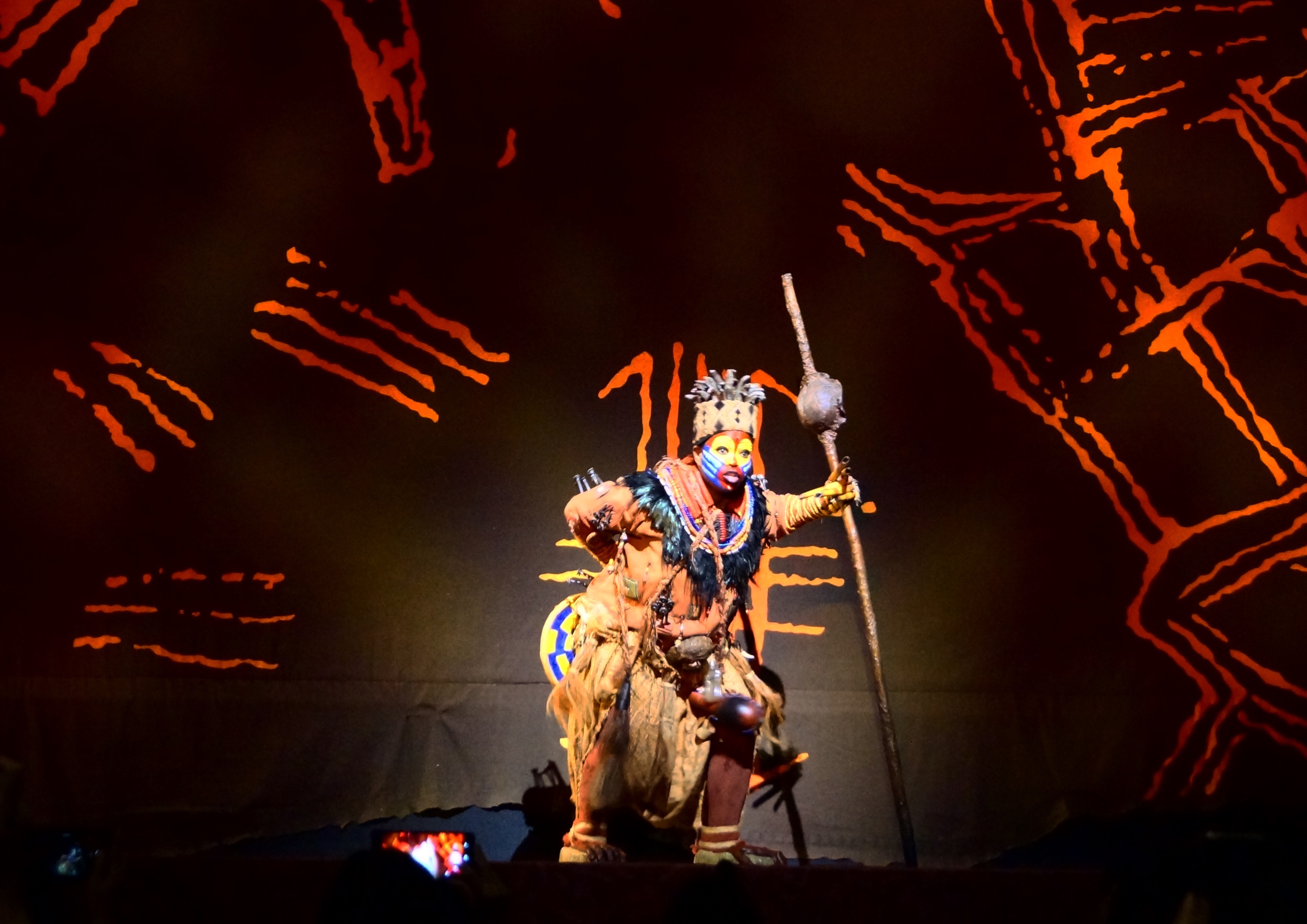 These numbers were interspersed with puppetry and character demonstrations, hosted by Resident Director Omar Rodriguez, giving members of the media a chance to see how individual puppets worked, such as the character of Zazu (Andre Jewson) and the performance style of Rafiki (Ntsepa Pitjeng).

On the return of The Lion King in 2018 being such an event, says Resident Director Omar Rodriguez: “We’re so happy to be able to bring The Lion King back to Singapore. It’s literally one of the most important shows in the world. Even though we’ve probably seen it over a hundred times and work on it so often, I still find myself learning every day. As artists, we’re passionate and intense, and being able to do this is simultaneously a challenge and a blessing.”

On the joys and challenges of working on the production, says Resident Dance Supervisor Teresa Nguyen: “Our cast and creatives come from 19 different nationalities, and to tour together, we’ve been learning how to transcend language and culture itself to communicate via music, movement and acting. Every time they step onstage, there’s something fresh and new to be discovered, whether it’s the inflections in each line or the emotions they bring onstage as they do the puppeteering.” 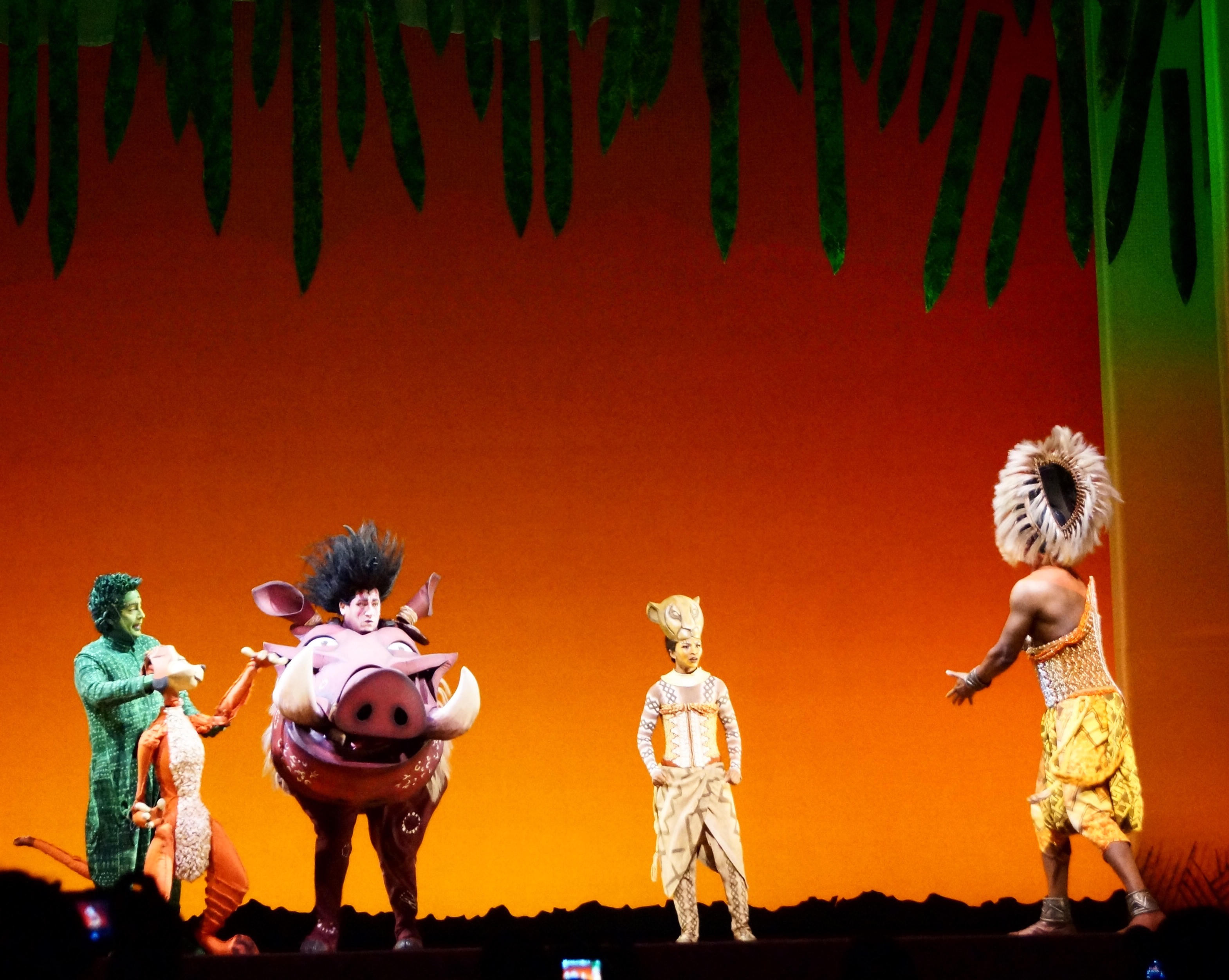 Says Music Director Mike: “Even in the orchestra, there’s so many different personalities, and to make good music, it’s all about learning to listen to people and understanding how they work or think. The Lion King’s score is classic, and each time you revisit it, you’ll be creating new memories still.”

He adds: “Touring together for so long, we’ve become a family. In between cities, we usually get a little break and we may fly all over the world for our own plans, and when we come back together again, we realise we’ve all really missed each other. That’s a good sign, because it shows we’re really connected in everything we do in having built up this show to what it is today.”

The lead role of Simba will be played by West End actor Jonathan Andrew Hume, which will mark his return to Singapore after performing in the 2011 production of the show, while South African performer Noxolo Dlamini will star opposite him as the lioness Nala. There was an undeniable chemistry between the two as they performed ‘Can You Feel The Love Tonight?’, and it was evident this was built up after long weeks of rehearsals and time spent together, weaving in emotion while almost waltzing with each other during the number. Says Jonathan on his return: “There was such a fantastic response the first time around in Singapore, and you know what’s a constant struggle? The fact that you guys have such great food, and we still have to keep in shape for all the physical demands of this show!”

Elaborating on his own journey’s similarities to Simba, Jonathan continues: “I first started out as a member of the ensemble while in London. Back then, I was still very young and naive, and the cast and crew have always been like family to me, nurturing and helping each other grow. Just like Simba’s own growth, I’ve grown as a person and an actor in the years I’ve been involved with The Lion King, and I’m glad the directors gave me the chance to play Simba when I eventually felt I was good enough to audition for the role.” 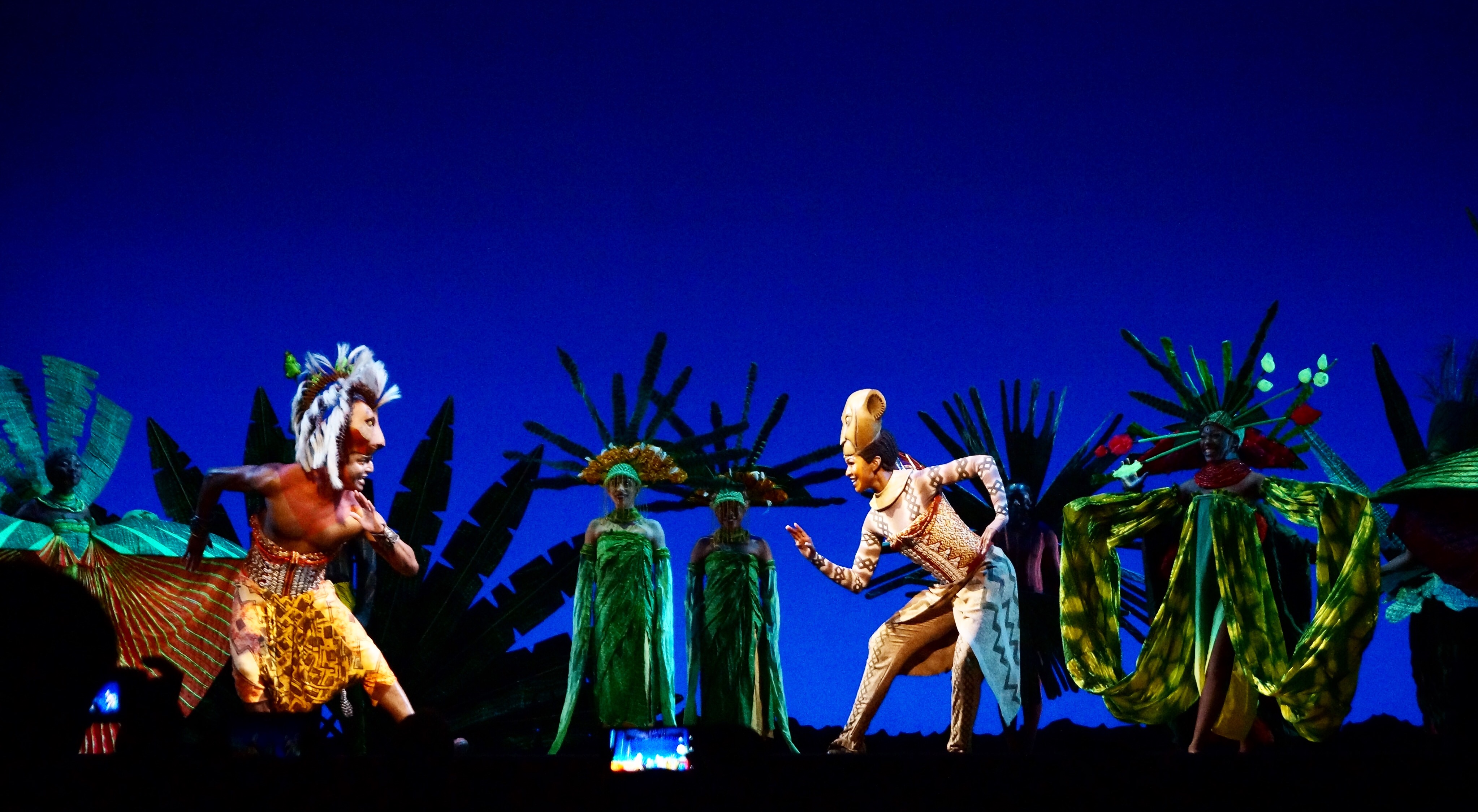 On how she prepared for her role, Noxolo says: “For my performance as Nala, I looked to my own mother for inspiration, having brought my siblings and I up singlehandedly. I wanted to become the kind of woman a young girl watching could look up to. Being from South Africa, this production, wth all these masks, the set, the sounds, and really, all the effort that has gone into creating this phenomenal spectacle, it makes me feel like home.”

With regards to their onstage chemistry, Jonathan answers: “Onstage, keeping each night fresh is never about bringing in your own notes and pinpointing how to change a specific scene each night. It’s about the entire cast listening to each other as actors, and how each person says or brings out their line, and reacting naturally to it.”

Playing Simba’s father Mufasa is Emkay Khanyile, who took inspiration from his own father to bring across Mufasa’s paternal, guardian role. Says Emkay: “In my youth, I’d have some pretty wild days, and my own father sometimes had to step in and save me. In explaining where I went wrong, he’d have to put aside his anger and teach me in a way that I would be willing to learn from my mistakes, and I wanted to do the same in the way my portrayal of Mufasa relates to Simba.” 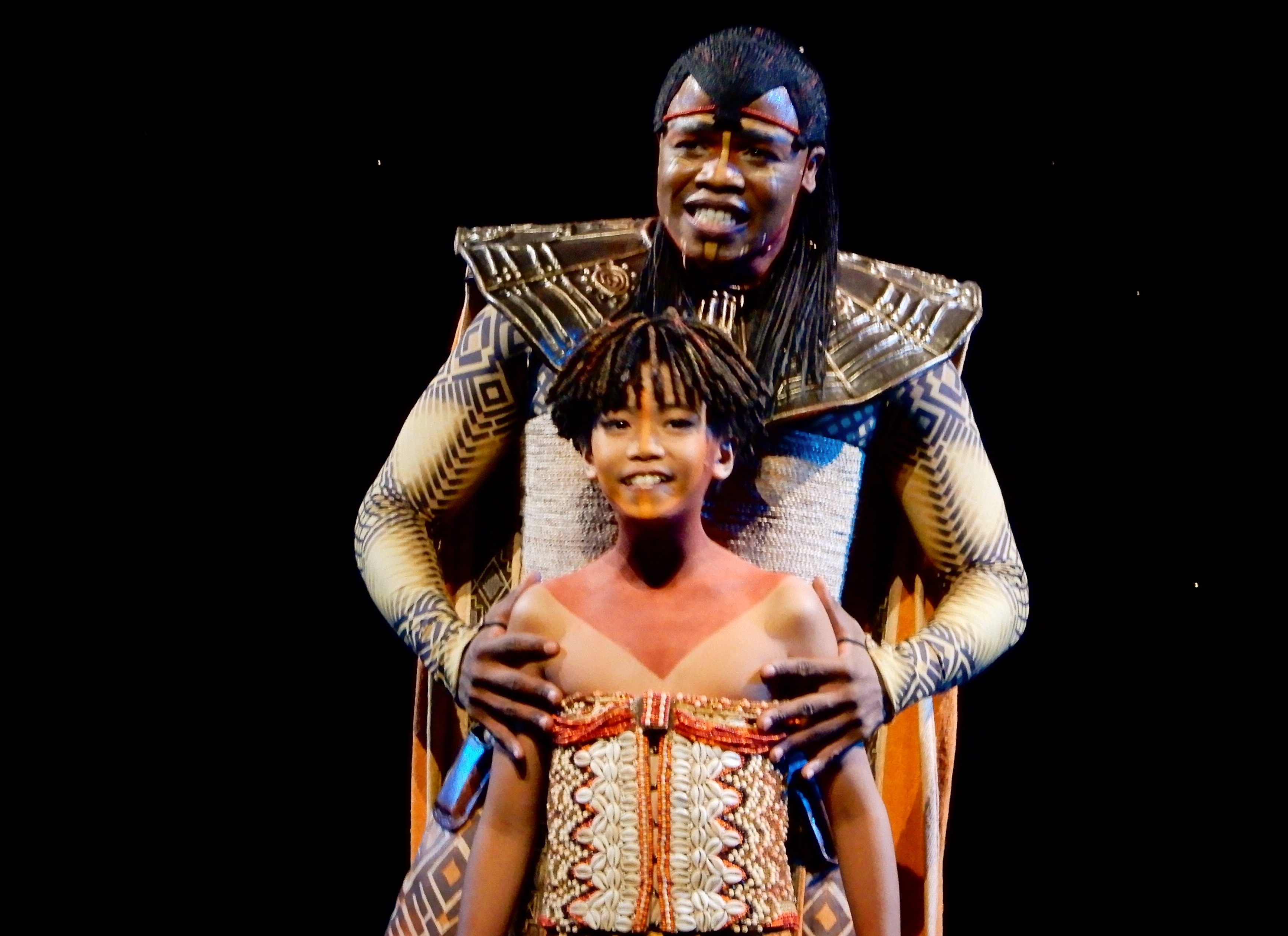 There is so much detail that has gone into even the smallest aspects of costuming – Mufasa’s mask, for example, is a perfect circle, representing his desire to maintain the delicate balance in the circle of life. Says Emkay: “Mufasa is a very stoic character who prefers to keep his anxieties inside and behind the mask. He’s afraid for his curious son who’s always finding himself in danger, and fears that he’s running out of time.”

Says Anthony Lawrence, who plays the villainous Scar looking to wrest the throne from Mufasa: “I myself took inspiration from my position as a younger sibling, and tried to work this sense of sibling rivalry into my relationship with Mufasa. At the end of the day, you take away the lions, you take away the costumes, and underneath, there’s so much relatability and humanity in this story – a father dies, two people fall in love, someone has to deal with the past.”

At the media call, a very special guest was also present for interviews: Lebo M, who provided additional music and lyrics for the Broadway adaptation of The Lion King, and was in fact, the voice one hears at the very beginning of the 1994 film, with the opening lines of ‘The Circle of Life’. Says Lebo: “You know those opening lines in the movie’s ‘The Circle of Life’? That’s actually from the second demo we did. When we approach a project, we never see it as ‘just a demo’, we go full throttle and do the best we can in each recording. In the Broadway adaptation, we aimed to remain as authentic as possible in the score, and make sure the production was genuine and loyal to the spirit of the original script.” 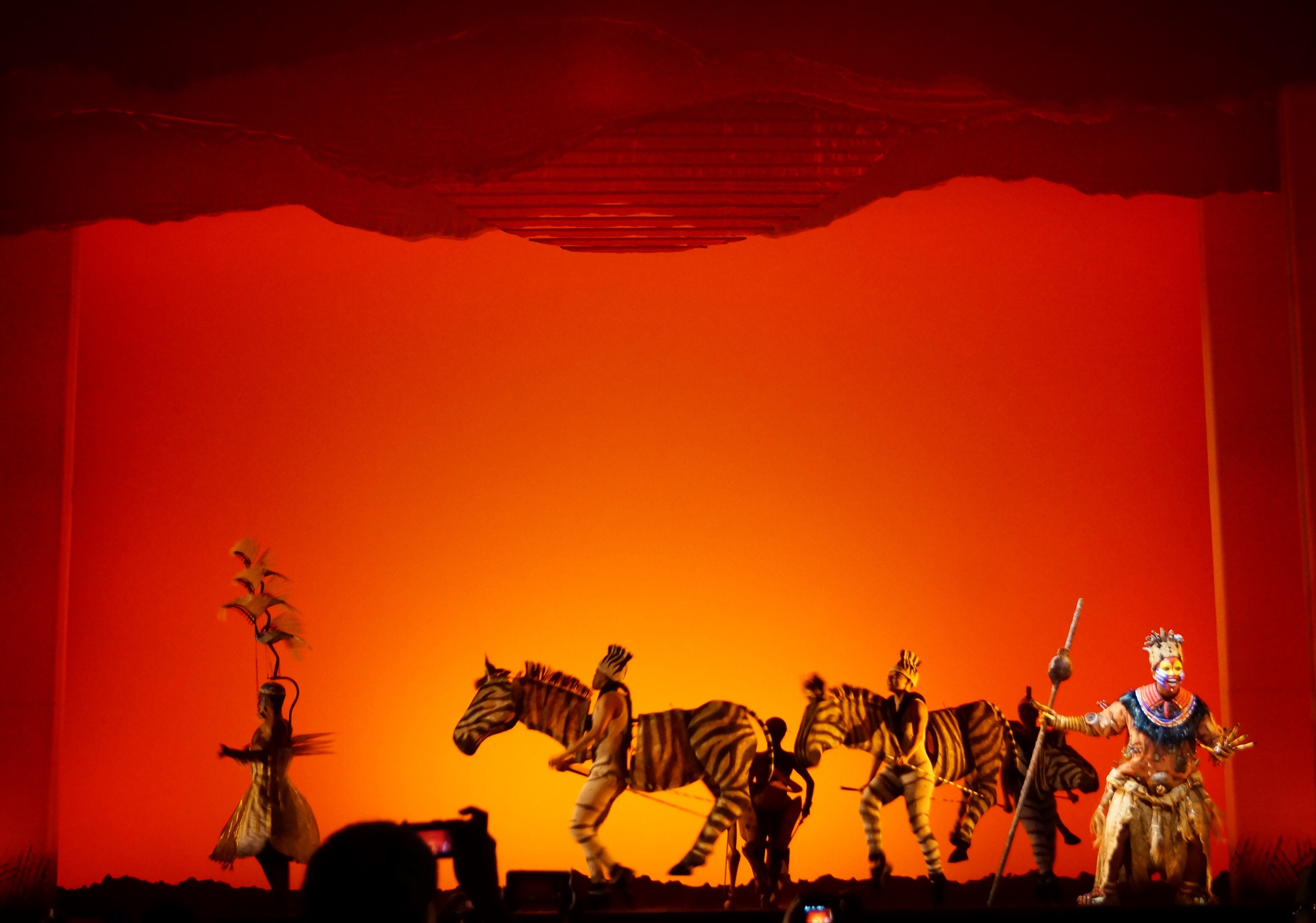 Says producer Michael Cassel: “The Lion King is such a timeless story; there’s no language barrier when anyone and everyone can identify with the human spirit that comes out in this story. It’s incredible how a musical continues strong 20 years on, playing in so many cities across the world and constantly being introduced to generation after generation. I mean 7 years ago, some of the audiences in Singapore weren’t even born yet, and people who did watch it in 2011 will still come back to relive the experience. The Lion King is a masterpiece in its book, music and lyrics, and it’s the kind of show that could easily carry on for yet another 20 years more.” 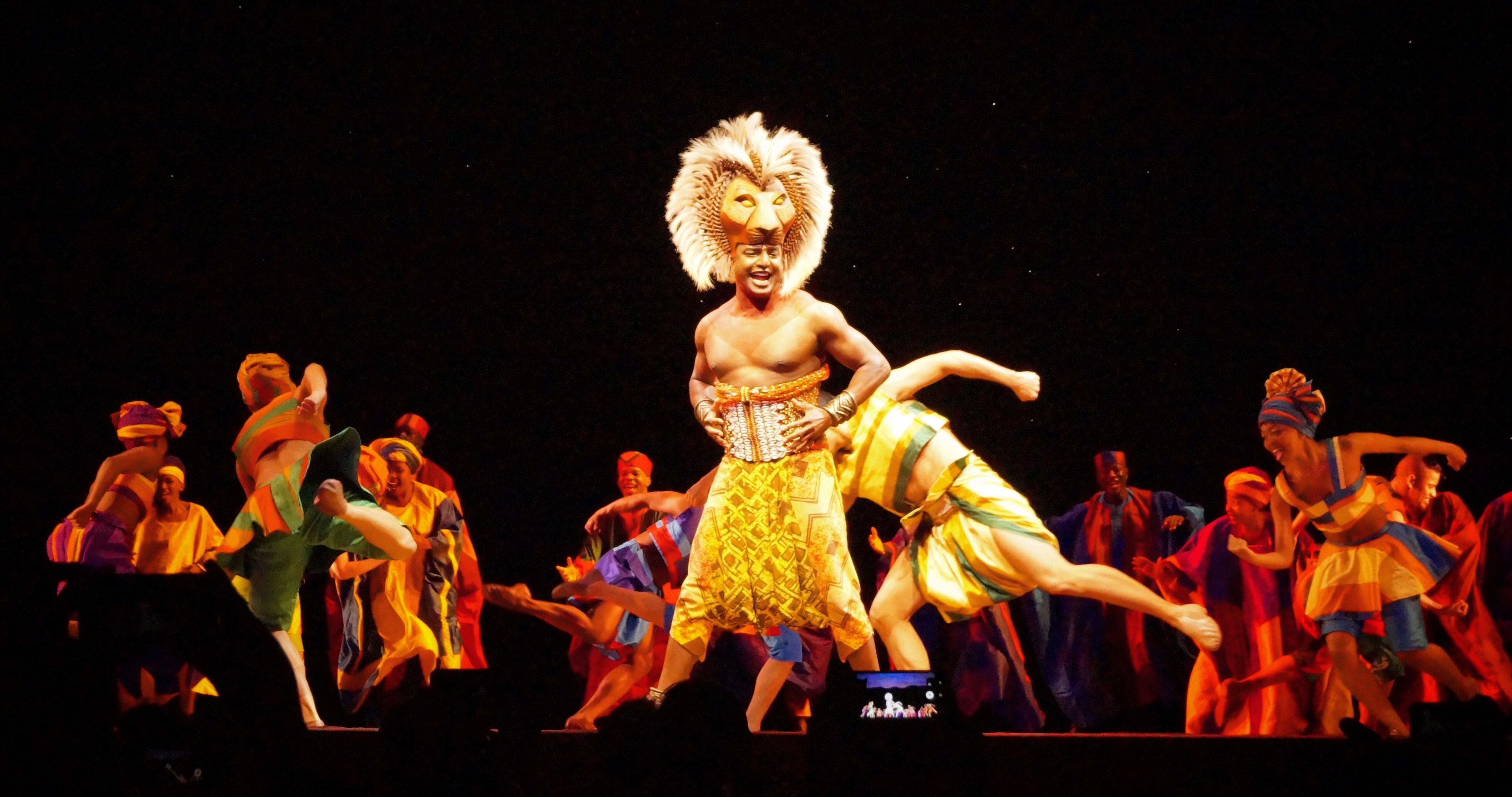 From what we’ve seen at the media preview, we’re more than convinced that the return of The Lion King is one that was well worth the wait – with a fantastic cast, music that has withstood the test of time, theatrical mastery at its finest and above all, that touch of Disney magic, this is the touring show of the year you have to catch with friends and family again and again. Stay tuned for our review of the show this weekend for more insight into just why The Lion King can and should continue defending its title of The World’s Number 1 Musical.

0 comments on “The Circle of Life: The Lion King Returns To Singapore After 7 Years”