A change in format and strong curation makes Dream Academy’s signature comedy show more laugh out loud than ever before.

There’s nothing more exciting than a show with stakes, and with the fourth edition of Dream Academy’s Happy Ever Laughter, those stakes are raised as the signature comedy show pits 12 of Singapore’s best comedians against each other as they vie for the title of Singapore’s funniest. 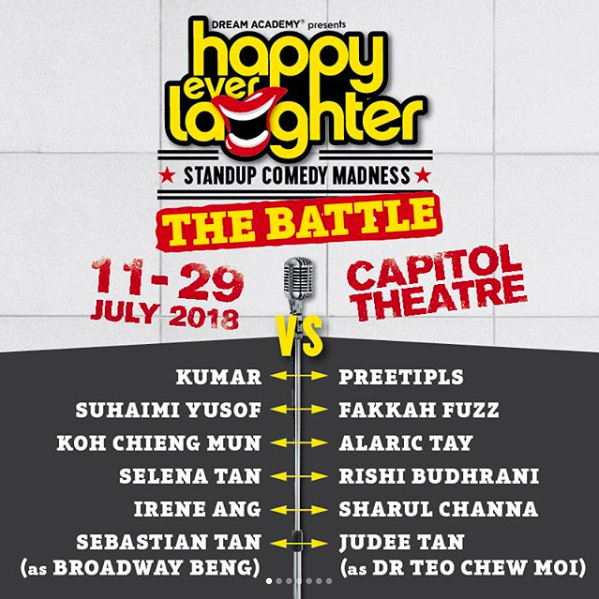 Taking on a tournament format, we see these 12 comedians split into two teams of 6: the more experienced team ‘Laojiao’ going up against rising stars in team ‘Kukujiao’. Each team clad in boxing robes and ready to battle in either side of the ‘ring’, the comedians were introduced with well-made graphics and took on an almost WWE-style atmosphere as the Capitol Theatre transformed into a (very cosy) arena for the night. Just to gather these twelve comedians in a single space is no easy feat, let alone finding time for them to rehearse together and commit to three weeks worth of shows amidst their busy schedule, and we’re always impressed how the Dream team manages this without fail every single time. Watching the combatants warm up and ready for battle, there was an undeniable buzz in the air as we waited with bated breath for the fight to begin.

Beyond the jokes themselves, there’s just something special about getting a throwback from seeing these classic Singapore comedy icons onstage together as team Laojiao, armed with their ‘Tiger Balms, Tongkat Alis and Koyok’ were introduced to plenty of applause, As for team ‘Kukujiao’, armed with social media apps like Twitter and experts at Photoshop, they too had plenty of fans, evident from the whoops and cheers when they came onstage, a fire in their eyes that said they were here to win.

Even if a few cast members were first timers to the Happy Ever Laughter lineup, each of them possess a certain calibre and pedigree, and the Dream team has done a fantastic job of curating the jokes and ensuring that enough rehearsals have gone into this show to ensure great segments from each of them. Warming up the crowd were The Noose star Alaric Tay and Under One Roof’s Koh Chieng Mun (famous for her role as Dolly), who brought their A-game as they showed off their comedic chops and how they’ve mined their experience and backgrounds as comedic television personalities into hilarious standup acts.

Comedy power couple and regulars on Comedy Central Asia’s comedy shows and the Asian comedy circuit Sharul Channa and Rishi Budhrani gave strong performances. Both prolific comedians in their own right, they each delivered a side-splitting performance that showcased sharp observational wit and pitch perfect delivery. Happy Ever Laughter regular Judee Tan came onstage as her signature character, stammering TCM practitioner Dr Teo Chew Moi, and as always, never fails to entertain. Fakkah Fuzz, the first Singaporean to get his own Netflix show (Almost Banned) was an inspired pairing to go up against Laojiao and Happy Ever Laughter regular Suhaimi Yusoff, and as the only two Malay comedians of the night, their face-off was a fascinating look at how much comedy has changed over the years and the changing face of Malay comedians.

Meanwhile, FLY Entertainment’s Irene Ang, famous for her role as Rosie on Phua Chu Kang Pte Ltd and known for her motivational speaking, naturally, delivered her own ‘motivational speech’ in her act. To see her finally successfully take to the stage after years of putting it off was a joy to watch, and in her own words, now that she was finally 50, ‘heck lah, just go for it’. Even Dream Academy artistic director and soon to be Crazy Rich Asian Selena Tan makes an appearance, her presence clearly felt from the moment she stepped out as she brought a bit of that Hollywood glamour to the stage.

Of course, it was Singapore’s favourite drag queen superstar Kumar who received one of the loudest rounds of applause when he made his appearance, as he went up against Instagram celebrity Preetipls (Preeti Nair). Preetipls is perhaps one of the most interesting new phenomenons to have hit social media in the past year, best known for her absurd, satirical videos on both Facebook and Instagram and quickly gaining a huge online following. It was good to see Preetipls try her hand at a new medium of live comedy, while Kumar did especially well at our night and evoked plenty of raucous laughs with his racy jokes.

But perhaps it was Sebastian Tan aka Broadway Beng who truly delivered the strongest performance of the night. It’s been over a year since we last saw Sebastian take on the role of the Hokkien-spewing lover of Broadway/West End musicals, and a welcome return for him, proudly boasting a new look and that ‘he had lost plenty of weight’. With the change in look, designer Frederick Lee can cut down on the material used for Sebastian’s costume, but that in no way means any trimming of his act, with Broadway Beng bringing down the house with his confident, clear delivery of a hilarious Hokkien number, making him absolutely deserving to be crowned as champion and Singapore’s funniest at the end of our night. 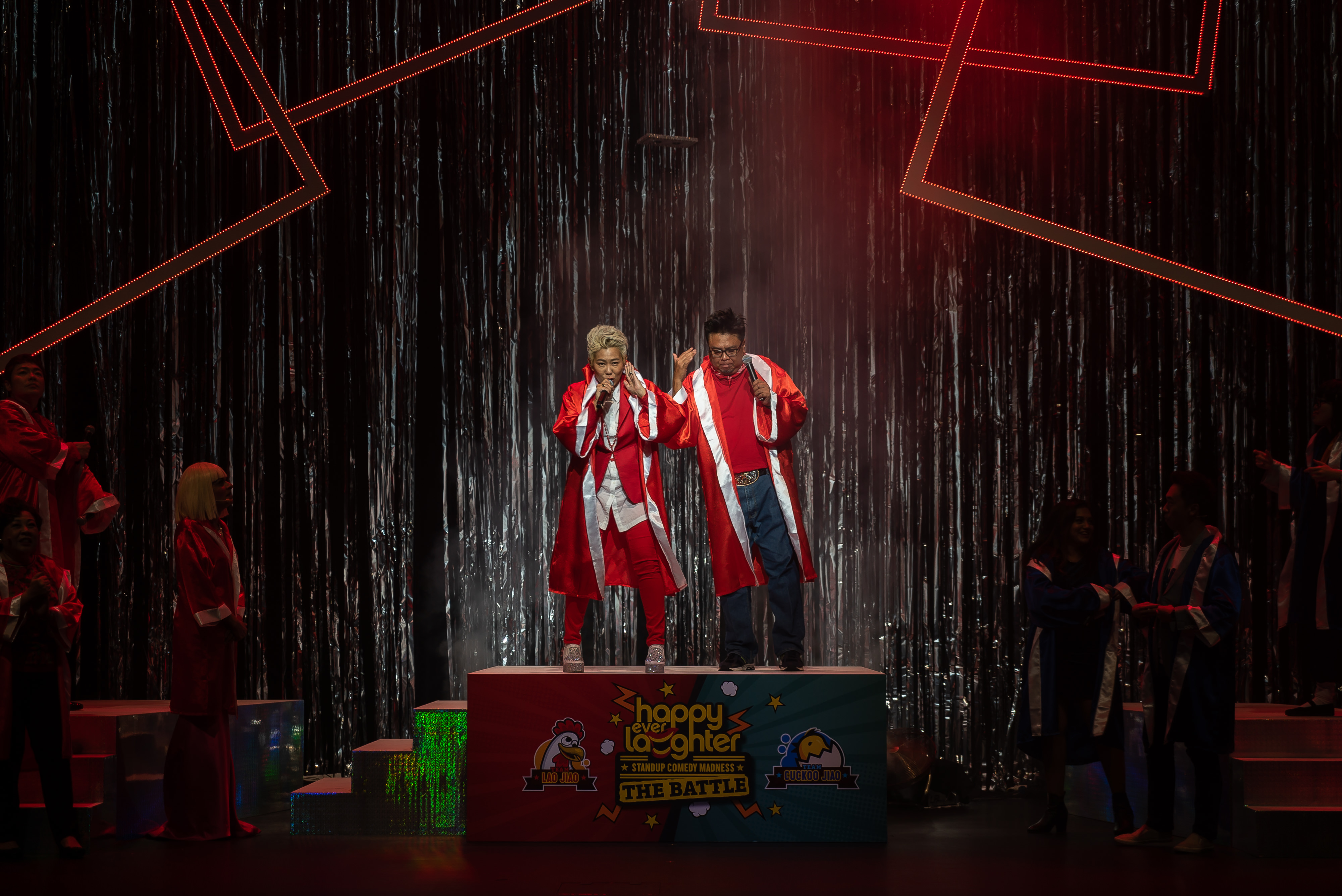 Happy Ever Laughter is a show that every Singaporean could do with at the end of a workday, a welcome break from the monotony of the daily grind and unraveling those uptight nerves with a healthy dose of laughter to relax and have fun. A rare opportunity to catch twelve of Singapore’s absolute best comedians in a single night, Happy Ever Laughter is well curated, well produced and a fantastic night out best spent in the company of family and friends and having a good time.

Want to catch the epic battle as these 12 incredible comedians face each other down in a battle of wits? We’re giving away tickets to catch Happy Ever Laughter! All you have to do is:

Happy Ever Laughter 2018 plays at the Capitol Theatre from 11th – 29th July. Tickets available from SISTIC

0 comments on “Review: Happy Ever Laughter 2018 – The Battle by Dream Academy”