The Malay oral tradition is a rich one, full of colourful characters and unforgettable stories. But as these tales become increasingly hard to hear in the traditional form, so must they evolve with the times to find a new audience. That evolution can be seen in the 2018 Pesta Raya – Malay Festival of Arts opening show, as familiar characters from Malay folklore come together for a musical adventure in Alkesah.

Written by Zulfadli ‘Big’ Rashid and directed by Aidli ‘Alin’ Mosbit, Alkesah dives into the world of Malay folklore by taking popular characters from these tales and uniting them in a single Kampung. Dreamer Mat Jenin (Norisham Osman) unwillingly inherits the position of village chief from his late father, and as the village faces an increasing number of misfortunes, local ‘astrologer’ Pak Belalang (Jeff Catz) puts the blame on ‘child-eating’ witch Nenek Kebayan (Siti Maznah). As Mat Jenin braves the perilous journey alone, he might just discover that there’s more to this story than meets the eye. 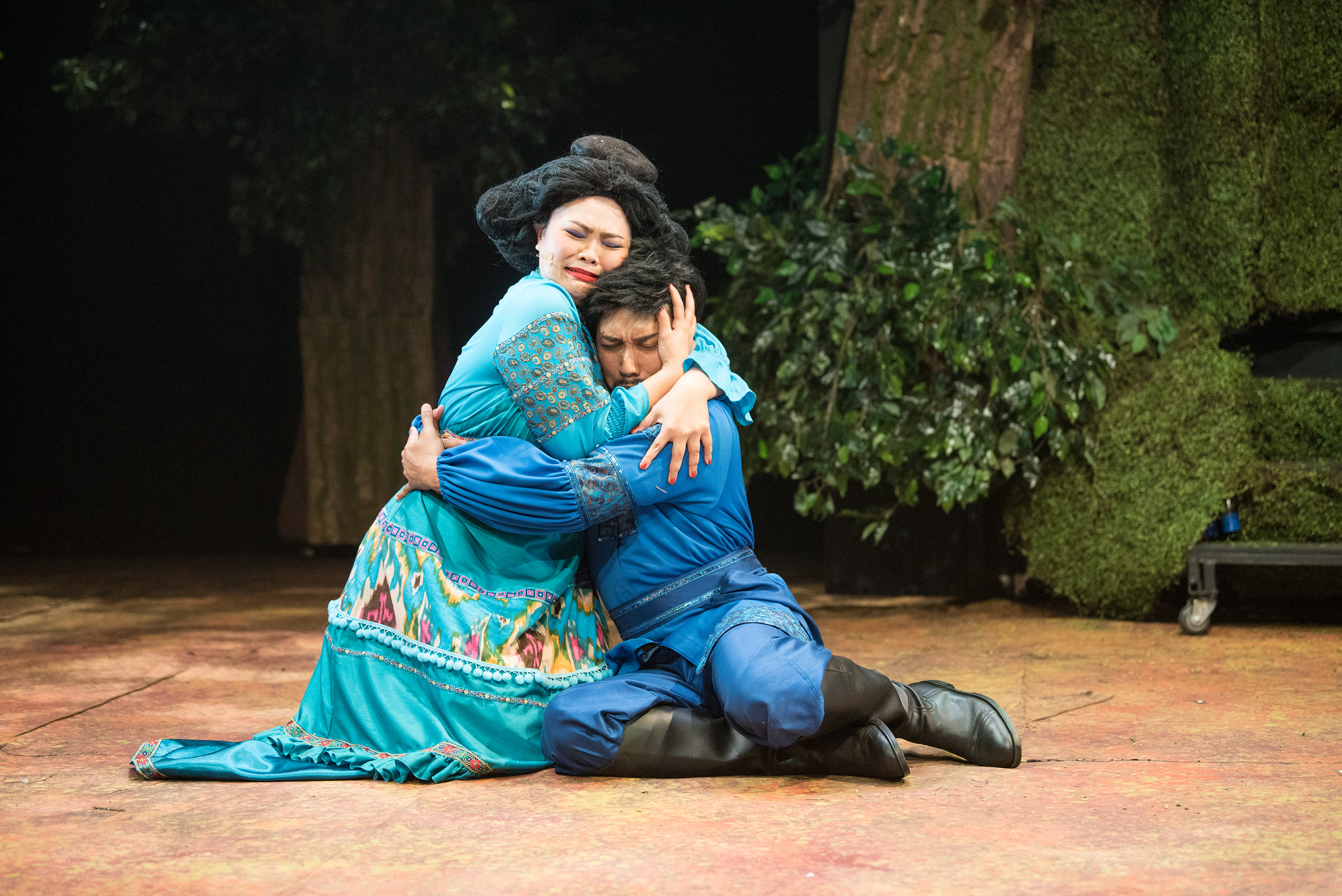 Alkesah takes place in a fantasy world steeped in Malay tradition, with set designer Wong Chee Wai creating a forest-like environment that makes full use of the Esplanade Theatre Studio space. Characters are dressed anachronistically and fashionably in detailed, bright, colourful outfits by Moe Kasim each with their own theme colour, blending traditional clothing forms with modern touches (such as Sang Kancil’s hoodie and sneakers). Right from the start, there’s already a sense of the whimsical as a multicoloured, googly-eyed owl and two-man operated elephant (designed by puppet designer Frankie Malachi) appear onstage to converse in hoots and trumpets, setting the stage for a weird and wonderful performance ahead. 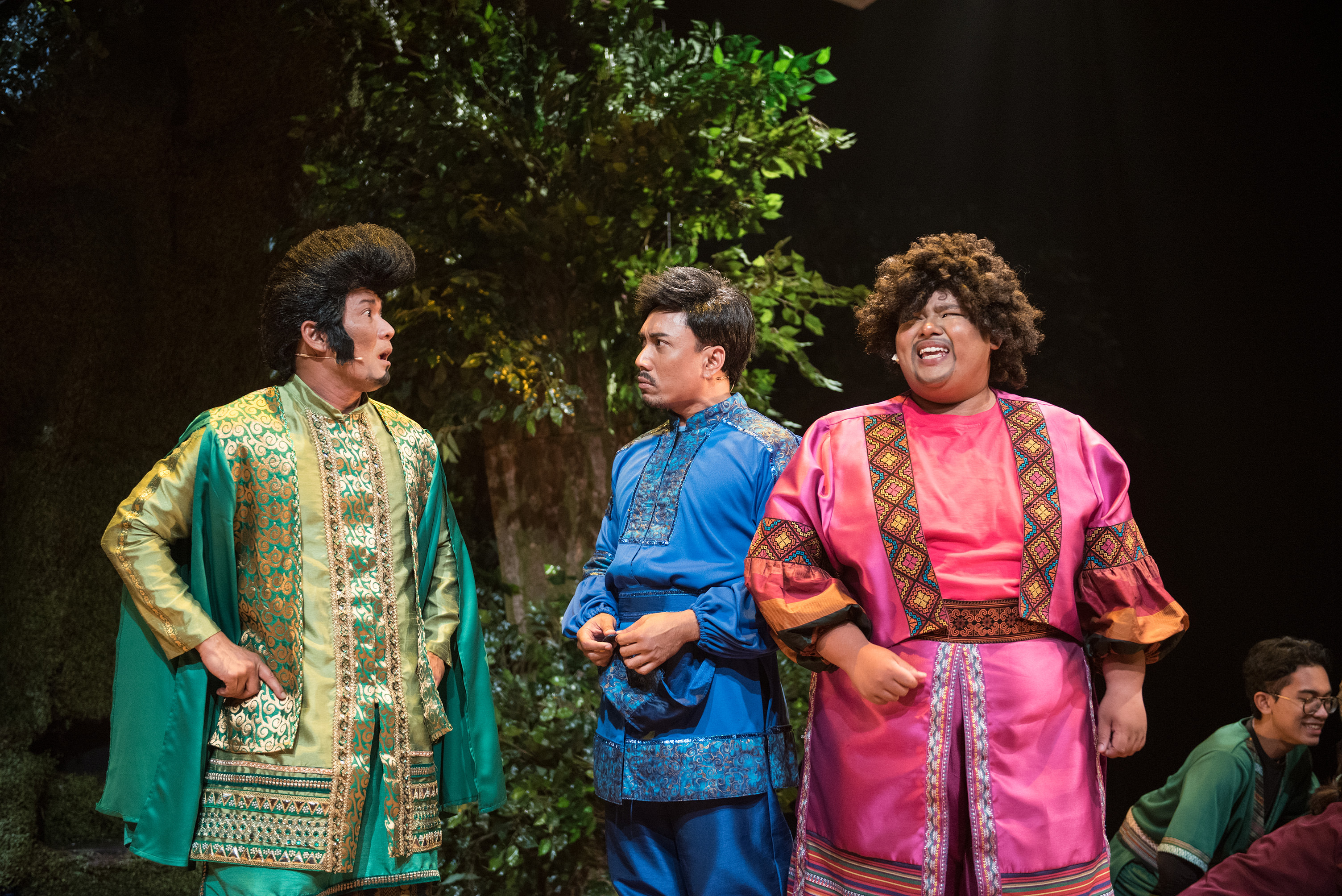 Although one did not personally grow up listening to the Malay folktales these characters originated from, each of the eight featured characters come with their own distinctive personality traits, easy to follow and understand the moment they’re introduced. Zulfadli ‘Big’ Rashid has done a good job of using the village of Alkesah to create a natural setting for these characters to come together, and a simple but effective storyline that pays homage to these characters’ origin stories while putting some innovative touches, such as how Sang Kancil has been reimagined not as a mousedeer, but as a ‘child of the forest’, wielding a tablet as she writes her stories. There’s plenty of humour in this script, from unexpected one-liners to even degrees of absurd comedy, with every character given just as much time onstage as the others to shine. Big also subtly introduces political themes into the play, from environmental awareness to gender equality, making Alkesah go above and beyond a simple fairytale, feeling modern and relevant to the times. 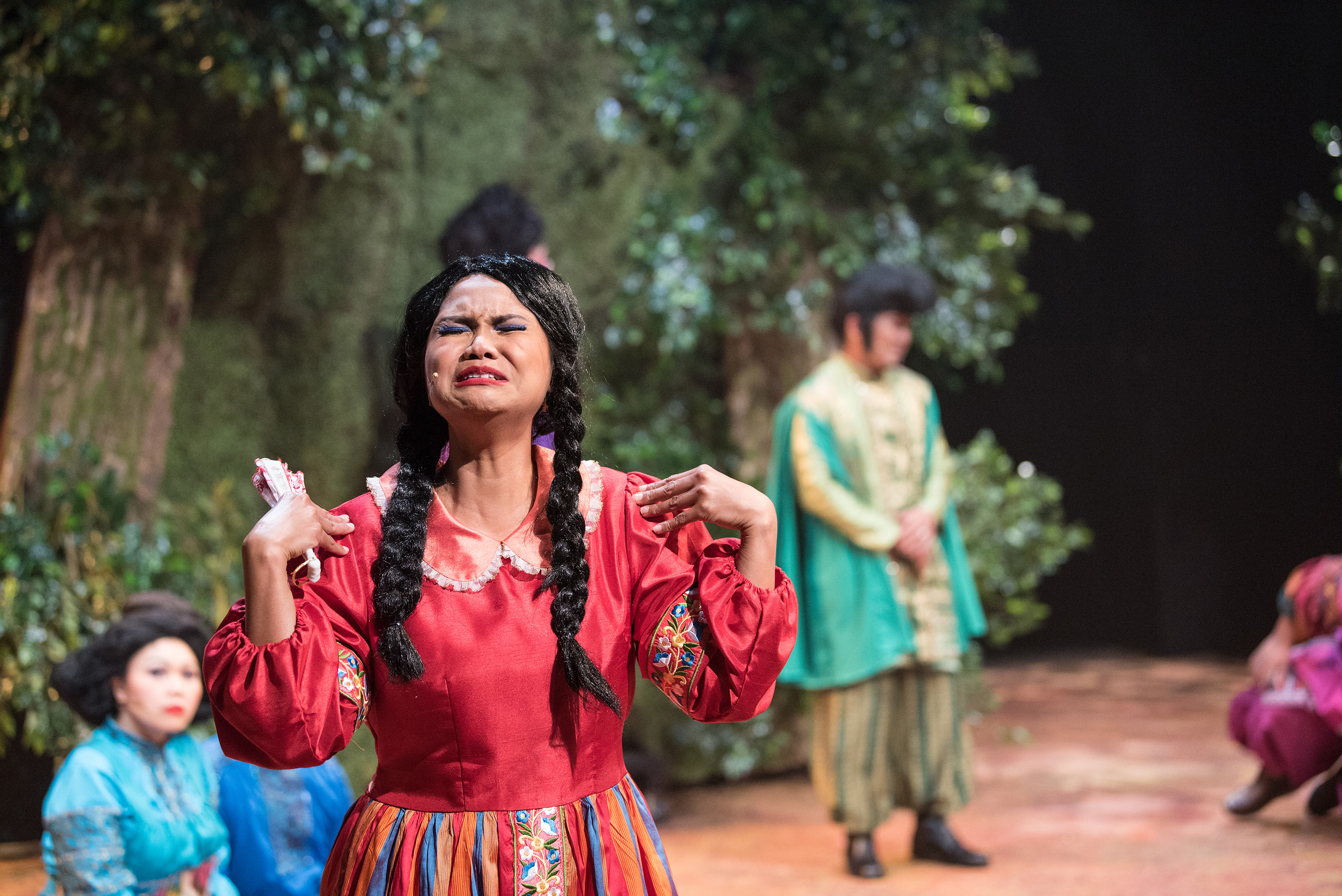 Alkesah’s cast is fantastic, with eight of the best Malay actors today giving off spectacular energy as they play their roles to charming perfection. Whether it’s Siti Khalijah Zainal as the fierce but incredibly intelligent Mak Andir, or Hatta Said as her husband, the gormless, comic relief fool Pak Pandir, there is an ease to their performance that makes every scene a joy to watch, no matter who is onstage. Siti Hajar Gani does well to bring out Mak Pekan as a simpering, flirtatious widow, while Jeff Catz is a perfect villain with his big pompadour hairstyle and over-the-top laugh. Of the cast though, it is Siti Maznah who steals the show as Nenek Kebayan Kak Yan, commanding every scene she appears in as a wise, older sister type character as she snaps her fingers and oozes sass in every dance move. 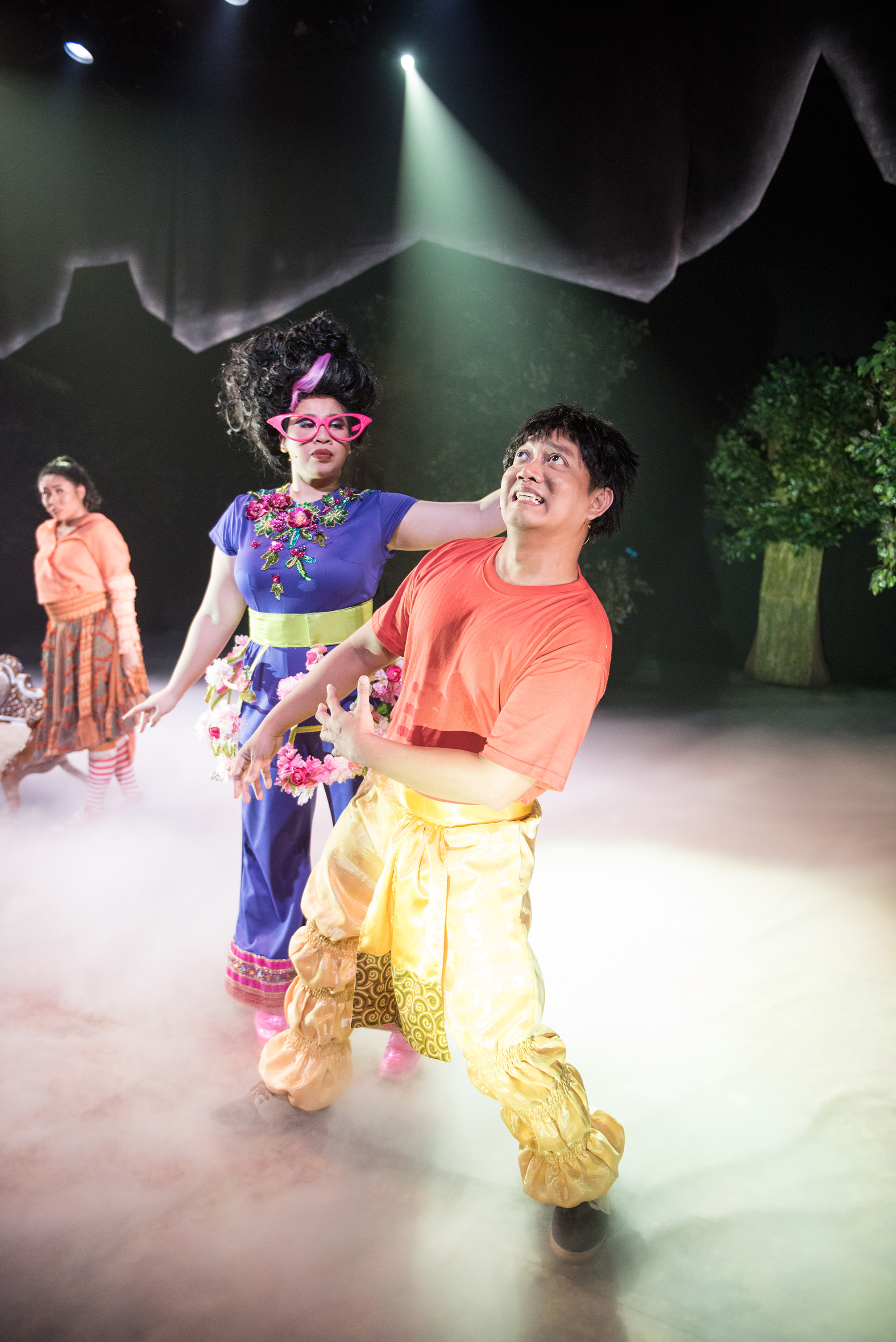 Part of the reason why Alkesah is so successful is because of the strong chemistry the cast shares onstage. With music direction by Elaine Chan, Alkesah’s catchy soundtrack has been carefully tailored to match each cast member’s voice and play to their strengths, bringing out the best of their vocal capabilities in every number, be it a soulful love ballad from Jeff Catz, a fast-paced duet between Siti Khalijah and Hatta Said or of course, the mass, showtune opener performed by the entire cast and capable ensemble. 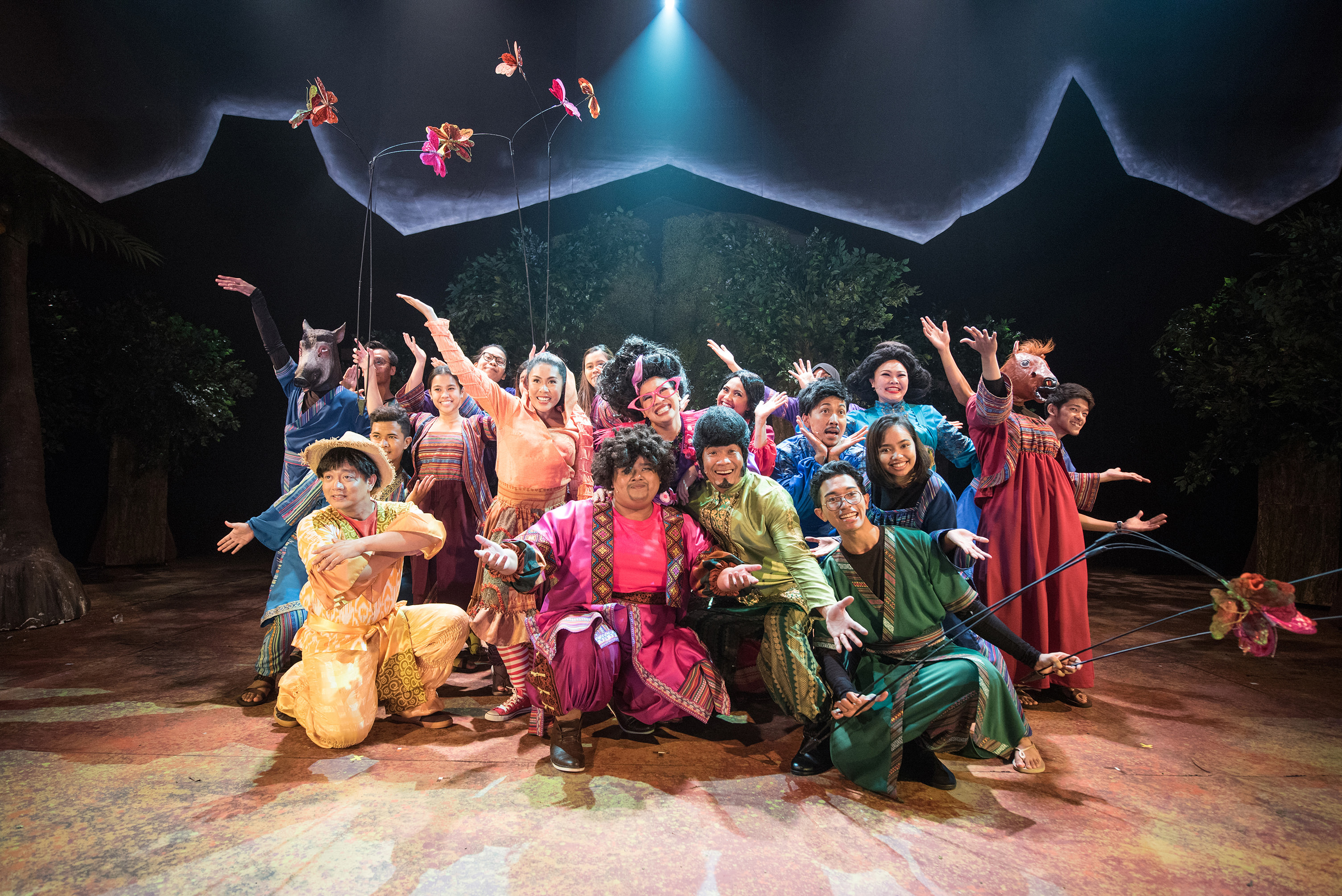 Bringing together tradition and modernity in a single well-written, well-directed production, Alkesah is a hugely enjoyable celebration of Malay culture wrapped up in a colourful performance by some of the best Malay actors today. A strong opener to the Esplanade’s Pesta Raya 2018, Alkesah is the perfect update to a traditional form that proves the potential that the Malay musical has, and one we’d love to see even more of in future.