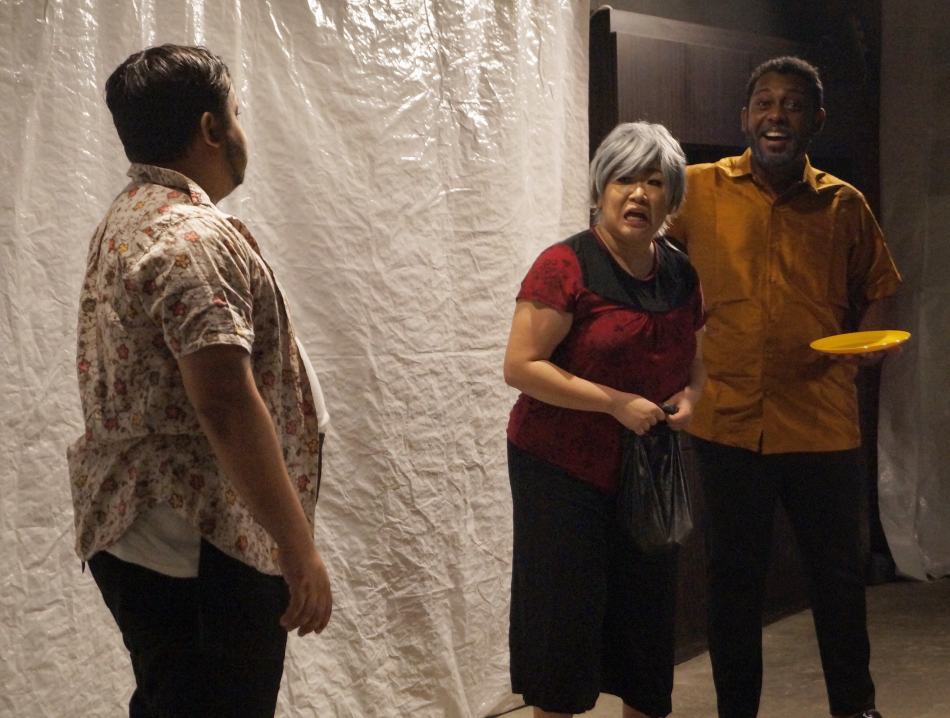 Capturing the soul of Singapore through its food and the people who love it.

There is nothing more quintessentially Singaporean than the concept of food, and for a theatre show celebrating that culture and history, it seems to make complete sense to elevate it by incorporating food into the performance itself to make for a multi-sensory, immersive experience. 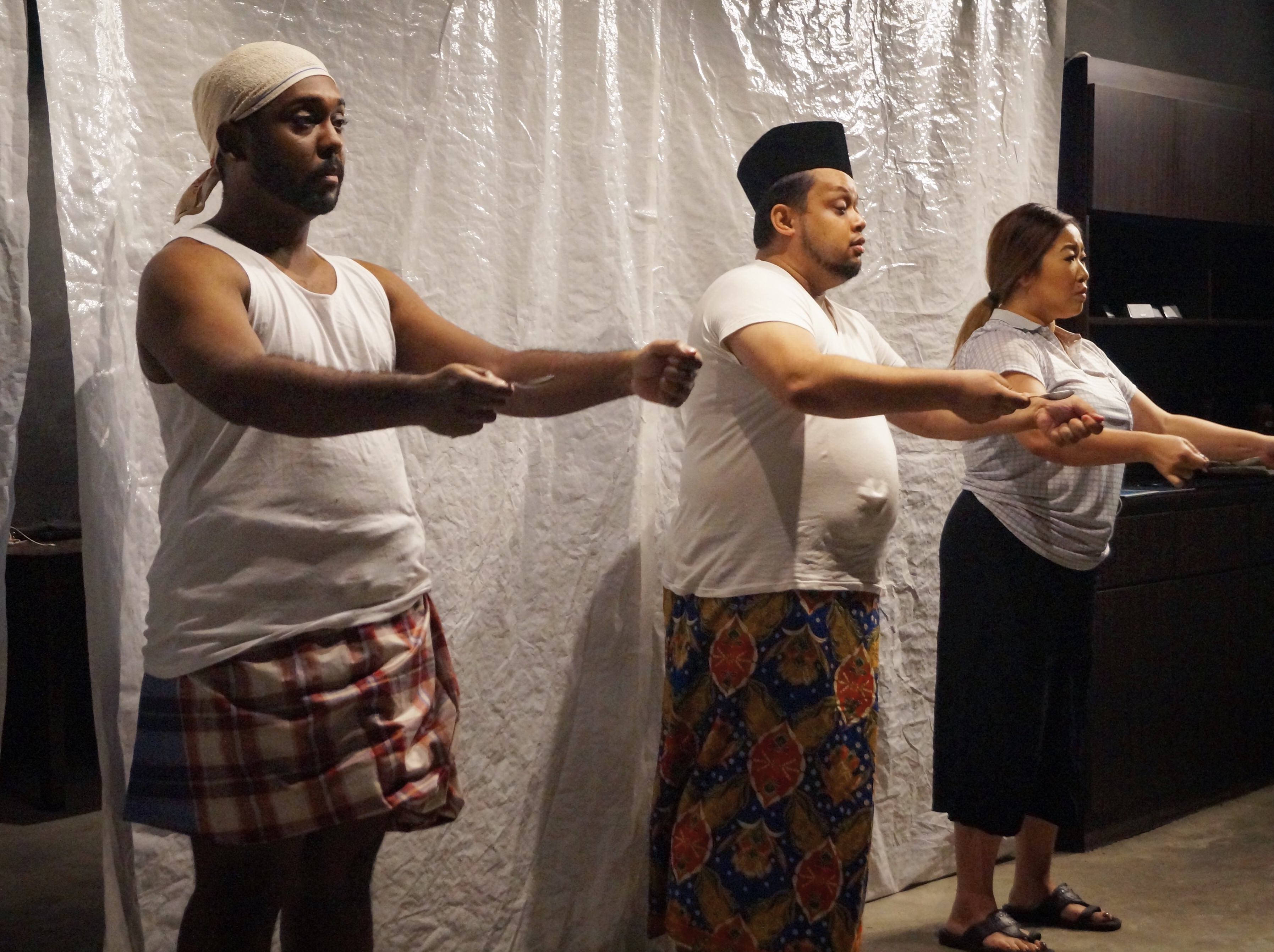 Directed by Kaykay Nizam and written by Zulfadli ‘Big’ Rashid, Makan Cosmopolitan is a theatrical dining experience inspired by our country’s love of food. The show comprises five short scenes, each showcasing a different set of fiercely Singaporean characters as they talk about how their lives revolve around food. 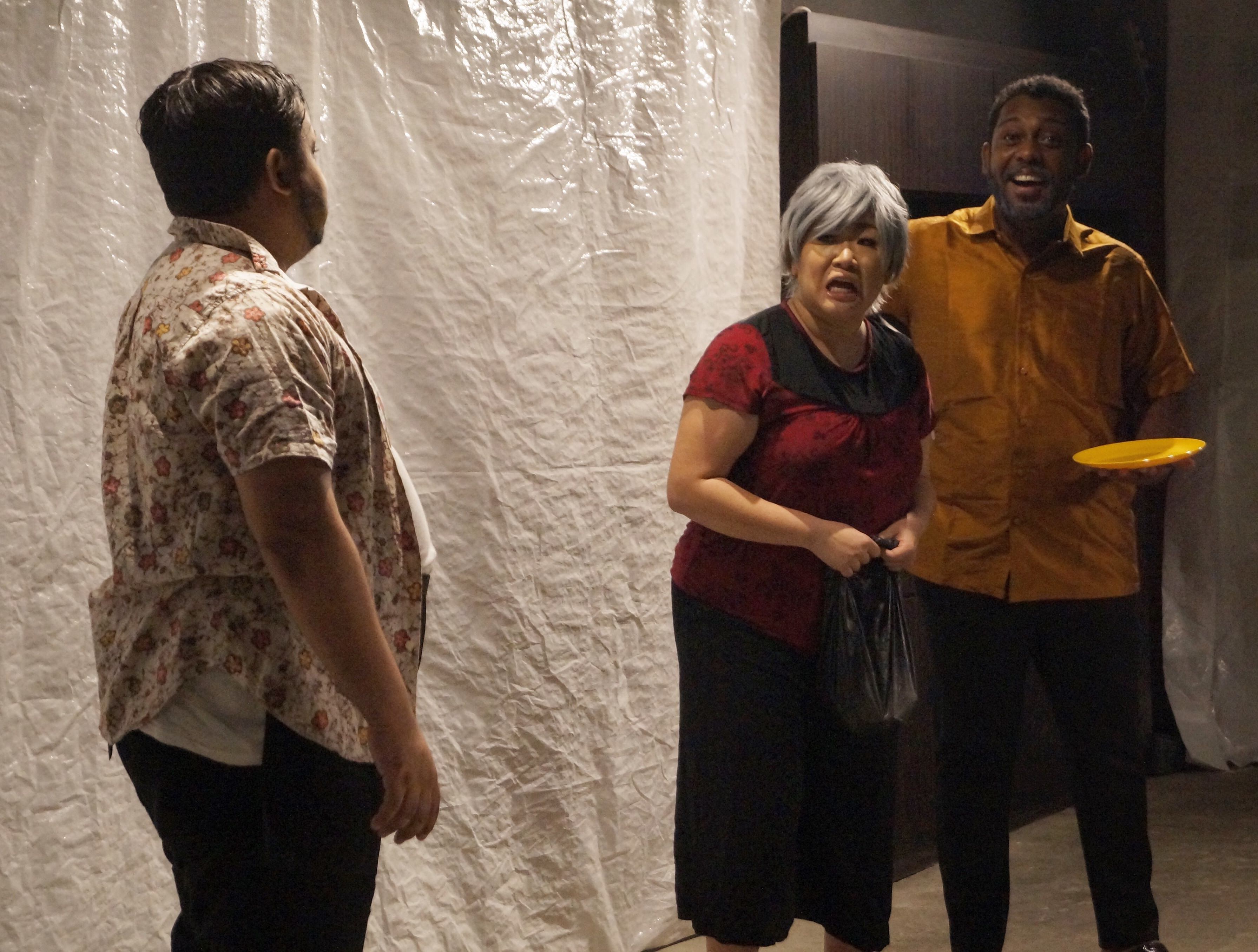 From disparate workers in the CBD sharing a table at the hawker centre, to a reality TV show attempting to reinvent classic Singaporean cuisine, there is a good range of scenarios that Big has written to present how strongly each and every Singaporean feels about food. Each and every one of these recognizable characters are people one might have encountered in real life, making their stories feel real, familiar and relatable enough to draw a connection to. 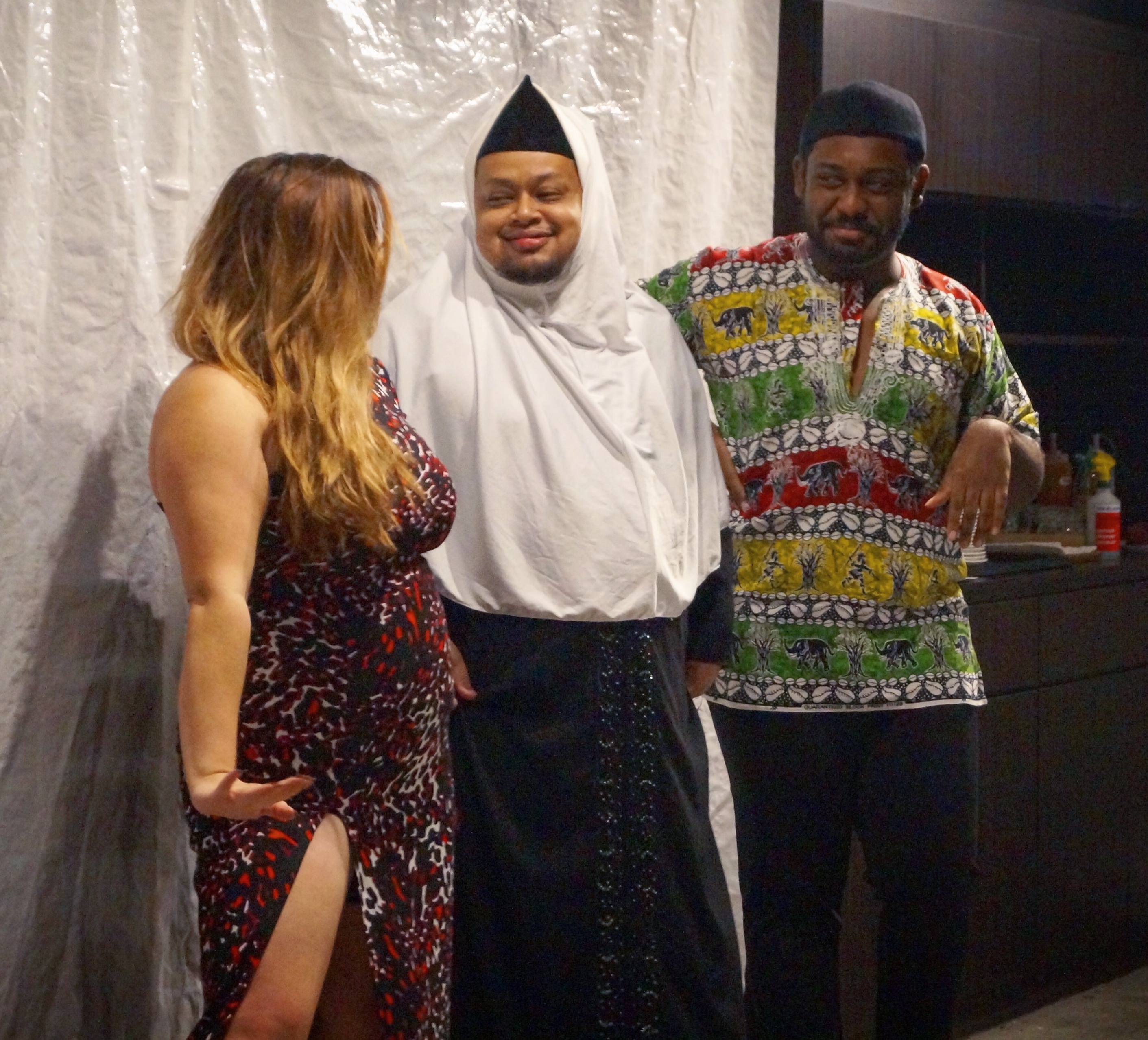 Starring as this diverse cast of characters are versatile actors Ebi Shankara, Gloria Tan and Mish’aal Syed Nasar, each given equal time to shine as they easily differentiate their characters between each vignette, and display a wealth of enthusiasm and energy to sell each one’s believability. There is an undeniable sense of fun running throughout the entire performance as they embody typical Singaporean characters from a tissue paper touting auntie to a nasi lemak making makcik, and there’s a good balance of the ridiculous and the poignant, with hawkers lamenting their ‘dying trade’ striking a chord with how the future of our street food might well be in peril.

Created by collaborator Chef Roy, the menu accompanying the show is inspired by each scenario presented, with food items ranging from classic Singaporean dishes to contemporary spins on them. Each of these dishes attempted to tie back to the scenes that inspired them, from the three appetizers ordered by the office workers as ‘tasters’ of the lunch items they ordered, to the reimagined ‘nasi lemak’ dessert served after a segment about a TV show attempting to reinvent classic Singaporean dishes. 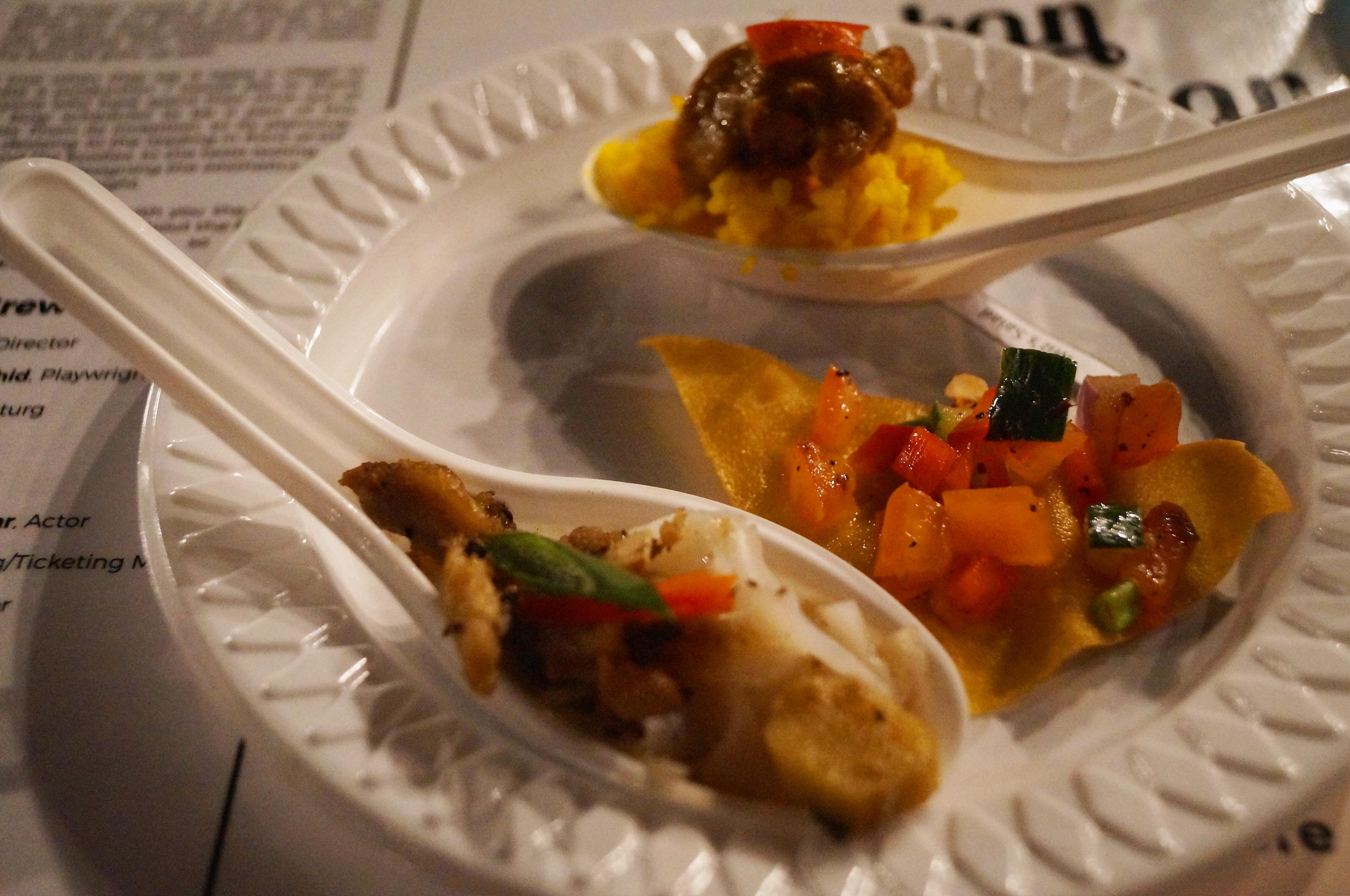 While the idea had potential to complement and elevate the performance to an effective, multi-sensory one, the execution faced multiple issues. While ideas such as sandwiching an omelette between two slices of carrot cake were interesting, the presentation of the food itself was already unappetizing, served cold on a plastic plate, and had inconsistencies in taste. The appetizers for example, were not a good representation of the food they were meant to replicate, with the ‘kway chap’ using chicken instead of pork, while the ‘nasi lemak’ dessert in attempting to replace all the ingredients found in a normal nasi lemak with sugary alternatives, tasted overly sweet. To be fair, our ‘main course’ featured a decent lamb burger, however, was served atop a biryani rice cake that was cold and hard. As this was presented as part of Singapore Food Festival 2018, One would have expected more from the food served. 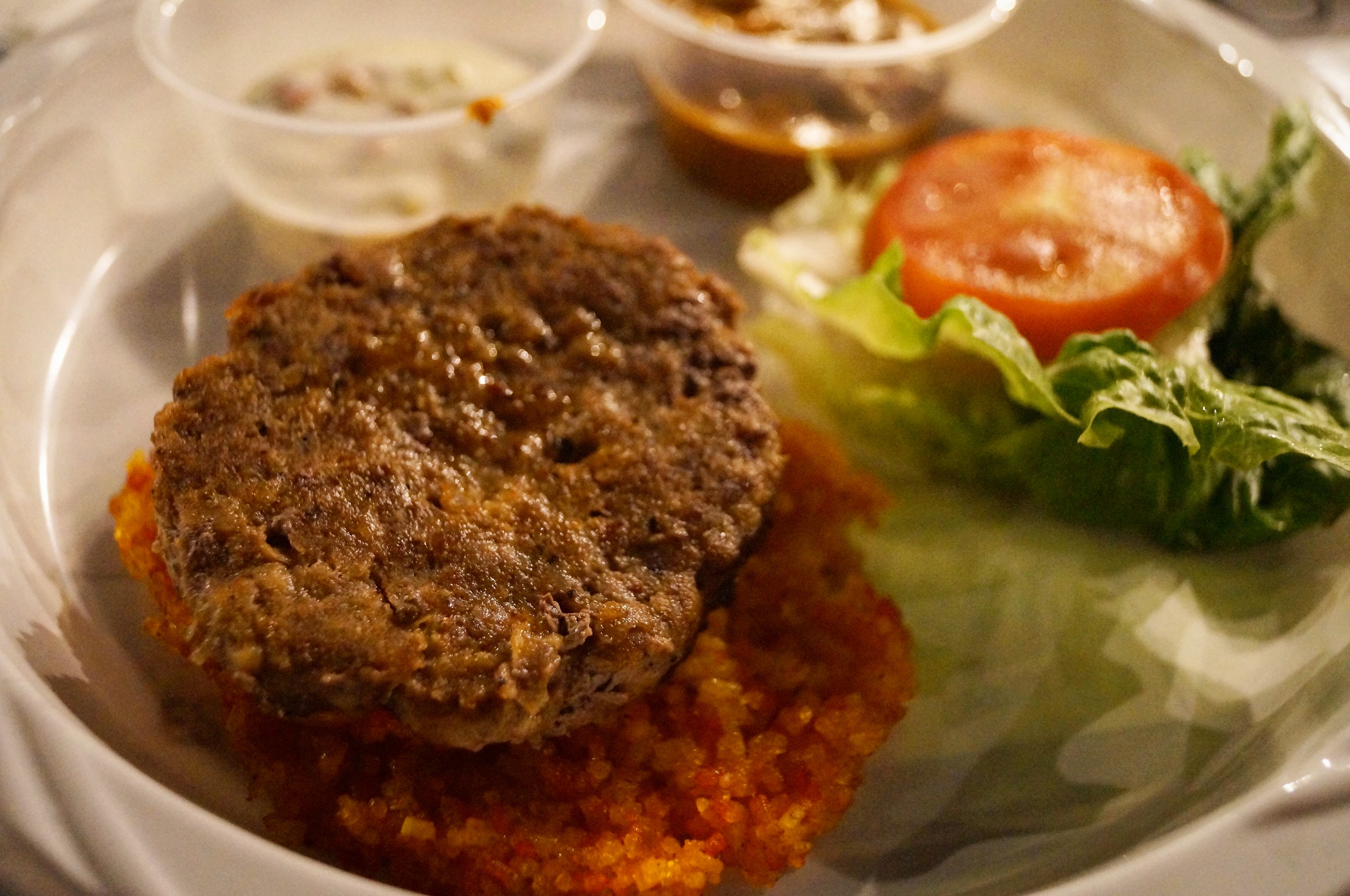 While it was an interesting concept to use a food establishment as a performance space to better immerse audiences into the experience with its bustling atmosphere. However, as an active bar, the space hindered rather than enhanced the performance, which was far too noisy, and was distracting with how the staff were busy moving in and out of the space to serve patrons seated outside. In addition, the uncomfortable seating was not well thought out, and did not offer an optimum viewing experience for all audience members to see all of the action onstage.

In spite of these challenges though, Makan Cosmopolitan remains a valiant experimentat in form to capture our nation’s food history and scene in a simple but effective series of vignettes (Which we thoroughly enjoyed). One hopes that Ape Studio Limited can take the lessons learnt from this experience and use them to produce stronger, more cohesive and effective immersive dining experiences in future.