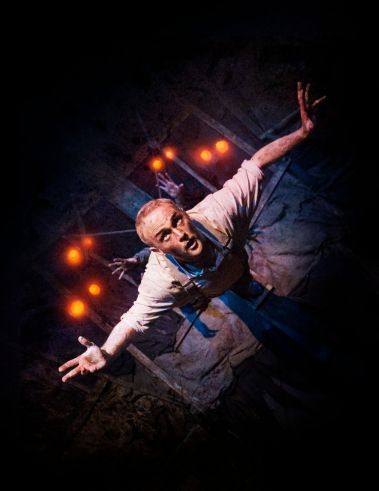 LONDON – Created by the same minds behind the wildly popular Alice’s Adventures Underground, Les Enfants Terribles presents their The Trench, set to play at Southwark Playhouse for a limited run from 10th October to 17th November 2018.

Written by Les Enfants Terribles Artistic Director Oliver Lansley with an original soundtrack by Alexander Wolfe, The Trench is inspired by the true story of a miner, ‘Burt’ who became entombed in a tunnel during World War One. As the horror threatens to engulf him, Burt discovers another world beneath the mud and death. Setting off on an epic journey of salvation, the boundaries between reality and fantasy blur as he questions what’s real, what’s not and whether it even matters?

The Trench stars Oliver Lansley as ‘Burt’, alongside Edward Cartwright, Kadell Herida and James Hastings, and this production will mark its London debut as the country commemorates the First World War Centenary. On Sunday 11 November there will be a special performance at 3.00pm. Promising a unique blend of physical storytelling, verse, puppetry and live music, get ready for a deep dive into the unknown and question reality itself with Les Enfants Terribles’ The Trench this October.