Thrilling, wickedly sharp choreography and strong set design makes for a spectacle of a performance.

For veteran choreographer and dancer Akram Khan, life has a fascinating way of coming full circle. One of his earliest experiences on the stage would be as a 13 year old as part of Peter Brook’s staging of the Mahabharata. Years later, he’s returned to the Hindu epic with a brand new interpretation of its tales, adapting from poet Karthika Naïr’s book Until the Lions a dance work of the same name.

Until the Lions takes narrative inspiration from the tale of Amba (Ching-Ying Chien), a princess untimely abducted on her wedding day by the warrior Bheeshma (Rianto), rendering her unable to marry her true love. Vowing vengeance upon Bheeshma, Amba kills herself on a pyre as the god Shiva tells her she will only achieve her revenge in her next life. Reborn as Shikhandi (Joy Alpuerto Ritter), a princess later given male form, she defeats Bheeshma in battle at last, and seals her destiny as an embodiment of wrath and destruction. 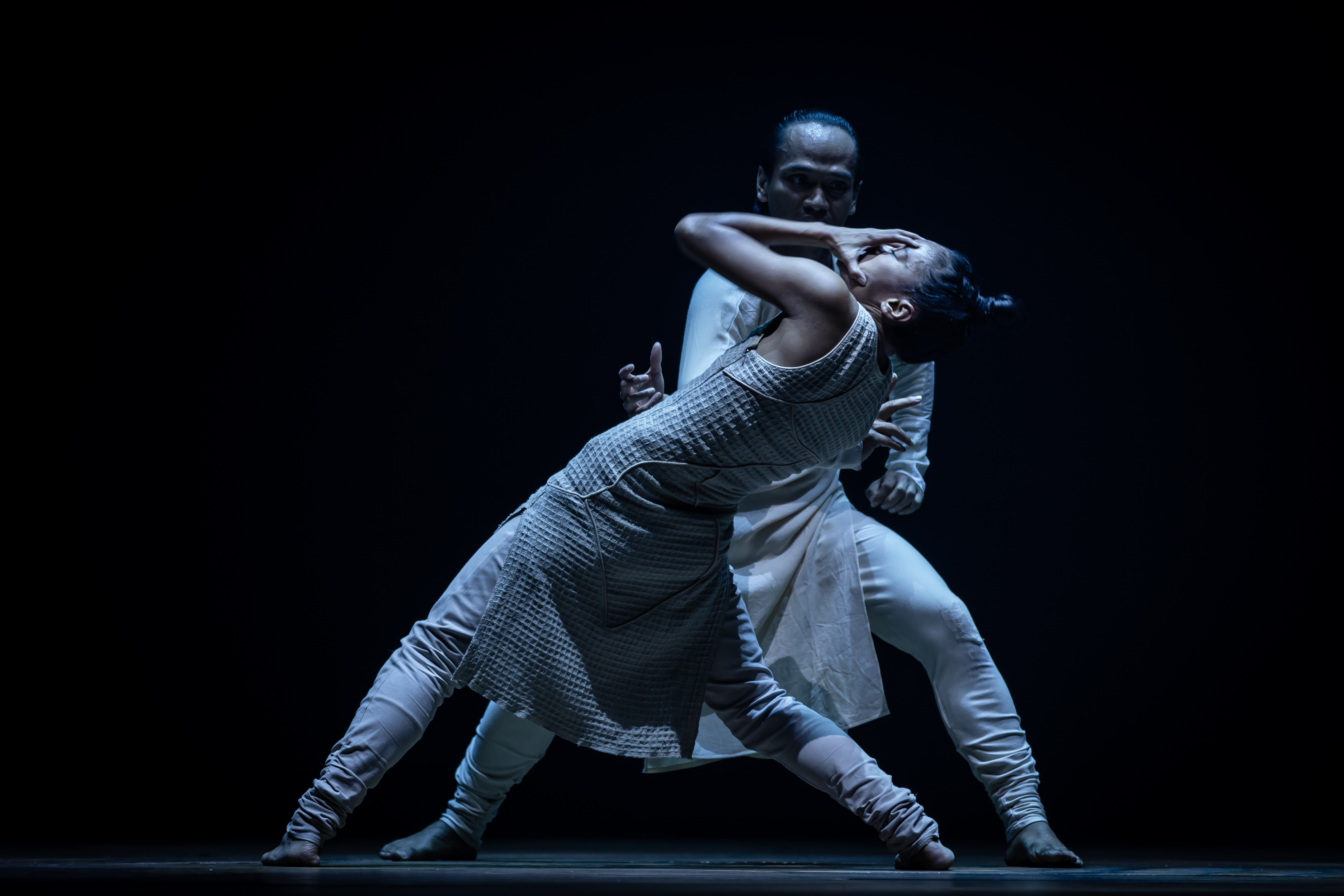 Until the Lions boasts a clever set, with the dance itself taking place on the cross section of a giant tree trunk (designed by Crouching Tiger, Hidden Dragon art director Tim Yip), the rings of age visible and a reminder of the passage of time, of the nature of rebirth and the inevitability of history flowing in a circle. Lights designed by Michael Hulls echo this theme of circularity, forming a ring of light around the set as they flicker in and out in a complicated sequence for dramatic effect (operated by Zak Macro), while four musicians sit around the perimeter of the tree trunk set, stoic as they sing and perform the rhythmic, percussion heavy score by Vicenzo Lamaga, drumming up tension, anticipation, and drama. 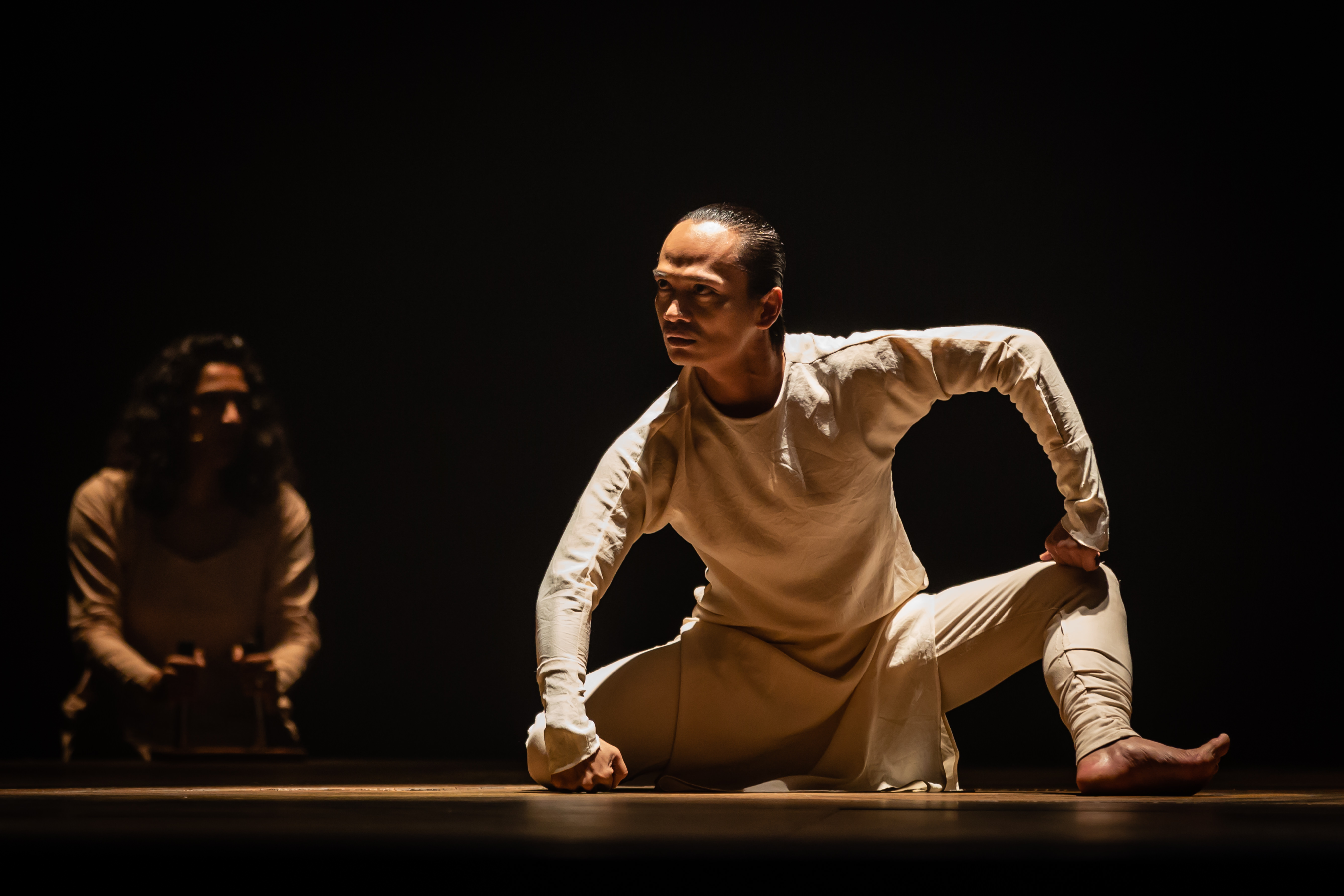 Requiring a slightly different staging in every location, due to the differences in theatre space, it is imperative that the director, choreographer and stage manager work hand in hand with each venue to ensure quick action is taken to adapt each staging for the best possible view. In this case, unusual for the Esplanade, the front half of the stall seats were left unoccupied due to them not being able to offer an optimal view of the stage, testament to the Esplanade’s continued efforts to ensuring audiences are able to appreciate the full extent of the performance. While the distance might have posed as a potential challenge, it was due to the dancers’ skill, energy and efforts that audiences in attendance always felt close to the onstage action.

From the moment the lights dim, we’re already thrust straight into the heart of the performance, as the movements begin. Khan adopts a number of styles in his choreography, marrying contemporary dance and classical Indian dance form kathak with intelligent storytelling in its purest form. While most of the choreography has already been determined, dancers are allowed to weave in their own sense of personality and improv – Javanese dancer Rianto as Bheeshma for example, comes onstage with Indonesian dance movements, weaving his own training into the work and establishing his own identity outside of the character. All three dancers have reached a point where they are essentially their characters, magnifying them to feel larger than life, legendary almost, and using their boundless energy to communicate and evoke this in each and every audience member in the theatre. 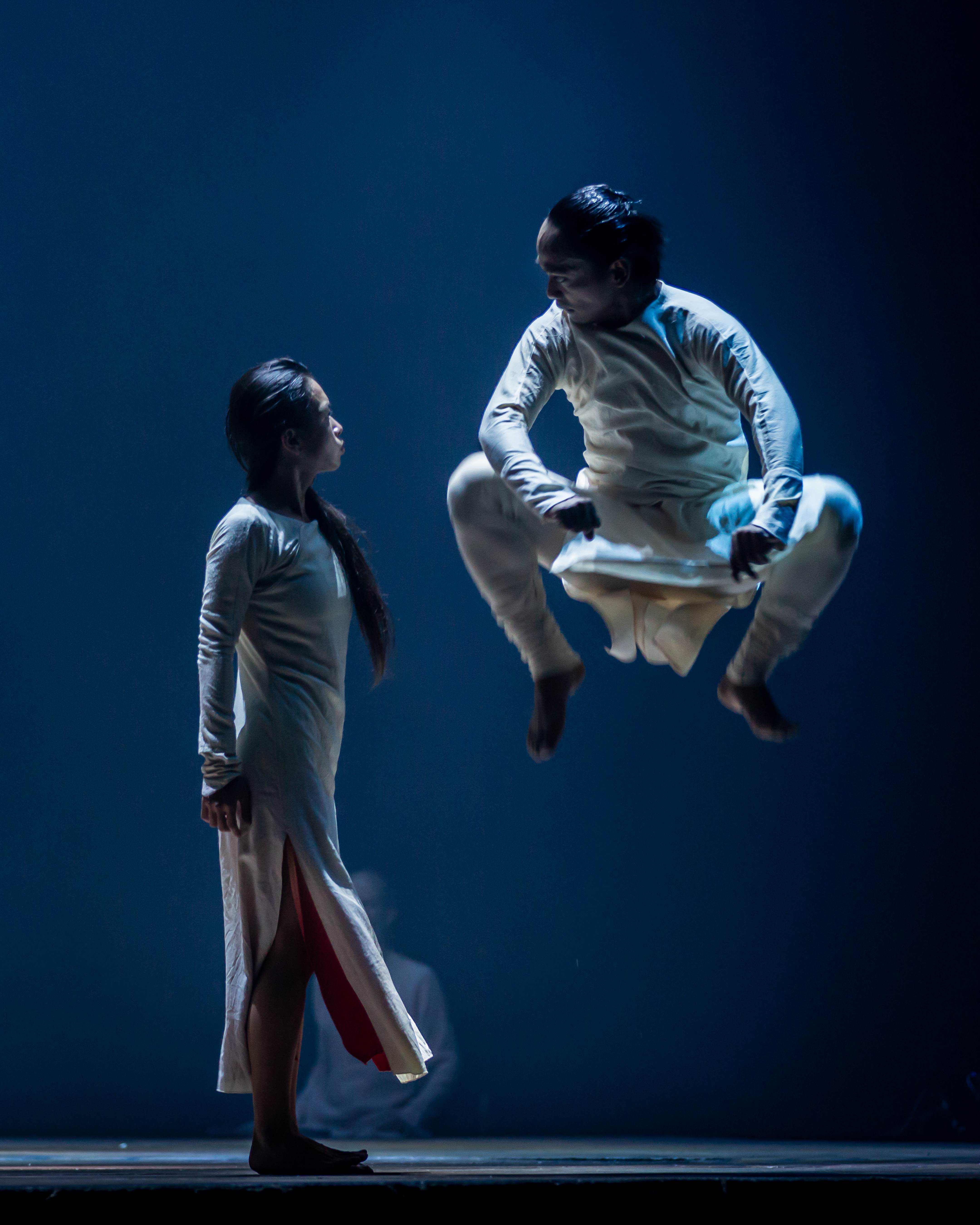 There is nothing but precision and energy that emanates from every expressive, emotional movement onstage, many of which again, go back to the idea of circularity as the dancers pace the perimeter, turn revolutions and grapple back and forth with each other. Tempos rise and the dancers move more vigorously in accordance, while songs crescendo to battle cries. One is both disturbed and gripped by the moment Amba throws herself onto the pyre as she ends her life, as dancer Joy Ritter, in taking over as Shikhandi, appears possessed as the instrumentation celebrates the reincarnation process, her movements twisting and body writhing, eerie yet profoundly beautiful as she becomes a symbol of hope and inherits the wrath from her predecessor. 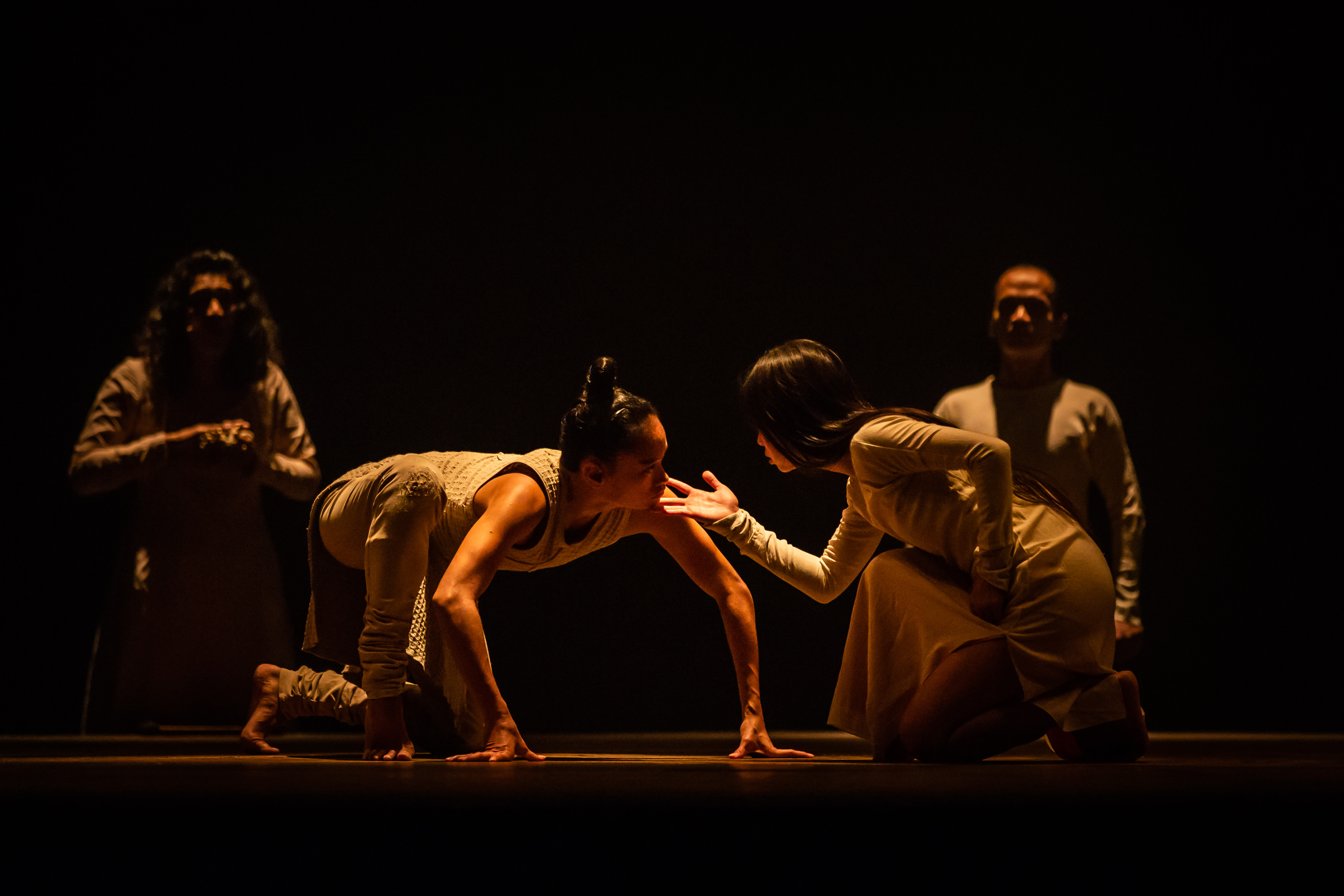 The performance climaxes in the final fight scene, as all three dancers come onstage at the same time – while Shikhandi and Bheeshma wrestle, the spirit of Amba paces the tree trunk like a ghost as she looks on and mirrors Shikhandi, the power of two souls in one besting their greatest foe together. As the final blow is dealt, one hears the singers chant “It’s time to begin”, as bamboo arrows clatter to the ground and a crack in the trunk opens, light and smoke pouring forth. The wrongs of the universe have been righted, and it is simultaneously a triumph and a cosmic level force to be reckoned with as this chapter ends and another begins, with the spirit of vengeance moving on to other pressing matters to attend to. 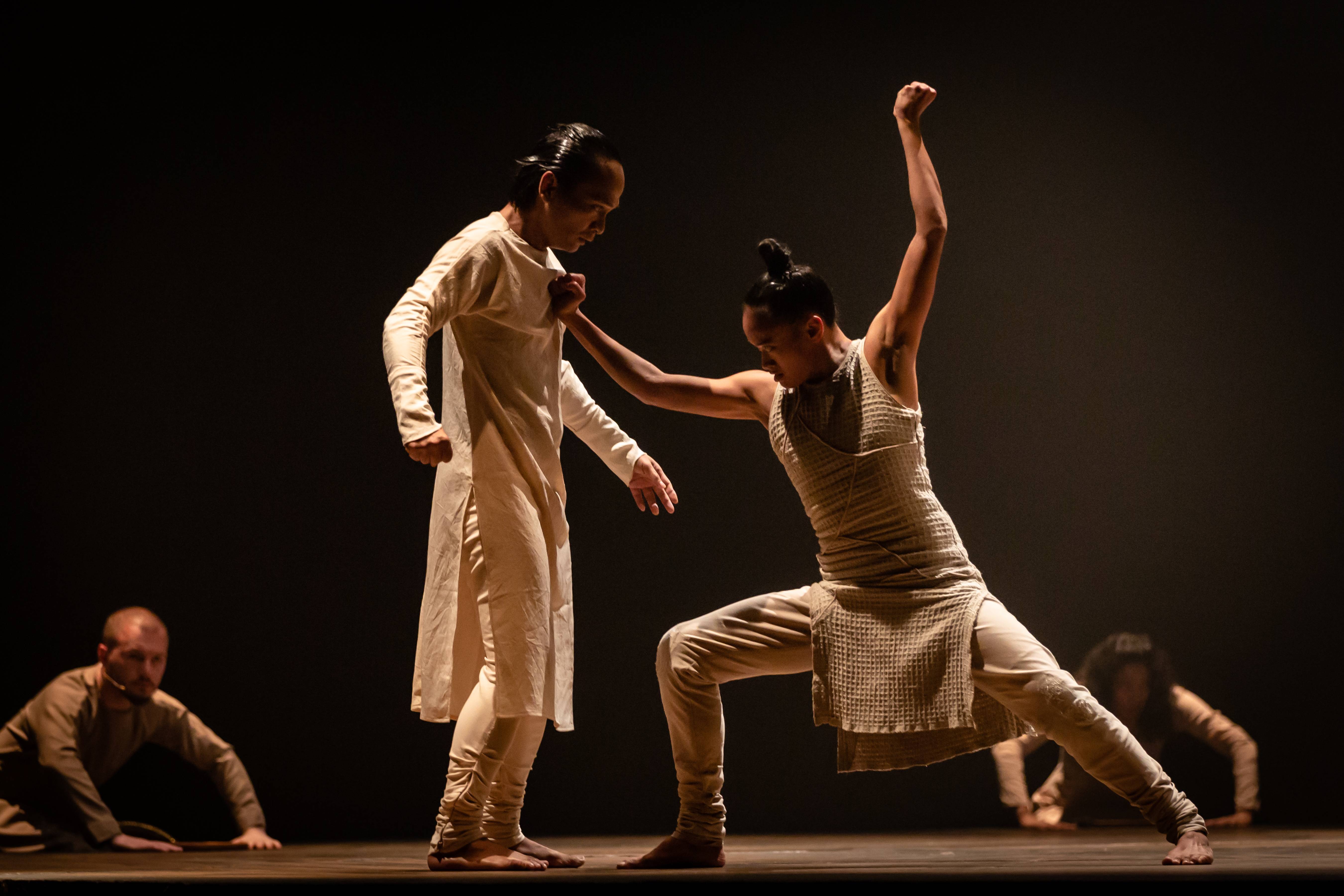 Until the Lions is a classic tale of revenge, yet much like the Ugbo proverb it takes its name from, there is an even greater sense of justice and satisfaction gained from such a move, as a woman spurned is finally given the space and platform to tell her story in her own voice and her own power. Viscerally devastating and a visual feat from start to finish, Until the Lions shows Akram Khan’s legendary storytelling skills at its best, revitalising the Mahabharata as it pulsates with life in every step, every turn, every beat of the drum.

Photos by Bernie Ng, Courtesy of Esplanade – Theatres on the Bay