In January 2019, the M1 Singapore Fringe Festival is returning for its 15th edition! Announcing the programme in a launch party at the Esplanade Annexe Studio yesterday, this year, the annual arts festival has curated works that respond to or parallel Singaporean artist Suzann Victor’s Still Waters, the second time the festival will be adopting this format after last year’s programme surrounding Amanda Heng’s Let’s Walk.

Victors’ Still Waters was a performance art piece that premiered in 1997, as the artist filled a drain on the second floor of the Singapore Art Museum with blue water that reached above her ankles. This drain was located outside clear glass panels that separated the museum from external elements, where Victors performed as if trapped behind the panels.

At a time where performance art was still banned, Still Waters then represented a form of protest to represent the ‘fugitive status’ of the performing body in Singapore. Now, 20 years on, with the ban on performance art lifted, Suzann will once again return to the work with Estrangement and Reconciliation on 12th January 2019, as she engages in conversation with Fringe artistic director Sean Tobin to discuss issues of aesthetics, body politics and space, and the contentiousness of art-making. 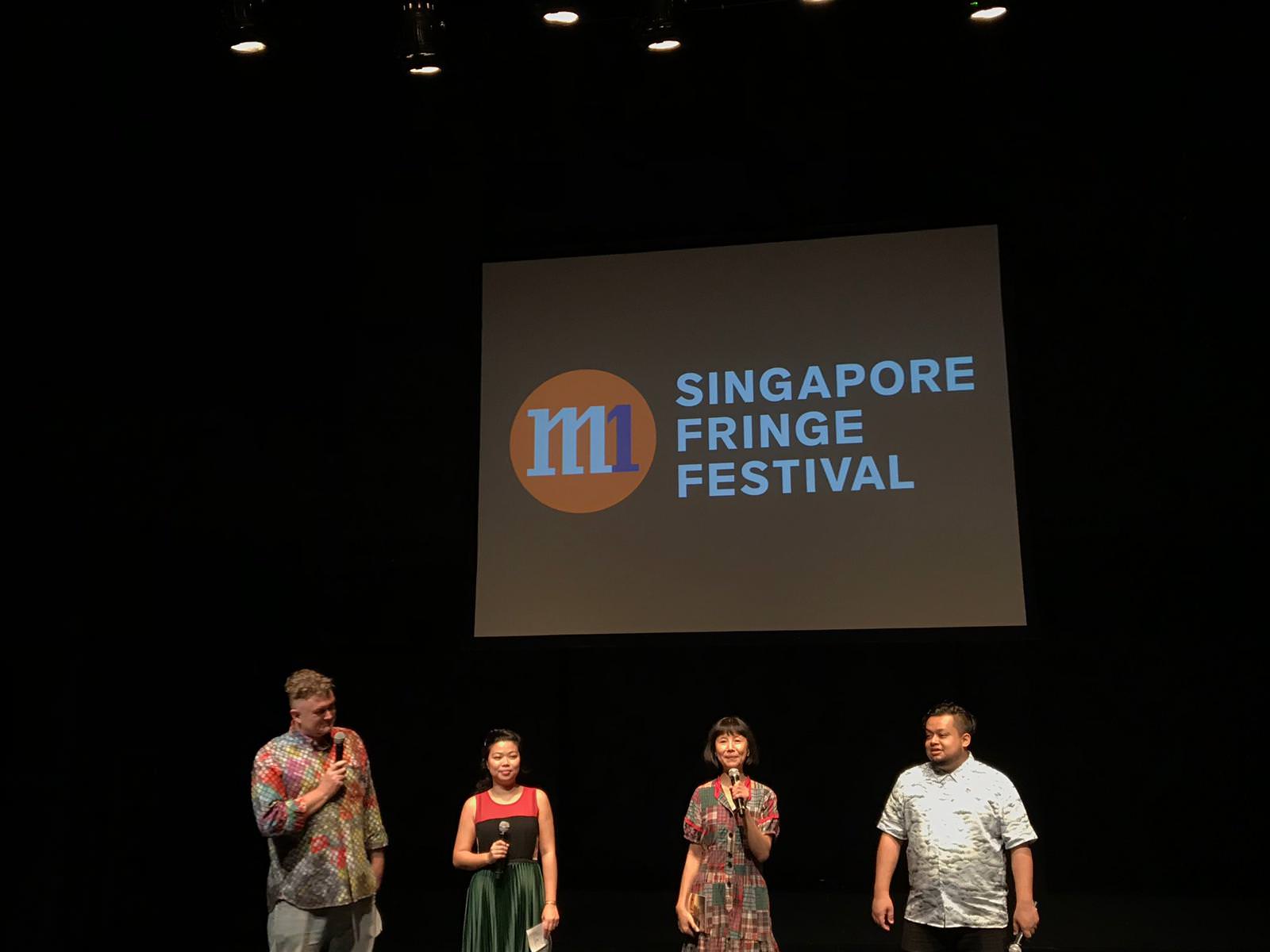 With this in mind, the 2019 M1 Singapore Fringe Festival has gathered and finalised the works of 12 groups of local and international artists to be presented at the festival, held from 16th to 27th January across various locations in Singapore. Each work considers the value and message behind Still Waters, responding to or relating to its themes. 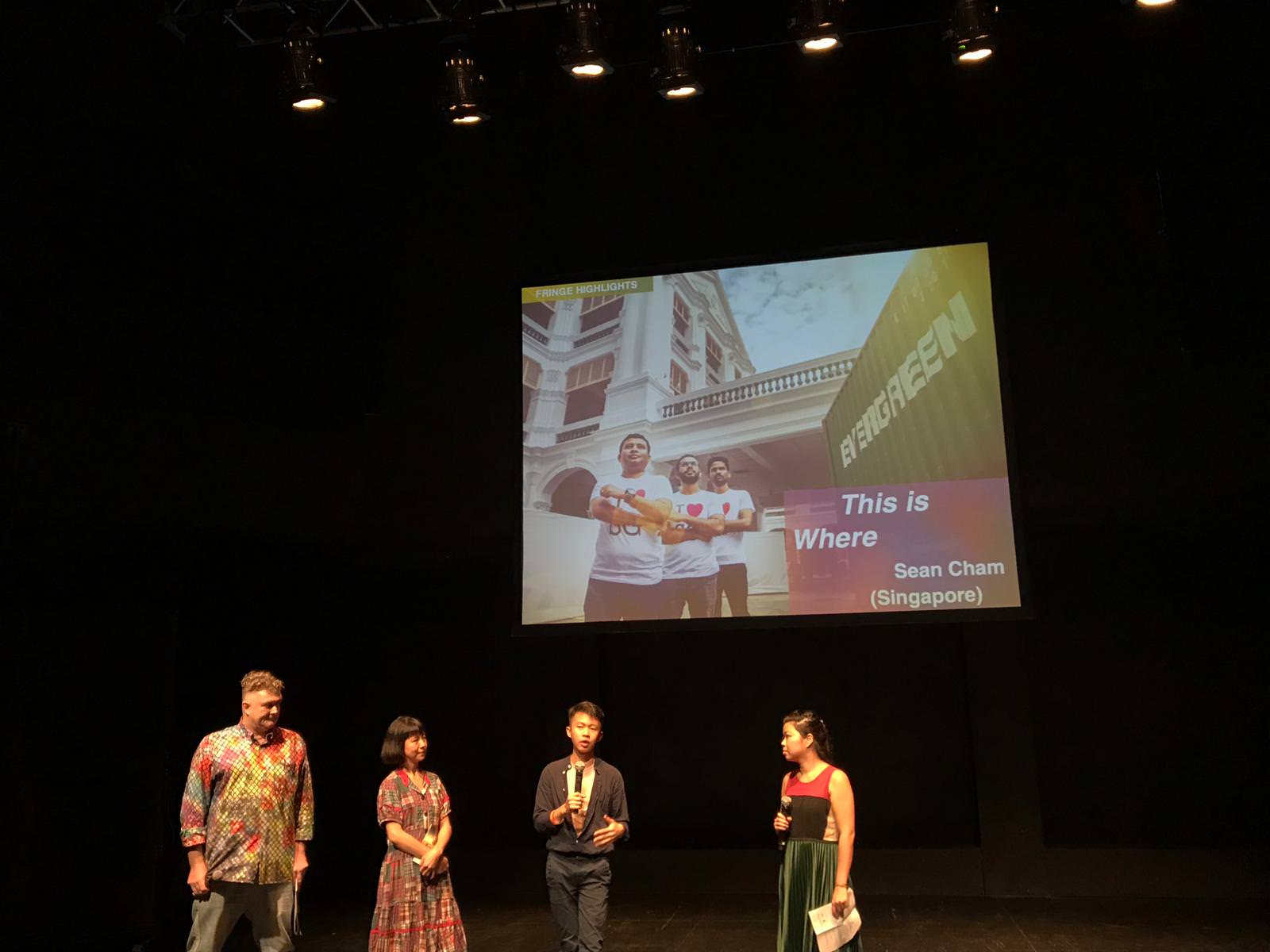 As with every Fringe, next year’s edition will shine a spotlight on a visual artist, this time featuring young artist Sean Cham. Best known for photography work collected online and in published volumes such as YESTERYEARS, Cham’s work will be the earliest audiences can catch a glimpse of, as This Is Where will be on display from 29th December 2018. But perhaps unusually, This Is Where will not be presented in a traditional gallery space, but on selected JCDecaux bus shelter ad spaces, toeing the line between the commercial and the artistic. These ad spaces will become canvases as Cham shows portraits of migrant workers left on the fringe of society, each shot telling a story of people who want desperately to call Singapore home but are afraid to, unabashedly displayed in the open and freely available to view by society in such public spaces. 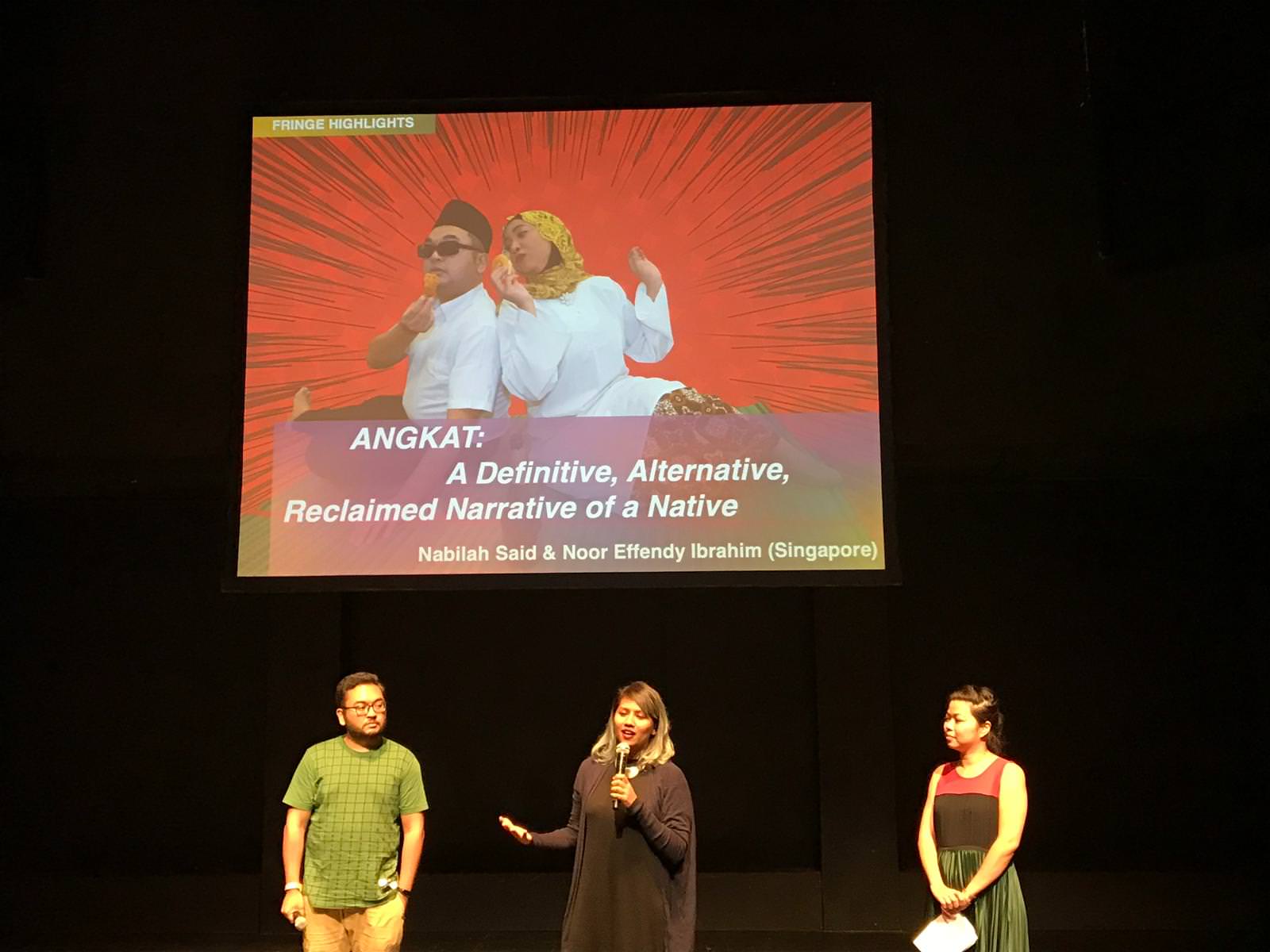 Other Fringe highlights to look out for include French/Lebanese artist Hanane Hajj Ali’s one woman show Jogging: Theatre in Progress (receiving critical acclaim at the Edinburgh Festival Fringe) and Angkat, by Malay theatre veteran Noor Effendy Ibrahim and writer Nabilah Said, who has recently returned to Singapore following completion of her studies in the UK. A different version of Angkat was previously staged by Teater Ekamatra back in 2017, which was conceptualised by Nabillah and devised by the cast.

This time around though, she’s back to deliver “A Definitive, Alternative, Reclaimed Narrative of a Native”, as she takes a character from the original and gives the entire concept a do-over, telling the story of a mother and daughter’s intertwining histories, and of the hidden narratives within the Singapore story. 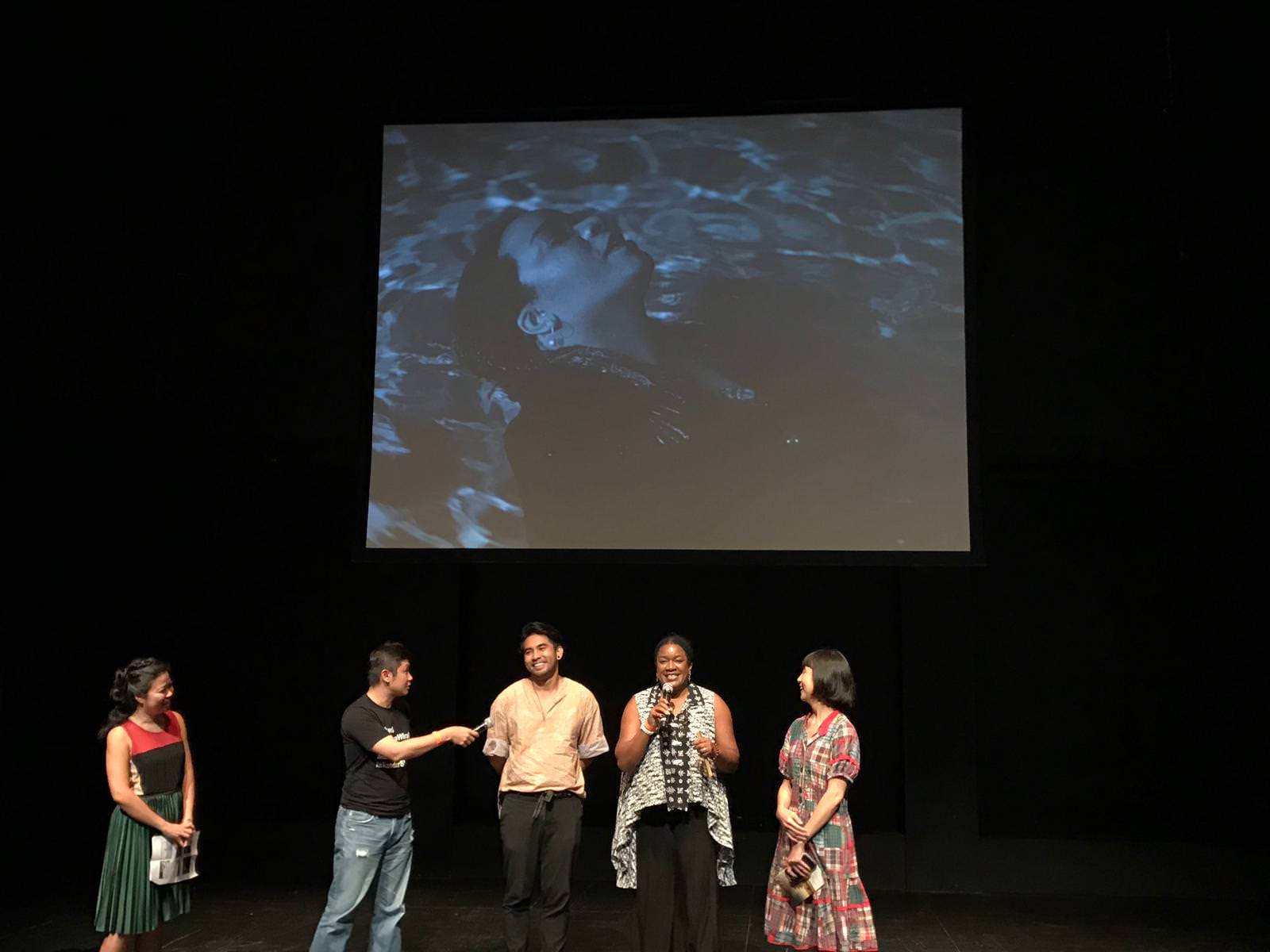 Works we’re personally looking forward to include New Perspectives’ theatre-lecture A Fortunate Man (UK), expanding and exploring John Berger and Jean Mohr’s book of the same name, as well as new work Ayer Hitam, created by Sharon Frese, Irfan Kasban and Ng Yi-Sheng. In this lecture performance, ethnically African Sharon will explore the history and influence of the hidden black history lodged in Singapore’s past, where colonialism and slavery collide as she uncovers the secret links that Africa and Asia share, for example, did you realise that the two continents would be one, if not for the presence of the Suez Canal? 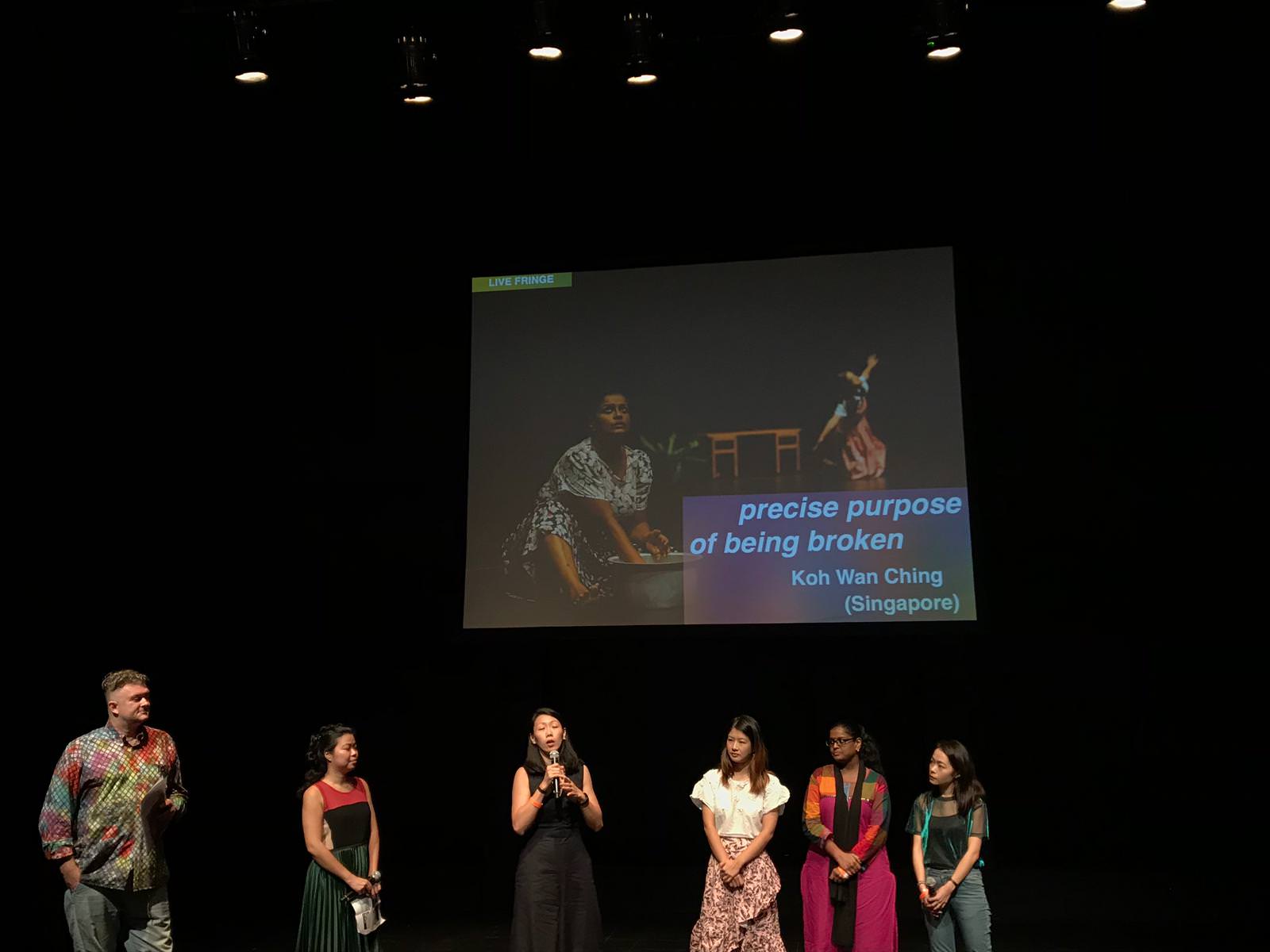 Angkat won’t be the only work given new life by Fringe 2019; audiences may also be struck by Koh Wan Ching’s precise purpose of being broken, which first premiered as a work in progress as part of the Esplanade’s RAW segment of The Studios 2017. In line with the theme of The Studios that year, which celebrated 30 years of playwright Haresh Sharma’s work, precise purpose of being broken takes inspiration from Haresh’s body of work, bringing them together and teasing out their inexplicable connections. 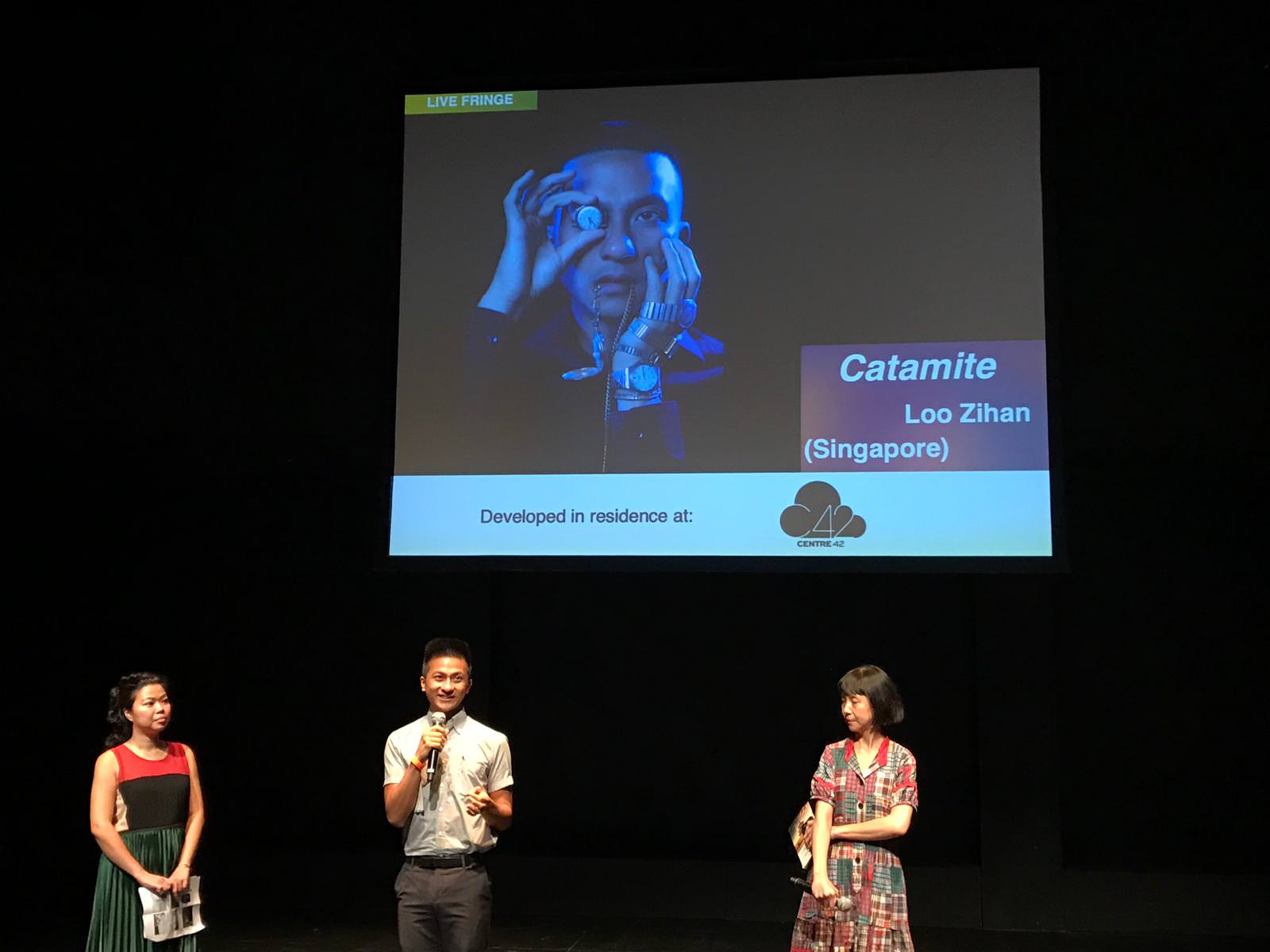 Yet another familiar Fringe face to look out for would be artist Loo Zihan, who re-created performance artist Josef Cane’s Brother Cane during a sold out performance held at the 2012 M1 Singapore Fringe: Art & Faith. Loo is now back with Catamite, predicted to sell out quickly with only 20 tickets per show. The work’s title is an explicit one, referring to a pubescent boy in ancient Greece and Rome kept for pederastic practices, and naturally, Loo will take audiences on a journey as they explore ‘queer objects’, Section 377A of the Penal Code, and identity itself. 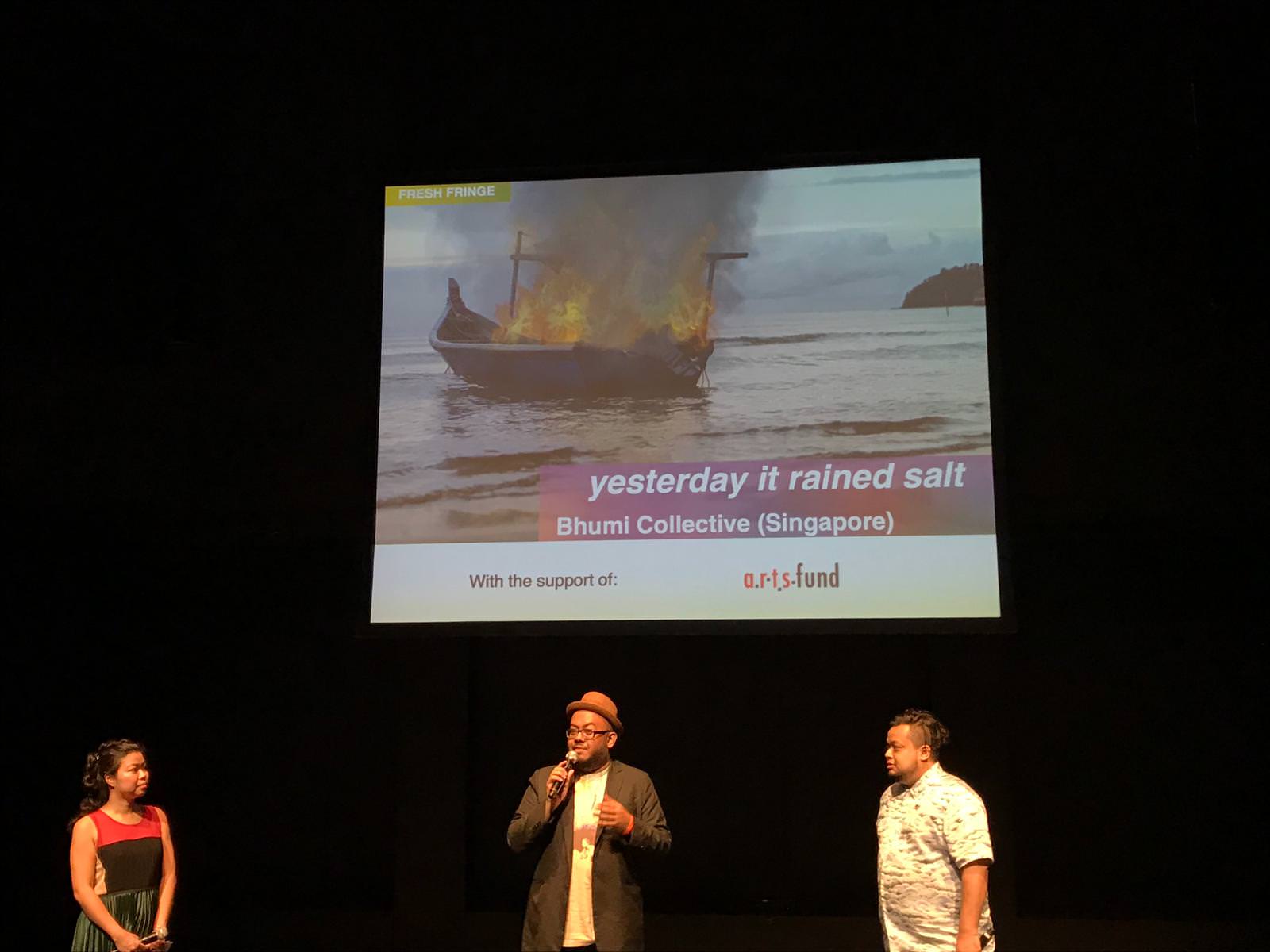 Returning to Fringe 2019 is the now quintessential aspect of the festival: Fresh Fringe, where new works in progresses are shown to a test audience. Unlike last year’s venue of the Esplanade Rehearsal Studio however, this year sees both works playing at the Esplanade Annexe Studio instead. The first of these works is Bhumi Collective’s yesterday it rained salt. First presented as a 10 minute piece at London’s Bunker Theatre in October 2017, yesterday it rained salt is the second of Nabilah Said’s plays to be making an appearance at Fringe 2019, featuring choreography by Norhaizad Adam to explore the violence of departure and return and the comfort one can find in memory and rituals. 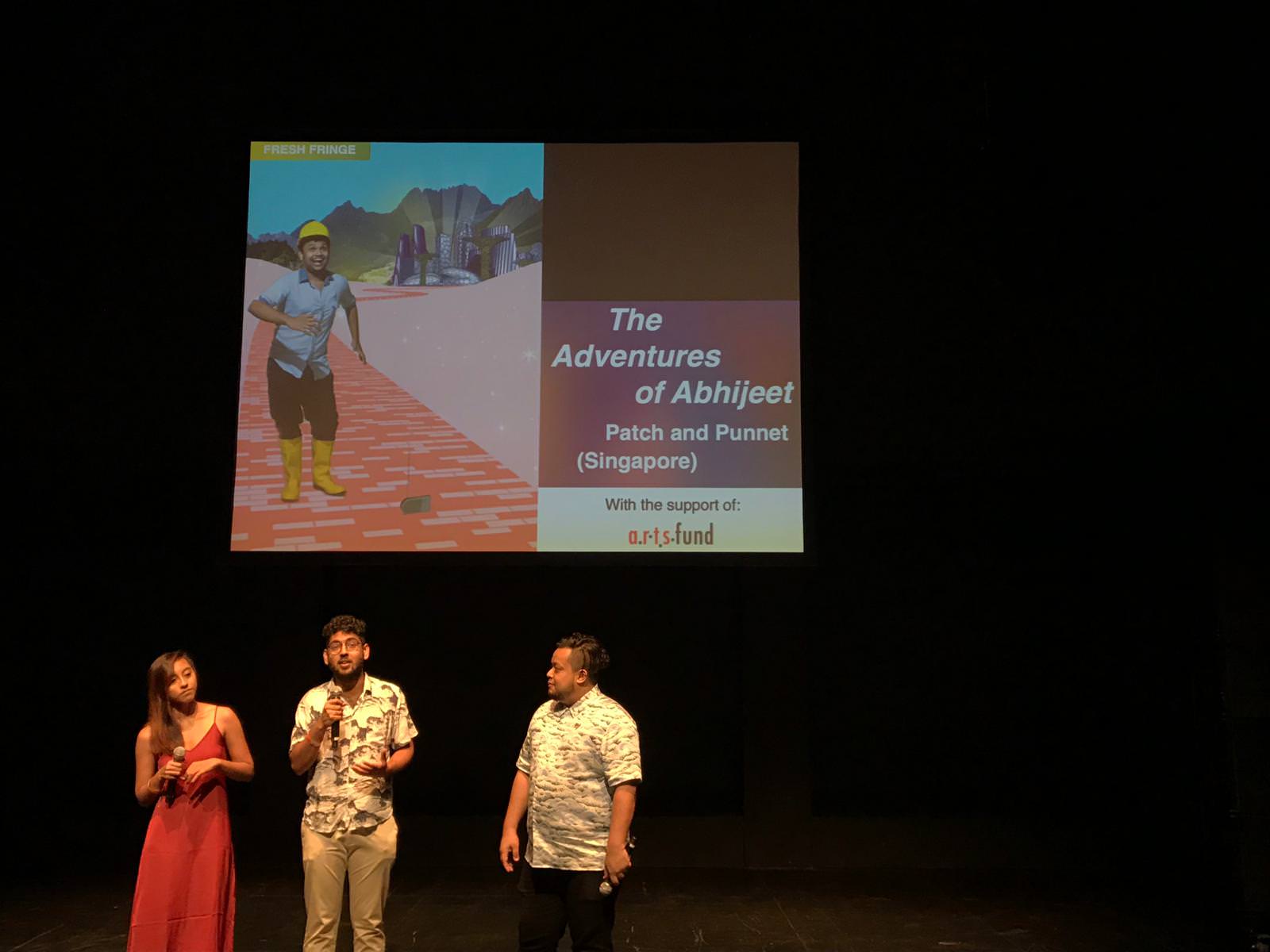 Meanwhile, youth theatre company Patch and Punnet delivered a surprisingly promising production earlier this year, showing a far clearer direction and aesthetic than was first seen back in 2017, and for Fresh Fringe, present yet another new work. Once again featuring Jit Dastidar as their poster boy, The Adventures of Abhijeet is a modern fairy tale adventure as the titular Abhijeet attempts to save his dying daughter in a journey to the magical paradise of Singaland.

Other works in the Fringe lineup include Unholy Mess’ Above the Mealy-Mouthed Sea (UK), dance performance Q&A (The 36 Questions) by Rachel Erdos and Dancers (Israel) and Singapore-based Australian artist Edith Podesta’s Kaspar, in which she will work together with students from the Nanyang Academy of Fine Arts. 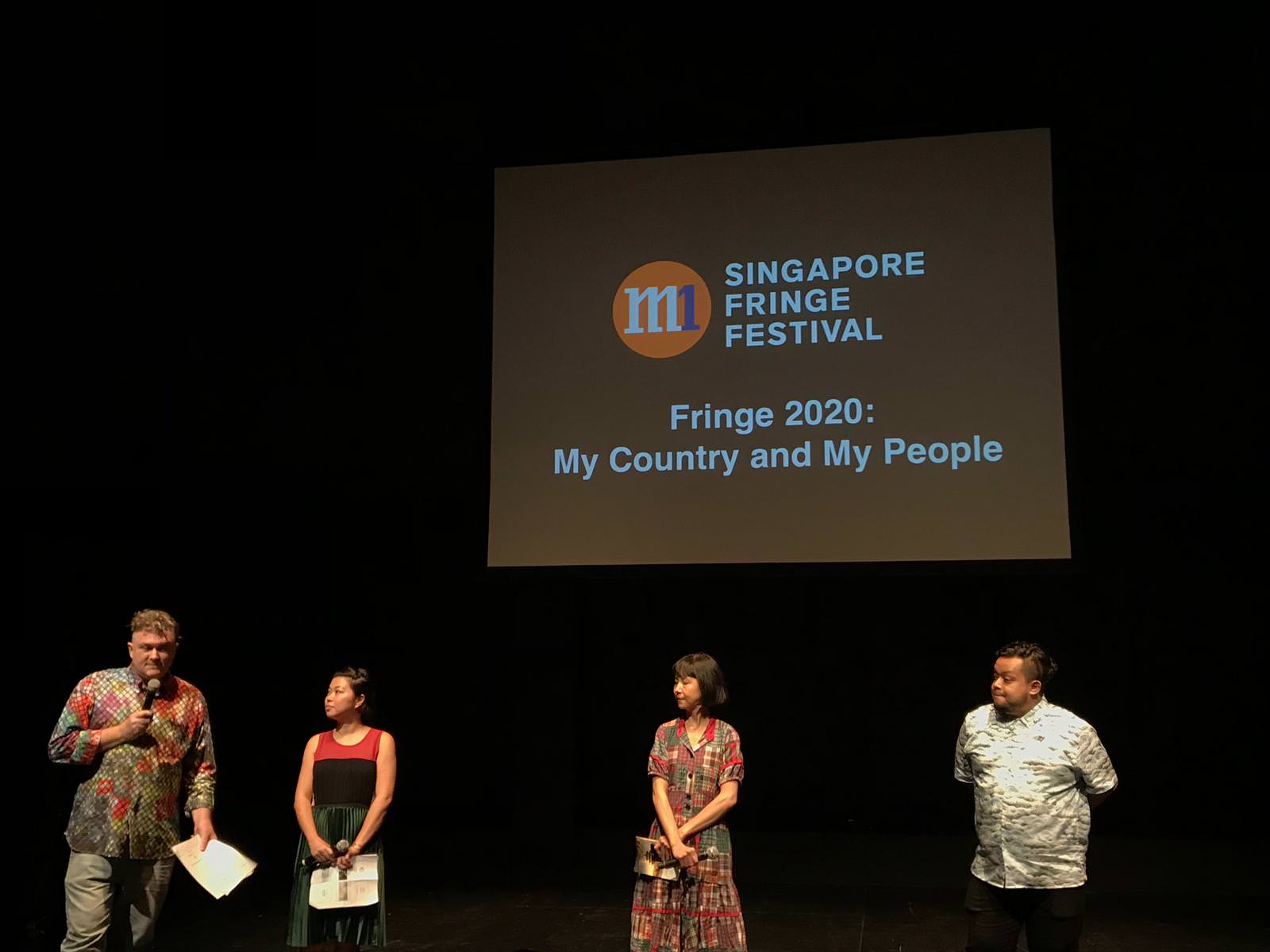 While the 2019 Fringe hasn’t even begun yet, applications for the 2020 Fringe are already open, with the organisers looking for works responding and relating to writer Anne Lee Tzu Pheng’s poem My Country and My People. M1 Singapore Fringe Festival 2019 may be themed Still Waters, but if anything, it’s sparkling, as we usher in this veritable selection of works to start off the year in arts, and welcome 2019 with plenty of engaging performances and displays set to leave one disturbed, moved, and provoked with thought.

M1 Singapore Fringe Festival 2020: My Country and My People runs from 8th to 19th January 2020. To apply and for more information, visit their website here (Deadline: 31st March 2019)