Two plays that discuss issues of identity, trauma, and loss.

A state of pure bliss and peace is what comes to mind when thinking of the word ‘honeymoon’. Yet as wonderful as it is, a honeymoon is also defined by its temporal nature, the calm before the storm of marital strife and uncertainty in the years to come.

The title of Teater Ekamatra’s Bulan Madu then makes perfect sense, when interpreted not as its literal translation of ‘honeymoon’, but the period that comes after. Written by Alfian Sa’at around 20 years ago, the two plays featured in this double bill show characters finding themselves in unhappy positions as they navigate newfound insecurities that leave them in states of limbo, fighting forces both internal and external that threaten to tear them apart as they recall better, honeymoon days. 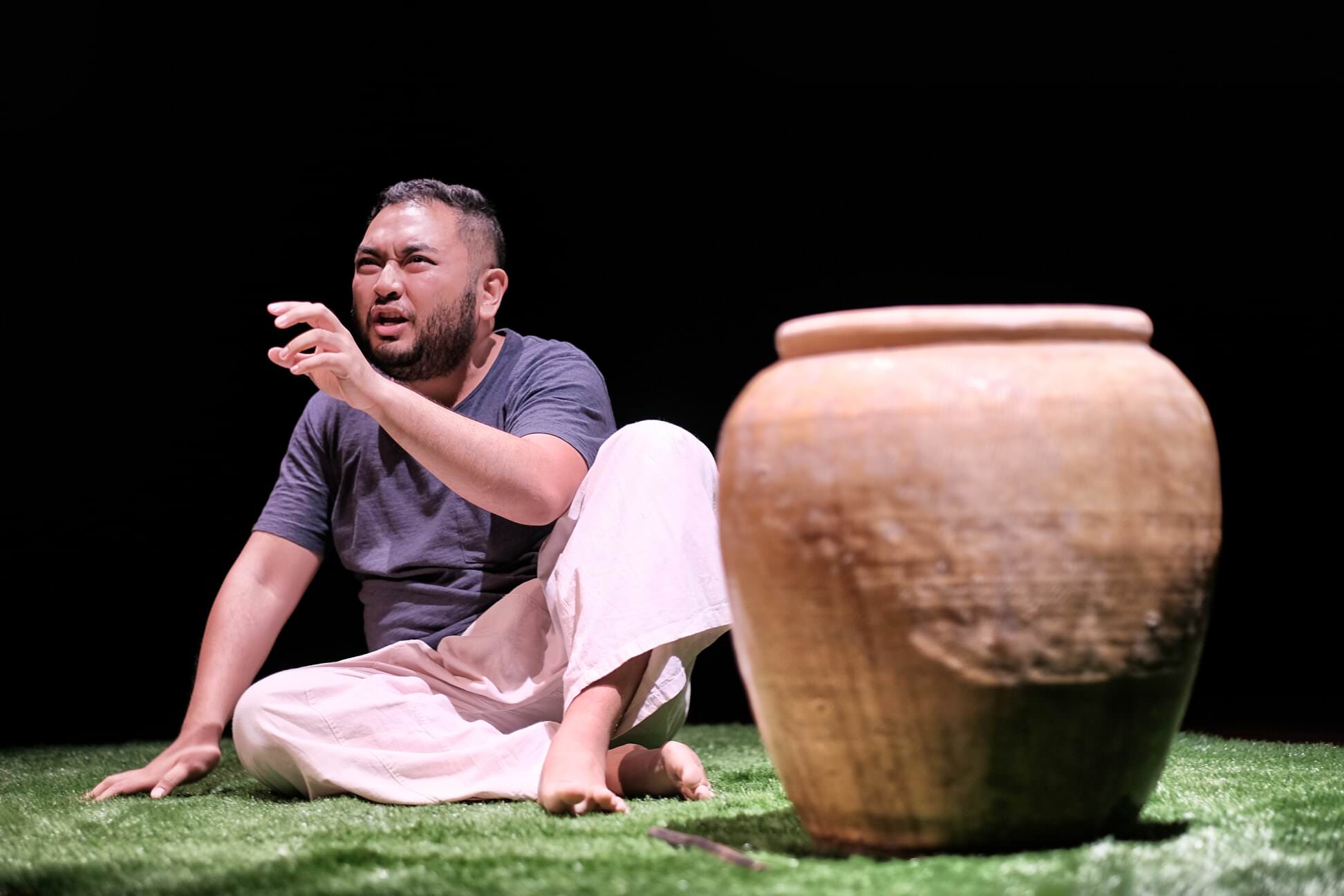 The double bill begins with Anak Bulan di Kampong Wa’Hassan, a monodrama directed by Noor Effendy Ibrahim and starring Adib Kosnan. The play begins as Adib ‘recalls’ the process of creating the play (one that the original performer, Gene Sha Rudyn was part of and helped devise in his run), with he and Alfian visiting the titular Kampong Wa’Hassan, the last kampong in Singapore to conduct research and interview its residents before its demolition. 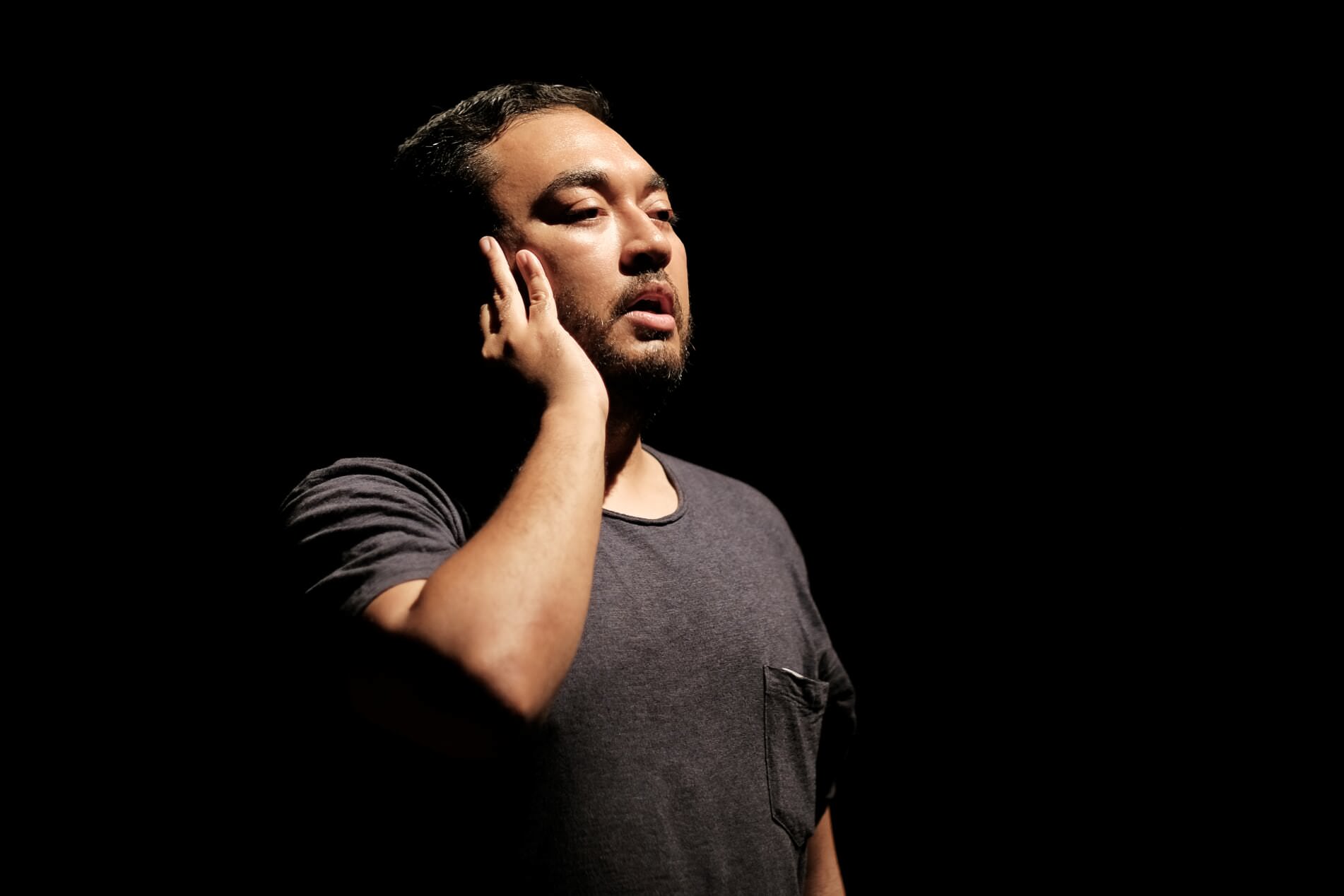 Over this monodrama, we’re introduced to the myriad of characters who call this kampong their home (all played by Adib) – there’s the caretaker of the mosque, a bright eyed teenager, the mysterious stranger from Selangor, a makcik, a surprisingly sober drug addict and more. Perhaps it is is testament to just how intertwined these kampong residents’ lives are that Alfian’s poetic script segues from one character to the next like water – there are times it takes a couple of seconds to realise that we’re being addressed by a new character. 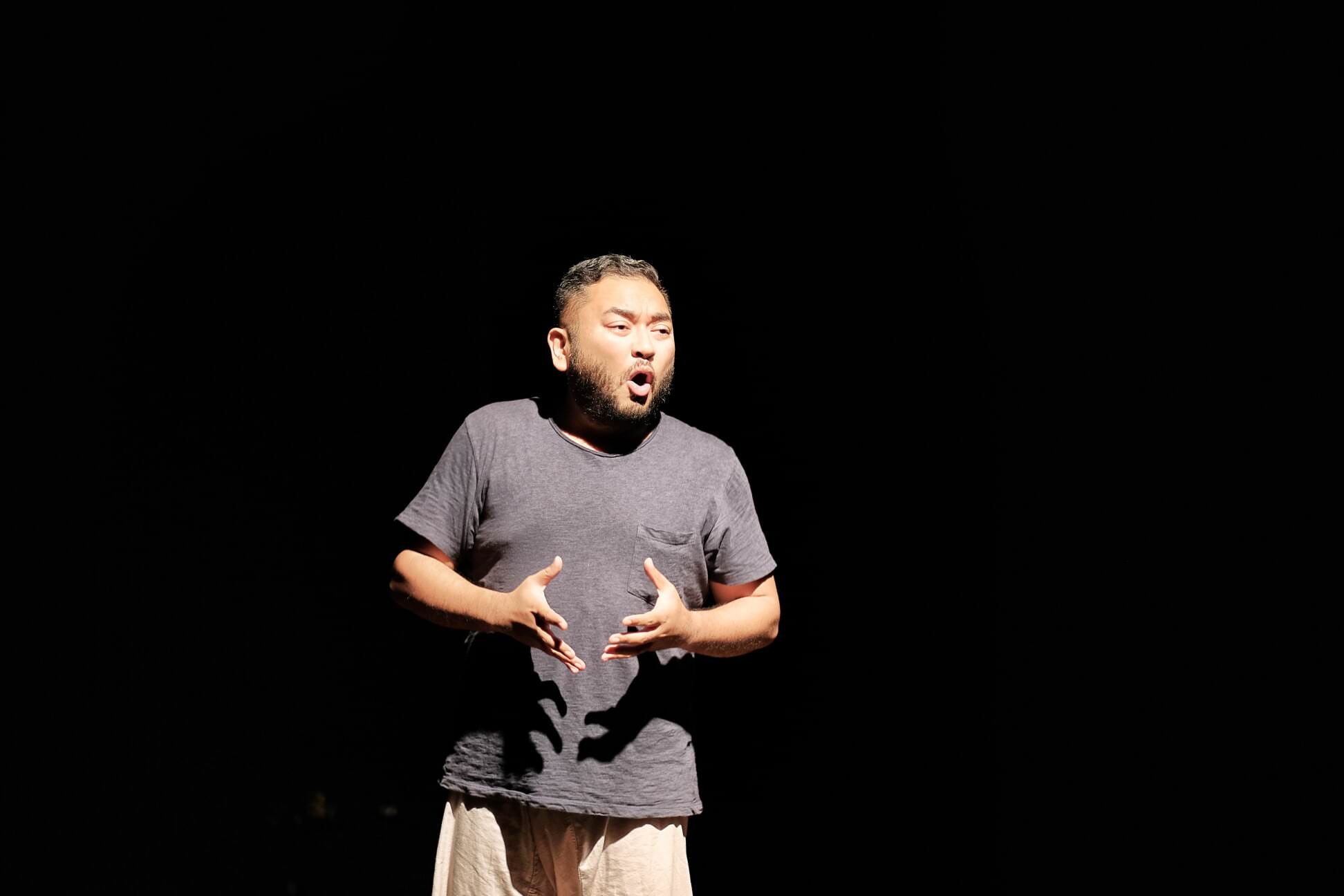 While certainly a challenge for any actor to embody and present all of these characters over an hour, Adib Kosnan does well to perform and differentiate each character. Armed only with a ceramic pot of water as he splashes his face and washes his hands to indicate transitions, one also sees a distinct change in physicality and voice with each new character he plays, as if channeling their individual spirits each time he changes character. 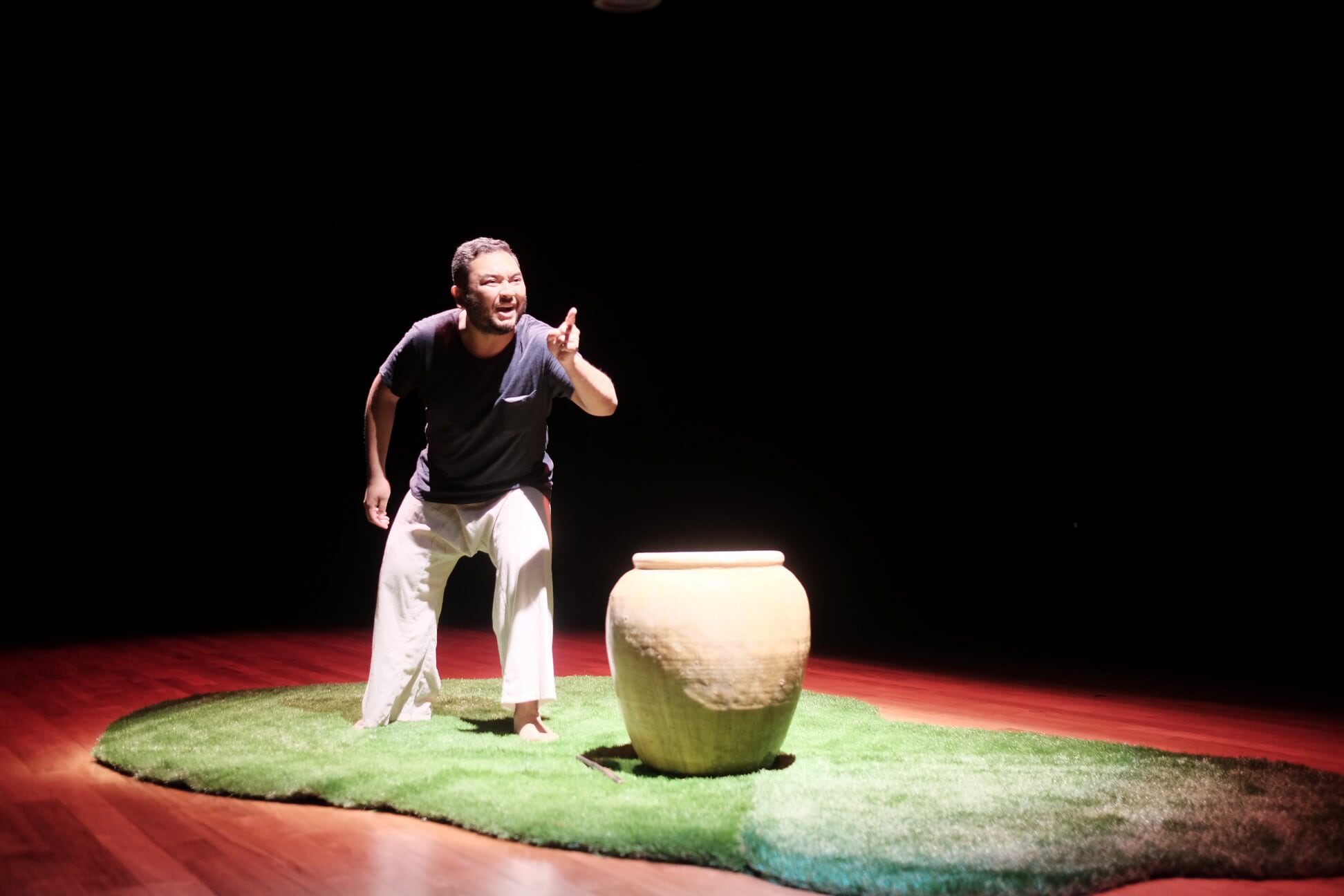 While the script is occasionally difficult to follow due to the initial lack of a clear narrative and the multitude of characters we are introduced to, often in media res and ending abruptly before shifting to the next, it is ultimately the smallest of moments that gives this play its emotional core and make it work. We hear from the teenager bursting with desire to run away with the stranger as she laments the incomparability of their kampong to the sprawling ones in Malaysia, who in turn reveals a surprising secret about the dangers of a backward, small town mentality. In another instance, it is simply the announcement that a search party has been called off for a missing girl on account of how little manpower is available in the kampong that makes us realise that this is a structure no longer viable in the modern world. 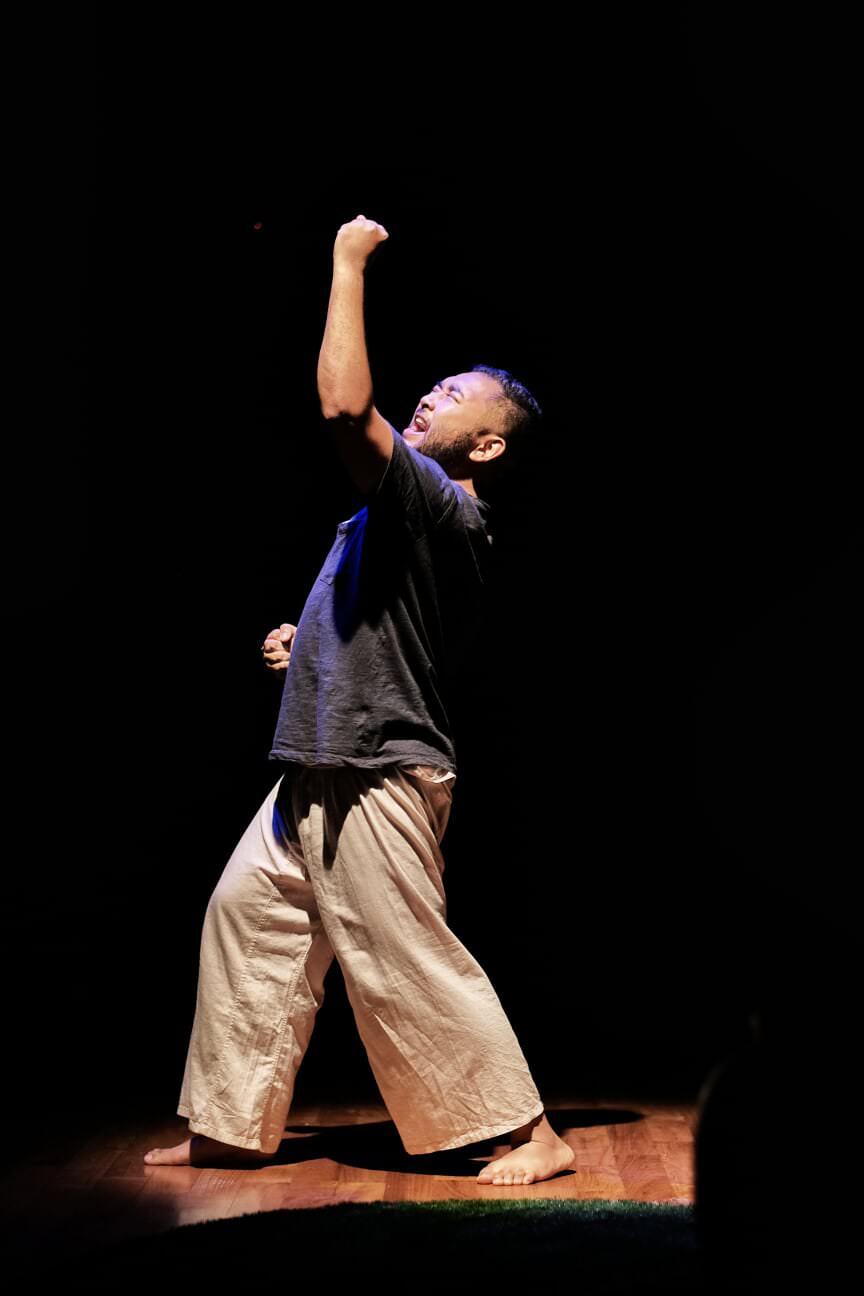 As much as we’d love to hold on to the past and revel in simpler times, maintaining the kampong would only create an enclave that simply will not gel with increasingly cosmopolitan Singapore. Watching Adib onstage, one cannot help but feel the sense that this is a man the world has overtaken and left behind, alone in his memories and fears and rants. Perhaps then, there are things we must accept are best left in the past, appreciating whatever remnants still exist through nostalgia. In the final scene, we hear a prayer bell and Adib recites the Azan – there’s a new moon rising (‘anak bulan’), and as much as we have come to be endeared to these characters, they are fleeting, temporal as we choose to wilfully forget them, the endless beat of progress erasing them for now, left only as a memory of what once was. 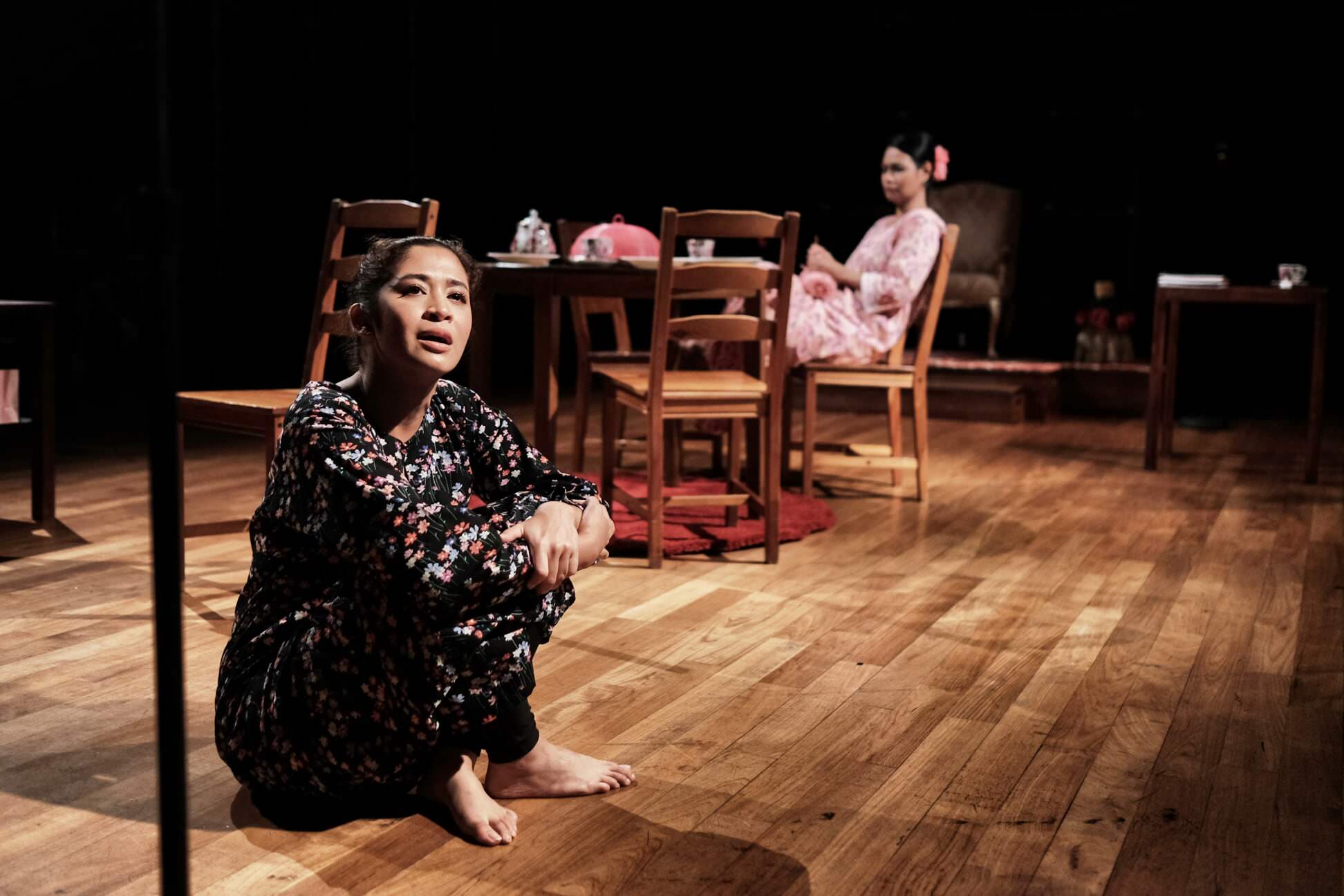 The second play, Madu Dua is a two-hander directed by Ekamatra artistic director Mohd Fared Jainal, starring Siti Hajar Abdul Gani and Munah Bagharib as two wives married to the same man in a polygamous relationship. Bookended by choice voice clips from P. Ramlee’s comedy Madu Tiga highlighting collusion between men and portrayal of violent female jealousy onscreen, Madu Dua acts as a response to the film, imagining polygamy from the wives’ perspective and expanding on how these wives might feel towards each other. 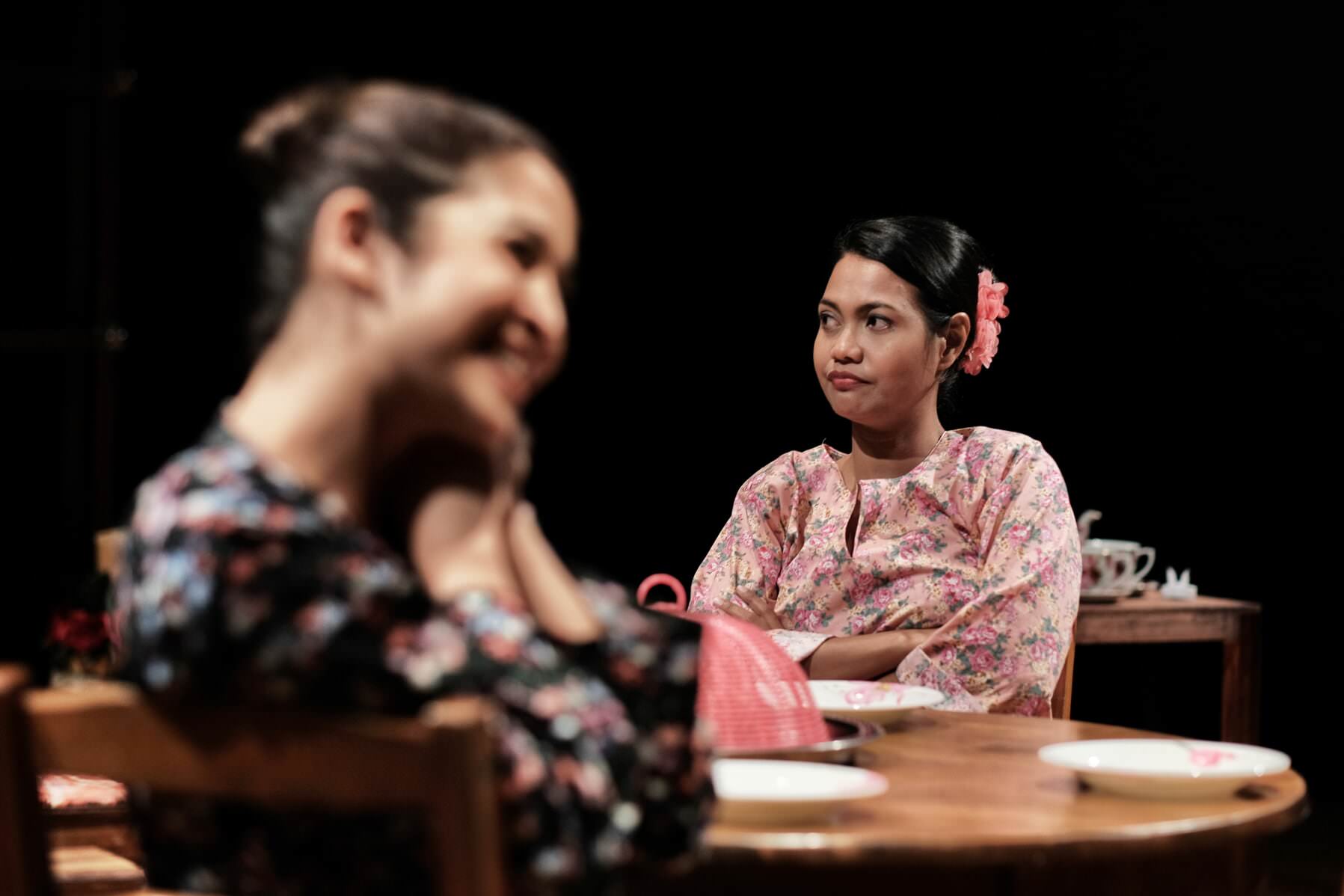 Madu Dua opens with an introduction of both characters – thirty-five year old Kamariah (Siti Hajar) is the first and older wife, who enjoys crocheting and is a master in the kitchen, yet is unable to conceive. Twenty-three year old Suhaila (Munah Bagharib) is the newly wed second wife, who loves reading women’s magazine and is seemingly pregnant with child, but hides scars from her past. The play follows their interactions as they sit waiting for the return of their husband Hisham from work a la Waiting For Godot – he never appears, yet his presence is constantly felt, perhaps a representation of the invisible power and influence of men in society, and both wives even wonder if he might be about to take a third wife. One also appreciates the constant ticking sound heard in the background, a reminder of the passage of time and an almost terrifying countdown to something terrible about to happen (but never does). 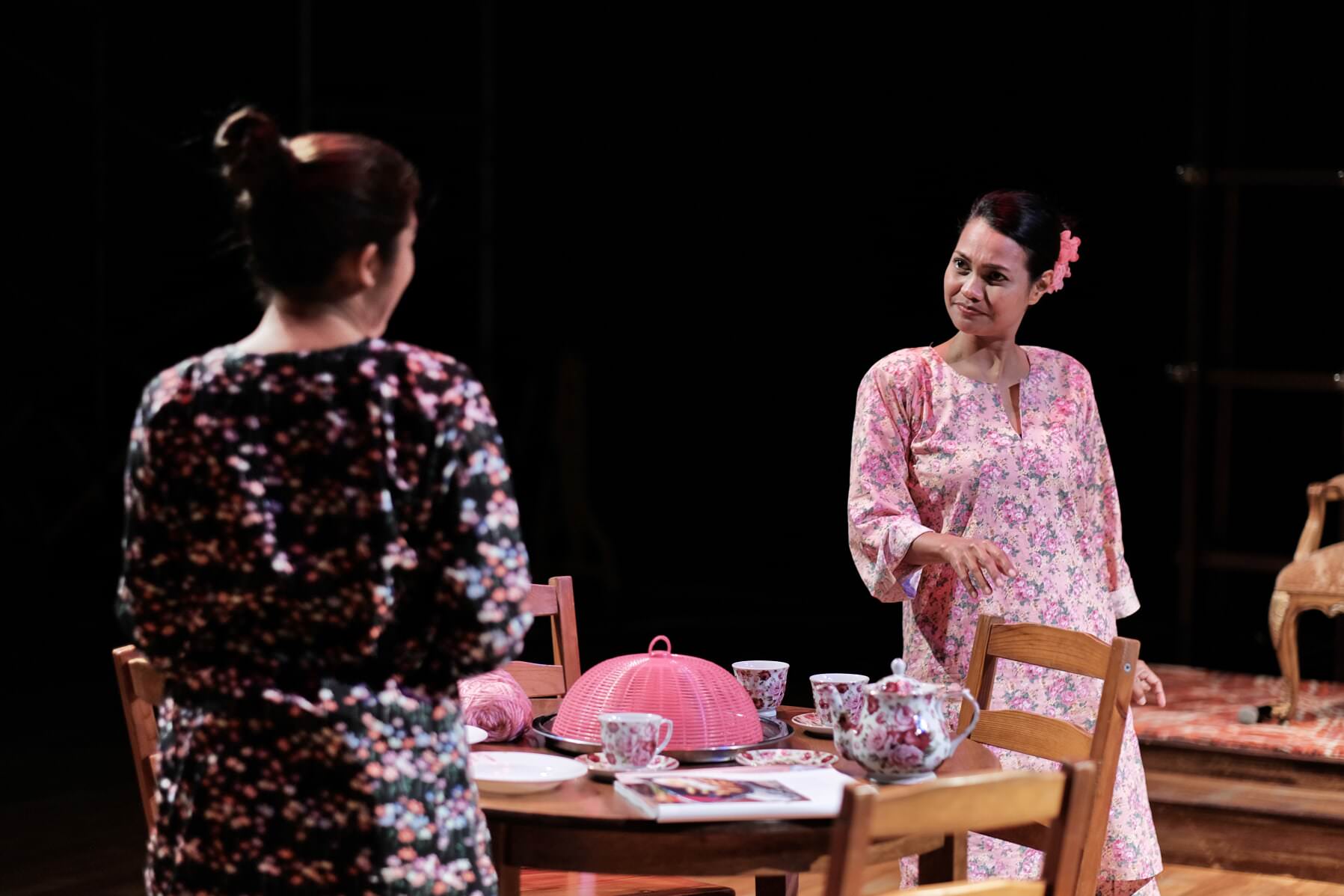 Having set up the core differences in their situation and characters, an uneasy tension exists throughout Madu Dua as Kamariah and Suhaila begin a game of cat and mouse, goading and jabbing at each other through smiles veiling judgment and distaste as they wrestle with their own personal demons. There’s plenty of fun to be had watching these two have a go at each other, helped by the incredibly strong chemistry betweens actresses Siti and Munah. From a witty war on wordplay surrounding the word ‘hati’ (heart/liver) to a talk-show segment where each wife becomes ‘Oprah’ taking turns to grill each other, Alfian’s script is laced with surprise twists at every corner that keep things interesting. 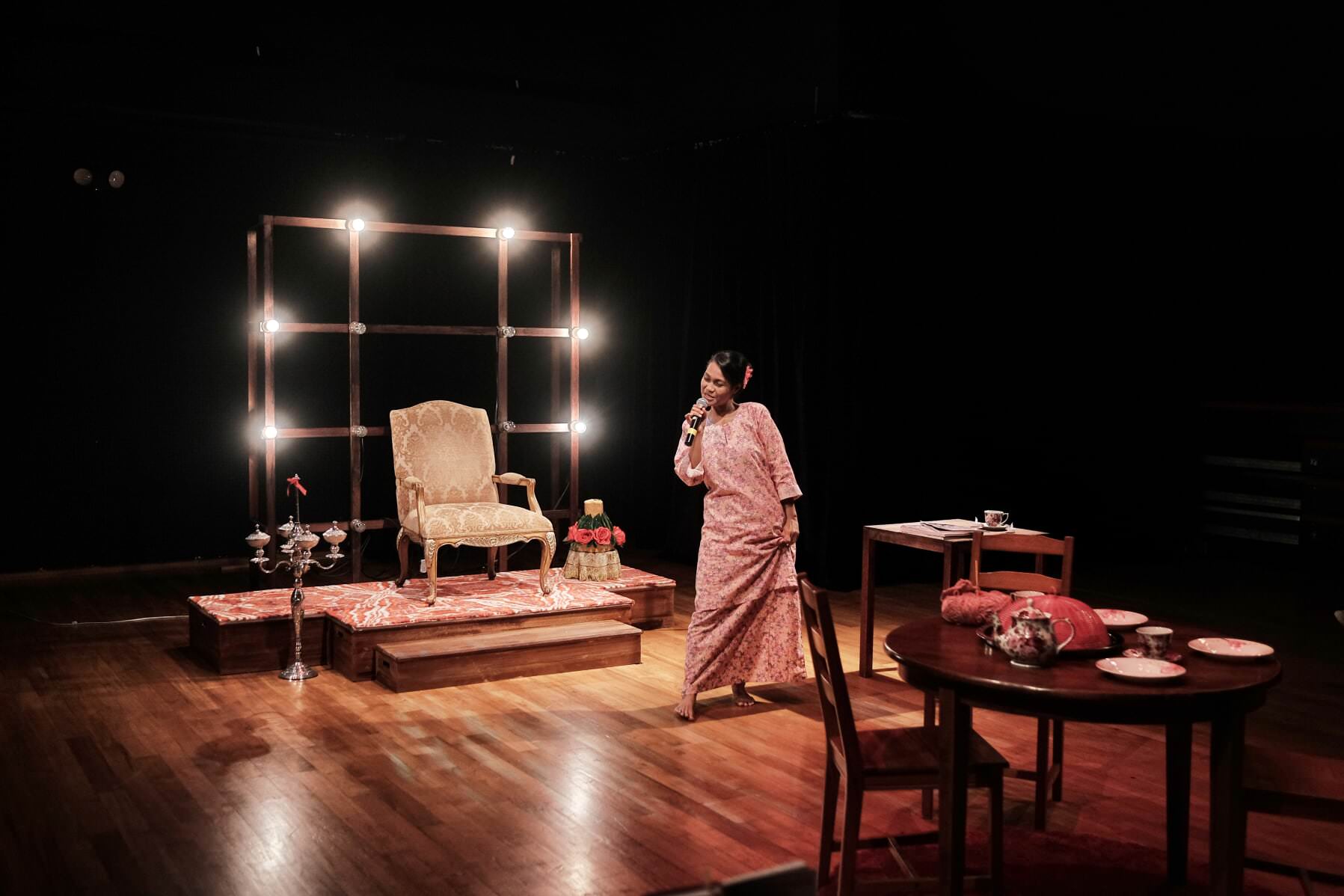 Madu Dua also isn’t afraid to eschew theatrical convention, going beyond a naturalistic form to have both Siti and Munah break character at one point to address the audience and speak as themselves, discussing their own thoughts on polygamy in society. In their speech, they offer a reminder that polygamy is very much still a reality in today’s day and age. Yet they choose not to judge, and instead choose to sympathise and attempt to understand that for some, this is their version of normal and imagining how they must feel to live like this every day. 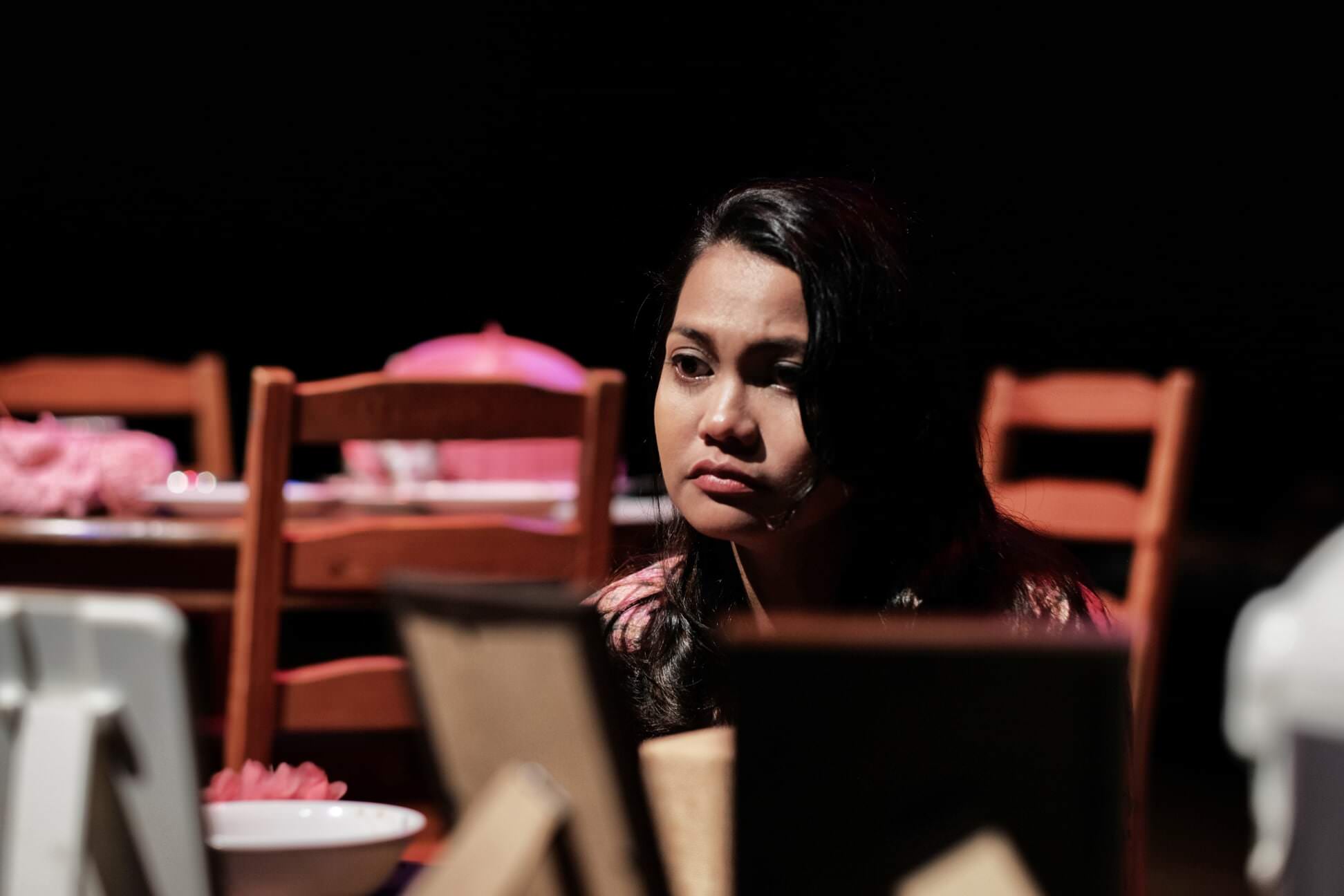 Beneath the fun and games, Madu Dua teases out an inherent, very real pain that exists across both women, striking at the emotional core when you least expect it. Kamariah is filled with jealousy and suffers from insecurity, having grown up with Hisham and her early marriage essentially robbing her of a life outside, her fears underscoring her daily life. Suhaila’s happy-go-lucky nature on the other hand, is essentially a front for a traumatic incident she goes through in her younger years, a recurring nightmare that haunts her every night. Both Siti and Munah are excellent at bringing out this darker aspect to their characters, and it is easy to be moved by their sincere portrayals and the eventual sisterhood they find in each other. One also appreciates the soundscape created by Tini Aliman in these instances – moving, rising affairs that pierce with their emotive notes to amplify the pain felt by both women. 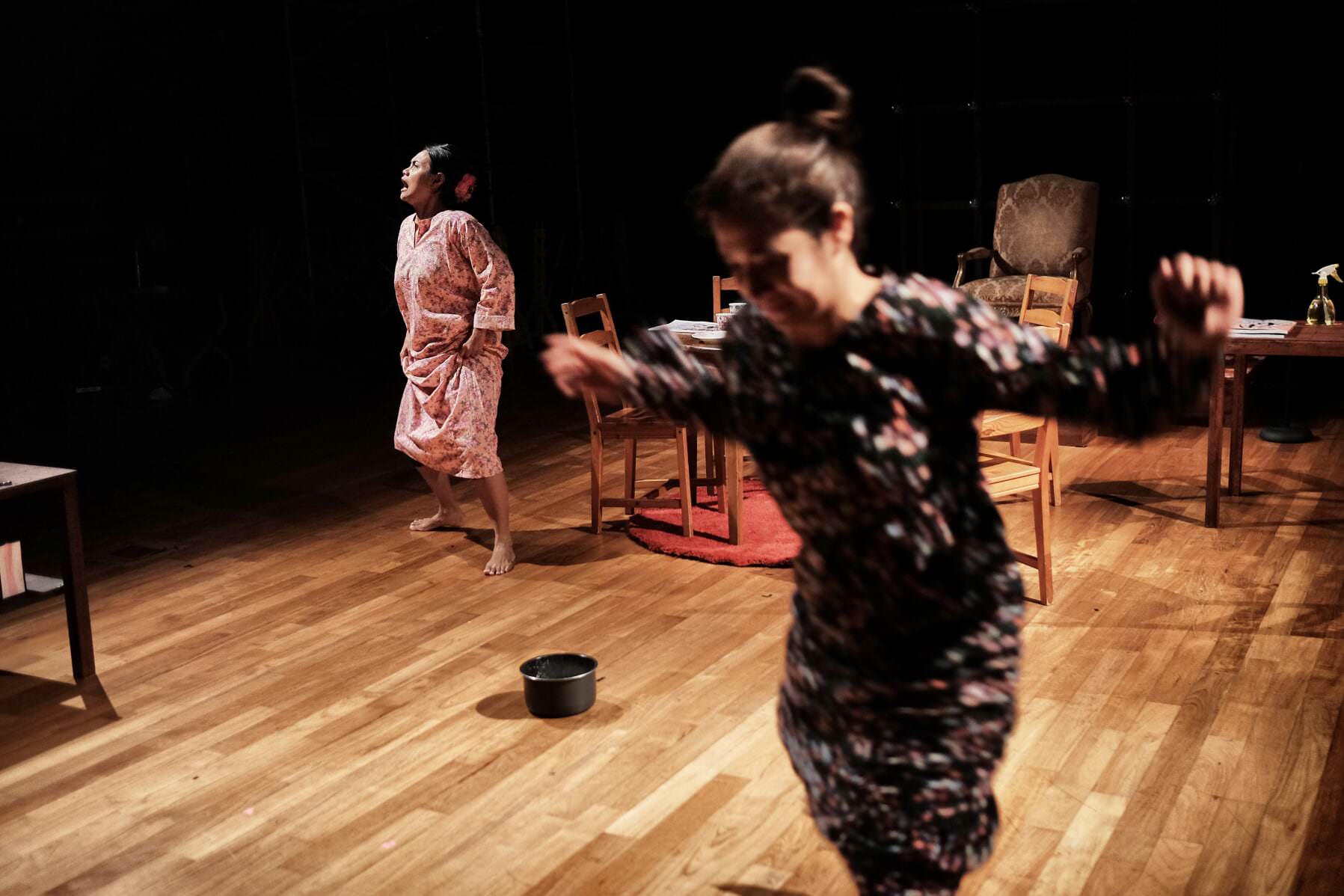 Powerfully performed and creatively executed, Madu Dua is a heartbreaking presentation of the female condition and the inescapable bondage these women have to a husband, with their every moment judged based on their relationship status, spirits rendered asunder by gossip mongers accusing them as failed wives or temptresses. At one point, as they anticipate the return of their husband, they attempt to cast a spell by jumping over a freshly steamed pot of rice and voicing their wishes for him to love them more – what initially is a humourous scene is once again corrupted by their competition against each other, and amidst the laughs, we are left embittered and upset by the lengths they would go to hold on to a man who it seems treat women as mere playthings he would likely toss aside eventually. 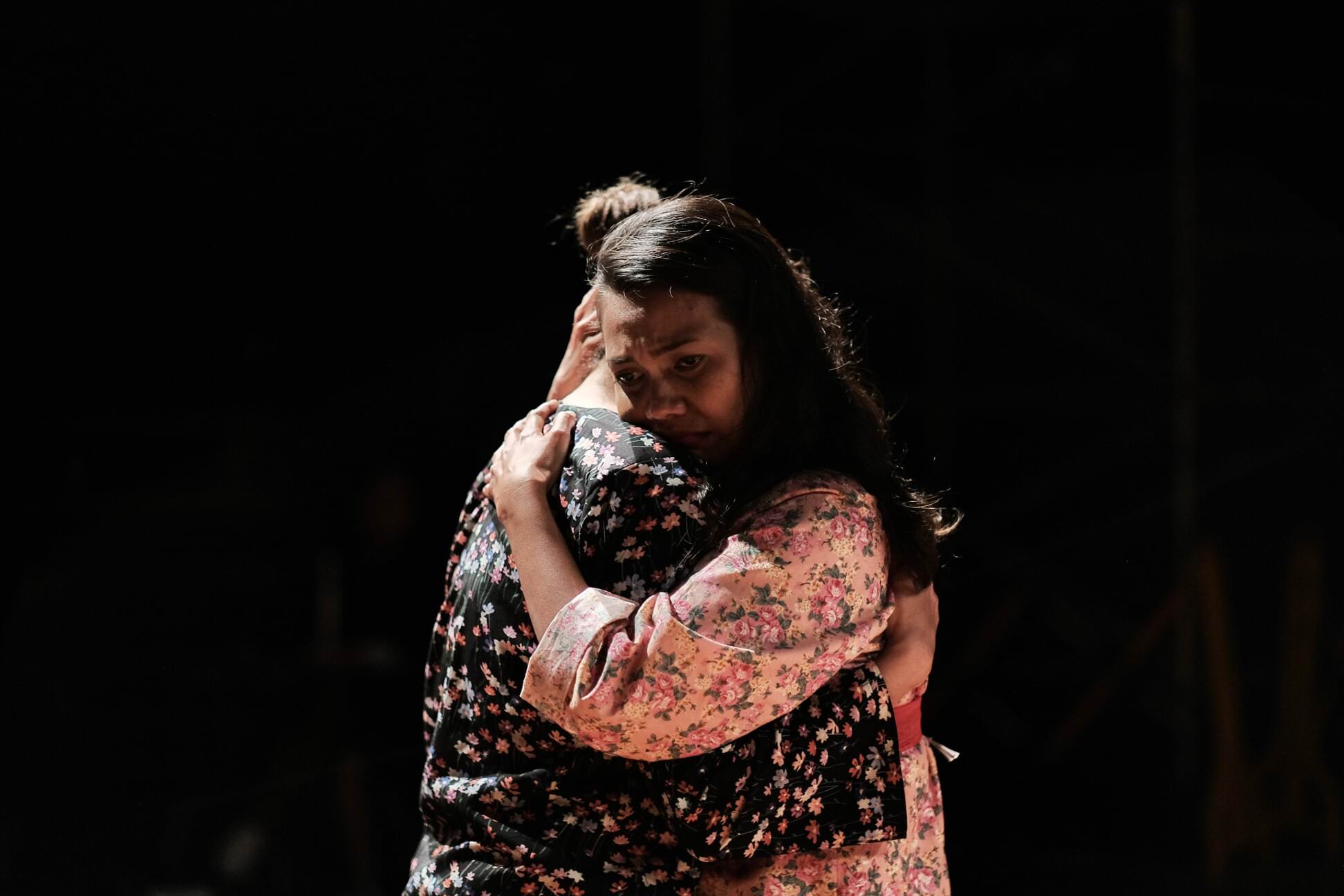 At the end of Bulan Madu, we have been presented with two scenarios where outdated ideals and traumatic pasts have only led to unhappiness and expiry in the present day. While both plays end on sombre, sober notes, there is the spark of hope expressed in the choice to progress past the kampong, and the embrace the wives share in a moment of solidarity. The past is past – and it is all we can do to let the honeymoon go, and bravely work towards an uncertain, better future.