Step right up and get ready for a truly wild ride – the Great Moscow Circus isn’t afraid to announce its entrance, and having set up a gigantic, brand new red and white tent in the very heart of the city to make its Singapore premiere, it’s impossible to miss this family-run circus if you pass by Marina Bay Sands. 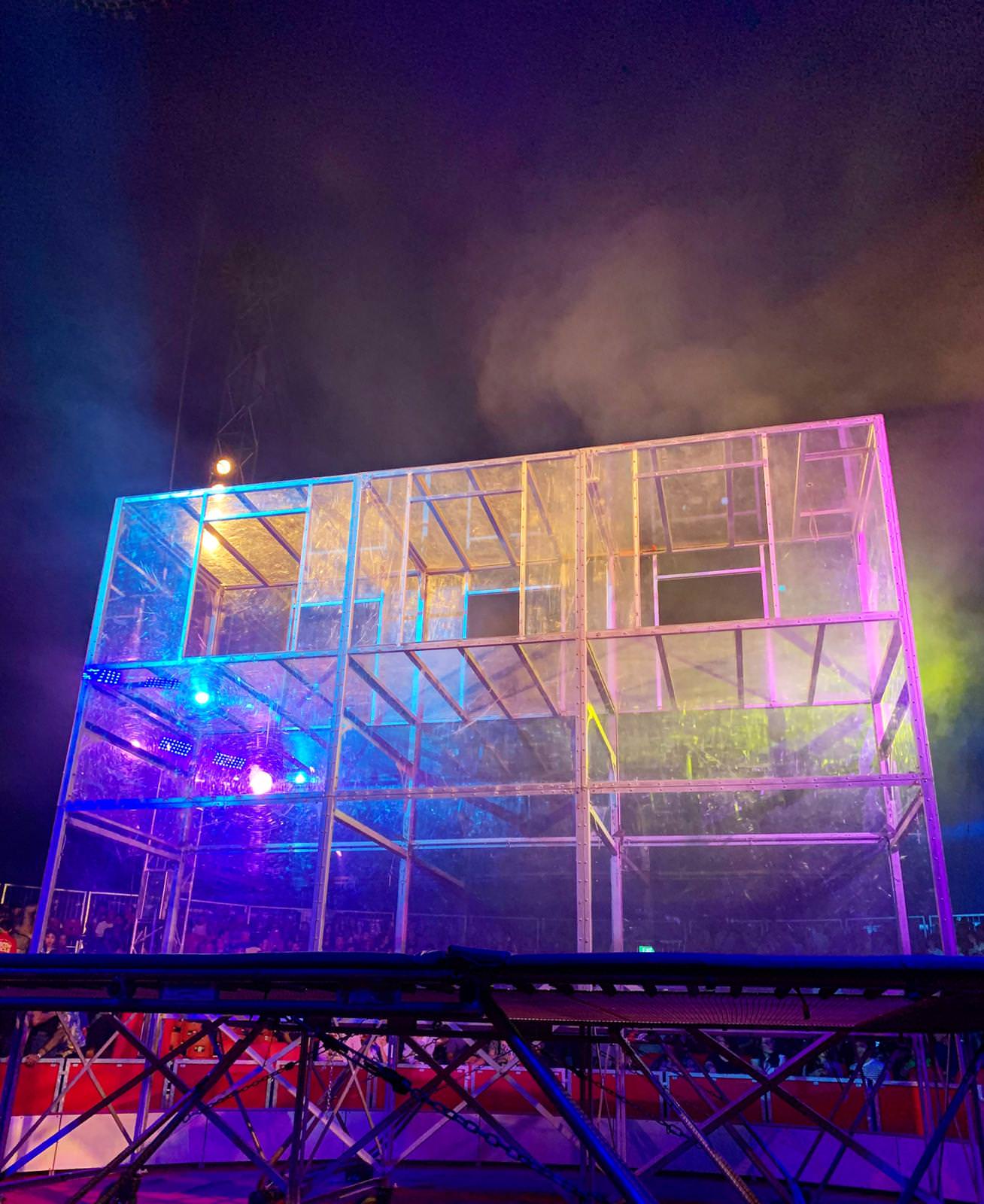 While The Great Moscow Circus does not possess the same level of high tech and cinematic as some bigger, brand name circuses, it more than makes up for it with its sheer enthusiasm, passion and energy it commits to making the circus experience a memorable one for all, living up entirely to the ‘great’ in its name. Equipped with their very own concession stand hawking snacks and souvenirs, the atmosphere was rife with energy and circus spirit from the get go. Perhaps one of the most fantastic things about the big top seating is how close every single audience member is to action, each act feeling intimate, personal and more intense due to the closeness.

As the show begins, the audience is given a warm welcome with a mass number introducing the entire cast of performers to the stage, a teaser to what we’ll be witnessing through the night before acrobats took to a Catwall Trampoline, bouncing up and down effortlessly as they scaled a transparent, cubic structure. Armed with wide smiles and clear joy with every bounce, twirl and somersault, the high energy opening number set the right tone and precedent for the rest of the performance to follow. 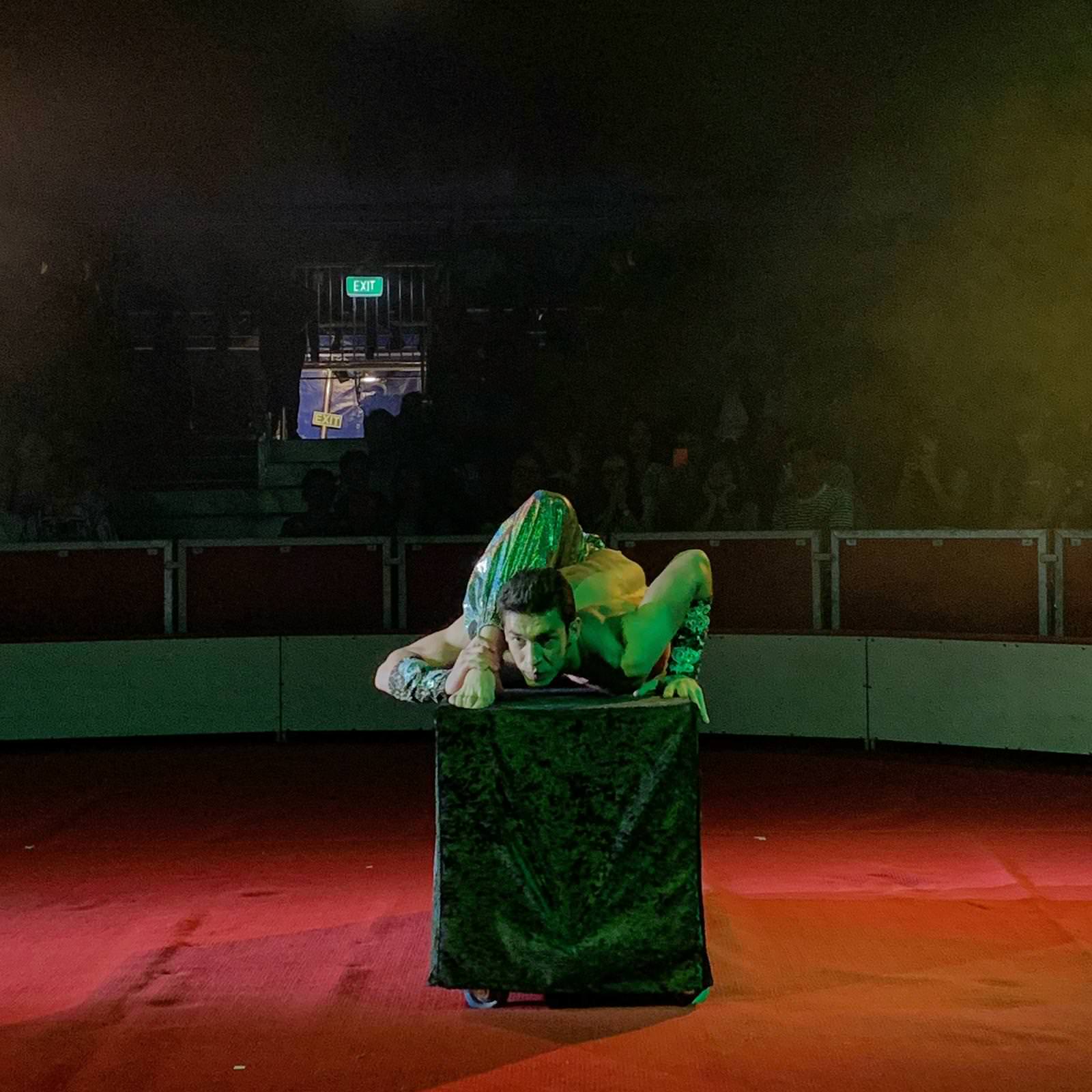 Audiences were delighted even by the non-stunt numbers, such as a Tajikistan ‘rubber man’ impressing with his feats of contortion, emerging from an impossible position enclosed in a box that looked far too small for an ordinary human to fit into, before effectively using both gross out humour and sheer flexibility to leave the audience wowed. The various clown acts left us tickled, as exaggerated comedy and magic tricks were playfully but expertly executed with precise comic timing, while rope jumpers came out cheekily dressed in tartan kilts and performed increasingly complicated choreographies while nimbly navigating the giant skipping ropes. 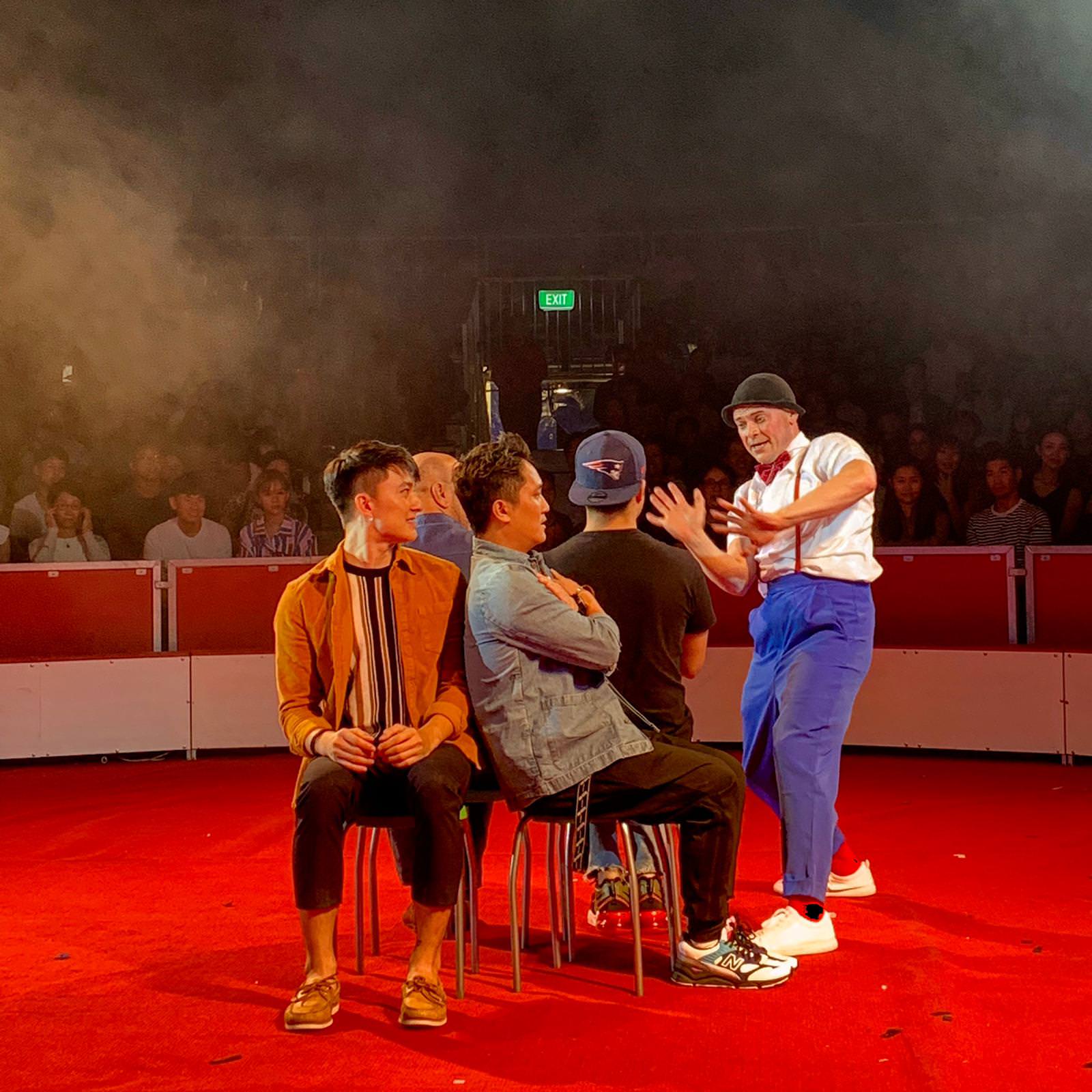 Other highlights included Sixto and Lucia, contestants on America’s Got Talent showcasing an elaborate quick change act allowing no room for error, with both performers revealing a seemingly endless wardrobe through almost no set, save for a few choice changing curtains and a bag of confetti – that they pulled this off without a single hitch is some real magic. 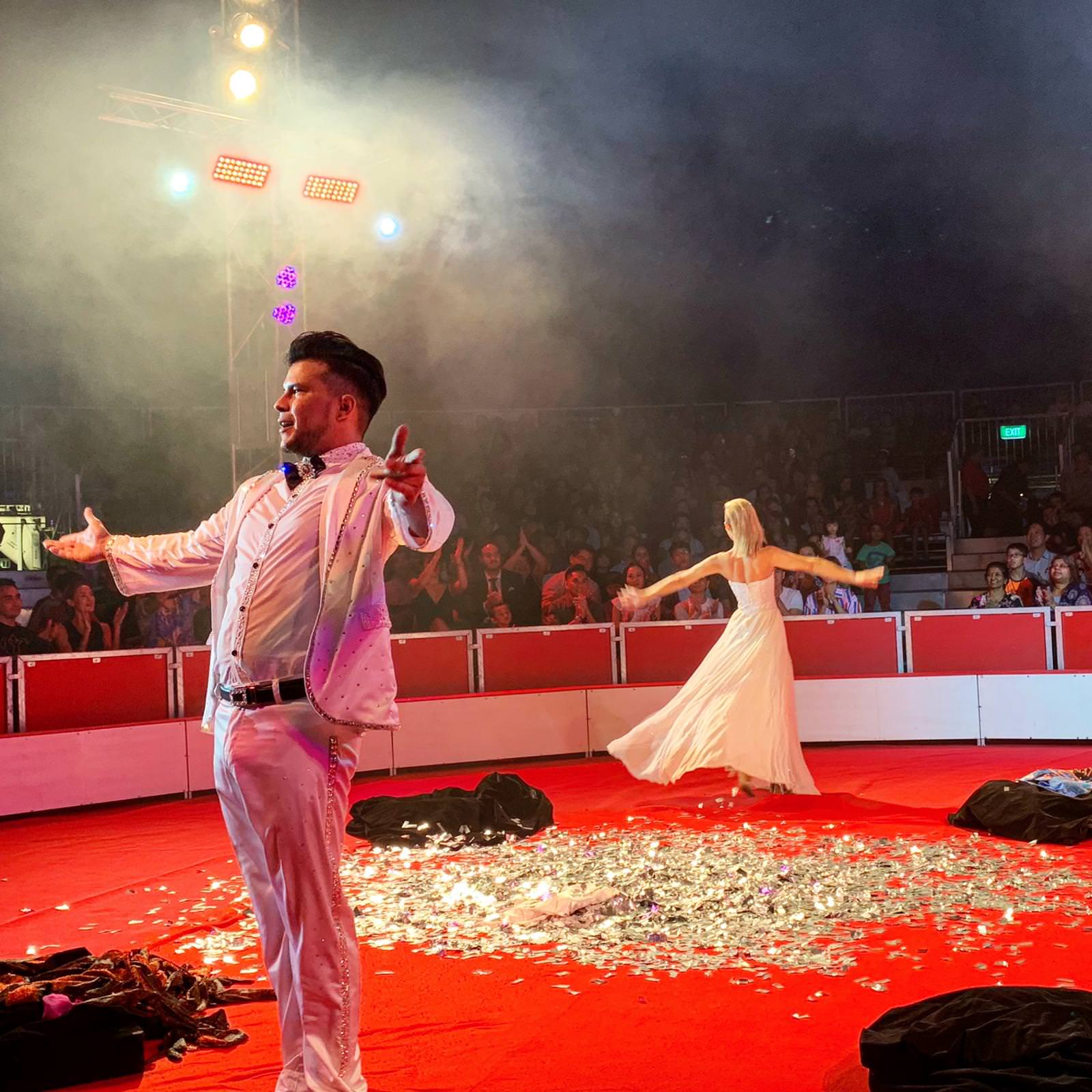 Perhaps what is truly impressive about the Great Moscow Circus though, is how much attention is paid to the setup of each and every piece of equipment that comes onstage, with the performers themselves tasked to check safety and ensure the equipment is properly secured before their act begins, as the smallest lapse could be deadly. 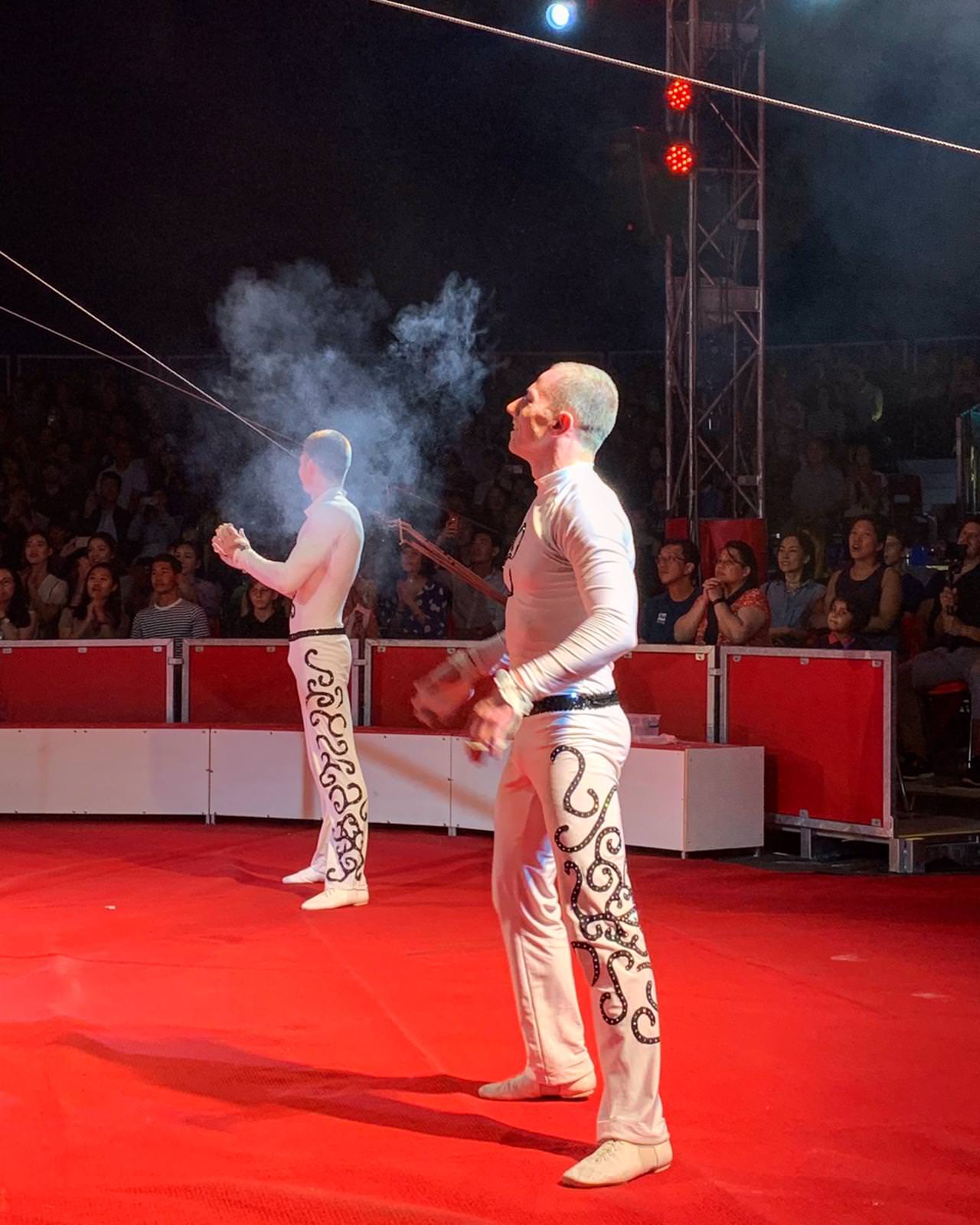 These acts ranged from acrobats swinging powerfully from the horizontal bars to the magnificent Act 1 finisher – a dual wheel of death set up as performers jumped, leapt and spun to Robert Miles’ iconic track Children, with no safety net to catch them if they should fall. Immense concentration and sense of timing is displayed here and is absolutely necessary to ensure it all runs well. 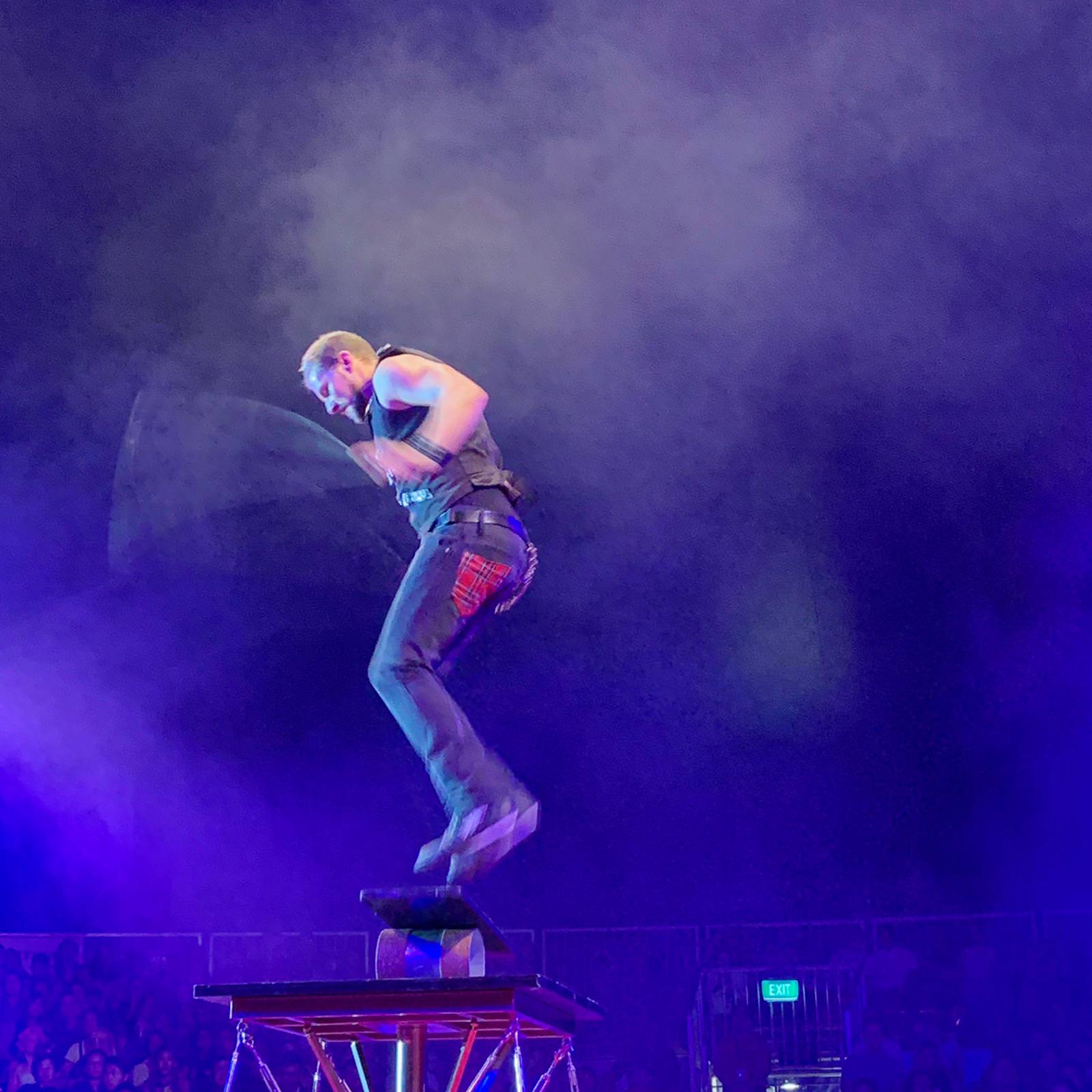 Not to be outdone, following a brief intermission, the second act opened with members of the circus family performing an impressive juggling and balancing act upon an increasingly unstable platform, before Russian aerial silk dancers delivering a skilful, elegant number brimming with emotion, each and every stunt was a sight to behold. 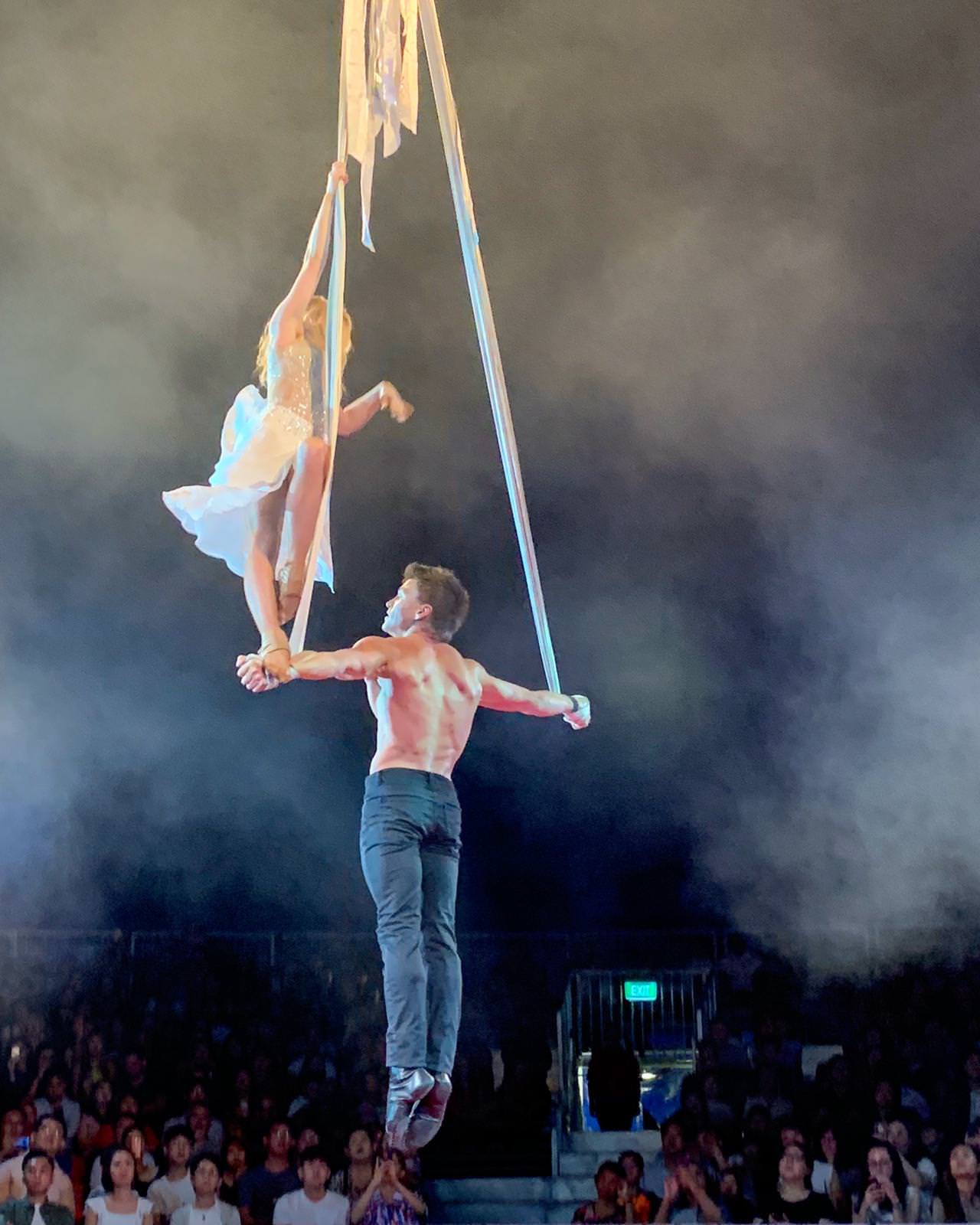 Meanwhile, a Mexican juggler goes above and beyond the usual act with some ping pong ball action, catching and juggling them with both hands and his mouth and illuminated by UV light for dramatic effect. Said juggler also throws sombrero hats like a boomerang, circling the entire tent as he throws these hats and catching every one without fail, constantly charming with his sheer showmanship. 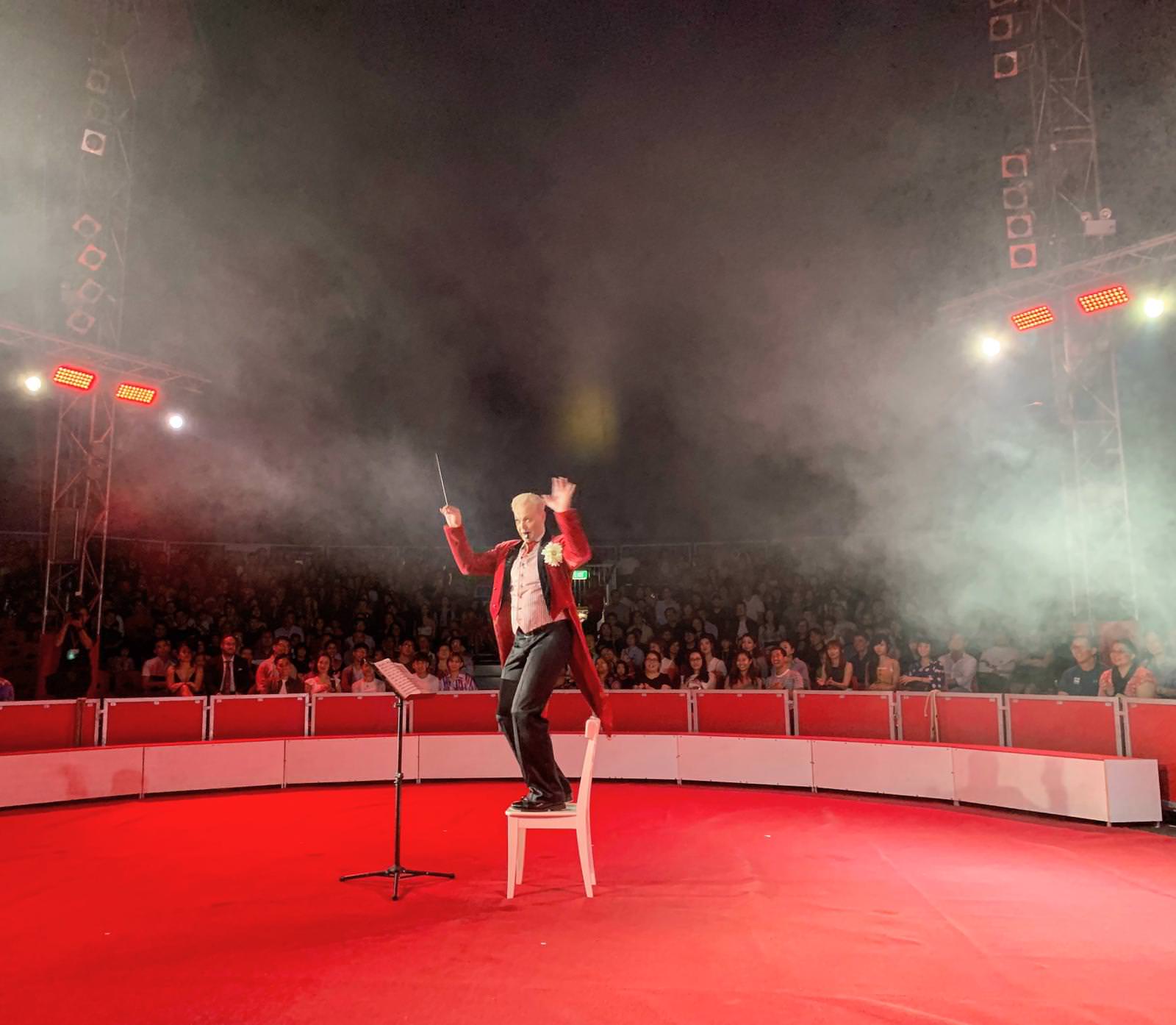 Kudos must be given to our Russian ringmaster, whose charismatic orchestration is what keeps the show together the entire time, and his emceeing keeping us on our toes and entertained between acts and even while waiting for equipment to be set up and safety tested, ensuring that there is never a dull moment. 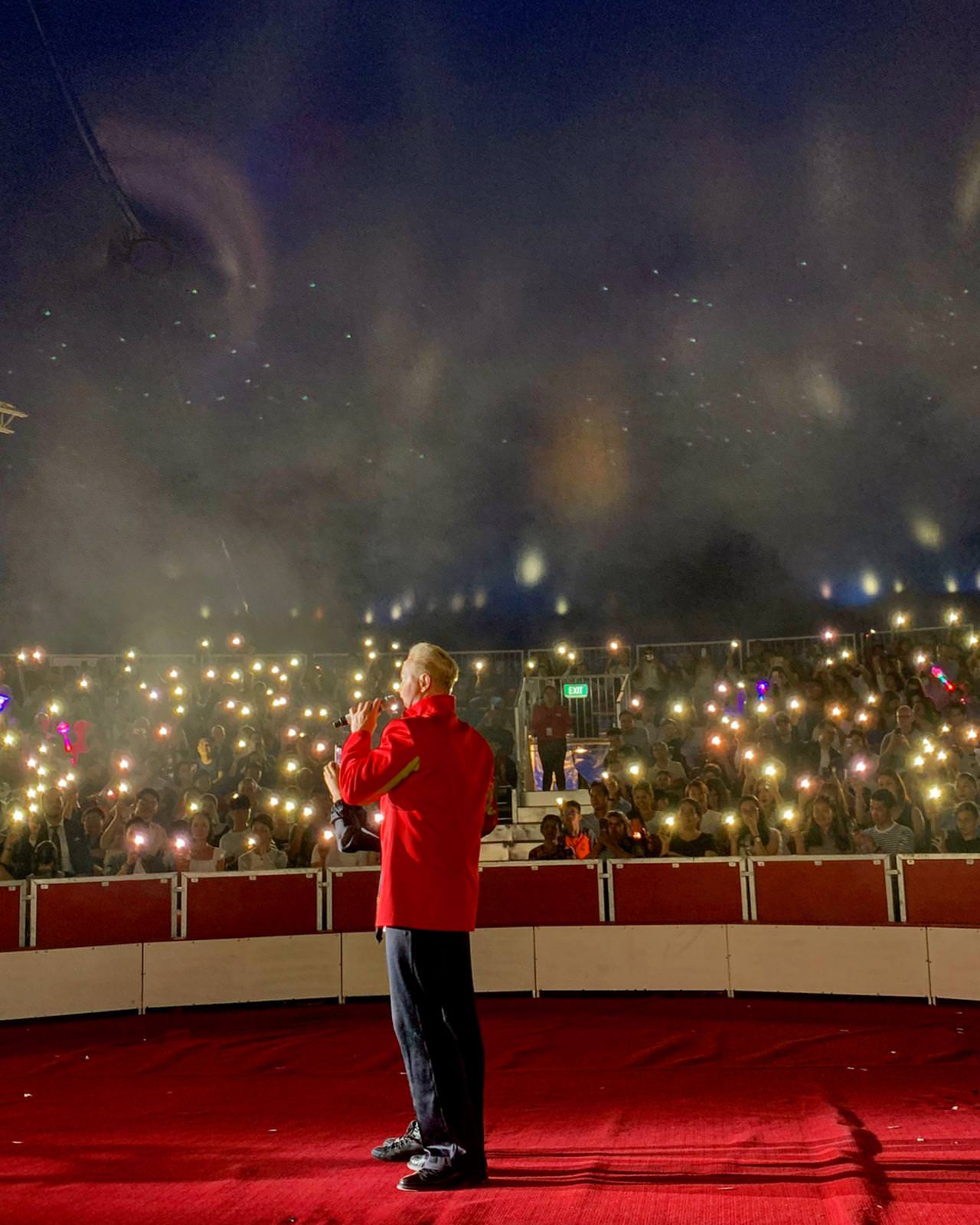 Look out for a scene where even the audiences get to be ‘stars’ for a day, a touching scene that will make you believe in the magic of the circus again and fill you with pure magic. 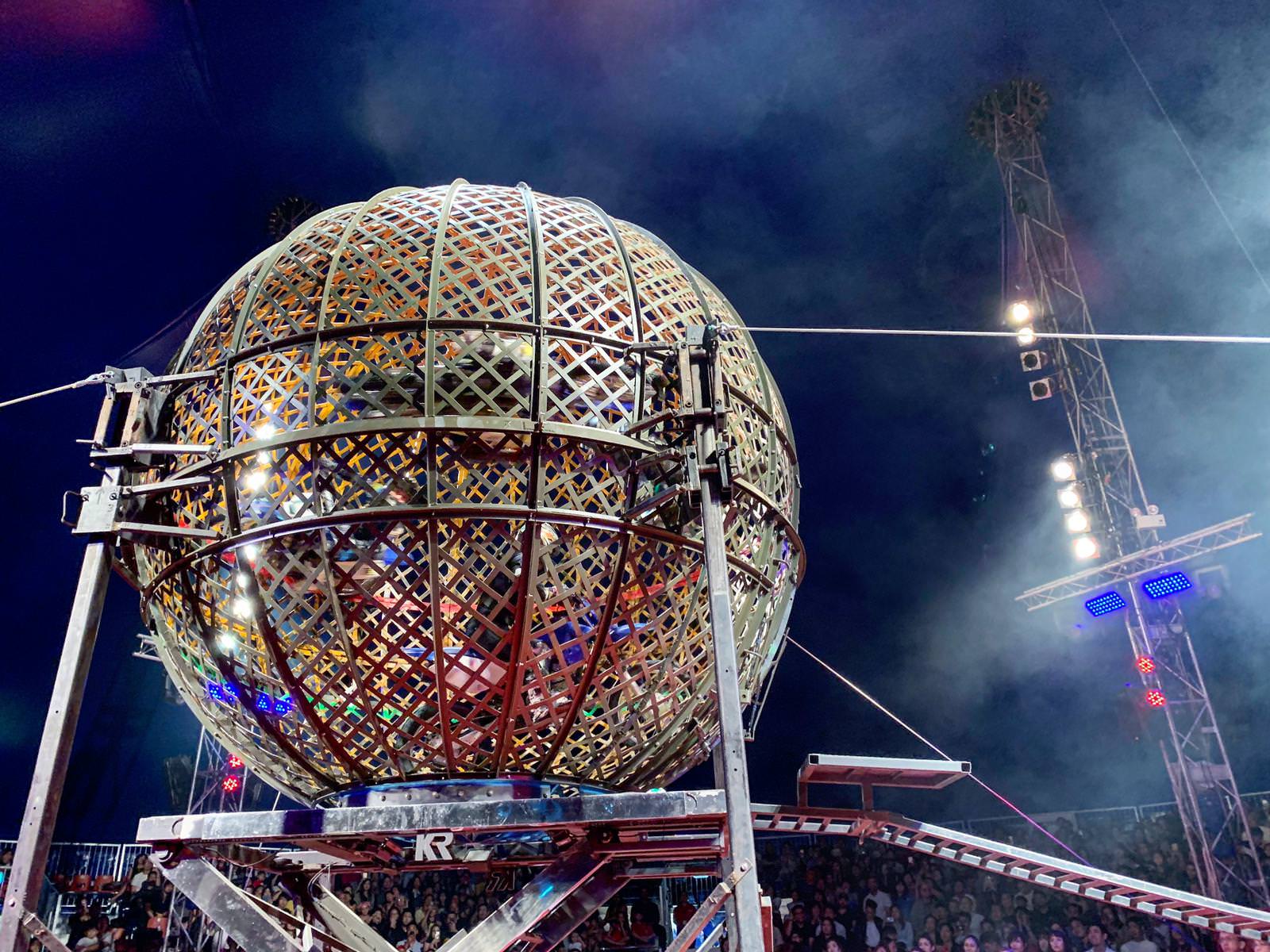 For the grand finale of the night, we were introduced to an appropriately death defying act with the a Globe of Death, as skilled motorcyclists navigated the tight space within the caged ball and ran rounds around each other, maintaining their balance with each revolution and in perfect sync with each other, leaving audiences gasping with each additional motorcyclist added.

It’s honestly a rare sight to see such traditional circuses still in existence. But not only is the Great Moscow surviving – it’s practically thriving as it kicks off its first of six weeks with a bang. If you’ve never been to a circus before, or want to experience all the finest acts one after another, then you’re in for a treat at the Great Moscow Circus. A spectacle for families and friends, there is only the promise of a good night out as it delivers on all the heart-stopping thrills, charms and wonder one has come to expect from a stellar circus troupe. 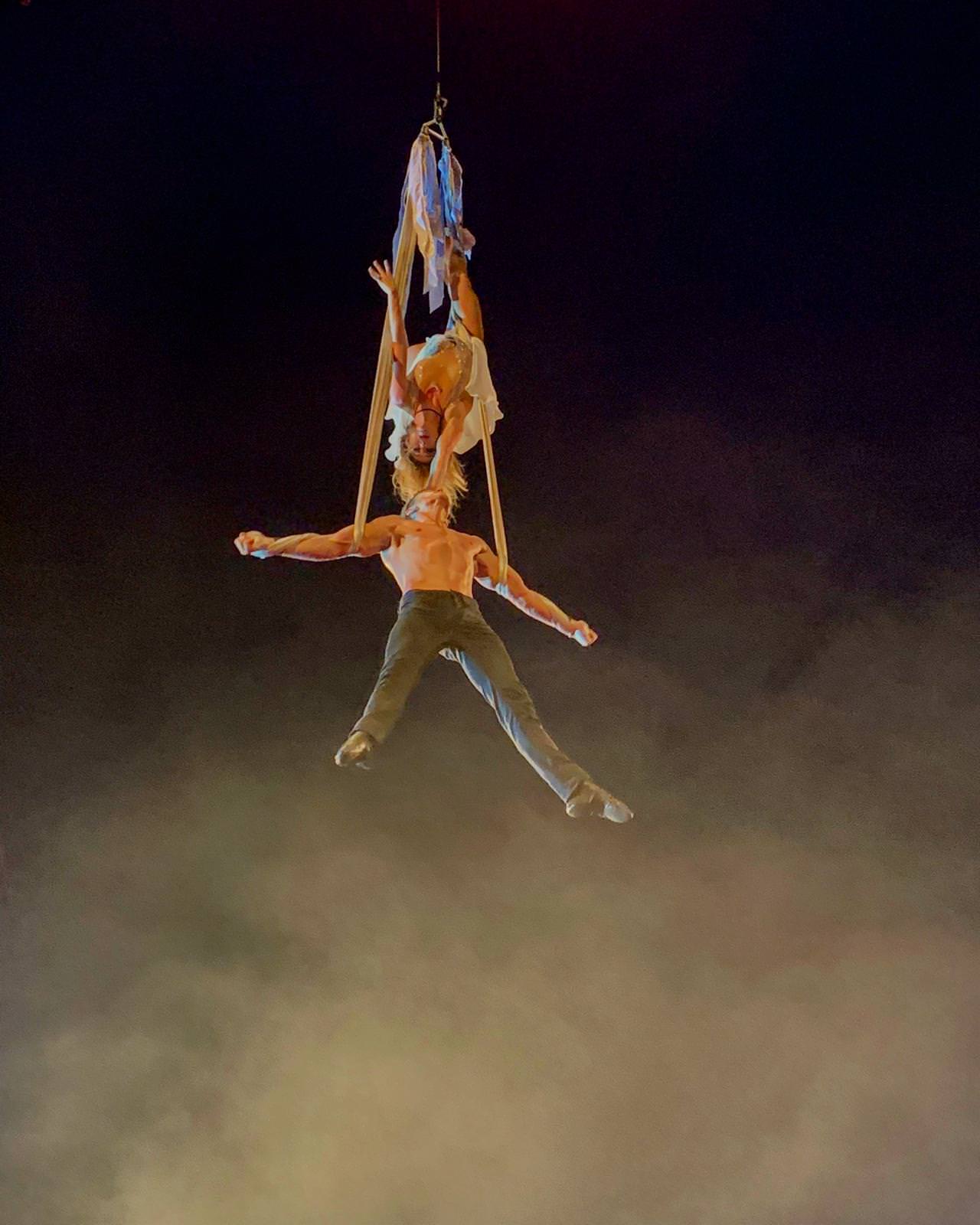 We’re giving away tickets to catch the Great Moscow Circus for EVERY WEEK!All you have to do is: