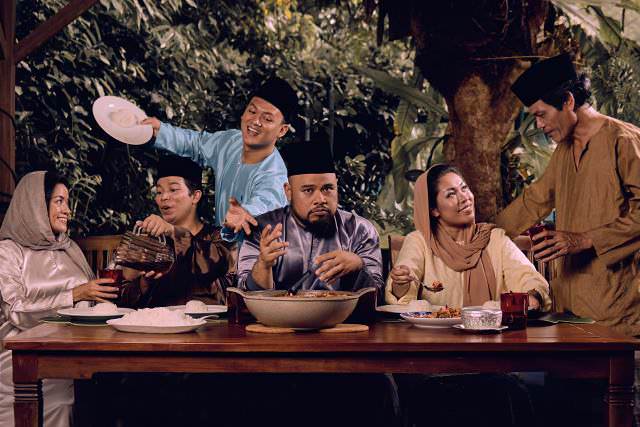 The inheritance of violence and despair is on show in a powerful, unusual love story from one of Singapore’s most exciting theatre makers.

If one has never known love, how does one then display it? That is the issue at the core of Noor Effendy Ibrahim’s 1995 play Cerita Cinta, where contrary to its innocent title (literally ‘Love Story’), love manifests itself in perverse, violent ways that leaves every member of its central family in a constant state of fear. 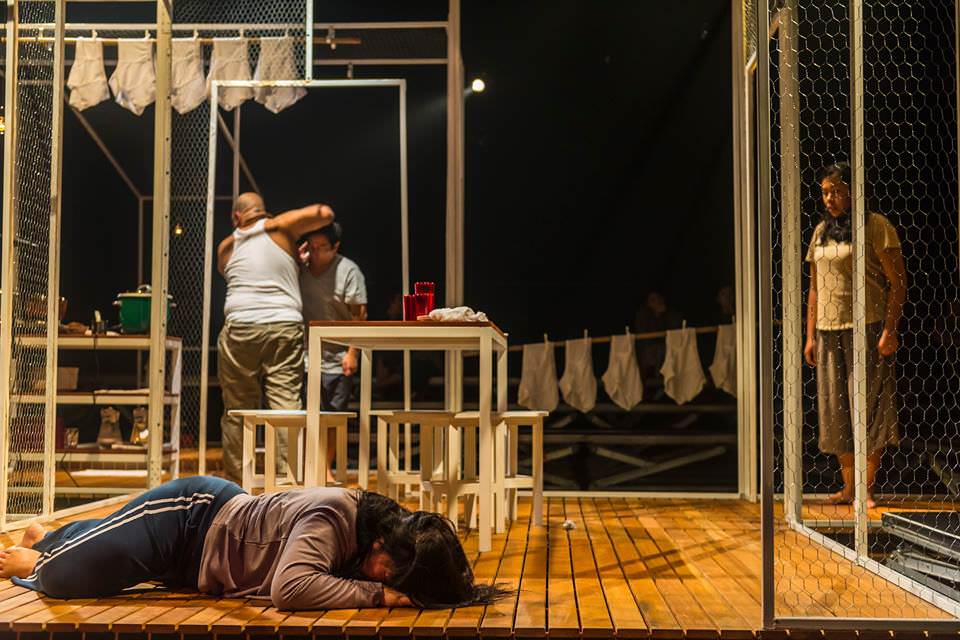 Leading this family is patriarch Roslan (Saiful Amri), our flawed ‘protagonist’ constantly watching every movement that goes on in the house. His wife Maslina (Dalifah Shahril) is either in the kitchen cooking or calming her nerves smoking a cigarette. It is especially terrifying when Roslan beats her, grabbing her by the hair and shouting, and coupled with the visceral smell of assam pedas filling us, it’s almost evil how Noor Effendy has now associated it with the sight and sounds of violence (the olfactory is one of the strongest memory triggers after all).

Maslina becomes a ghost in her own home, a spectre whose spirit is so battered, she chooses to reject her entire family, preferring to scrub the unwashable blood off the floor rather than join the family for dinner, her hope completely eviscerated as she cooks only leftovers every day, the same old love now on the verge of complete expiration. All she can do is scream ‘BABI!’ (pig) when out of earshot in the last vestiges of her strength, her own cries a reminder that she is still alive. 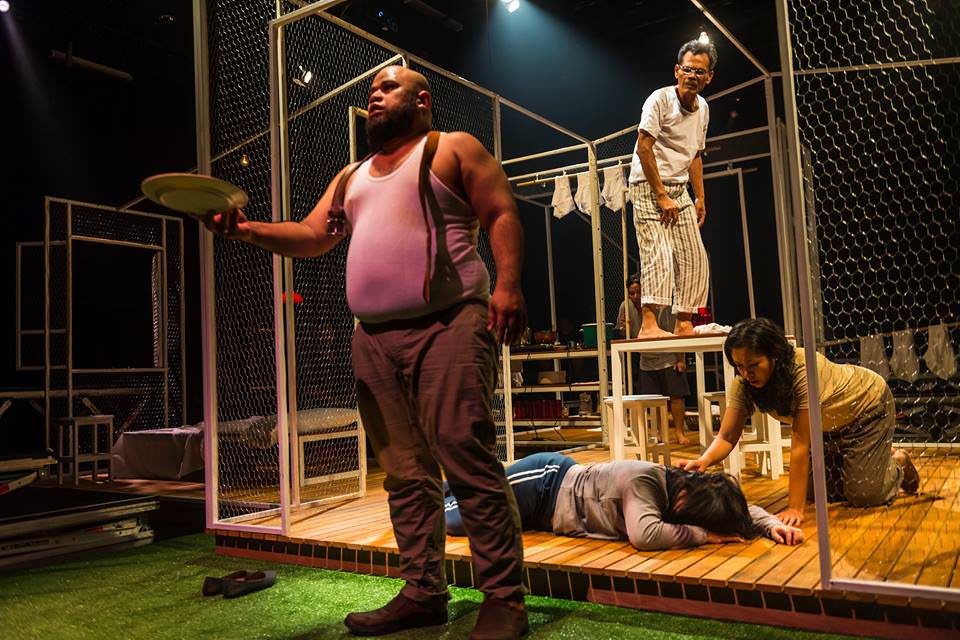 As for the children, even before the play begins, we already see Juliana (Shafiqhah Efandi) and Zaki (Al Hafiz Hanusi) shifting between playfighting and caught in a chokeholds, an indicator of the warped familial relationships each and every member has with each other. During the play itself, it is suggested that Juliana is sexually abused, or at least, perversely watched by her father, while the familial violence she experiences transcends to her own love life, escalating an argument with her boyfriend Rizal (Kaykay Nizam) into physically assaulting him.

Zaki, on the other hand, is perhaps the most pitiable character of all. Essentially helpless as he is bathed by his sister, shivering in the cold dressed only in his underwear, he is at the mercy of both his father and mother, and has no power, no voice to stand his ground, the only other character apart from Maslina who is completely rooted to the house, unable to leave. 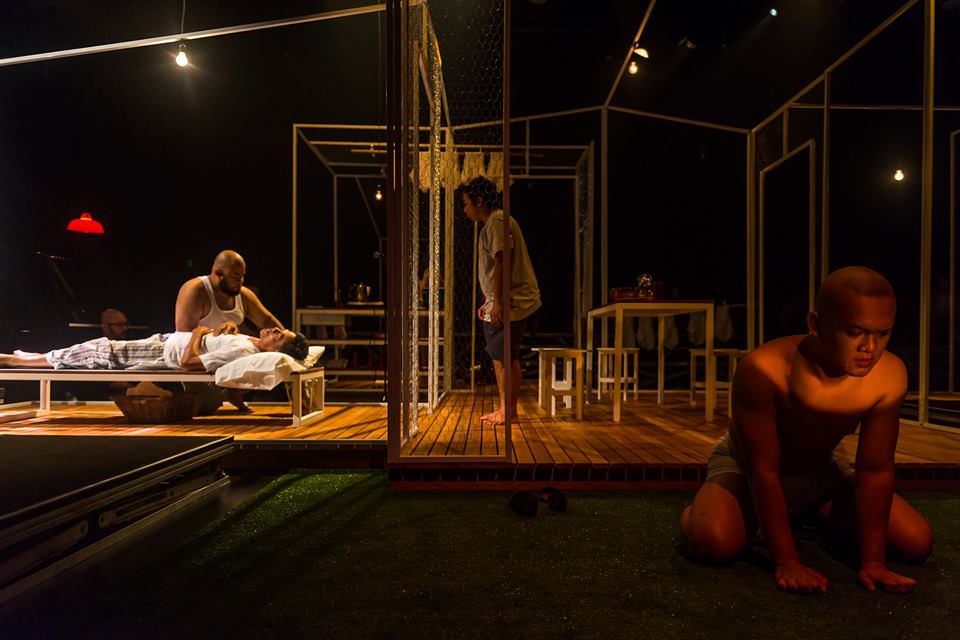 But while this family’s dynamics are completely contrary to our idea of a typical, ‘normal’ one, the cast share such a strong chemistry that this warped love they share somehow translates to an incredibly powerful, undeniable connection this culture of violence has forced into their very souls. Roslan, as unlikable and frightening a character as he is, may just be the most misunderstood of them all – the ghost of his father (Joe Jasmi) literally haunts his thoughts, invisible to the rest of the family while Roslan continues to mourn him, never quite getting over his death, the only person Roslan will show tenderness and respect towards.

Besides his late father, Roslan also finds a strange kinship in the family pet (also Kaykay Nizam), perhaps indicative of how violence is a trait reserved almost solely for humans, something we inflict on each other and experience not just physically, but emotionally. Roslan is a man who is caught between expectation and order, often left confused how to act and relying completely on his own rash decisions and primal emotions to determine his behaviour while repressing his deepest, most volatile emotions, perhaps with the view that this is how ‘real men’ should be. Perfectly capturing the man in all his terrible rage and crushing vulnerability, Saiful Amri deserves ovation for portraying Roslan in all these complicated facets. 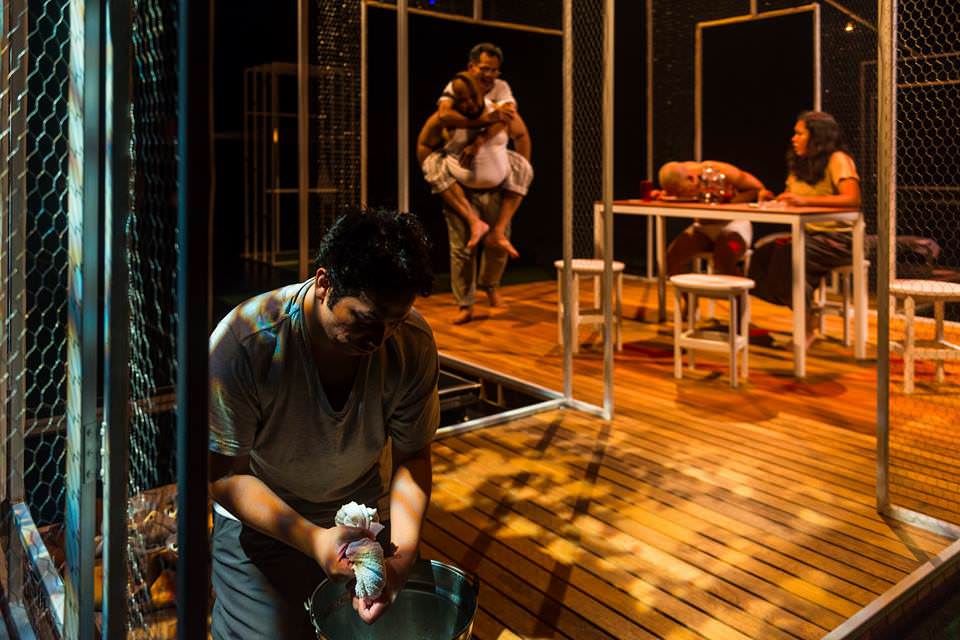 The world of Cerita Cinta feels like an eternal nightmare, a form of hellish purgatory the family finds themselves in as they live out each day on tenterhooks within the confines of their house. Audiences are seated on nearly the same level as the house, intricately crafted from thin chickenwire and white, skeletal wood, and this makes us feel that much closer to the action onstage, feeling every shout, strike and movement reverberate through our bodies. The same white underwear worn by all male cast members hangs on bamboo poles out to dry, the pervasiveness of masculinity in all its most intimate forms felt in every corner of the set.

The house is not merely a ‘set’ – it is a living, breathing being that is as much a character as the cast onstage, with a working tap whose flowing water we see and hear, hot and sour assam pedas and white rice cooking on the stove, and a backyard lined with astroturf, a stray kite floating in the night. The house is a space that is so essential to their lives with the routines, the familiar spaces they cannot abandon, and a place they return to at the end of each night, that within its four walls, it is essentially ‘trapping’ the family within. Sound artist anGie Seah and Noor Effendy himself on the piano only add to the melancholy, as they perform wordless, sob-inducing wails in between scenes, the pain seemingly endless as night falls, dawn breaks, and the vicious cycle repeats itself once more. 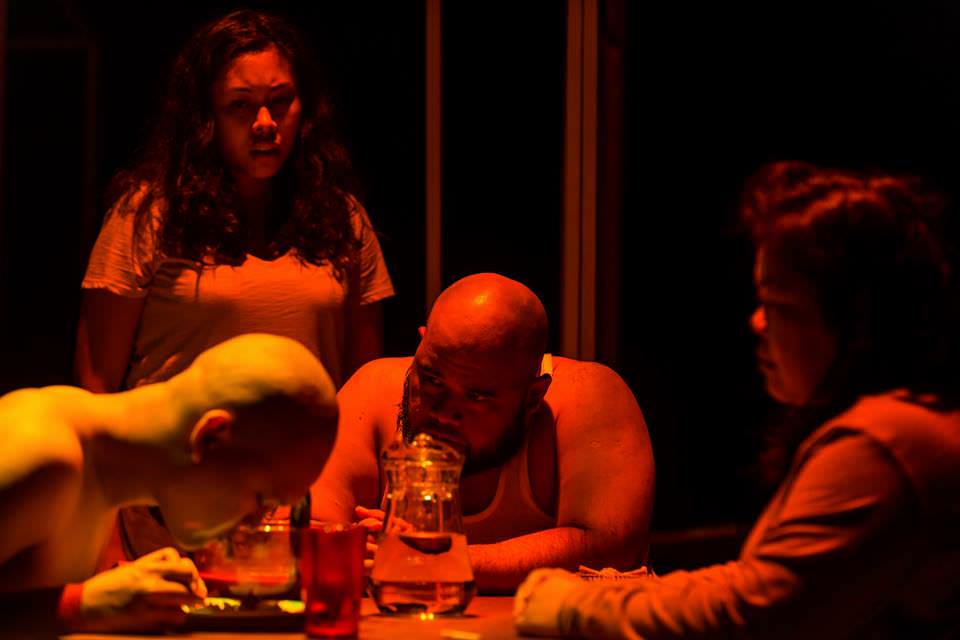 Yet, even at its most violent and hopeless, the characters of Cerita Cinta somehow find unexpected strength and comfort in each other, and cements this play’s position as an extreme representation of family togetherness. Roslan’s family, like all families in fact, is bound by a bloody love that transcends all logic and meaning at times to imprison them in this utterly absurd relationship for all time, for better or for worse, in life and in death. It is incredible then that these paradoxes, so utterly grim and unimaginable, are made horrifyingly understandable under Noor Effendy’s deft hand – he stares into the abyssal aspects of human nature, and transforms that darkness into harrowing, affecting theatre, touching a private part of our souls that leaves us shivering with fear.