One of the most pertinent events to have surrounded the issue of race is perhaps none other than Rachel Dolezal, the Caucasian woman who lived a life pretending to be black, drawing flak for the lie, yet was an outspoken vocalist for civil rights. It’s an issue that shows that as much as we’d like to say that all races are equal, the truth is far more sinister than that. And as much as our own country would like us to believe that we are all the same underneath, race unfortunately, does play a key part of each person’s identity, community and ultimately, shapes their entire life.

Such is the basis for playwright Myle Yan Tay’s latest work, which boldly and unabashedly tackles some of the most controversial and hot button topics surrounding race today. Master Race paints a picture of a not-so impossible future, where a form of plastic surgery has been invented to completely graft new skin onto patients, effectively allowing them to change their race.

During the play itself, we follow three parallel storylines, two of which feature citizens considering undergoing the treatment. In the first, Ray (Roshan Singh) and Wang (Andrew Kwan) wait at the hospital as Wang’s half-Malay half-Chinese girlfriend Eliza (Evannia C. Handoyo) makes a decision. In the second, lawyer Rita (Irdina Suleiman) and John (Kristian-Marc Paul) are a couple who fight over Rita’s rash decision to undergo the graft. Over the course of these two storylines, we see these citizens argue over familiar issues ranging from casual racism to discrimination in the workplace.

All of this comes to a head with the strongest of the three storylines, which follows Patricia (Jo-Ann Heng), an employee of the company that founded the procedure, as she appears on a live talk show hosted by Joanna (Anthea Julia Chua). Patricia always appears like a deer in headlights, taken aback by the increasing viciousness with which Joanna harrows her and the difficult questions tossed at her from audience and internet, and it is with simultaneous disgust and excitement that we watch this television drama unfold, the stakes growing higher with each segment. Anthea and Jo-Ann share a good onstage tension, making their cat and mouse game believable and the audience on edge, and essentially, is the driving force of the entire play we cannot help but latch on to as we gleefully watch Patricia cornered. It’s an oddly familiar scene of schadenfraude as we’re ourselves reminded of the way keyboard warriors stop at nothing to tear public figures apart.

While possessing an incredibly strong premise, Master Race still feels very much like a work in progress, with uneven pacing and a need for a stronger central narrative. While the talk show segment was without a doubt the most engaging, all three storylines featured characters who struck a chord only because of their issues, but not so much because of their characterisation, leaving us strangely hollow at the anger from its characters. In Rita and John’s segment for example, there comes a point where she accuses him of being ‘white inside’, an argument that seems to be building up to a point but ends up sounding like hysterics by the end of it due to its weak foundations. Master Race then, requires characters to be fleshed out more, with lines that are more intricately woven into the play as shown but not explicitly dictated in order to bring out the emotional thrust of each character and issue.

Ultimately then, Master Race is an ambitious play that ends up unfocused and diluted across all three storylines in an attempt to bite off more issues and characters than it can chew. There is great potential in this bold and brash play, unafraid to tackle controversy head on, as evidenced by its bookend scenes of an unabashed comedian (Ryan Dennis Lim, who delivers punchlines with pitch perfect precision). Given more refinement and resources, one can only hope that it manages to find a future version where it ends up delivering on the big promises it sets up with its juicy premise, ripe for tearing into and dramatizing for the stage. 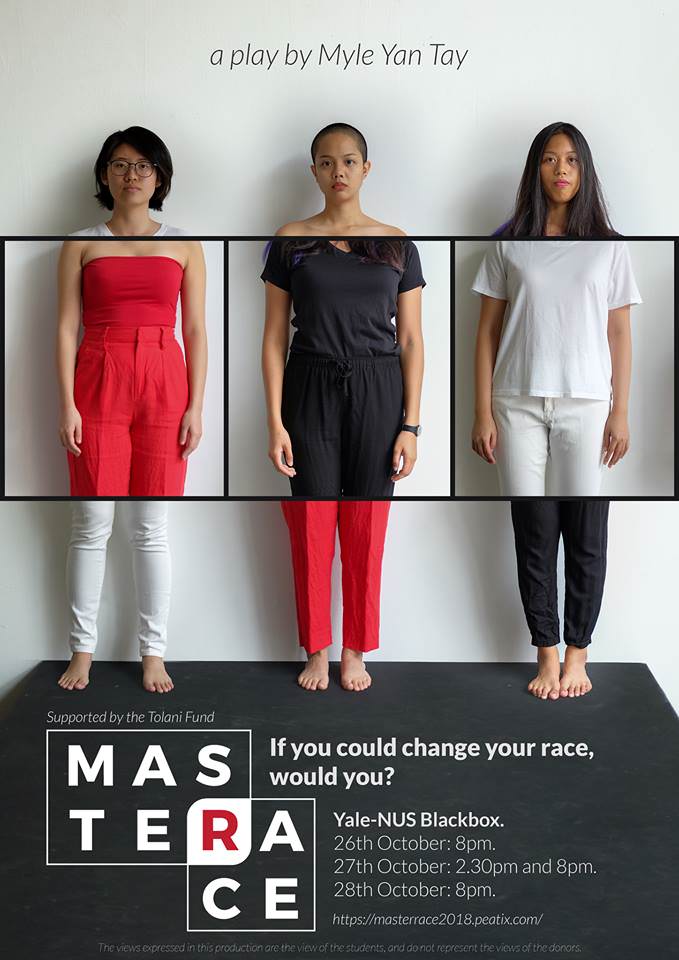