Intelligent toys, a mouse king and sexy candy make this version of The Nutcracker a fun Christmas romp.

From the outside, one would never that there was an entire world of wonders hidden away at Andsoforth’s space on the top floor of a nondescript building. But as Andsoforth has proven time and time again, magic can happen if you just believe (and have the skills to put it all together), and even if you’ve attended previous editions of their immersive dinner-theatre, be prepared for a whole new level of design when you attend Marie and the Nutcracker even the most skilled architects would be proud of.

Inspired by the original short story of The Nutcracker by Alexandre Dumas, Marie and the Nutcracker sets up the Christmas mood right from the get go as audiences step into the lavish mansion of Judge Silberhaus, father to the eponymous Marie who has just returned from her studies in London for Christmas. Designed by Sebastian Chun of Superbear Design, the mansion exudes richness from first sight, with multiple maidservants thronging the mansion with food carts in hand, plastered with a three-dimensional wallpaper with golden chalices and fleur de lis emblems, countless portraits of complete strangers and even a roaring ‘fireplace’ we can imagine huddling up to in the middle of winter. Set in Nuremberg, Germany, it’s also only appropriate that the bar in the mansion serves up Erdinger, along with other (strong) festive cocktails to get audiences tipsy enough and in the proper mood for a bit of Yuletide fun. 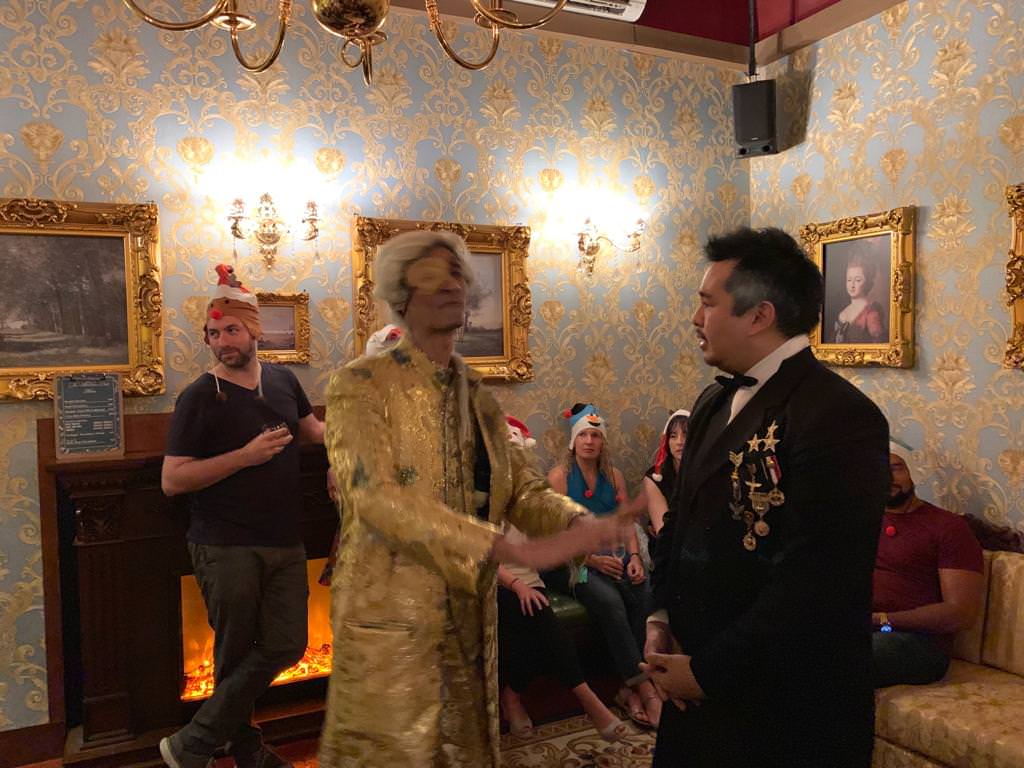 Receiving a warm welcome by Judge Silberhaus himself (a very charming Jon Cancio), we’re also introduced to the Marie (played by a different person with every performance) and her mad scientist of a godfather – ‘machinator’ Drosselmayer (Iski Senna, dressed in a poofy wig and golden eyepatch), who presents Marie with a toy nutcracker and toasts to Christmas with a hearty round of homemade mulled wine for everyone. While the party starts innocently enough, with a set of simple party games and inconsequential mingling, it’s not long before the adventure kickstarts proper, and Drosselmayer unveils an incredibly delightful secret entrance to a hidden world straight out of a fantasy. 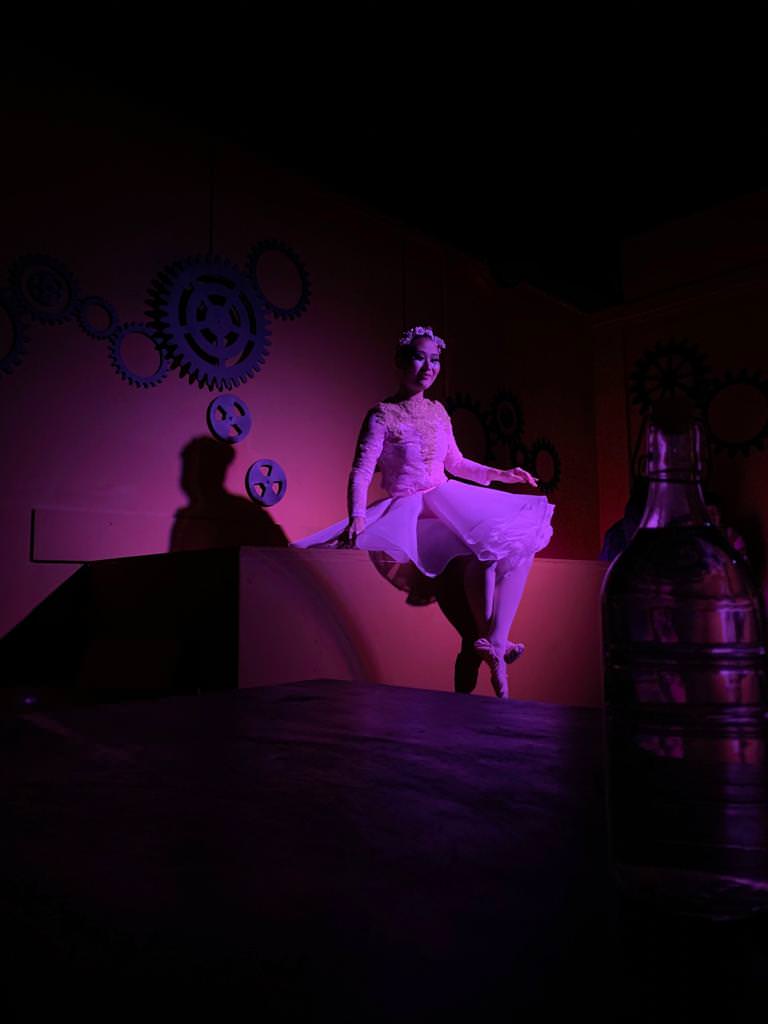 To get to the next room, we find ourselves diving into the heart of the oncoming war and crawl our way through a psychedelic tunnel, emerging to find ourselves face to face with the prototype Sugarplum Fairy (a flexible Stephanie Faith Sim, turning tricks as she shows off her impressive acrobatics moves on a suspended hoop), a toy from Drosselmayer’s own imagination. One cannot help but admire how spacious this room feels, with nicely designed clockwork gears lining the walls as Sugar quickly prepares audiences, now referred to as Marie’s toys, for the epic battle against the nefarious mouse-king ahead as we join forces with the Nutcracker while we’re served up beef goulash and basmati rice before we’re whisked off to the next room (again, through a hidden entrance with ‘complicated’ mechanisms) – where the final battle is already underway. 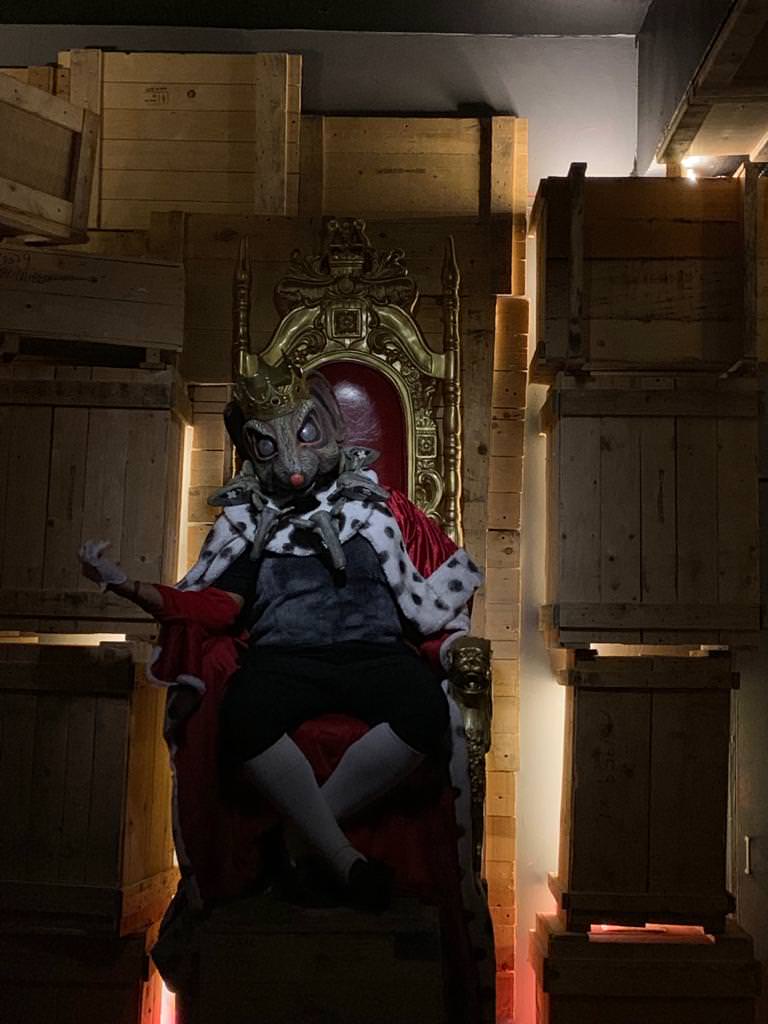 Finding ourselves in a room full of wooden crates, we quickly find a comfortable seat atop these boxes, and are introduced to our fearless leader, the toy Nutcracker (Jamil Schulze) now grown to human size and cursed with a hideous wooden mask for life. Before he even gets a chance to formally introduce himself however, the terrifying Mouse King makes his appearance (Ali Anwar, donning an impressive animatronic headpiece complete with glowing eyes by Paul Pistore and team), trash talking his way atop a golden throne before the round begins, unfolding rather unlike an actual war, taking the form of a sing-off instead. With countless squadrons before us felled in battle already, the odds don’t look good for team Nutcracker, as the Mouse King takes on an alternative version of ‘My Way’ that Frank Sinatra might even be proud of. Refusing to admit defeat, we join forces with the Nutcracker and do exactly as we practiced, with the Nutcracker even launching into his own solo over some seriously sick beats (on a very familiar song). Vanquishing the Mouse King fair and square, the rodent hangs his head in sorrow and shirks away before we’re rewarded with a mug of pumpkin soup topped with feta cheese foam, sunflower seeds and walnuts to warm our hearts and commemorate our victory! 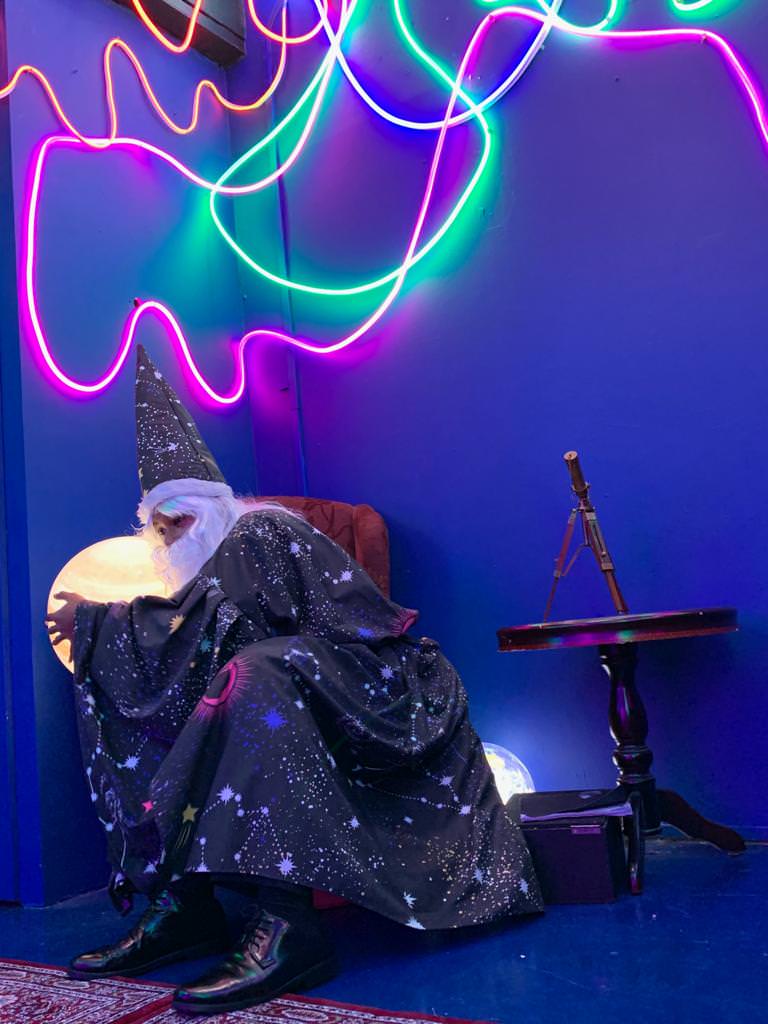 How does one top such an epic sing-off? It might be surprising, but the next room ended up as one of our favourites. Finding ourselves in a mystical, purple lighted atmosphere, Alex Foo’s lighting design here is off the charts, as we stand mesmerized by colourful tubular lights forming ‘constellations’ across the room. Welcomed by the Court Astronomer (Nazray Shaik), the wizened and bearded wiseman gathers audiences in a circle, astonishing us with his charming ‘divination’ skills. Seated all around him, it makes sense that the next segment would naturally be a storytelling one, with a twist: it’s an interactive one, as audiences chime in and are tasked to play various characters and sound effects (often cast completely against type) while we dined on bangers and mash with truffle oil. Be sure to have a taste of the homemade candied bacon while you’re here (comes in both pork and non-pork varieties), which we’ll say we can only wish we could bring a whole bag of home. By the end of this room, the audience had already left the tension of the final battle behind us, all smiles as we made our way to the final room: The Kingdom of Sweets. 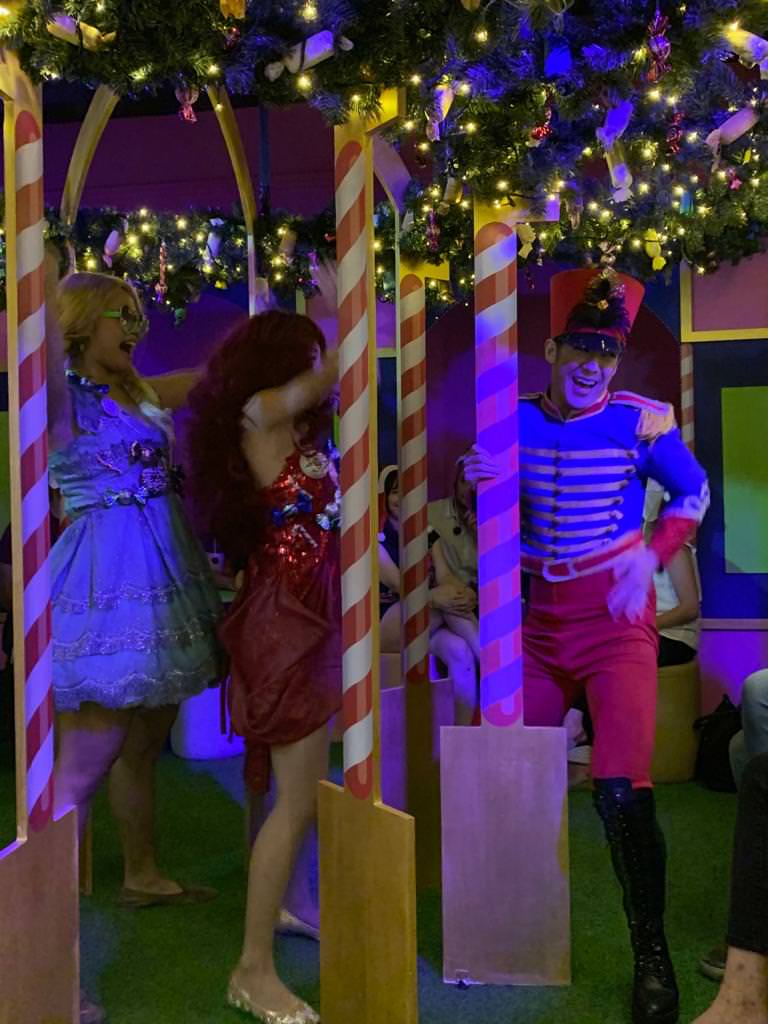 Finding ourselves in what can only be described as a candy forest, we meet the Nutcracker once again, but now in a very different form. With his curse lifted, the mask has finally come off and we’re presented with a handsome real man (Ryan Ang). Joined by his fellow citizens – the sexy candy trio Anna (Claudine Liang), Berta (Hasha Yaqazah Binte Sulaiman) and Olga (Day Cutiongco), each of these voluptuous sugary sprites were ready to perform their dance as they put on a titillating show for the entire room. We finished off our meal with an orange sorbet with a roasted peanut salted caramel crumble, appropriate for the Kingdom of Sweets, and one can also expect some very cute sequences as the Nutcracker realises his true love at last (and even a sugar-sweet marriage proposal!), bringing this story to a  saccharine happy ending. 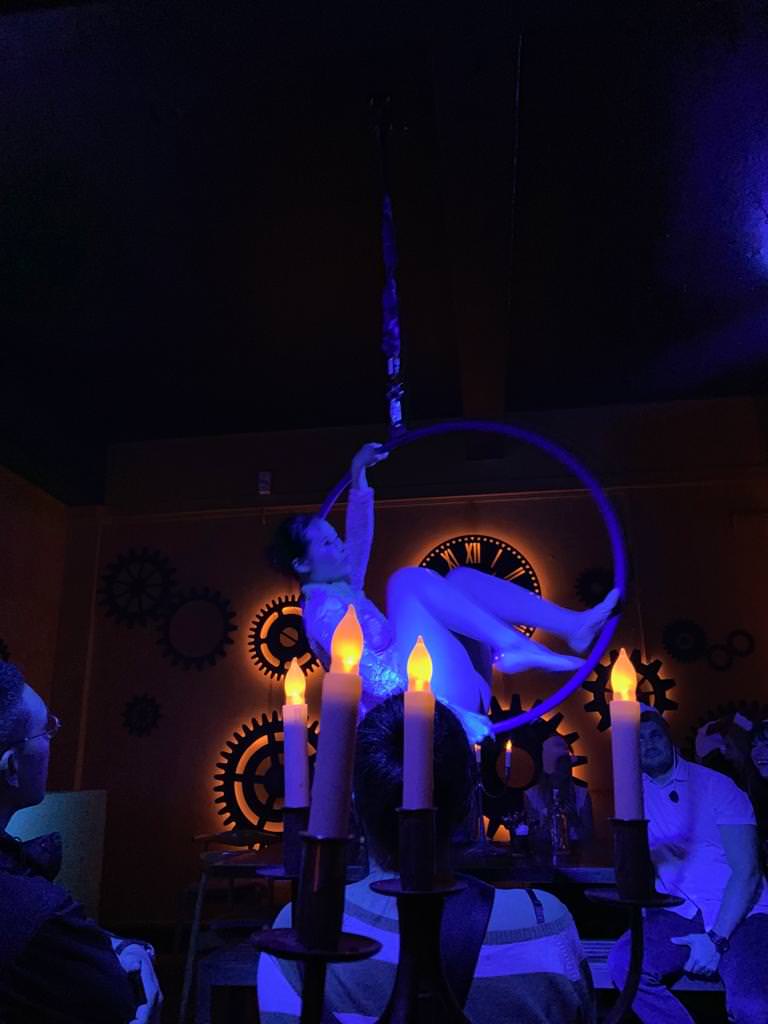 Armed with more impressive design elements than ever before and a witty, engaging script that promises plenty of chortles, Marie and the Nutcracker brings Andsoforth’s signature multi-room immersive dinner theatre experiences to greater heights than ever before. This is a production that fills us with warmth, joy, and most important of all, the Christmas spirit, and makes for a perfectly fun, theatrical night out with family, friends, and Andsoforth.

Marie & The Nutcracker runs till 6th January 2019 at a secret location. For more information and tickets, visit Andsoforth