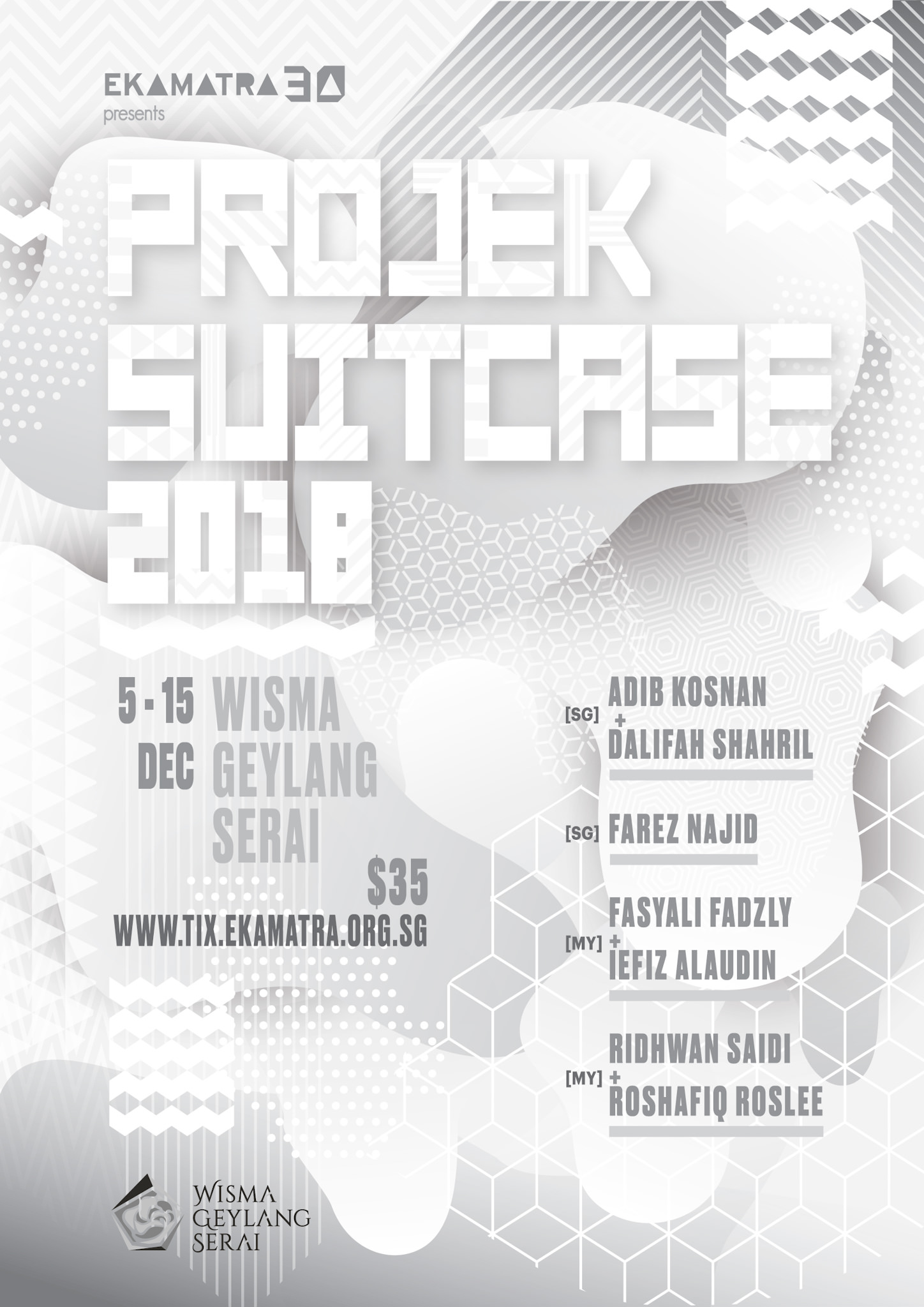 An assortment of short monodramas reflecting on what it means to live – and die.

Teater Ekamatra’s site-specific Projek Suitcase series follows a simple poor theatre format – one actor performs a short monodrama, equipped with minimal props, lighting and costumes, celebrating the power of the voice and traditional storytelling techniques. For their latest edition, held at the brand new Wisma Geylang Serai, they’ve taken on the theme of “Die Before You Die”, a familiar quote that considers one to think about what is truly valuable and important in one’s life, and what one hopes to have achieved and take to the grave, better understanding what life itself means.

Gathering eight artists from Malaysia and Singapore, Projek Suitcase unfolds like a box of assorted chocolates – it’s a variety pack of performances that pushes and pulls, often leaving one surprised at the possibilities that emerge from a simple suitcase. Unusually, each of the four monodramas presented in this edition take place not in a normal stage, but in nooks, crannies and empty voids in the very new building. Taking place at night, in the absence of most outside activity, there is almost something ritualistic and mystical about watching each performance unfold in their demarcated space. 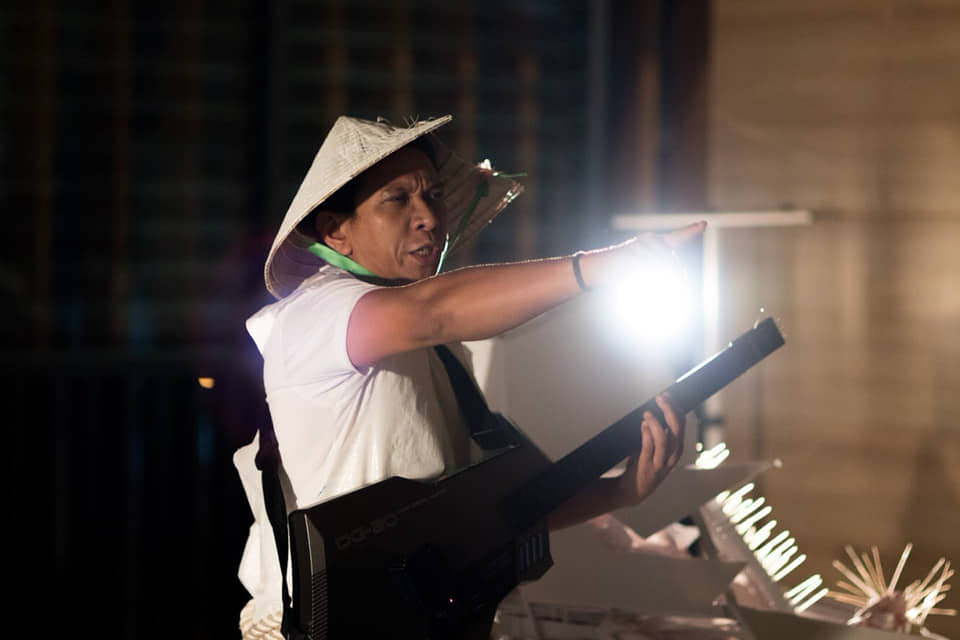 Projek Suitcase takes the form of a ‘tour’, as rockstar ‘tauke panggung’ (or ringmaster) Rizman Putra arrives on the scene with much fanfare, dressed in a white getup (including a white conical farmer’s hat and white streamers) while an assistant pushes a white trolley holding a speaker, perhaps a symbol of how one carts around one’s personal emotional baggage. Opening with a jaunty original rock tune while strumming his guitar, Rizman’s complete devotion to his character easily sets the mood for the rest of the evening, preparing audiences with a new song before every performance as he leads us compellingly, Pied Piper-like, from space to space within the building, helping link all four pieces together visually and sonically. 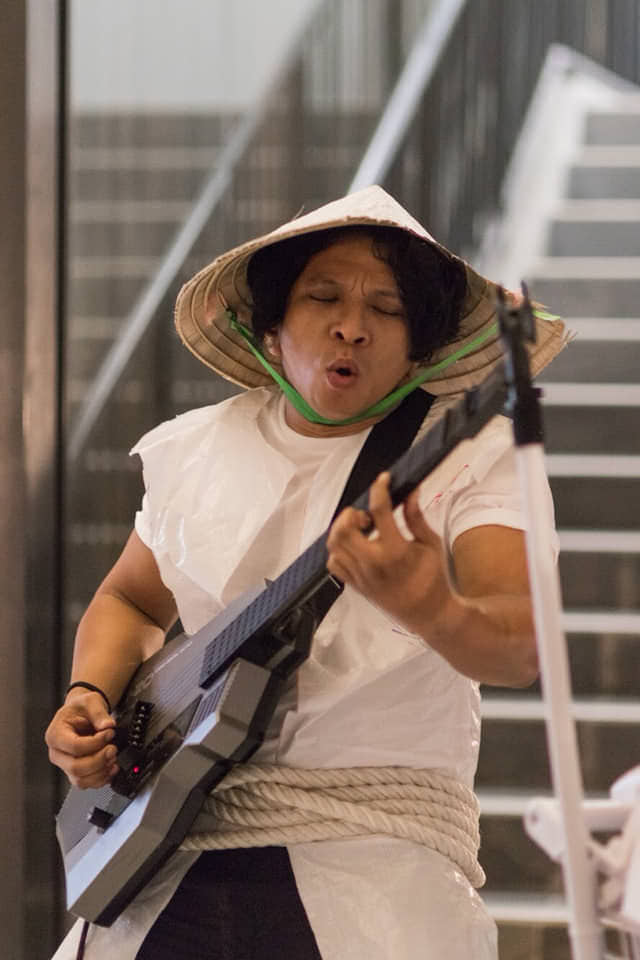 The colour white also recurs throughout Projek Suitcase, manifesting in the set, with lengths of white tape forming shapes and patterns on the ground. This whiteness is reminiscent of the white shroud corpses are wrapped in at Muslim funerals, constantly calling back to the theme of death and dying. As a space, Wisma Geylang Serai feels like a meeting of the old and the new in its design, its emptiness and quietude a kind of limbo between heaven and hell as characters reflect on their lives, either on the verge of death of undergoing deep spiritual loss. Interestingly, each actor’s performance space also changes each night, showcasing how flexible and versatile each piece was that it could adapt to be performed in just about any space. 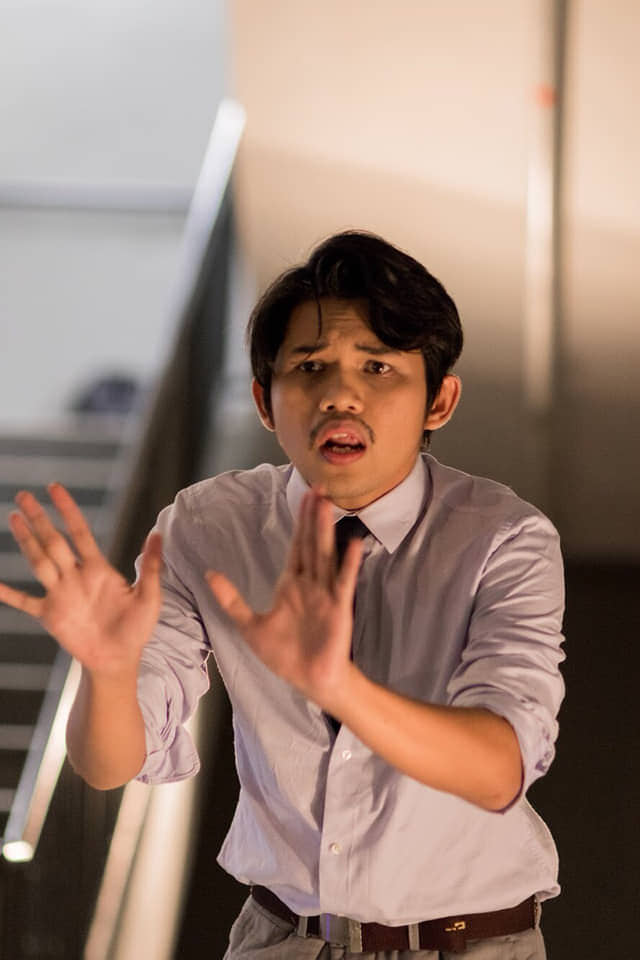 In the first performance, we watched Malaysian writer Ridhwan Saidi’s “A Story of a Man Who Got Enlightenment After His Shoes Got Stolen At The Mosque One Evening”, whose title perfectly summarizes the plot. Having previously seen his work in KL, we were delighted to see him maintaining what seems to be his signature style of off-kilter, deadpan drama. Performer Roshafiq Roslee takes on the titular role, his face showcasing various states of grief as he ponders over the loss of his shoes, from a quiet sadness to a transcendent glow as he makes peace with the loss. The work also pays careful attention to minute details to make Roshafiq’s performance more realistic, such as going through the familiar steps of washing one’s face and feet before entering the ‘mosque’, and clearly establishing the invisible boundaries that demarcated the area it occupied. 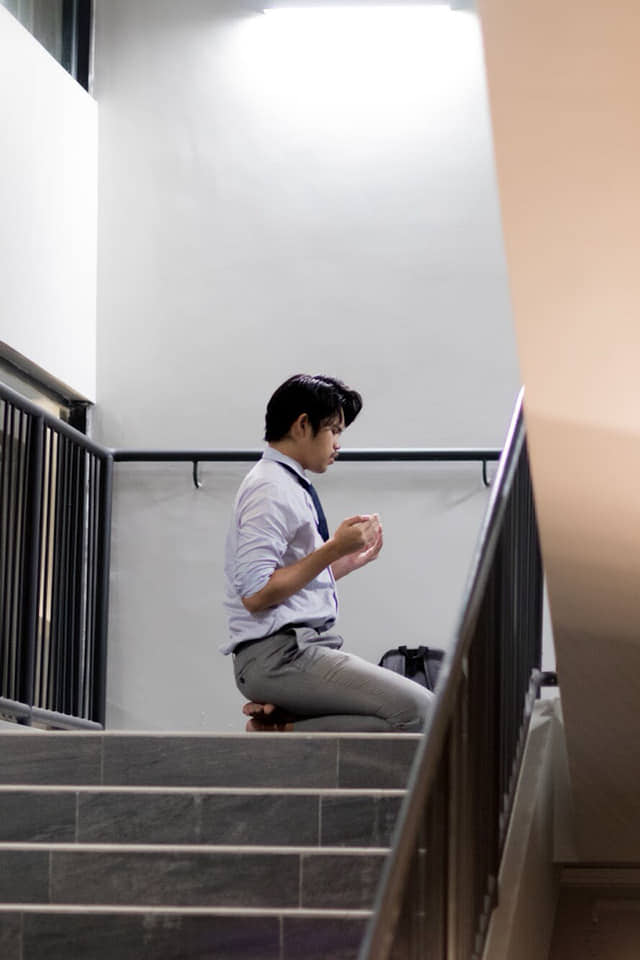 There’s also a degree of laugh out loud humour as well, mostly from how invested Roshafiq is in his role, and the utter seriousness with which he plays it, such as how he ponders the appropriateness of going barefoot or with mismatched shoes. At one point, he even puts on a stranger’s pair of trainers and performs a shuttle run with them to test them out. What is so powerful about this piece is its ability to utilize seemingly ordinary routine or phenomena to discuss far greater philosophical themes, leaving one with wonder at how it is often the little things that leave us the most affected, triggers that activate the realisation that in the grand scheme of things, it is the material things that are inconsequential, and the spiritual that stay with us. 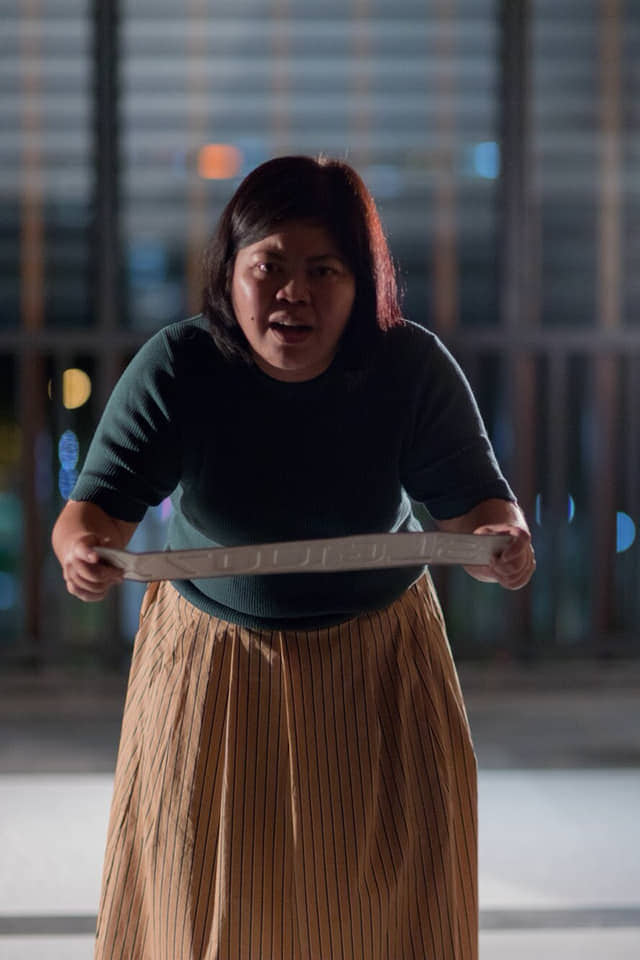 In our second performance, we move to the next space and watch actress Dalifah Shahril perform Adib Kosnan’s ‘Flicker’. Telling the story of a woman trapped in an abusive relationship, Dalifah’s character begins to lose her mind when she is gaslighted, unable to trust even her own memory when her partner toys with her messages and watches her every move. 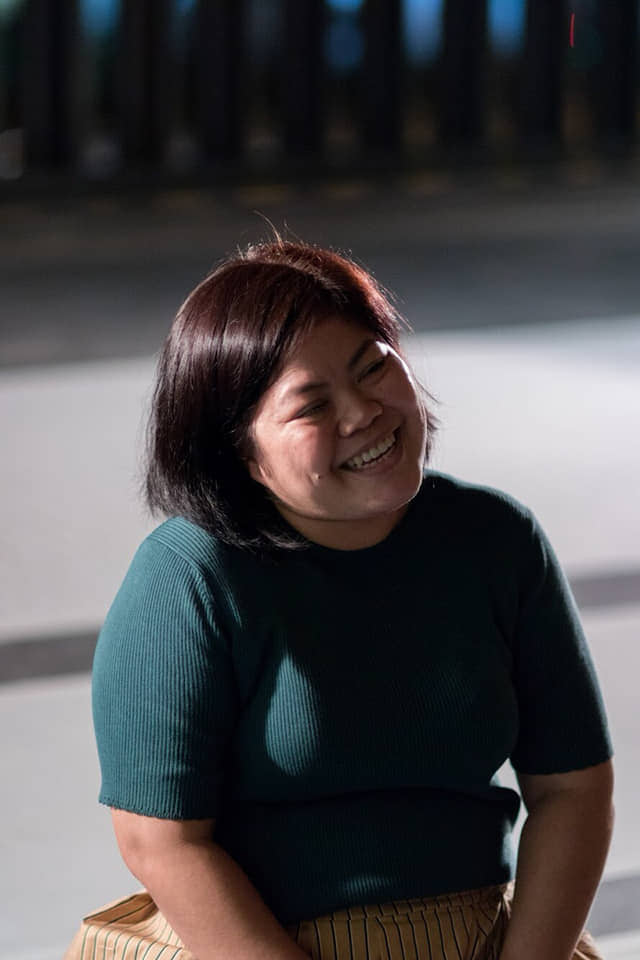 Of the four pieces, this was perhaps one of the weaker ones – although there was the potential to draw out more emotions and turn Hitchcockian with an unreliable narrator, the end result lacked nuance and was unable to give Dalifah, a strong actress in her own right, enough to work with.”Flicker” ends up taking on a predictable narrative that revealed little more than what we already knew – bad people can make you go mad when you spend too much time with them. 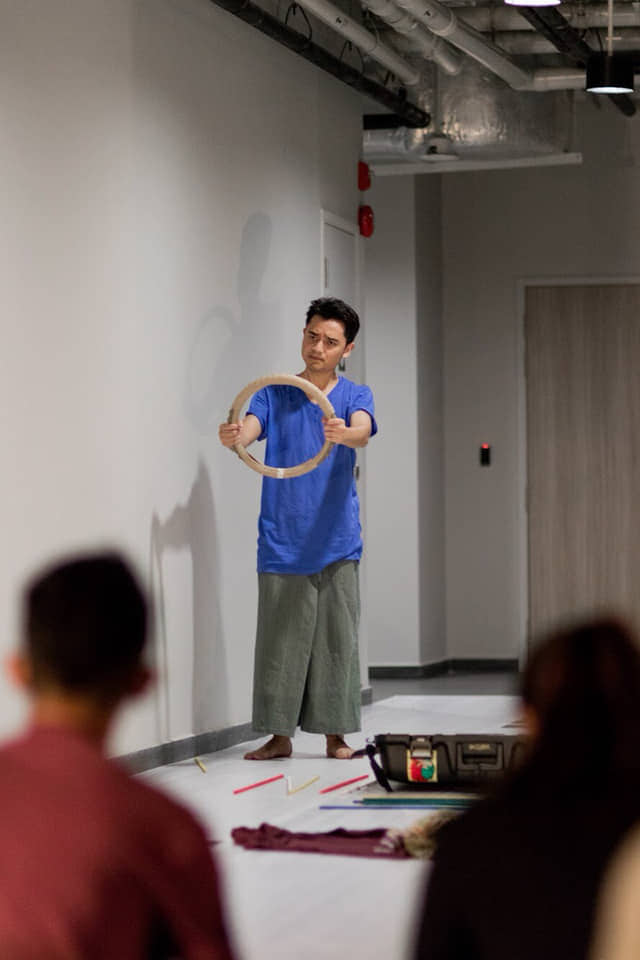 The third performance we caught was perhaps our favourite piece of the night: Fasyali Fadzly’s “Dying and Living Again”. Performed by Iefiz Alaudin, the piece makes full use of the poor theatre style setup, with Iefiz taking on the role of a storyteller and opening with a demonstration of pick up sticks (and eventually, enlisting audience members to help). Each set of coloured sticks corresponds to a set of monologues from different characters – a mother, a son, an actor, a corpse and even a cat, all of whom are inexplicably related in some way or the other. 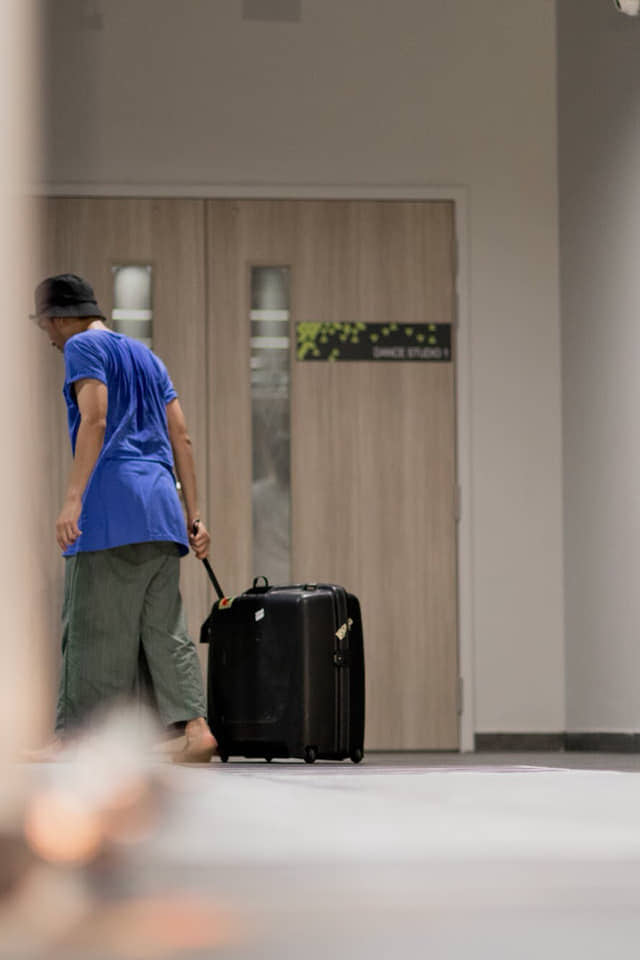 Jumping from one character to another was initially a little confusing, but Iefiz deftly changes his physicality and voice to easily metamorphose with minimal props, each change marked by a musical cue and him returning to stand in the suitcase each time he swaps characters. Each character is also locked to a specific area of the performance space, making it easy to identify which one he is portraying at any one time. Fasyali’s script gives us brief glimpses into each character’s disparate lives, yet each linked by their going through some form of loss or death. Much like the game of pick up sticks, each characters learns to come to terms with these rapid, sudden changes in the status quo, and ‘pick up’ their own lives, learning to let go and move on. A surprisingly powerful piece given its brevity, “Dying and living Again” leaves us oddly comforted by the fact that everyone in the world is going through some kind of loss, sharing the struggle together, but that hope lies at the end of the ordeal. 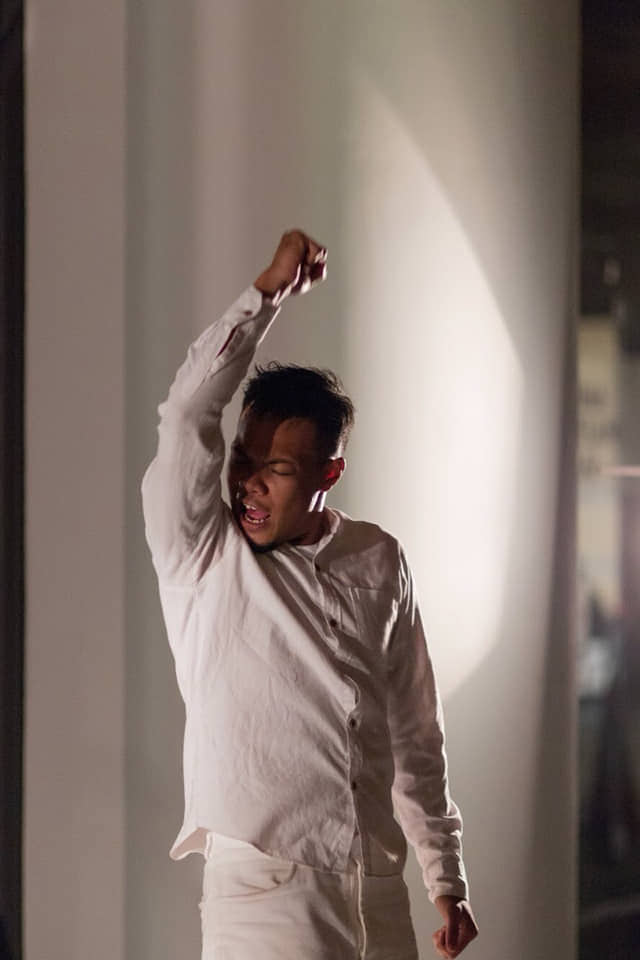 We ended the night with Farez Najid’s “Hitung”, in which he also performs the piece. “Hitung” concerns itself with an otherwise unremarkable 25 year old man forced into committing some untoward crimes after making mistakes in life. “Hitung” has a lot of potential – while its interactive elements require some tweaking and its pacing and multitude of characters can be hard to follow at times, at its heart is an intriguing tale about what right we have to judge another’s actions without knowing their whole story, one which we’d love to see further develop in future. 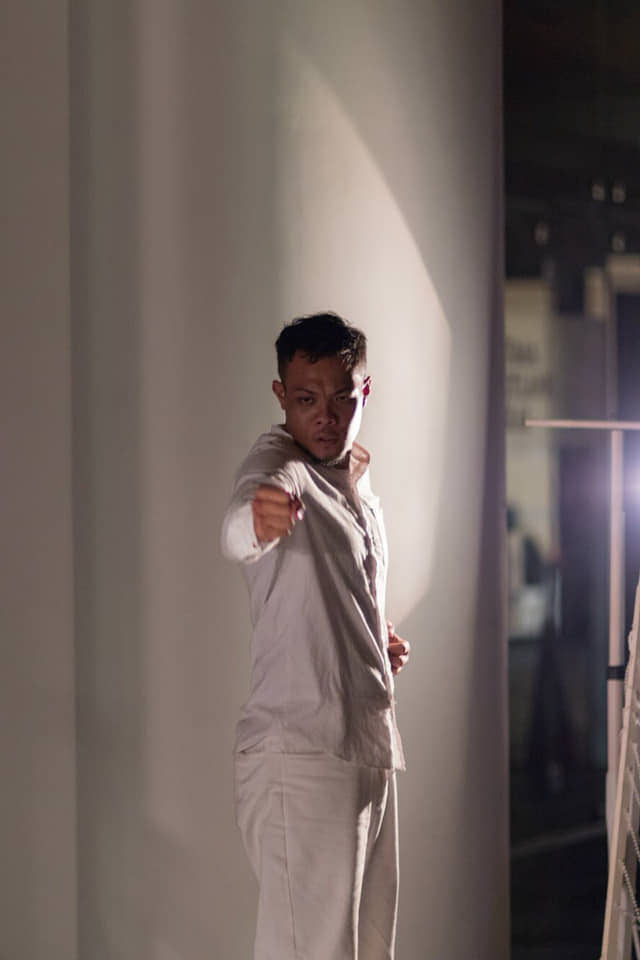 Ultimately, Projek Suitcase acts as an interesting showcase platform for these new works, allowing them the space to breathe, develop, and take on greater meaning given the site-specificity of the venue. One is left with plenty of food for thought on the gravity and impact of death and loss, and how such a shock to the system leaves us with more clarity than ever before, as each work forces one to consider what it then means to live.

Projek Suitcase 2018 played from 5th to 15th December 2018 at Wisma Geylang Serai in Malay and English with English (translation booklet).