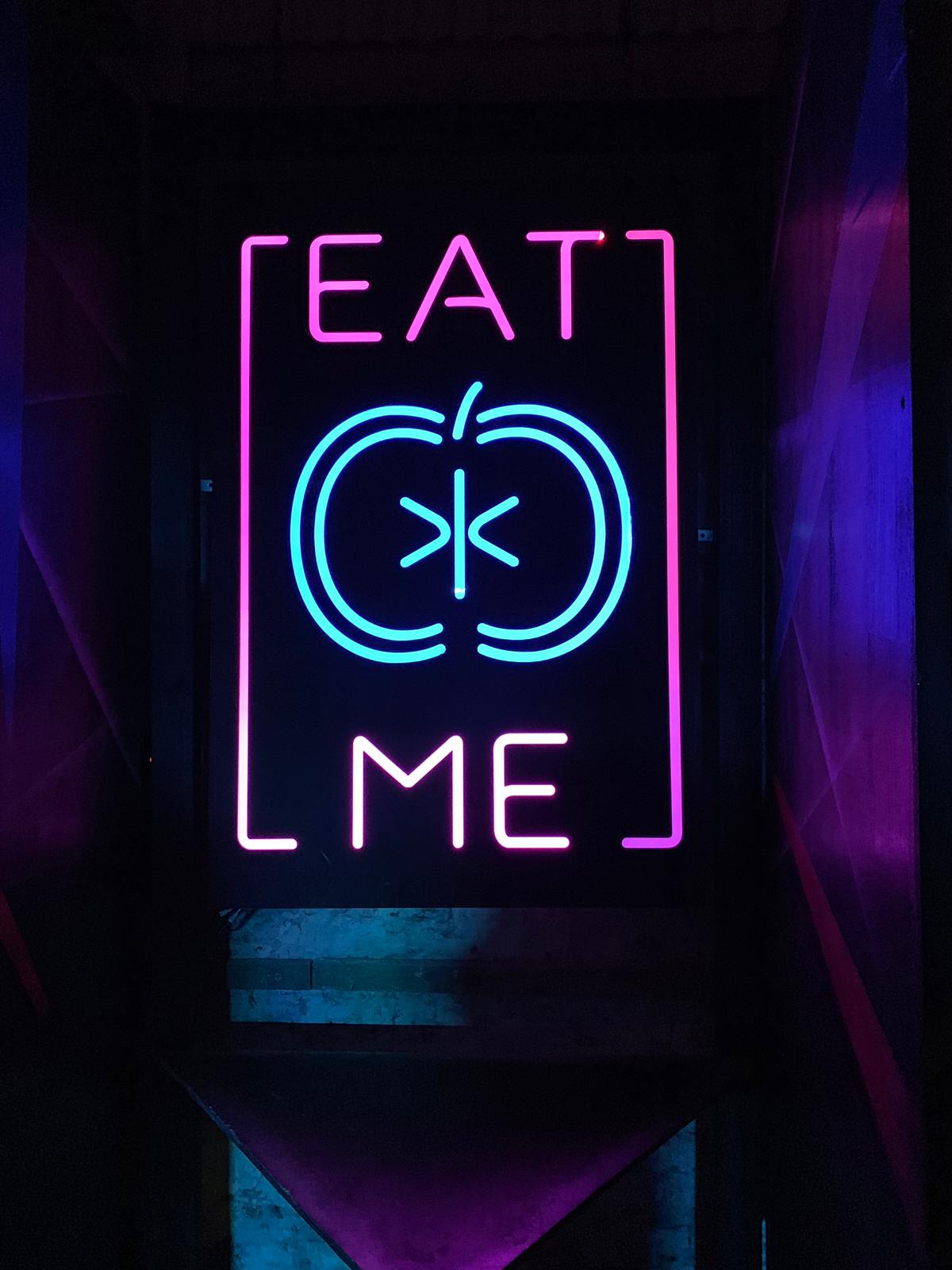 LONDON – You may have been to parties before, but have you ever been to one thrown by the gods themselves? Taking inspiration from Greek mythology, Shotgun Carousel presents a positively heavenly immersive dining experience with Divine Proportions, transforming The Vaults completely into celestial party central. 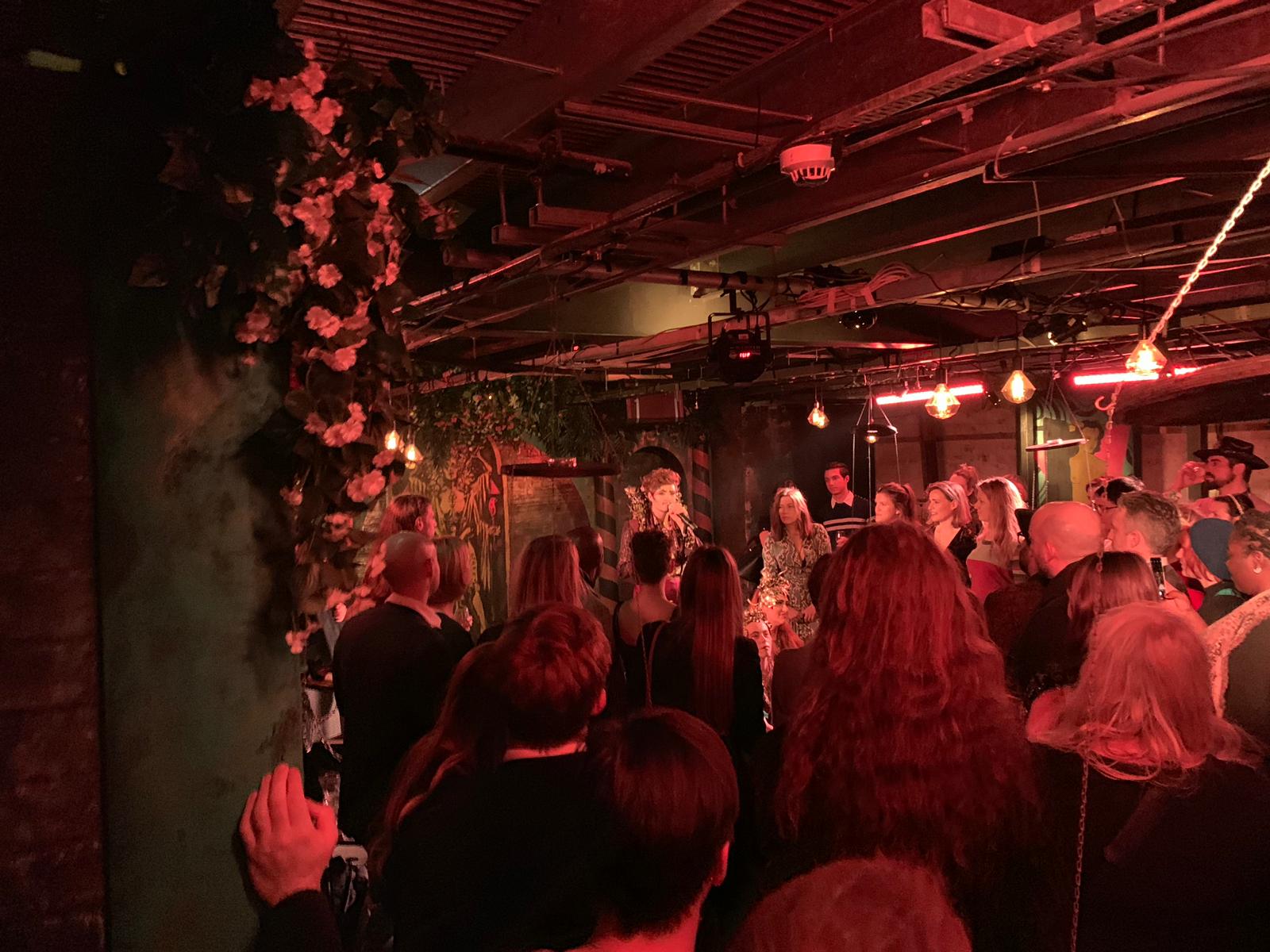 Conceptualized by Laura Drake Chambers, directed by Celine Lowenthal and with a script by Cressida Peever, hedonistic revelry is the name of the game when it comes to Divine Proportions; put on the guestlist of Dionysus (Di), it feels like a proper party from the moment we step in to the underground world of The Vaults once we gain approval to enter from our female bouncer at the door, wandering over to the bar to get us a little tipsy before the festivities began. 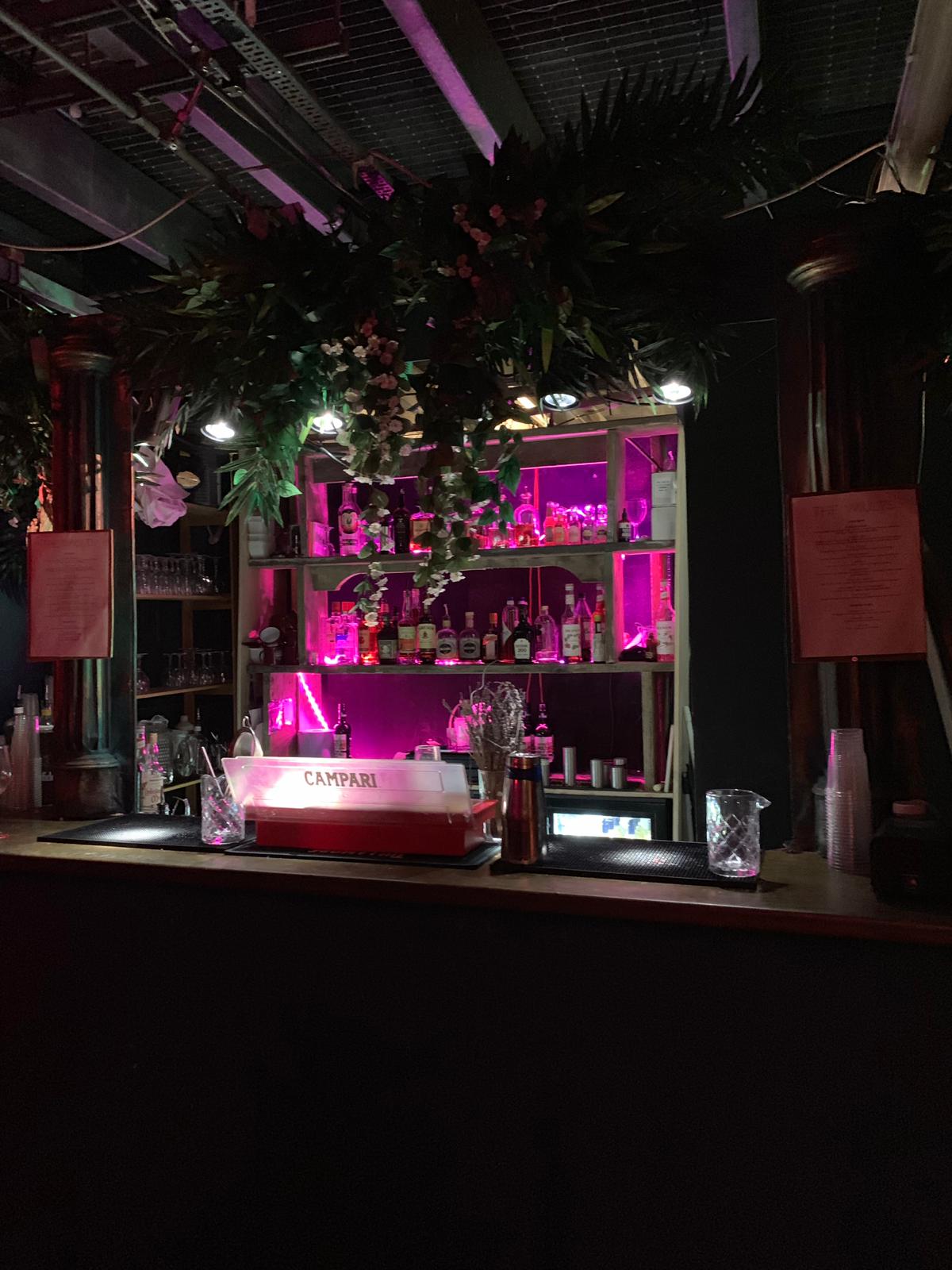 Appropriately, the bar served up thematic drinks named after the gods themselves, the ‘Midas Touch’, a prosecco laced with gold dust to the Four Roses bourbon-based Aphrodite’s Rose. 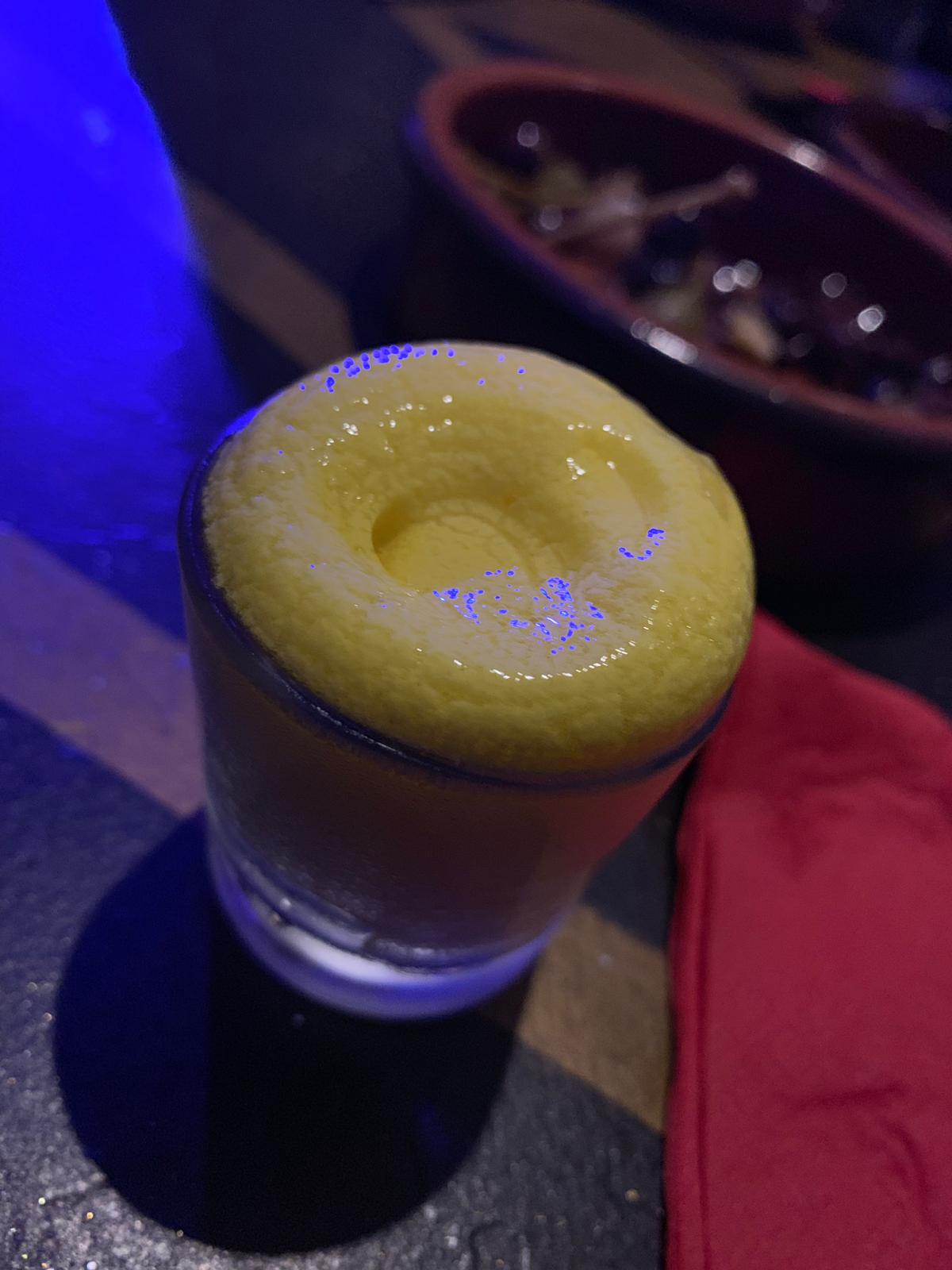 We began the festivities with some bread, a Cornucopia of home-baked sourdough foccacia, caper berries, artichoke hearts, olympic olives, dipping virgin oil, balsamic and honey, certainly fit for divinity, before coming face to face with the Maenads, devout followers of Dionysus. Setting the tone for the evening, these revelers revealed that tonight was Ritual Day, and prepared the audience to join in this ritual. 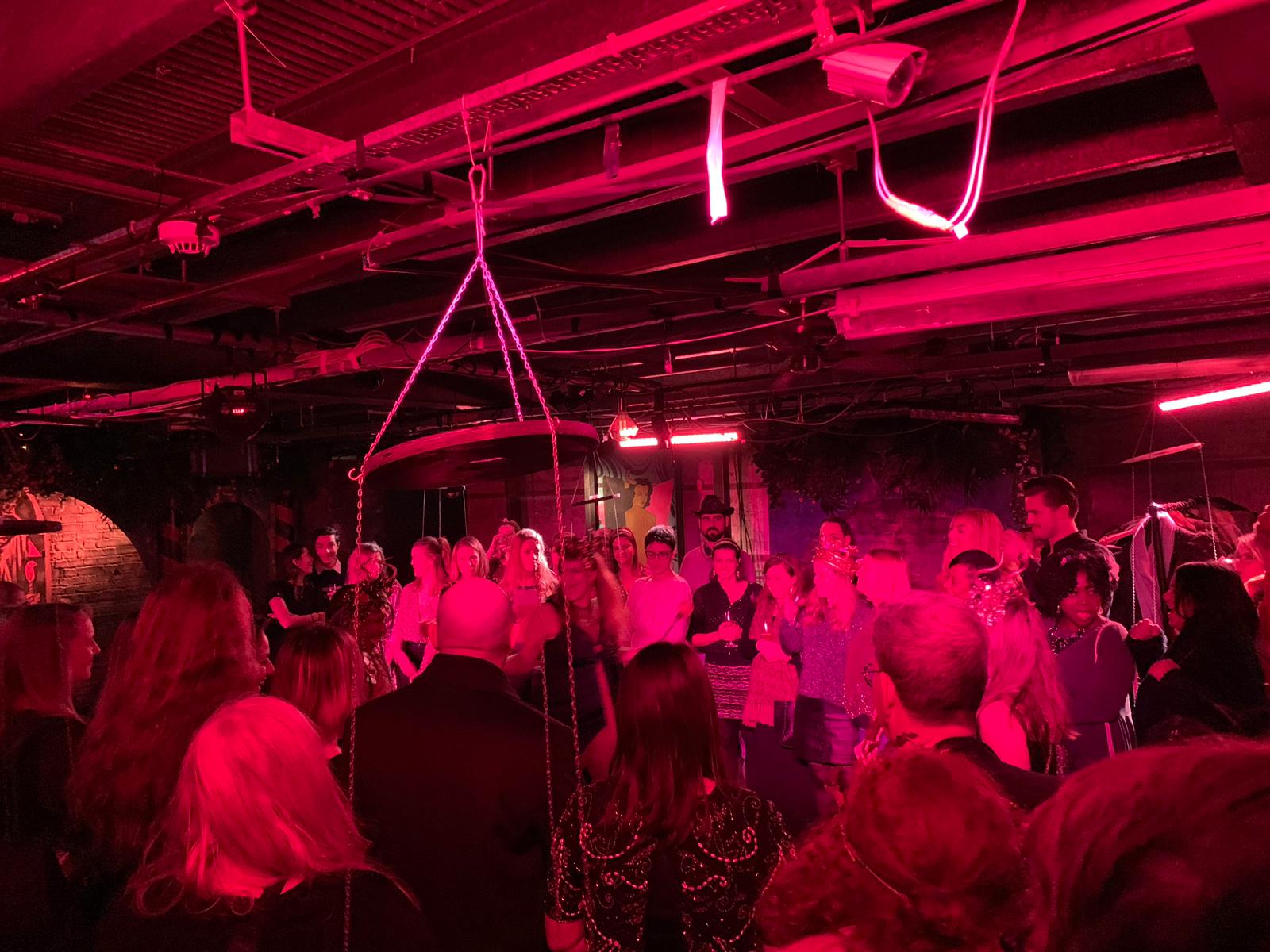 With the appearance of our host, Di herself, we began our descent into our mad rave for the evening, ready to “feel Greek loins” as a circle was drawn, drums are beat and the ritual begins, tribal and trance-like. 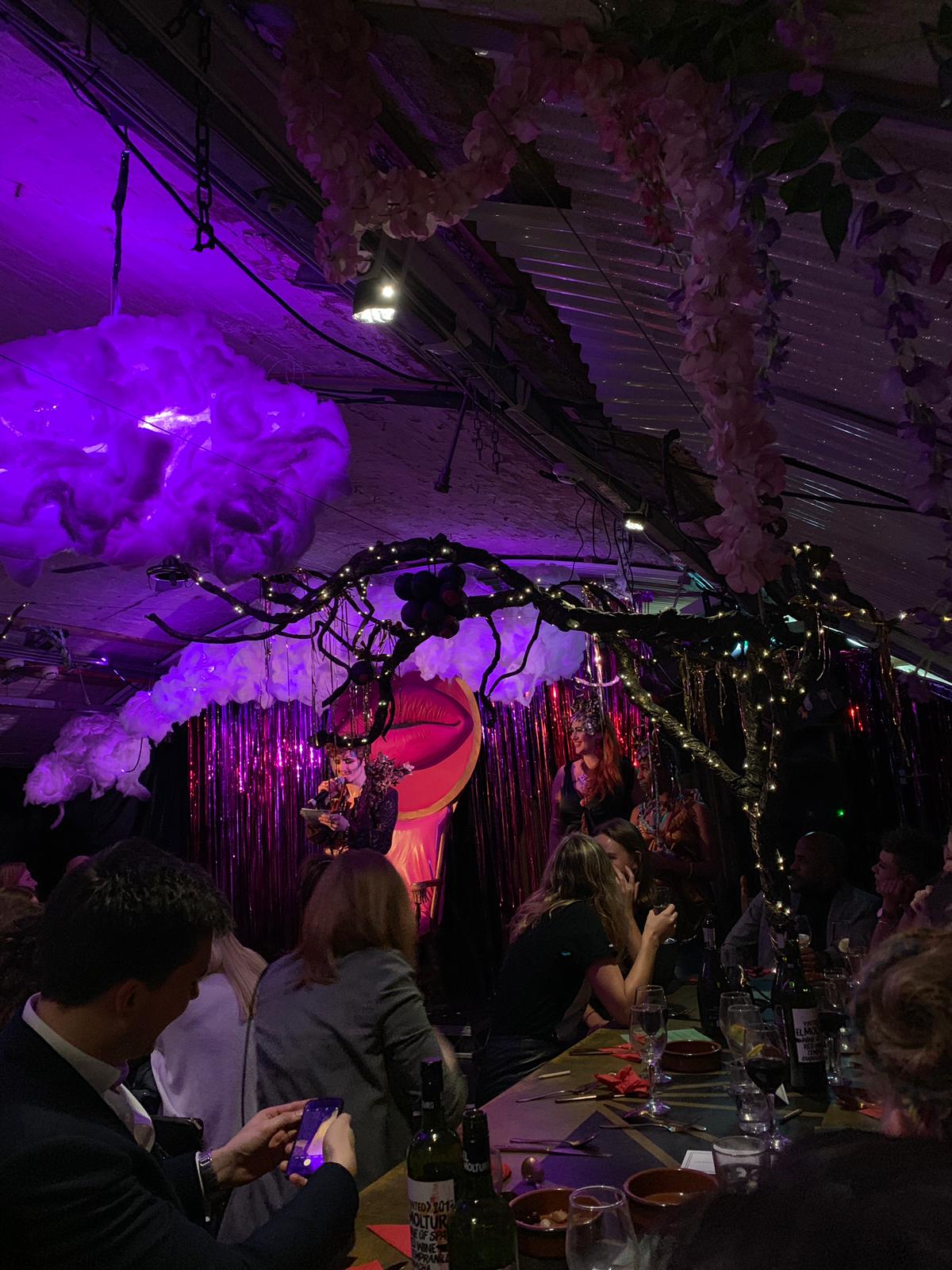 Now under the spell of Di, she proceeded to address us as her loyal subjects, serenading us with, appropriately enough, a song from the queen of pop herself – Madonna’s ‘Like A Prayer’, as we worshiped her, starstruck by her godly presence and infectiously charming persona. There must have been some kind of magic in the air (or the drinks), for audience members were even compelled to get up and dance as they listened to the catchy melody, promising us more fun in the evening still to come. 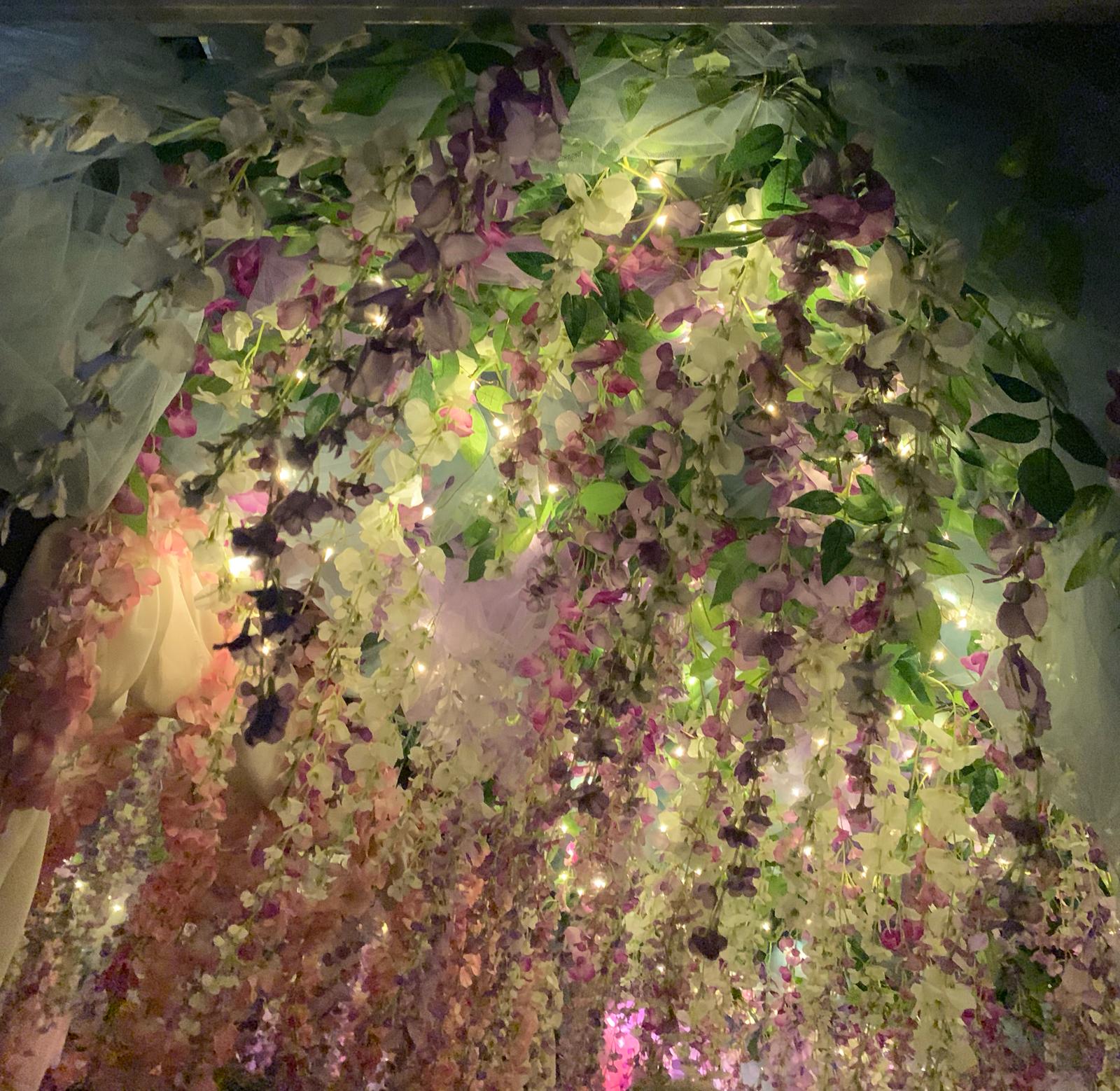 With the formalities of the ritual over and done with, it was time to ascend the sacred route to Mount Olympus itself, with Samuel Wyer’s lush set capturing the natural grandeur of the peak on a starry night, with grapes hanging from wines, soft glowing clouds hovering above us and glittering trees. Seated at tables, we readied our spirits and stomachs for the grand feast we were about to partake in.

Prepared by Chavdar Todorov, Steven Estevez and their team, this feast featured dishes each themed after a god of the Pantheon, beginning with ‘Mercury’s (Hermes)’, an aperitif of Cardamom vodka, Riesling bitters, Limoncello and turmeric, while olives (appropriately Greek) were served as nibbles alongside it. Our next source of entertainment was the night was the whimsical Aphrodite, goddess of love, as she spoke of earthly pleasure and procreation, her over the top antics and energetic character leaving us head over heels in love with her. 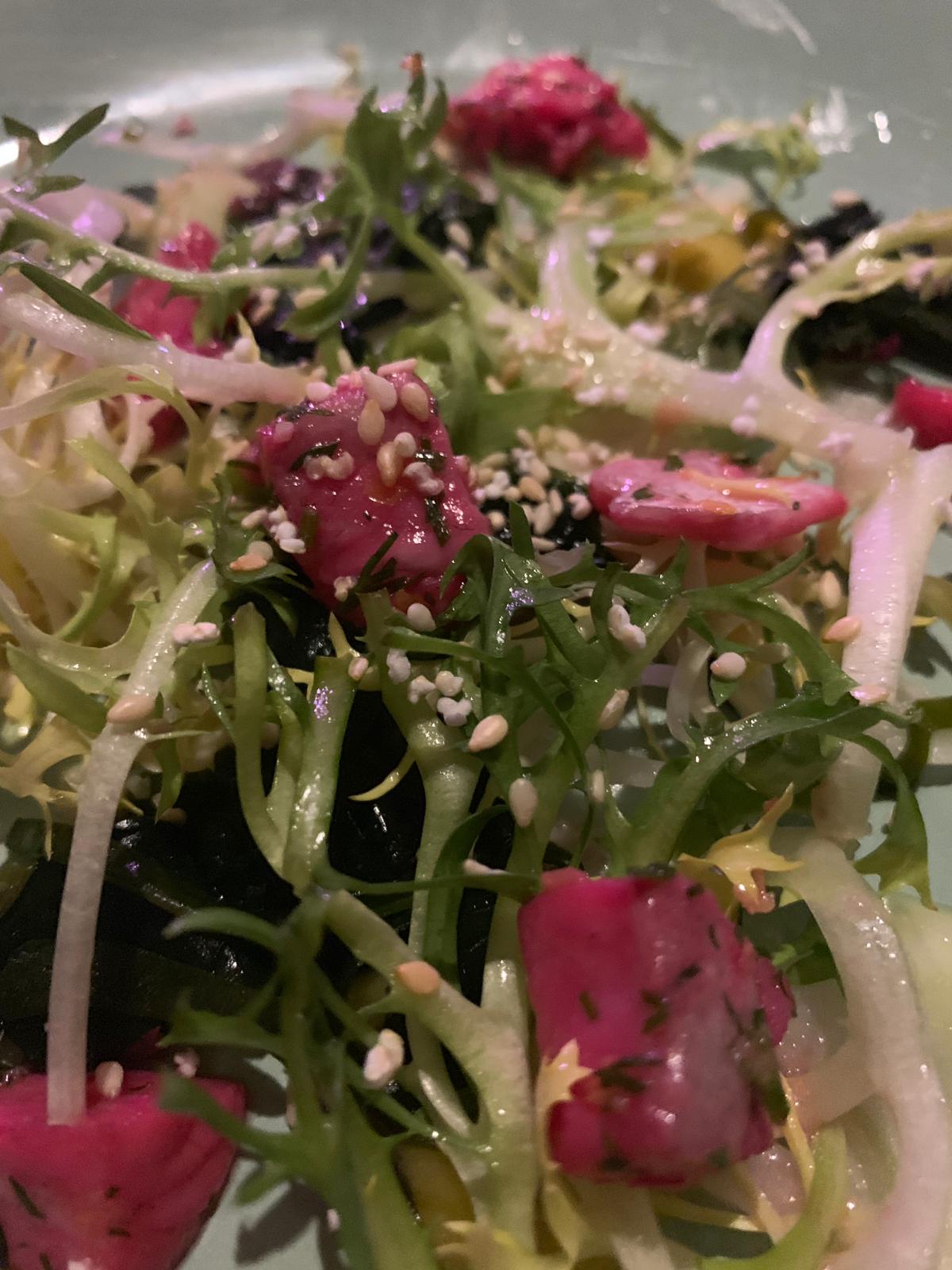 The meal continued with ‘Jupiter’s (Zeus)’, our starter of pink sea bass ceviche, paired with seaweed salad, pickled cucumber, shaved fennel, orange puree, puffed amaranth and toasted sesame for a fresh, oceanic beginning. As we ate, Di and her Maenads provided plenty of entertainment as they weaved around the tables, engaging diners in conversation and getting to know them better. 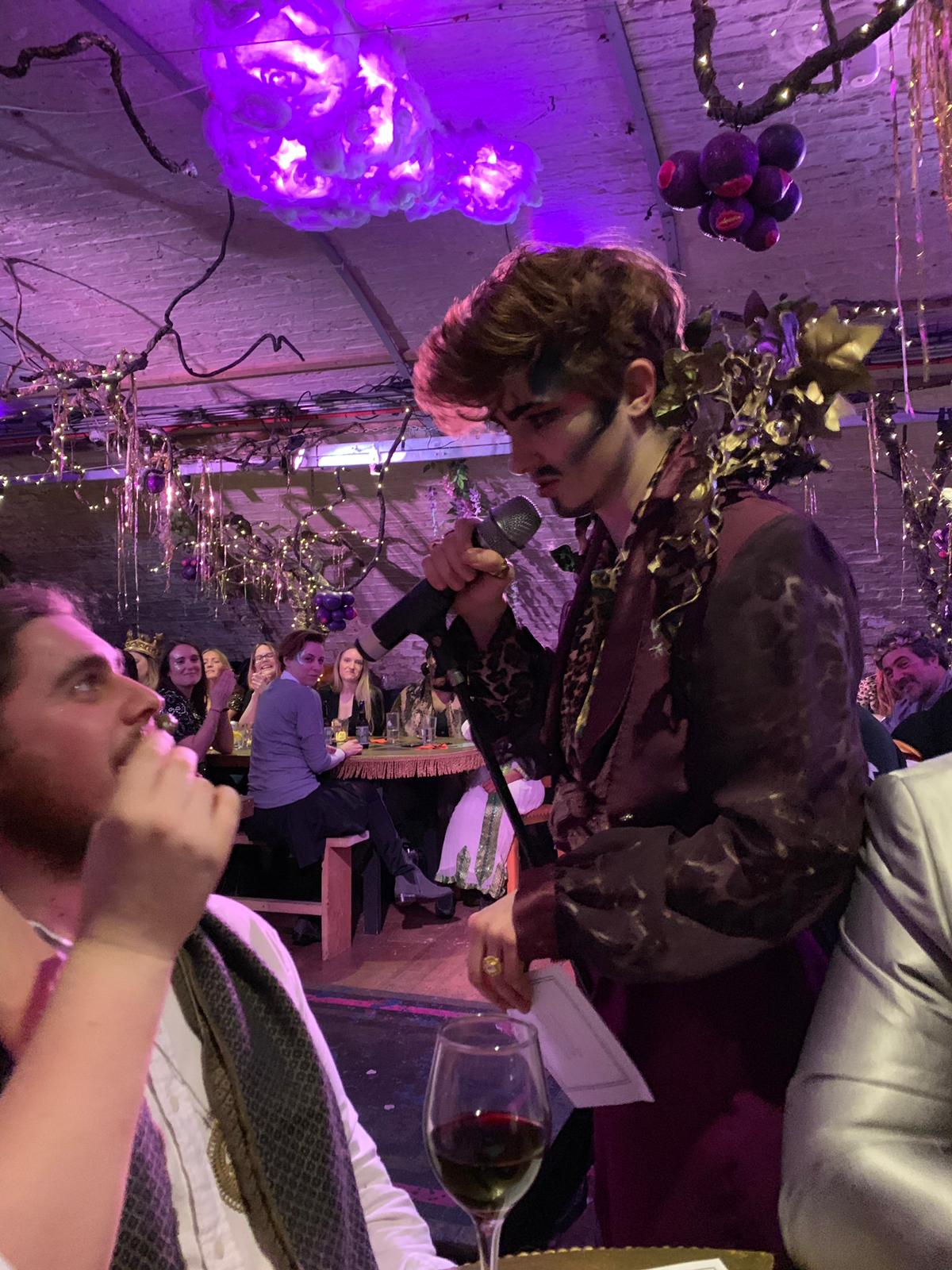 Perhaps most titillating of all was when audiences were asked to get a little frisky, a little naughty, and to share our innermost desires. With a little food and booze in our bodies, we were more than compliant to have a little fun with it, and it wasn’t long before some explicit wishes and desires were shared with the entire party, leading to plenty of laughs and smiles all around. 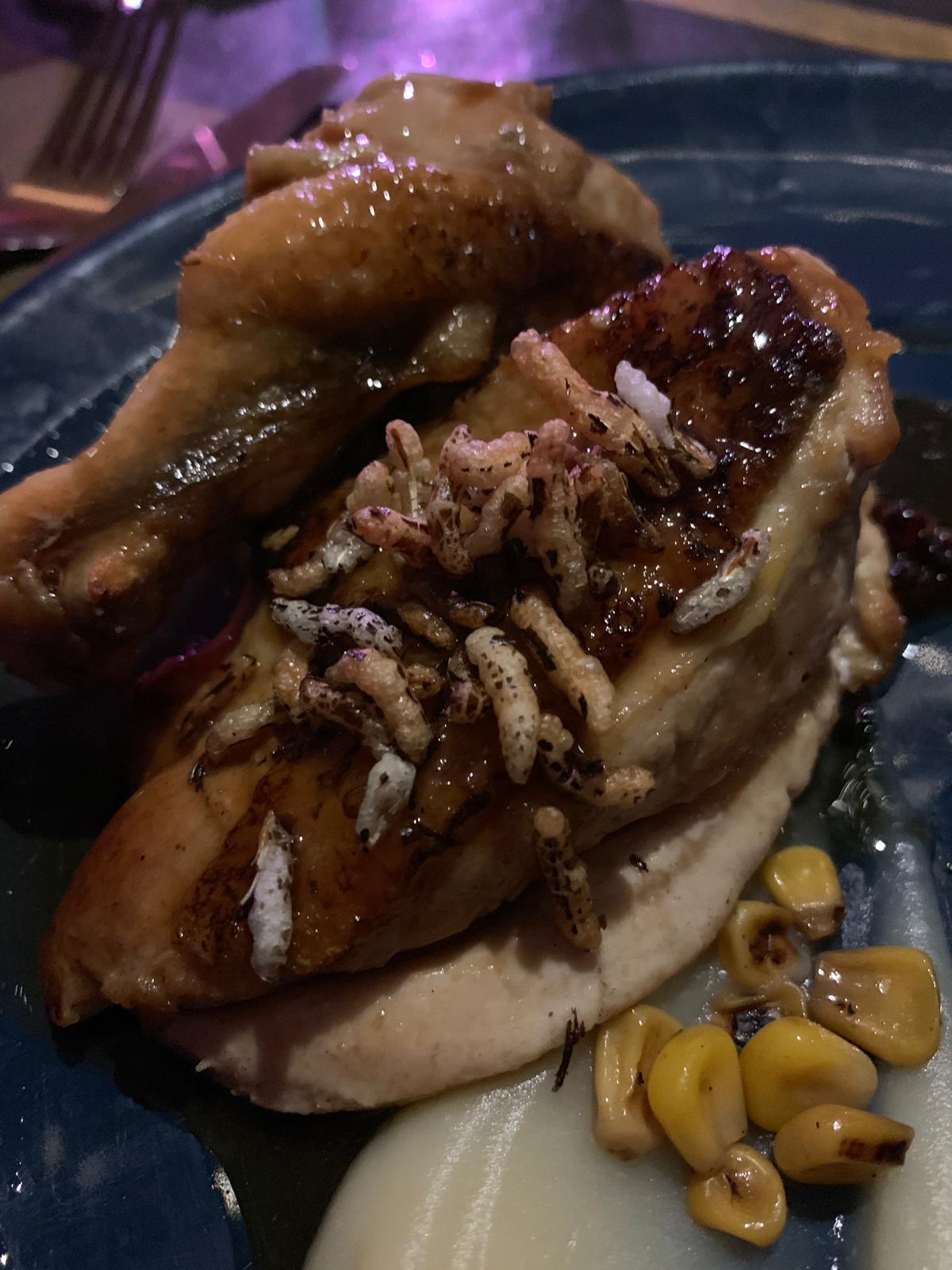 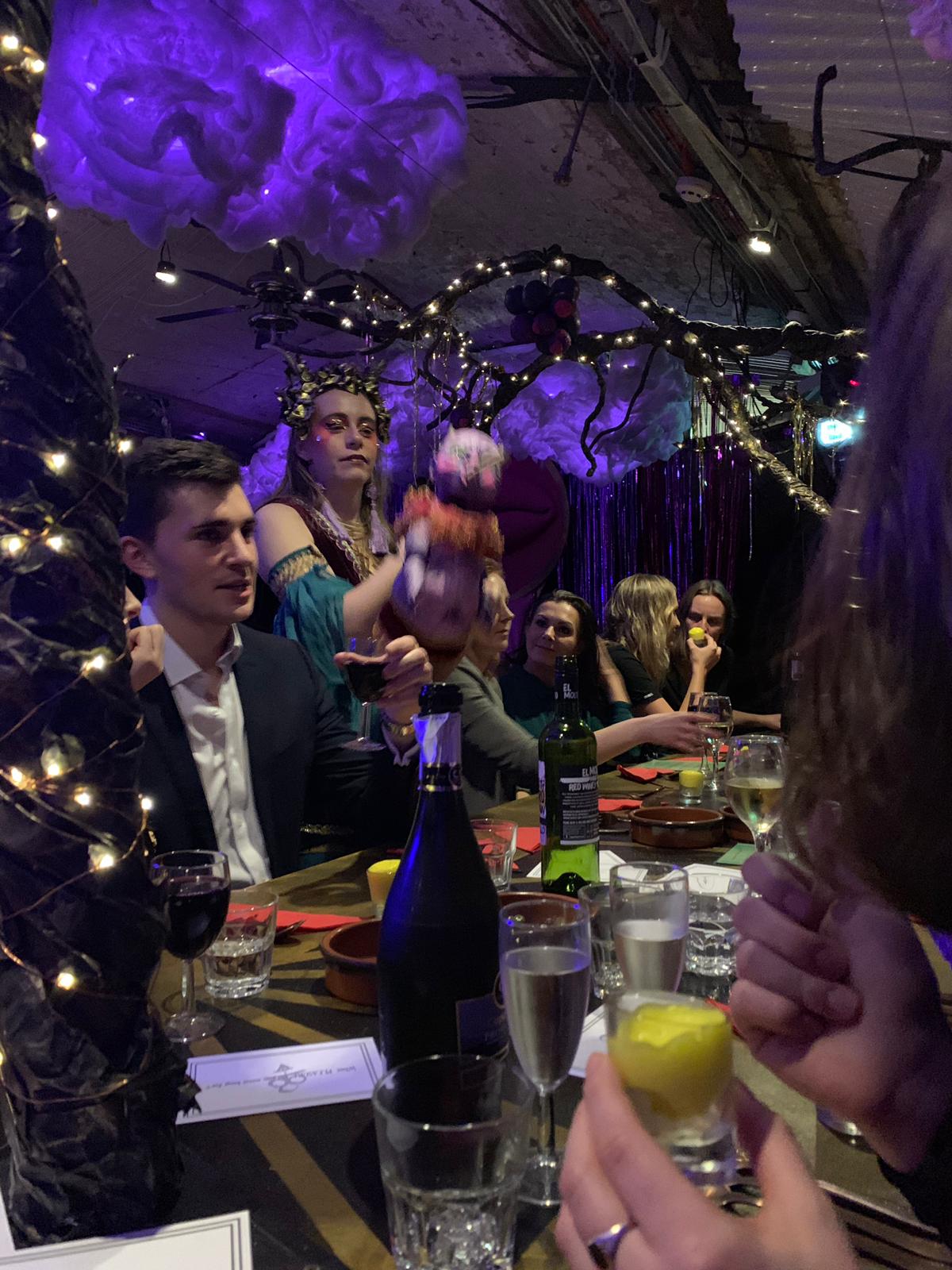 Seated together with the other diners in this style of communal eating was a nice throwback to a simpler, more ancient time, as we felt free to speak and converse while the wine flowed and we tucked into the great food. It was without any doubt in our hearts then that when we were asked to cement our faith and devotion to Di’s posse, there was no hesitation as a heart was drawn on our palms, and sealed our loyalty to her noble cause of hedonistic pleasures. 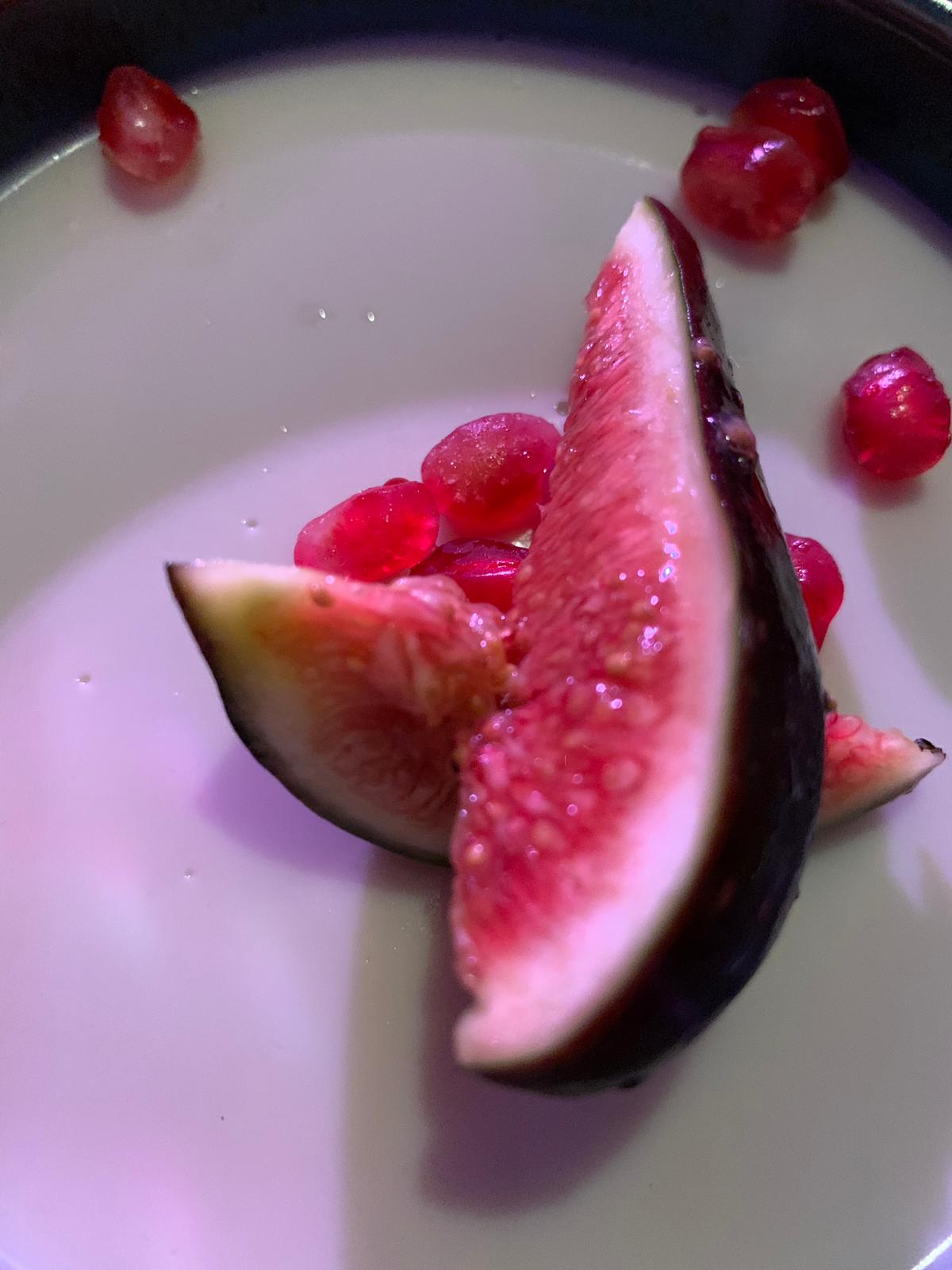 Finally, it was time to end with the last dish of the feast – a gift from Juno (Hera) comprising caramelised white chocolate, coconut milk and honey ganache, pomegranate, figs and flowers. Beautifully presented, dessert was intended as a sweet start to our initiation into the cult of Di as she channeled Annie Lennox and sang Eurhythmics’ Sweet Dreams (Are Made of This).

But surprise! The path to pleasure isn’t so easy, as Persephone, wife of Hades and the queen of darkness herself appears to sweep us off our feet with an invitation to an even bigger party in the underworld. How could we resist, as she performed a breathtaking, sensual, no holds barred dance charged with sexuality, even pouring hot wax upon her legs to coagulate. A devilishly erotic sight to behold, she barks her command: “Go forth and satisfy!”, continuing to stun as she continues to raise the bar high with each act, swallowing fire and ending with an energetic dance routine that left us sweating with awe. 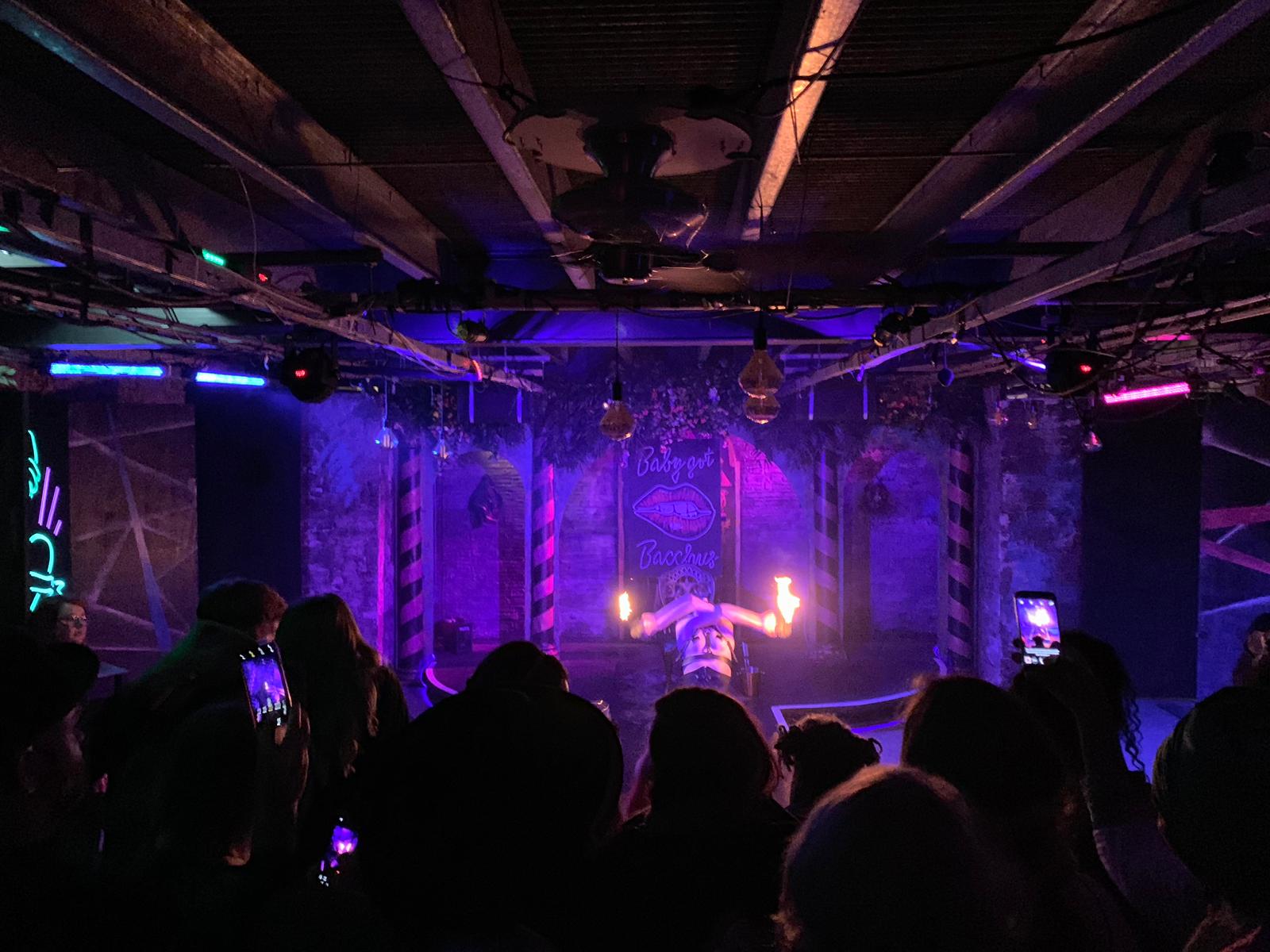 Divine Proportions makes full use of its subterranean space to transport audiences to a fantasy world where we can live out our wildest dreams; with performers fully committed to their roles and bringing the world of Greek gods and goddesses to life, design elements that helped fully immerse us in this mythological wonderland and a good flow that let audiences be entertained every step of the way and nourished with every bite, it’s evident this ‘cohort of cult priestesses’ sure knows how to throw a great party. 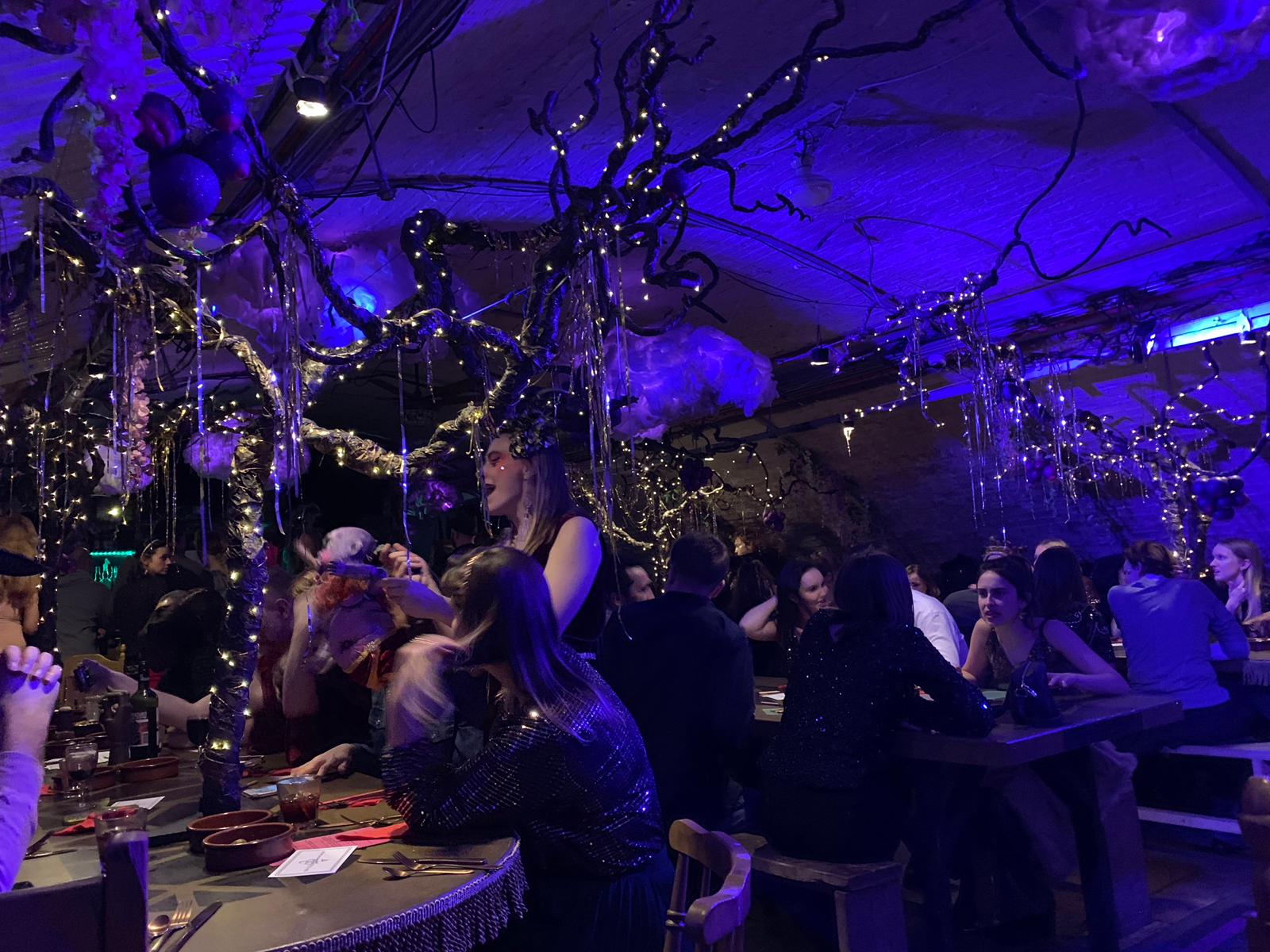 0 comments on “In London’s (Off) West End 2018: Divine Proportions by Shotgun Carousel (Review)”