Western meets Chinese opera in a spectacle to remember.

Inspired by the short story of the same name from Pu Songling’s Strange Tales from a Chinese Studio (Liaozhai Ziyi), the Singapore Chinese Opera adapts Painted Skin for the stage as a 100 minute opera in concert. The classic tale follows a Chinese scholar when he comes across a beautiful woman crying in the rain, giving her an umbrella out of kindness but not realizing she is a demon in disguise. Charmed by the demon, the two kindle a romance while his wife remains at home, tragedy set to befall them all. 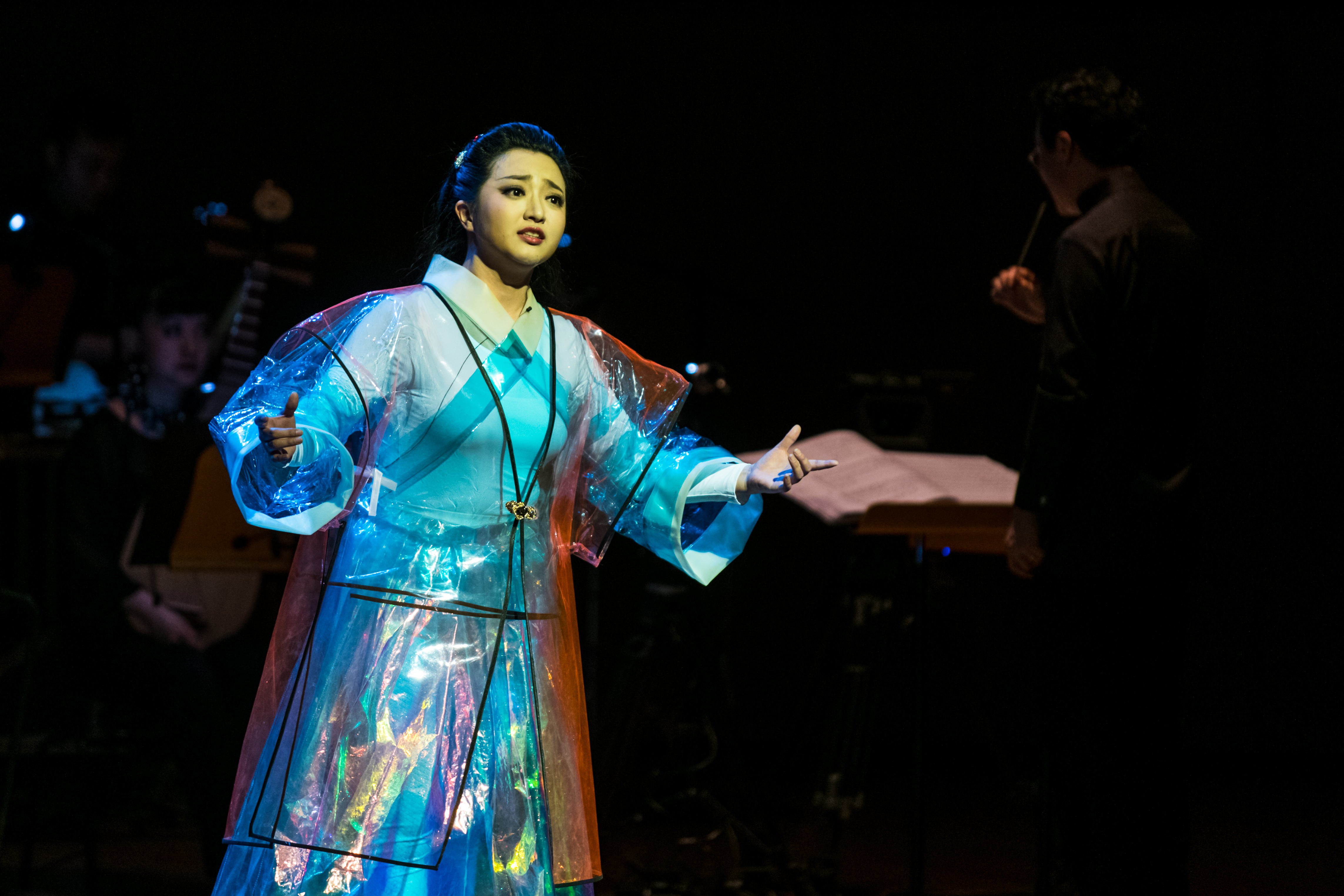 Being a production by the Singapore Chinese Orchestra, the orchestra and conductor Tsung Yeh were first introduced to the audience before the piece began proper. Scripted by Wang Yuanfei, composed by Hao Weiya, directed by Yi Liming and conducted by Tsung Yeh, Painted Skin is first and foremost a sight to behold, with impressive multimedia design incorporated into the show’s backdrop. This is done with performers manipulating various props at the side of the stage, cameras trained on them and projecting it live on a screen above to create the opera’s supernatural atmosphere, as operated by Ruan Xudong, Peng Wenni and Wu Dawei. To create the atmosphere, the performers sprayed water on a piece of glass, the droplets slowly sliding down to give the impression of a rainy day, while water on dry ice created the sense of mist Opening with a spray bottle creating ‘mist’ from dry ice, giving the appearance of rain, fog and an overall eerie atmosphere, a face then appears from beyond the mist, and one feels as if one is being watched throughout the rest of the performance. With the aid of percussion section, particularly the drums, a sense of intrigue and trepidation is created, with Tsung Yeh’s masterful conducting elevating the air of mystery created by the SCO’s intriguing notes. 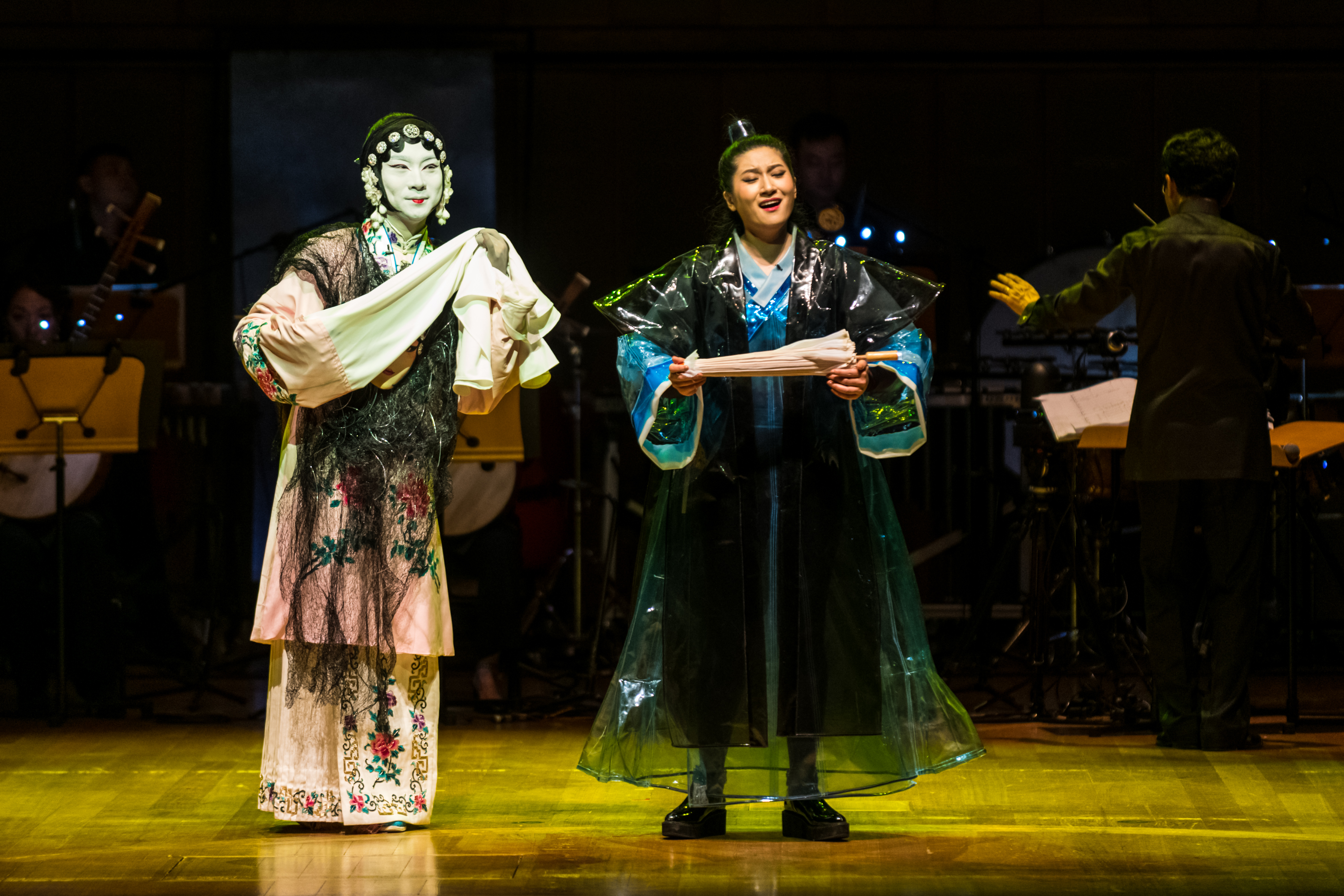 The opera itself then begins with the introduction of mezzo-soprano Dong Fang, playing against gender as the male Scholar Wang. Similarly, Chinese opera-trained male performer Liu Zheng plays the female ghost Gui Yan, and this deliberate ‘miscast’ gender play perhaps bringing out the story’s themes of deceptive appearances. What is particularly noticeable between both performers is their stark contrast in styles and appearances – the costumes they don are avant garde, updated for a contemporary audience, with Scholar Wang dressed in a transparent ‘raincoat’ over a traditional Chinese costume. On the other hand, Gui Yan is dolled up in thick makeup that hides her identity, ghostlike and adding to the theme of appearances acting as a deception to something else underneath. Gui Yan is also dressed in a typical Chinese opera costume with water sleeves and intricate embroidery, and one is impressed by how much detail and hard work goes into preparation for such a role. Liu Zheng is obviously a seasoned performer of Chinese opera, as his character moves according to Chinese opera conventions, gliding across the stage with finesse, as if an actual ghost. Whenever Gui Yan speaks, it feels melodic, clearly enunciated and sounding completely natural, with Liu Zheng having completely embodied the character. 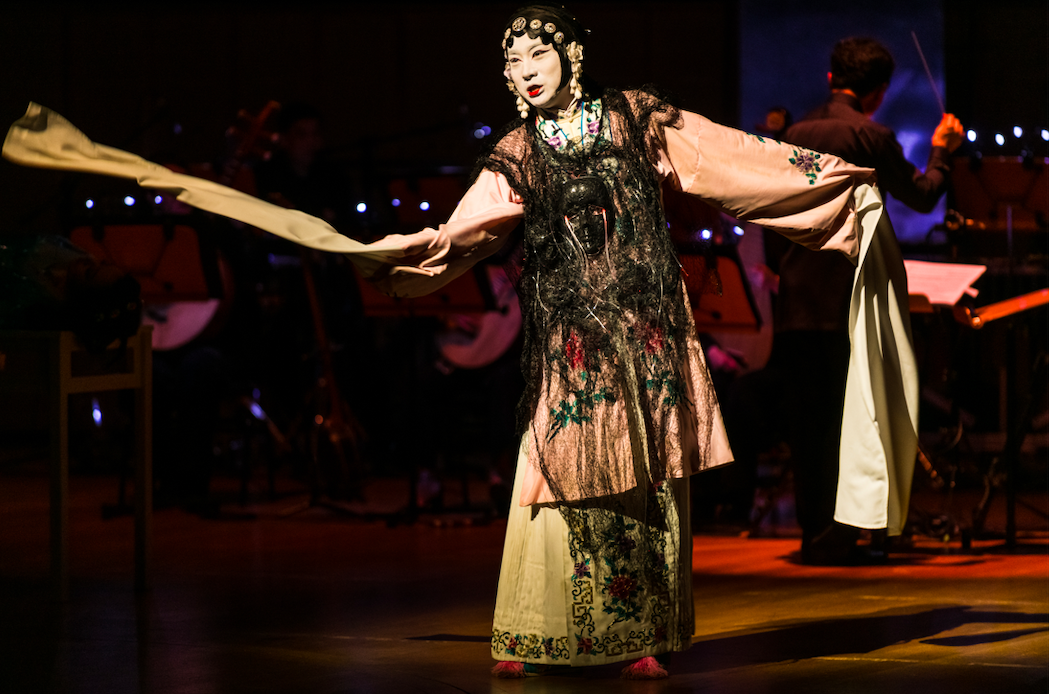 Throughout the performance, there are plenty of moments throughout that anchor the opera emotionally as well. Chemistry between Dong Fang and Li Jing Jing feels real as they talk and explain their feelings to each other, helped by the rousing effect created by the string section, while the love Scholar Wang feels towards the ghost is characterized by music that is far more ethereal in nature. One is occasionally tickled by their interactions too, as Mrs Wang berates Scholar Wang about the mysterious umbrella and his strange behaviour as he tries to avoid the questions, ending with a melodramatic death scene as Mrs Wang falls from a broken heart. The ghost even makes its way into the audience at one point, singing from the stalls and giving the impression that it literally is everywhere, always watching, always present, made more terrifying by Liu Zheng’s skilful handling of each song. 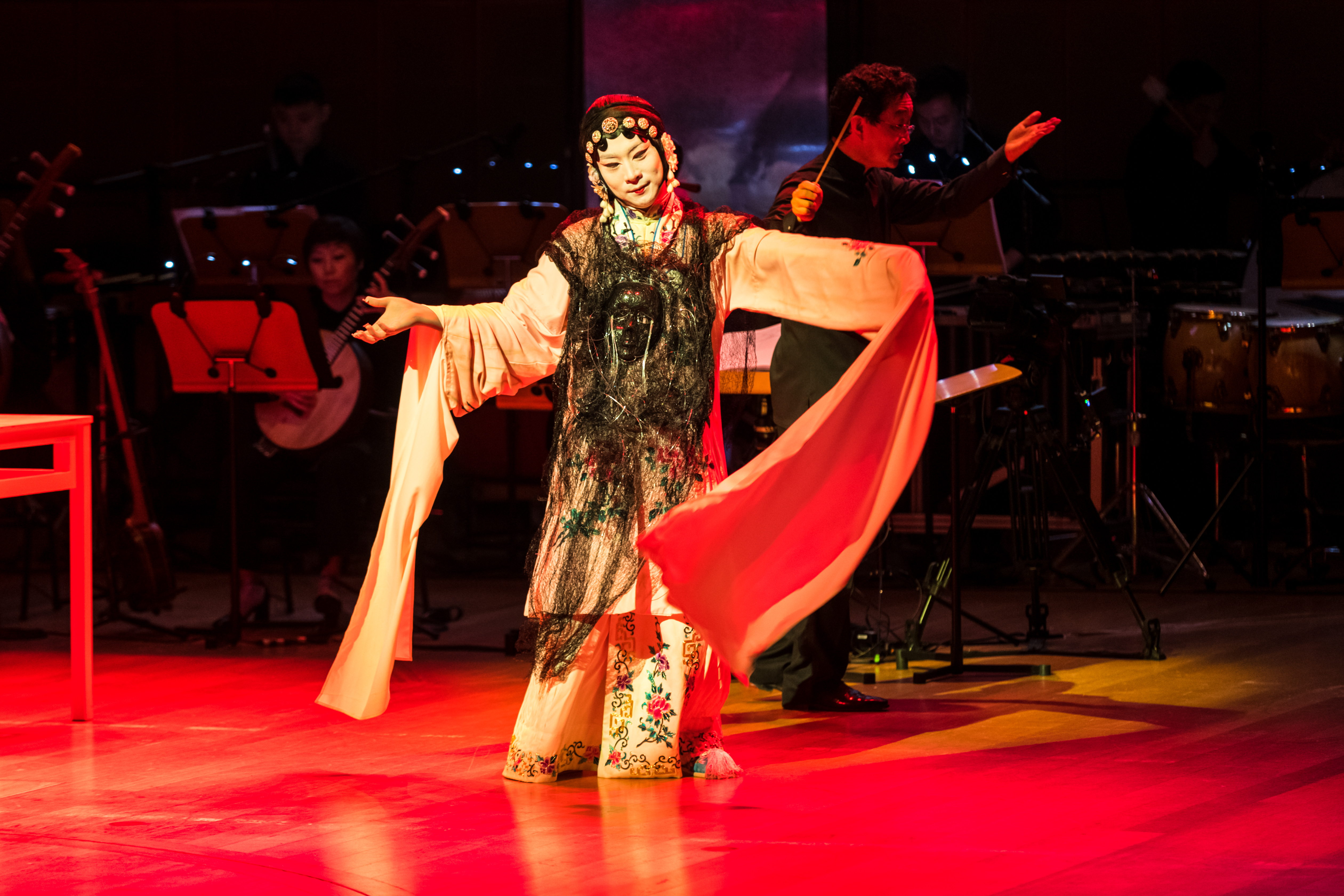 Throughout the remainder of the performance, the eerie atmosphere never lets up, with the projection then showcasing water with dye poured into it, as if infecting and possessing it with something evil. When Li Zheng speaks as Gui Yan, the Chinese opera style singing only adds to the uncanniness of his character, while the eventual reveal that Gui Yan is a demon in disguise pure horror as Mrs Wang (soprano Li Jing Jing) discovers the discarded human face and skin of the ghost. Elements of the original story are also effectively incorporated into the script, such as how the ghost carries with it a distinct fragrance everytime it appears, seemingly permeating all that it touches or comes into contact with. 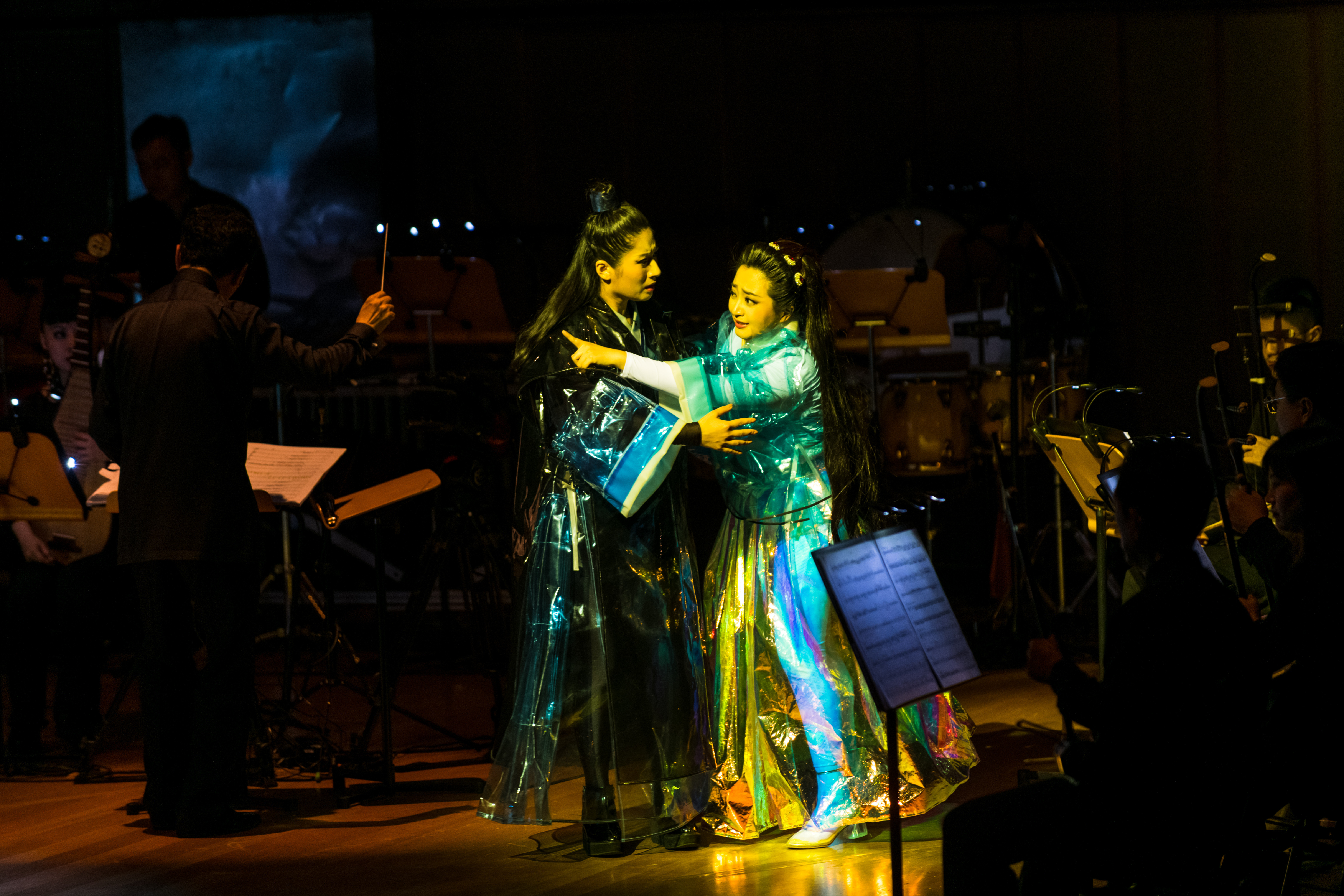 What Painted Skin ultimately is however, is a brilliant subversion of expectations when Gui Yan leaves not via exorcism but of her own accord, as Scholar Wang’s heart proves far too black for her to consume, revealing how humans themselves are guilty of hiding sin that is too dark even for the devils themselves. With Painted Skin, the Singapore Chinese Orchestra has crafted a contemporary operatic spectacle with gorgeous visuals, capable performers, and a rousing score well played by an effective orchestra. If this show is anything to go by, Chinese opera is certainly not dead, and continues to find new ways to impress and wow as technology improves and the tradition is kept alive in contemporary forms.

Painted Skin played on 23rd February 2019 at the Esplanade Concert Hall as part of the Esplanade’s Huayi – Chinese Festival of the Arts.