A fast-paced, sharp comedic take on the lies that build a marriage.

According to playwright Oscar Wilde, “the truth is rarely pure and never simple.” Nowhere does this apply more than Florian Zeller’s contemporary farce The Truth, where the eponymous subject eludes our errant protagonist, finding himself at a greater loss the more he attempts to hide it. Presented by Singapore Repertory Theatre, in a new translation by Christopher Hampton, The Truth then takes us on a fast-paced, twisted rollercoaster of a comedic journey as we attempt to get to the bottom of the affair, far more complicated than it initially lets on.

Directed by London-based Singaporean theatre director Ng Choon Ping in his SRT directorial debut, The Truth centres on Michael (Lim Yu-Beng), a man we are introduced in flangrante delicto, sleeping with his best friend’s wife Alice (Cynthia Lee MacQuarrie). Of course, all of this is under wraps from his teacher wife Lauren (Neo Swee Lin) and Alice’s husband Paul (Vivek Gomber), or at least, so he thinks. It’s only a matter of time before the hastily crafted excuses and reasons fall apart however, and the chaos that follows can only be described only as a complete surprise. 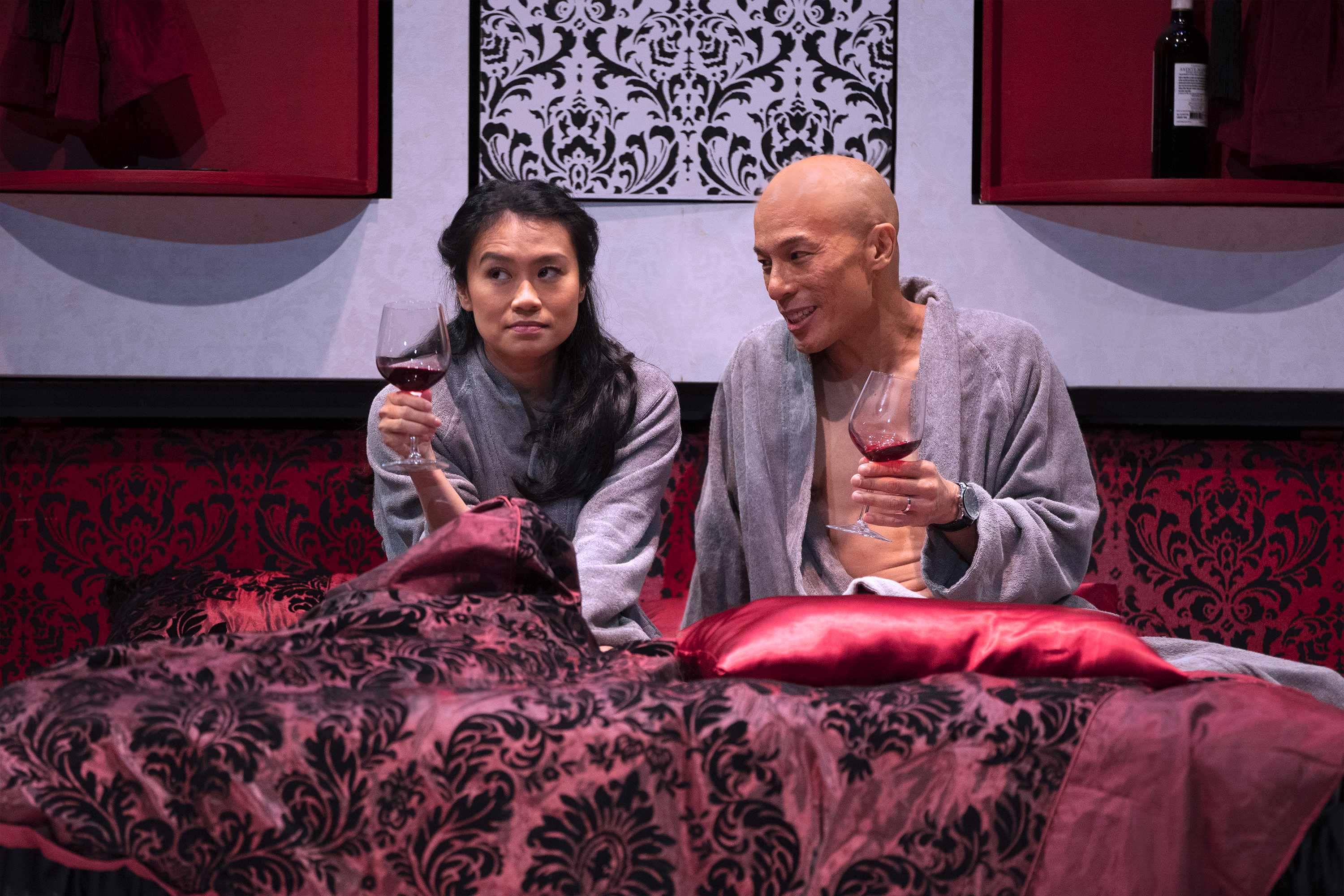 While The Truth is a text-heavy script, comprising solely of duologues in any given scene, Ng Choon Ping has managed to lead the talented cast in capturing most of the punchlines and snappy rhythm of the play to make it a success. Many of the play’s best comedic moments play on jokes with a long-build up, but a satisfactory payoff – every time Michael finds himself caught in a lie, the increasingly deep hole he encounters providing a form of schadenfreude as his alibis are thwarted at every turn. Reminiscent of the rapid-fire humour of a sitcom, one hears a combination of both nervous laughter and hearty guffaws at every turn, revealing perhaps of how unnervingly familiar Michael’s situation is to anyone who’s ever lied by the skin of their teeth. One also appreciates plenty of the visual humour Ng employs in his direction, from the choice to arm Lauren with a a copy of Lee Kuan Yew’s appropriately titled “Hard Truths To Keep Singapore Going”, to Alice’s cheeky alcoholic habits, where she siphons off Michael’s wine when he is not looking (the surprised expression on his face upon seeing his near-empty glass hilarious to see). 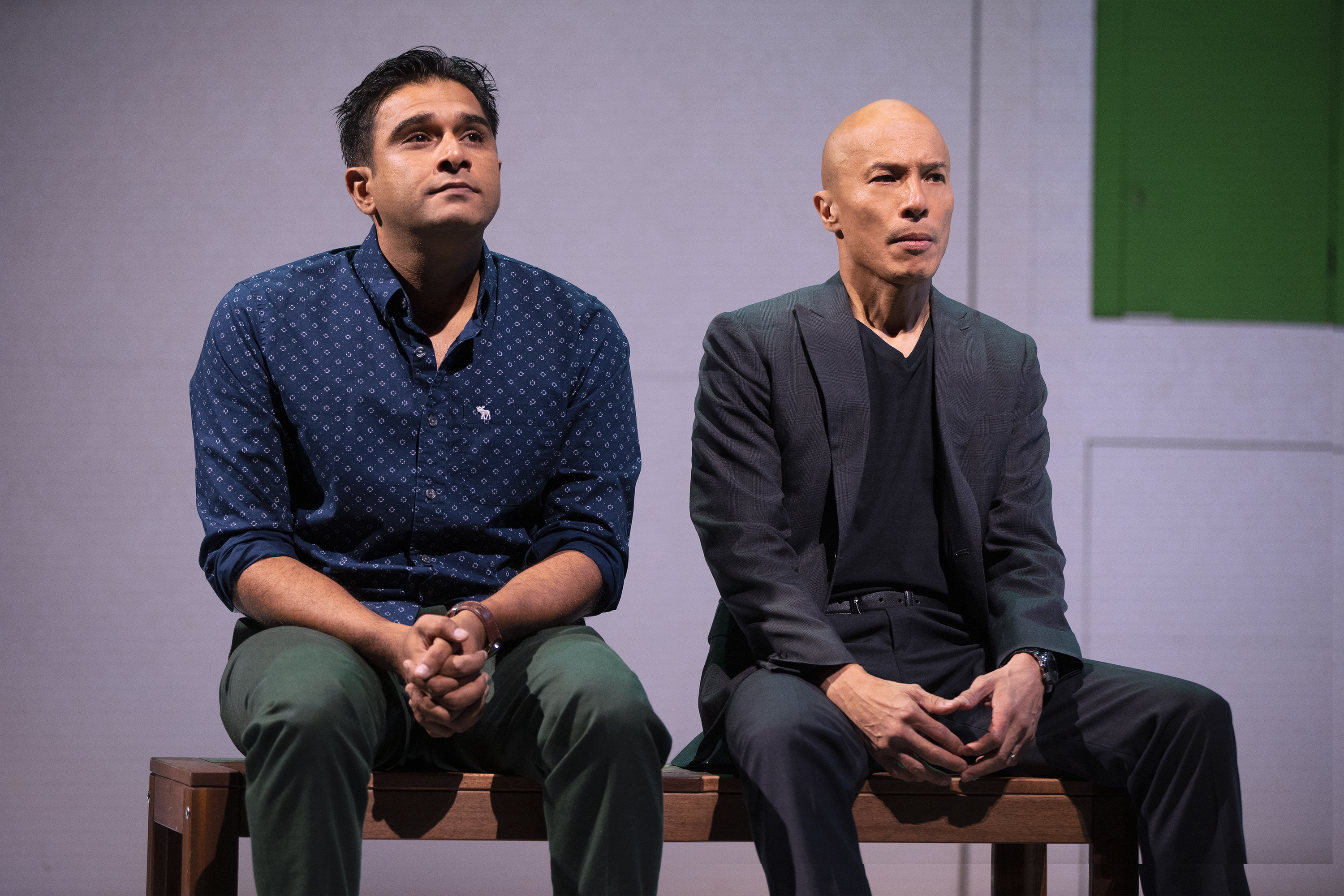 The Truth owes much of its success as well to the stellar delivery from the cast – Cynthia Lee MacQuarrie sells the role as a morally pure, ingenue doctor well, charming us from the moment she is introduced, while Vivek Gomber, as her husband Paul, displays an inscrutable expression when he comes onstage, with audiences unable to tell at all the degree of truth in his words, and nailing his comic timing with perfectly placed beats in his confrontation with Michael. 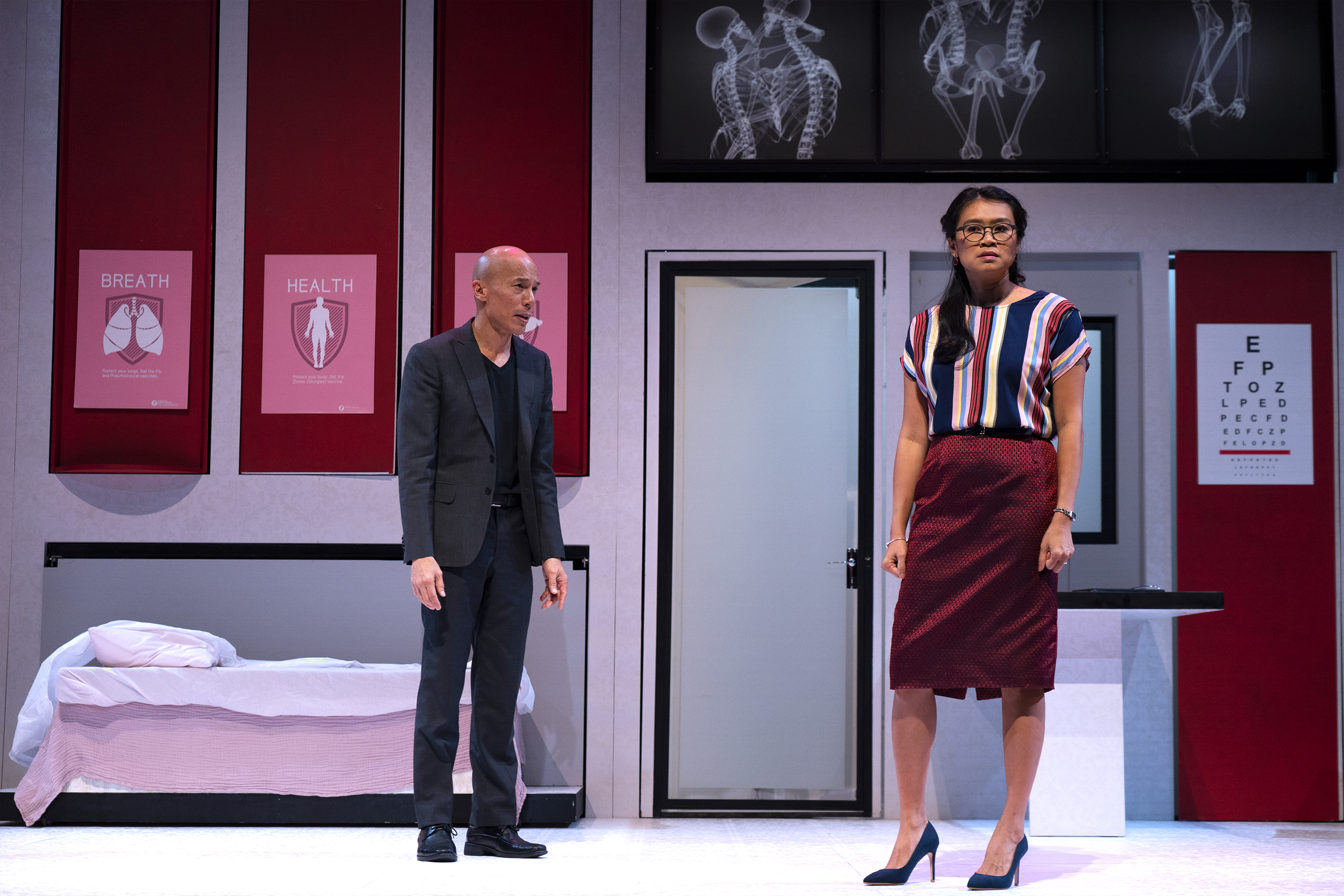 For anyone’s who’s ever been caught up in a lie before, Lim Yu-Beng’s portrayal of Michael is immediately relatable. By far the most difficult role of all, with appearances in each and every scene and therefore the most lines to remember, Yu-Beng nimbly leaps from incredulous, self-righteous man in one minute to guilt-ridden, nervous jitterbug in the next, his almost split personality constantly fascinating to watch and one he plays well. Shifting in and out of these personalities, we are reminded of the challenge of maintaining a solid, consistent story when lying to others, and how difficult it is to keep calm under pressure and the constant bombardment of proofs to combat our ‘truth’. 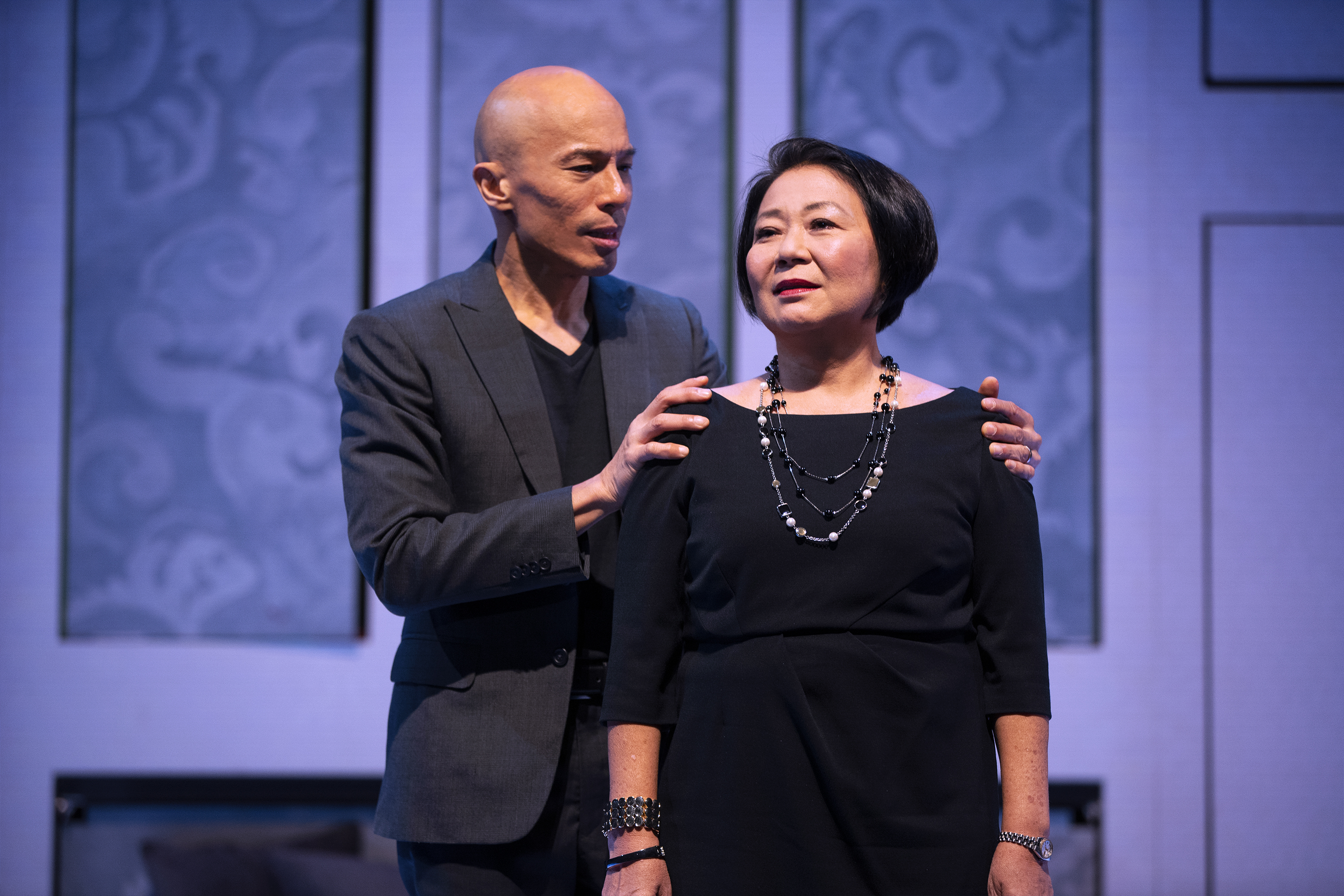 But it is Neo Swee Lin as Michael’s wife Lauren who proved to be the highlight of the night, looking stunning and youthful with sleek black hair and classy outfits from Leonard Augustine Choo. Beyond her energetic glow onstage, her character goes through the biggest emotional arc of all, and Swee Lin captures her seemingly naive, oblivious nature at the play’s beginnings, before delivering her one of her signature devastating breakdowns, her voice cracking with emotion when she argues with Michael, tears flowing from her eyes, proving once again that she no doubt remains one of the finest actresses working in theatre today. 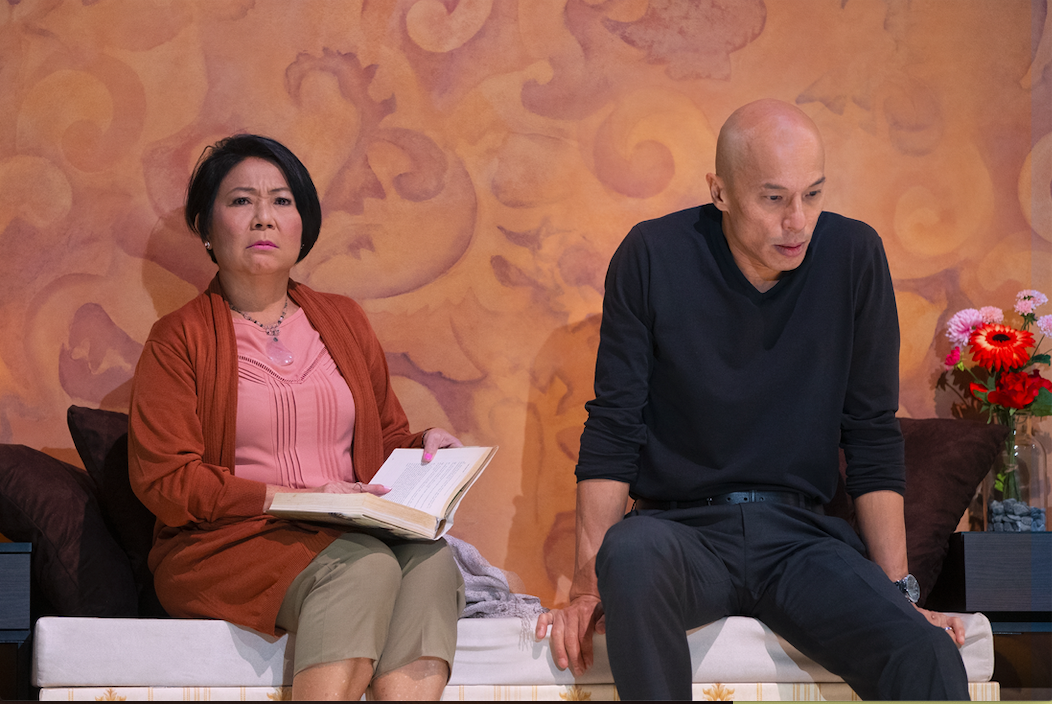 Petrina Dawn Tan continues to surprise us with each production she designs for, with an initially innocuous ‘flat’ white wall that later reveals the many set pieces it contains, reminding us of a pop-up storybook from our childhood days that keeps us excited and anticipating the surprises that await us on every page. We are constantly kept on our toes in every scene – where in one moment a segment may pop out to reveal a queen bed, the next scene catches us unawares when it pulls out to show off a couch instead, much like how the whole truth in the play continues to snake its way out, constantly teasing and only revealing itself only in the very last scene. One also appreciates the little details in every scene change, such as steam emerging from the showers during a locker room scene, or the fact that there is never a total blackout during scene changes, often with one actor still onstage during the transition, to create a sense of continuity throughout and keep up the brisk pace of the play. 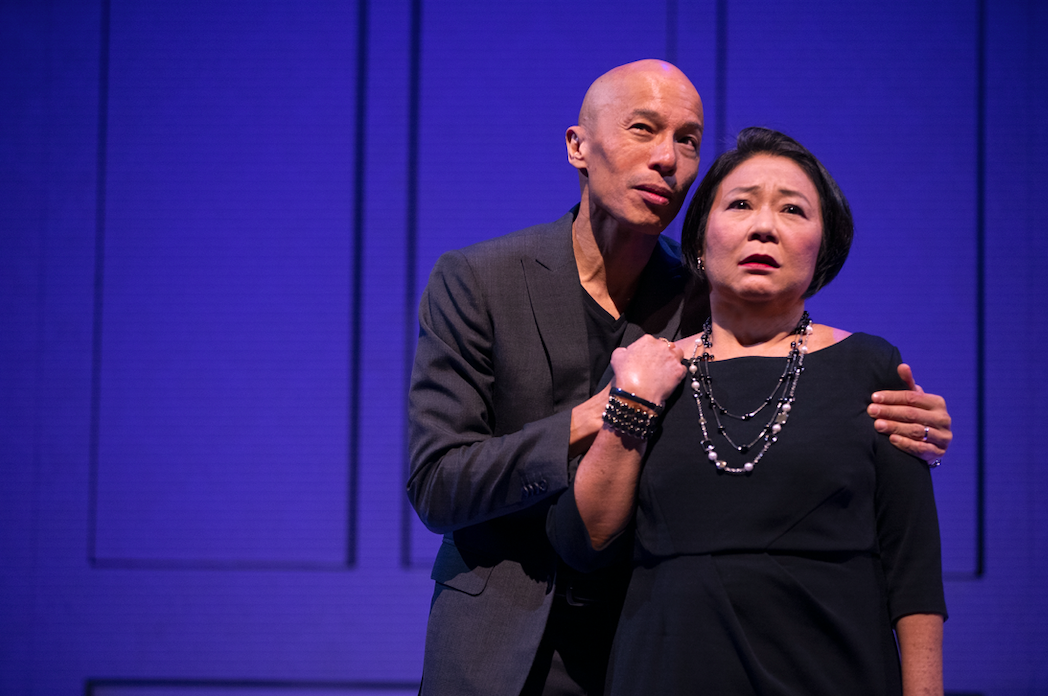 Simply put, the truth about The Truth is that it’s one of those rare contemporary plays that comes with a straightforward but effective linear plot that still manages to keep us on our toes throughout the performance. It’s not often you get to see this kind of show in our local theatre scene, bringing out both the hard hitting drama and humour in spades. Unburdened by extraneous details or an overcomplicated plot, The Truth knows exactly what it wants to do, and uses sharp observational and situational humour to evoke laughter in the theatre, yet leave us all with a lingering uncertainty in knowing that all lies eventually come unravelled. With its capable cast and functional but high production value, The Truth is a play you’ll want to catch this season, unabashedly bringing to light everything wrong with modern relationships in one wildly entertaining night, sure to spark conversation, leave a message that reverberates through the hearts of each and every audience member, and provoke plenty of laughs that leave us thinking about the cost and value of voicing the truth.

The Truth plays at the KC Arts Centre from 3rd to 20th April 2019. Tickets available from SISTIC

3 comments on “Review: The Truth by Singapore Repertory Theatre”