The late Maestro Peng Xiuwen is often considered one of the father figures of contemporary Chinese music, having established Chinese orchestra music as a key genre all across the globe before he passed in 1996. As part of their 2019 season, local Chinese chamber orchestra Ding Yi Music Company is set to pay tribute to Maestro Peng with a brand new, full length concert this April. 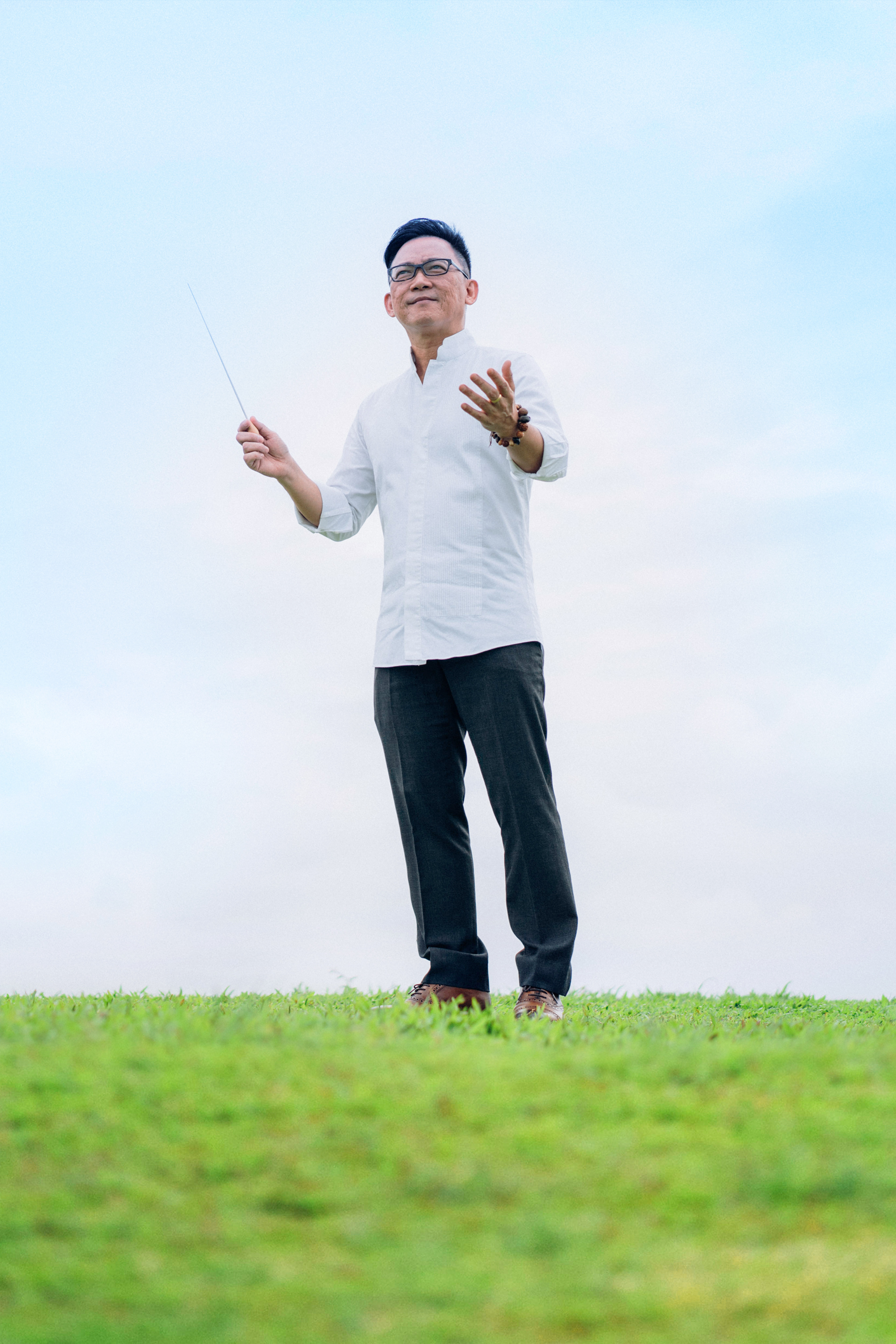 Speaking to Ding Yi Principal Conductor Quek Ling Kiong, the concert conductor explains: “Maintaining an orchestra, it’s really all about balance, sometimes doing your own artistic vision and at others, doing things that get you the sponsors. So last year’s Gu Guan Ren concert was actually the start of this Masterpieces series focusing on composers, because a sponsor met composer Gu and was very impressed by the performance he saw. Peng Xiuwen came up in conversation, and we thought it would be good in terms of education and outreach to the public.”

“Maestro Peng is a true master, the godfather of the Chinese music scene,” he continues. “He’s written and arranged over 400 pieces, and even became a leader of the first full time Chinese orchestra in China at the age of 24. He’s one of the first people to really build a symphonic orchestra based off the Western model, grouping the various instruments together, and focused on a way that tuned that instruments to perfection and really improve to the point where the sound was just right. He was one of the first people to arrange Western compositions from Flaubert, Slavinsky, Mozart and more for Chinese orchestra, and really brought Chinese orchestra music to international attention and what it was capable of.” 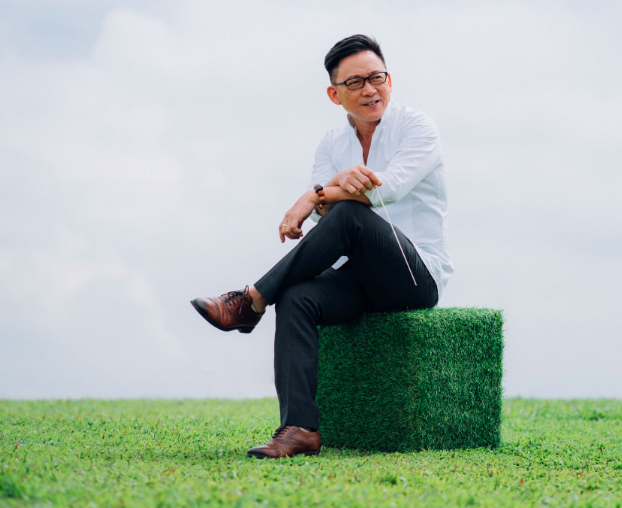 Titled Masterpieces by Peng Xiuwen《乐坛巨人》, the one hour concert will feature compositions by Maestro Peng such as Terra-cotta Warriors《秦兵马俑》, Harvest Drums 《丰收锣鼓》and Unyielding Su Wu 《不屈的苏武》, as well as The Surging of Messy Clouds《乱云飞》and The Rising Moon《月儿高》, as arranged by Maestro Peng. Quek explains: “Honestly, he’s as important as Mozart within the Chinese orchestra world, but there’s this lack of publicity for him. That’s why we wanted to hold this concert and position him correctly in the eyes of local audiences. His work is still being played, it’s accessible, and sounds contemporary. There’s always such a challenge of bringing in new audiences to Chinese orchestra, compared to Western classical music. I don’t have a solution, but it’s a matter of being more open, having more conversation and learning how to make the industry work by innovating and keeping up with the times to ensure its survival.” 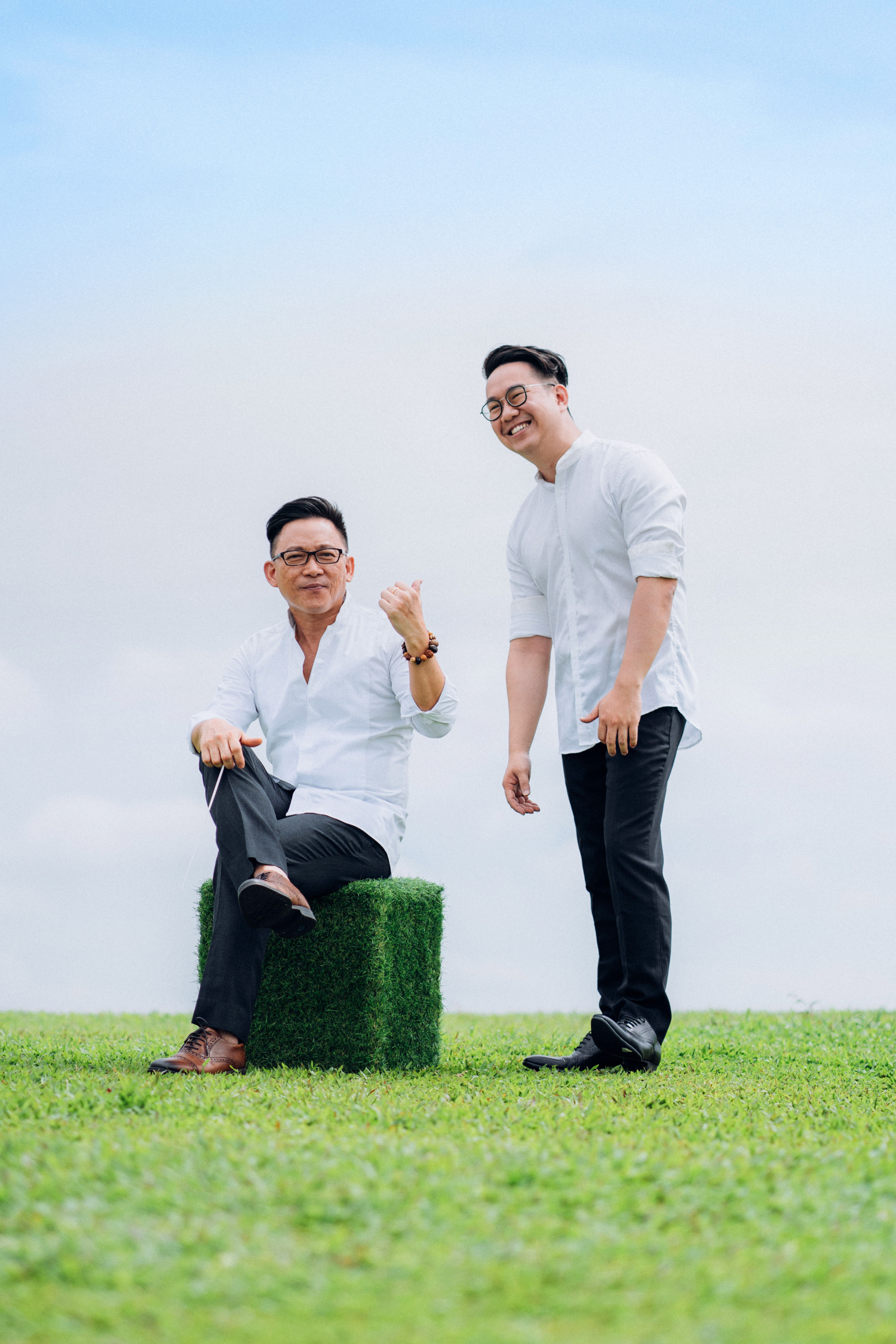 Education is a key aspect of Ding Yi’s ethos, which will be one of the aims of the concert as well. Says Mr Quek: “During the concert, we’ll be introducing each piece to help audiences better understand and appreciate each number. I want to grow our audience, more locally and internationally. I want the audience members to be excited by what we have to show. We’ve got guest performers yangqin master Zhang Gao Xiang and his wife huqin virtuoso Jiang Ke Mei, as well as huqin player Xu Wen Jing, all of whom worked under Maestro Peng at some point, and we’ll even be playing off (photocopied) scores handwritten by Maestro Peng himself.”

Sidetracking a bit, we discuss Ding Yi’s origins, and the challenges of working as a chamber orchestra, especially with Mr Quek’s new position as Ding Yi’s Principal Conductor. Says Mr Quek: “Ding Yi started out just as a group of NAFA music grads coming together, wanting to play on even after graduating when not making a living teaching. I wasn’t available to lead them at first, but I knew most of them, and when they approached me again some time later, I was struck by them when one said ‘if not us, then who is gonna do it’, a mantra I personally believed in too. There’s a real challenge in sustaining an arts group, but I believed that they were willing and able to do it.” 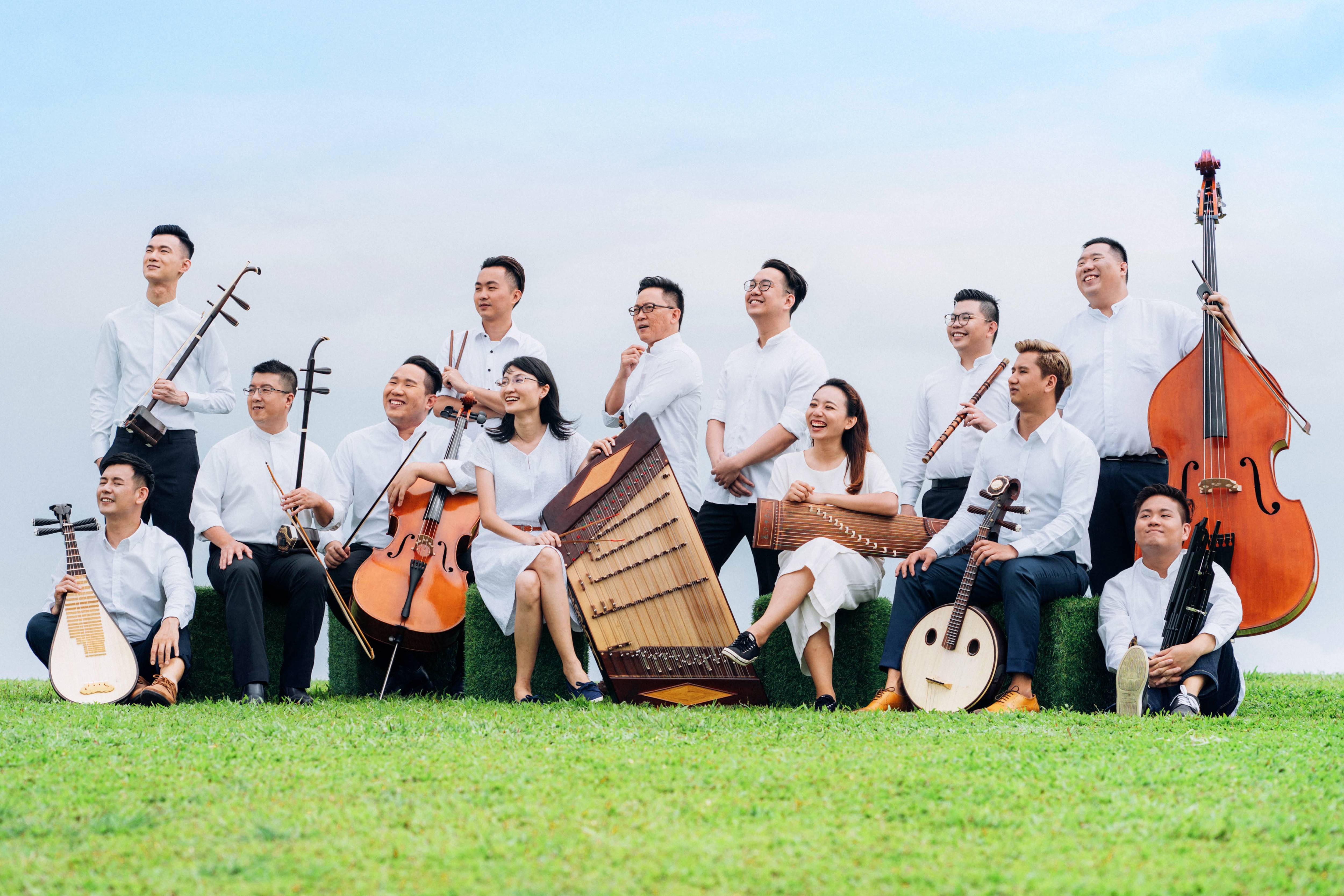 Mr Quek thinks back to his own start in Chinese Orchestra, and how his training style is set to change things up for Ding Yi: “In my younger days, Chinese Orchestra training was really tough. As a leader, I’ve been doing my best to learn how best to train and mentor them better, and cut out some of that tough love I grew up with. I was in Dunman High under Dr Tay Teow Kiat. I joined the orchestra because I had some experience already in primary school, but rehearsals were so strict and so tough, I started to get nightmares going for training an being told everything I was doing was wrong, that I almost started to hate the art. I constantly remind myself that I cannot impart the same thing to my students, and maintain standards while ensuring that they’re not completely turned off by the training.”

“A lot of members are part timers with limited rehearsal schedules. Everyone has their part to play and cannot be covered by another musician, especially in such a small ensemble,” he adds. “A lot of the time it’s about working out our issues and learning to accept the limitations. We may not be as ‘corporate’ as a full orchestra, but we do still maintain high standards of tone, timing and make it work in our own way. In my style, I challenge them by introducing new composers, new pieces, some that do get really avant garde. I take a look at what works and what doesn’t, and there’s really no point to forcing a musician to play something they’re so resistant to, and really, it’s all a matter of growth. There must be a balance between sustainability and artistic vision, and we’re not so strict with musical direction that we have to stick to a specific genre or composer all the time.” 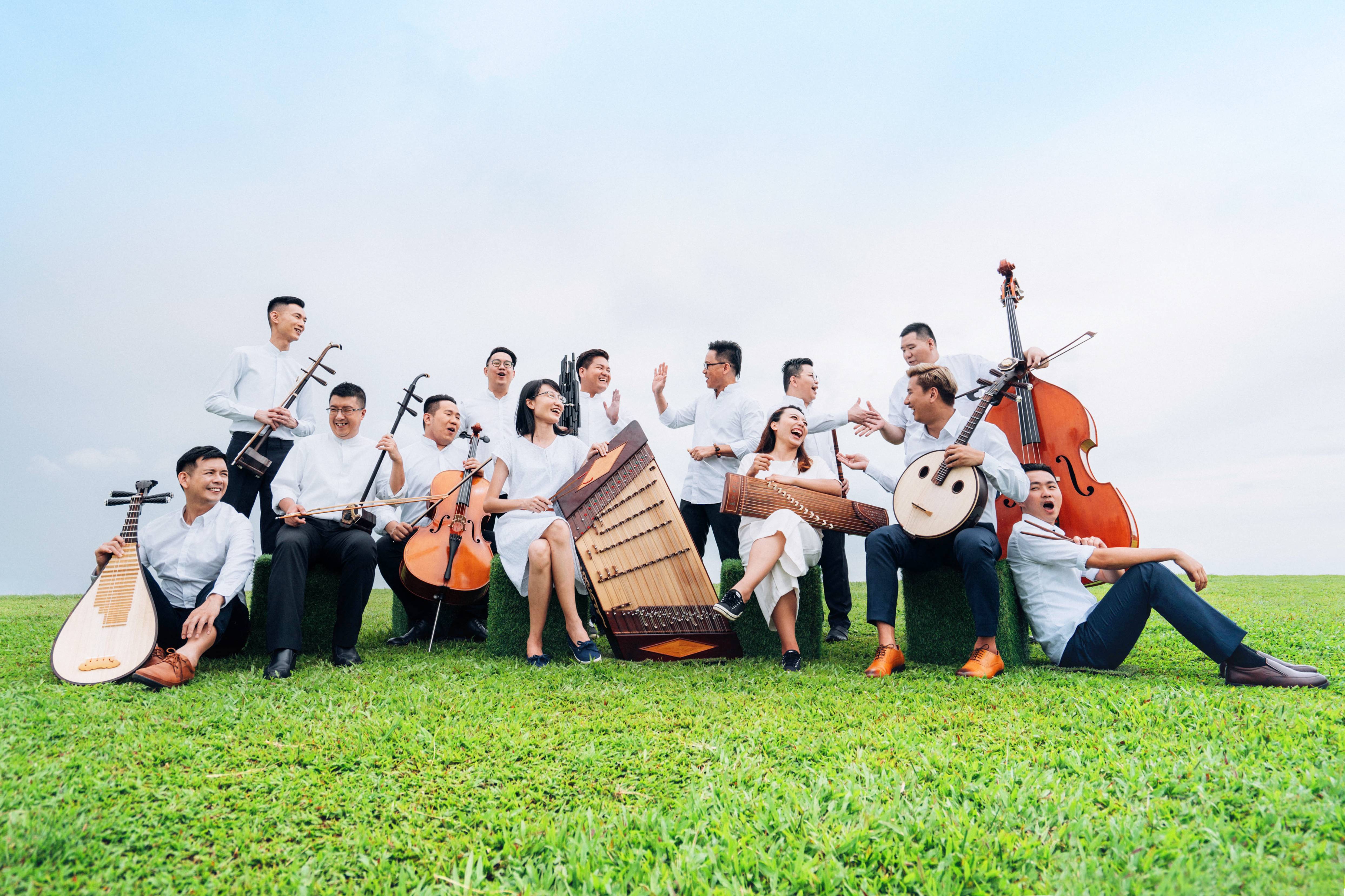 Not only will Mr Quek be conducting; he’ll also be performing a drum solo during Harvest Drums 《丰收锣鼓》, a rare chance to see the conductor in musical action, promising a concert unlike any other, making both fans and curious newcomers certain to fall in love with the seminal composer’s works and understand the reverence the world has for him. Mr Quek concludes: “Masterpieces by Peng Xiuwen will be the furthest thing from a ‘boring’ concert that you’ll be experiencing. There will be stories, fresh renditions of a classic repertoire, we’ve got his daughter to write an excerpt about her father and we’re still figuring out what’s going into the encore. This concert is really all about understanding the man and what he’s done for the Chinese orchestra culture, and how his vision has shaped the scene today, in all that we do.”