With over 400 compositions and arrangements to his name, it’s nigh impossible to choose the very best pieces to represent the late Maestro Peng Xiuwen in a 2 hour concert. For Ding Yi Music Company’s Masterpieces by Peng Xiuwen 《乐坛巨人》, it just takes the eight pieces chosen to convince us of the master’s skill and the impact he left behind on the Chinese Orchestra world, educating audiences about the master with the musicality of these songs that see Western influence on Chinese Orchestra, and a series of videos between songs depicting musicians having worked with Maestro Peng personally.

Held at the Singapore Conference Hall, the concert opened with Harvest Drums, with Ding Yi principal conductor Quek Ling Kiong taking to the stage in a rare appearance not just as conductor, but also as percussion lead. Dressed in a shimmering white vest, conductor Quek started off the concert on a high note as he pounded on the drums, as if summoning the sounds of the orchestra to join him. They do, and what follows in the percussion-driven piece is a high energy showcase of drumming, gongs, and cymbals crashing and rumbling to highlight the power of percussions resonating through the hall. It’s remarkable to watch conductor Quek seethe with energy as he beats down on the drums, similar to his conducting style, which we see later on during the rest of the concert. Listening to this song, one can imagine the joy and glory of villagers reaping the spoils of their harvest, as they roam the fields and crops.

In Dance of the Yao Tribe, there is a keen sense of the romantic as the string-driven piece moves at a fast pace, gracefully leaping from note to note, section to section as if young girls were dancing about the field, while the plucked strings come through to represent the males coming to court them. There is a youthfulness about this piece that brings joy to us as the music surges and the two sections come together to represent courtship and love, intensifying to fever pitch where we are only left to imagine the aftermath of such a ritual. This was followed by Ah Xi Dancing Under The Moon, featuring Zhang Gao Xiang on the yangqin. The frenetic melody of this piece moved it along quickly, and one can sense the happiness emanating from the Ah Xi people as they clap, skip and jump around a bonfire, a quick tempo that always keeps the mood up and audiences alert.

The piece de resistance of the first half however, came with the Unyielding Su Wu, comprising three movements depicting the patriotic Su Wu as he is exiled after a failed diplomatic mission, allowed to return only after 19 years. Featuring Xu Wen Jing on the zhonghu, her playing comes to represent the voice of Su Wu, aching with pain and suffering as he wanders through the stormy blizzard. This was one of our favourite pieces of the entire concert, appropriately grand and setting up for an epic song as the entire orchestra weeps with Su Wu; one can practically hear the frigid winds sweep up as Su Wu laments his fate, with Xu Wen Jing’s playing adding a dose of femininity to the male Su Wu’s voice, adding a softness and vulnerability to this man enduring one hardship after another. By the time we reach the third movement, in which he returns at last to his hometown, there is a satisfactory sense of triumph that we feel as the orchestra breaks into song, segueing into relief and joy as he is finally done with his ordeals. Wen Jing’s playing here still leads the orchestra, uplifted from depression into pure ecstasy in her incredible solos, and the song, as a whole, leaves the audience floored with its composition and pitch perfect delivery.

Following the intermission, we opened with The Surging of Messy Clouds, an excerpt from Peking opera Mount Dujuan rearranged as a folk orchestral piece. One can hear each of the instruments act as different voices, a strong sense of rhythm as they sing, with Jian Ke Mei on the jinghu in particular standing out with the intensity with which she plucks and plays, completely focused on her performance while the orchestra supports her. This was followed by A Beautiful Traditional Chinese Girl, rearranged from a Northeast China folk song that sees Ke Mei’s banhu solo taking on a lively pace and tone, taking audiences on a journey from the innocence of a young girl to the bold, flirtatious and unbridled energy of adolescence.

In The Rising Moon, Ding Yi dedicated the piece to the late pianist Elaine Wu, and the orchestra no doubt did her proud with this lengthy number. One of the darker pieces in the programme, The Rising Moon sees the orchestra create atmosphere with the various instruments, and one can imagine seeing a dark, misty night created by the orchestra and a moon on the rise, our view of it waxing and waning as the piece continues on. Featuring Chua Yew Kok on the pipa, we feel a tidal shift as the moon moves through the sky, the pace and rhythm of the piece ebbing and flowing along with the movements, hypnotic in the way it plays out.

In the final number of the programme, Ding Yi played Terra-cotta Warriors, an epic, 20+ minute piece imagining the Qin dynasty and expanding on how the terra-cotta army was metaphorical to the unity of the entire nation. Starting off epic, rumbling and setting us up for a long piece, this is the piece that conductor Quek became completely absorbed in, his movements precise, direct, and big, emphasising every emotion that comes out of the number. We feel the rise and fall of China, we imagine the suffering of people under Emperor Qin’s rule, and we think about the momentary joy of uniting the nation under one banner, and in all, is a fitting end to the programme with how ambitious, how utterly united and how much team effort is required to make this piece a resounding success, going from folk to orchestral, like the rise of China from a group of disparate groups to a united whole.

Returning for not one but three encores, watching and listening to Ding Yi play Maestro Peng’s works makes us realise just how revolutionary this man was, the arrangements sounding Chinese yet distinctly Western in the way the instruments are separated into sections, certainly with hints from some of the Western masters in the melodies and arrangements. The works are tightly composed, and as we watch musicians who personally worked with Peng speak fondly of him, recalling the way he conducted, interacted and created, we know with certainty that his reverence is warranted, and absolutely deserves the title as one of the fathers of modern Chinese Orchestra. 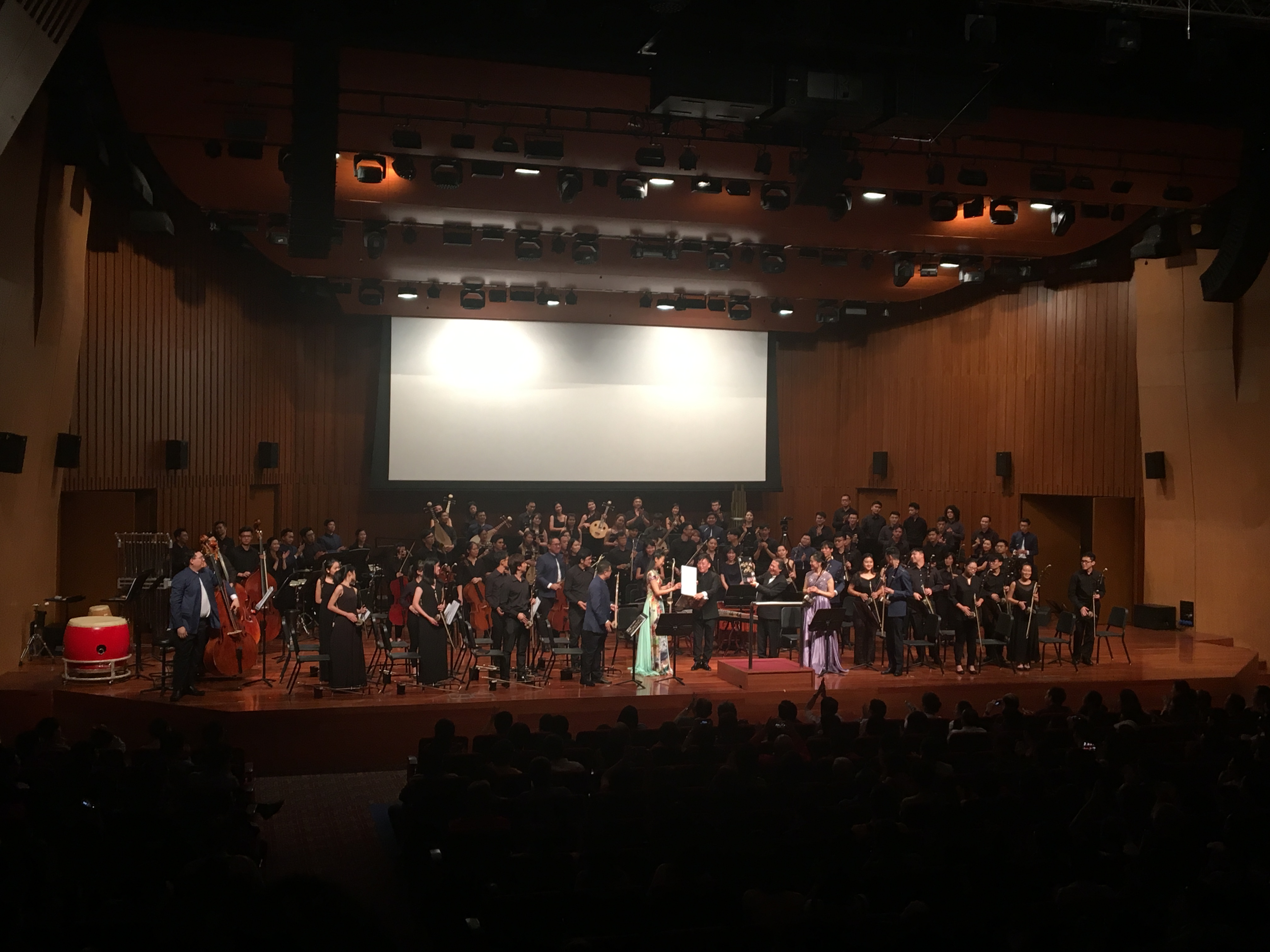