Red herring is the catch of the day in this deep dive into childhood trauma.

As technology continues to develop year on year, it seems inevitable that various facets of the arts wind up attempting to incorporate them into new works, pushing the limits of what one can experience with each production, to varying degrees of success. With curious directive’s Frogman, it is Virtual Reality (VR) technology that takes centrestage in this fringe-style work, used to immerse us in both our protagonist’s memories and an underwater investigation as we unravel the mystery behind the disappearance of a 13-year old girl in 1995.

Taking the form of a police procedural, audience members are introduced to the world of Frogman by being cast as members of a ‘jury’ while we witness Meera (Annabel Betts), a coral reef scientist who is called in for questioning by a police officer when new evidence is uncovered to throw suspicion on her father for the murder of her childhood friend, Ashleigh Richardson, more than 20 years later. The play then periodically shifts between live performance and VR, where each time we put on our headsets, we get a glimpse into Meera’s childhood and an underwater search as the truth slowly comes to light. 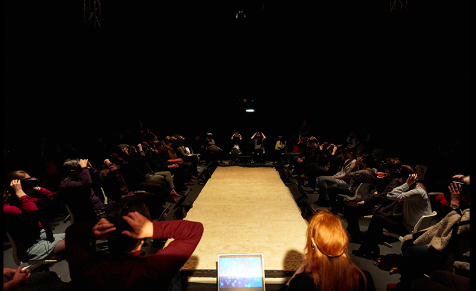 As much as the technology is marketed as one of the biggest highlights, Frogman never quite manages to integrate its VR properly into its narrative proper, and the audience’s role as members of a jury feels tacked on as an easy way of explaining the use of VR, rather than truly involving us in the story or giving a proper reason for our presence. Seated on 360 degree stationary swivel chairs, we are allowed to look all around us while immersed in Meera’s memories, but it is frustrating is that such immersion does not feel as if it adds much more to the performance than if it played on a video. Ultimately, the VR technology felt more jarring than cohesive, adding little to the narrative and winding up extraneous rather than integral to the show.

Within a play, it is still always story that trumps technology though, and Frogman had all the makings of a play with plenty of potential. Annabel Betts, as the sole live actor, delivers an emotional performance as Meera as her traumatic memories are dredged up one by one. While Frogman’s plot meanders for the most part, there was hope in that it still managed to occasionally tug on our heartstrings as we watch an unlikely friendship that develops over the performance. But a sudden, unexpected shift into the supernatural and newly unearthed facts crammed into the final moments end up overwhelming the story with unnecessary details, drowning out its intended themes of adolescence and loss.

What Frogman then comes to represent is the possibilities that VR offers theatremakers. While it contains a number of good ideas, yet still missing a strong case or narrative thread to string them all together. The greatest takeaway from watching this performance is how theatre that utilises new technology must be made with the intention to bring theatre to a new level, rather than for the sake of it, lest they risk crafting a work lauded only for its ‘boldness’ at best and disjointedness at worst.

Frogman runs from 21st to 26th May 2019 at the SOTA Studio Theatre. Tickets are sold out.