Bangkok Getaway: A Once In A Lifetime Experience At Asia’s No.1 Restaurant – Gaggan

BANGKOK, THAILAND – There’s good reason why Chef Gaggan Anand is so renowned within the restaurant world. Emerging at the top of the Asia’s 50 Best Restaurants List for four years in a row (2015-2018), and ranked at No.7 worldwide, the two Michelin-starred restaurant Gaggan in Bangkok singlehandedly transformed the face of contemporary Indian cuisine, a legendary establishment that oozes with style, pizzazz, and attitude, wowing the countless diners who’ve snagged a chance to walk through its doors. Not to mention, shooting to fame after being featured in the hit Netflix series Chef’s Table. 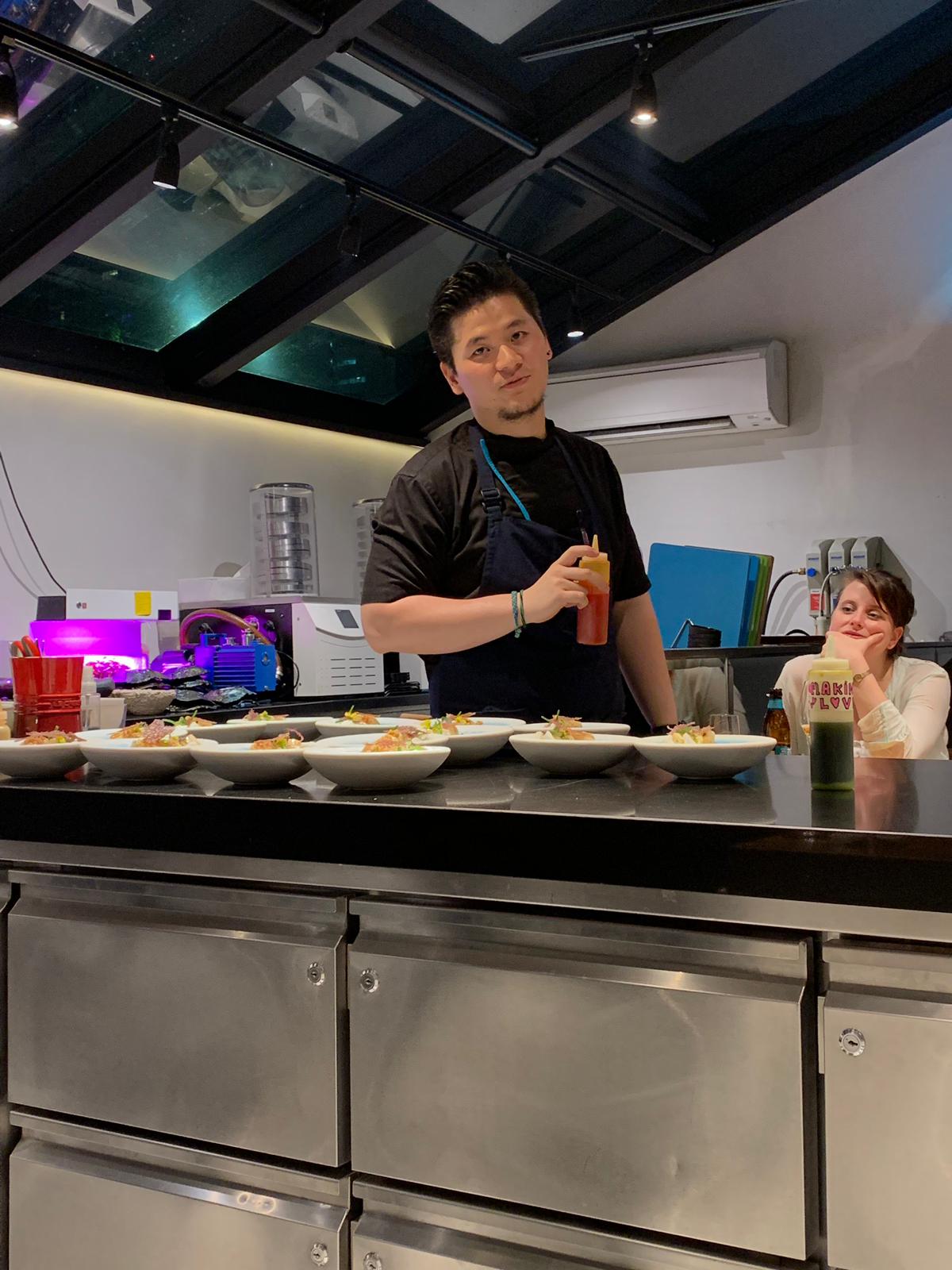 But Chef Gaggan himself is an artist, and it won’t be long before Gaggan closes in Bangkok come 2020. This certainly doesn’t mean that the legendary chef is stopping anytime soon though, with plans to open a new restaurant in Fukuoka, Japan come 2021 with Japanese chef Takeshi Fukuyama of La Maison de la Nature Goh. Knowing this, I knew I had to head down for a taste of his incredible food before the establishment shuts for good. 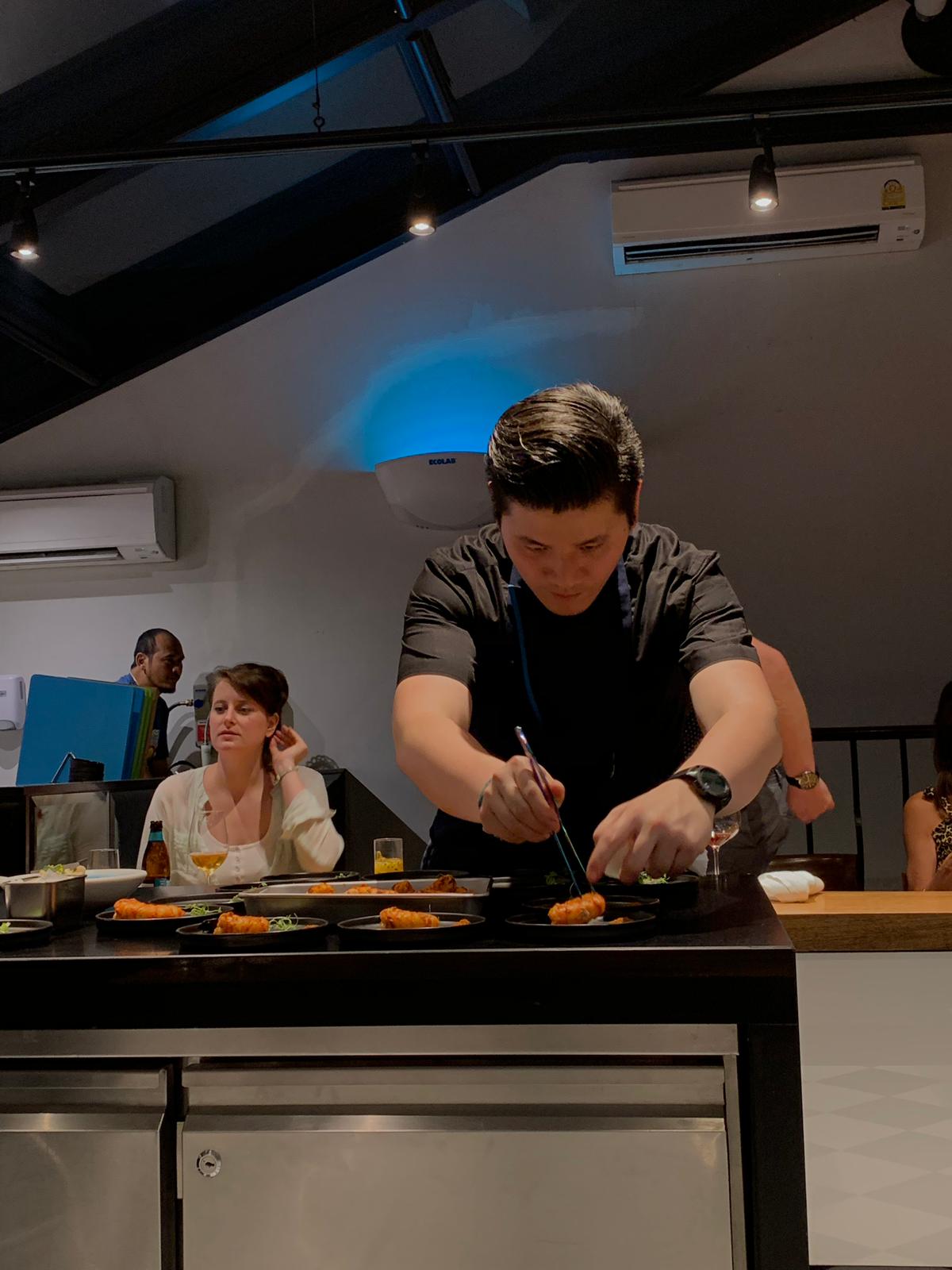 Stepping out of my cab, I arrived at the pristine white facade of Gaggan. The well-trained, friendly front of house staff came straight to my alighting point and ushered me in, setting the tone from first contact for an evening of luxurious and friendly hospitality. Seating me at the chef’s table, the restaurant was at full house today, for a total of 14  guests seated at the small table. Known for its ingenuity and innovation in the culinary field, we learnt about Gaggan’s ‘The Lab’, an initiative started two and a half years ago where the team would do research and development on dishes, experimenting and creating new dishes or reinventing existing dishes to revamp the constantly changing menu from time to time. 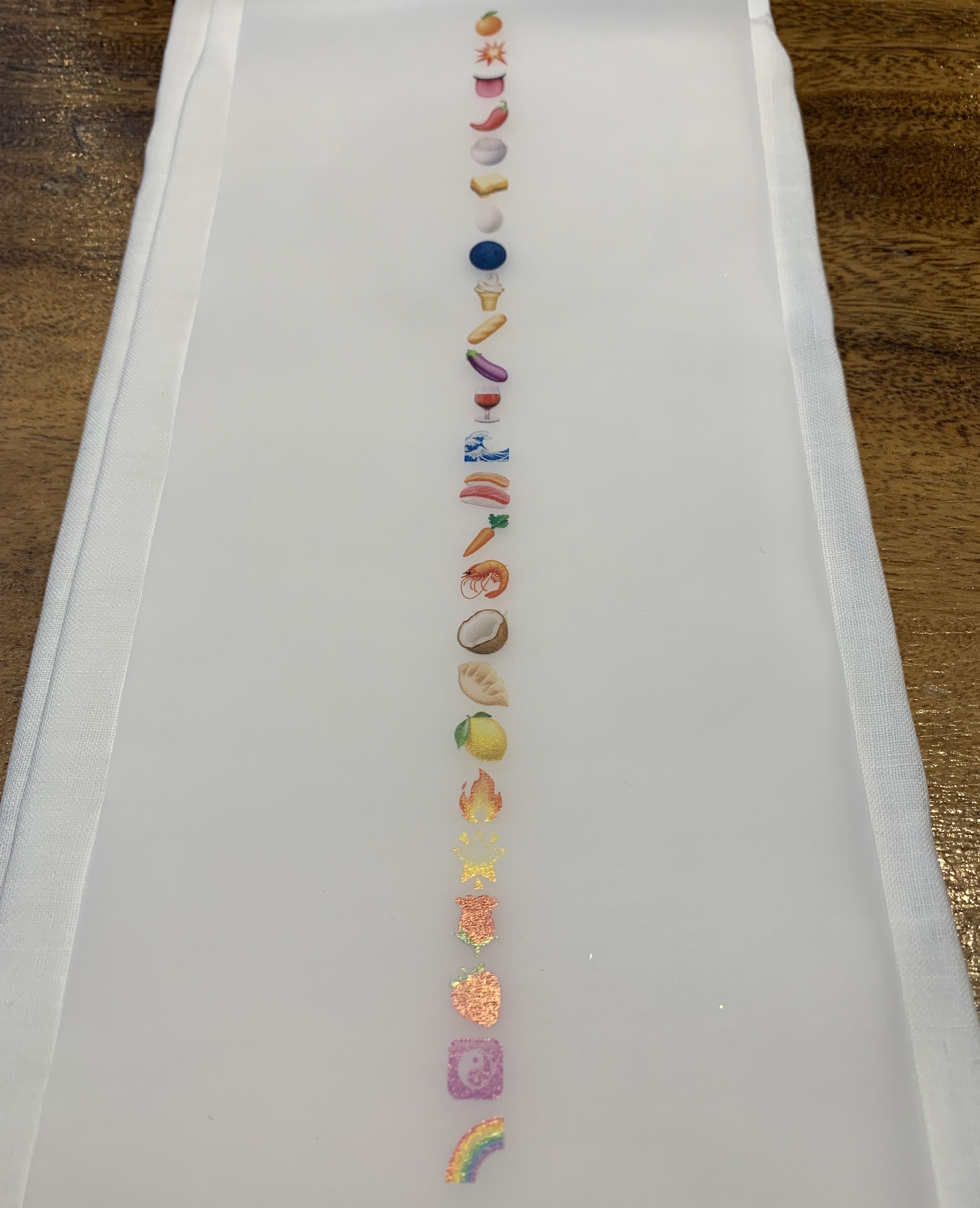 After being introduced to head sommelier Vladimir Kojic introducing the extensive drinks menu to me, I asked for a recommendation on what I should start with and ended up choosing a sake as it was a warm day, and the cold and crisp sake cut through the heat, helping to carve out the beginning of a wonderful evening. Tonight, I was being taken care of Gaggan’s Head Chef Rydo Anton, who introduced me to the 25-course winter menu, with each dish represented by an emoji. I had no idea what I was in for, save for the hint that each emoji offered, and was curious and excited to begin this gastronomic journey. 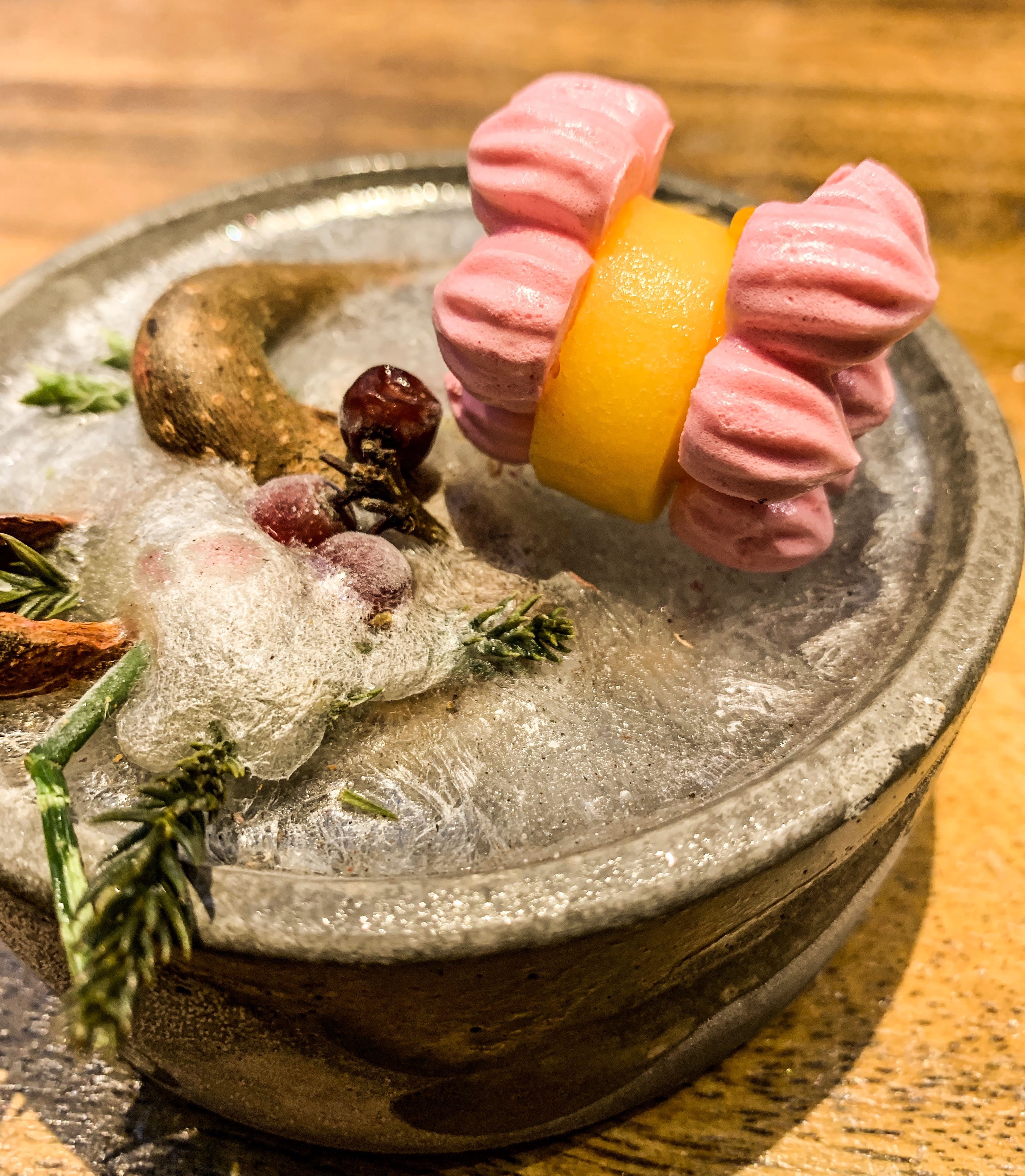 My meal opened with a shiso leaf and orange sorbet,, a fresh, chill appetizer that illuminated and refreshed our tastebuds, readying them for the explosion of flavours still to come. cleans the mouth, gives you an insatiable appetite for whats to come. opens the taste buds. 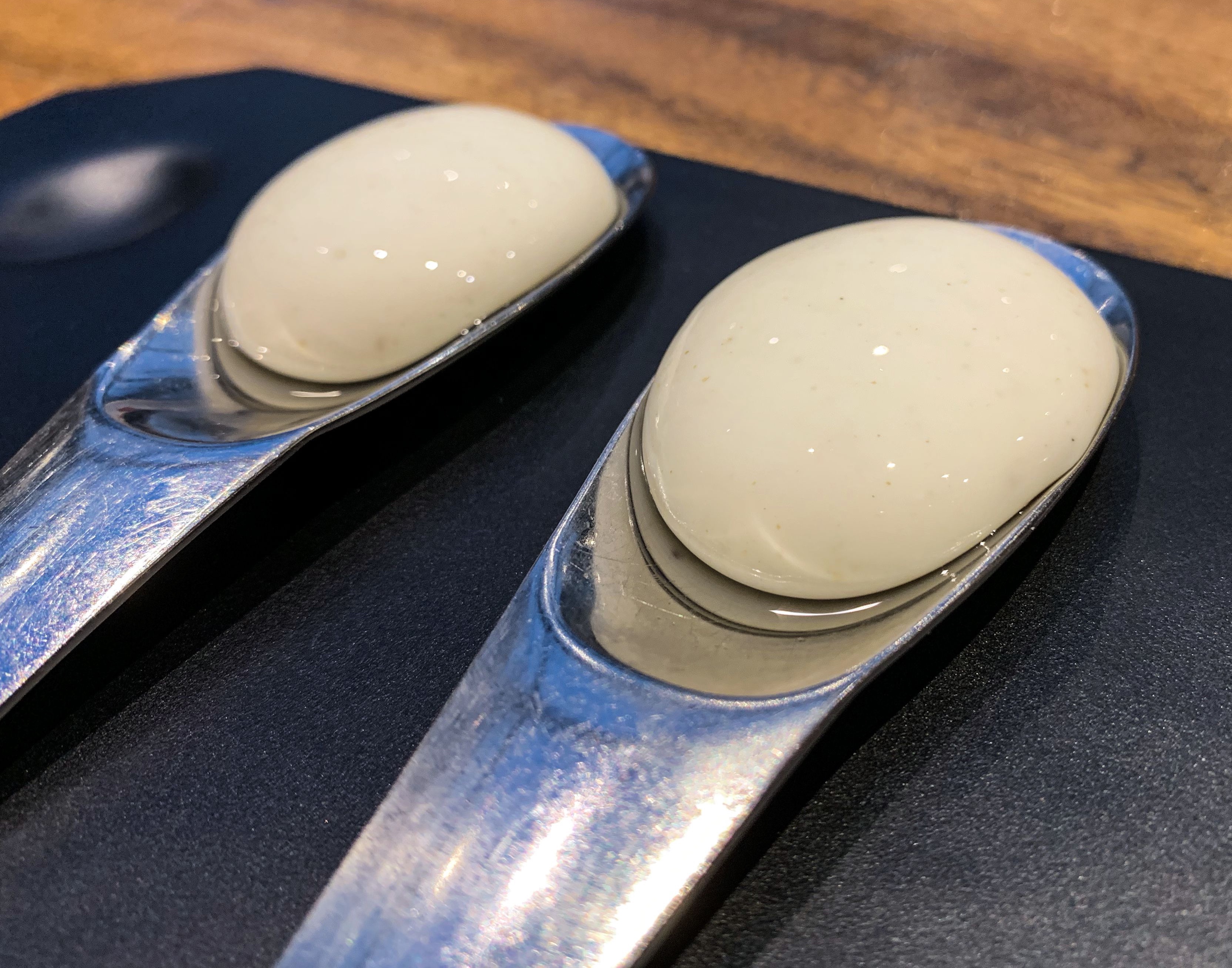 The meal then proceeded with a yoghurt and chai dish, a bite that released a burst of flavours that suggested and introduced me to the medley of progressive Indian flavours we would experience throughout the night. While not the first time we’ve seen a dish like this, it certainly boded well for a fascinating, innovative dinner for the rest of the night. 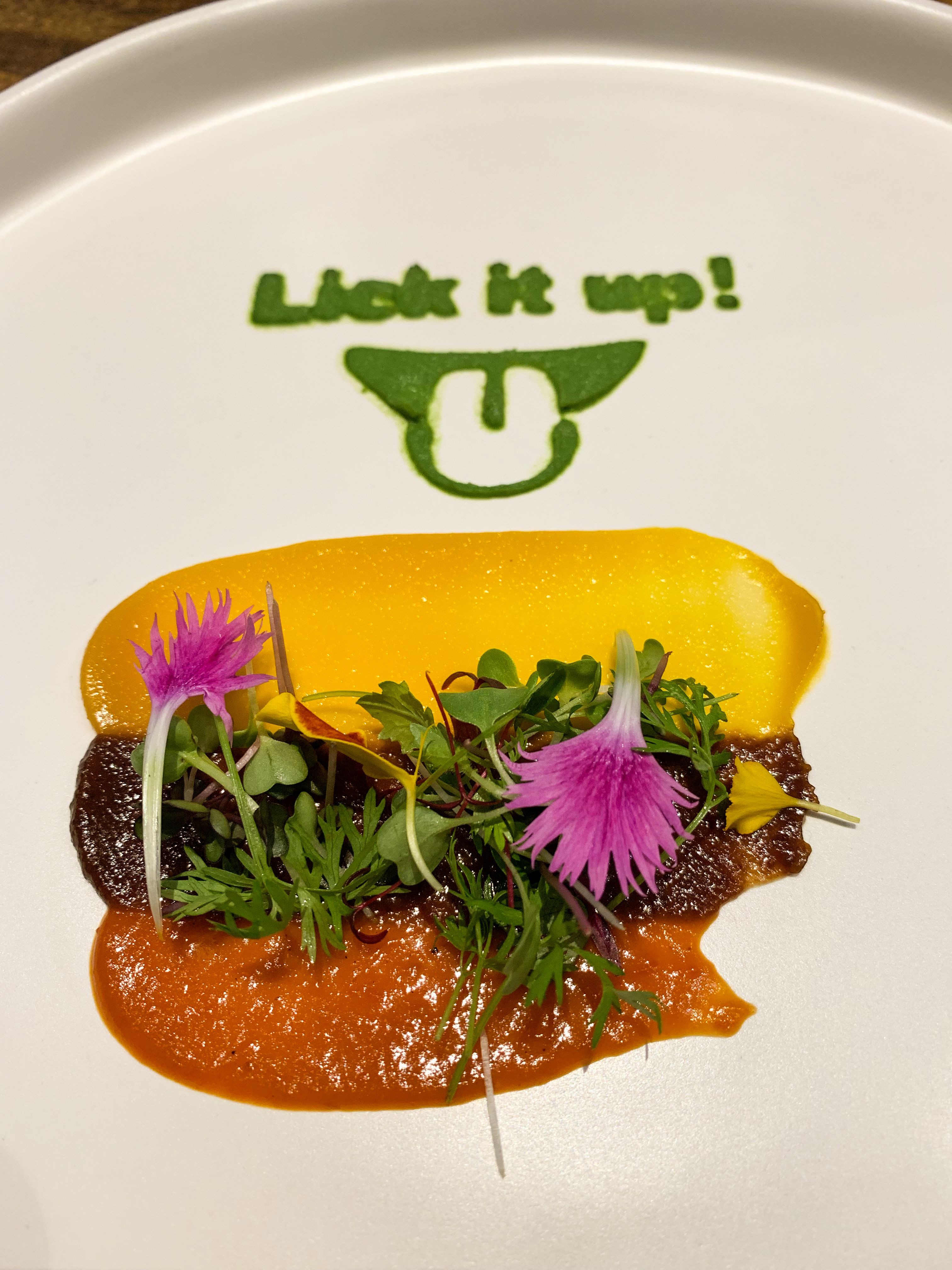 Highlighting Gaggan’s playful attitude towards food, I was then served a cheeky salad called ‘Lick It Up’. Quite literally, with the instruction etched on the plate in green herb sauce. Doing as I was told, we tasted the three different chutneys, each with their own distinct flavour profile, from chilli to yuzu, and strong robust taste of the herbs in a single lick. Certainly, this was a fun course for everyone, who all decided to enjoy it in their own way. 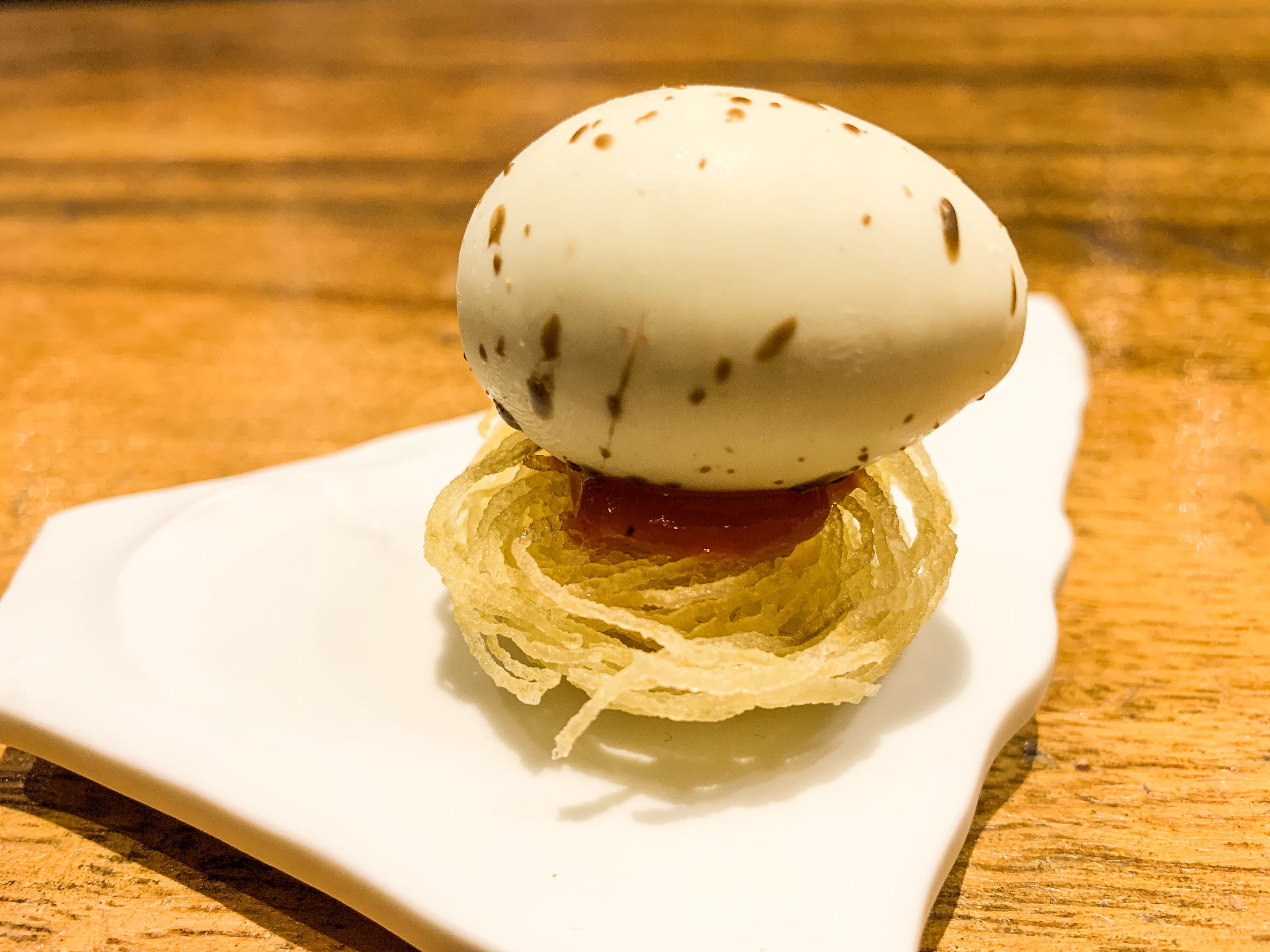 Next up, I had the potato basket – Gaggan’s unique take on the Indian pani puri. The supposed ‘egg’ you see is actually made of a white chocolate shell, with tamarind water. Combining the tangy, savoury taste of the tamarind with the sweet white chocolate doesn’t sound like a good match, yet it works surprisingly well, and I can still taste it now just by thinking of this dish. 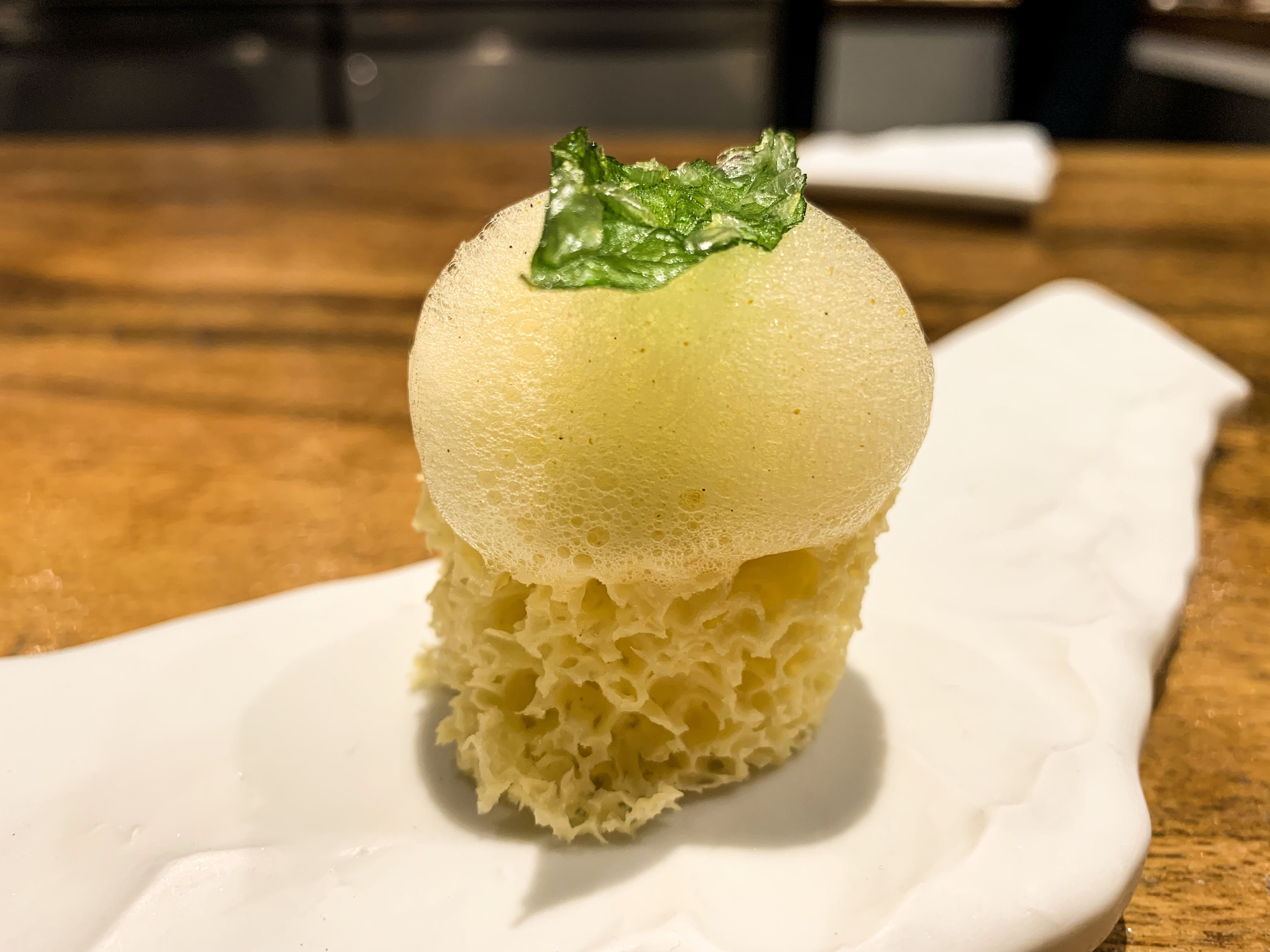 Next up, I had Gaggan’s interpretation of the idli, where all the elements of a typical Indian breakfast were compressed and collected in this small but punchy dish, bringing back plenty of memories of India with a single bite. 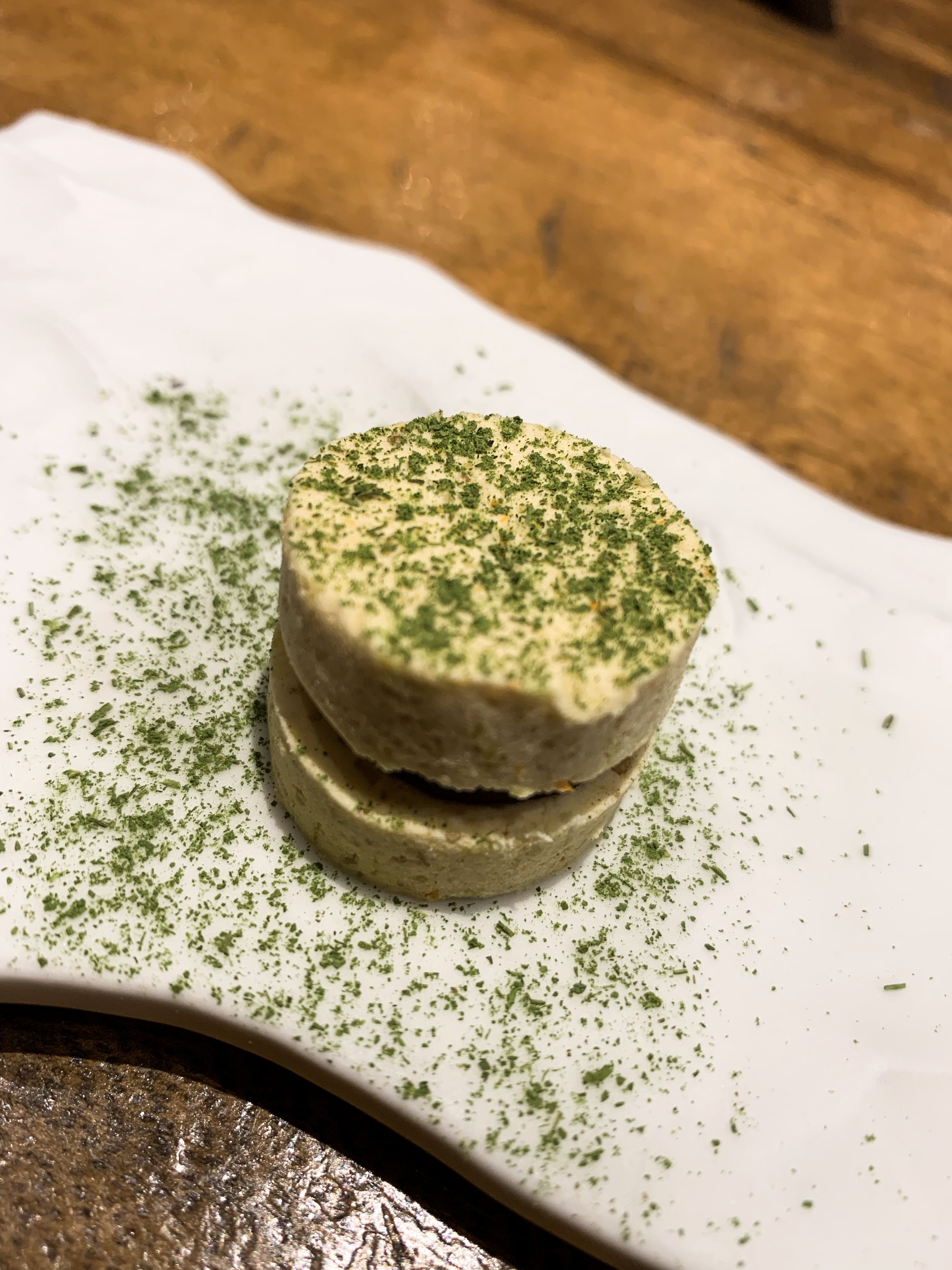 For Gaggan’s dal puri, the dish was created without an egg, and in fact, comprised a compressed, freeze-dried tomato, with tamarind chutney sandwiched in between each layer. I didn’t expect so much flavour packed into this, and it was incredible how the Lab’s technology and R&D has managed to make this something of a flavour bomb in your mouth. 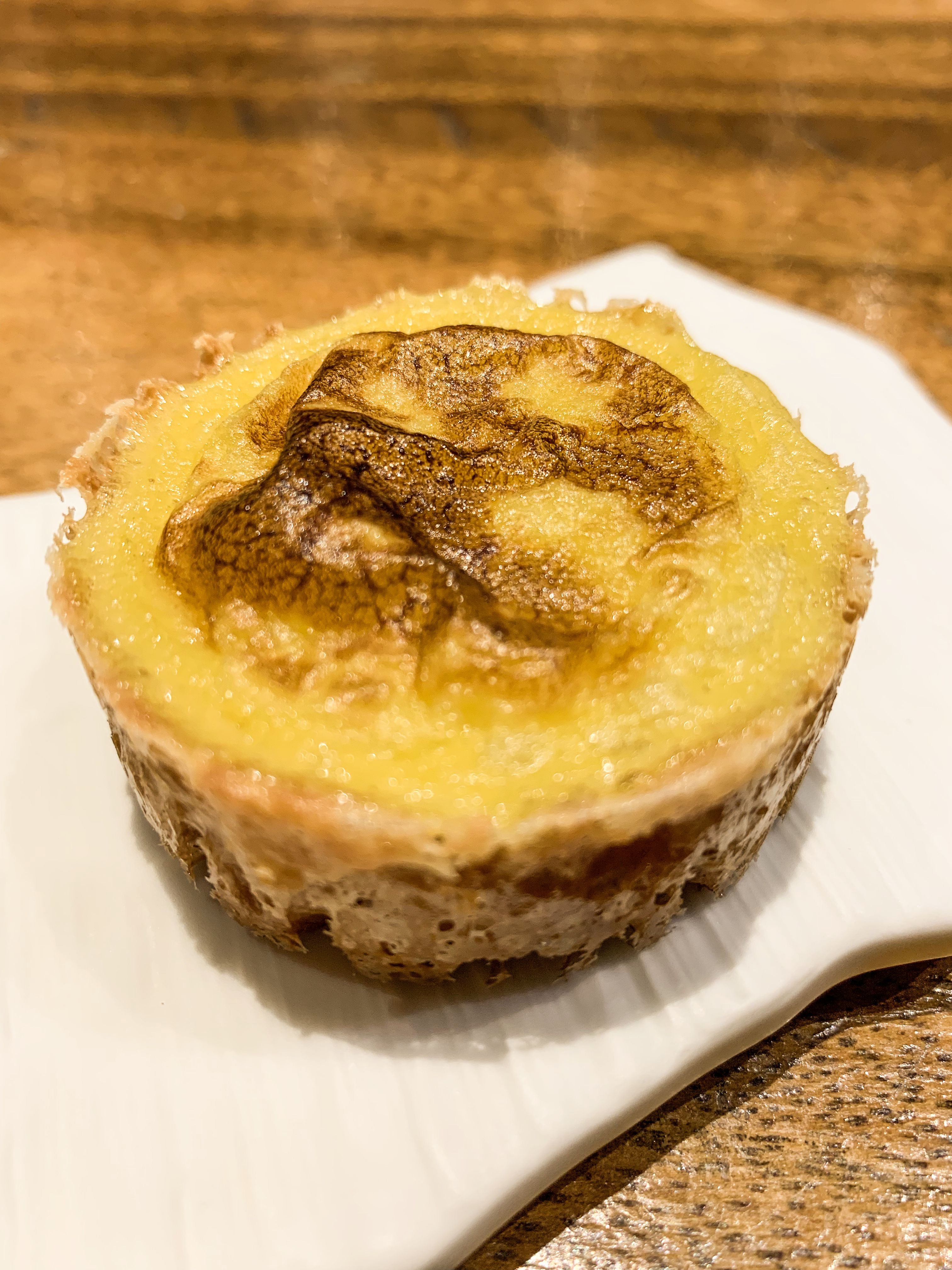 With the egg goji, I got a taste of the typical street food of India, very simply yet effectively created with just deep fried milk and eggs. 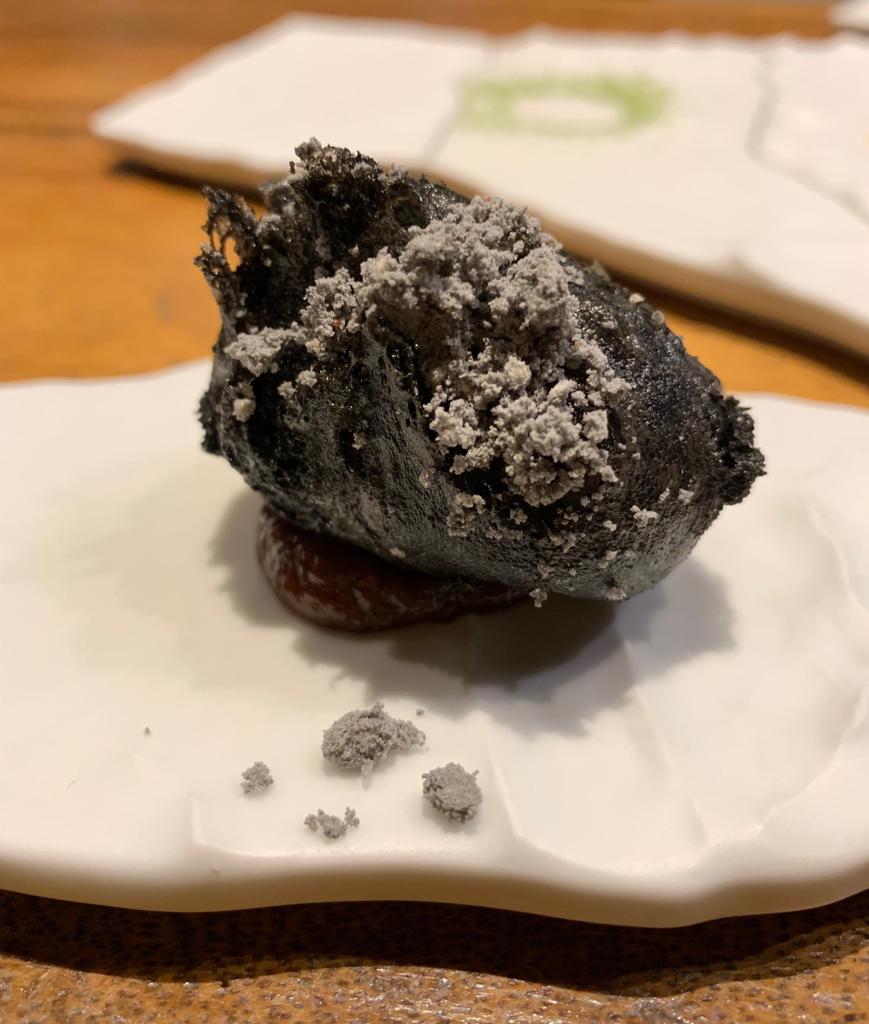 For my next course, I was served one of Gaggan’s signature – the charcoal. Looking exactly like what it’s called, this dish is actually made from eggplant and contains a lotus stem filling, coming with burnt onion sauce and powder to create. Of course, it tastes nothing like what it looks, and was absolutely delicious. 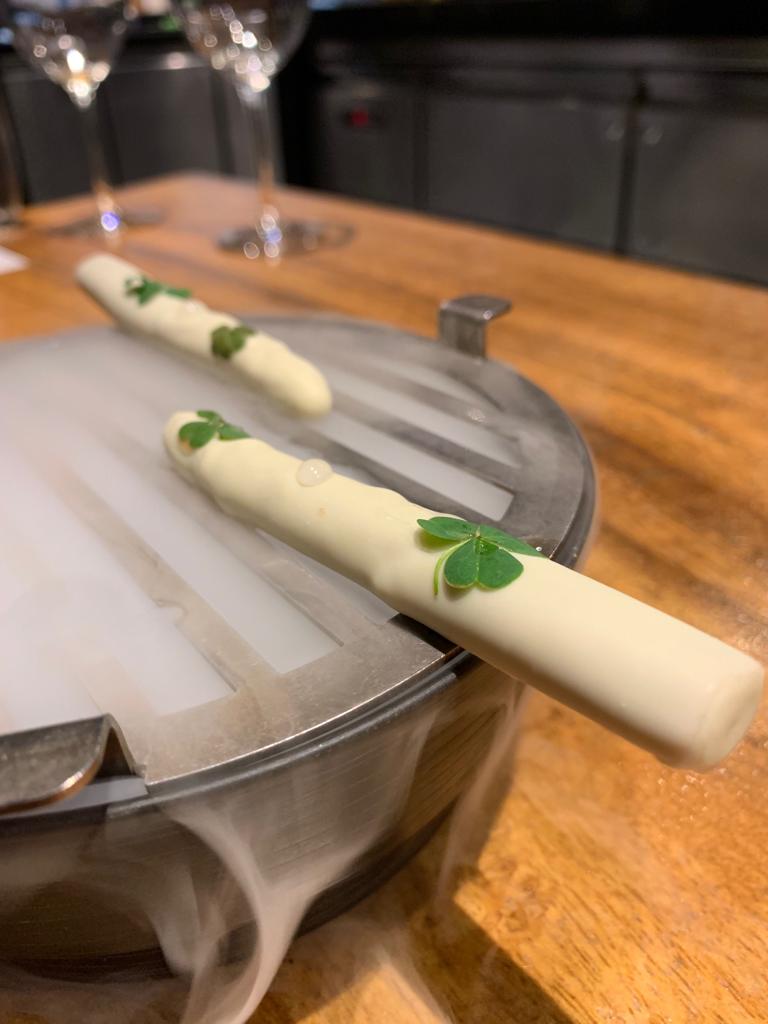 The poor man’s asparagus looks like asparagus, but in a clever twist, is actually made of brown butter ice cream with cauliflower puree. 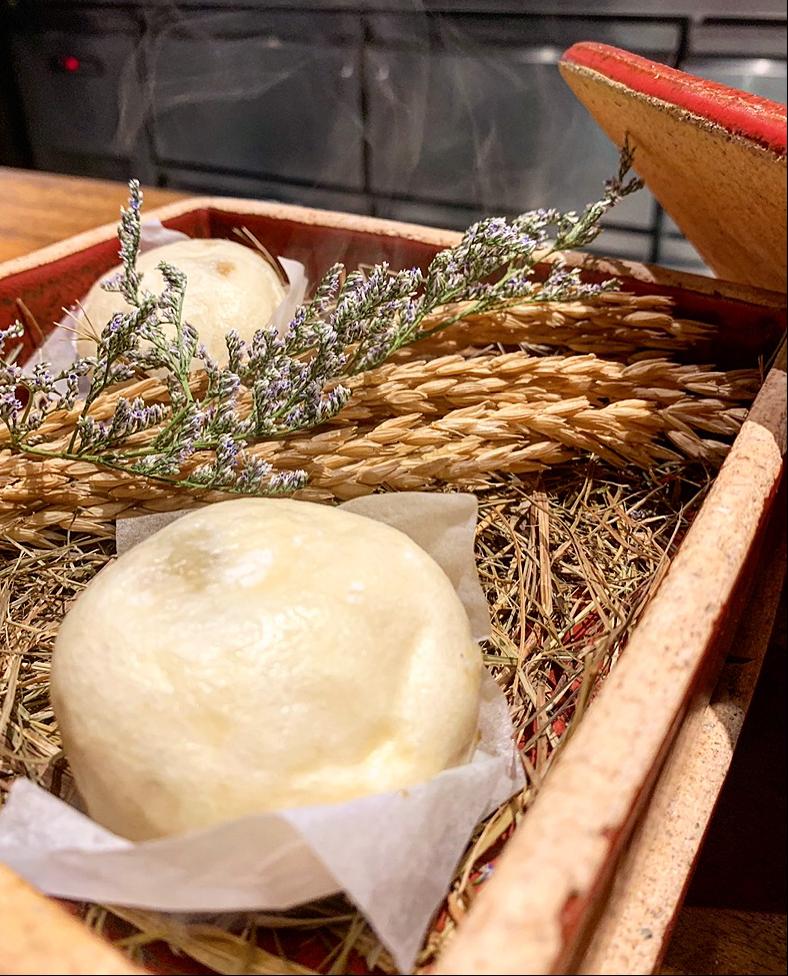 Next, the porcini camembert pau was served in an elegant wooden box, which, when opened, released a little smoke, and the smell of burnt grass and lavender wafted up into our noses. While the aroma was wonderful, this was one of the less successful dishes in terms of taste. One could see that Gaggan was trying to achieve the ‘liu sha bao’ effect and have the pau’s fillings burst out when one bit into it, but the skin of the pau was a little thick for our liking. Nonetheless, props for the gorgeous presentation. 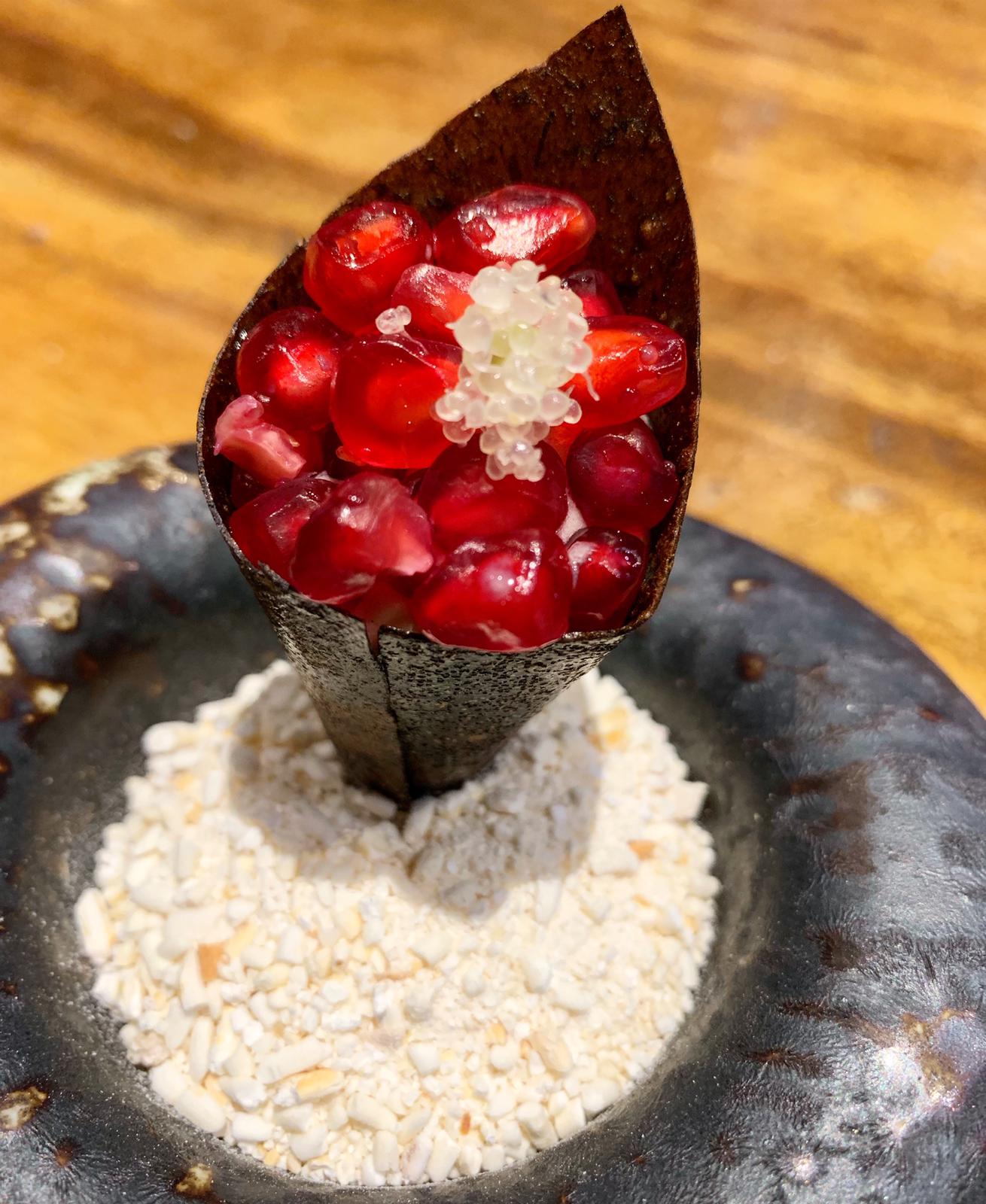 Before I knew it, I was being transported to Japan as I was presented with a beautiful ‘handroll’, made out of smoked eggplant ice cream with pomegranate seeds. While Japanese o nthe outside, the dish was really Thai on the inside, with smoked ice cream and the familiar taste of pomegranate one can find all over Thai streets that helped add that pop of flavour. 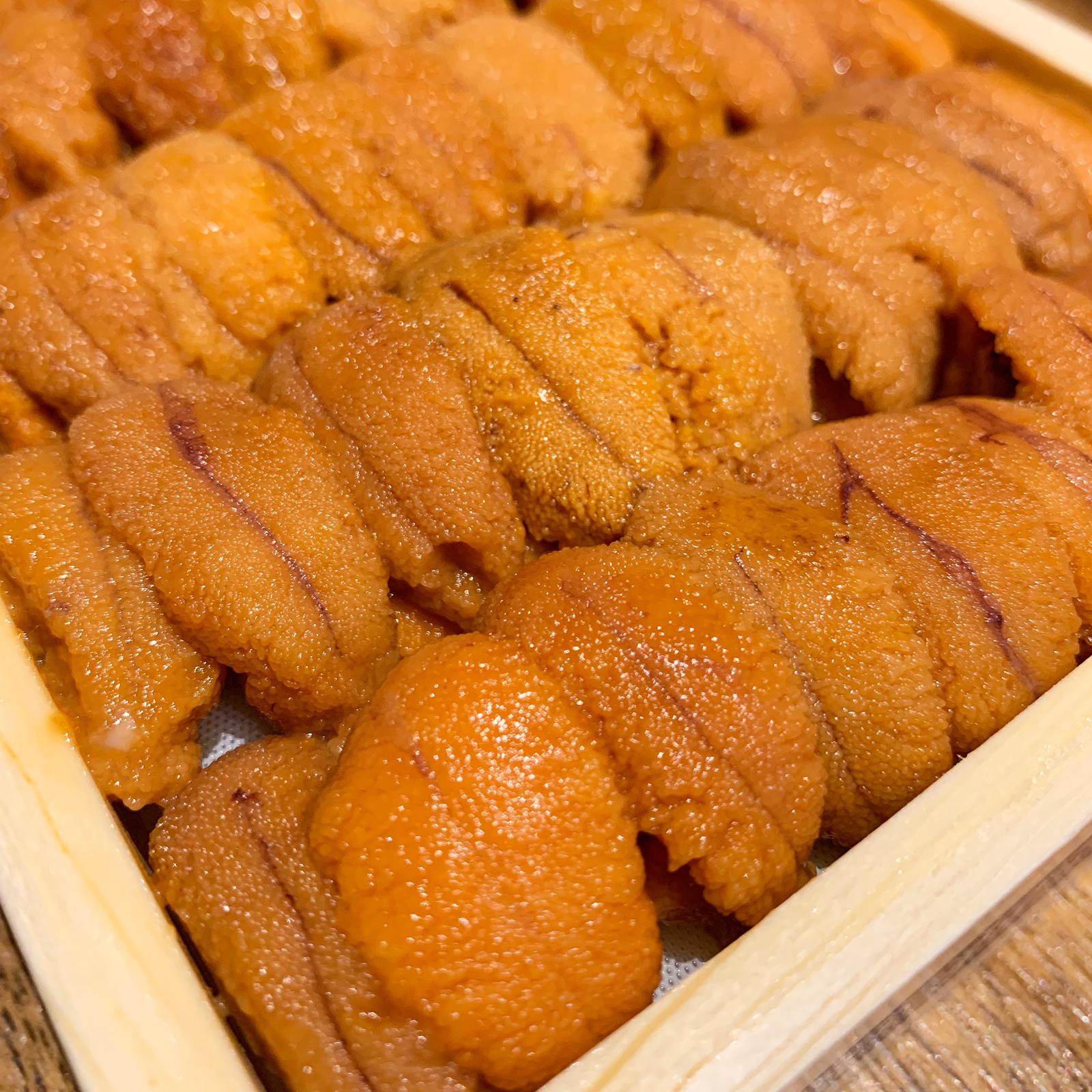 I got a quick glimpse of a box full of fresh beautiful uni, unfortunately not all for me, before the next dish, namely… 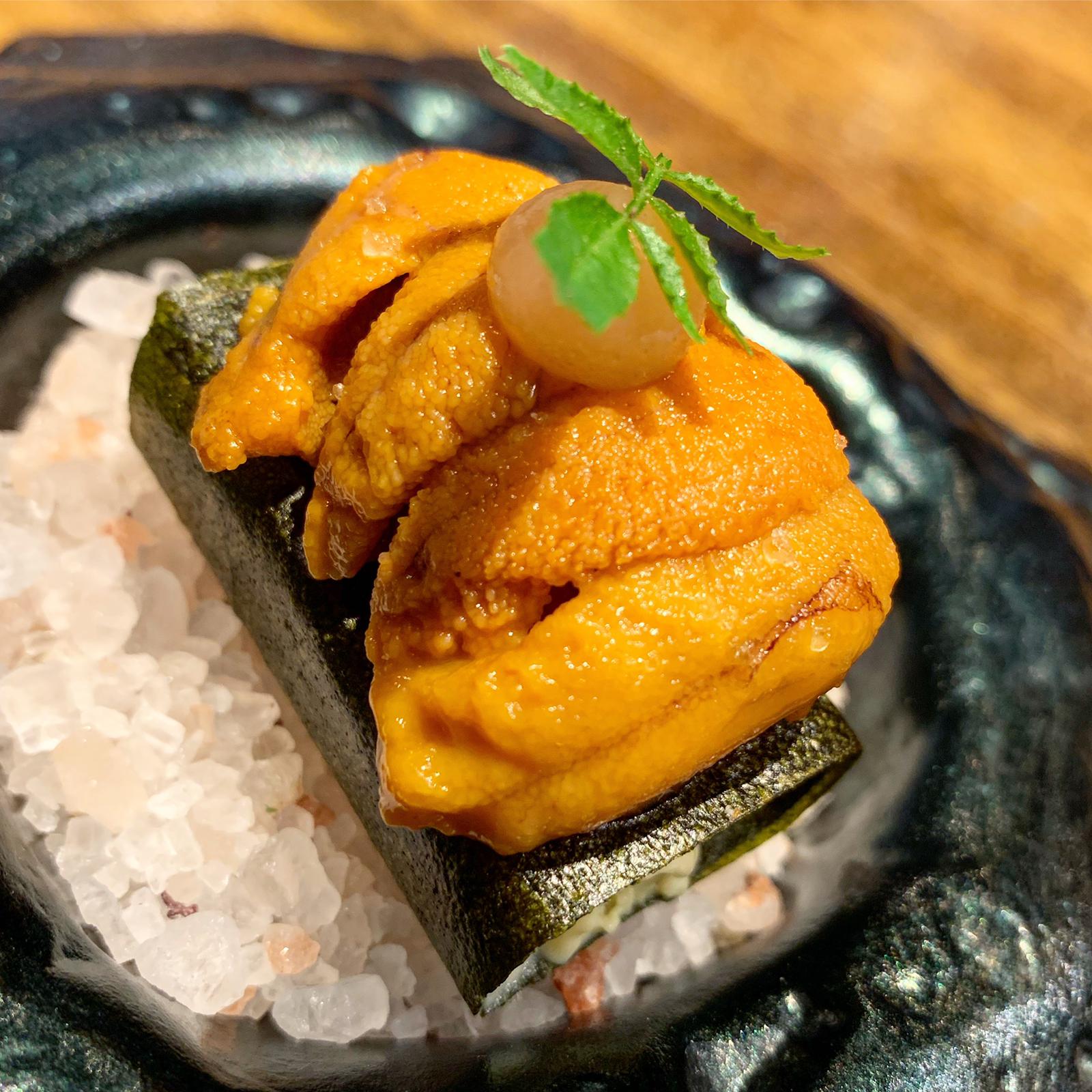 A luscious looking ‘uni sushi’. While it certainly looks the part, the uni was actually served atop a green apple puree, which helped bring all the flavours together in a single bite. 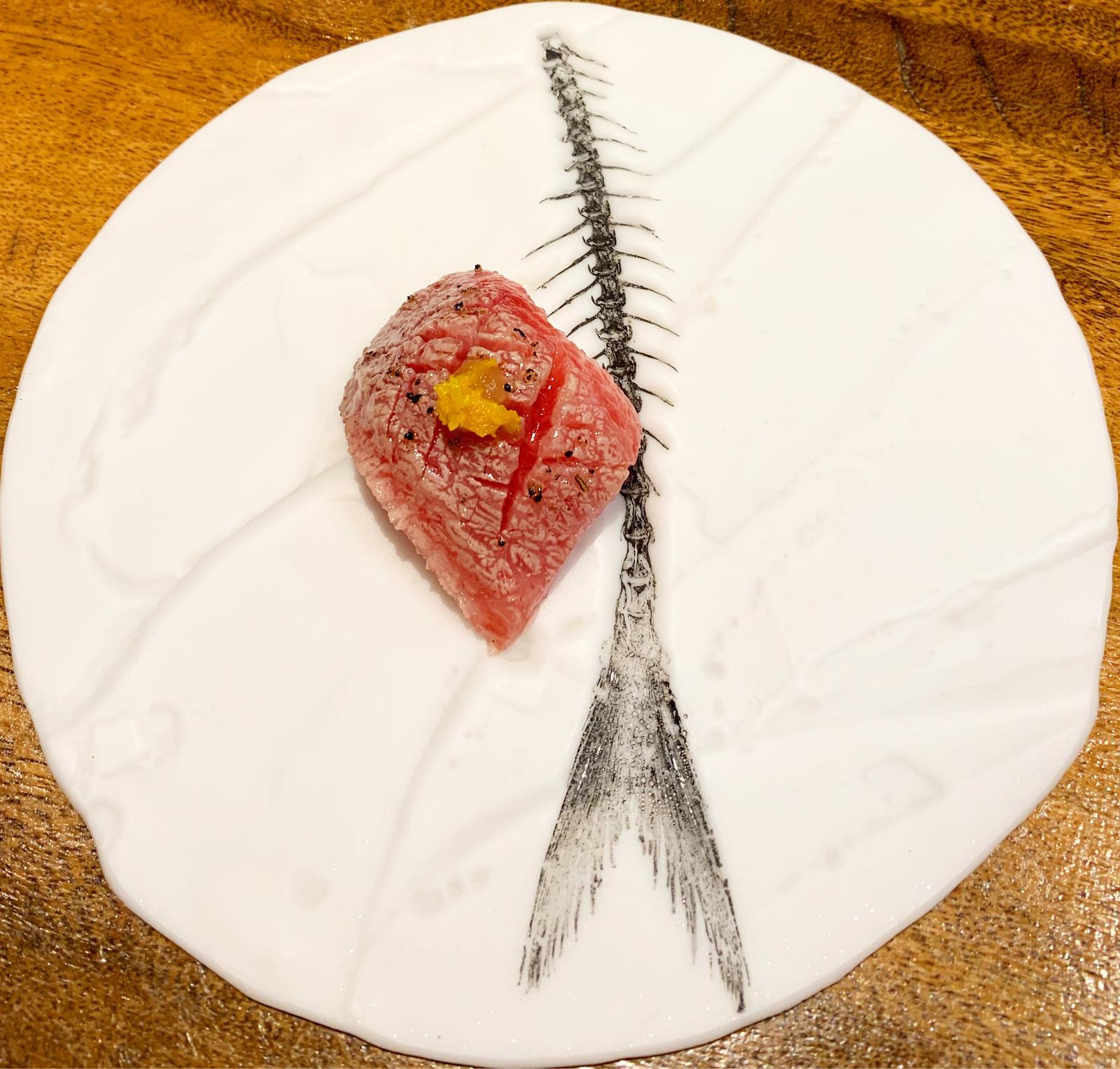 Still on our little trip to Japan, we were served seared otoro from Nagasaki, playfully presented with a fish skeleton. I really appreciated that the wasabi it was served with was hand ground, and a dashi meringue, typical Kyushu cuisine, It was finally time to leave Japan, and I was then served a little palate cleanser – the rasam, served in a nice bowl. A simple soup brimming with tamarind and black pepper, there was even a touch of the Gaggan class with a sprinkling of gold dust, making it feel luxurious. 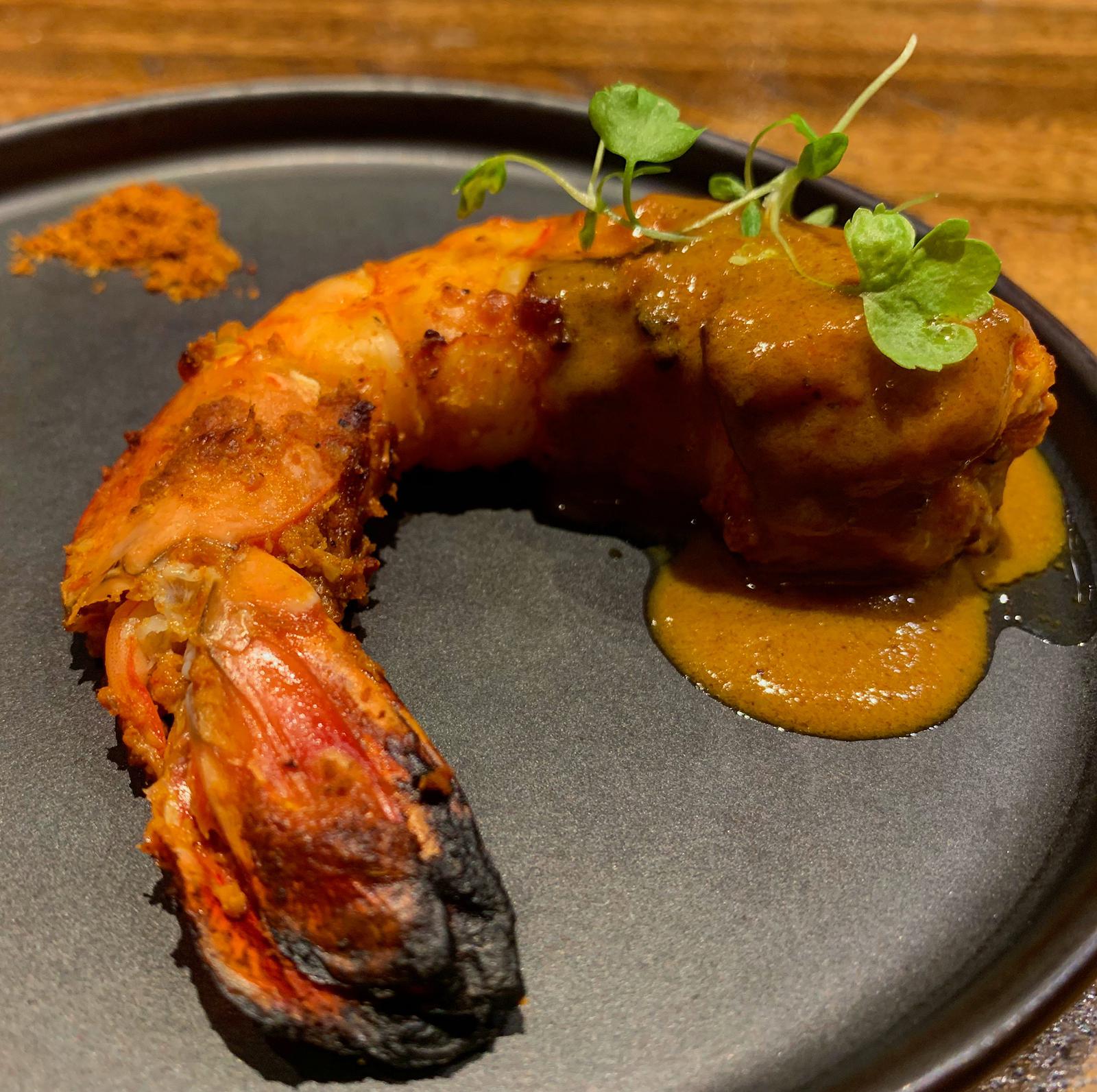 One of the highlights of the meal had to be the tandoori prawns. The fresh prawns were cooked to perfection with just the right amount of spice and heat, while the char on the tandoori prawn was simply amazing, Coupled with a little pickled sauce on the side, this absolutely made for a beautiful dish. 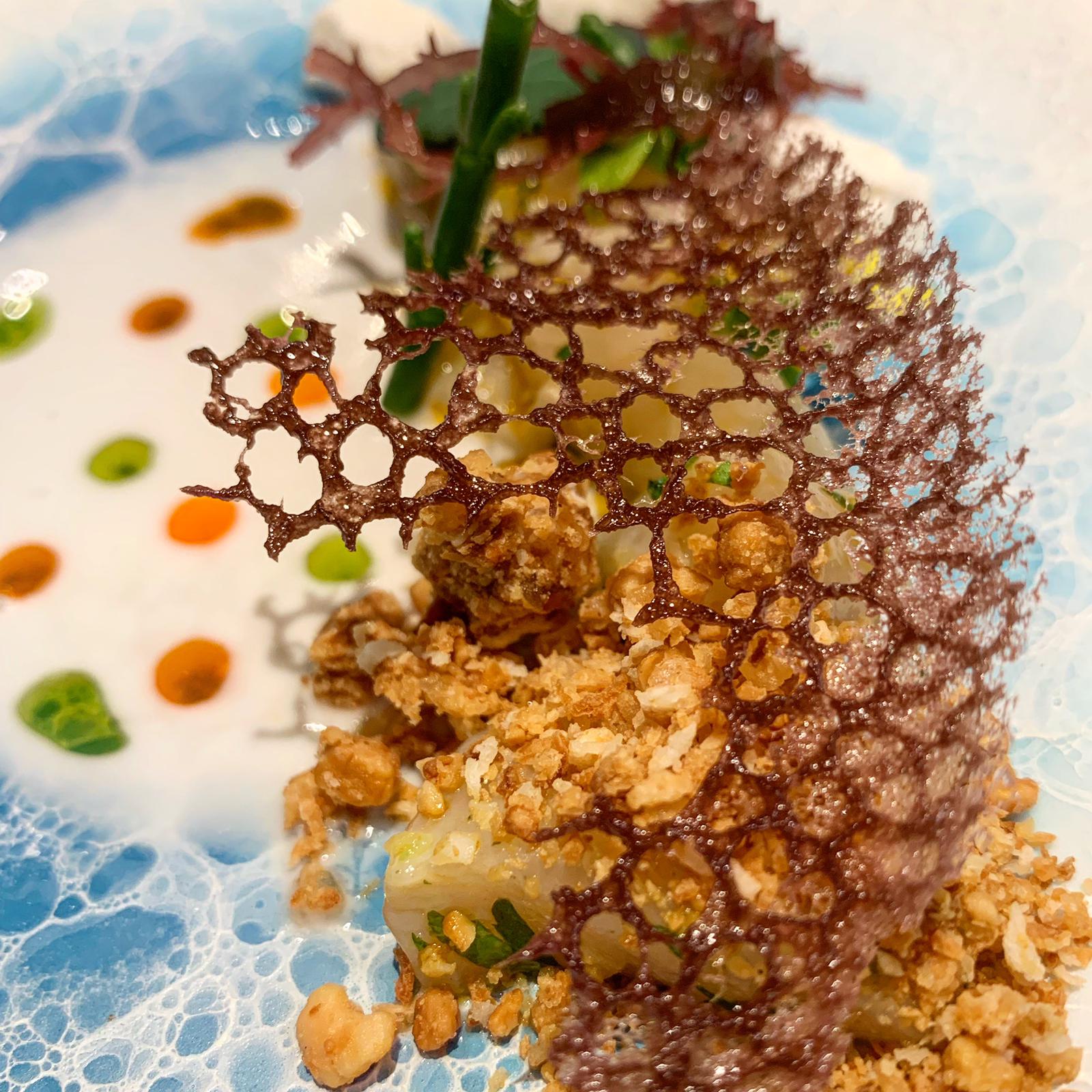 Next up was Hokkaido scallops served with ginger and coconut cream, dotted with curry oil and chili oil. Each dot a kicker, there was just the right amount of spice on that plate, the kind of dish where one takes a little bit of the scallop and put it in the sauce, mix it up, and essentially, you have a taste of Bangkok in your mouth. 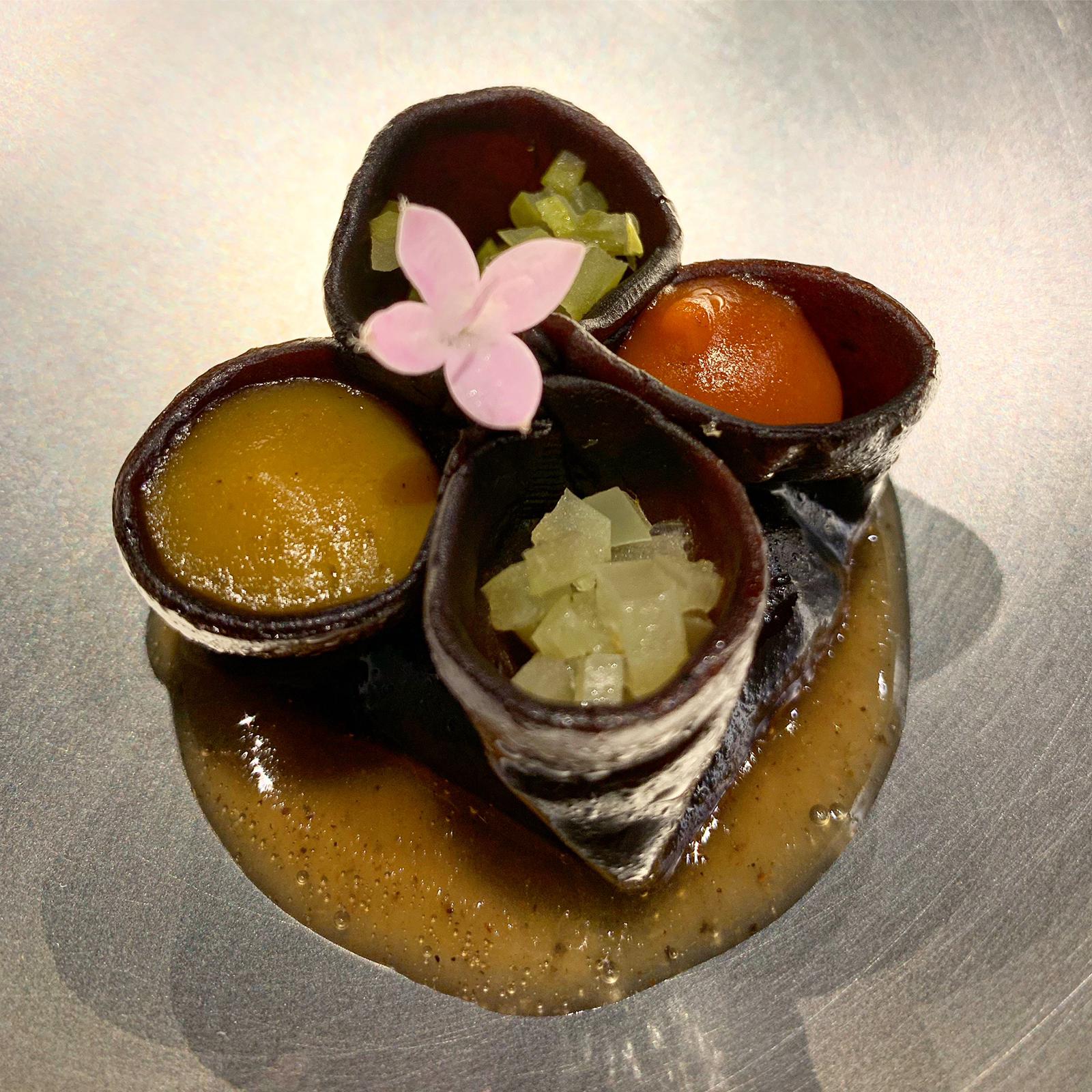 Next up, Gaggan’s interpretation of the traditional dumpling. Or gyoza. Or potsticker. Call it what you want, but it certainly didn’t look like a traditional dumpling, with the dough a little on the thick side, but with each ‘pouch’ presenting a fascinating medley of flavours, each one a different chili with a different base, coming together to create a very nice sense of heat in one’s mouth. 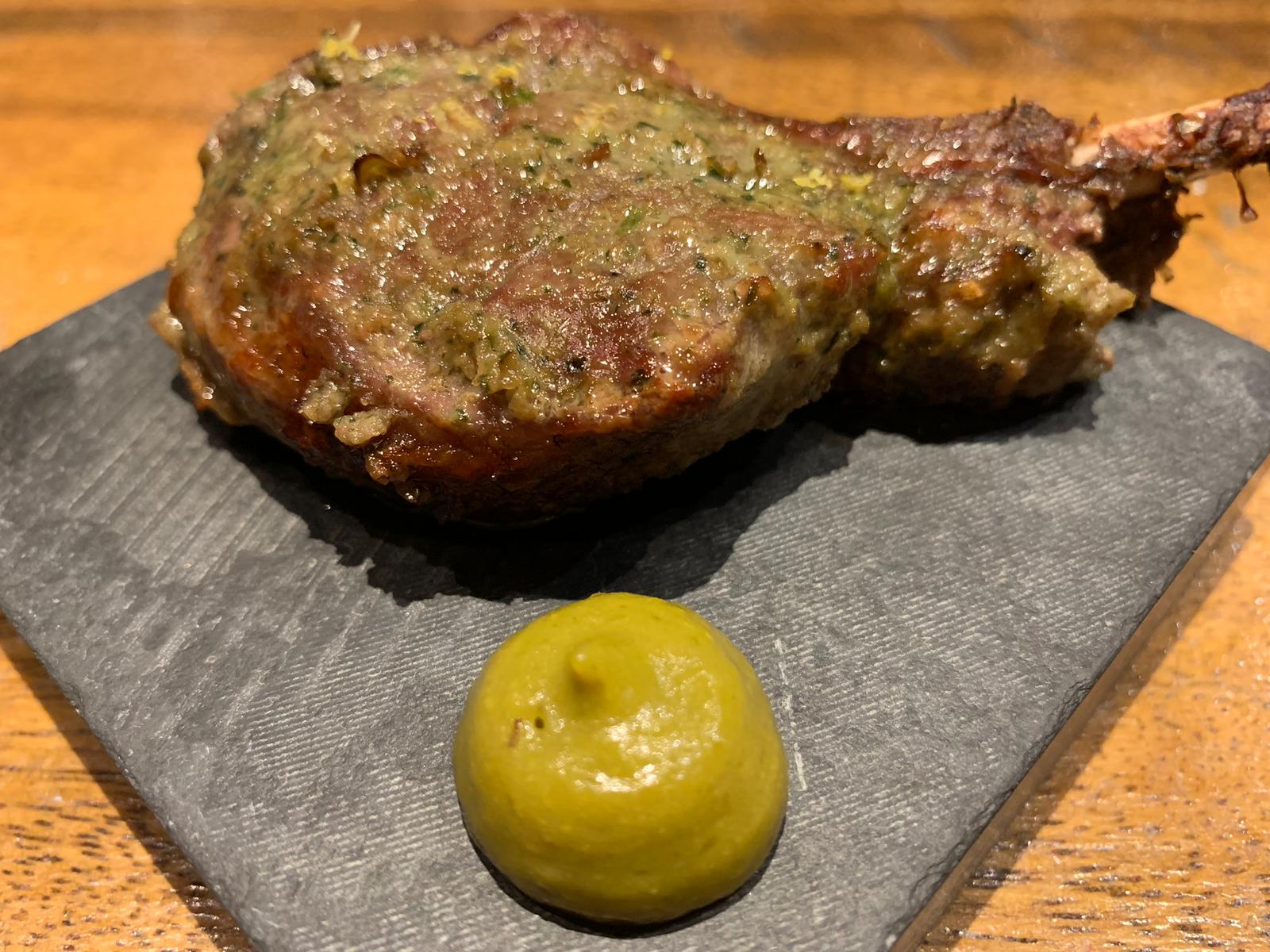 Yet another highlight of the night, the lamb chop was juicy and beautifully done, looking gorgeous as it was cooked to just the right colour and had all the right char marks. Chef Rydo told me to use my hands, and as we held the bone, it was magnificent how no matter how big or small one’s bite was, the luscious and juicy meat managed to cut right through, with the meat melting in one’s mouth. The meat had been allowed to rest just enough such that it remained juicy and sealed within the meat, and served with the green chili chutney, was a match made in heaven. Frenched to perfection, with the meat coming clean off the bone, this was one of the best lamb chops I have ever had. 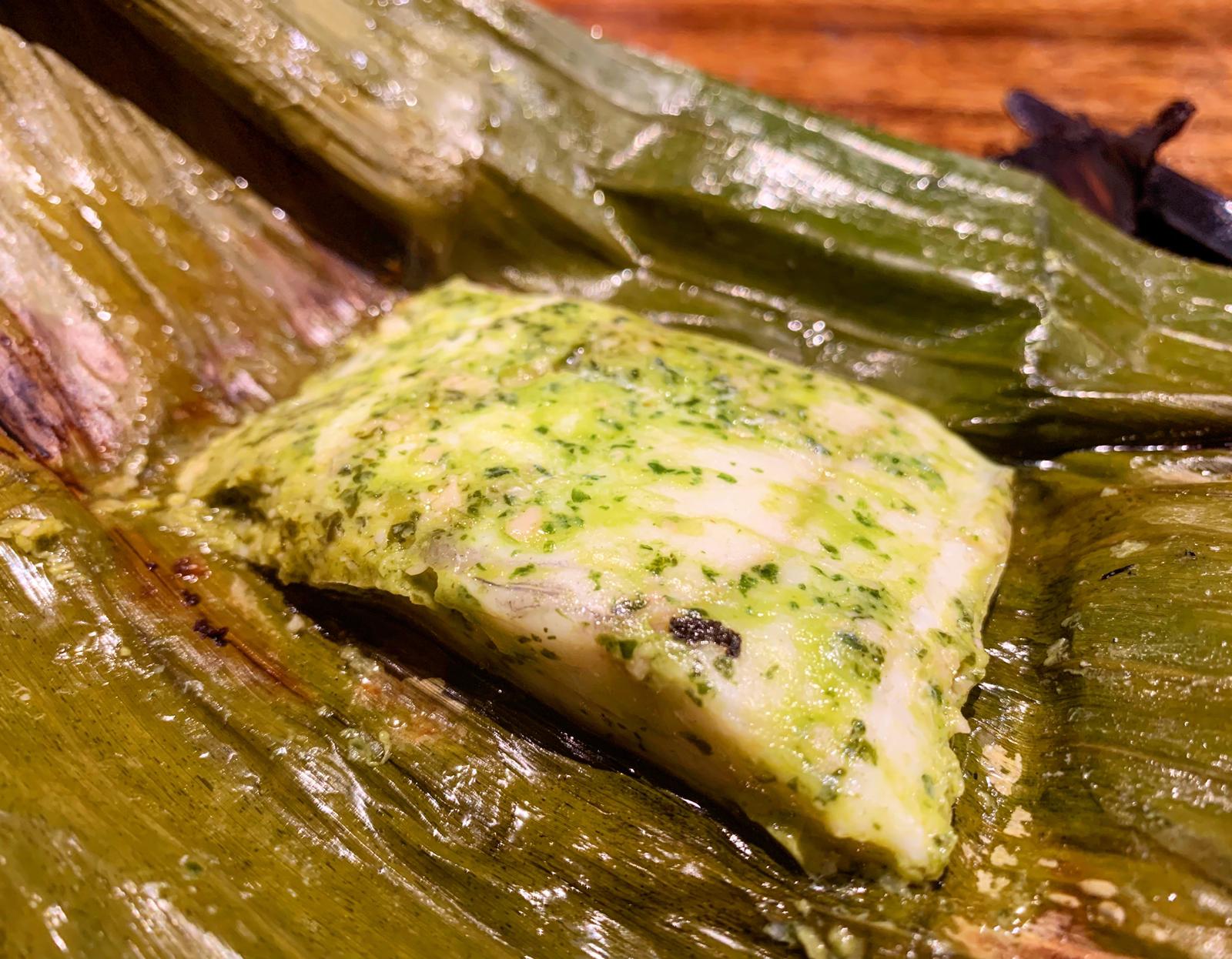 The meal continued on from there with an ‘otah’ fish dish served with mustard and green oil. 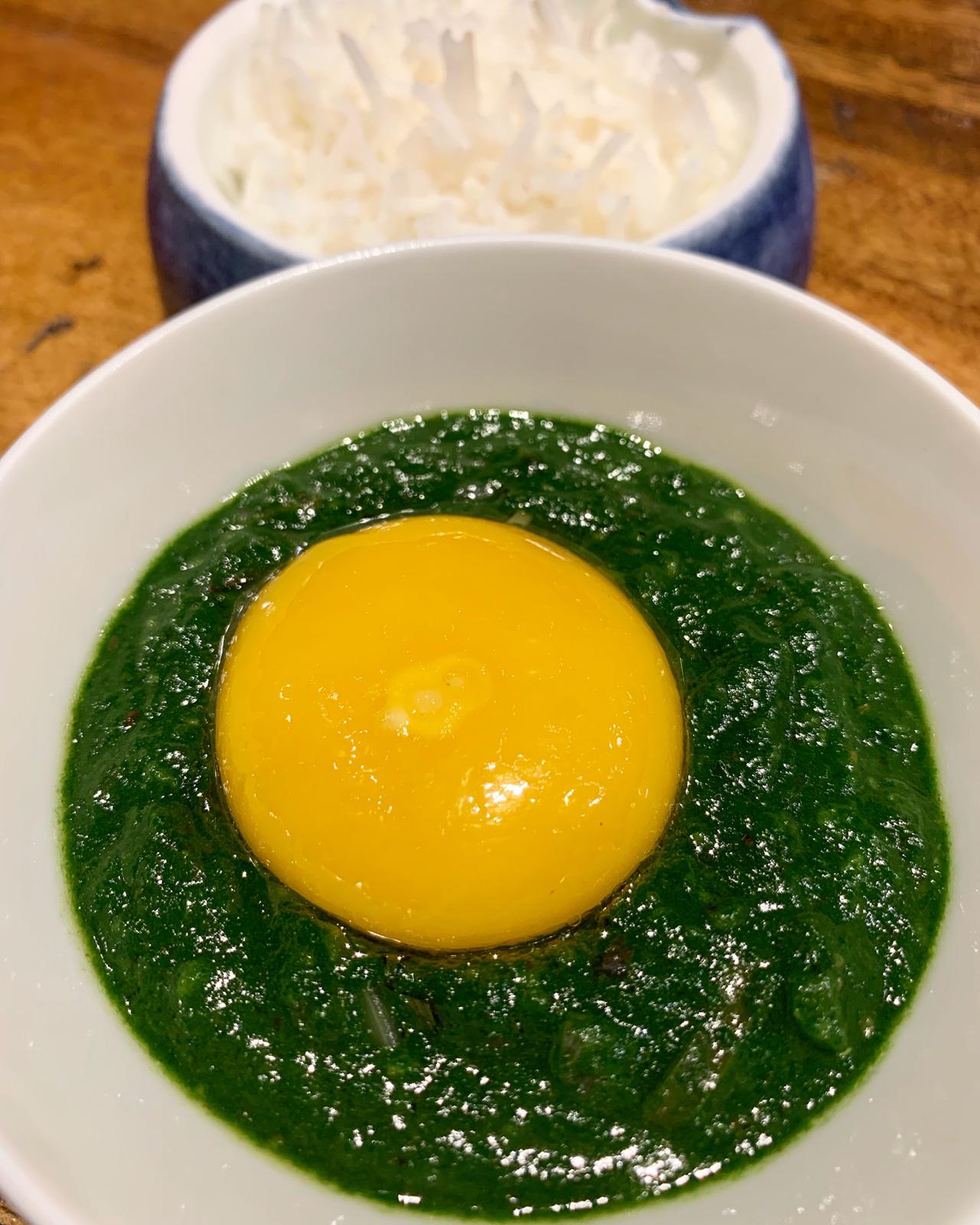 Before the meal then proceeded with the winter spinach and organic egg. This dish, oddly enough, had no egg or spinach taste, with the focus being on the delicious mix of spices they used. This was a dish that that leaves you warm, the grains of the rice cooked so well you could see the individual grains of quality, Thai rice that went well with the sauce. 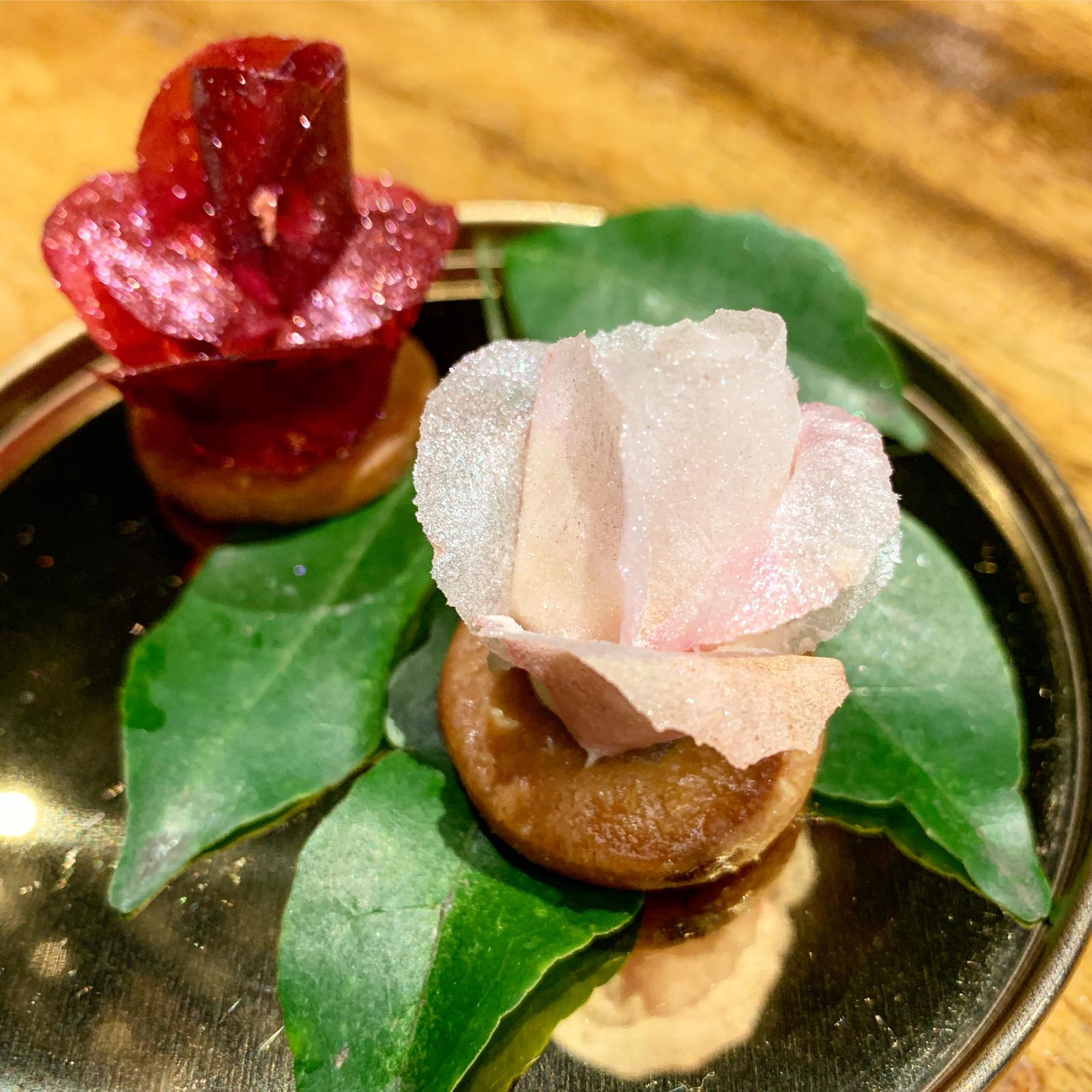 Finally, we were done with the savoury dishes, and moved on to the desserts. The  medley of sweets began with milk cake cookies made with Riesling and Muscat, decorated to look like flowers. 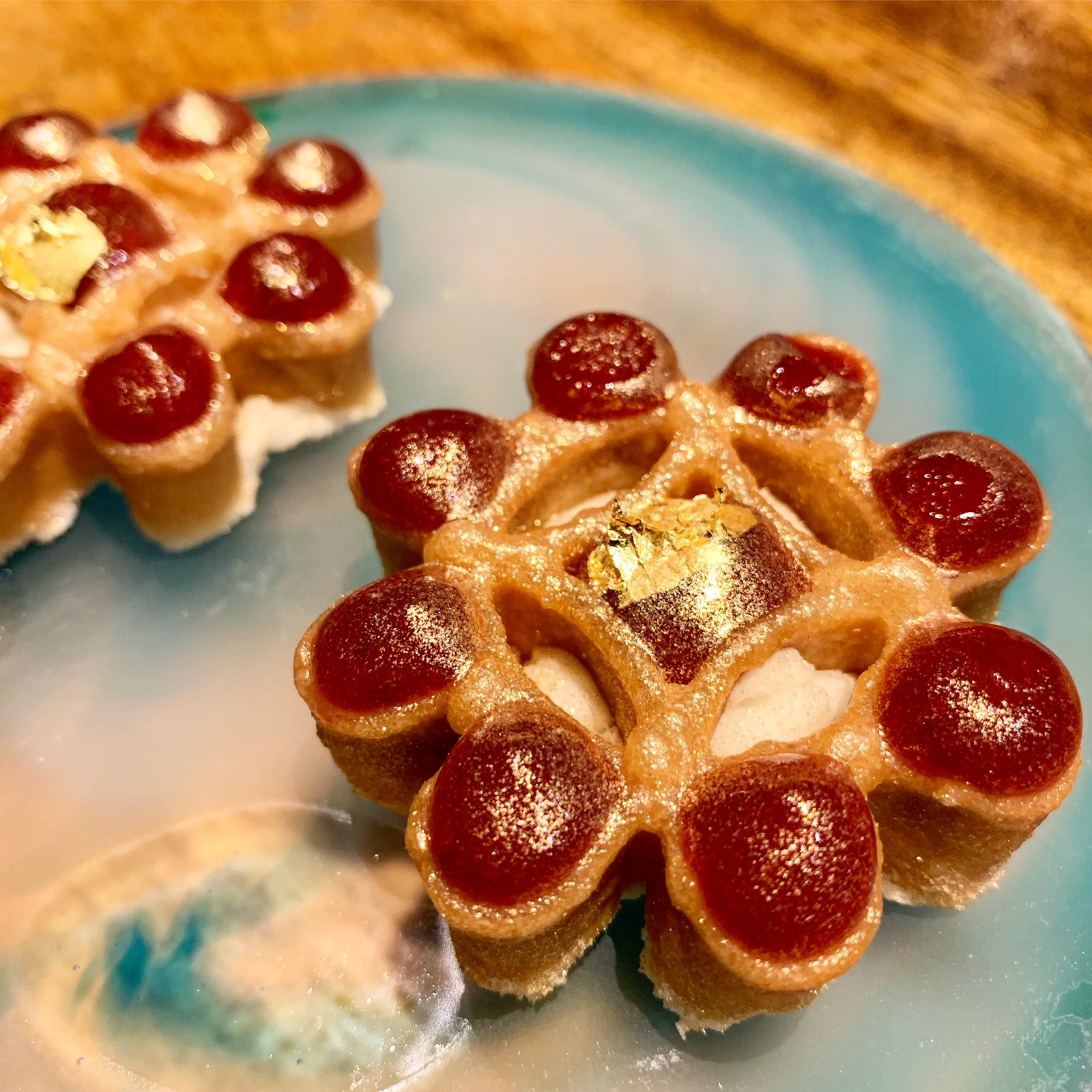 Next up, the yogurt, essentially a deep fried biscuit with strawberry jam using fruit imported from Japan, and filled with yogurt ice cream. One thinks of it as fried ice cream, Indian style. 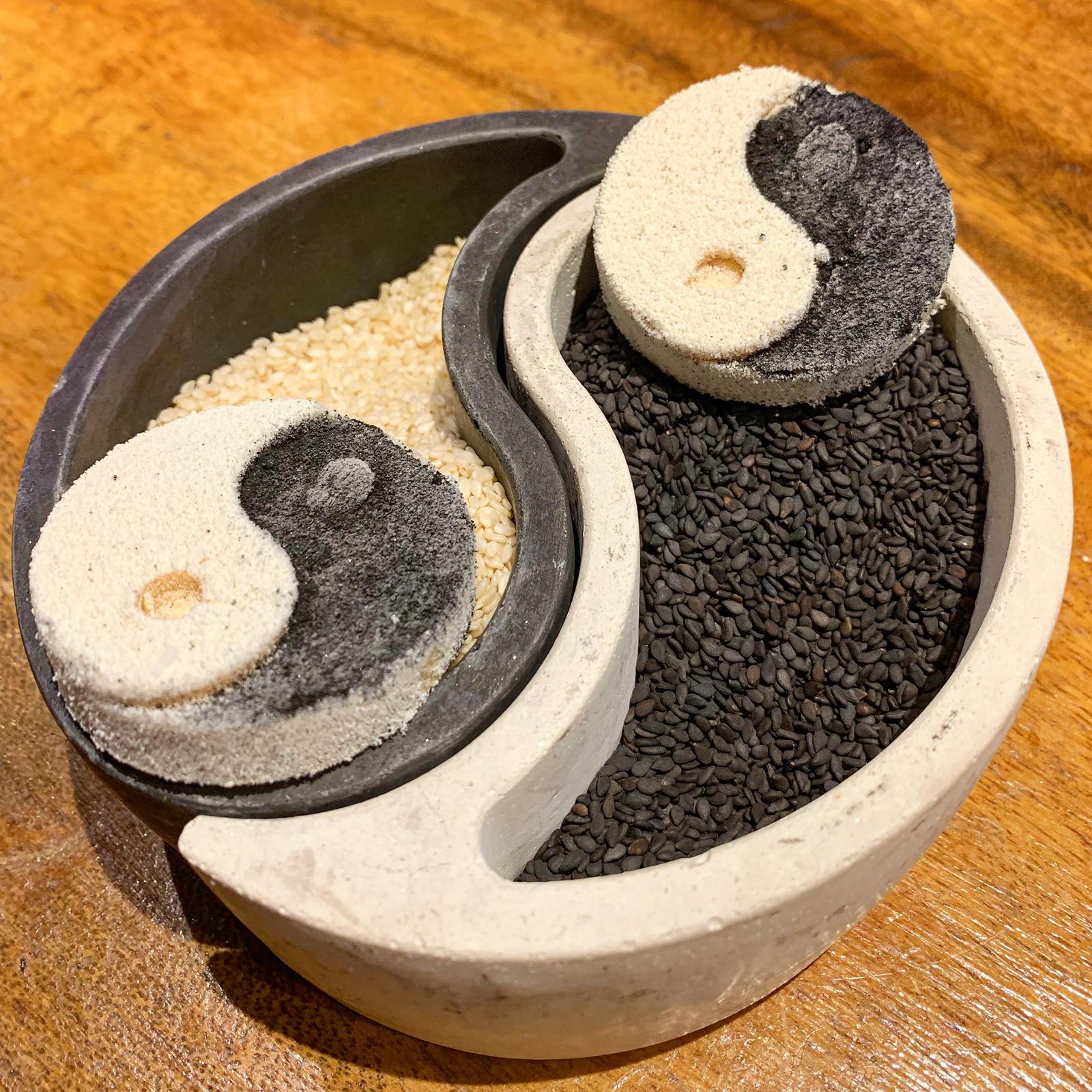 As I approached the final dish of the meal, I was served with a little yin & yang symbol, actually made of salted caramel popcorn and black pepper. Visually a treat, one thinks of how Thai people are actually very religious and steeped in their beliefs and customs. The meal itself was a little like that, with a zen-like, balanced experience that was so planned out, the tastes and dishes all felt like they were in perfect harmony, bringing guests the best of both India and Thailand. 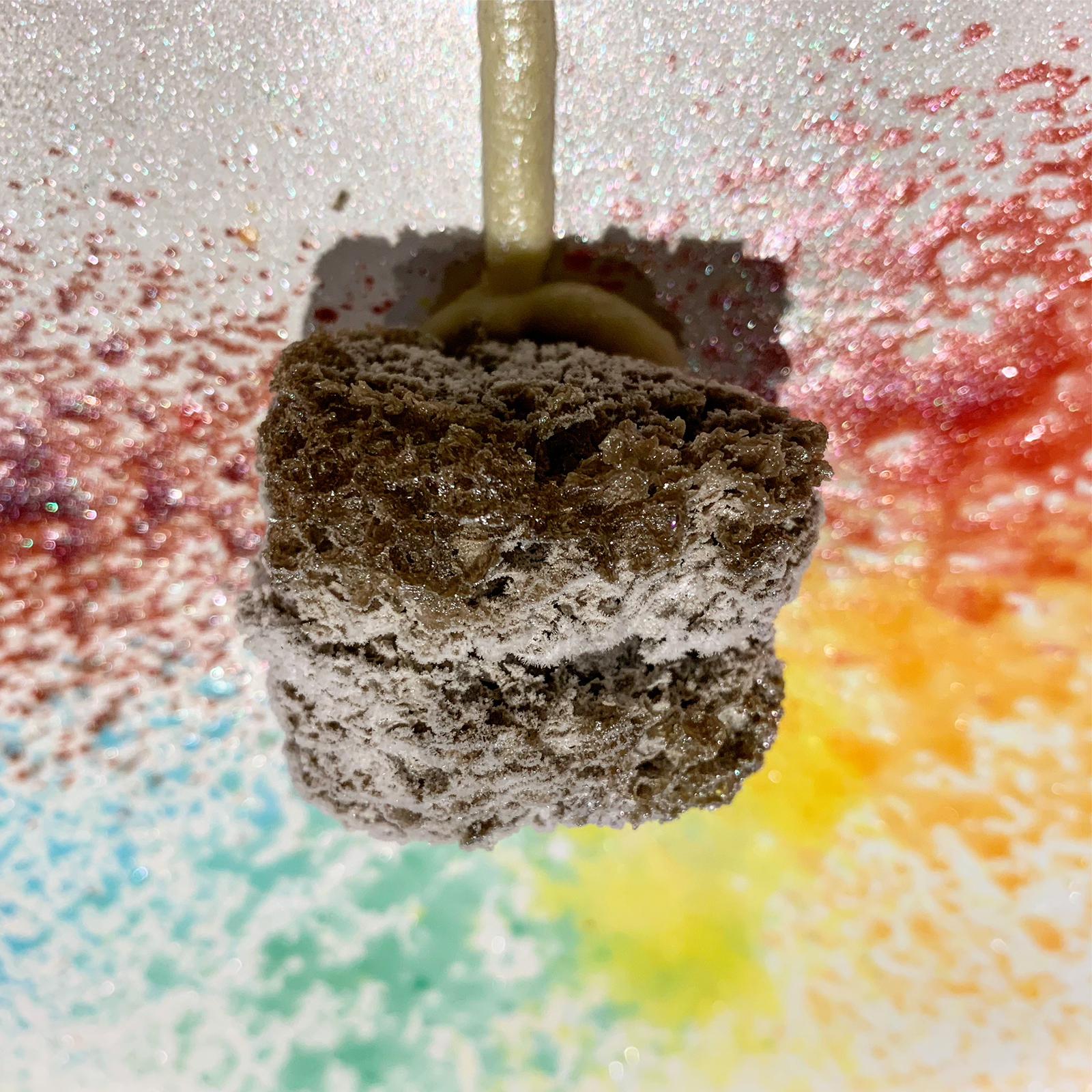 The final dish of the night was Gaggan’s own tribute to Pink Floyd, inspired by the cover of their iconic album Dark Side of the Moon. This was a fun dish to end on that showcased Gaggan’s joyous personality, something that has been evident throughout all of his dishes, and spreads to all of his staff. This meal at Gaggan was a revelation, and one feels the genuine sincerity and innovation and hard work that went into conceptualising and creating each and every one of these dishes, with the team no doubt doing exactly what they love. It’s honestly no wonder Gaggan held the top spot of Asia’s No.1 Restaurant for so long.