The impossible task of putting the meditative mind onstage is achieved in this visually stunning work from Japan.

Created by Japanese artist Shiro Takatani and his company Dumb Type, ST/LL is one of those rare, brilliantly inventive works of art that defies definition, combining dance, music, video and theatre to produce a series of masterful visual images in motion. Cerebral and abstract in form, there are perhaps a million and one ways to interpret this performance, but one thing that is absolutely undeniable is the sheer beauty watching it inspires.

To begin understanding and appreciating ST/LL, one would begin with its very title, where the slash drawing attention to the centre of the word, a state of in between. One sees ST/LL as an introspection into the human mind itself, where the performance becomes a portrayal of the states of mind as it delves deep into it, attempting to rebalance and find a state of calm through meditation. To do this, ST/LL immerses audiences in a surreal, void-like world, with a shallow, square pool of water onstage, reflecting everything that happens onstage like an inky black mirror. 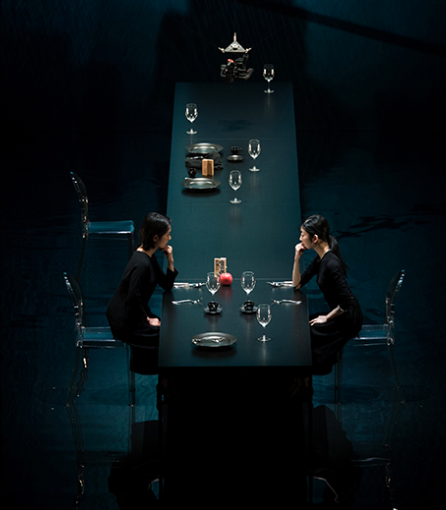 In ST/LL‘s opening scenes, we see a lengthy dinner table, while a camera hovers above and pans across, giving audiences a view of the objects on it, ranging from cutlery in various states of disarray to metronomes ticking in unison. Two performers arrive to sit at the table, mirroring each other’s movements as they eat non-existent food and drink non-existent tea. One thinks of how life itself seems to have lost all meaning, the absurdity of enforced social graces, rules and etiquette put on trial as the performers go through the motions in silence, performing but not feeling. It is this act that seems to be the catalyst for the rest of the performance that follows, this feeling of being out of place in the world and out of sync with what society demands that makes the performers want to retreat into their own inner sanctum, finding peace with themselves as they go through a dark wonderland’s worth of thoughts and reflections while diving deep into their selves. 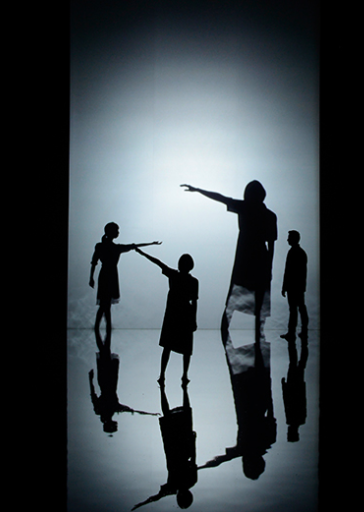 What follows is one varied scene after another, with the performers interacting with and integrating the visual imagery into their movements, forging a curious relationship with it as they move about the space, completely transformed each time the visuals change. The scenes never have any immediate sense of connection to each other, but are all linked in their own way as they break the very laws of time and space itself, this world where shadows dance of their own accord, a layer of fog descends while a lone figure dances on the water, watched by a camera, or a woman runs circles, visible only intermittently when the pale light catches her just right. Yet, in spite of these disparate images, what perhaps links it all together is an underlying thread of loss and displacement felt in each performer as they navigate and attempt to find truth within the absurd, just as we are constantly attempting to find meaning as we catch every movement and every moment onstage. 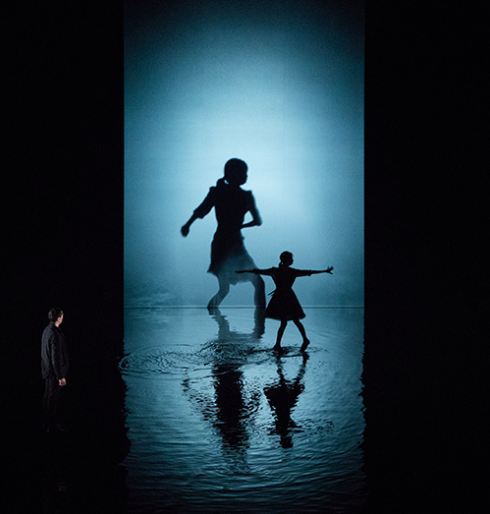 Key to this performance’s success is the lighting of Yukiko Yoshimoto, the multimedia of Ken Furudate and the music of Ryuichi Sakamoto, Marihiko Hara and Takuya Minami. Each of these elements can themselves be considered performers in their own right, contributing to the void-like realm of possibility ST/LL sets its world in, where one should only expect the unexpected, much like when one enters a dream within a dream, twisting, shifting and bending with each scene. One cannot help but feel a sense of wonder in each moment, as if discovering the very limits of what performance art and visual installation can reach, encapsulated in this one work. 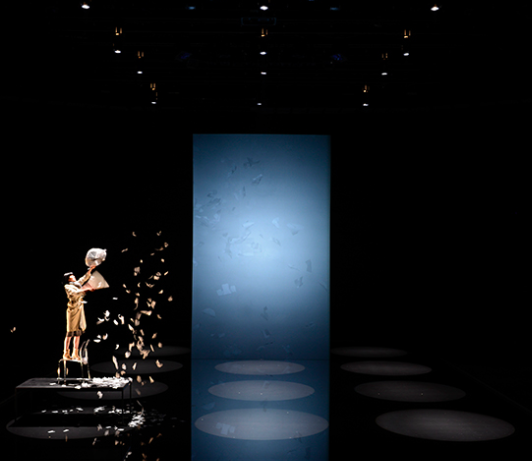 It is hard to pin down any one scene that stands out most to us – is it the one where a labyrinth of lightbulbs descend and the performers weave in and out of it while an Ainu lullaby plays in the background? Is it the one where they writhe and stretch while lying on the dinner table, seemingly lost in space as the camera projects them ‘swimming’ aimlessly? Or is it the video of various objects falling from above, never knowing if they will shatter into smithereens, or miraculously, bounce off the surface of the ground? In all honesty, you could pick out any one of these scenes and still be left awestruck by the sheer imagination that goes into it, going against anything and everything we may have become accustomed to.

Ultimately, the brilliance of ST/LL lies in its ability to give form to that which seems impossible, presenting not just time and space as art onstage, but also evoking something deeply emotional, taking us on a journey out of the void, out of the darkness we so often find ourselves in each day, and letting us know that it’s ok to take time out to give ourselves a moment to reflect and to access our inner selves. ST/LL ends as we arrive at the shore of the sea, the sound of waves gently lapping at the sand evidence of finally, having found some kind of inner peace. The performers stand still, looking at each other, perhaps knowing that this peace may not last for long, but at least, it will last for now.