After seven years of work, Drama Box and ArtsWok Collaborative’s Both Sides, Now is finally coming to a close as the community engagement project ends with an art installation and carnival at Telok Blangah. What started in 2013 as an exploration into end of life issues and how they’re tackled in Singapore has gone on a journey, reaching out to various communities across the island as Both Sides, Now dispels its taboo nature and teaches the public that it’s ok to talk about the end of life, regardless of age or background.

Says Drama Box/Both Sides, Now artistic director Kok Heng Leun: “To me, it was a very important subject, because it’s a topic that not many people talk about, or even think about. We like to think of death as the final stop, and it was intriguing how people never really thought about the process of preparation leading up to it.”

Heng Leun goes on to explain how the project began as a collaboration with artist Jasmine Ng. Recommended to work with the Lien Foundation and Ang Chin Moh Foundation, it wasn’t long before the team referred to an index that the Lien Foundation had put together, and discovered how even some medical professionals were not equipped to talk about the end of life. Heng Leun adds: “This was especially surprising since they’re the ones at the frontlines, and it got me thinking, why is it so difficult to talk about such a topic? That in turn formed the starting point for this project. We then started working with hospitals, as well as engaged in outreach efforts with the public to encourage them to then start conversations with family members about this.”

The project kicked off with a research phase, where representatives of Both Sides, Now approached medical social workers, hospitals and patients, along with people who do funeral services, totalling about 50 – 60 interviewees. Adds Heng Leun: “This gave us a good understanding of the scope of work that goes into preparing for the end of life, and we received so many stories about how different kinds of people responded to end of life issues. These stories then acted as the basis for the material of our events, like our performances.”

This then led to an immersive arts experience at Khoo Teck Puat Hospital commissioned by Lien Foundation and Ang Chin Moh Foundation, and produced by ArtsWok and Drama Box. Visitors encountered artworks in the main foyer, ranging from short films to interactive installations, as well as performances. Following this, Both Sides, Now went on to travel out to Khatib and Toa Payoh, reaching out directly to the community with forum theatre play, Exit and puppetry show, The Wind Came Home, both dealing with end-of-life topics, including difficult decisions about managing illness, caregiving and death. Says Heng Leun: “Considering previous iterations were like mini-carnivals, where people could drop by and watch whenever they wanted to, maybe it’ not so surprising that we’re ending this project with a big carnival.”

“In fact,” he continues. “During these sessions, we found out how a lot of elderly actually did want to talk about it. But the problem sometimes comes about when there’s a conflict with your upbringing, religion, or even that family members are too busy or uncomfortable talking about it. And for those from lower income backgrounds, they’re already struggling to even get through each day, and thinking about death makes it that much harder to get by. So then it comes down to us to create that conversation, and use different approaches to help each group learn how to talk about it. That’s how and why we came up with so many workshops and activities to benefit these residents. It’s a long process, and we were still very new to the whole thing, so in a sense, even doing the work became a kind of research we built on to improve with each iteration.”

With the overarching aim of ensuring members of the community are supported in making informed decisions about end of life plans, Heng Leun explains a little more about the basis for the project, elaborating: “Talking about dying is acknowledging that it’s something inevitable. Yet while we all know that, a lot of people don’t think about the process of actually dying. That can seem like a scary process, but we do want to prepare people for it by shifting their mindset and having them think about preparing for it. In preparing for death, one must first look back at how one lives. Even if you’re not happy in life, how then do you ensure that in the last part of your life, you learn how to leave with a kind of dignity. And they don’t have to do it alone – they can talk to their family and loved ones about it, and really, we just want them to create a space where death itself can lead to a conversation.”

Speaking on the process, Heng Leun emphasises an increasingly community-based, arts-driven approach, hoping to strengthen social ties and motivate sustainable involvement among community members. Says Heng Leun: “For the most part, this is a very dialogic project, and is all about dialogue and listening. It’s important that the people felt like they were being listened to, so that means we needed a lot of volunteers to help out and address each audience member. Our creative team is very unique, with ArtsWok Collaborative helping out on the production side. They act as an intermediary, and help us figure out how to build a relationship with the community and bring the conversation to them. It helps that they also spend a lot of time speaking to the stakeholders, and about the areas we need to address. They’re there to be the connective thread to the source material, while the actual engagement ends up being done by the artists and Drama Box.”

“Honestly,” he continues, “there isn’t a one size fits all solution to this issue, whose results differ from community to community. Our activities really just wanted to help residents find some kind of joy they may have lost along the way, and to inspire and create that sense of wanting to leave behind something meaningful, and to enjoy life while they still can before the end of life. These activities would engage them, perhaps getting them to create some art, and in the process, they’ve really opened up, wanting to learn how to deal with loss, how to connect more, and even gain a sense of community for each other and listen to each other talk. Some people don’t have that conversation at the end of shows, but end up talking about it after with their families. We also worked together with the hospitals to create a system where residents would be able to go to certain people to talk about it if they wanted to follow up.”

While the process and project has been a long one, Heng Leun expresses what more he hoped Both Sides, Now could have explored, stating: “Maybe something we wanted to explore more was the idea of religion and how different perceptions affected their view of end of life issues. Right now, we’re doing some research on how we can better engage children, because they do need to think about it too, and we’re developing a series of activities for kids and their family members to better handle and discuss these issues.”

Heng Leun assures us that even though the project is over, the relationship and sense of continuity remains: “As a company, it can be easy to do this project then move on, but we’ve ensured that we don’t just leave these people behind, because we work with our stakeholders, such as a wellness centre in Chong Pang, which will continue to act as a hub and point of reference for the residents even after we leave. Some of our artists are also still in contact with the residents.” 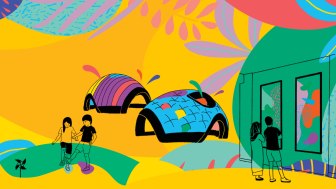 He concludes: “Over these 7 years, we’ve accumulated so much knowledge that has resulted in our being able to use Both Sides, Now as an art-based toolkit people can use for these issues. To sum it up in one sentence: death need not be a scary thing, and doesn’t have to be faced alone.”

Photos courtesy of Both Sides, Now

The Both Sides, Now Public Art Installation and Carnival runs at Telok Blangah from 29th June to 7th July 2019. Admission is free. For more information on Both Sides, Now, visit their website here