Transitioning from one medium to another can be a daunting task, with the biggest question being “what does the new form add that the old one did not?” But for Indonesian director Kamila Andini, the answer to that is clear, with the stage adaptation of her 2017 film The Seen and Unseen.

Born out of a desire to find her identity as an Indonesian, The Seen and Unseen is a deeply spiritual work, finding connection between our (irrational) beliefs and how that contributes to our selves. Directed by Kamila and choreographed by Ida Ayu Wayan Arya Satyani, The Seen and Unseen follows twin siblings Tantri and Tantra (Ni Kadek Tthaly Titi Kasih and Ida Bagus Putu Radithya Mahijasena, reprising their roles from the film). With Tantra beset by a life-threatening illness that leaves him bedridden, Tantri realises she will not have much time left with him, dancing as she finds herself between reality and imagination, loss and hope as she journeys into womanhood. 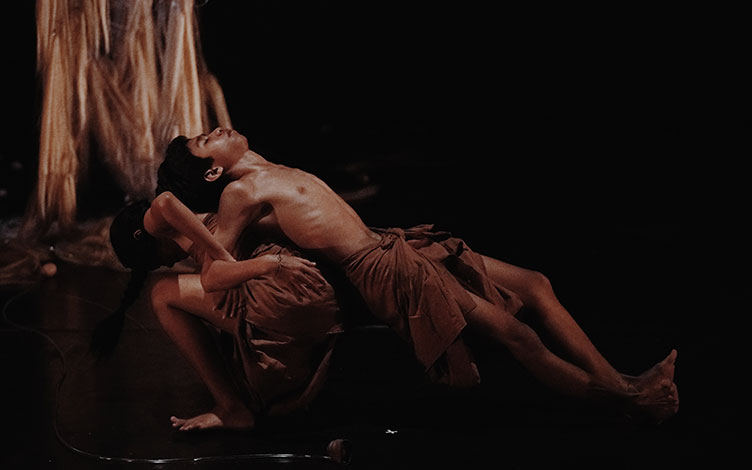 Throughout The Seen and Unseen, the production constantly attempts to draw us into its surreal world through its design, the intimacy of the Esplanade Theatre Studio key to our total immersion. Thanks to composer Yasuhiro Morinaga’s soundscape, from the moment we walk into the theatre, we can already feel as if we are transported into the night, with the sound of crickets chirping in the background. Jenny Hector’s lighting design always ensures that there is a clear sense of mysticism from the way it illuminates the stage, starting with a circle of light in the very first scene.

This first scene, titled ‘Birth’, makes it clear that both twins, dancing within the circle, are in fact, within the womb, wherein their mother (Ayu Laksmi) lies in the distance on an elevated part of the stage, positioned as if she is preparing to give birth. Establishing the blood bond between the twins with their chemistry, both dancers display disciplined balance and poise, their personal connection made clear onstage. They are birthed at last as they sing their welcome greeting into the world and exit the circle of light, while four tounyes (ghosts) simultaneously arrive, ominous and snarling as they retreat to hide within a tree. 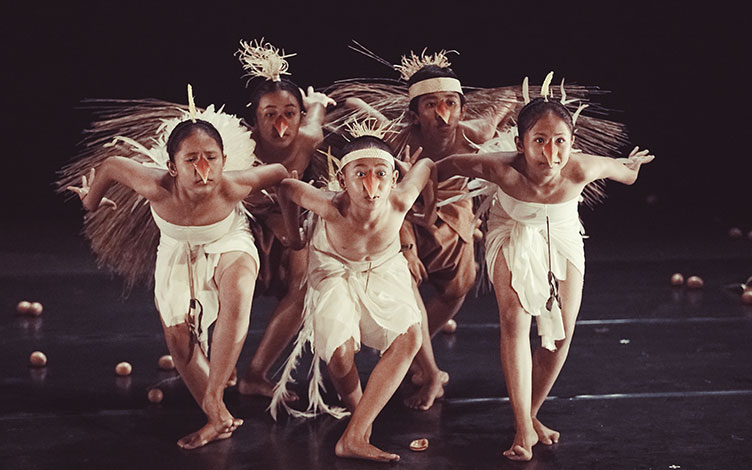 In the ensuing scenes, we watch as the twins grow up together, their youthful innocence and purity made clear as they play with eggs with each other. But it’s not long before tragedy strikes, and as Tantra approaches the tree, as daunting as it looks, he is trapped within it by an IV drip, illuminated to provide clarity on the impending issue, symbolic of his illness. As Tantri watches on, stunned by what she just witnessed, she drops the real egg, breaking it onstage. Before an entire tray of eggs follows suit from the “sky”, falling all around her to add to the drama and shock of the scene.

Unable to cope, Mother and Tantri take a bath together, where we hear the sounds of running water, as Tantri is bathed, cleansed, and surrounded by petals, as if purified. Under the light of the moon, she begins to dance, and is joined by a Moon Goddess, seemingly having entered another realm as they are bathed in otherworldly lighting. Meanwhile, Tantra remains separate from Tantri, still locked to the tree as the tounyes hold him back by force, the IV drip irremovable as he struggles as much as he can against these supernatural forces. 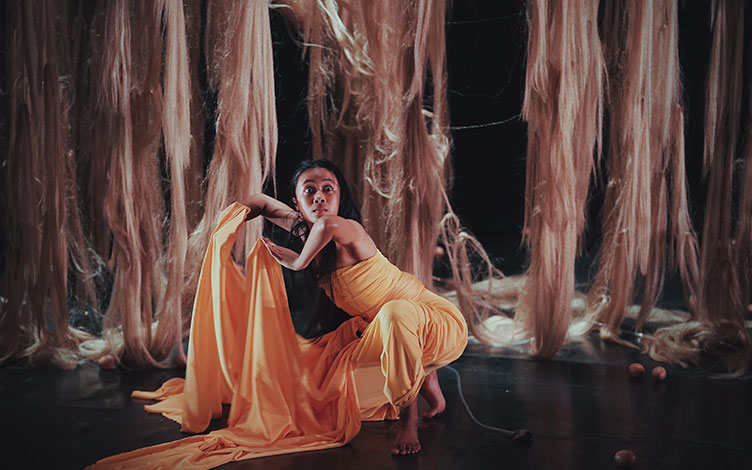 The Seen and Unseen hurtles towards its close at this point, with Mother sweeping in the distance while Tantra, weakened, gives up his last breath beside her. Feeling this, Mother sings in anguish, leaving Tantri to follow suit. But while the physical body has expired, the spirit lives on, as Mother sings on and two angels perform a dance. Hope lives on as Tantra\s spirit enters Tantri, and two become one, as they were in the womb, reunited even as one dies and the other survives. This seems to give Tantri a burst of energy, as she continues to dance, and dance, and dance, unwilling to let go as she draws strength from her brother to live on.

The Seen and Unseen is a powerful, deftly staged work rooted in symbolism and tradition, one that we were impressed by for its stellar cast of child performers fully committed to bringing Kamila Andini’s vision to life. Vividly imaginative, hauntingly poignant and brimming with surreal wonder, The Seen and Unseen moves like a restless soul looking for peace, finding comfort in belief, and leaving us hopeful of living on even after the trauma of tragedy.

The Seen and Unseen played from 28th to 29th June 2019 at the Esplanade Theatre Studio.

Pesta Raya – Malay Festival of the Arts 2019 ran from 27th to 30th June 2019 at the Esplanade. For a full list of programmes, visit their website here