Three works that prove Singapore’s dance scene is ever bold and ever dynamic.

Playing as part of the 2019 M1 Contact Contemporary Dance Festival, DiverCity acts as one of the festival’s many platforms to showcase the most exciting new choreographies and emerging talent. This year’s edition of the annual platform presents not one but three works from up and coming local independent dance artists, giving them a prime opportunity to display their skill, creativity and finesse. 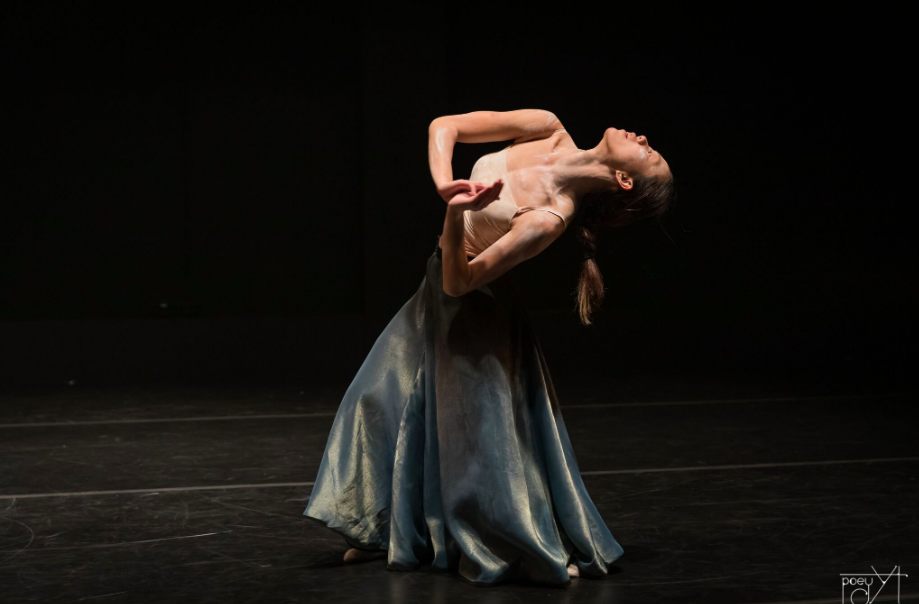 DiverCity opened with Amelia Chong’s NAMUH, a work that was first presented last year as part of M1 Contact’s Off Stage. Now further developed after being presented at Brisbane, NAMUH is a solo performance by Chong as she uses her body to explore the human form’s complexities and strangeness. Chong emerges from under a black tarp, an already strange start that invites us to pay closer attention and investigate who or what exactly is ‘Namuh’. Much of the performance is reliant on Amelia’s skill, using her dynamic choreography to show off her flexibility as she forms different shapes and structures accordingly to the soundtrack.

As Amelia leaves the tarp behind and stands at her full height, we are now fully aware of how tall she is. As she forms increasingly weird shapes and twists her lengthy body around, at one point even moving robotically before her system ‘short circuits’, we are discomforted by the oddity of the human body. With all these unorthodox movements, one becomes privy to the many creative ways in which Amelia manipulates her body, forming fascinating images and riveting visuals. Retreating into her tarp, it seems as if she has retreated back to the safety of a shell. While inside, it is now her long legs that perform the choreography, peeking out while the rest of her body is obscured, as they continue to move and tell a story of this strangeness and charm of the human body, before the lights fade out. 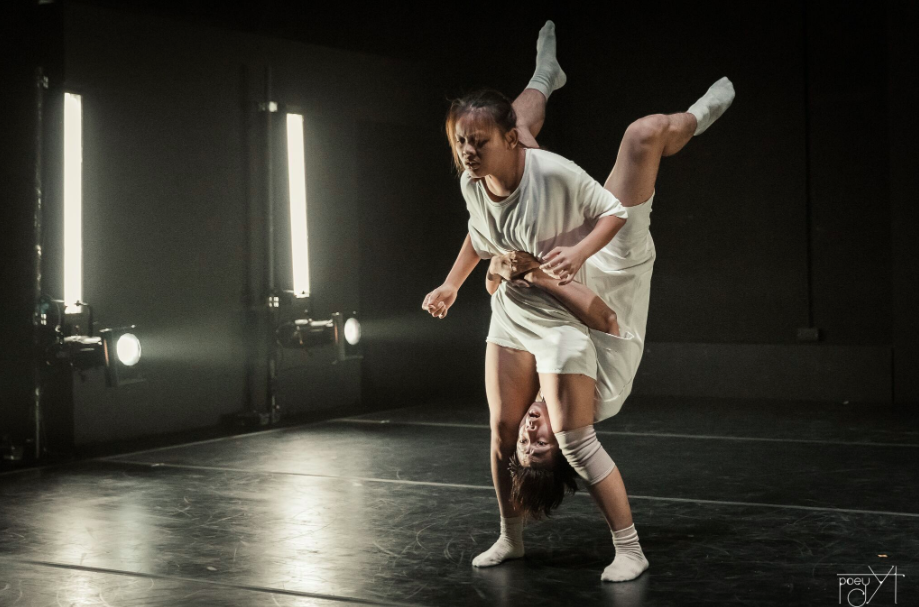 In Edwin Wee and Rachel Lum’s DBL.TAP, the duo explores the phenomenon of social media addiction, taking its title from our culture of obsessively liking photos on Instagram, as it questions our increasing disconnectedness in a supposedly golden era of connectivity. The performance opens with Edwin and Rachel holding on to each other in a tight embrace, representing our supposed closeness to others. Both dressed in white gowns, the dance begins as they separate from each other, performing jerky movements, which, together with the scratchy, distorted soundtrack (Raime’s Exist In The Repeat of Practice), seems to suggest the cracks starting to appear the more we use social media. One imagines that the two are in a facility of some sort, in rehabilitation for their addiction.

Watching Edwin make repetitive movements as he moves across the stage from left to right, reminding one of swiping left and right on Tinder, the relationship between both dancers becomes strained, as they move to embrace but end up struggling, pushing away from each other. Attempting to perform synchronised movements with each other, their movements are fast and frenzied as if trying desperately to keep up with the current trend. As Raime’s Do I Stutter? plays in the background, we hear the words ‘I think I went too far’ repeated, and we wonder if we truly are in control of our actions online, and how much of us is still us.

As Rachel lifts Edwin up on her back, it seems as though he has become a burden. Breaking free from this, the two separate and begin dancing again even after the music has stopped. Both Edwin and Rachel display pinpoint execution with every rapid, demented movement, a technically and physically demanding choreography that makes it seem like they’re still competing with each other. We think about the false relationships we share online, the idea of competing for likes and followers at the back of our mind as the two dance themselves into a trance-like delirium till they drop, exhausted from the stress of social media and a warning to all. 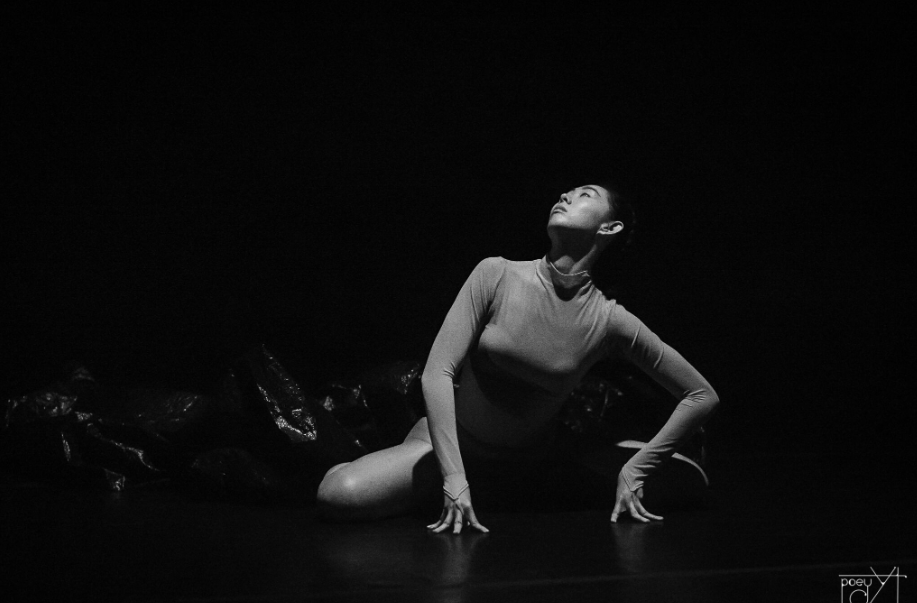 DiverCity ended with Adele Goh’s solo performance, Disappearing Act, created in collaboration with Germaine Cheng. Exploring issues of the body, this final act reclaims it in all its power, joy and necessity. From the moment the performance begins, we see a dress hanging in the distance, while Adele sings along to Daniel Pemberton’s grand “The Circus Of Machines II (Allegro)”, celebratory and parade-like, her movements concise, tagged and synced to her orchestral soundtrack. Playing with ideas of space, the dress becomes the centre of attention as the music grows softer the further she gets from it and vice versa. The dress is a representation of the physical body, while Adele as a performer represents the inner self, as she attempts to reconcile with the dress and reconnect with it.

Disappearing Act is essentially an abstract work, focusing on Adele’s onstage presence as she uses her body as a site of emotion. Her torso undulates smoothly as she breathes in and out, finding a steady rhythm before finally taking the dress down and wearing it. The soundtrack moves to rise again with Shaker Loops (1983): A Final Shaking, triumphant as the spotlight comes on and she finds the rhythm once again. We see the perseverance on her face as the melody rises, before shifting away towards the static, with songs like Ryuichi Sakamoto’s Walker and Frank Bretschneider’s White Light. Adele begins to slow down and fade, disappearing into the darkness, as the internal self has resolved its relationship with the body.

With DiverCity then, one is left impressed by these young dancers’ singular aesthetic and breadth of imagination as they take abstract or familiar issues in society and brings them to life via dance. Their bodies become essays, their movements stories of the things that concern them most and occupy their thoughts, and we cannot help but be drawn in to each piece, feeling a connection to them with each intimate, precisely choreographed performance.

DiverCity played on 3rd and 4th July 2019 at the Esplanade Annexe Studio as part of the M1 Contact Contemporary Dance Festival 2019.