Highlighting communication breakdowns in the light of the setting sun.

Returning to the M1 Contact Festival once again since its inception in 2017, Dance at Dusk remains one of the festival’s most important, accessible free programmes reaching out not only to curious families, but also, to the differently abled, who may not be able to appreciate dance in the same way the able do.

Working together with Access Path Productions, Dance at Dusk, performed at the Esplanade Outdoor Theatre, provides an alternative to simply watching the performance. Instead, as introduced by emcee Ma Yanling prior to the performance, the seeing-impaired can instead tune in to an auditory version of the performance, where one appreciates the soundtrack and understands it with rich description in one’s ear.

Which makes complete sense then, as this year’s edition of Dance at Dusk features T.H.E artistic director Kuik Swee Boon’s Silence, first commissioned by Esplanade da:ns Festival in 2007. Performed by T.H.E Second Company, the contemplative work deals with issues of communication breakdown in our modern world, and reminds us how we are often overloaded with information in today’s age, often forgetting to tune back in to what really matters – the human connection. 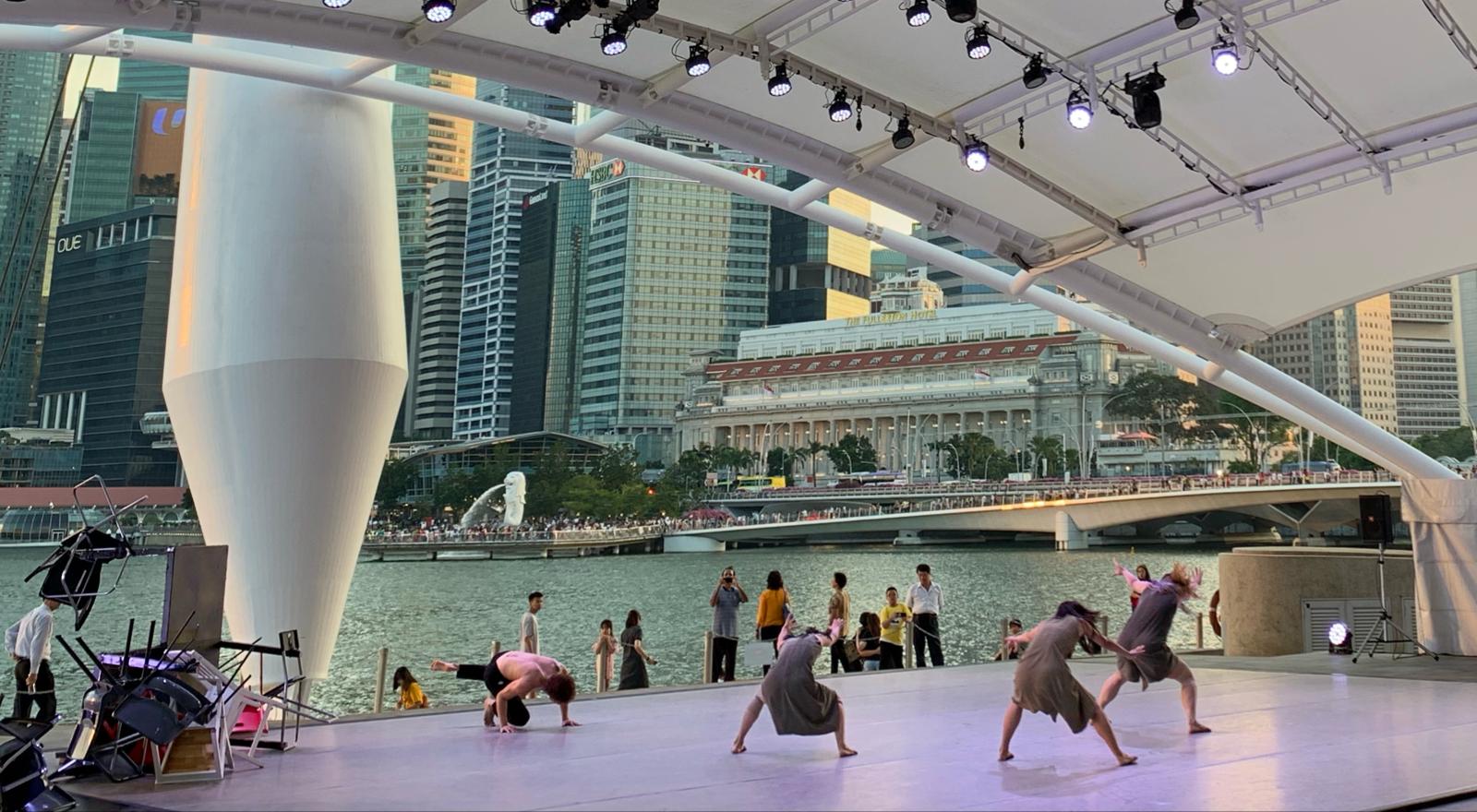 Comprising three segments, Silence begins with all eight dancers (Eunice Wee, Fiona Kwek, Goh Jiayin, Lynnette Png, Koh Zong Qi, Jackie Ong, Shawn Tey and Shaun Lim) as they don hoodies, gazing off into the setting sun in the distance at the marina. There is the sense that there is some kind of distance between the dancers, so close yet so far spiritually from each other.

The performance begins with warm lighting, as three dancers attempt to synchronise their movements with each other. There is the simultaneous sense of both synergy between them and lack thereof, as one of the three falls out of order and begins to act out, seeking attention and desperately trying to be noticed. In her efforts, she almost stumbles, approaching the other two dancers and gazing down upon them to assert her presence and dominance, a high and mighty air about her.

In the corner of the stage, we see a mound of chairs and paraphernalia, representing the clutter in our lives, constantly there yet refusing to clean it up and deal with it. We think about how we are often caught up in some kind of tunnel vision, aware only of the short-sighted view of things before us and ourselves, but not the people around us. We feel and fear the distance that we unwittingly create as we progress only to serve ourselves, rather than caring about the people around us, turning a deaf ear and blind eye to their feelings, leading to a communication breakdown. 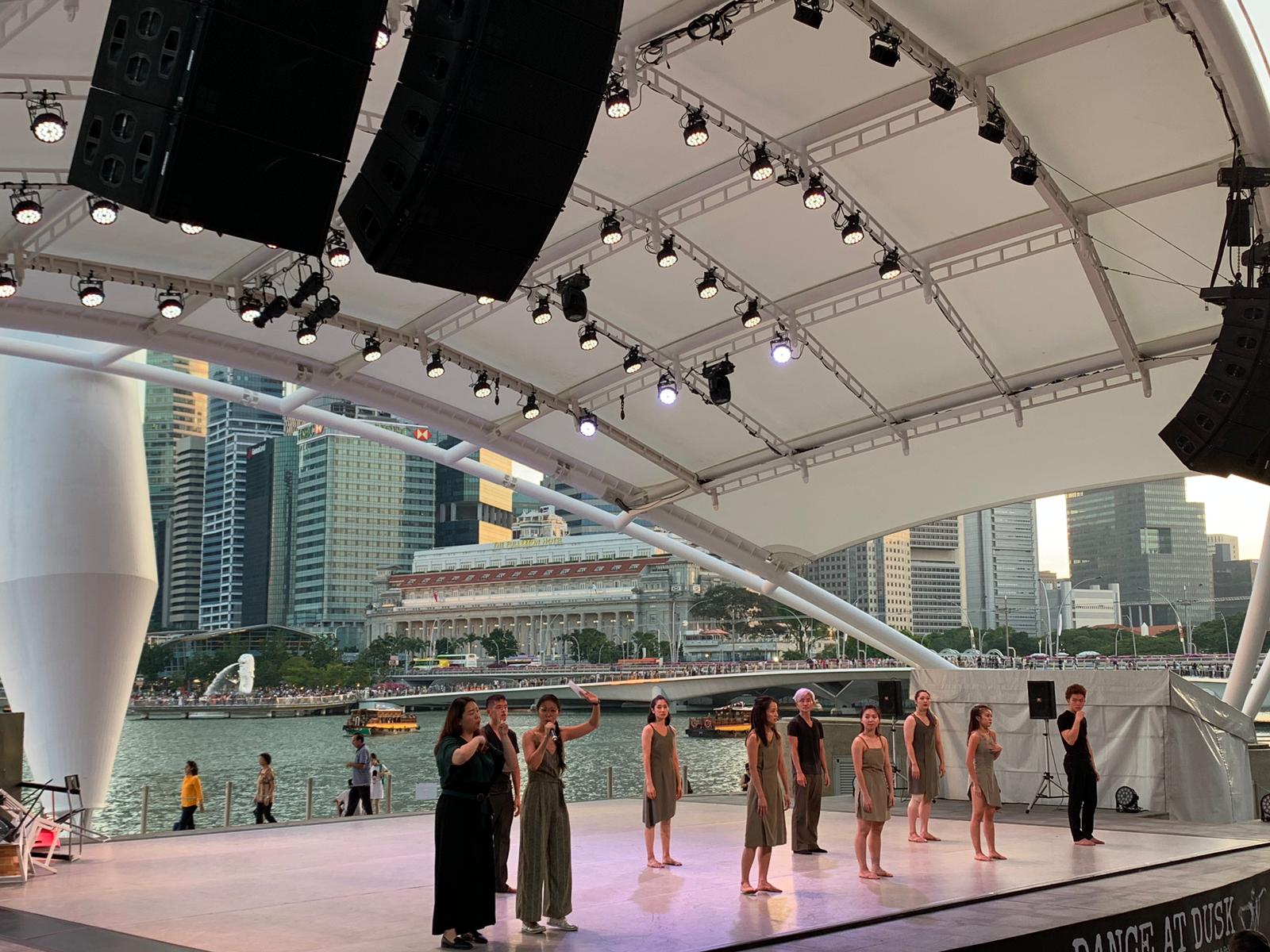 Watching a couple stare out of a metaphorical window, one is reminded once again of this spiritual removal from life itself, distanced from reality. As a group of dancers emerges, one female dancer stands out, trailing behind and attempting to follow in the rest of their footsteps. While the walk in the same direction, they are walking forwards, while she is walking backwards, at odds in her inability to get with the crowd. We hear the soundtrack become staticky over the speakers, suggesting a sense of displacement and disruption as we become disoriented. A male dancer jumps up in frustration,  in confusion, and we wonder, if that is truly how we live each day. 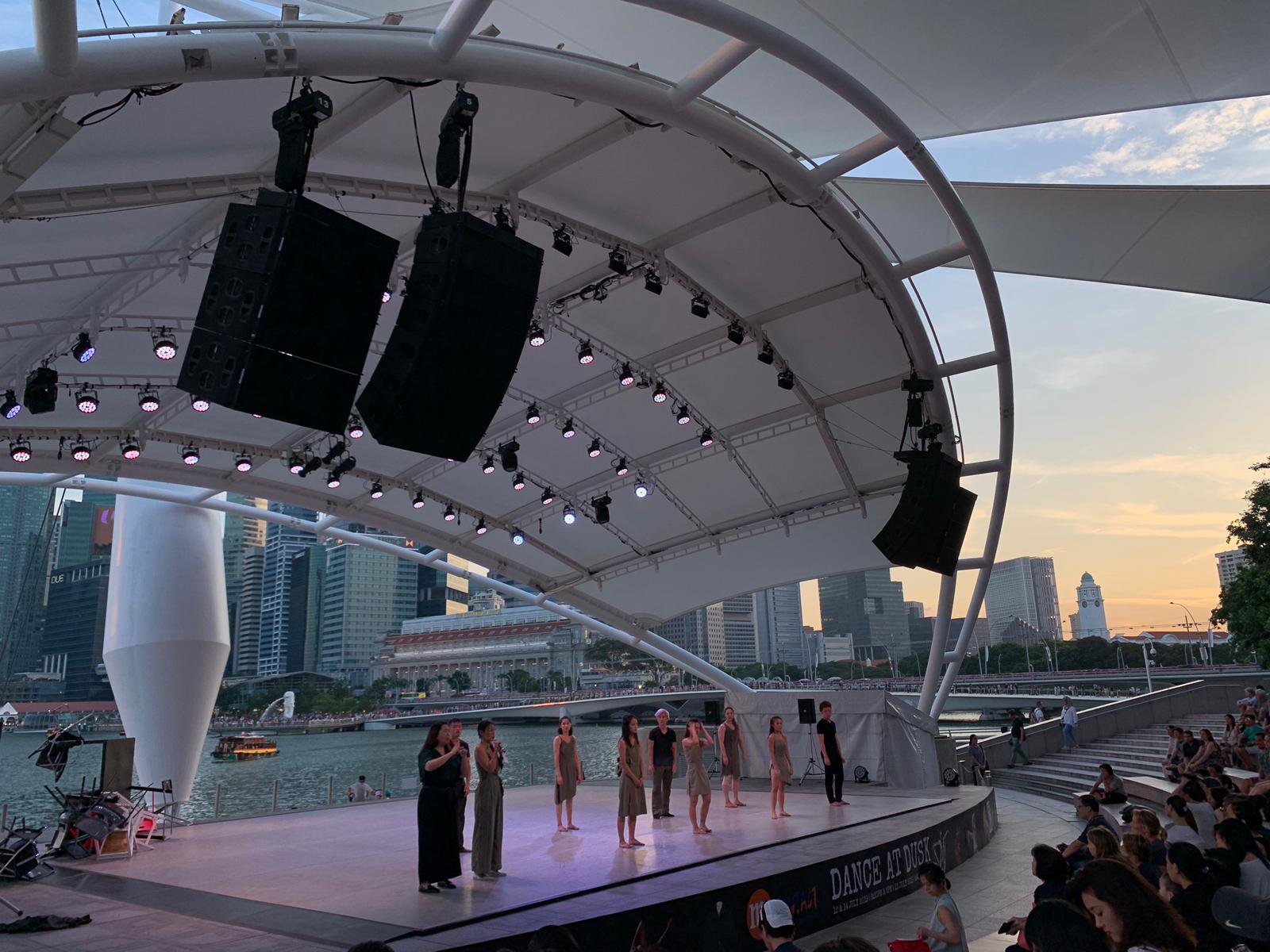 As we reach the end of the show, three female dancers emerge, almost as if they have found the freedom they so seek. Yet we still see a lone dancer left behind, her face displaying an expression of hurt, loneliness and fear as Silence reaches its end. In our modern, rapid lifestyle, as much as become caught up in our own lives, we forget those that are left behind, a cruelty that emerges from our tunnel vision of progress. We take in the information, overstimulated by everything around us, and forget to read in between the lines. It’s no wonder Silence has become one of T.H.E’s signature choreographies, showcasing in full the dancers’ strong breathing technique and embodying life itself in all their movements, reminding us to slow down, take a step back, recentre and reconnect with the real world all around us.

Dance at Dusk played from 12th to 14th July 2019 at the Esplanade Outdoor Theatre as part of the M1 Contact Contemporary Dance Festival 2019. Admission is free.