Site-specific multi-room food and dance experience that leaves us more than satiated.

House 18 Temenggong Road is a typical black-&-white house from the old days, one filled with so much history that one would swear it’s imbued with countless ghosts of the pasts residing in its walls. Newly refurbished, it seems only appropriate then that it be the site of Project Plait’s newest production – The Mem’s Servants, as the site-specific dance/dinner experience delves into the untold stories of servants past.

Set in 1921, The Mem’s Servants takes place as the British Empire is being built at full steam. Housing a British serviceman and his family, known as ‘Tuan’ and ‘Mem’, the house exists in a time before plumbing, gas stoves and electricity, making the family highly reliant on their servants to keep the home spick and span and in order. We are later made privy to the lives of the cookie (cook) and the amah (nanny), performed by Alvin Toh, Natalie Lin, Mandy Tan and Jash Foong through dance, as choreographed by Naomi Tan, and food by chef Nixon Low, as we wander through the house’s many rooms. 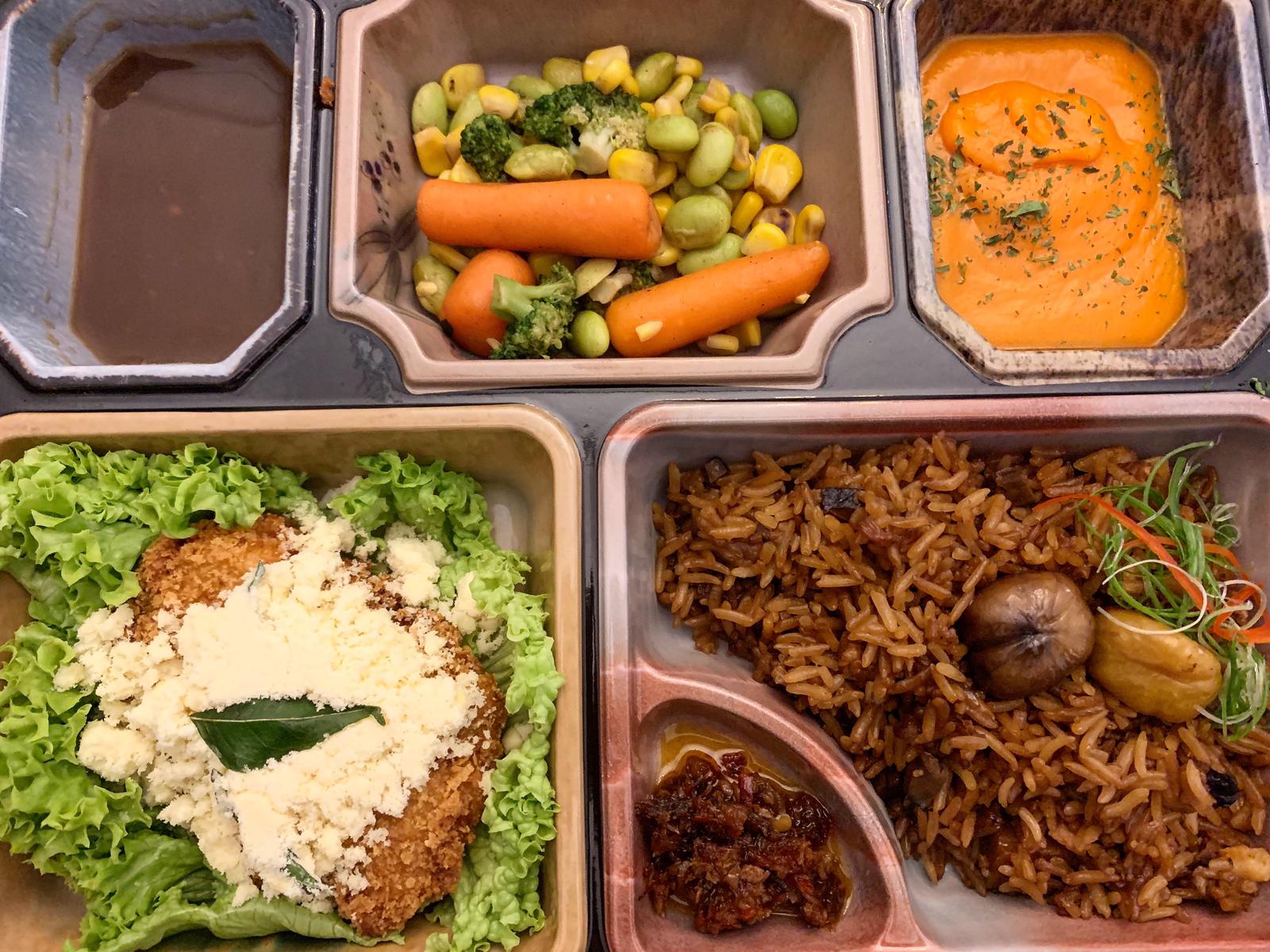 We begin by watching as the amah prepares milk for a child with milk powder and hot water. One could see how she then reveals she is caring not for just one child, but two. We think of the hardships one goes through during those difficult times, and the importance of milk powder for nourishment, often an expensive commodity in those days. It makes sense then, that the dishes we are served come in a bento box, comprising ‘Ah Boy’s Milk Powder Fried Chicken’, ‘Tuan’s Fragrant Yam Rice’, ‘Ah Girl’s Baby Vegetables and Carrot Puree’, and ‘My Leftover Daily Coffee’, showing the contrast in servants’ quality of life in relation to her masters’. 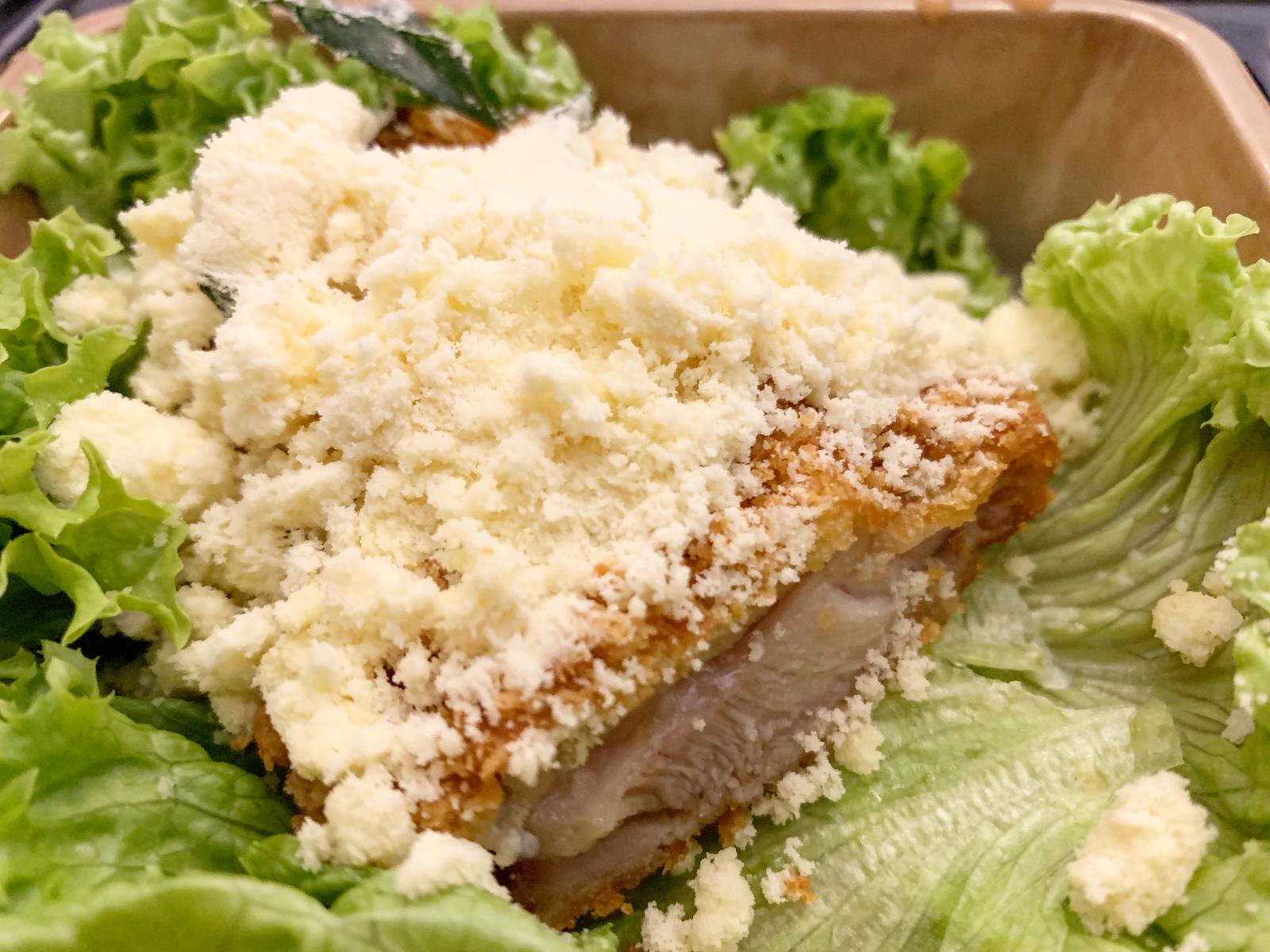 As the scene plays before us, the same dancer performs behind a screen, similar to wayang kulit puppetry, before emerging from behind. Representing the amah, the dancer looked like she’d been through some tough times, and it was evident she was willing to do anything for her family, as she packs up some family photos, with the way she embraces them, considers family her number one priority and source of strength for her to get her through each day. 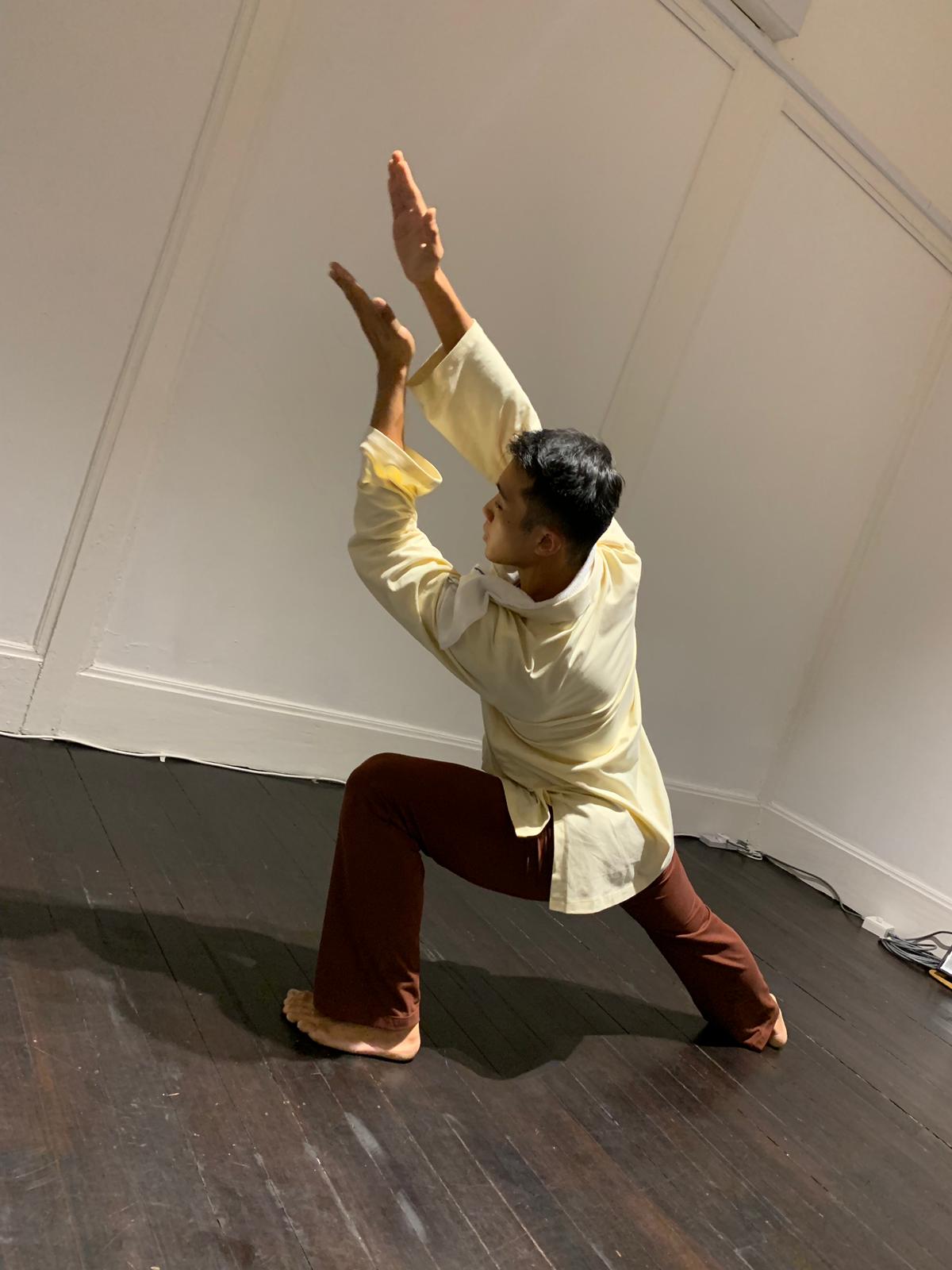 In the next scene, after sitting down, we are then given some instructions, where we’ll ‘help’ the cook accomplish his recipe. We were each given a chance to tell the chef what was the nex step in the recipe, which the dancer/cook would perform. When the recipe was complete, he would then do a complete dance to represent finishing the recipe. This was a great way to get the audience involved and interact well with the production. 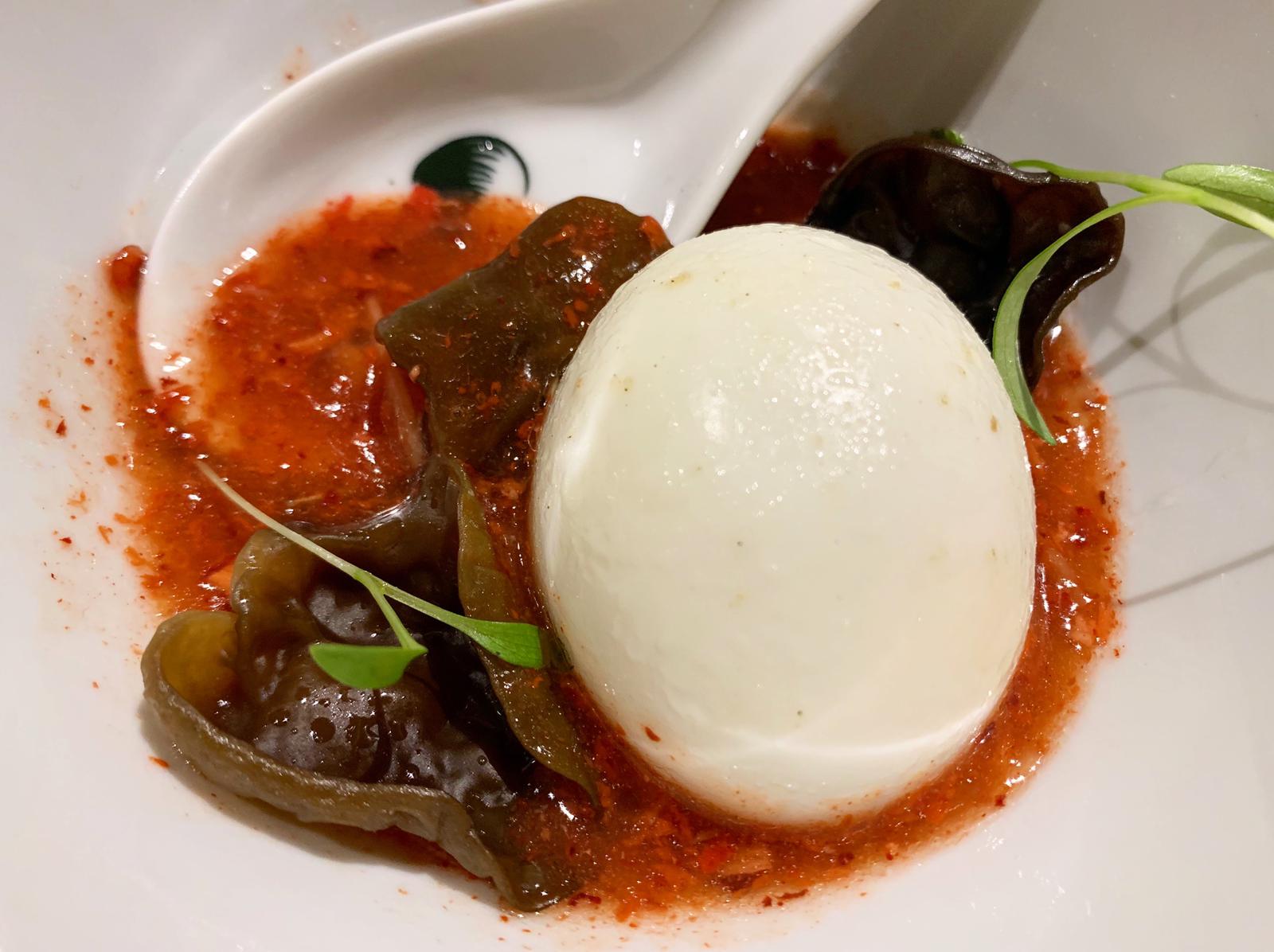 Here, we were served two versions of hong jiu ji (red wine chicken) – one, a traditional one in a bowl with hongjiuji and a 63 degree egg cooked to perfection, with the yolk flowing out beautifully. It takes a lot of care and precision to peel these eggs carefully, and maintain the integrity of the eggs, showing how much effort Project Plait puts into presenting their dishes. 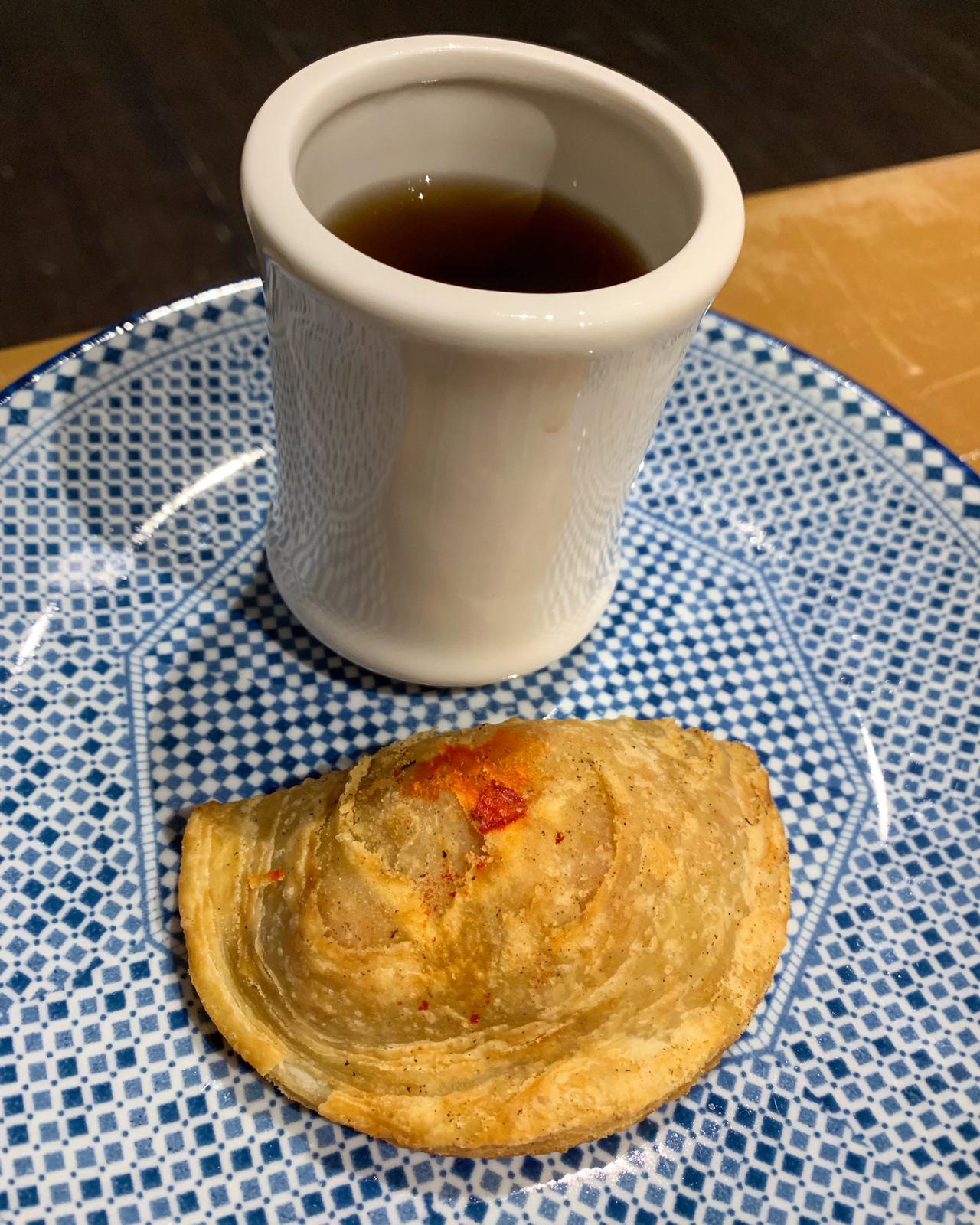 The second way was served like a pot pie, alongside a hot longan red date drink. Usually one would enjoy pot pie with tea, but has been now reinvented as such, and we enjoyed it thoroughly. It was interesting to see two different interpretations of the same dish – a traditional one and a modern one. 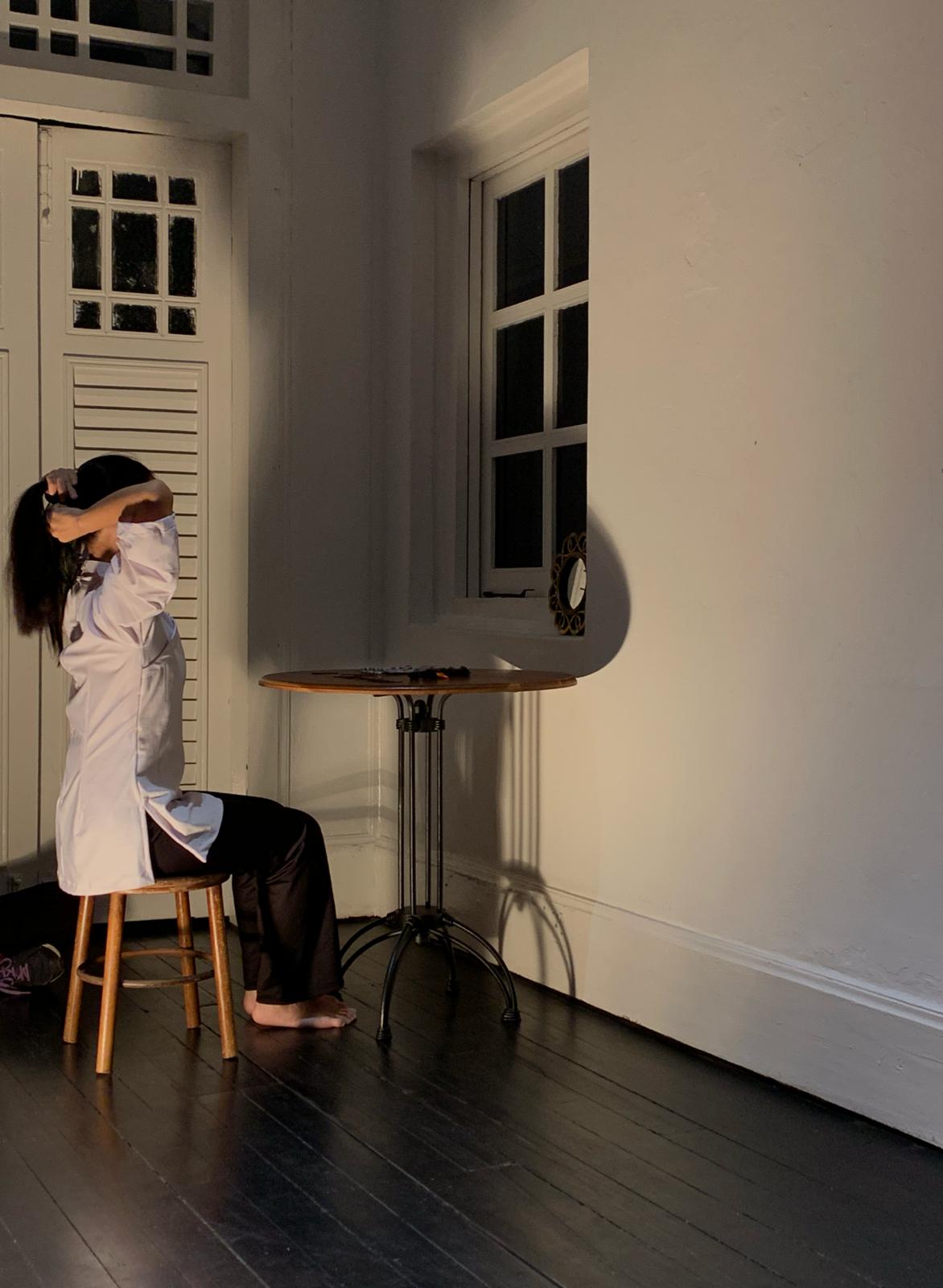 As we move to the next room, we watch an emotional scene as a young version of the amah, pre-servitude, as she begins the process of ‘sor hei’, or bunning her hair with a flower hairpin through it as a symbol of a vow to never get married from a tender age. Through Naomi’s choreography, one could see the many emotions that went into each movement and facial expression, and even with the difficulty of an unusual space, managed to use the lighting and sound to her advantage and illuminate all that was going on in front of us. 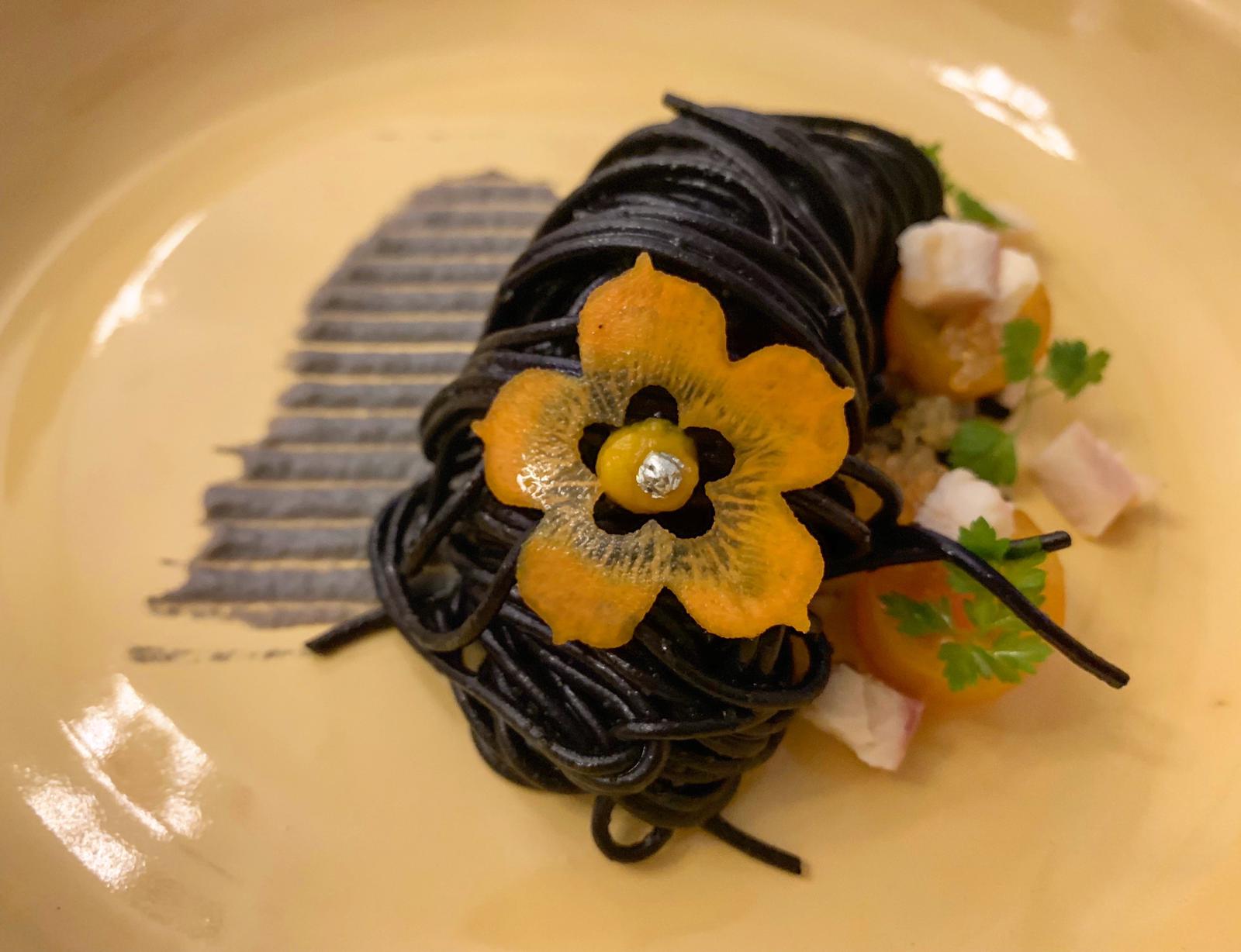 The amah ends by wrapping her flower hairpin in a handkerchief, taken from a hairpin in her hair, before we see the same flower come out again in our next dish – chilled squid ink angel hair pasta, with smoked golden trout, golden tobiko and combed ‘aged’ cauliflower puree, along with the fragrant aroma of truffle oil. It was good planning to see the symbolism of the flower repeated in both performance and food, and to be reminded of the sacrifices the amahs of the past had made by recreating their signature hair in the dish. 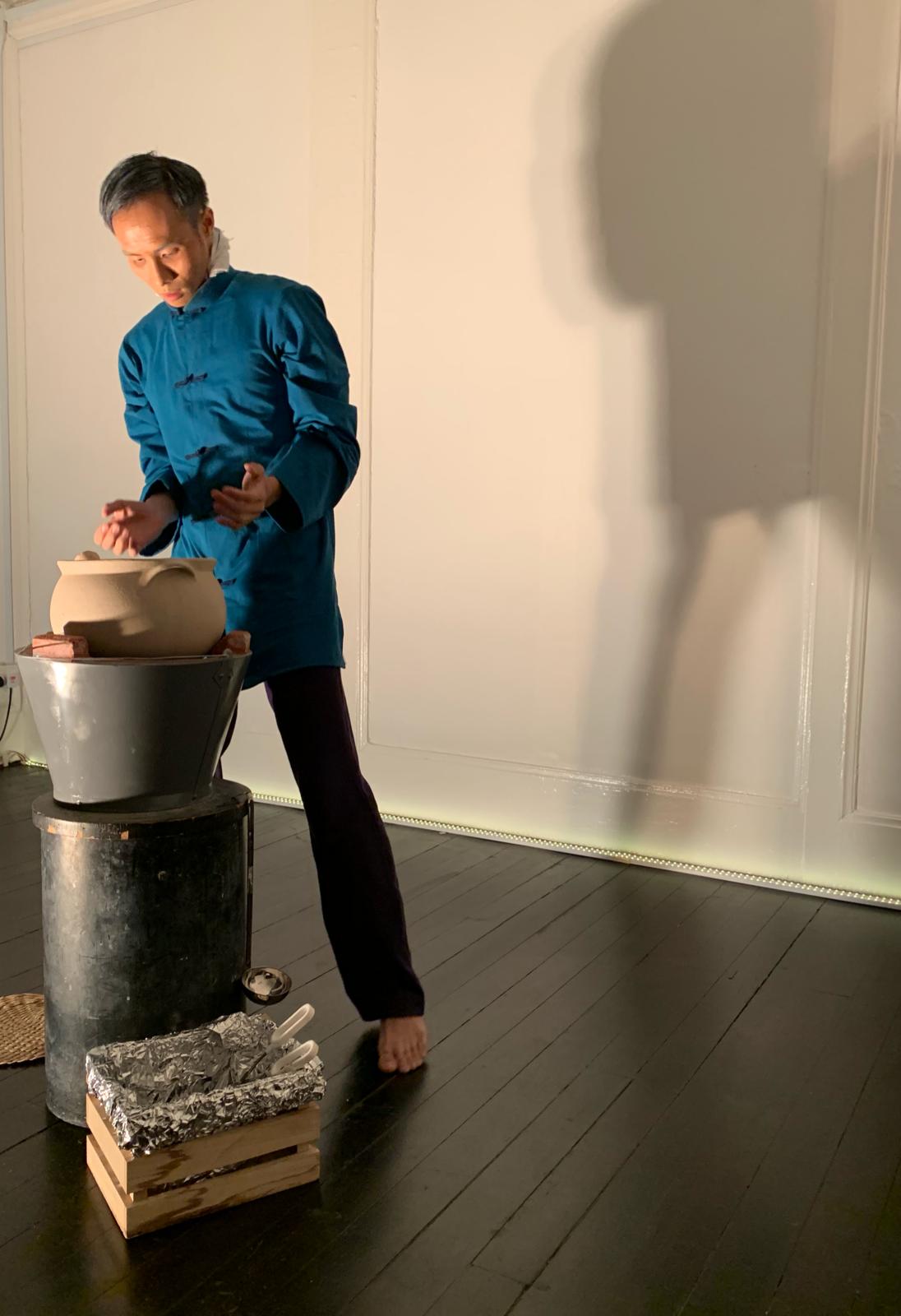 In the next scene, we are then introduced to the cook, in his younger days was vibrant, energetic, cooked the dish fast and with gusto, and one could see there were specific steps choreographed to make the dish. With a simple change in lighting, the cook then ‘ages’, as he revealed greying hair and wrinkles, yet, maintains the same steps it takes to cooking the dish he performed in his ‘younger days’, never missing a beat. We are reminded of the older members of our own families, and how they themselves repeat the same recipes they learnt in their youth till today – going by gut feel alone, they’ve perfected their own recipes, never needing to measure how much salt to use beyond a pinch, yet always ensuring that those same dishes taste exactly the same, year after year. 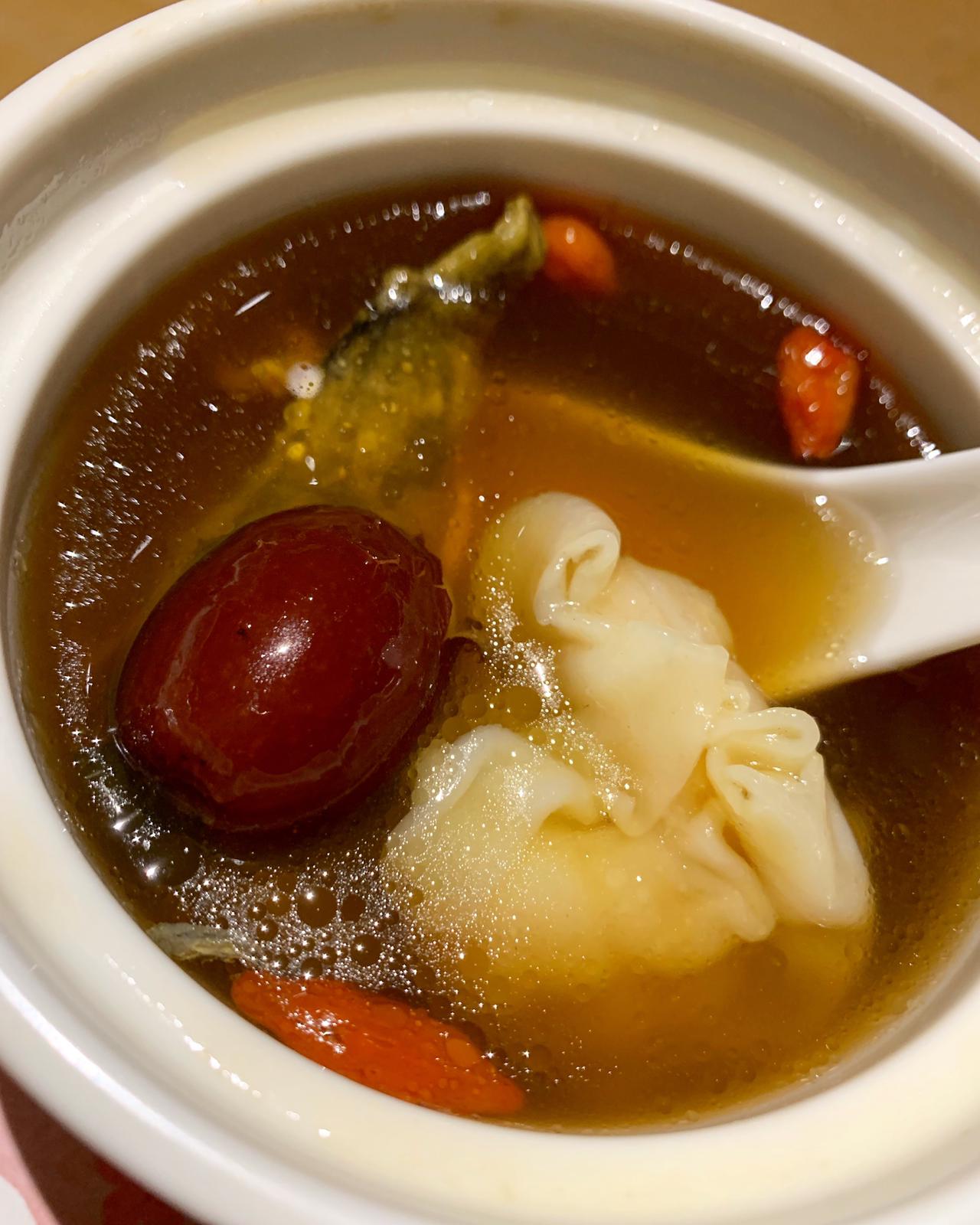 At every phase, the cook saves money by putting it into an envelope – coins at first, then notes, all for the sake of saving for the future and for the family he himself might have one day. Like this act of saving, we are served a rich, lotus root soup, with great ingredients such as black chicken, cordyceps mushrooms, a shrimp wanton, where the shrimp inside was seasoned well with rich sesame oil, and even collagen. These different tastes and textures come together to form a truly exquisite dish, and kudos to chef Nixon Low for making sure each and every dish is done so well. The soup in particular is an inspired choice – just like how the more times one boils a soup it gets older but richer, so does the ‘cook’ as he keeps up his steps and works for a living to better his life. We are given a note, and read that the cook has passed on the mantle to his own son, as he grows weary and tired at last. 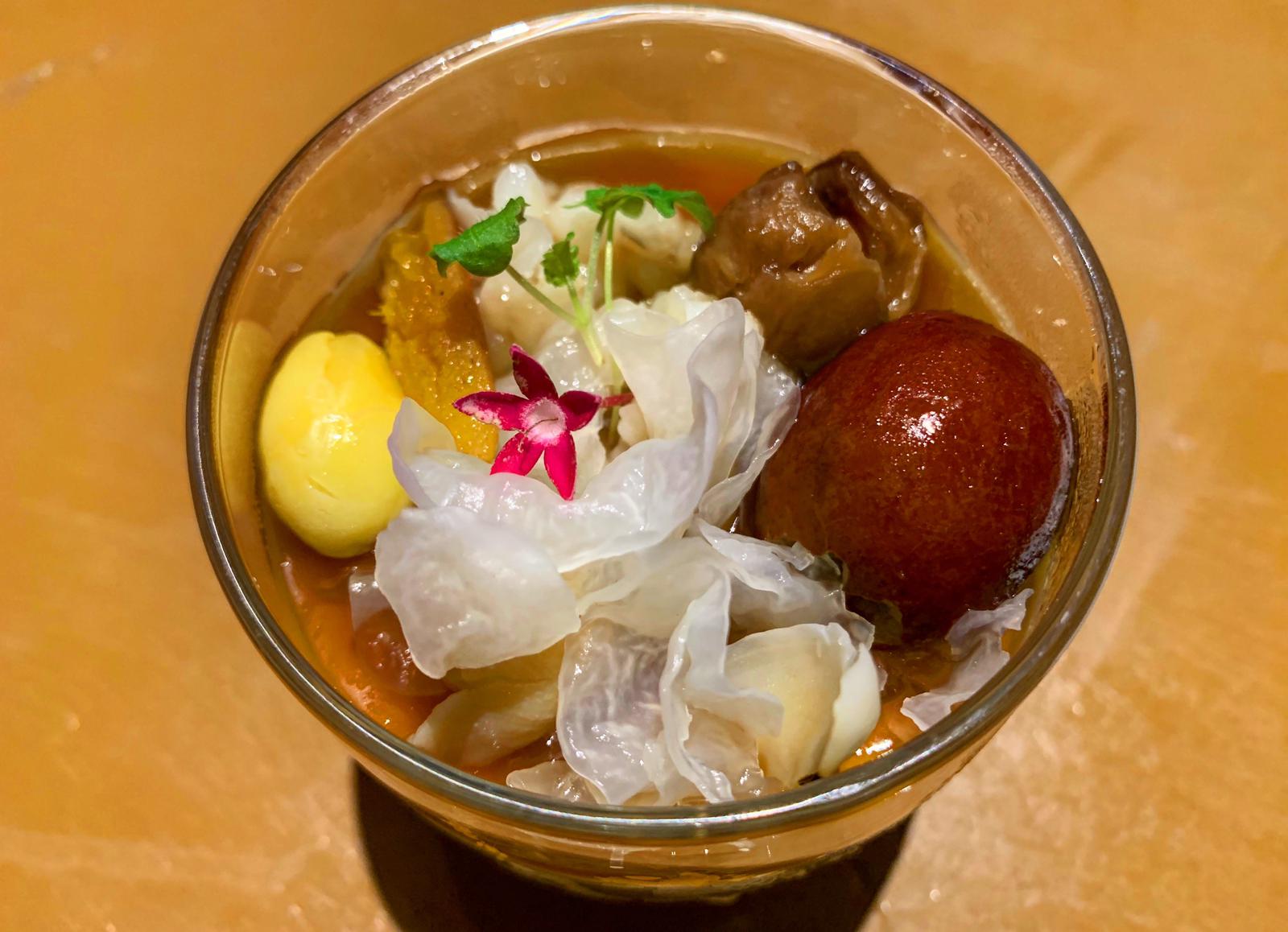 In the final segment of the night, we watch as the older servants now come face to face with their younger selves, looking at each other and their surroundings. They seem to be thinking of the place they used to stay and work at, and how much has changed in the time that has passed. We are caught between time, while the servants have aged rapidly, their world changing beyond imagination as they lived out their lives. 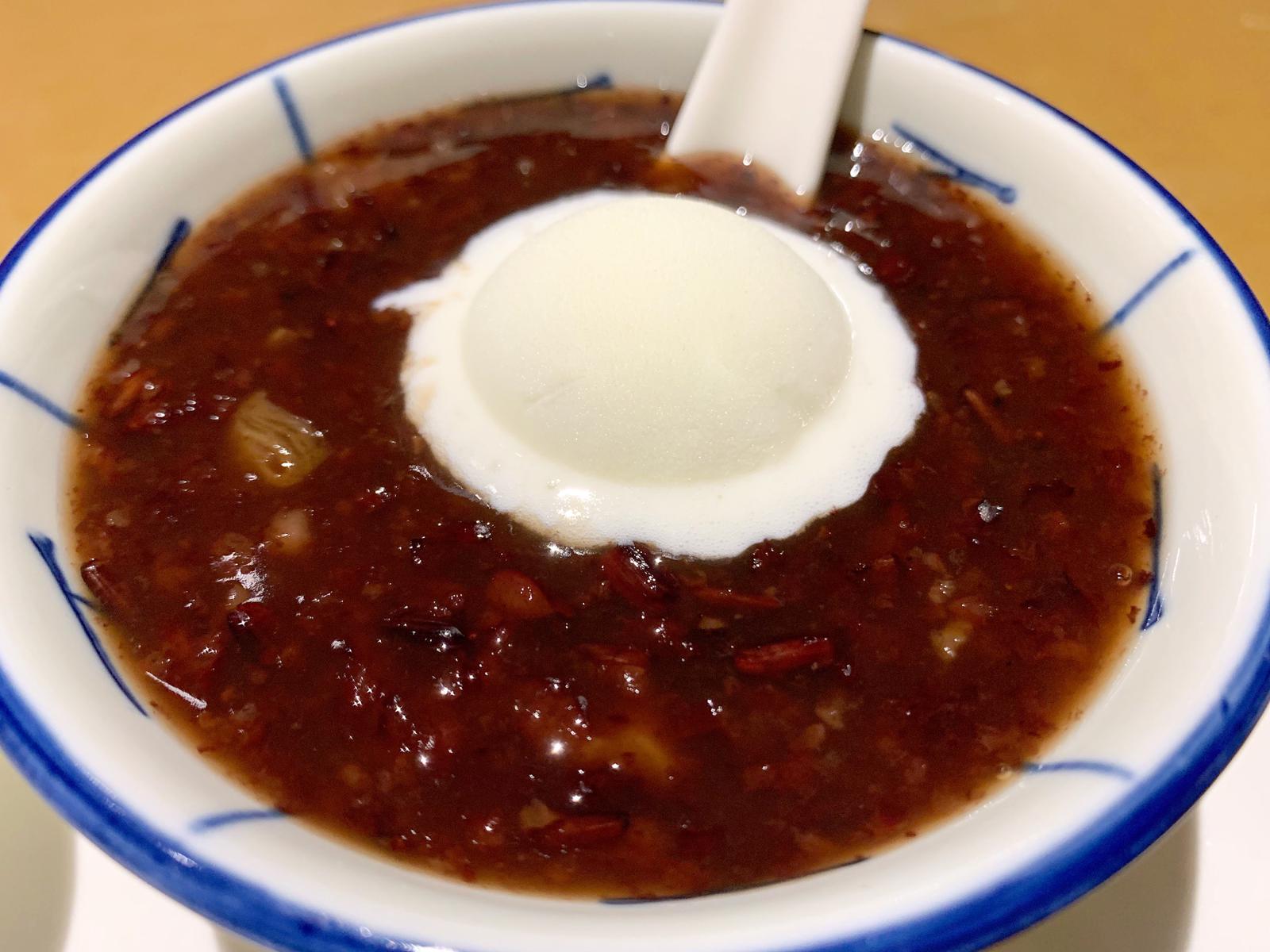 Dessert then, comes in twos – the first, a black glutinous rice dessert with liquid nitro coconut ice cream, along with a ‘cheng ting’ (in the form of a longan emulsion) and milk panna cotta. One thinks of the coming together of the old and the new, with these traditional desserts (cheng ting and pulut hitam) given a modern twist with the introduction of the nitro coconut ice cream and the longan emulsion/panna cotta. In a sense, we’ve also come full circle, as the milk powder we see at the start comes back to us in a new way (in the panna cotta and ice cream), and that as much as the past is in the past, it still lives on in new forms even today.

With The Mem’s Servants then, Naomi Tan and Nixon Low of Project Plait have taken their art a step further as they present tighter choreography, maintain their high standard of cuisine, and present a compelling, emotional storyline anyone can easily relate to, that leaves us satisfied with both a sense of catharsis and gastronomic satisfaction. The atmospheric environment of 18 Temenggong imbues the production with a strong sense of national history, and one is able to appreciate the unsung stories of the many lives that go unrecorded, in our grand Singapore story from the 1920s to now.

The Mem’s Servants ran from 24th to 27th July 2019 at 18 Temenggong Road, Singapore 098771 as part of the 2019 Singapore Food Festival. For more information, visit Project Plait’s website or Facebook