How does a student in Singapore encounter and understand the poverty that’s hidden all around them? Students from Anglo-Chinese School (Barker Road) and Anderson Secondary School have been given the chance to present their pieces created specially for the M1 Peer Pleasure Youth Festival to a public audience, having each performed a version at the Singapore Youth Festival. Each boldly tackling the timely issue of poverty, as seen from students’ perspectives. 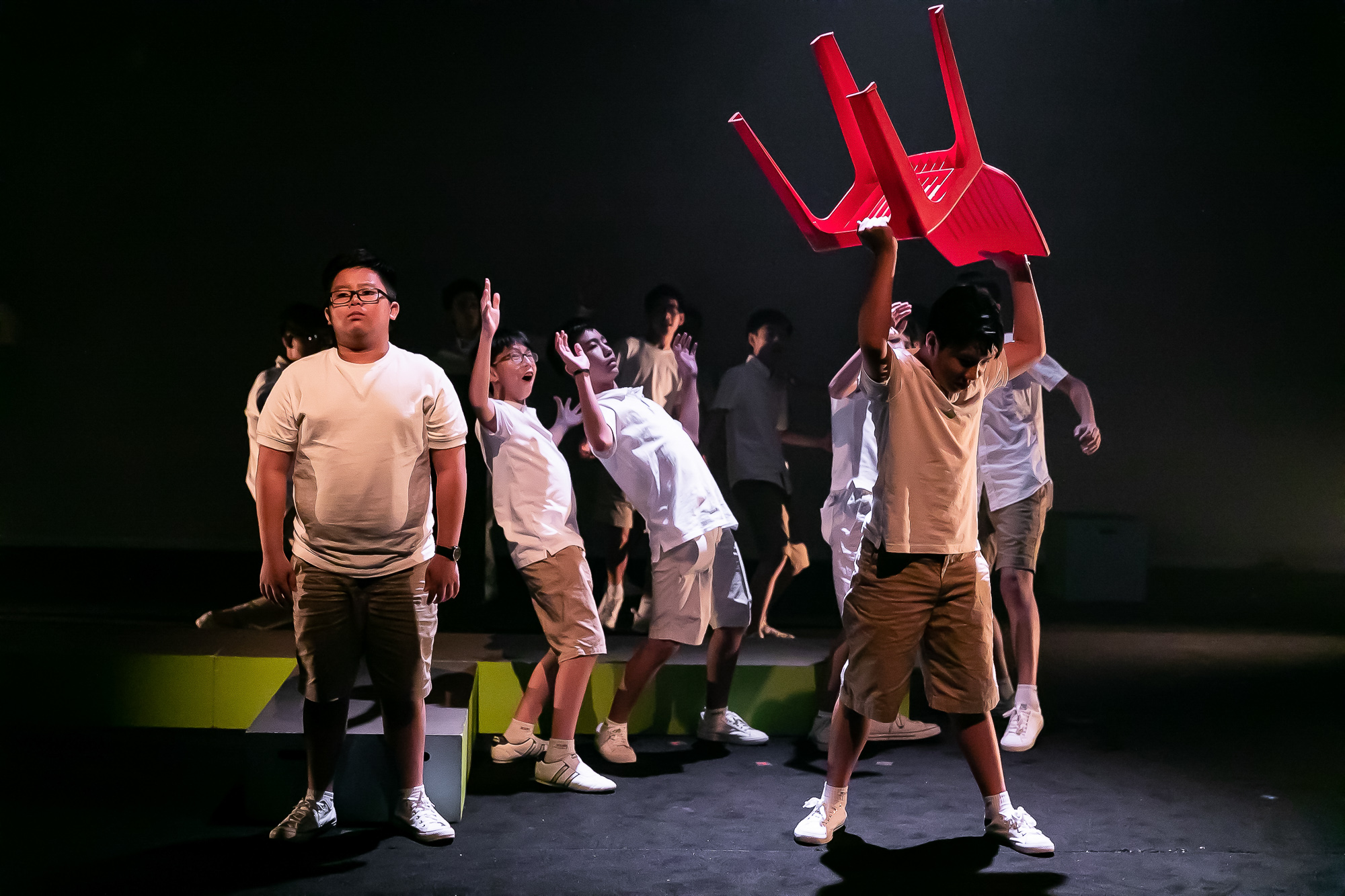 Anglo-Chinese School (Barker Road) opened the double bill with The Ground, following a single father as he meets a boy about to take his PSLE exams at a strange intersection where time and space are suspended. The piece begins with the actors playing students gathering for morning assembly, complete with parade commands and even reciting the pledge, reminding audience members of our country’s goal of creating a ‘democratic society based on justice and equality’. Both lighting and sound design are done relatively well, spotlighting characters as necessary, while the soundtrack sets the tone well, bringing out the mundane nature of school life. 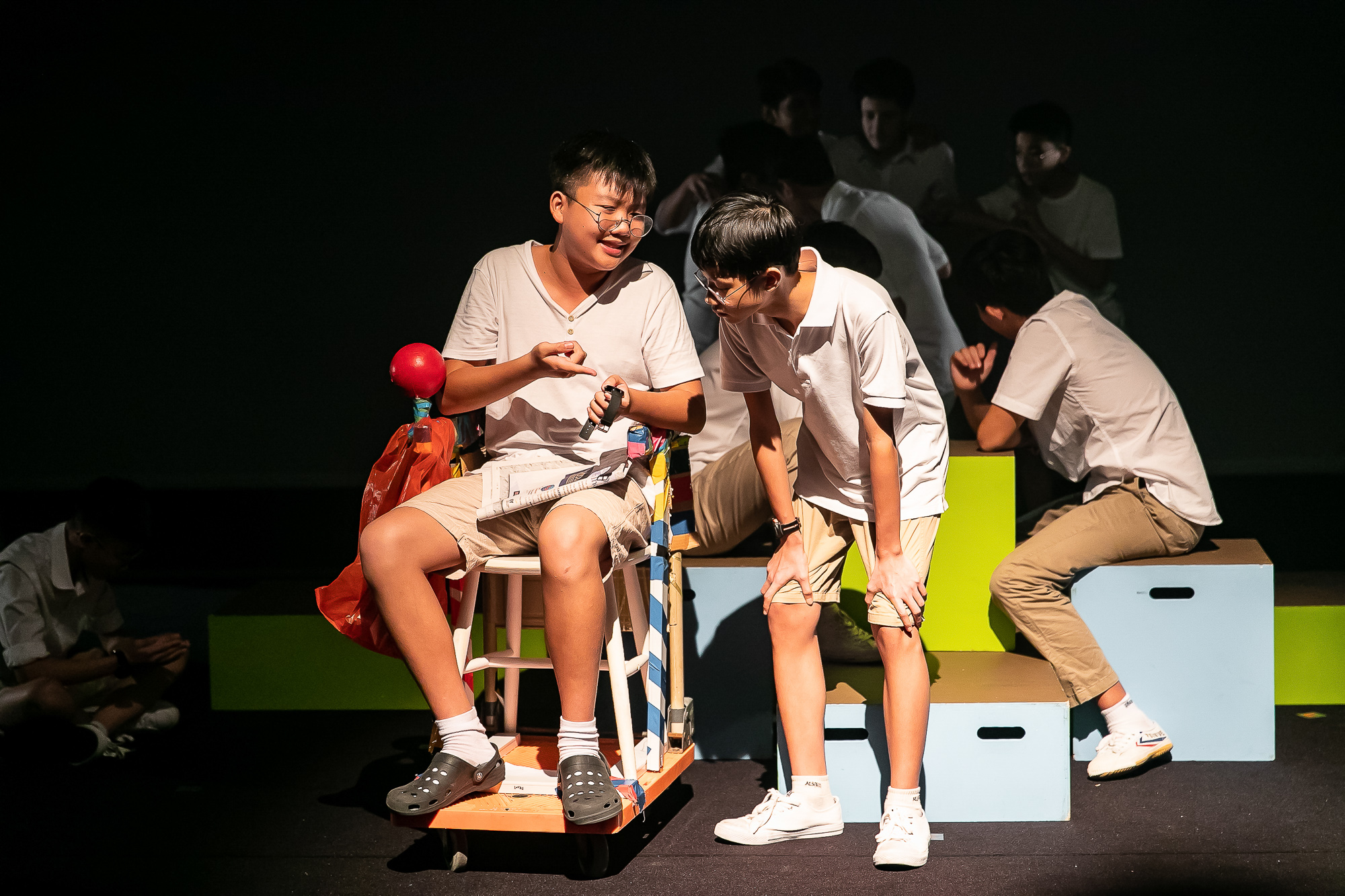 We hear from various students as they share some of their personal anecdotes, from a history of coming from a lower-tier kindergarten, to a family with a low education, to the stress of streaming and not being able to get into the school they want, affecting the way they see themselves in comparison to others in society. One student even reveals his being diagnosed with dyslexia in Primary 1, and the struggles that followed as he attended extra classes just to keep up. Meanwhile, the audience is also introduced to a play-within-a-play, where four masked characters speak to each other in an incomprehensible language. Despite wearing the same mask however, their ‘teacher’ constantly singles out her favourite student, no doubt familiar to anyone remembering their school days, showing just how much inherent bias is already in society and the difficulty of overcoming it. 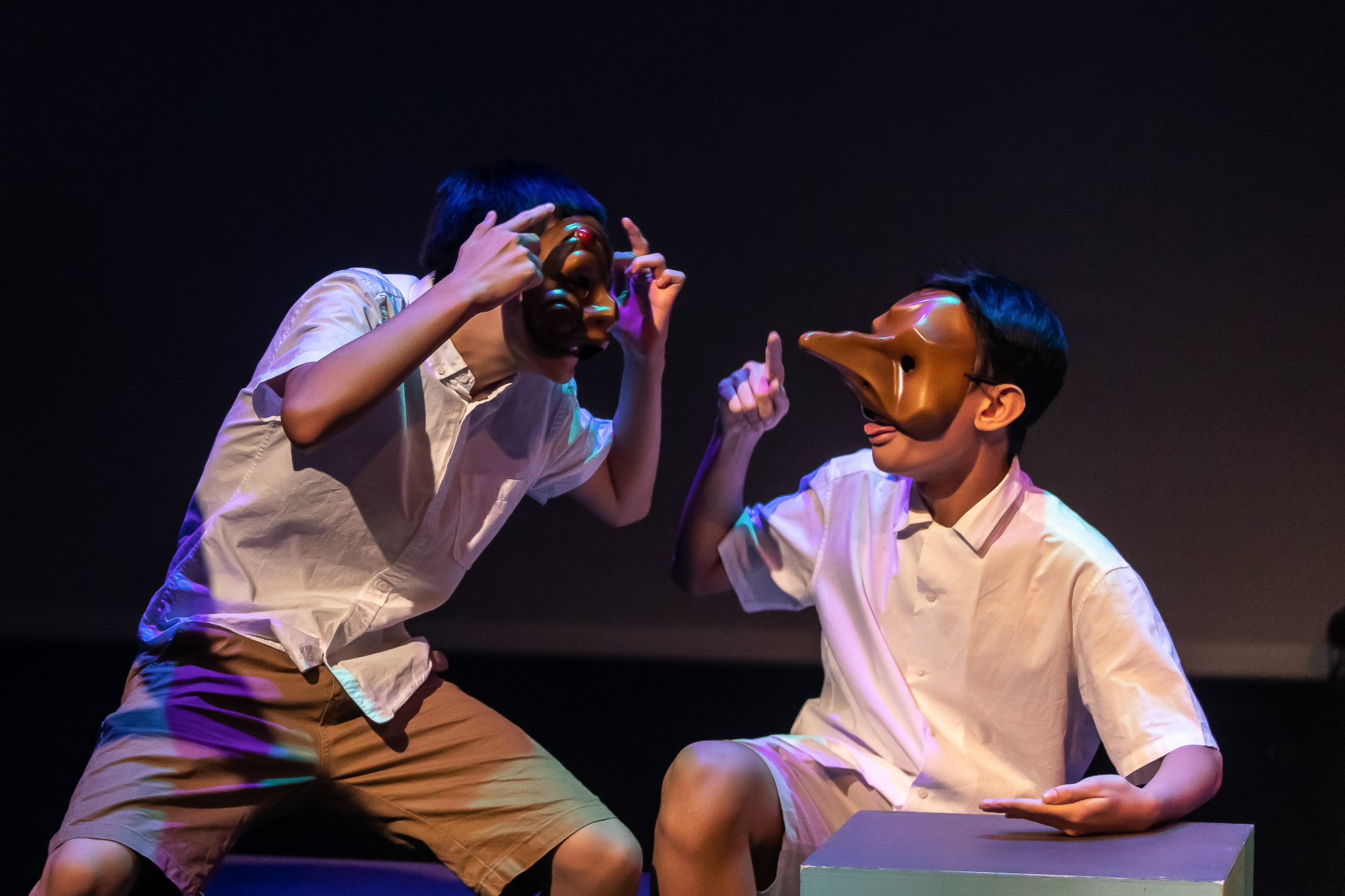 We then begin our main narrative proper, and meet Barry, the boy about to take his PSLE, lamenting about his wheelchair-bound uncle, and other family issues that plague him. Opposite him, the single father performs a short, well-executed monologue also discussing his issues, both expressing a desire to escape from it all, and giving us a succinct but informative image of what life’s like on the ground for these marginalised groups. Coldplay’s Fix You plays over the soundsystem, and we think about the constant struggle these people go through on a daily basis. 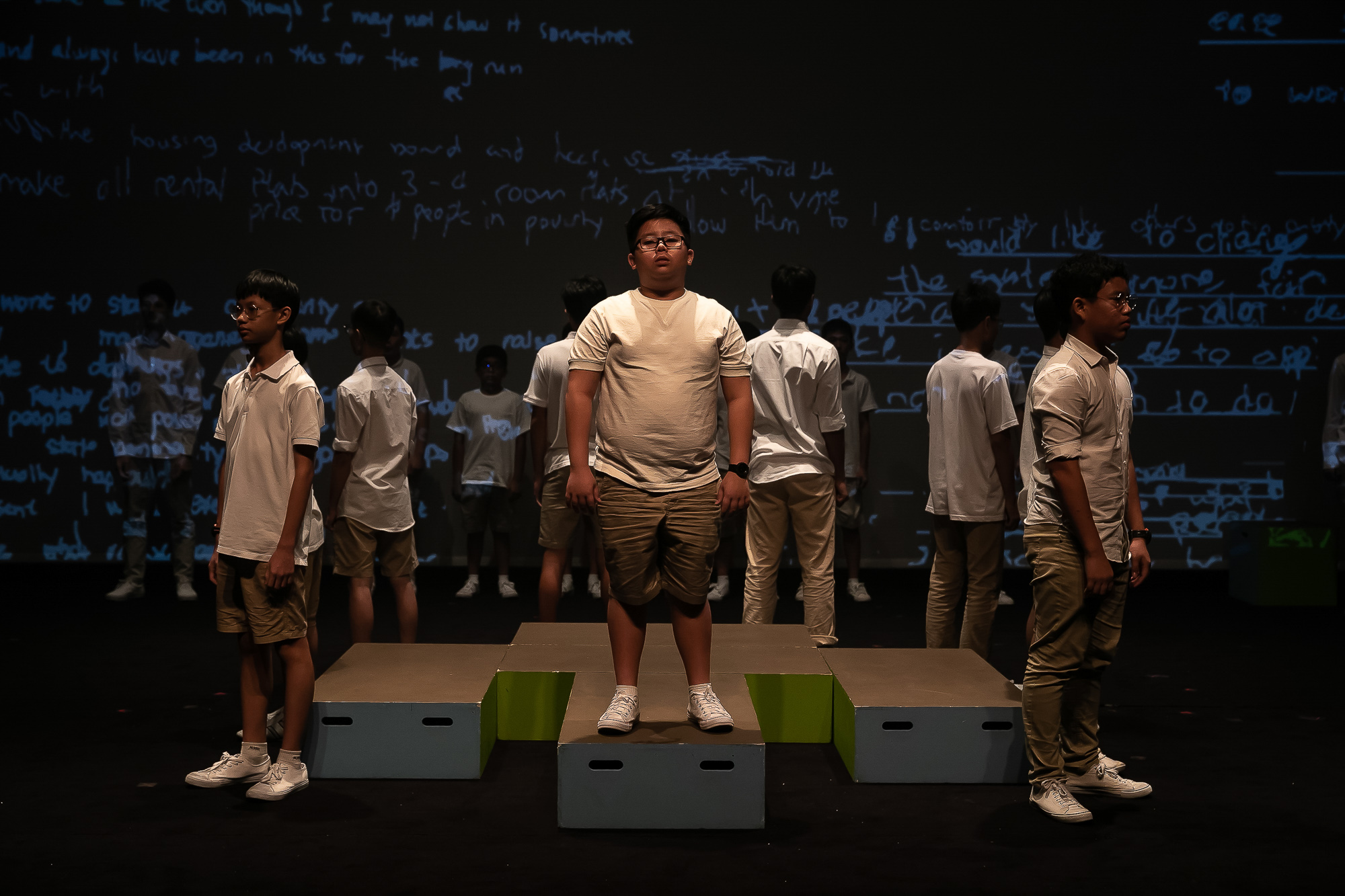 Returning to the play-within-the-play, we watch a performance of ‘Cinderfella’, and relate strongly to the idea of being given an unfair disadvantage to certain opportunities, due to not being able to afford certain things. Even if a helping hand comes into the picture, it often comes with its own hidden terms and conditions, where every bit of help warrants a trade off of some kind. We also watch and see how even the poorest of parents, for all their struggles, ultimately just wish for the happiness of their own children, buying them material goods such as an expensive game console (represented by shadow puppetry playing out behind a sheet to portray an arcade-style fighting game). This becomes especially poignant when we think about the material rewards parents promise their kids for doing well in school, and how difficult it is to maintain for poorer families. 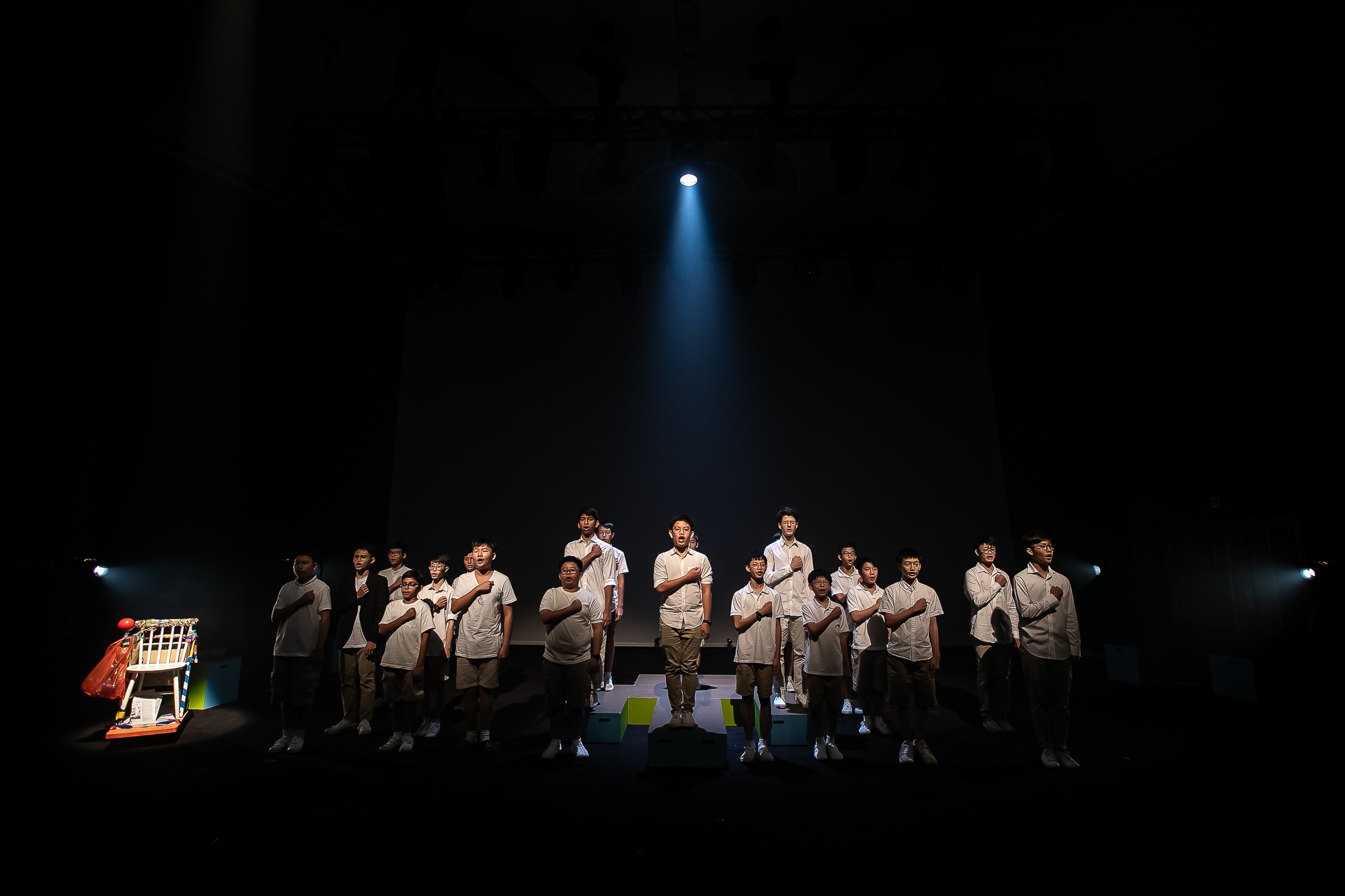 Jumping ahead five years, we watch as Barry goes from Primary 6 to Secondary 4, and discovering plenty more obstacles that stand in his way of success. He learns, for example, that despite the many schemes set in place to help people get jobs or grants, these are in fact, surprisingly limited, with immediate rejection the moment the criteria isn’t met perfectly. As the students all stand around, we watch as the screen lights up with their thoughts, as it displays a montage of handwritten notes from each one depicting their perspectives and opinions on poverty, strongly reminding us of our own privilege when they mention not realising what a one room flat even looks like, or what it’s like not to be able to afford seemingly common items, creating empathy for the poor. Each in the spotlight as they give their own final statements, we end The Ground as they come to attention for morning assembly at last, and say the pledge to hammer in our country’s impossible dream of equality for all. 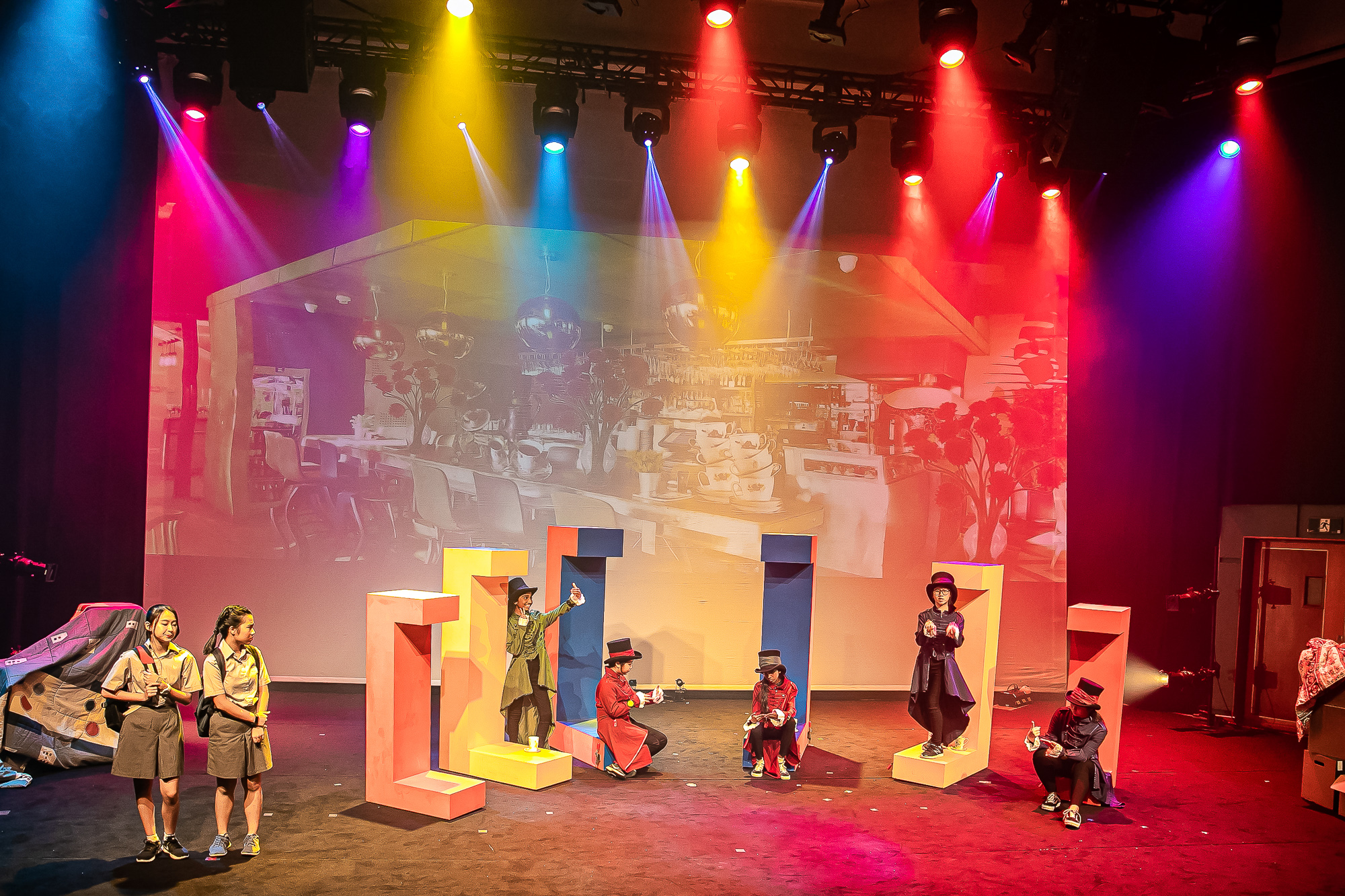 In Anderson Secondary School’s Wonderland, poor student Nadine cannot pay for many things in school. Curious about her situation, her classmate Charmaine follows her down a rabbit hole, and discovers the secret machinery keeping generations of Nadine’s family financially strapped and “low-class”. Focusing strongly on the visuals, the play opens with the entire cast all acting as whimsical characters from Lewis Carroll’s Alice in Wonderland, such as the cards. Now in a classroom setting, we watch as a teacher leads the class in discussing socioeconomic status. We notice that one student is always being picked on – Nadine, whose mother is a cleaner. Made the butt of jokes for not even being able to afford the $25 class t-shirt, she is swept up in a wave of shame and embarrassment. 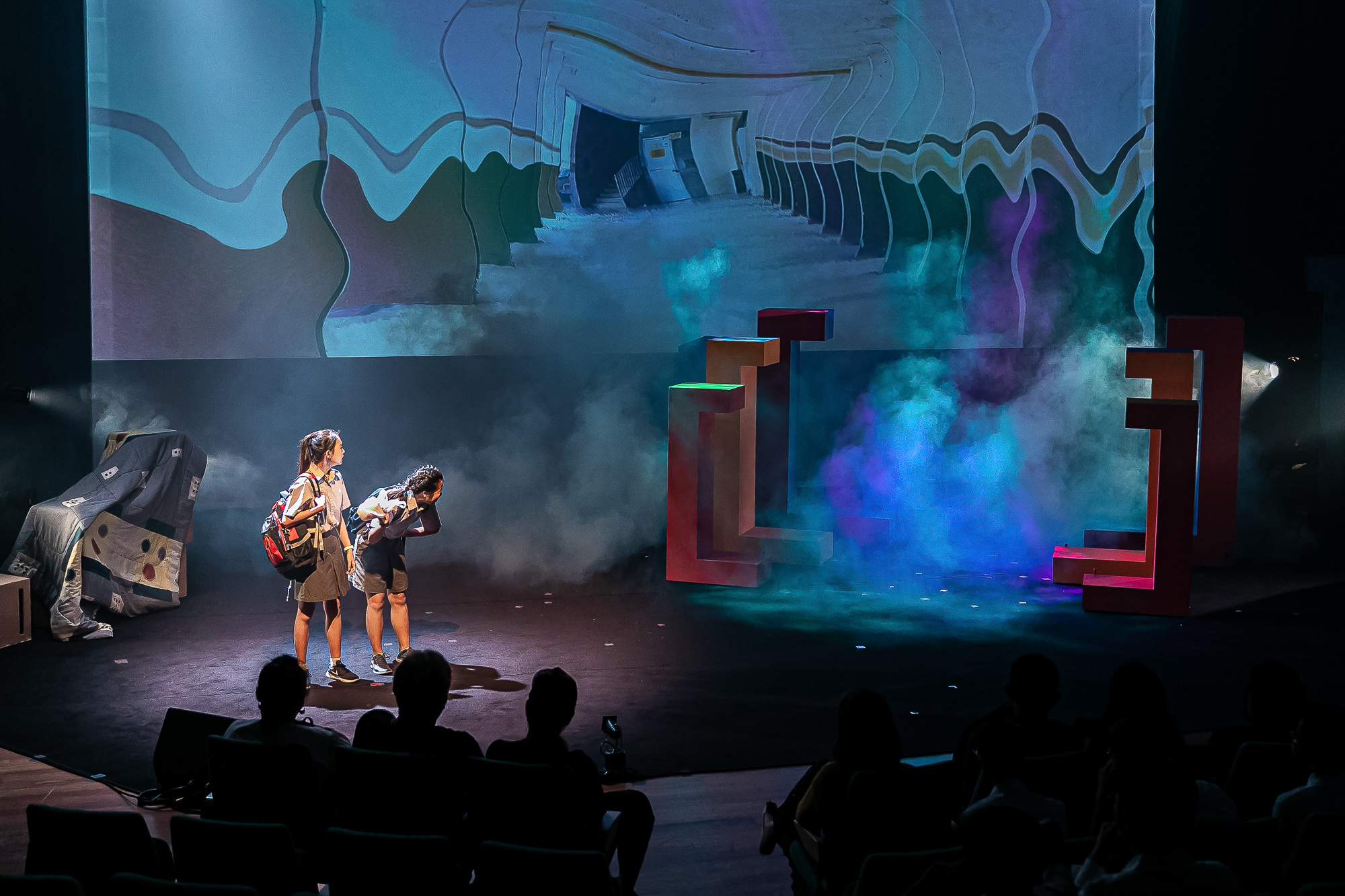 Tasked to find a partner for a group project, Nadine is left as the last one to be picked. But thankfully, Charmaine comes to the rescue. Dressed prim and proper, we get an immediate sense of confidence emanating from her, as she attempts to get to know Nadine better. There is a sense of both fear and curiosity as the two argue over whose house they should meet at, as Nadine insists on visiting Charmaine instead due to her own shabby home situation. Watching the onscreen visuals display a gym, pool and other amenities, we are immersed into the world of Charmaine’s luxurious condominium home. Nadine is naturally fascinated by this new world, amazed at how Charmaine has her own room, and air-con to be used whenever she feels too hot, and even her own computer. Noticing an old set of Barbie dolls, Nadine is evidently shocked as she clutches the doorway when Charmaine off-handedly remarks she considers throwing them away, as Charmaine’s maid enters and gives them ‘root beer floats’ (well-crafted as props). 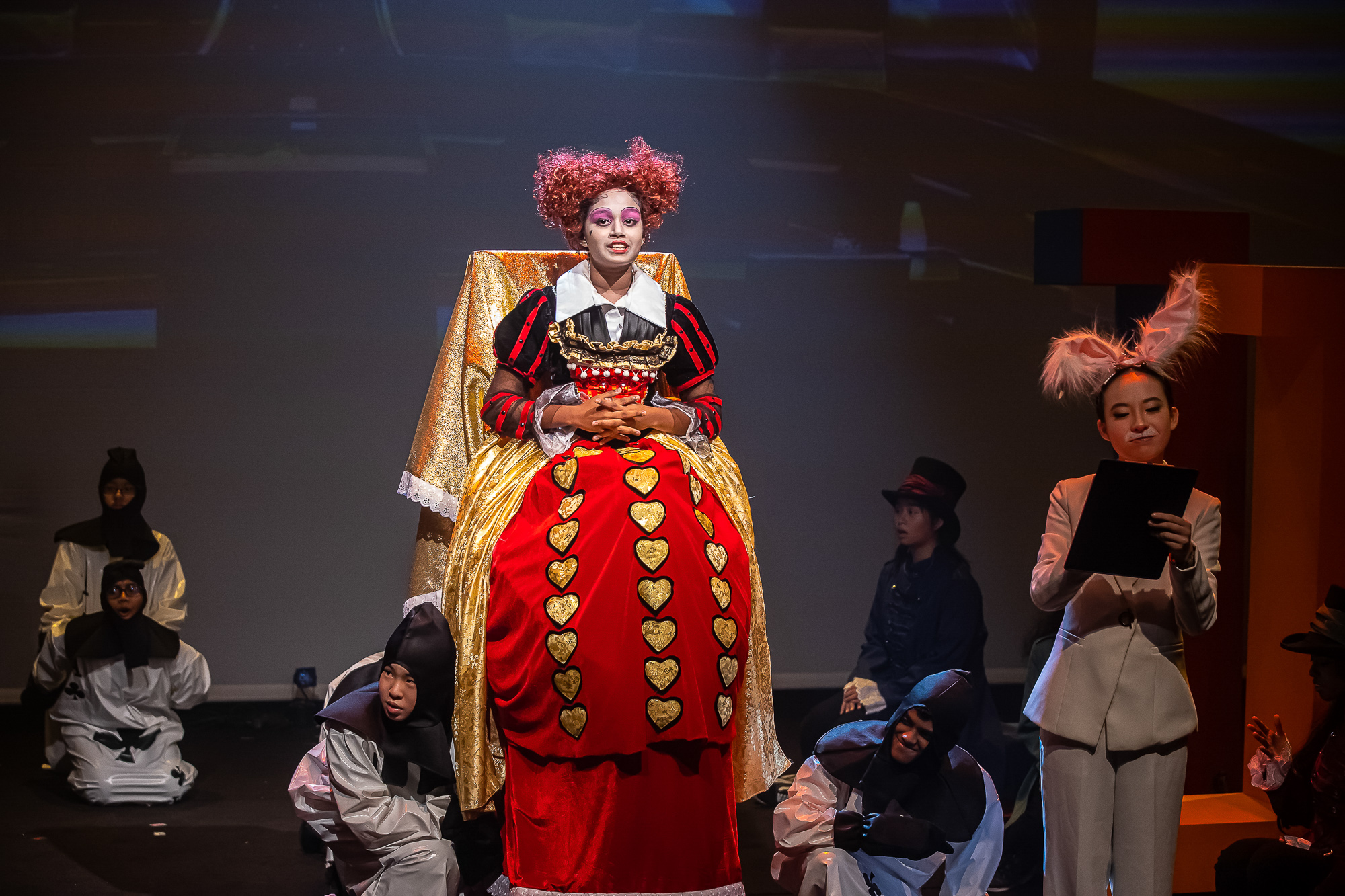 We then cut to Nadine’s home, with the visuals depicting the one-room flat as cramp and cluttered. Certainly, as close as Nadine’s relationship is to her mother, it cannot overcome their dismal living situation. Charmaine is then introduced to Nadine’s room, given the royal treatment as smoke machines (an expensive and rare special effect that the Esplanade and Peer Pleasure has given the students a chance to use) enshroud it in a sense of mystery, only to reveal the dismal truth behind ‘wonderland’. As they discuss the idea of this ‘wonderland’, 6 students begin running in a literal rat race. Nadine questions the viability of saving them from it, as we watch one of the students fall, while another cut another one in front of them. It’s survival of the fittest, as Nadine only watches in horror. 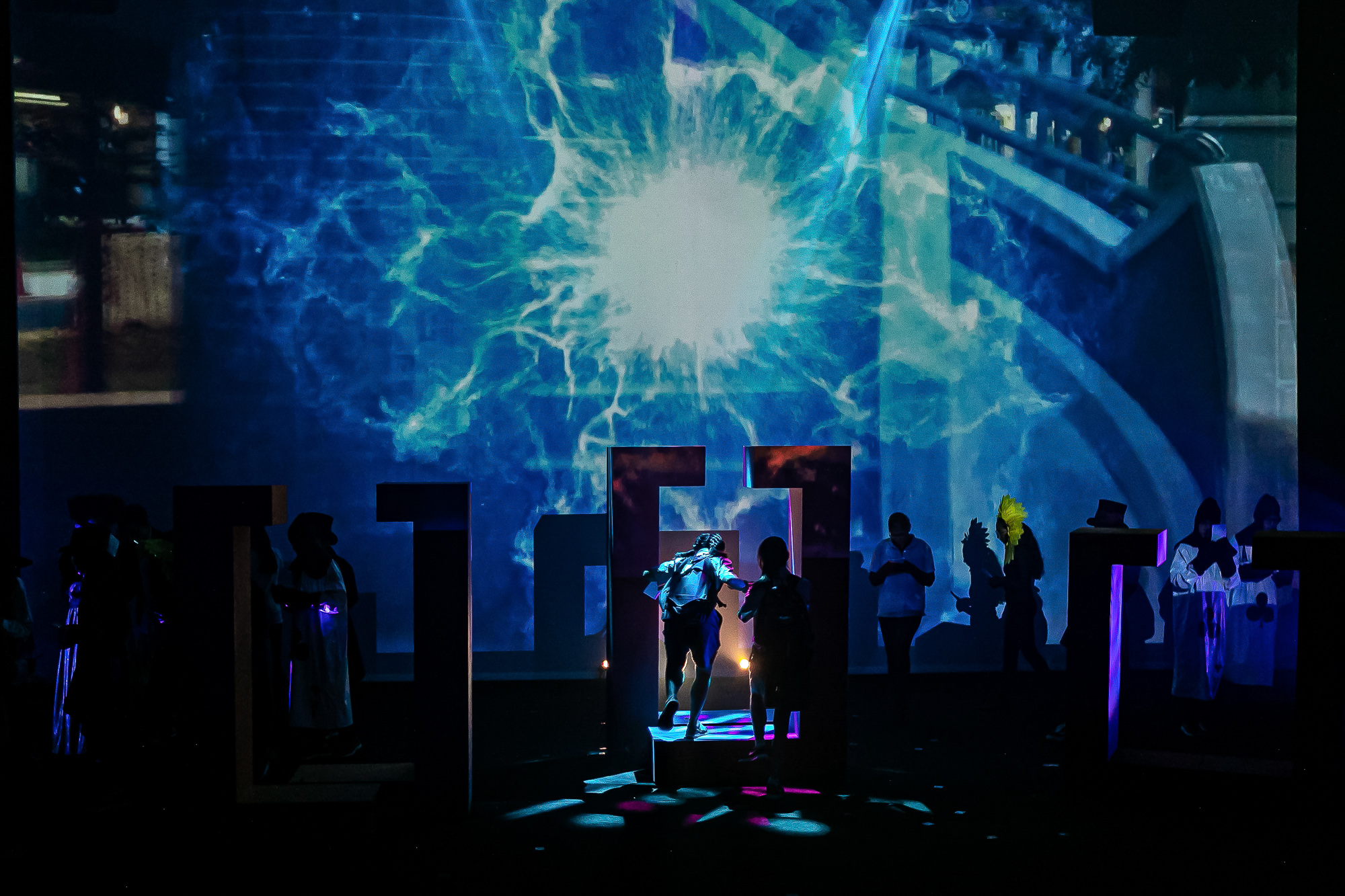 Certainly, the wonderland that Nadine experiences is far from wondrous, as she reveals her father’s alcoholism, and her mother’s need to work all day to support the family. As Charmaine and Nadine meet in a fancy cafe, surrounded by a posh crowd, Charmaine and Nadine are served a macchiato float, and realises what privilege it is they are able to have time to enjoy just like that. We watch as the Queen of Hearts arrives, rolling in on a wheeled high chair as her throne and yelling ‘off with her head!’. Returning to Nadine’s room, Charmaine’s mother, on the phone, speaks to Charmaine, worried that she hasn’t returned home yet. In explaining that she’s in Nadine’s neighbourhood, Charmaine’s mother reveals her prejudice, afraid for Charmaine’s safety as she talks about this ‘dangerous and disgusting neighbourhood’. Realising just what an unfair society she lives in and is a part of, Charmaine looks only to Nadine, and tells her ‘let’s go to Narnia’, as Wonderland ends with a sobering message that sometimes, only escapism can possibly save us from society. 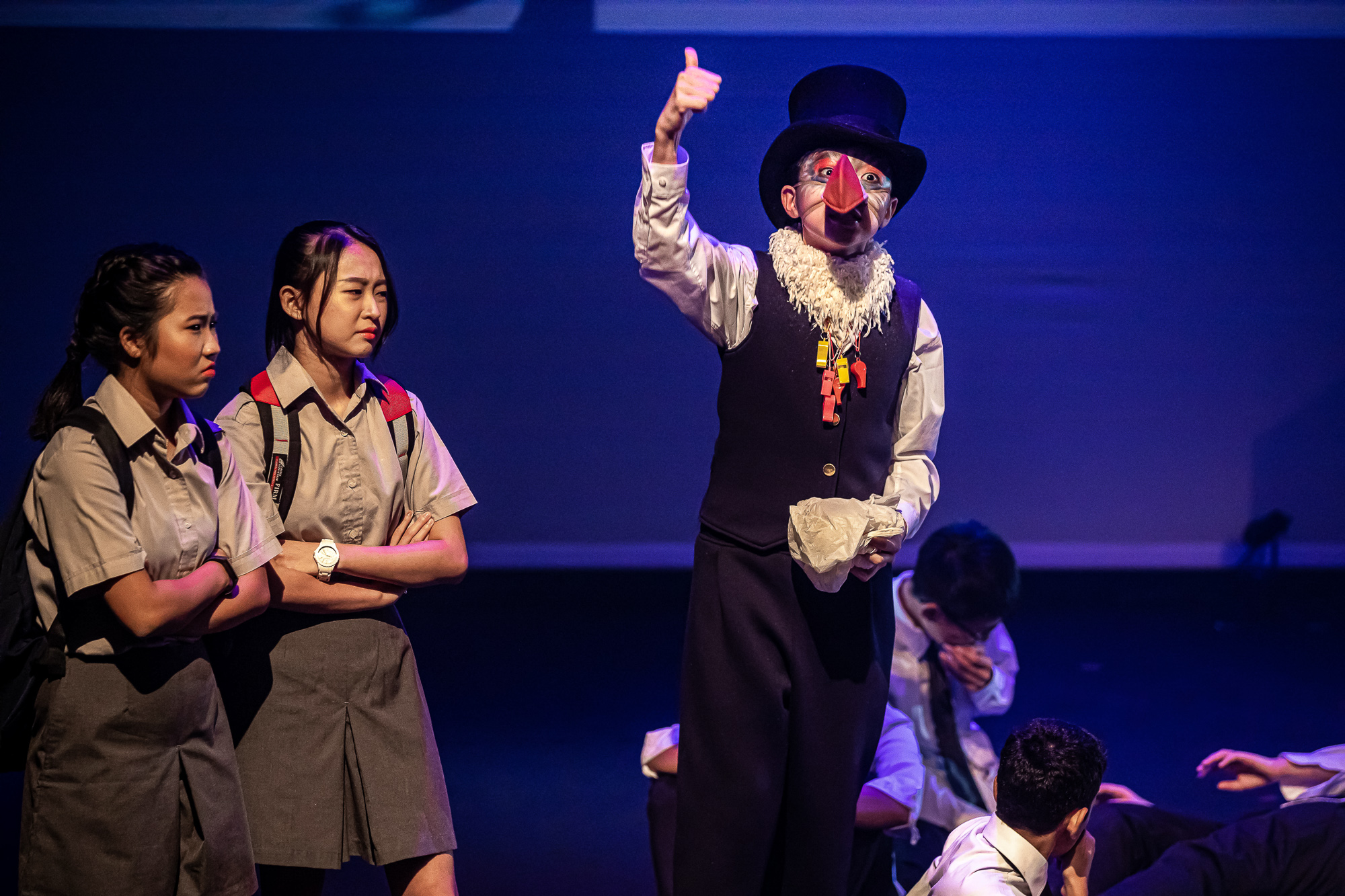 It’s a joy to watch both sets of students perform, partially because of their good enunciation and natural, confident acting that makes them feel comfortable onstage, in addition to the thought-provoking storyline. One is left impressed by the potential these students have shown in the work they’ve devised and performed, and certainly hope that some of them will eventually bring this flair for drama and love for the theatre into their adult life in future.

With this double bill of work, Peer Pleasure has shown to be a strong platform for students to become more aware of the pressing social issues in our society today, and a rare chance for these students to have the opportunity to deliver a public performance in our finest performing arts centre. Certainly, with the sharply devised work these students have presented, Peer Pleasure has proven that the arts are a powerful way of accessing these issues, allowing these students and audience members both to better understand and empathise with the social issues plaguing society today. With this performance, we’re left us with the hope that the festival can only lead to better things for both the local arts scene and society in general as it continues to educate these students for the future.

The M1 Peer Pleasure Youth Theatre Festival 2019 runs from 24th July to 4th August 2019 at the Esplanade. For more information and the full programme lineup, visit their website here