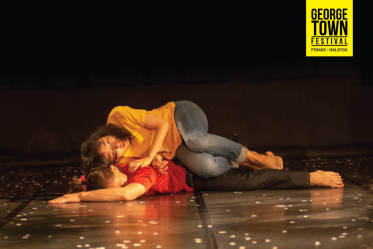 Finding the connections between others who seem worlds apart.

PENANG, MALAYSIA – Directed by Argentinian director Leandro Kees and dramaturged by Julia Hesse, The Strangers brings together 4 performers from 4 different Asian countries (Cheng Ying-Yun, Kanako Ihara, James Kan Che Wei and Sanghun Lee) as they gather onstage and learn about each other. Seemingly with little to nothing in common, be it food or language or history, over the course of the 45-minute non-verbal performance, The Strangers then seeks to create a connection between them and find the inherent links beneath their superficial differences.

Each performer enters the stage carrying placards, explaining each of their countries of origin. Not knowing who any of these actors are, the cards form an easy, immediate sense of identity and assumption attached to each one, until they started to exchange the cards, mixing them up. We cannot discern if they are from Japan, Malaysia, Korea or Taiwan, owing to their similar East Asian appearance, and it impresses us how the casting was chosen, and how it often mimics our mistakenly assuming a person’s country of origin from appearance alone.

Throughout The Strangers then, this issue of similarity and difference is constantly subverted and challenged, such as topics of salary and employment, an issue one cannot possibly guess from first sight. Dressed similarly, we think about how we’re often quick to judge and compare others, impressing our own prejudices and assumptions on others when their circumstances are truly revealed and clouding our perceptions of them, making The Strangers hit hard with its realism.

Even when the performers begin to dance, there is a similarity to their movements that makes them hard to tell apart at times, moving in graceful unison, while they spray confetti into the air. As the confetti rains down, we wonder how much these differences we keep trying to identify really matter. We watch as one dancer attempts to scramble around on the floor, searching, searching for some form of identity amidst the scattered confetti. Back facing us, he unzips his pants before urinating, perhaps in an attempt to display his masculinity. He then attempts to showcase his strength, breaking plywood with his head and legs, perhaps afraid that he would be forgotten and lost, not memorable enough to leave an impression, in the flurry of activity and indistinguishability between dancers.

With three dancers onstage, 2 wearing the same coloured shirt and one not, there is a distinct sense of segregation. Using the placards, she tells a story, promising that ‘One Day/This/Will Be Over’ before showing us a blank card. We are encouraged to think about our own lives, or how we might continue the sentence, all the while appearing dazed, confused and left out while the other two dance. We feel and relate to her isolation and apart-ness from the group, as she reiterates via placard “I wonder when this will stop”.

In the next segment, we watch as as the isolated dancer dances with a male partner, their movements suggesting pushing and pulling as we consider ideas of acceptance and being loved. As they lie down and look into each other’s eyes, there is the sense that she is desperately seeking out some form of support, the soundscape teasing out the longing in each other for that connection to each other.

Another female dancer appears, and opens her mouth as if to speak, pausing, as if her train of thought is derailed. She chooses instead to express these thoughts through movement and dance, the soundtrack epiphanic in nature as she sweeps the confetti into the air with her feet. There is a distinct sense that this is all a dream from the way she dances, communicating everything with her body alone, before we segue into the next scene, where each performer speaks their respective language.

While we may not have understood the individual words they were speaking, one feels the essence of acceptance, learning, and finding new ways to communicate beyond the language barrier. We insult others in our own language to divide ourselves further, othering the perceived ‘enemy’, and as we watch this play out onstage, one of the male dancers is bogged down by the weight of it all. Yet, he manages to rise above it, revitalising himself with a handstand and showing off his strength, dancing furiously, whirlwind like to overcome these assumptions and perceptions.

The Strangers then ends up as one energetic frenzy of a performance, almost constant, non-stop dancing. Throughout the entire duration, our minds were kept running as we thought and pondered over the issue of connectivity (or lack thereof), and what it is that keeps us from wanting to befriend strangers, or finding that closeness to other people. By the end of the show, we are left humbled by how the dancers have found connection beyond language via their bodies. Each carrying their own photos of their family, depicting how how they grew up, we accept that they are not defined by their stereotypes alone, each one an individual, fully-formed human being worthy of getting to know better. The Strangers are no longer strangers to us and to each other – they are friends.