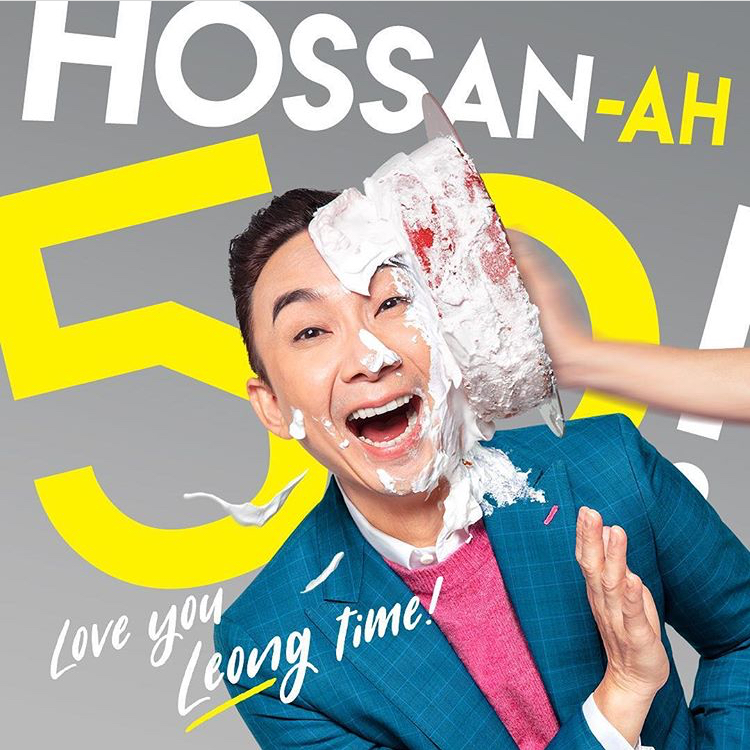 A last hurrah for the Singapore Boy in this sincere celebration of a life in entertainment.

Surefire ways to tell you’re getting on in age – when people call you ‘lao ban’ (boss) instead of ‘xiao di’ (little boy), and when you realise it’s probably more appropriate to call the taxi driver ‘brother’ instead of ‘uncle’.

Where these might spark a mid-life crisis in some, entertainer Hossan Leong has managed to take it all in his stride, boldly declaring that life only begins when you want it to start and ends when you want it to end. His fiftieth birthday then, is the furthest thing from a cause for concern. Instead, it comes as a celebration in the form of new show Hossan-Ah 50!: Love You LEONG Time! that commemorates his many years in show business. 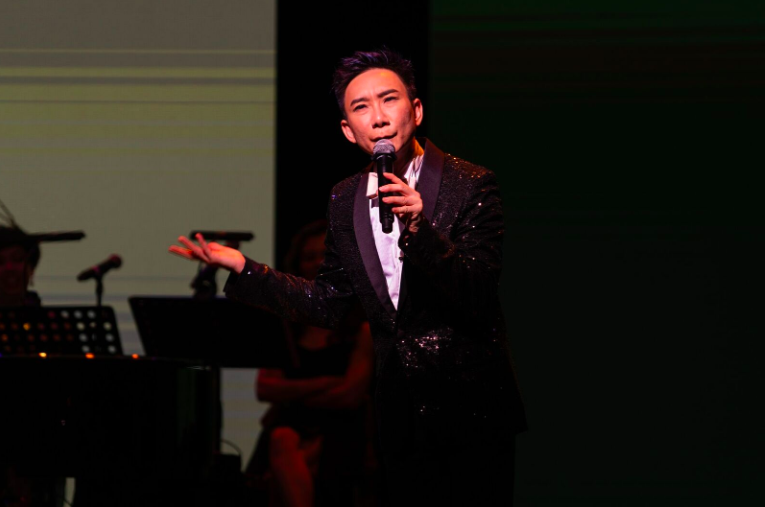 As a veteran of the local arts scene, the show’s title is wholly and absolutely appropriate. Hossan has been a staple of the theatre scene for countless years, from his humble beginnings with The Necessary Stage and Michael Chiang’s Army Daze, to working with some of the biggest companies today, from Pangdemonium!’s The Full Monty to the Singapore Repertory Theatre’s Forbidden City: Portrait of an Empress. In recent years, Hossan has shown he’s far more than just an actor too, displaying a penchant for strong direction with his work on various W!ld Rice pantomimes and Dream Academy’s production of Stephen Sondheim’s Company.

Perhaps more prominently, Hossan’s biggest claim to fame is his work on screen, a quintessential part of my childhood where I recall seeing him on television shows like Under One Roof to the big screen, with Just Follow Law and I Not Stupid. His biggest break though, was probably as the host of local game show We Are Singaporeans in 2011 (one that I myself was on sometime back), and his ‘double confirm’ catchphrase entered the lingo of Singaporeans everywhere. Couple that with hosting the National Day Parade in 2014 and his high demand as an emcee, and Hossan is undoubtedly a Singaporean icon of the highest order, a constant in the arts and entertainment industry, and a person who’s irresistibly likeable. 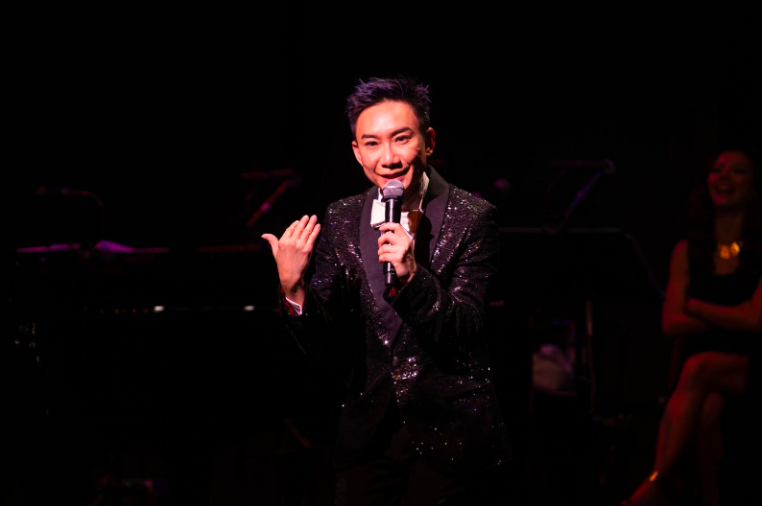 Knowing that this will be the final production in the style of The Hossan Leong Show for some time to come, it’s hard not to feel the sting of emotion as we enter the Drama Centre once more. The Drama Centre itself has always and forever been his choice of venue for The Hossan Leong Show since its first iteration in 2009, and one we’ve watched every edition of and followed through the years. It was clear that each and every person in the audience knew the same thing, and most audience members were also already longtime fans of the man, here to support him and celebrate alongside him.

As the theatrical version of a grand Golden Jubilee, it’s no surprise that Hossan pulls out all the stops for this show, coming out on stage in a dapper black suit and bringing the full extent of glitz and glamour to his performance. There’s a sense of warmth emanating from the audience as they watch his every move, and as he smiles, we know the feeling is mutual. With his magnetic personality, it’s really no wonder he’s been such a staple of the industry for so long, and from the moment he opens his mouth to sing it feels as if we’ve been personally invited to an intimate lounge or underground jazz club with how much of himself he pours into the show. 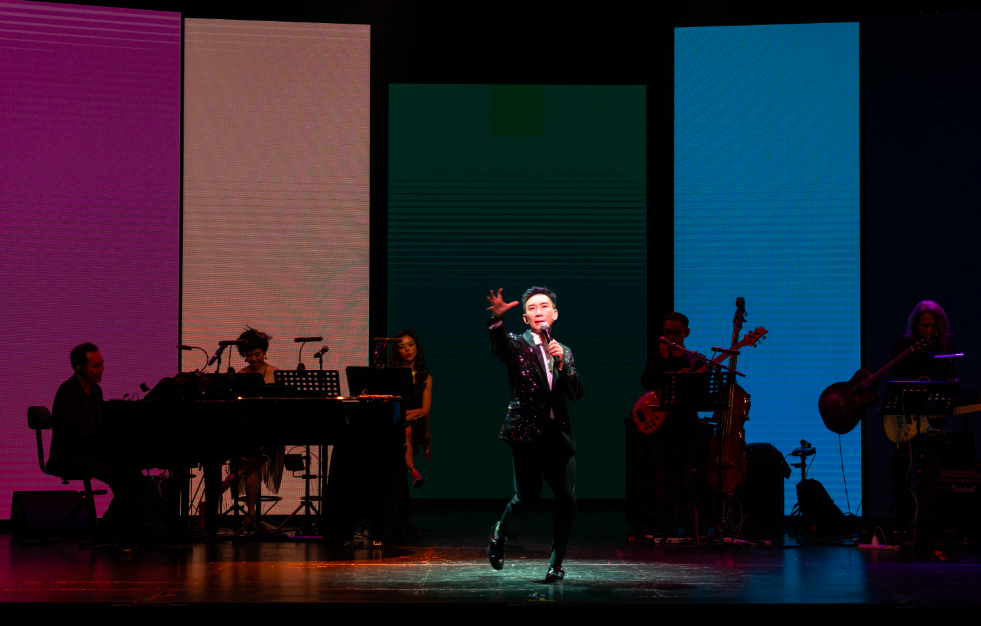 With a giant LED screen behind him displaying a series of visuals to amplify the mood of the performance, from old photos of past productions to evoke nostalgia to a flash of colours to accompany each number, Hossan opens with a medley of familiar songs that shows off just how much he loves to sing. With the joy radiating off him clear to see, Hossan-ah 50! is undeniably a reminder and tribute to how far he’s come over the years, as he sings proudly, confidently and energetically. 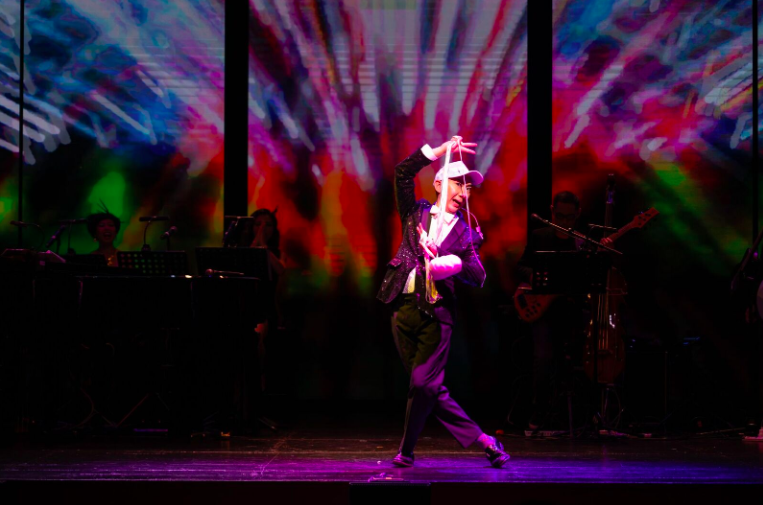 Playing on the idea of anniversaries, Hossan’s banter and jokes also playfully make reference to the past as well; for those who belong to the affectionately coined ‘Sudahlah’ generation, you’ll be sure to appreciate the old school references and memories Hossan recalls and compares to modern life, such as how the lack of handphones in the pre-2000s meant getting to know friends’ helpers and mothers intimately whenever he called their homes, and how our crippling phone addictions today have affected toilets, of all things. 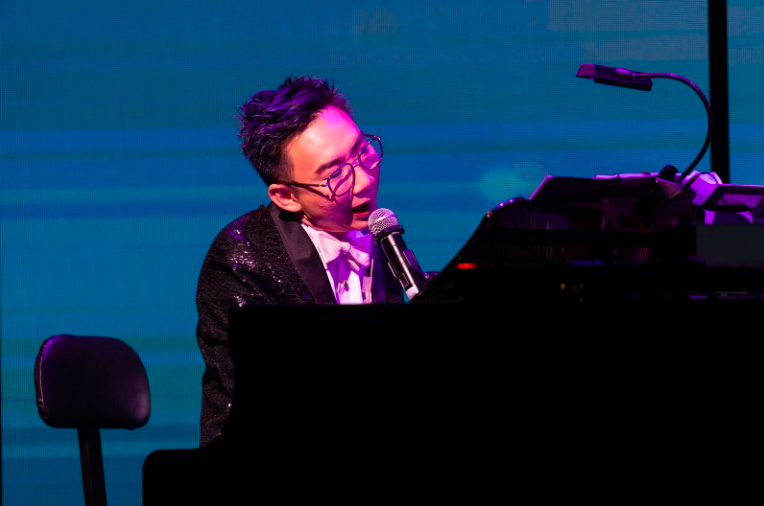 But don’t think that it’s all about reminiscing the ‘good old days’ – much of Hossan-ah 50! in fact looks forward to the future, with Hossan sharing how he’s been actively keeping up with the times, from his observations of fitness trends to discussing today’s social media influencers. If anything, it’s proof that fifty is absolutely no barrier to his energy, constantly adjusting and adapting to the world as it changes around him, and ever relevant. 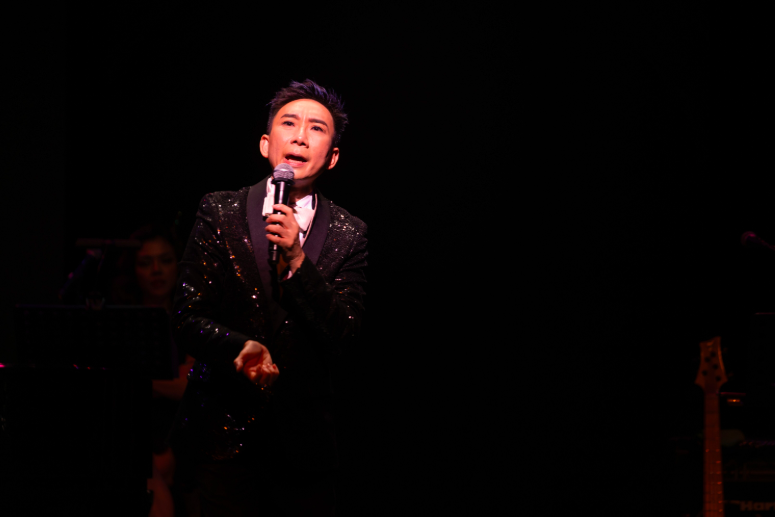 He certainly hasn’t done it alone though – longtime friend Benjamin ‘Mr Miyagi’ Lee has been by his side throughout, helping him pen material, while onstage, Hossan is also accompanied by his live band (Daniel Chai on guitar, Colin Yong on strings, Rizal Sanip on drums and Julian Wong on keys) and his gorgeous ‘ACS’ trio of backup singers (in a nod to his alma mater), comprising Audrey Luo, Candice de Rozario and Sharon Sum. Fully embracing his ‘ang moh’ nature, with a single song, Hossan easily brings audiences from the sunny shores of Singapore to the Western continents, be it French ditties or an emotional cover of Bradley Cooper and Lady Gaga’s ‘Shallow’ (even joined by special guest ‘Lady Luoluo’). 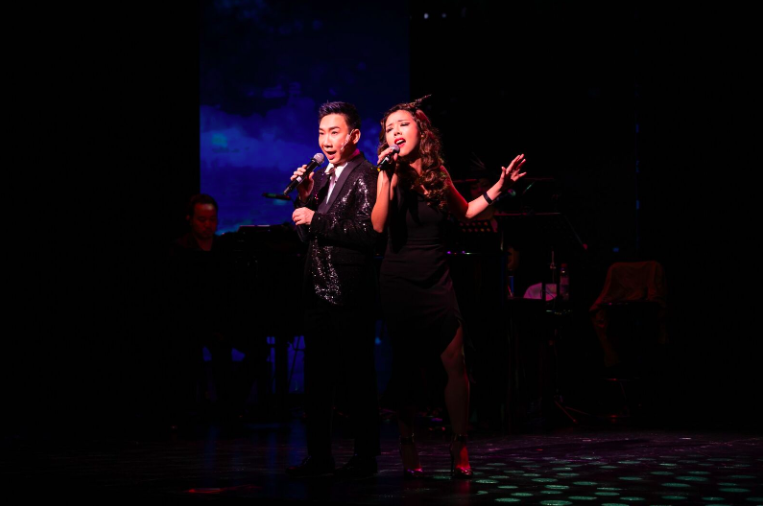 Amidst the jokes, Hossan-ah! 50 is a production that sees Hossan baring his soul onstage, bringing up the life-threatening incident he encountered last year when he was hospitalised for 10 days, with doctors unable to find a cause for his illness for the longest time before finally deducing it was melioidosis. As a survivor, the incident has only caused Hossan to love life harder than ever before, living each day as if it were his last, before launching into a heartfelt rendition of ‘Joseph the Dreamer’. Watching Hossan is like watching an act of defiance against age as he dedicates himself fully to each 100 minute performance over the almost three week run, and it’s evident that he’s completely in his element as he sings number after number; listen to him croon Aretha Franklin’s ‘I Say A Little Prayer’, and you’ll be convinced that this is a man who can and will stay in your heart ‘forever, and ever’ after watching him live. 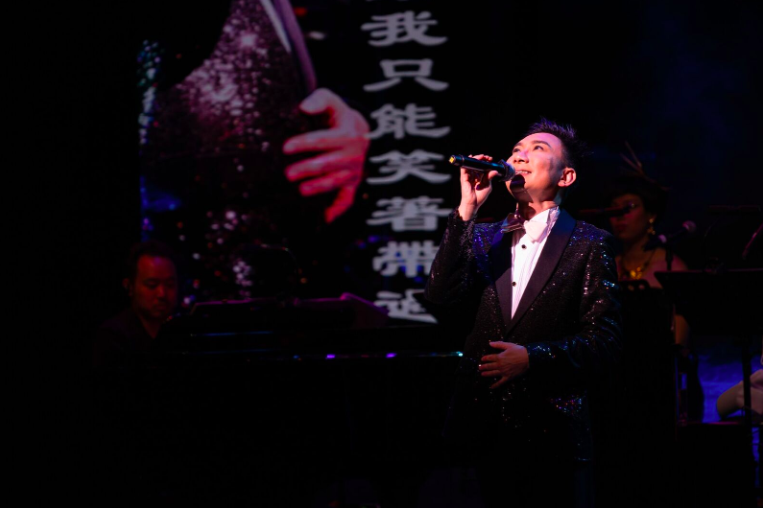 And like any good showman, Hossan still manages to save his most show stopping number for last. Assisted by capable stagehands such as Michelle Chan and an immaculately maintained set of costumes by wardrobe manager Nurhidayah Mahadi, Hossan delivers a Disney Princess medley (deftly accompanied by pianist Julian Wong), as he does quick change after quick change and transforms from Mulan to Jasmine, Belle to Ariel to Pocahontas. It’s impossible not to feel a twinge of emotion as he belts out one familiar Disney standard after another, ending with a particularly special one that reminds us to forget the criticism and naysayers – so long as we’re still alive, it’s all we can do to keep looking forward to the future that lies ahead of us. 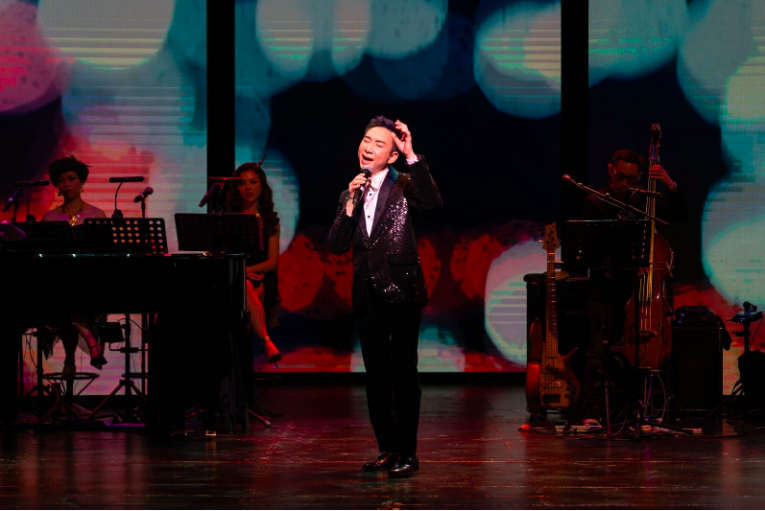 Much like its star, Hossan-AH! 50 is Singaporean to the core, celebratory and joyous even as we know this will be the last chance we’ll get to see Hossan performing like this. This is a performance that sees Hossan standing tall, opening himself up completely to each and every person in the theatre, and making sure that even if he’s going out, he’s going out with a big bang of a last hurrah. Watch this show, and whether or not you grew up hearing his voice and knowing his name, or belong to the new generation and are only just discovering this man’s wealth of talent, and you’ll be convinced that Hossan is worthy of being loved ‘Leong time’. We will never see another person quite like the personality Hossan is, and with love and admiration in our hearts, we swell with pride when we hear his signature introduction and know: ladies and gentlemen, boys and girls, this is Hossan Leong.