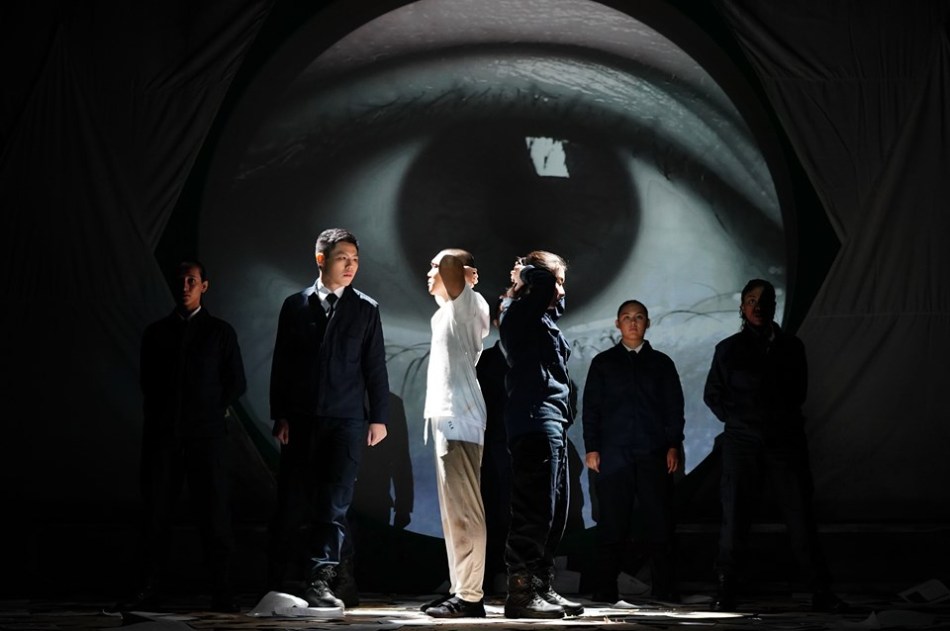 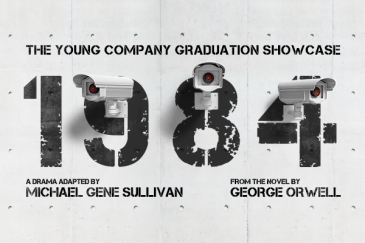 George Orwell’s 1984 is a classic of modern literature, imagining a terrifying dystopian world of surveillance states and totalitarian governments. And come the chaotic state of the world today, more than ever, it feels as if that world is becoming a reality we cannot deny. With this new production by The Young Company’s latest graduating batch then, the young actors, led by director Daniel Jenkins, attempt to bring that world to the fore, and remind us that 1984 and 2019 may be far closer than we think.

Set in a fictitious timeline where the world has been split into three totalitarian super-states and are at constant war with each other. Our story focuses on Winston Smith (Marwyn Ho), a ministry employee who rewrites records and history according to the state. Over time though, as he encounters more and more internal strife and dissidence from the ground, he begins to harbour his own dreams of rebellion and freedom, something the state certainly won’t take lying down. 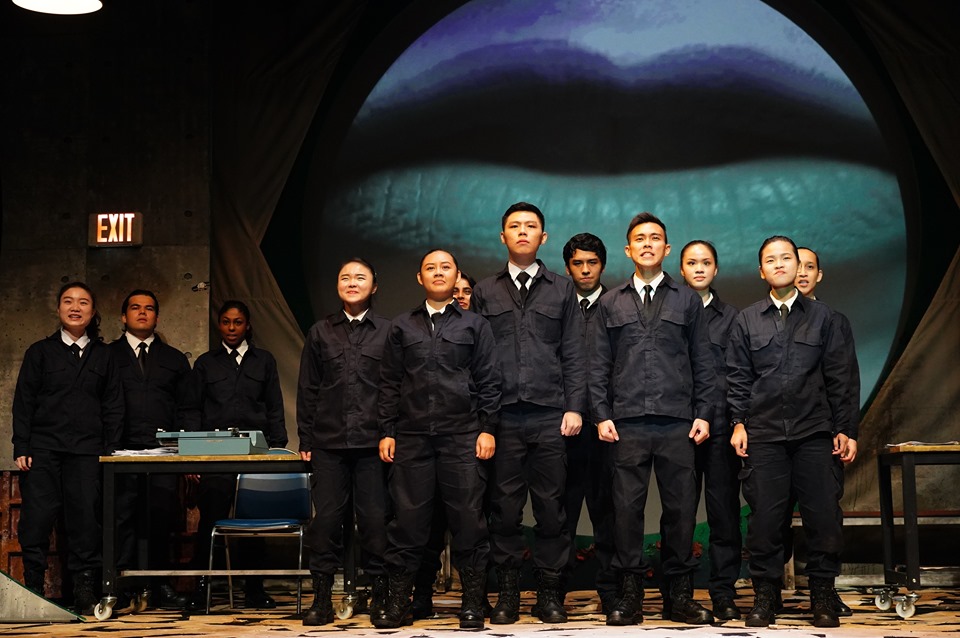 There is a total commitment on the part of The Young Company to immersing audiences in the reality of 1984. We open with an announcement made with a loudhailer in the dark, while a gigantic visual of a human eye stares back at us from the stage, blinking and ever-present. It is clear that there is nowhere to hide, and that while we watch the play, someone, somewhere, is watching us.

This version of 1984, as compared to Robert Icke’s version, allows for far more ensemble work, as the 15-member cast takes on a multitude of roles throughout the play. Standout cast members include M. Shankari as Parsons, and Tan Yan Ru as O’Brien, both showcasing strong enunciation and emotion despite being secondary characters. The ensemble as a whole works well together, all dressed in identical black suits and using their numbers to fill the stage and play citizens. There is plenty of room and opportunity for each actor to shine. 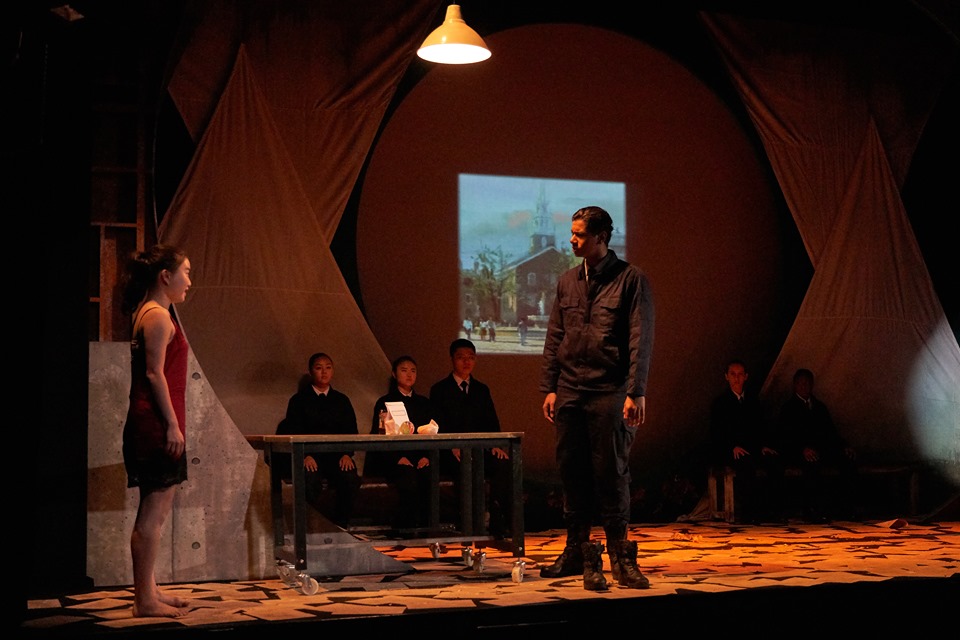 Throughout 1984, one gets the distinct feeling that no single person can be trusted, with the ensemble acting almost as a hive mind, gathering as one to hear ruler Big Brother dictate their lives. Marwyn Ho, as Winston, gives the impression of a character who is both paranoid and shifty, at once suspicious and suspect. When Winston becomes entangled in an interrogation, we watch him forcibly questioned by a party member played by Shaik Nazray. The size difference between the two makes Winston seem like he has shrunk, with Shaik dominating and overpowering him completely, an effective use of casting on director Jenkins’ part. 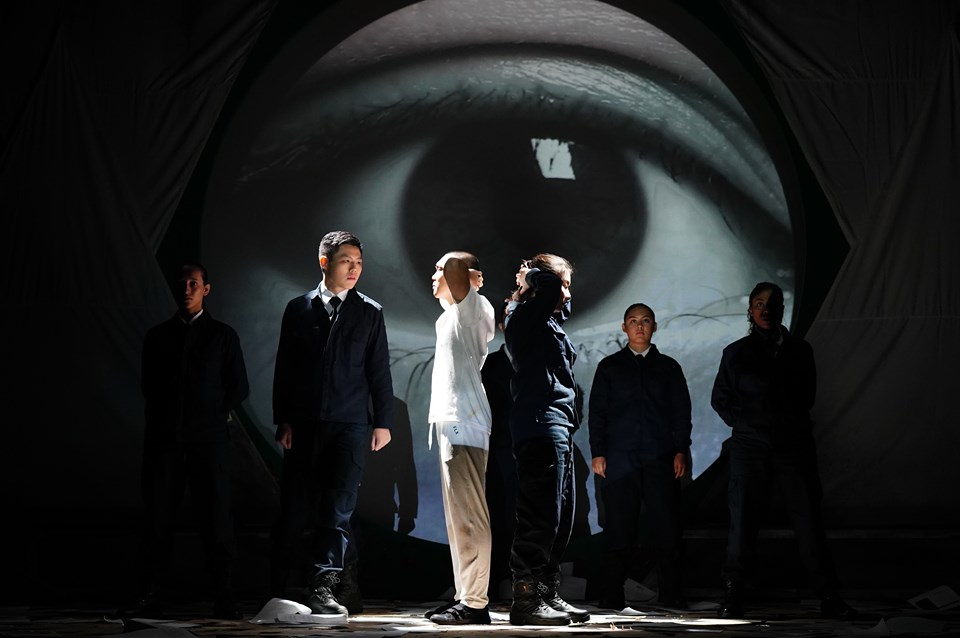 When Winston finally gets tortured, there is an almost Pavlovian response to how he is trained to fear being tasered each time he says something against the state, using fear to create total obedience. As the strobelights come down on us, we see his torture escalating, as he is threatened with both physical and psychological pain by the relentless thought police, who are only ‘doing their job’. Now clean of all anti-government thoughts, the eye, right behind Winston, opens wide as he chillingly ends the play with: ‘I love you Big Brother’. 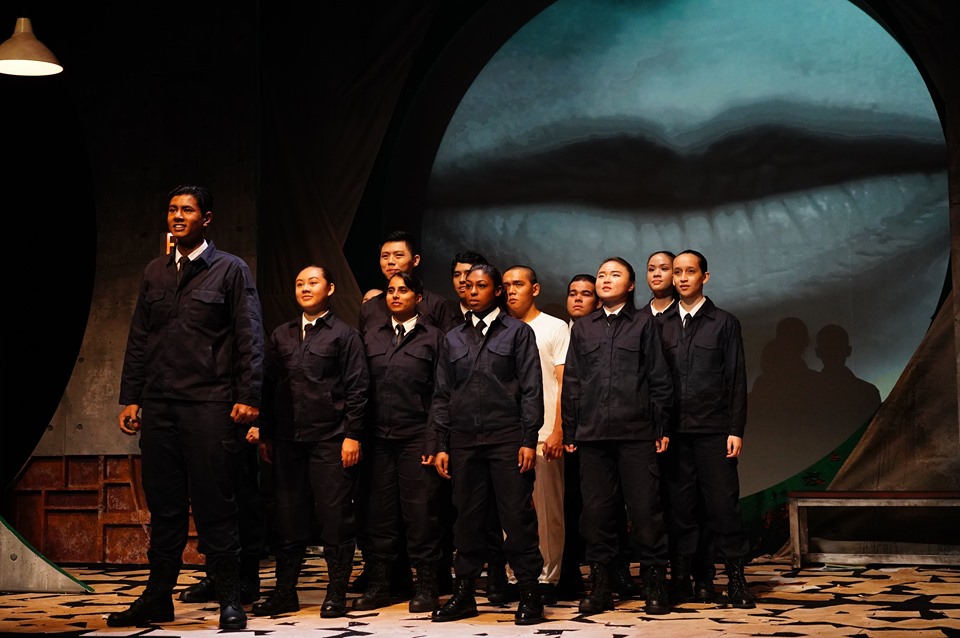 With the latest batch of Young Company graduates, yet another group of young actors are released into the local theatre scene. Thanks to Jenkins’ leadership and direction, it’s quite a marvel how much they’ve achieved with 1984, considering how their course simply has them meeting once a week. Whether or not they choose to pursue theatre full-time, or simply keep the experience as a fond memory to be cherished, what matters most is that we do have more youths appreciating the craft and work that goes into creating theatre, and grow the arts scene along with them. There is plenty of untapped talent still to be discovered, and as a single theatre community, there is always more we can do to support them and their endeavours.

1984 played at the KC Arts Centre from 22nd to 24th August 2019. Auditions for the next Young Company batch will take place on 7th September 2019, more information available here