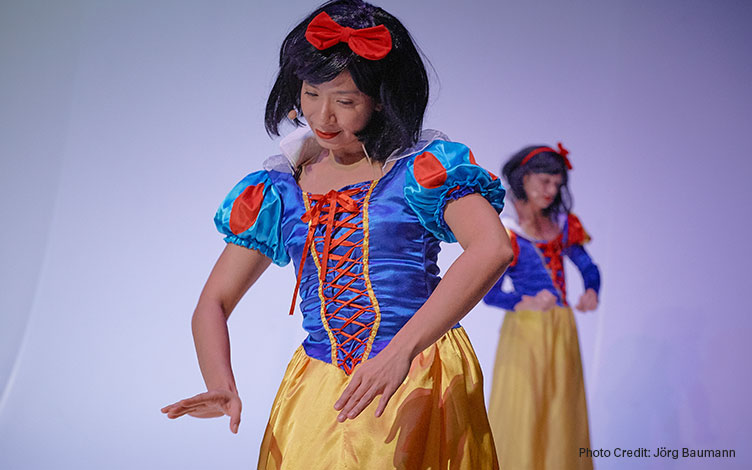 Someday my prince will come. But not if you’re Pinoy.

Growing up on a steady diet of Walt Disney’s animated films, the current generation of young adults were almost certainly bombarded with a relentless insistence of happy endings and visions of the ideal woman as a svelte, prim and proper princess. The sad reality is, the Disney empire’s brand of happiness would apply only to audiences from a certain background – Filipinas working as dancers in Disneyland Hong Kong, for example, will never get a chance to play leading lady, relegated instead to the margins as nameless monkeys or corals.

In response to this phenomenon, Filipina dancer Eisa Jocson, together with performance artist Russ Ligtas, have developed Princess, in which both artists attempt to insert themselves into the Disney narrative and claim it for themselves, subverting all expectations of the Disney ‘norm’, and confronting the cultural baggage laid on them. As the performance begins, both Jocson and Ligtas come onstage in similar Snow White costumes, the epitome of the ‘happy girl’ archetype across Disney princesses, taking a bow and thanking the audience for coming to watch the show, as if subservient.

As they sway side by side, they each break into a smile, as the soundscape comes in. What is so interesting about Princess is how unlike most contemporary dance shows, Jocson and Ligtas have also incorporated elements of speech, audience interaction and singing into the performance as well, as they use falsettos and repeat ‘I like it here!’ over and over again, as if desperately convincing themselves of their happiness and satisfaction. Essentially caricatures of the Snow White character, their outfits complete with red shoes and Snow White-print socks, we feel as if they’re waiting for some kind of happily ever after to come their way, a secret sorrow developing quietly. 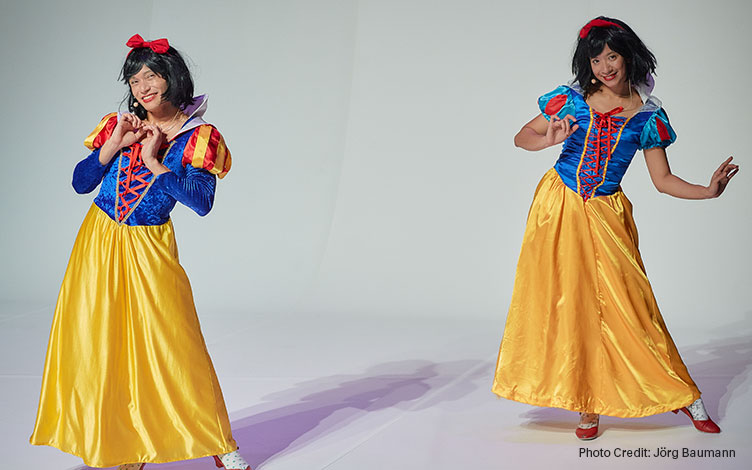 Suppressing their frustrations, they wake up to each new day as they go through the motions over and over again, slowly growing more and more disenchanted with their lives. It reaches a point where it’s obvious they’re doing this purely out of obligation, yet strive to maintain their proper, princess-y composure as they go around the audience introducing themselves – “Hi, I’m White! Snow White!” in a stereotypically Disney-type voice, darkly comical as if insisting on their pretend whiteness in spite of their obvious brown skin. They pause onstage, conversing in their first language Tagalog all of a sudden, clearly to speak in a language we do not understand in a private dialogue between each other. We catch snatches of talk about their Sunday rest days, reminding us of the labour-intensive lives of Filipina domestic workers here in Singapore.

Snow White then approaches the audience and gestures for a hug. Upon receiving one, she shows off an expression of joy and relief, a hug much needed in a working world that lacks love, lacks warmth and lacks recognition for her efforts. She laughs hysterically before breaking down into confused sobbing, before both dancers begin to apologise profusely, fear in their eyes for acting out of line. They tell us we do not know what they’ve been through, expressing shame and apology over and over while they look directly at us, creating an uncomfortable atmosphere.

Bursting into an angry tirade of frustration and rage, almost shouting at the audience, they then collapse into a look of vulnerability, looking at us before looking at each other and breaking into a Disney-esque song before stripping off the Snow White costume to reveal themselves underneath it all, in identical dresses and hoping they can finally express their true selves. They stand still as music plays in the background, and just when you think they’re about to begin again, the performance ends.

With Princess then, Jocson and Ligtas manage to upend the image of Snow White and wield it as a lethal symbol of cultural oppression and systemic discrimination, a representation of the inequalities of labour and the ever-growing frustrations and disenchantment with life as a result. Snow White may sing that some day, her prince will come, but for these dancers, that’s a happy ending that will only ever remain the stuff of fairy tales and animated film.

Princess played on 11th and 12th October 2019 at the Esplanade Theatre Studio as part of da:ns festival 2019.