Childhood comes back to haunt these siblings in the final edition of the Page on Stage 2019.

You ever go to a family gathering and meet all your relatives, each one taking their turn to reminisce about the past? That’s kind of what Seven Views of Redhill feels like, only a lot more dramatic, and a lot more bittersweet.

Rounding off the Arts House’s The Page on Stage series for 2019, Seven Views of Redhill sees director Lee Thean-jeen (Code of Law) adapt Dora Tan’s short story of the same name for the stage, as we listen to seven characters each recall their memories living in Redhill back in the 1950s. 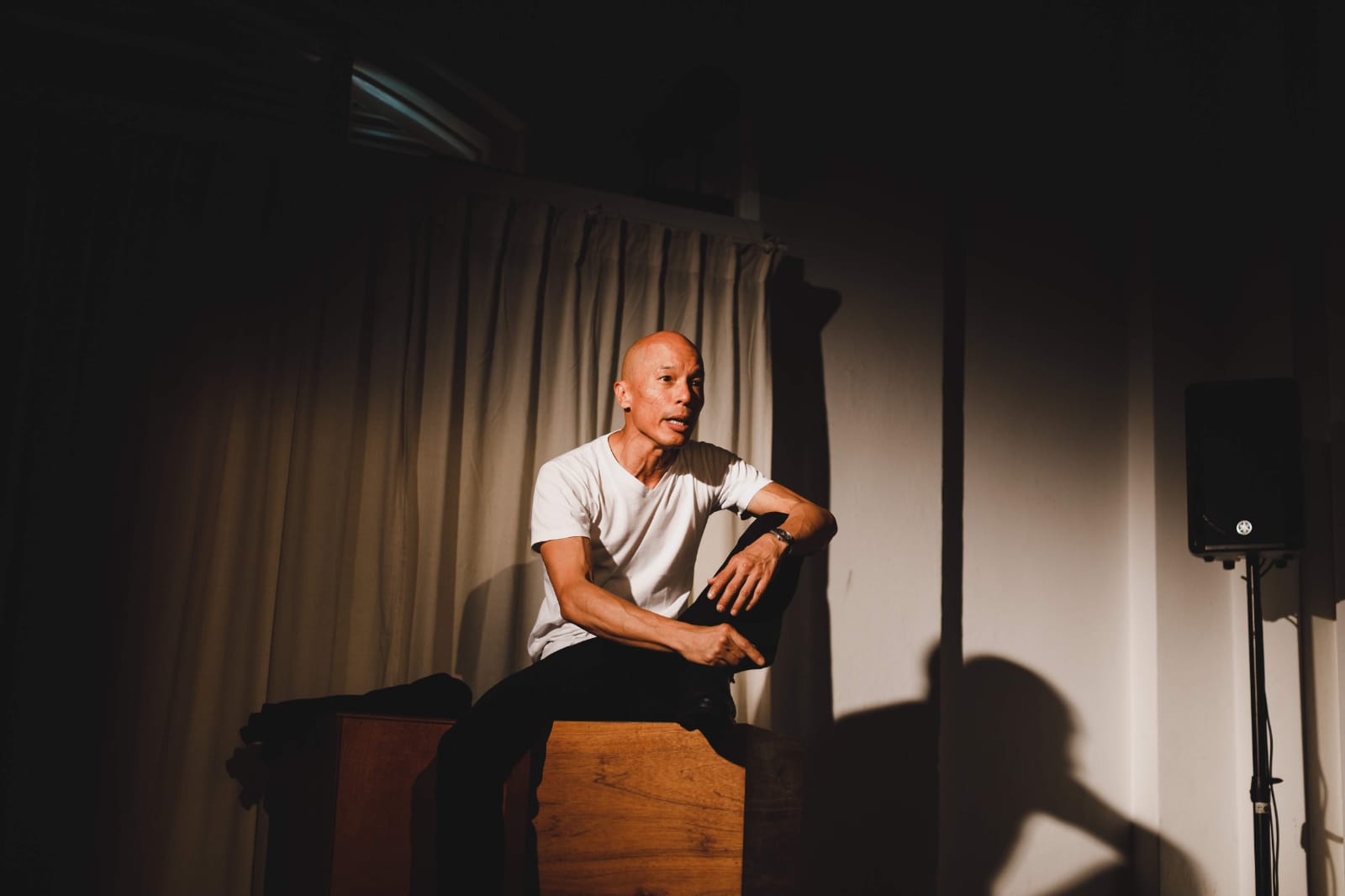 Right from the very beginning of the performance, the performers enter the space in darkness, laughing before they take up their positions in darkness. Director Lee, as a veteran of the screen, seems to frame the show like a documentary, as we open on a series of old photos of Redhill, the voiceover of an old lady speaking in dialect plays over it. The scene is set, and she recalls how people associate Redhill with its many legends (humourously questioning their realism with common sense), and how people have long forgotten the truth behind the real people living on it, a district with most of its people living in poverty.

Seven Views of Redhill then, is about excavating the district’s past and to showcase the lives of the six siblings who once lived there (all played by just Janice and Yu-beng), each one talking in turn like a series of interviews compiled into a single documentary, as we listen to them tell us about their childhoods. 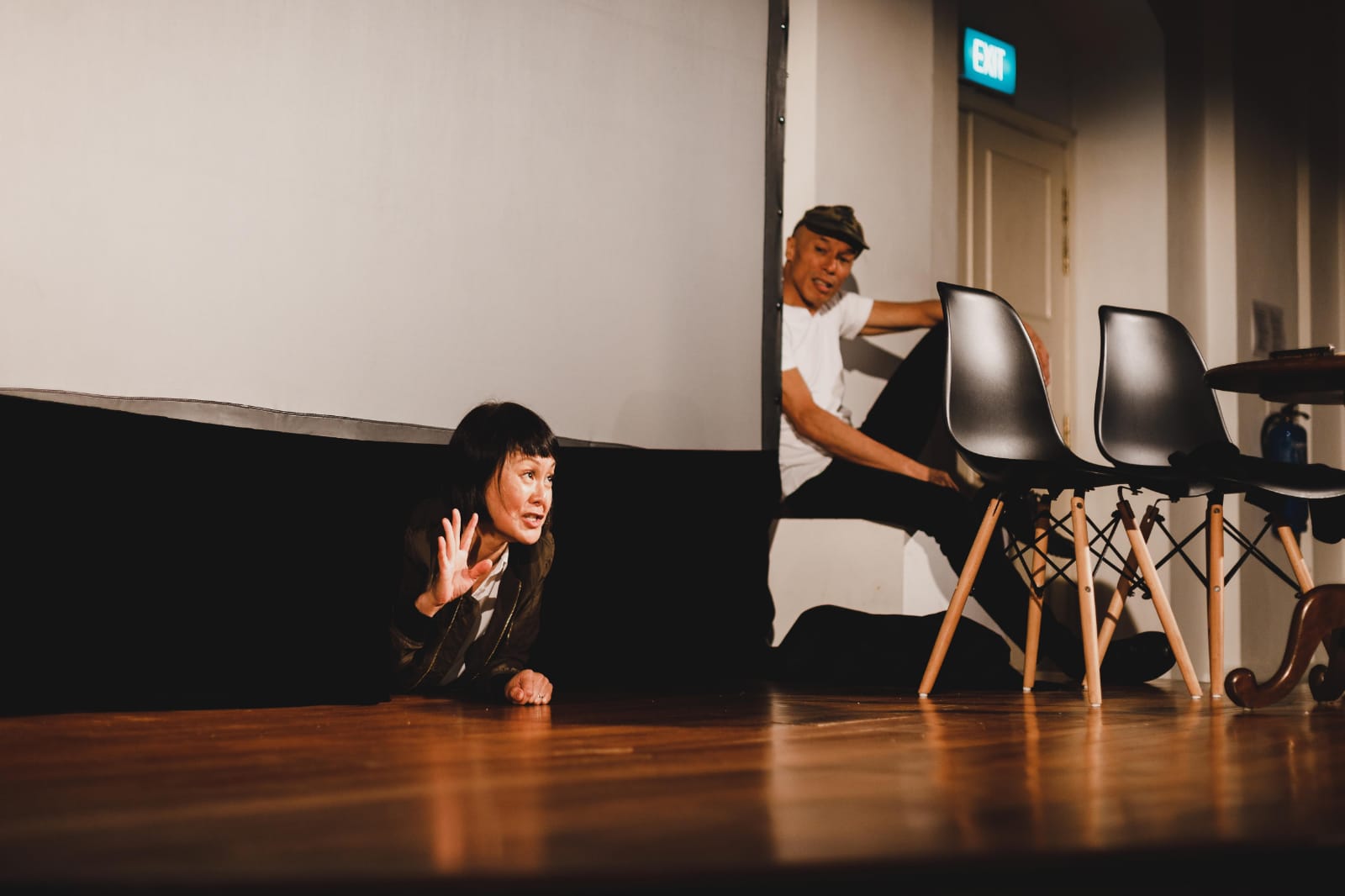 While it is never explicitly mentioned, it is heavily suggested that the siblings have gathered at the funeral of a close family member, indicated by the white tops they don (a colour family members of the deceased wear during a wake) and snacks on a table one would eat during the wake itself, complete with a folded paper box for trash. There is a subtle sadness in the air as we listen to each sibling speak, recalling various incidents in their childhoods that have stuck with them throughout the years. A violent fight between their alcoholic and gambling addicted parents leaves parang marks etched onto a door, still visible even in present day. All four sisters and both parents are squeezed into a single room to sleep each night. Children are taken into foster care so parents can make ends meet.

Yet these memories are tinged with an odd happiness amidst their circumstances, gleaning joy from some of the simplest of affairs in daily life, be it the sheer wonder from exploring the neighbourhood after school, or seeking solace in each other as they recall being tucked in to bed and sung to sleep. Childhood, for these siblings, is a painful yet nostalgic affair – relieved that their poorest days are over, yet unable to move on from the past, made all the more vivid with rich, detailed descriptions, such as references to the ‘tok-tok’ prawn mee of old, to neighbours and their children cleaning up public buses just to make ends meet, to the entire block gathered at the window to watch a small black and white television (even when the broadcast was interrupted). 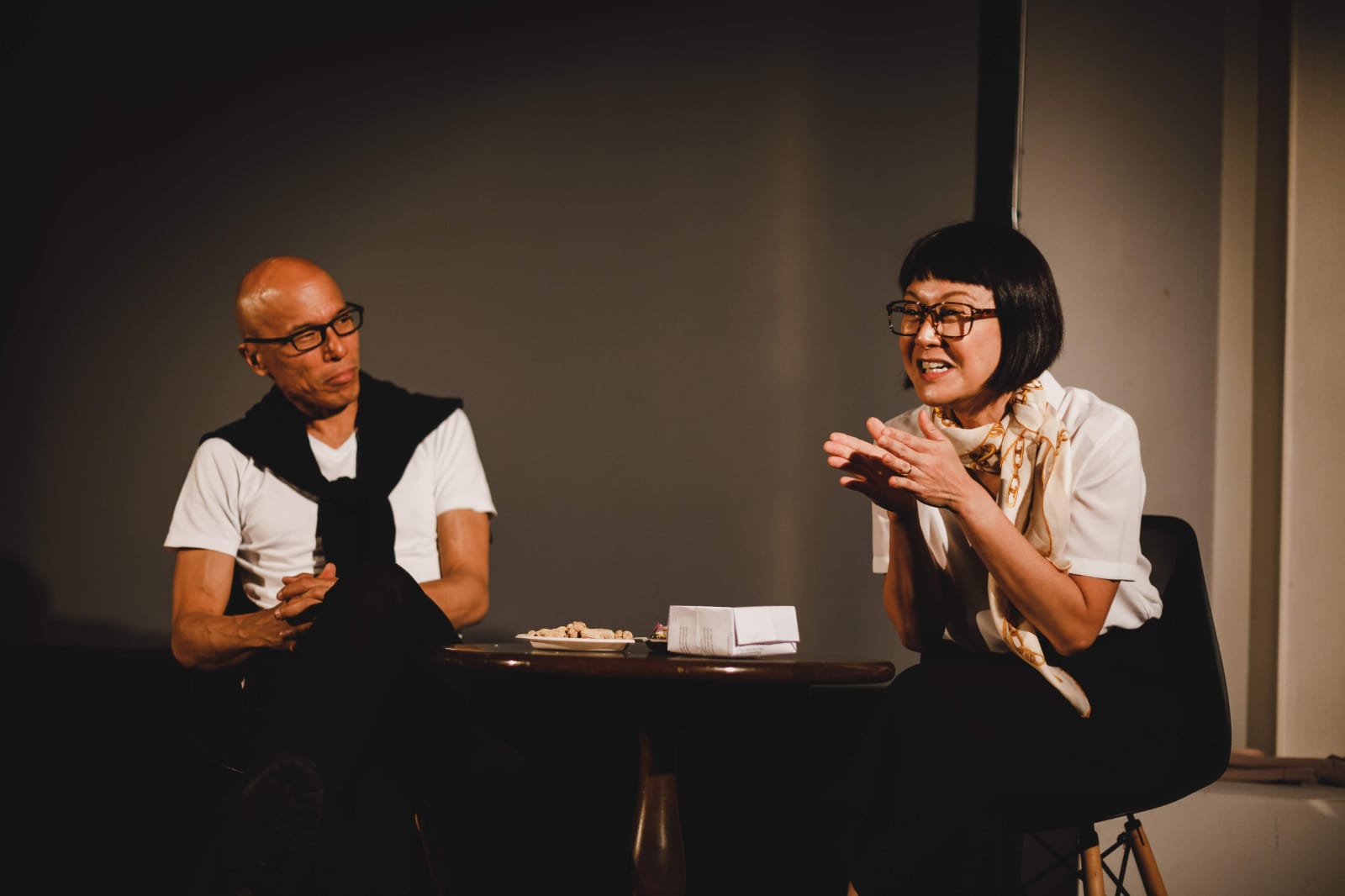 One thing that strikes us is the underlying desire each and every sibling expresses to leave Redhill, the memories often painful or the association with it haunting. Lim Yu-beng, for example, plays two brothers who are polar opposites in character – one a loutish man, the other a filial intellectual. Yet each desperately want better lives for themselves, and finding the solution in their own ways – the former finally getting ‘new clothes’ for the first time upon entering the army (his fondness for the army evidenced by the jockey cap he dons), and the latter winning a scholarship to London to literally leave Redhill behind.

In her performance, Janice gets a chance to show off some of her strongest acting work in recent years, clearly using both her voice and physicality to give each of the four sisters she plays a distinct character. A challenging set of roles, Janice manages to land most of her lines to devastating effect, and clearly captures each sister’s personality each time she switches role and transits from scene to scene, simply through her posture, energy and the way she carries herself, incredibly important to delivering each sister’s story in such a short span of time and a challenge for most actors to bring out. Particular praise goes out to her portrayal of the eldest sister, as she leaps onto table tops while re-enacting her parents’ fight, tears practically threatening to fall from her eyes as she wrestles with this childhood trauma, one that leads her to detest home by filling her schedule with after school activities that stretch late into the night, just to avoid going home. 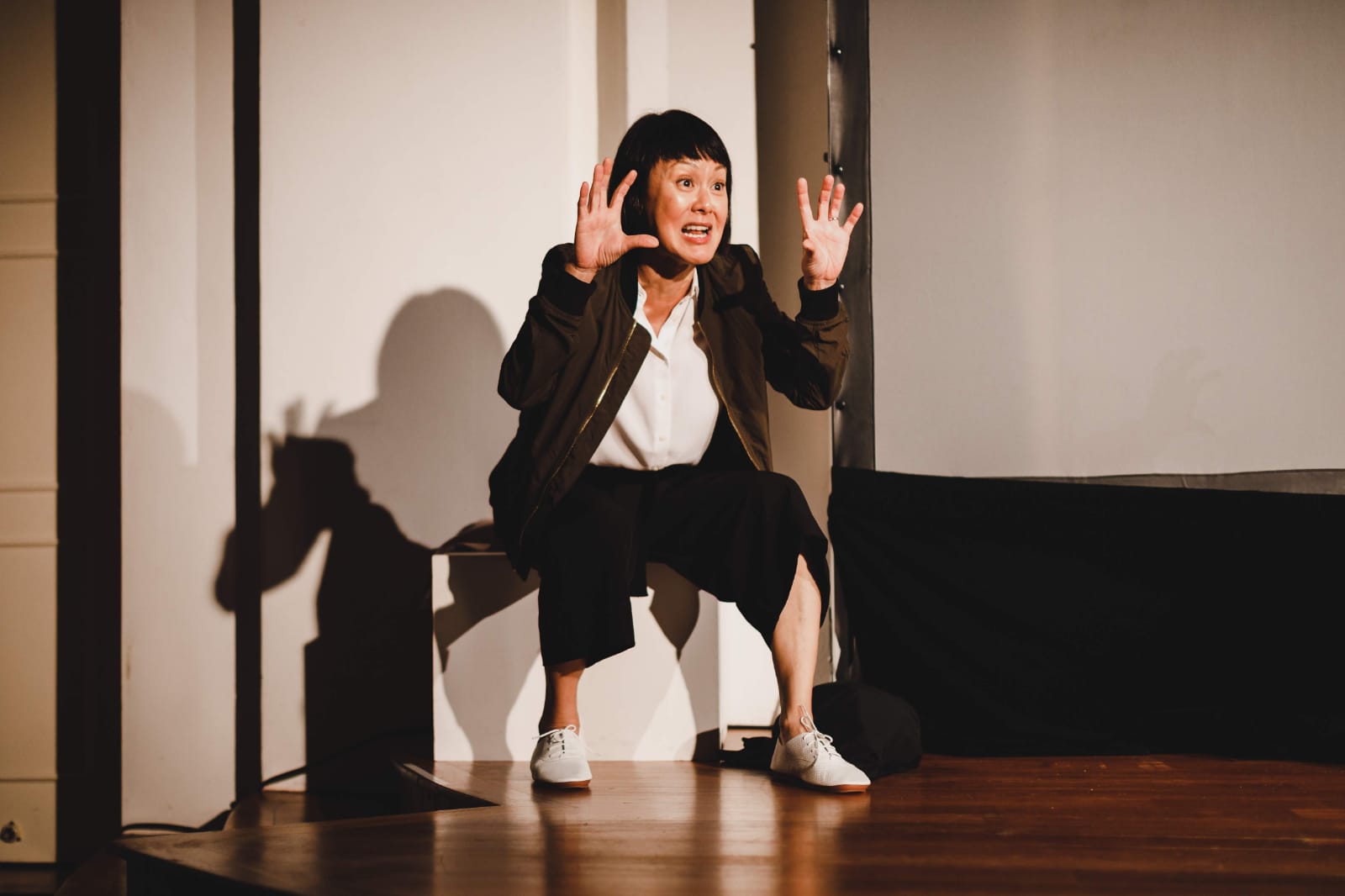 With six characters played by just two actors, Seven Views of Redhill runs the high risk of confusing audiences when one actor transits from one character to another. It is to director Lee’s credit then that the blocking of the play is almost television-like, where his direction focuses audience’s attention on a specific segment of the space, allowing us to concentrate wholly on each monologue being performed and helping us absorb all that is being said in a short amount of time and still be clear about each of the six characters’ individual stories. 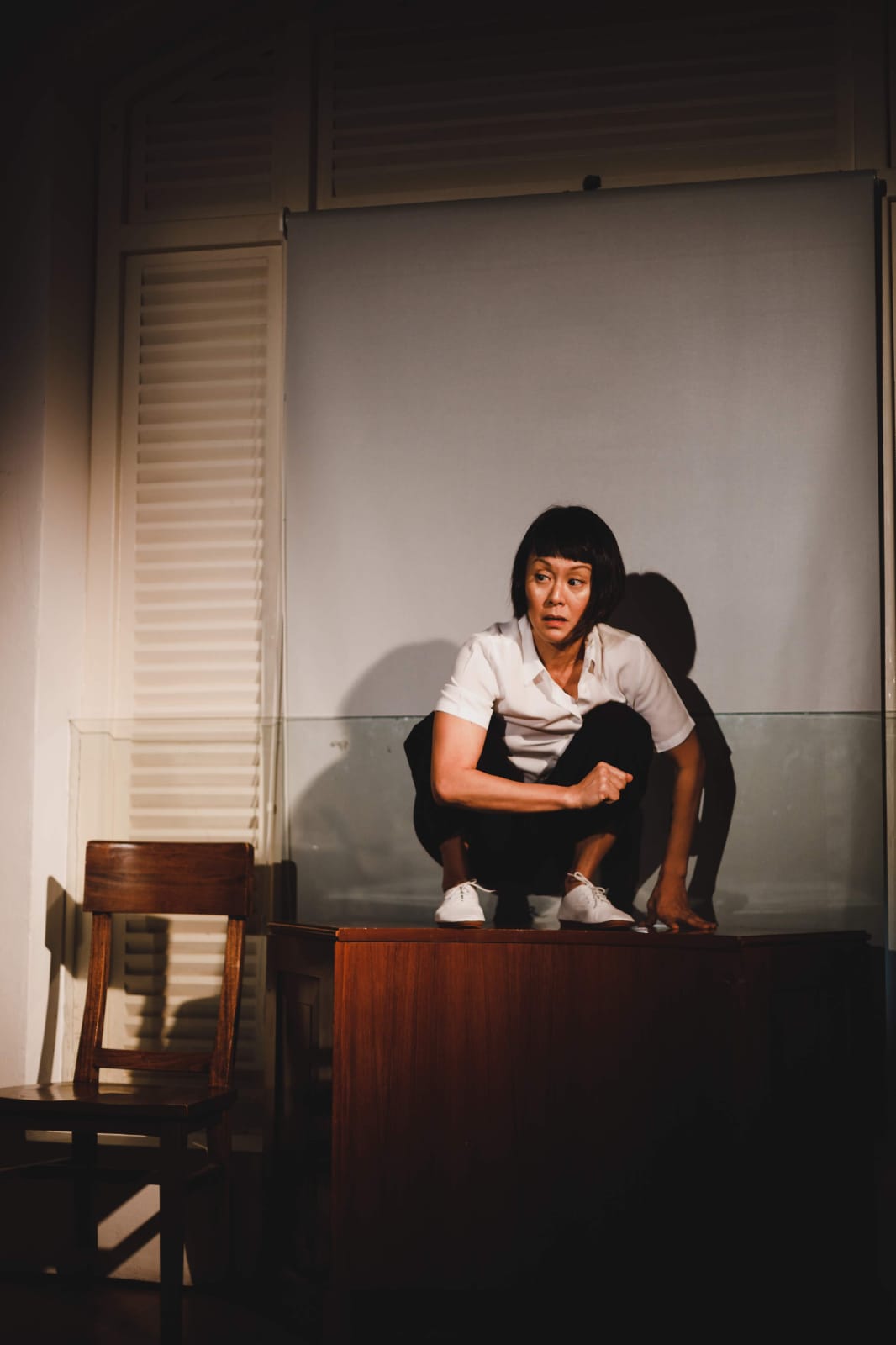 Towards the end of the play, we’re presented with another series of photos of Redhill, now showing coloured photos of the present, as the old lady returns to tell us about the present day and how things have changed in Redhill. This provides a base for the siblings to play off, as they too reflect on how much they’ve moved on since leaving the district, successfully escaping poverty to find success in adulthood. Yet, this is a play that feels incomplete, leaving audiences with plenty of unanswered questions and stories left unsaid as we leave this family behind.

As ready as they are to let go of the past, there is still so much we want to know about them, perhaps prompting us to find out more about our own family histories and the Singapore of before that they grew up in. With the sound of rain falling giving way to Yu-beng playing the harmonica, as if the vestiges of the past still hang in the atmosphere, Seven Views of Redhill ends with us still curious after having witnessed these flashes of a family’s past, a respectable finale to The Page on Stage 2019.

Seven Views Of Redhill played from 10th to 13th October 2019 at The Arts House.

0 comments on “Review: The Page on Stage – Seven Views of Redhill”