Finding tenderness and connection in the face of seemingly irreconcilable differences.

Raimund Hoghe is a shorter than average 70-year old German man with a discernible hunchback, pale and serious. Takashi Ueno is a much younger Japanese man of average height, slim and lithe. One wonders how the two might even begin to find a point of connection with each other with these distinct physical builds and backgrounds, yet, as Pas de Deux shows, even the most unlikely of partners can come together to perform a surprisingly tender, beautiful work.

Like its name suggests, Pas de Deux makes reference to the ballet duet style of the same name. But the work is so named almost ironically, with both Hoghe and Ueno rarely performing together for the better part of the two hour performance. Throughout, the stage is completely bare, a full wash lighting bearing down on both performers. All eyes are on their performance, both dressed in simple, black long-sleeved tops and pants.

There is something oddly ceremonial about the performance, as Ueno enters holding a wooden Japanese water ladle, slowly pouring it on his forearm, while on the other side, Hoghe comes out with a wagasa (Japanese parasol) open above his head. Both don the Japanese geta, wooden platform sandals, as they slowly make their way around the stage’s perimeter to meet each other, and lay down their respective props. There is something delicate and precarious about their movements, approaching the audience slowly, supporting each other. 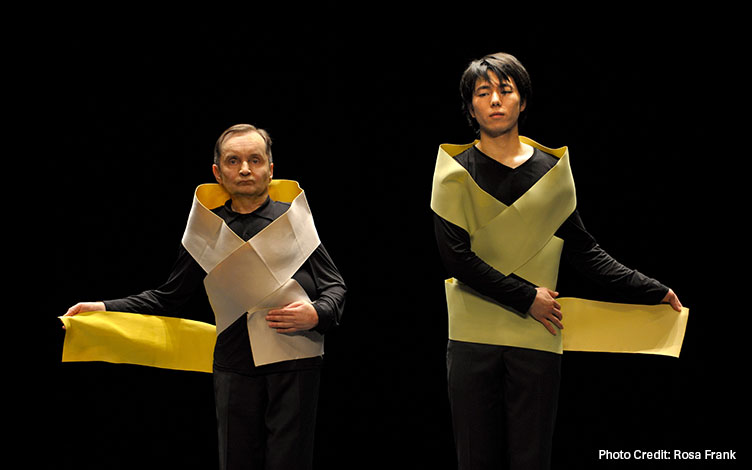 From here, we bear witness to a series of scenes, with everything from classical singers such as Victoria de los Ángeles and Janet Baker, to modern stars such as Edith Piaf and Judy Garland (with perhaps over 30 tracks used across the whole performance). Each dancer responds to the music in completely different ways – Ueno dances the tango, clutching a flower between his teeth with a patterned Japanese cloth tied around his waist in an obi, as he becomes a dashing Spanish hero, thrusting and stepping in time to the music. He delicately wriggles his way out of the obi, leaving it to one side before he lays down to rest.

Hoghe then emerges from the wings in sunglasses, approaching the discarded obi and wears it – not on his waist but his head, and grabs a flower, poised between his fingers like a cigarette, a film star at the height of the black and white era not unlike Audrey Hepburn in Breakfast at Tiffany’s. In the hands of the two dancers, items and objects take on new meaning and significance, and the idea of culture belonging to a single group of people dissolved, allowed to be played with.

For the most part however, Pas de Deux speaks of an intense loneliness within both men, existing as solitary figures with each of their solos. One sequence sees Hoghe emerging with a leather briefcase, which he opens up to reveal an iPad playing a black and white video of German dancer Gret Palucca performing, with Hoghe dancing along while holding the briefcase still, a deep respect and longing for her before laying down beside it. Later on, Ueno echoes these movements in one of his own solos, arching his back to the same music. We think of these two men as belonging to separate eras, impossibly distant from each other, something inherently sad when the two come together and touch hands for the briefest of moments before separating again. 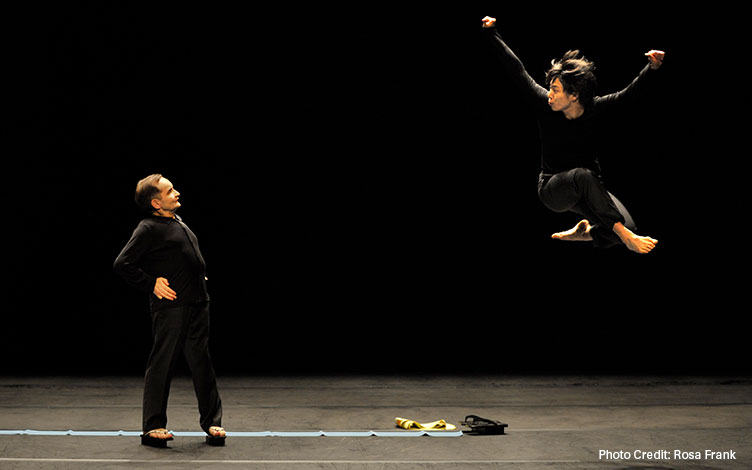 But everything changes when the piece takes a sudden tonal shift, as we hear a voiceover in Japanese, with Hoghe translating into how people in Europe were afraid of the rain following Chernobyl, while in Hiroshima, the patterns of the kimonos were burned on the skin of women. Shared nuclear fear and history bring East and West together, the fundamental connective tissue of human suffering. They each take off their shirts and stretch them out in front of their bodies, backs touching each other and navigating the space together, one with their histories of pain.

But pain is not forever, and the voiceover goes on to talk about the surprising flourish of greenery that grew in the wake of Hiroshima. We hear Madonna recite Pablo Neruda’s poem “If You Forget Me”, and it seems that the two were perhaps, always destined for each other after all. They sit down and face each other, each holding a piece of cloth, simultaneously sliding theirs across the floor in an exchange, endlessly, over and over again as the lights at last fade to black. This then, is the solution to our distance, to trust in each other and exchange in our cultures, our stories, our pain, on and on, until that distance recedes, to a point where we can finally touch, and meet as equals despite differences.

da:ns festival 2019 ran from 10th to 20th October 2019 at the Esplanade. For full programme, visit their website here