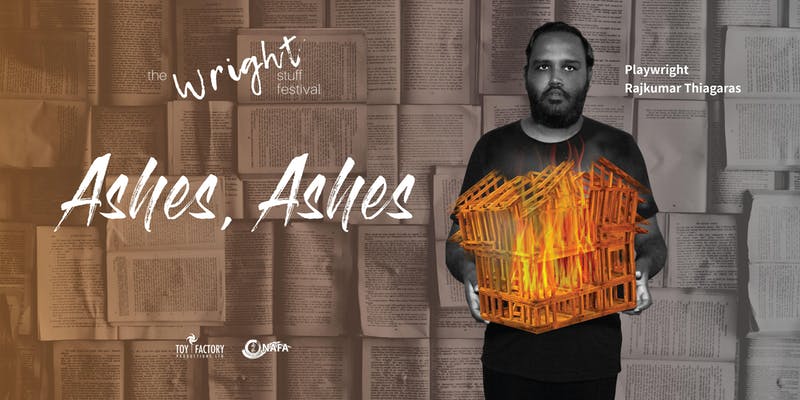 Some things are better left fed to the flames.

Two years ago, the Straits Times reported on the demolition of Lakshmi Villa, a generations old family home that had grown too costly to maintain, with the land sold off for development of new condominiums. Taking inspiration from this story, Rajkumar Thiagaras wrote his debut play Ashes, Ashes, presented as part of Toy Factory’s Wright Stuff Festival 2019.

Directed by Andy Pang, Ashes, Ashes is set in the fictitious Janaki Vilas, the childhood home of the elderly Janaki (Daya AJ), who returns to visit it one last time before it is torn down. Once there, the place sets off a chain of memories as she dives into a lifetime of trauma and guilt following a devastating fire that claims the life of all four of her siblings. 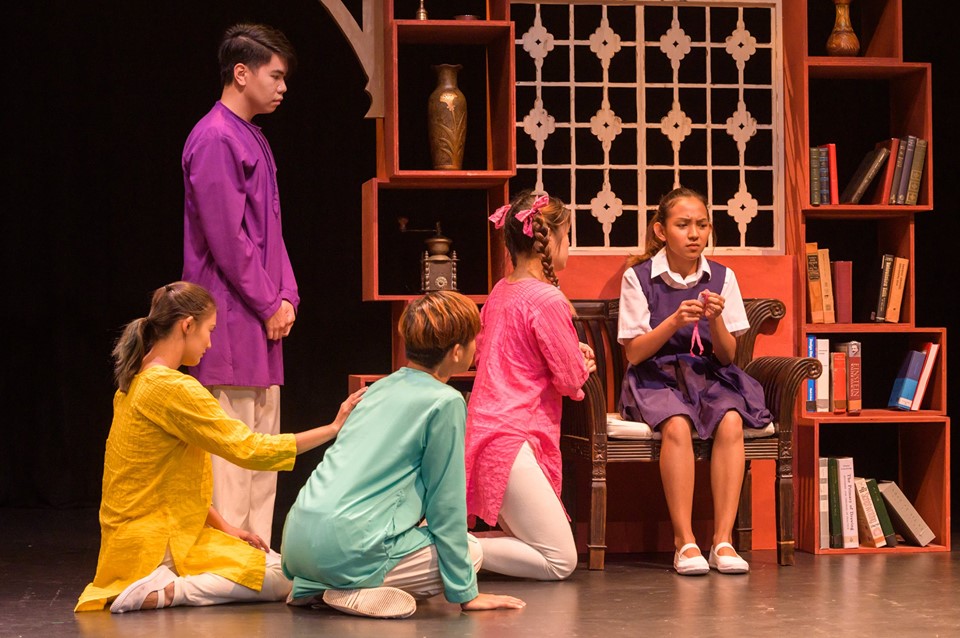 Throughout the performance, Ashes, Ashes often falls flat, suffering from a bloat of characters serving little to no purpose and a lack of dramaturgy. The backdrop by Vivien Lau depicting the villa’s interior, while detailed, isn’t enough to represent the grandeur of the mansion as a whole. Despite the framing device being the villa being torn down, there is never any description or time taken to actually show that any characters care about the building itself, diminishing any form of connection we have to this place with so many traumatic memories.

Much of the story itself focuses on the central narrative of Janaki attempting to come to terms with her siblings’ deaths, suffering from survivor’s guilt and haunted by their spirits throughout her life. But it is curious that we feel almost nothing for their deaths, despite witnessing it firsthand, whether it’s due to the depiction of the fire that claims them, unable to decide if it wanted to be artistic or graphic, or the fact that even Janaki’s constantly bickering parents show almost no sadness for the loss of four of their children. 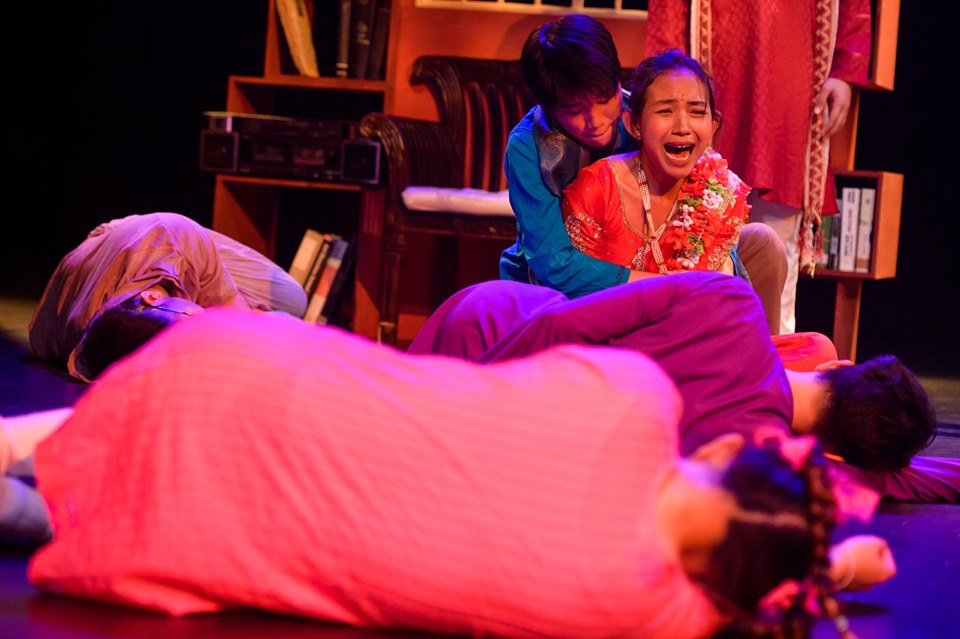 Perhaps most problematic of all is the sheer number of characters featured in Ashes, Ashes, with minor storylines given to almost all of the 15 actors that bogged the play down with unnecessary details, many of which felt forced or shoehorned into the play, and distracting audiences from the central narrative by constantly deviating from it.

Credit must be given where it is due however, and the play’s most powerful moments emerge from scenes involving real Hindu rituals incorporated into the plot, from wearing flower garlands to the offerings of fruit to the deceased, to the marriage preparations, including even details such as the red string on her body to represent a married woman. Watching Janaki transform from blushing bride to haggard crone before our eyes gives the impression of a film-like time-lapse, an interesting idea to stage. 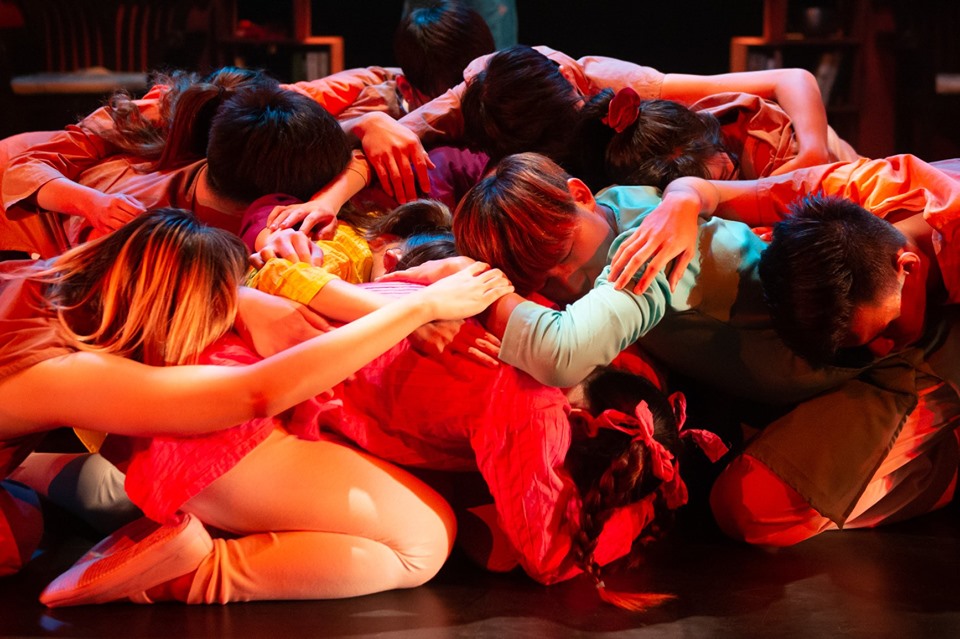 Towards the end of Ashes, Ashes, there is a genuinely beautiful scene as Janaki makes peace with her inner demons at last before dying. Re-emerging with her siblings all dressed in white, representing their spirits, they draw kolam in chalk all over the floor, while her daughter speaks about her mother’s obsession with the kolam (one of the play’s more effective monologues). A magnificent funeral procession carrying Janaki’s body moves out of the house and literally out of the theatre, as if her spirit was finally laid to rest and finding peace at last. This would have made for a perfect ending, if not for the scenes that follow. We see the destruction of the house as the spirits of the deceased look on in horror, detracting from the focus on Janaki moving on from her trauma, and the final message the play is trying to bring across uncertain.

By the end of Ashes, Ashes, one is left genuinely confused about what this play is trying to achieve. Certainly, we enjoyed the valiant attempts to showcase Hindu culture onstage, and could see the potential behind this piece, but somewhere along the way, the Wright Stuff process of guidance must have tripped up to result in such an unfocused piece that itself seems often unclear of what it wants to do. With too many characters, too many plot lines and a need for greater clarity of intent, Ashes, Ashes is one production that may have been best left to simmer a little longer before taking to the stage.