Since the last time we spoke to author Akshita Nanda, her life has taken quite the turn. No longer an arts correspondent with The Straits Times, Akshita has gone back to hitting the books, not only pursuing a Masters in International Affairs but also getting ready to release her sophomore novel – Beauty Queens of Bishan.

From its blurb alone, Beauty Queens of Bishan already feels like quite a departure from her debut novel Nimita’s Place. Where Nimita’s Place was about an Indian national finding her place in Singapore, Beauty Queens of Bishan instead, is poised as a ‘light-hearted story’ that follows a group of beauty parlours whose co-existence is threatened when a swanky new salon opens. “People like to conflate the idea that Nimita and I are the same person, but she really is an entirely fictional character,” says Akshita. “It’s hard to change people’s perceptions of you based on a work you’ve already put out, but thankfully, when the staged reading happened this year, I managed to get a whole different audience, with director Edith Podesta capturing the heart of the book and what I wanted to say, and people got a whole new perspective of how they might have understood it compared to just reading it.”

“Compared to Nimita’s Place,” she continues. “Beauty Queens of Bishan is writing about Singapore from an insider’s point of view, versus writing from an outsider looking in and experiencing Singapore from that perspective. I kind of ended up writing a book that was like Crazy Rich Asians for Singaporeans instead!”

Speaking on her inspiration behind the novel, and why it is specifically set in Bishan (besides the alliteration in the title). Akshita explains: “This is a book I actually already wanted to write 8 years ago. The SPH office is so close to Bishan, and there are times I’d walk over and notice how there were so many beauty parlours in the area. I have several friends and acquaintances who are beauticians, and apparently, it’s the easiest entrepreneurial job for a married woman with children to do, especially for those coming from more conservative communities. A lot of people I know actually operate beauty parlours from a one-room HDB, and there are so many issues they face running a business from their own home, with kids in the same venue and not being able to openly advertise. Seeing them through this entrepreneurial lens is just something that hasn’t really been done before.”

“One thing that fascinates me about beauty parlours is that they’re a paradox, acting as both safe and unsafe spaces for women,” she continues. “You can go there, get pampered, forget your troubles, and always be real and talk to your beautician. But that relationship is a double-edged sword, because that intimacy means they’ll be straight with you and tell you ‘oh you’re getting fat, you have all these open pores, and subject you to very harsh standards of beauty.” 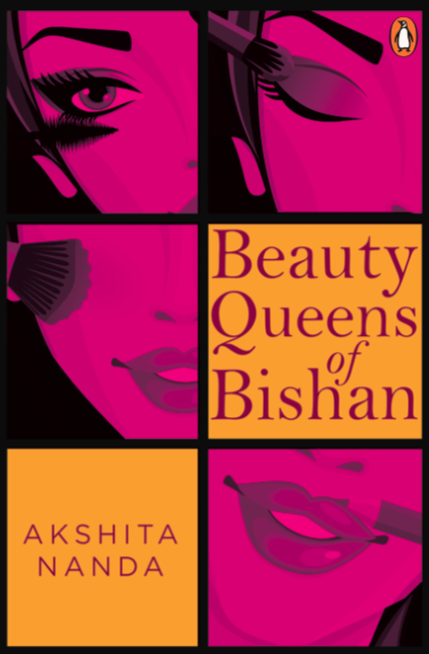 Set in 2017, against the backdrop of a world that had just voted in Donald Trump as President of the United States of America, Beauty Queens of Bishan then, is a novel that’s seemingly all about contradictions coexisting simultaneously. Akshita elaborates: “There’s this huge hypocrisy in society where women are squeezed into ideal shapes of beauty, and then mocked for attempting to conform to that ideal shape that society expects. In a way, that also leads to how beauty pageants can be simultaneously seen as both feminist and anti-feminist. There are so many constructed standards across Asian societies that are flawed, like how fair skin is better and if you look or speak a certain way, you’re deemed more or less worthy of respect.”

“I think about feminism, and how it’s such a loaded word,” she adds. “As human beings, we’re very restricted by language, where even the same word could mean different things in our heads – ‘breakfast’ for instance might be thosai for you and kaya toast for me. We exist in a world where language is gendered, and where people have this idea that an athlete or a hero must be male. Language is a dicey way to represent and express our thoughts with each other, and I’m hoping my work helps us move towards a world that recognises women’s stories as universal stories too.”

Going a little deeper into the plot, Beauty Queens of Bishan pits the new salon owner April Chua against the 13 pre-existing beauty salons, as she attempts to control the competition with a new society – the cheekily named NAILSO (Neighbourhood Alliance of Independent Lifestyle Service Operators). April and arch-rival Gurpreet Kaur are set to go head-to-head in a final showdown with clients in the upcoming Grand Glam Singapore Beauty contest, with the winner deciding the outcome of the Bishan beauty parlour scene forever. “I have a range of characters that I introduce by way of positioning them as stereotypes,” says Akshita. “Gurpreet’s client for example is Tara Chopra, who immediately brings to mind Bollywood movies and Indians in public office and high society, while April’s client is Candy Kang, who seems just like a woman who married a rich billionaire, but is revealed to be someone from a lower middle class HDB background who had to claw her way to the top.”

“When I start with stereotypes, it’s an easy way for readers to enter the story, before I flip these on their head and show readers why they should question these assumptions and stereotypes,” she continues. “In fact, Beauty Queens of Bishan might even come across as ‘chick lit’, which people perceive to be unintelligent, and that’s a stereotype that we should flip instead. My book offers a look at popularity contests, and examining how we all want to be seen, recognised and appreciated, and the range of roles society has fit us into. So maybe we should embrace the genre instead, and I encourage those coming to the book launch to come in hot pink!”

Compared to Nimita’s Place, with Beauty Queens of Bishan, Akshita has also adopted a new publisher for this book, with Penguin Random House. Says Akshita: “I will always be thankful for Epigram that they took a chance on Nimita’s Place.Without them, Nimita’s Place would never have found a home, and I’m glad they chose to tell this story, of someone who isn’t Chinese, and someone who comes into Singapore and learns to be Singaporean. And I’m glad that people can see and appreciate that, with people like Sharlene Teo (author of Ponti) pointing it out as one of the five best books to read to understand Singapore!”

“We all grew up reading Penguin, so I was really happy when they told me they wanted to publish my book, thanks to my agent,” she continues. “It’s a very different set of publishing norms and practices than how I worked with Epigram. Since Penguin has an international team, the group of editors who saw to my book were all non-Singaporean, and it helped to hear their feedback on what they understood or didn’t understand, which allowed me to pinpoint the parts of my book to make clearer, more precise and more exciting for readers.”

Beyond the launch of Beauty Queens of Bishan, Akshita is already hard at work on her third book, which she promises will see the light of day very soon. “I started writing as a child, and at the age of 16 wrote a fanfiction novel,” she says. “I’ve got all these trunk novels that will probaby never be published, but maybe, some day I’ll have enough experience and go back to complete them.”

“I like to think that with every book I write, I become a better human,” Akshita concludes. “Like Terry Pratchett says, every book starts off with me telling this story to myself. Then by editing and reworking this story for readers, I encounter my own prejudices and aspirations and learn to make peace with that along the way. Over time, my style never really changes, but my perspective and lens by which I see the world, does.”

Catch Akshita Nanda at the Singapore Writers Festival 2019, with Writing as Author-Journalists and Not Here, Not There, and attend the launch of Beauty Queens of Bishan on 3rd November 2019 at The Arts House.

0 comments on “The Banter: An Interview with Akshita Nanda, Author of Beauty Queens of Bishan”