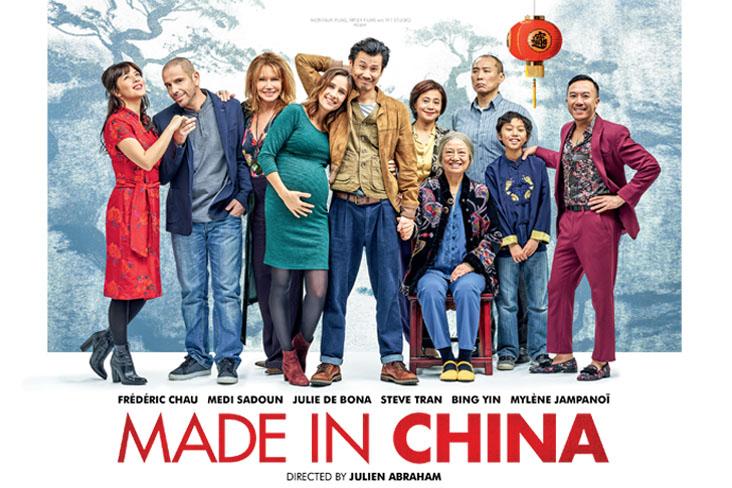 Cultures and beliefs may clash, but family always comes first.

About 1 million citizens of Asian origin live in France, making up approximately 1.5% of the country’s entire population. As minorities in the country, it’s no surprise that while the French are certainly aware of their existence, they may not necessarily have fully absorbed or integrated them into mainstream French culture, leaving much of their practices and customs a mystery to the average non-Asian French person. And that’s precisely where Made In China comes in (directed by Julien Abraham), a sincere showcase of the French-Chinese community in Paris in the form of a feel-good comedy-drama film. 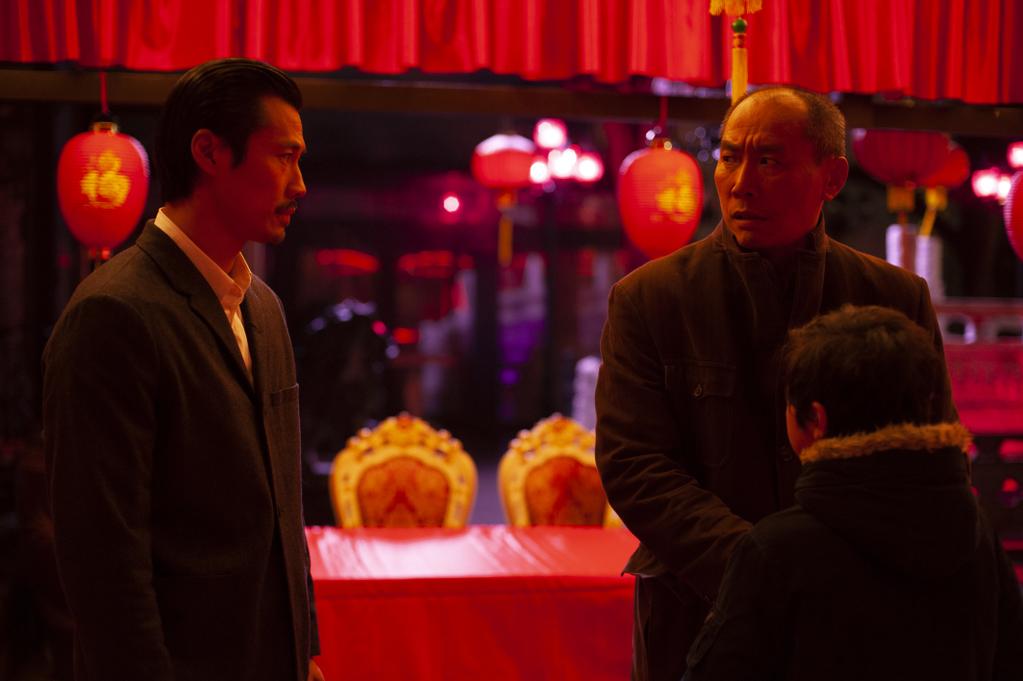 Based on an original idea by Frédéric Chau, Made In China follows young French-Chinese photographer François (Chau) whose wife Sophie (Julie de Bona) is pregnant with their child. Spurred on by her to reconnect with the family he left behind 10 years ago after a violent dispute with his father Meng (Bing Yin), and soon discovers that is may not be as easy as he thought to make amends.

With its almost all-Asian cast in a mostly white country, the most obvious and immediate point of comparison would be Crazy Rich Asians (2018), which helped bring actors of Asian origin to the forefront of Hollywood. But where Crazy Rich Asians focused primarily on showcasing the lux and opulent side of Asians, Made In France instead adopts a far more sincere approach to its presentation of Asian culture, centering on a family who are ostensibly middle-class. 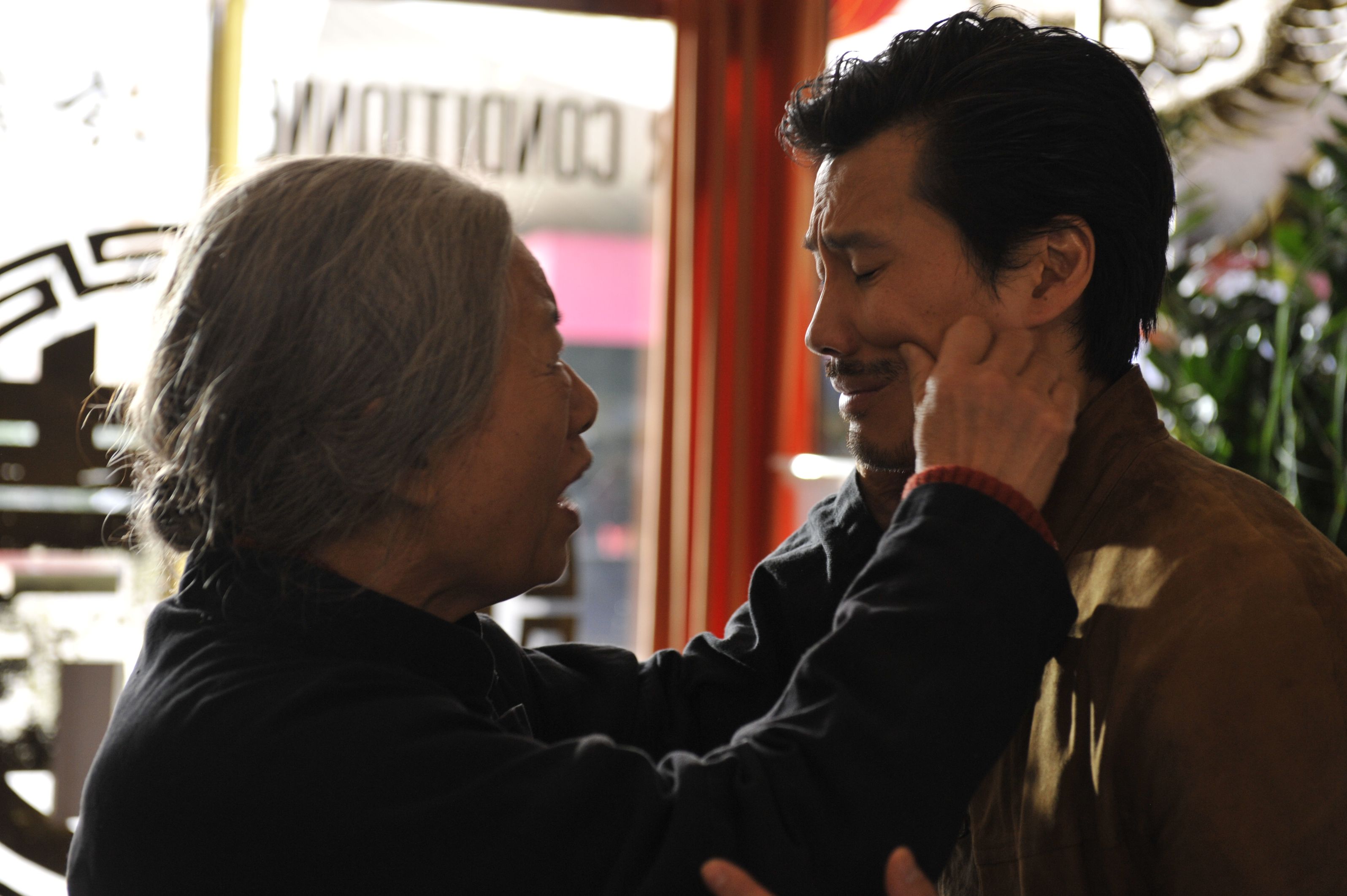 As François returns to Paris’ Chinatown, we are in turn introduced to a Buddhist temple, a Chinese wedding, and even a scene which explains the practice of internal moneylending, due to how certain policies restrict banks from lending money to the Chinese. As removed as he is from his culture for 10 years, François settles back into these easily, even joining the entire family in a rendition of ‘Mo Li Hua’ on the carpool back from paying respects to his late mother at the cemetery.

For anyone watching the film, the characters archetypes are familiar ones to easily relate to – crazy rich restaurateur cousin Félix (Steve Tran), the beautiful childhood friend cousin Lisa (Mylène Jampanoï), teenaged younger brother Stéphane (William Taing) and elderly, cheeky matriarchal figure Grandma Bin (Xing Xing Cheng). It’s rather heartwarming to watch this self-exiled man reconnect so quickly to most of his family, the joy evident on their face as they welcome him home with open arms, reminding us of how much family is held in high regard in any Asian community. 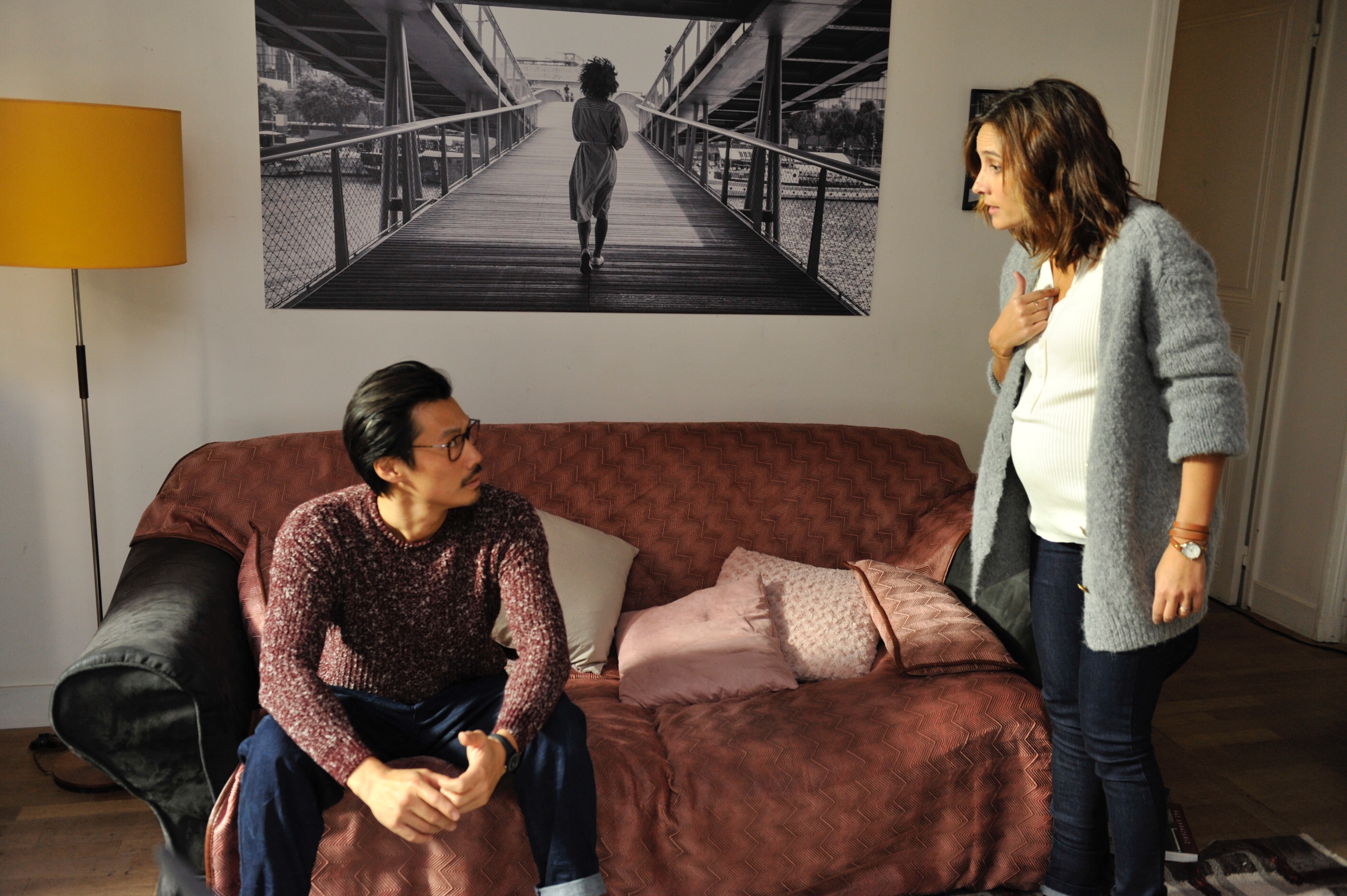 The non-Asian actors certainly aren’t forgotten in this show either, with François’ best friend Bruno (Medi Sadoun) tagging along for the adventure. While initially showcasing ignorance of the culture with almost off-colour jokes and a brashness that makes him seem like a bull in a china shop, one thinks of him as a vessel for non-Asian audiences to access the film, seeing him slowly reveal his sincerity towards educating himself and learning more about the culture as the film goes on. Meanwhile, François’ mother-in-law (the vivacious Clémentine Célarié) provides moments of comic relief, and his wife Sophie a representation of the new life and future fatherhood he’s settled into.

At the heart of Made In China however, is the central conflict between François and his father. What is perhaps most significant about the fallout between the two is that the film respects the audience enough not to reduce it to a simple case of intergenerational conflict between an angry son and stubborn father, but gives it a believable backstory familiar to anyone who’s had a parental tiff over one’s hopes and dreams, mired with a misunderstanding over the circumstances surrounding François’ mother’s death. While the film does come up with a rather audacious way to prolong the conflict between the two (something that might easily have been avoided with a text or phone call), the eventual reconciliation between the two men is heartwarming and genuine, a feeling that is evident from the looks on their faces. 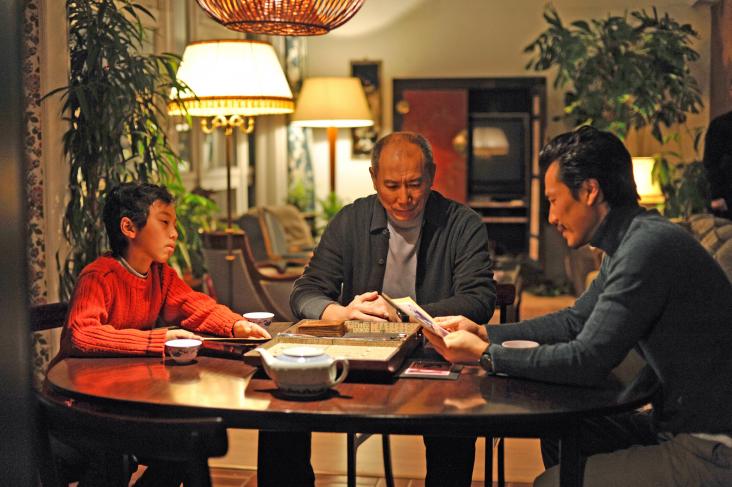 Although simple in plot, Made In China is a film that will leave you feeling warm inside thanks to its feel-good narrative, the highly likeable cast, and its bold, unabashed showcase of Chinese culture rarely, if ever seen in French cinema. Made In China begins with a series of laugh out loud jokes built on familiar racial stereotypes and misunderstandings, but by its end, transforms into a heartening showcase of the rich life of a Chinese family, hopefully marking the beginning of greater opportunities for the presentation of well-rounded Asian characters in the French media.

An Interview with Frédéric Chau 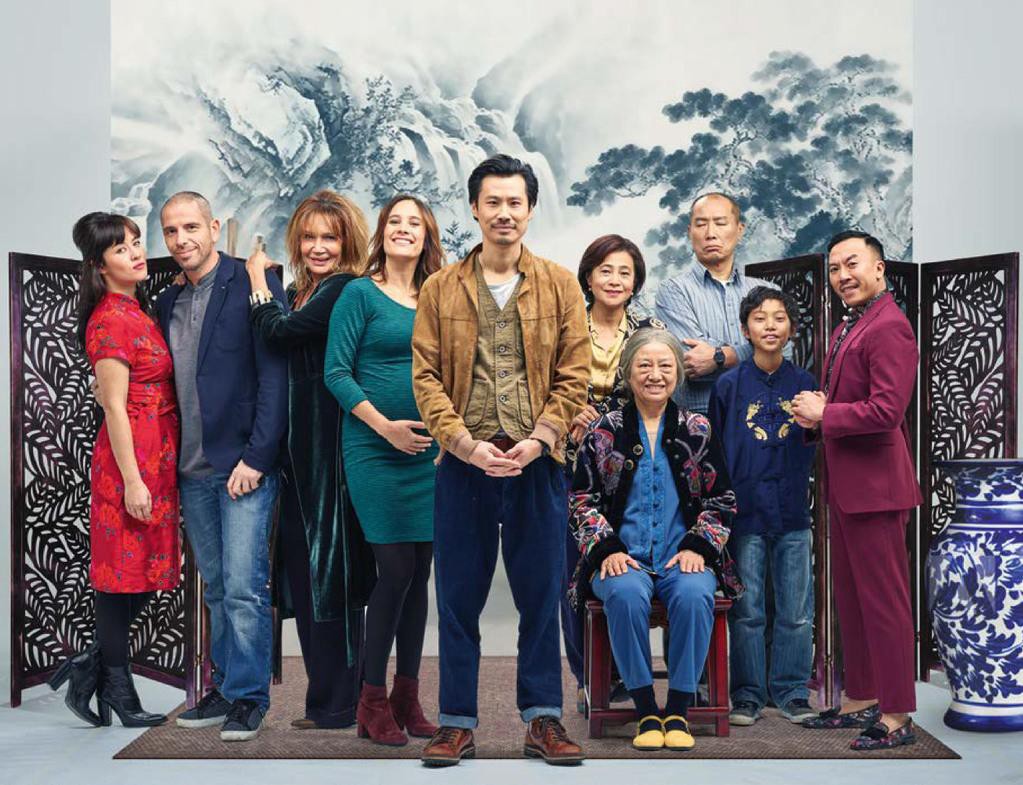 Following our screening of Made In China, we spoke to lead actor Frédéric Chau on the state of Asians in France and the process behind shooting this film. As a film based on an original idea from Frédéric, he explains that Made In China was perhaps approximately 80% based on his actual life. “One of the film’s primary goals was to create a bridge between Asian and French culture,” says Frédéric. “A lot of French people don’t know about Asian lifestyles, like the rituals at a temple or that Chinese people don’t eat dog. When you see an Asian face on television or in the cinema, they’re often relegated to clichéd, stereotypical roles, and I wanted the film to act as a platform to destroy those clichés.”

While France has had a diverse racial makeup for years now, very rarely has the spotlight been given to the minorities to tell their story of growing up in France, with Made In China one of the few to do so. “Made In China showcases a protagonist who is French-Asian, and someone who practically rejects his origins for 10 years,” says Chau. “But in the film, he realises that you can’t completely cut yourself off from your culture, and at some point, has to reconnect and make peace with his own identity and mend his relationship with his father, especially since he’s on the verge of becoming a father himself.” Frédéric himself is a first generation French-Asian person, with parents who came to France as refugees of the Khmer Rouge. Much like François in the film, Frédéric’s choice to become an actor was certainly met with some resistance from his parents, who were worried that he would not find success in this field. “My parents put so much effort into making sure I did well in school, in the hopes that I’d become a doctor, lawyer or engineer and have a stable career so they wouldn’t have to worry about me,” he says. “Then I quit my studies to become a flight attendant for AirFrance, and my parents were disappointed.”

“But what’s different is that they then asked if I thought I would be really happy doing that, and I said yes,” he adds. “At the end of the day, they just wanted me to be happy, and even thought they had their doubts once again when I told them I wanted to be a comedian, saying things like ‘name me one successful Asian comedian’, they relented because I told them it makes me happy. The same applies to my own children, and I’d want them to seek out their happiness.” 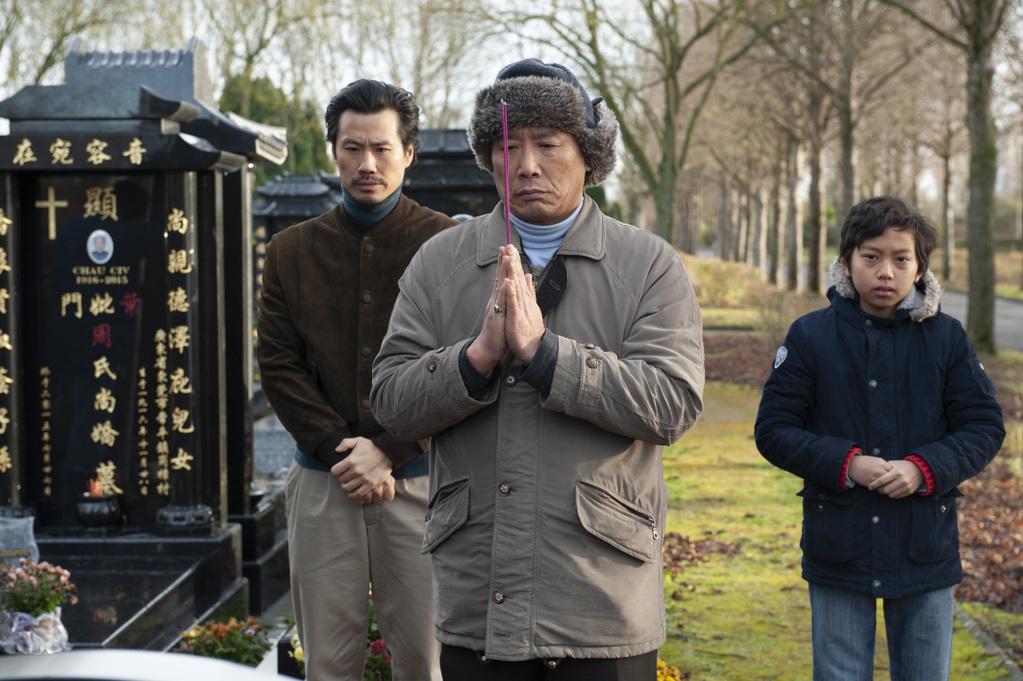 On the filming process, Frédéric expresses joy at having the almost fully Asian cast, saying: “It made things a lot easier because there was so much I didn’t have to explain to them, like automatically taking off their shoes at the temple. For my next project, I’m actually planning to have a 100% Asian cast, with more details to be revealed later.”

On the most difficult scene to film, Frédéric cites the cemetery scene where the family pays respects to François’ late mother. “We were shooting in winter, so already, it was very cold,” he explains. “But specifically at the cemetery, it was a really emotional scene for me, because my own grandmother was close to the place, and while that helped me find the emotions to portray then, it was also very difficult.”

“I do hope that we see a change in the scene eventually,” Frédéric concludes. “Much like how Crazy Rich Asians helped Asian actors in Hollywood, I hope Made In China starts to do the same for France. Asian cinema is definitely gaining more visibility in France and Europe, and I think it can only get better from there. We’re still a very young community, with the biggest wave of migration happening back in the 1970s, with only 2 generations of French-Asians present. It’ll take some time, but I believed that in a few more years, it’ll be normal to see Asians more often on television and in the cinema, and going beyond their clichéd roles to rise above the stereotype and find success.”

Made in China plays on 10th and 17th November 2019 as part of the French Film Festival 2019, also part of Voilah! 2019. To book tickets, visit the website here It receives a wide release in Singapore cinemas on 21st November 2019.

Voilah! 2019 runs from 3rd October to 17th November 2019 around Singapore. For more information on the festival and the full programme, visit their website here.