Presented by new theatre collective Rupa co.lab in their theatrical debut, Rumah Dayak follows a night-hour safehouse for troubled youths in the Malay community. Ironically however, the safehouse itself is facing imminent danger, as they face mounting pressures from the authorities, rising costs of operations, and most of all, their own inner demons threatening to destroy themselves from within.

Both directed and written by Rupa co.lab co-founder Nessa Anwar, Rumah Dayak was developed over a period of six years, and the amount of effort put into scripting it shows a newfound maturity and groundedness to her writing. With a flair for naturalistic dialogue and hard-hitting social realism, Nessa’s writing is a force to be reckoned with in her sophomore full-length script, with a collection of layered characters, each endearing and problematic in their own right – quintessentially, realistically human in their flaws and merits. 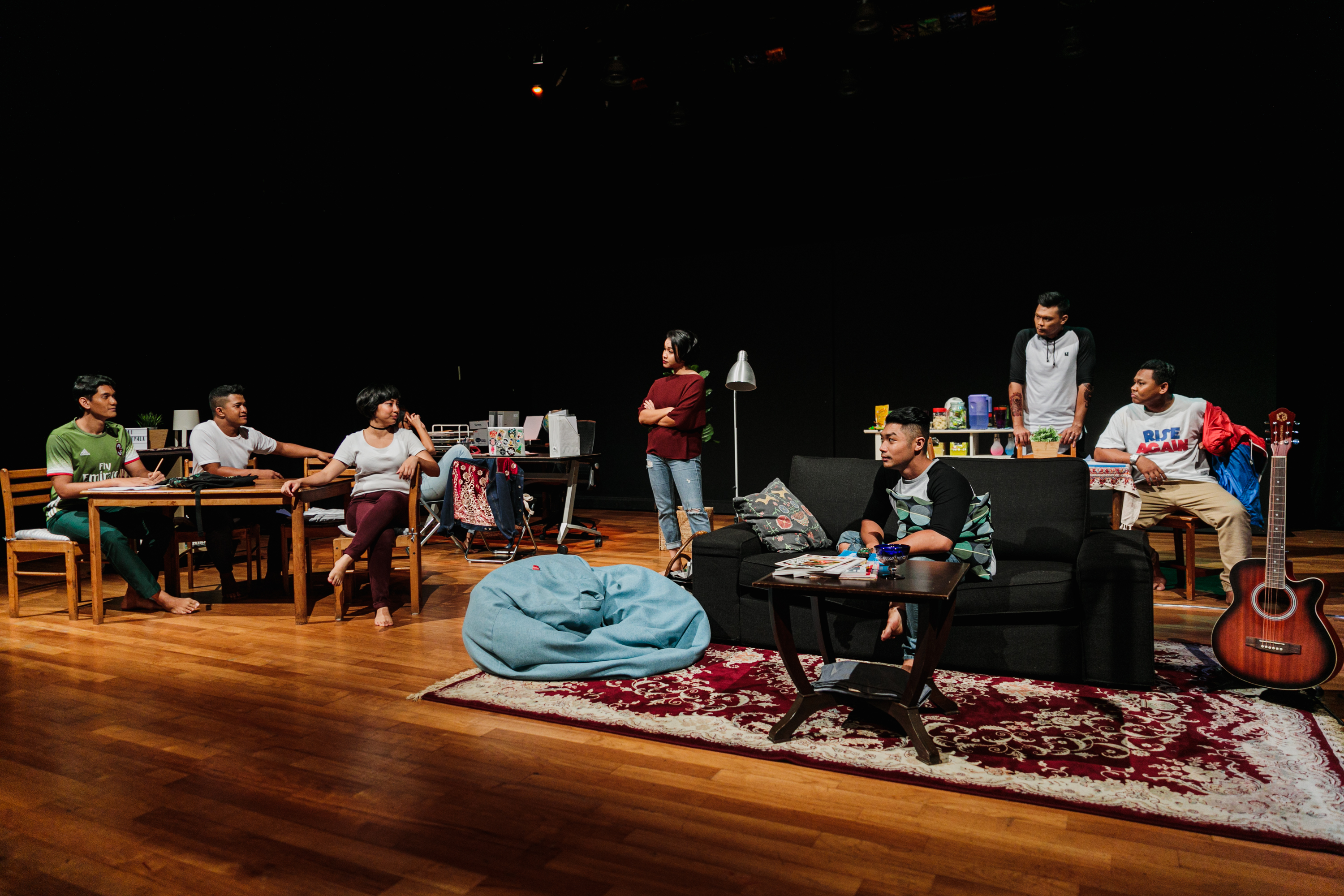 Rumah Dayak’s primary appeal lies in its idea of found family, that a group of misfits and problem children can find solace and kinship in one another, regardless of their broken backgrounds, free of judgment. Run by ‘Abang’ Nahar (Al-Matin Yatim) and ‘Kak’ Julia (Farah Lola), the safehouse’s residents are varied, and well-differentiated and characterised to be unique. The longtime residents of the house are Shah (Uddyn J), a happy-go-lucky ex-drug offender on a bright path ahead as he pursues his diploma; Dash (Yamin Yusof), struggling with his own insecurities and harbouring dreams of becoming a chef; and Ella (Rusydina Afiqah), a problematic, hot-tempered girl under curfew. 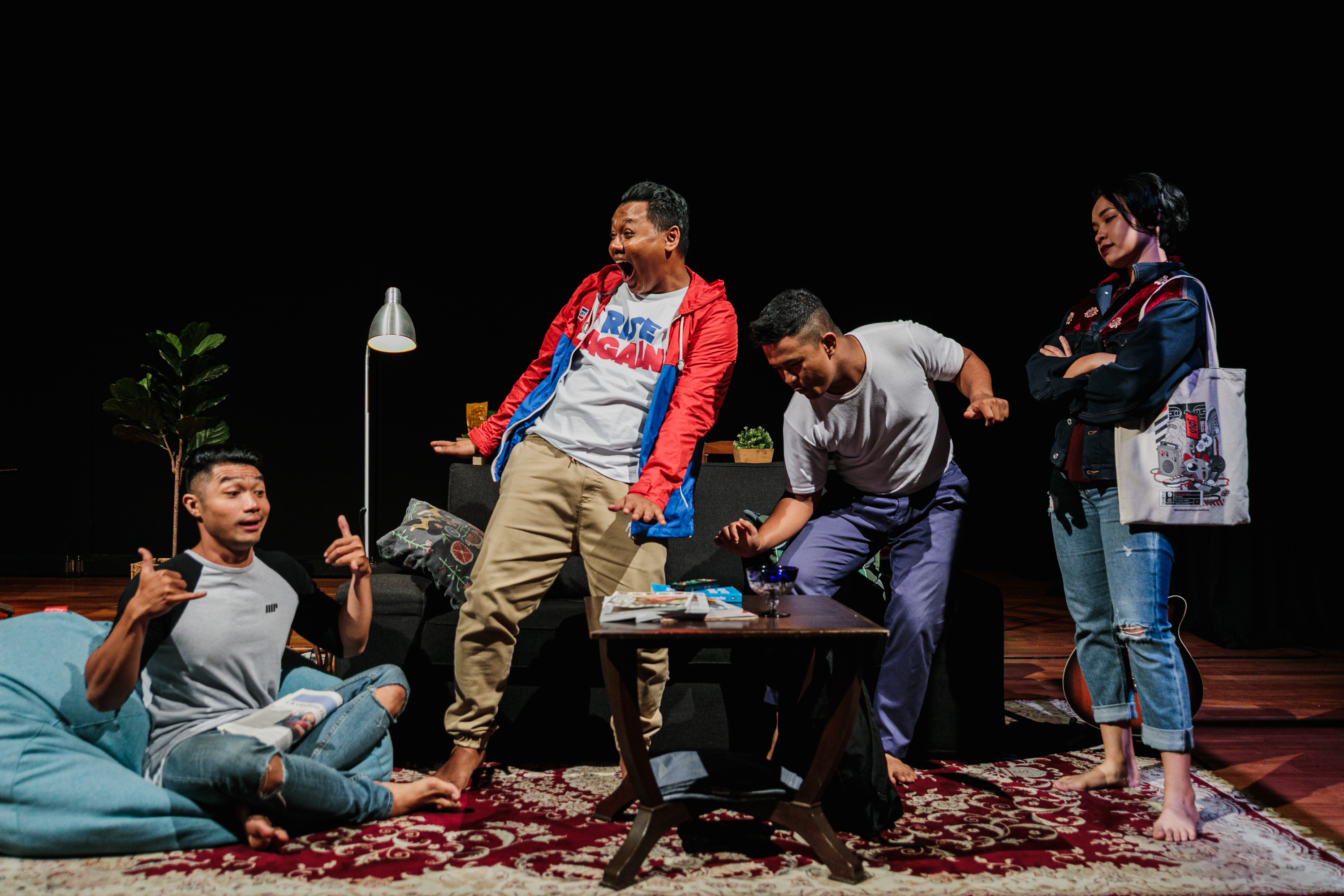 These residents are contrasted with the younger residents, who are still schooling – formerly pregnant Amira (Tysha Khan); school soccer star Boy (Wan Ahmad), and Slim (Ali Mazrin), who struggles academically and comes from a deeply broken family. This sense of the familial is captured right from the beginning of the performance, as all eight characters show off their personalities when they deal with an influx of cockroaches thanks to having left food out overnight. Despite this sequence being surtitle-less, all one needs to see to understand exactly what is going on are the expressions and reactions on each actor’s face, a bond they share that endears us quickly to them and appreciate this motley crew that has become a family to come home to each night. With Fared Jainal’s cosy set that realistically depicts the safehouse, we further buy into the authenticity of these stories and relationships, and feel an intimacy and closeness to these characters. 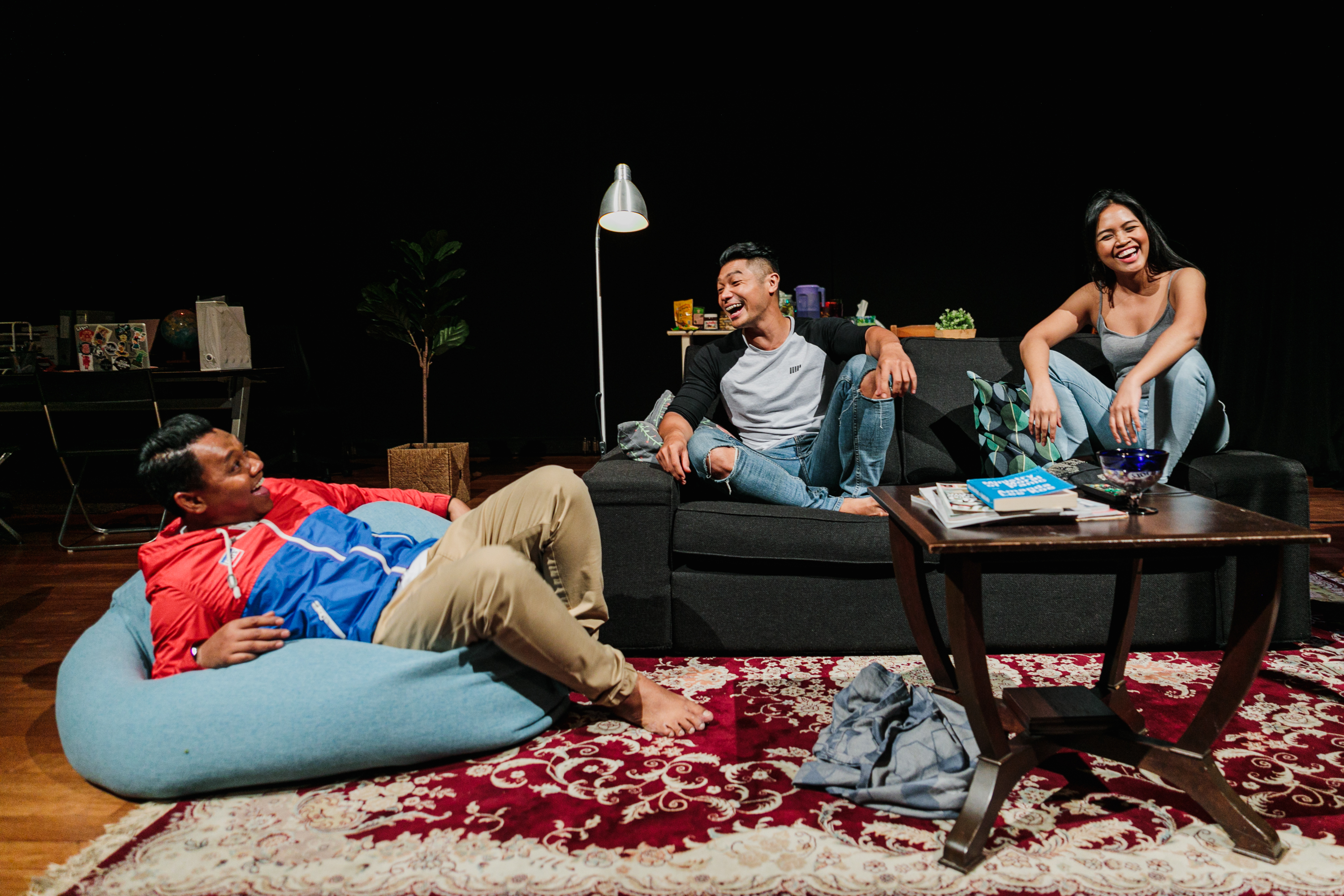 One of the boldest aspects of Rumah Dayak is that much of it relies almost completely on its presentation of snapshots of each character within the safehouse, leaving the next scene always open to surprise and almost completely unpredictable as to what might happen next. Thanks to Nessa’s firm grasp on each character and the confidence with which she depicts them, we are left hooked on each character’s story, wanting to know each of them better as people, never pitying, but understanding who they are and why they’ve come to be in this position, and what lies ahead for them. 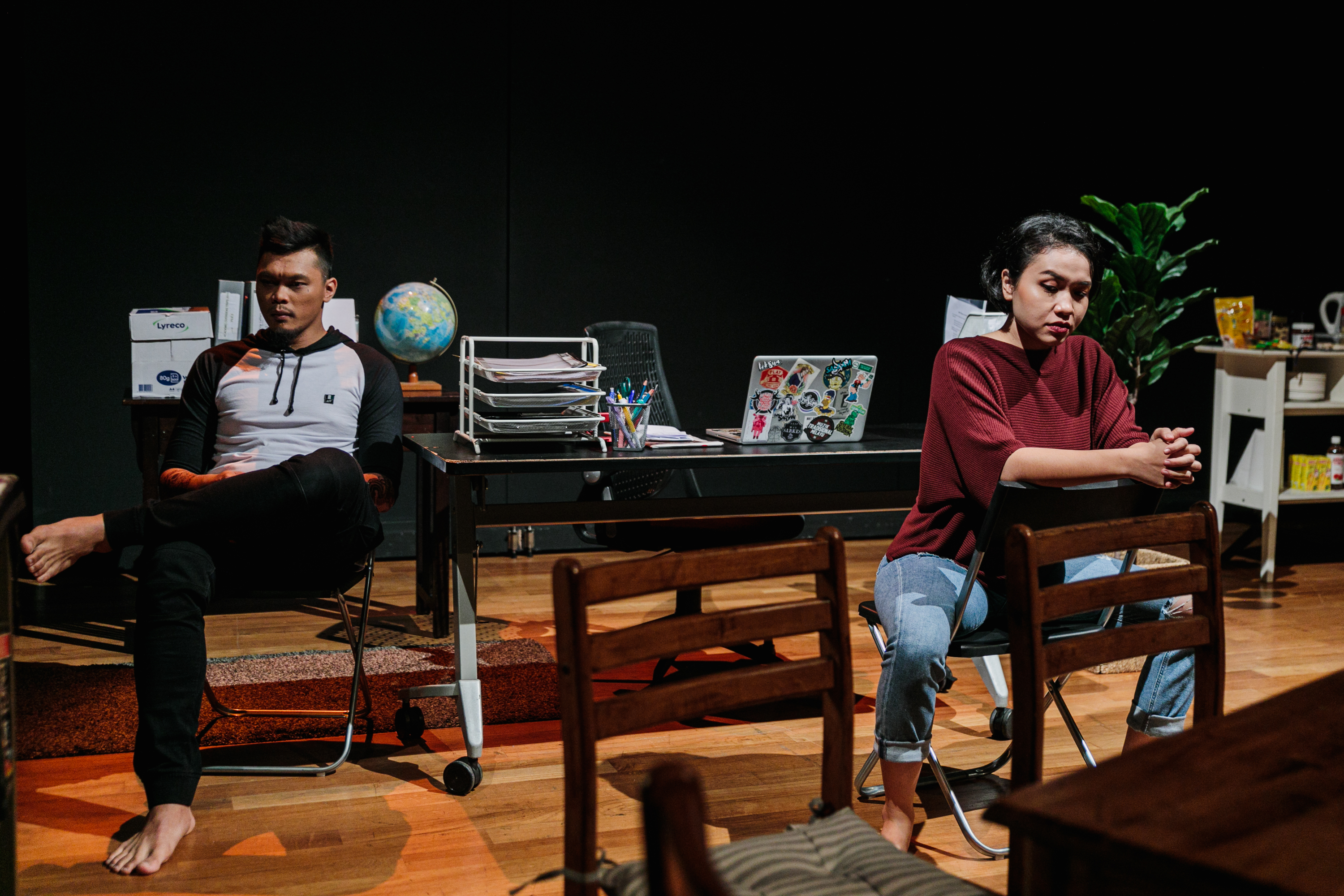 The cast is stellar at embodying each of their characters, with particular praise going out to Al-Matin Yatim and Farah Lola as the ‘big brother and sister’ of the safehouse. Simultaneously juggling the running of the safehouse with the financial and personal strains it’s put on their relationship, the dramatic tension between the two is pulled taut over the course of the play, and stretched to its limit, the eventual outburst from both of them an inevitable outcome as a result. From both their performances, it was evident that their characters bore the burden of their own troubled histories, yet brought out their respective love and care for each of their wards in the safehouse. 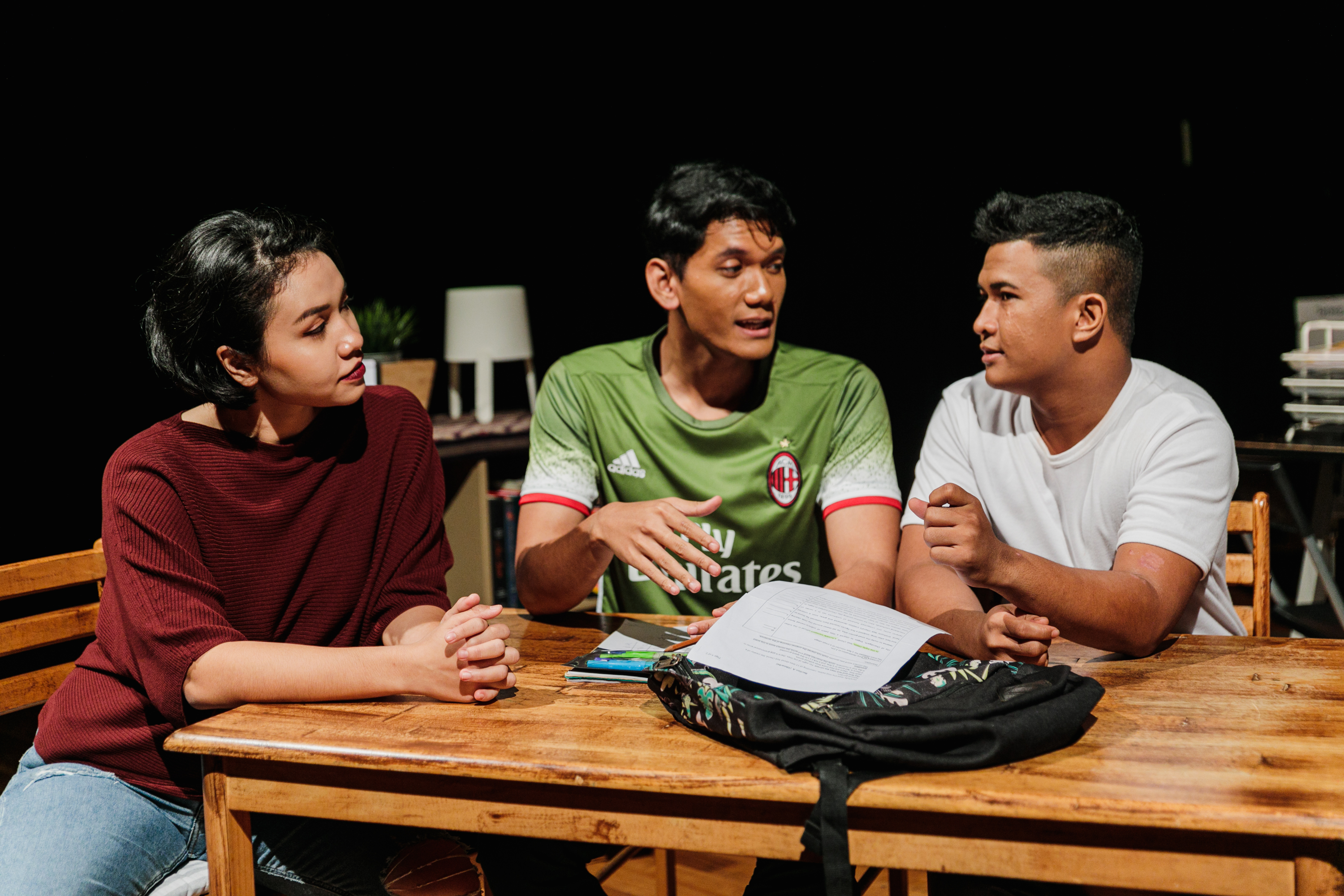 So much of Rumah Dayak is dependent on the performances of each cast member, and as a director, Nessa has done well in getting her cast to bring out their characters’ issues, tenderness and relatability. In a home tutoring session led by Julia, Slim struggles to formulate points for an English essay, and there is both heart and humour in listening to him come up with outrageous answers, but seeing his genuine desire to learn. We see Dash’s subtle jealousy come to light as he watches his peers receive help and flourish one by one, but left in the doldrums as he’s fired from one dead end job to another, with only Julia left to comfort him and encourage him to keep believing. School team striker Boy chooses to study hard instead of relying on soccer as his end goal, while even the problematic Ella, picking fights with almost every single safehouse resident, receives her own moment of redemption as she ultimately proves herself to be a believer in justice and doing the right thing. 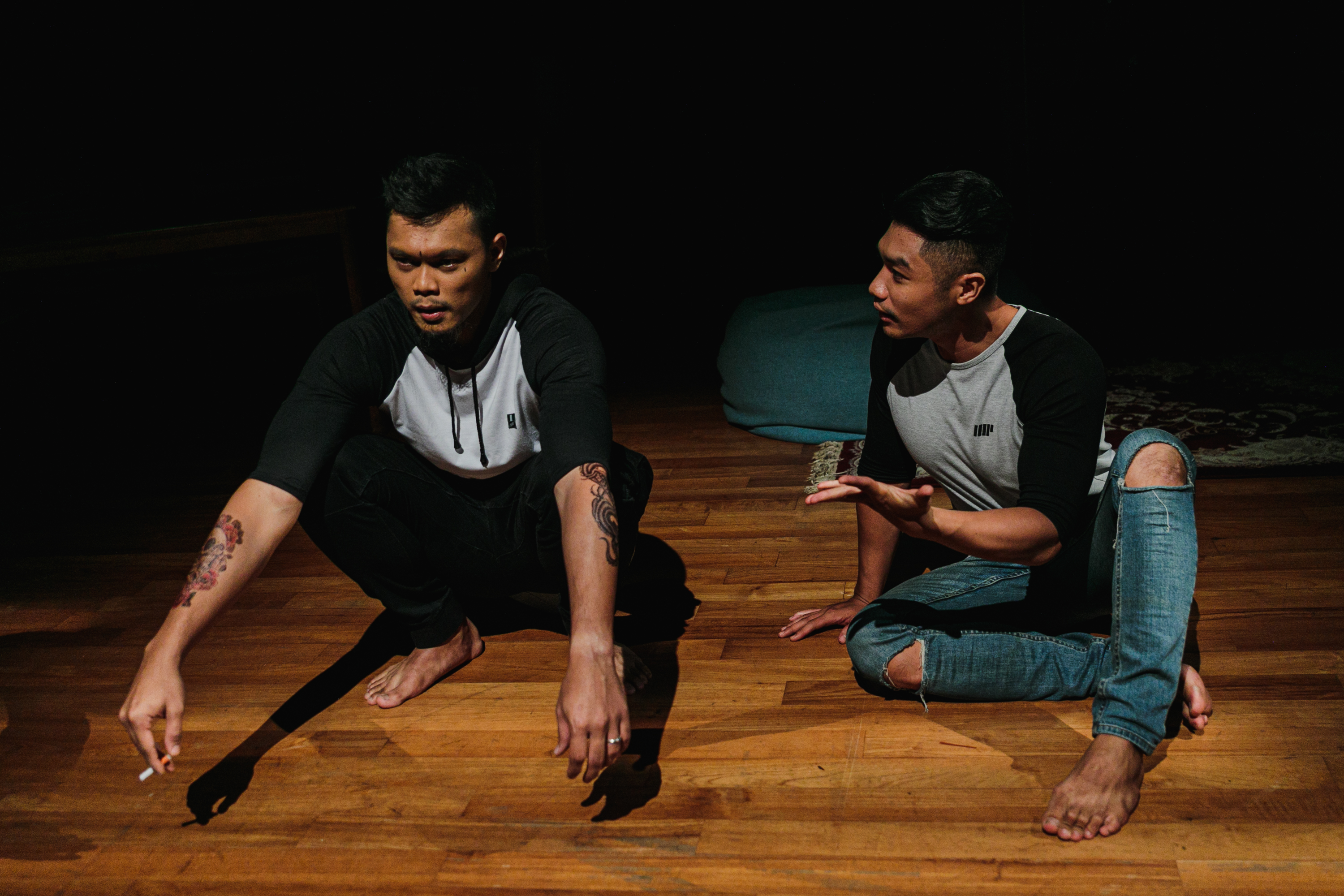 Despite their little slice of paradise contained within the safehouse, we cannot help but feel the constant threat of external forces looming outside, ready to crush the entire set-up the moment a single slipup happens. Whether it’s the prospect of jail or the sinking feeling that their lives will never amount to anything, there is a deep sadness that underpins the entire play. When one of the safehouse’s residents ends up making a fatal mistake that indirectly leads to its closure, we feel Nahar and Julia’s disappointments bubble over and burn out, and the amount of hope we place in each of these characters to succeed and dig their way out of their circumstances erased just like that.

Yet, we understand that these youths are not entirely at fault, rather, a large part of the blame ultimately goes to society and the lack of support afforded to the underprivileged, leaving our ensemble so ingrained with the mindset that they are the ‘scum of society’. The aim of the safehouse then, isn’t so much to provide financial assistance, so much as to give these troubled youth the platform for building their own confidence and helping them believe in their own future, and that despite all the screw-ups they’ve had in life, remain equally worthy of a second chance as anyone else in the world. Rumah Dayak is a stunning, heart-wrenching debut from Rupa co.lab that confirms Nessa’s talent in staging social realism, and an urgent production that reminds us of the value of all lives, regardless of background or history.

Rumah Dayak ran from 21st to 24th November 2019 at the Malay Heritage Centre.