In London’s (Off) West End 2019: Midnight Movie at the Royal Court Theatre (Review)

★★★☆☆ (Performance attended 3/12/19)
Learning to find a genuine connection in the digital age with new ways of communication, and the idea of the body on the Internet.

LONDON – The beauty of experimental productions lies in how they often bring together completely unexpected methods, ideas and narratives to craft singularly unique experiences in each work. With the Royal Court’s Midnight Movie, a new work by Eve Leigh and directed by Rachel Bagshaw, the production brings together spoken English, BSL, captioning and audio description, along with live drumming to craft and enhance this tale of our online selves in the increasingly digital world. 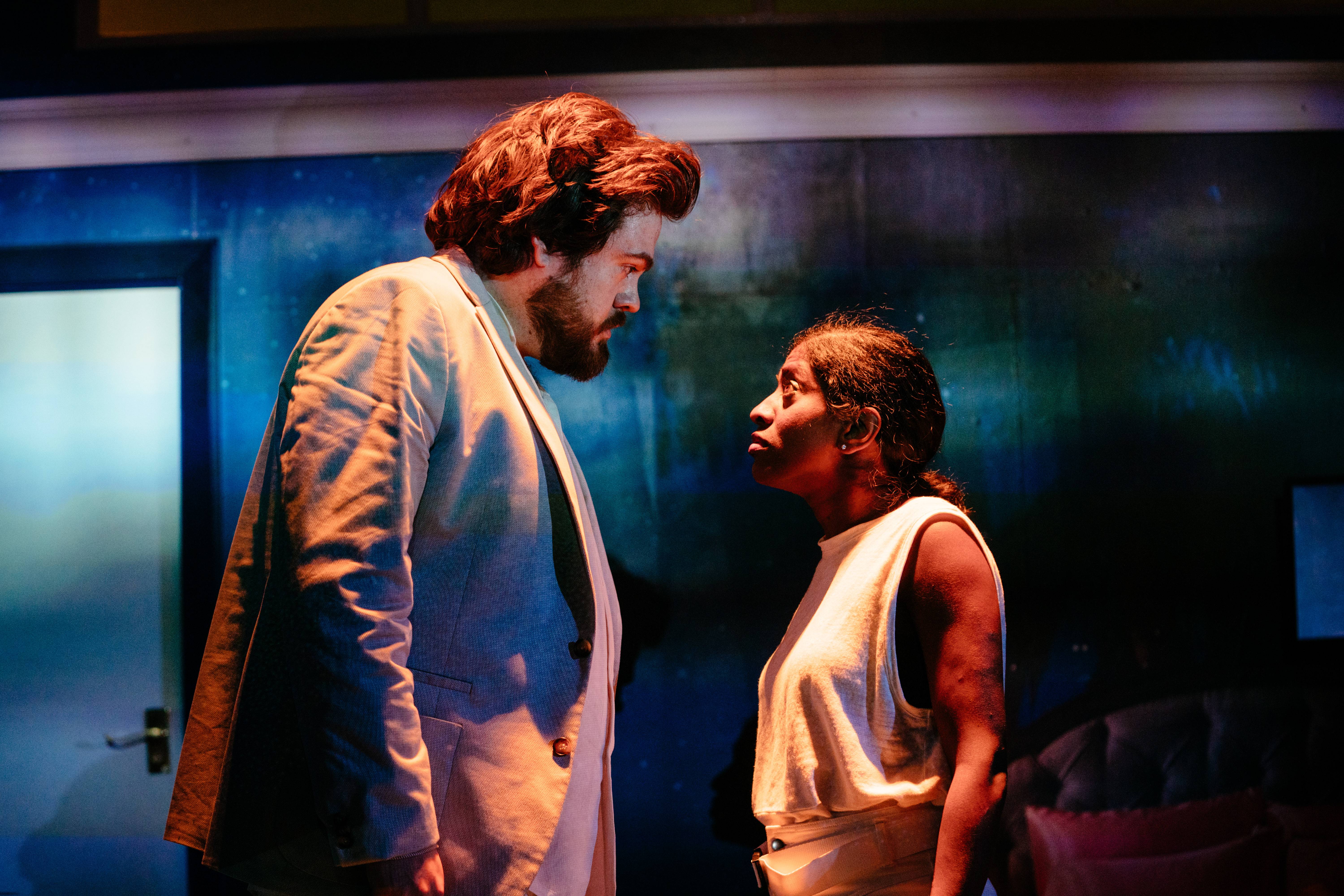 Starring Nadia Nadarajah and Tom Penn, like its title implies, the moment we step into the Jerwood Theatre Upstairs, we feel cosy and warm, with music playing as if we were at a cinema waiting for the movie to begin. Closed captions on a projector screen prepare us for the show with a number of instructions, and the show begins. We are introduced to our actors, who describe their roles as ‘Avatar 1’ and ‘Avatar 2’. Both Nadia and Tom stand on a large turntable/wheel-like structure, revolving and being shown off, as if they were being marketed, as a metronome ticks in the background keeping time. 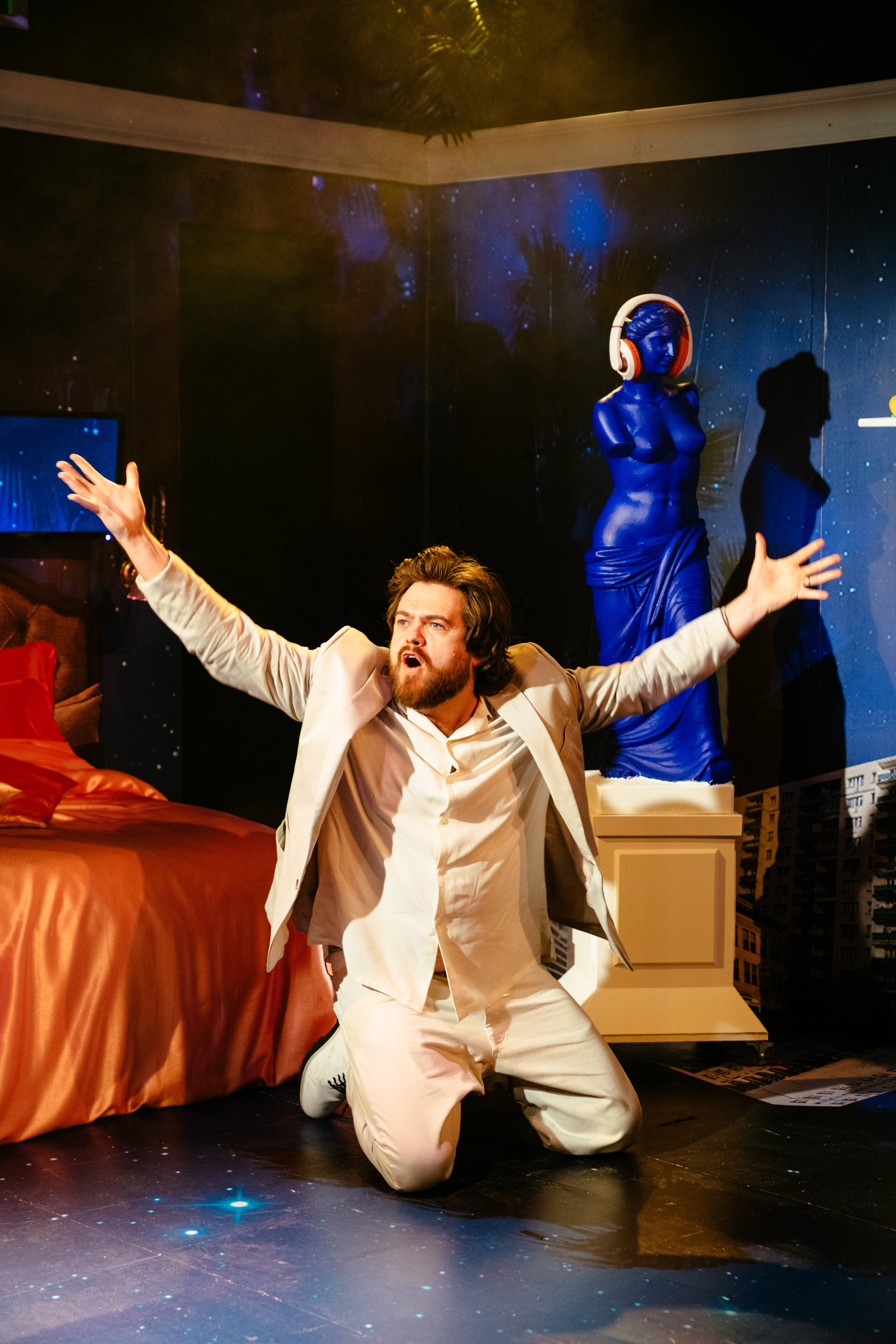 Midnight Movie imagines both ‘avatars’ as figures lost in the glorious, terrifying black hole of the internet, and all that it encompasses, as two people falling down a chain of videos online one night (something most of us have been prone to doing ourselves). Tom heads to the corner of the stage and begins drumming, building up anticipation while Nadia finds herself in an elevator, seemingly trapped before everything goes quiet, with Tom walking over to silence the metronome. Swishing some water in a tank to create the sound of a rushing river, the actors then enter a discussion of Instagram, and of capturing the moment and being in the moment. 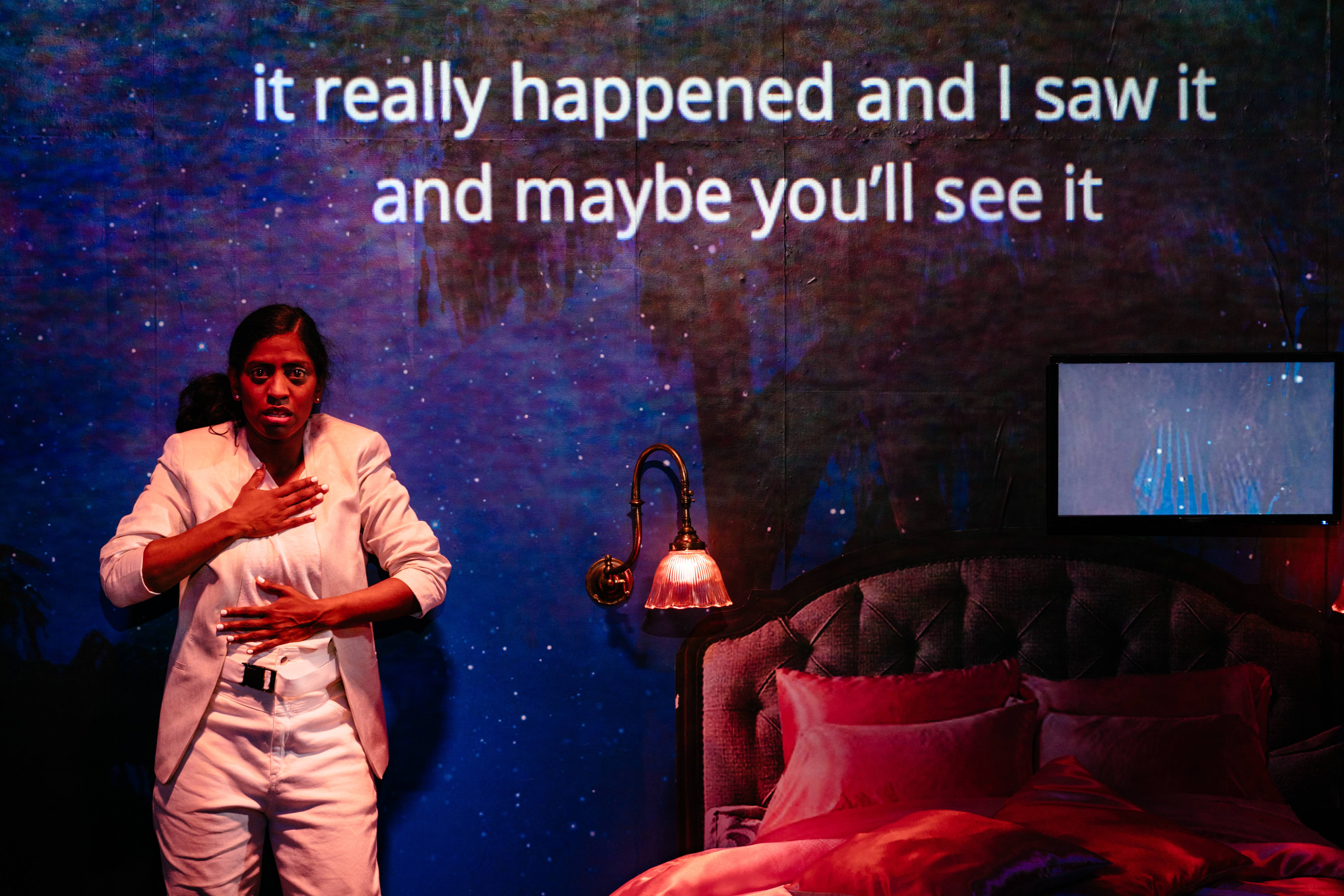 Social media offers the simultaneous possibility of connection and disconnection – Tom goes to the back of the ‘house’ and begins speaking to Nadia. Standing behind a panel, while we can see him, it seemed as if they were in different parts of the world despite being in the same room, as if referencing how we communicate almost exclusively via social media even while within the same physical space. Emphasis is placed on how our identities are kept hidden online, yet it’s easy to track down a real person simply by tracing their IP address. 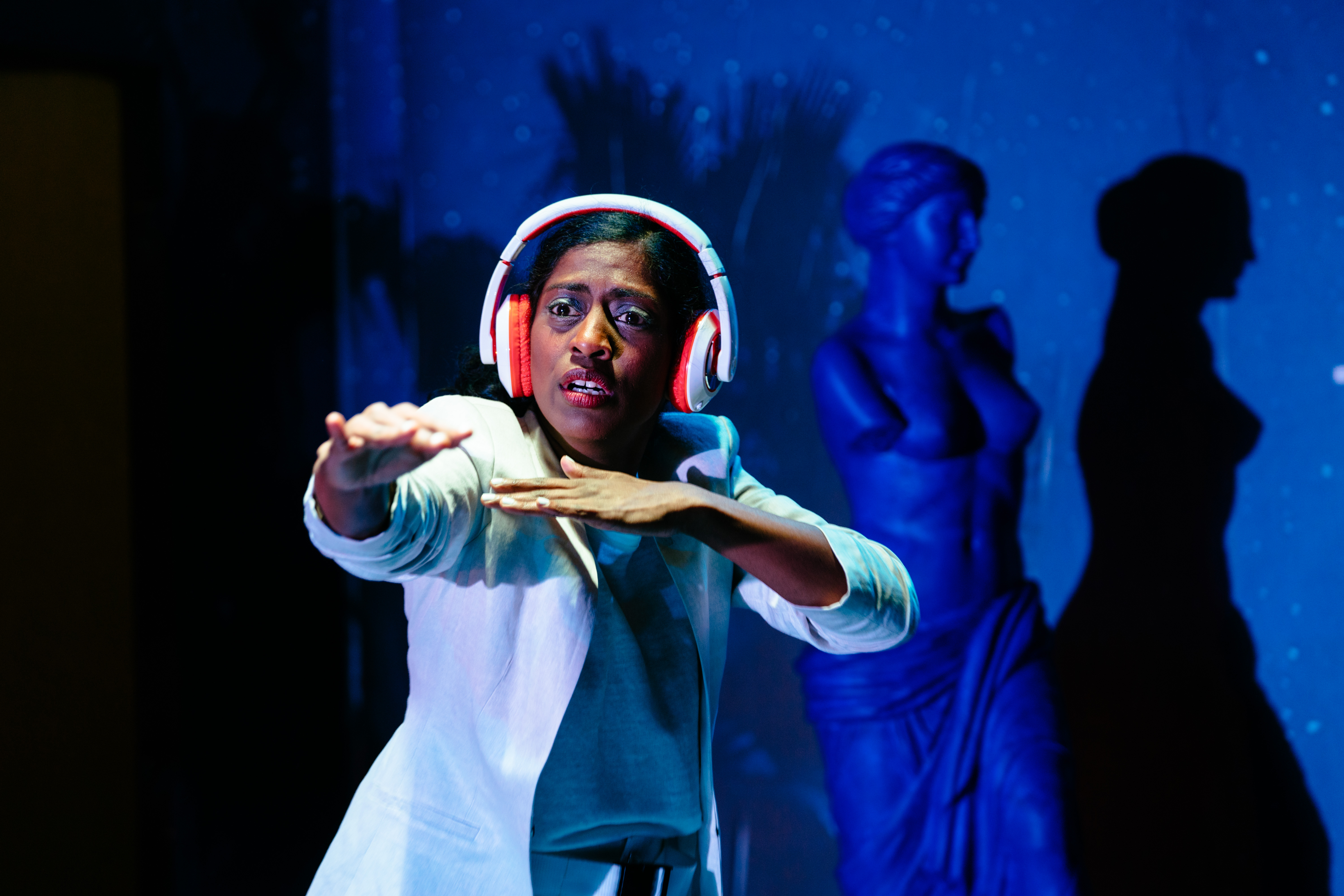 Throughout, Nadia performs in BSL (British Sign Language), and through her signing, the message of the play seems to come through more urgently, a fascinating exploration of how tone can be conveyed even when we’re not speaking, and how body language becomes so key to expressing one’s self as a BSL-signer. There is an artistry to her movement that at times feels more akin to choreography than speaking, beautiful to watch while delivering meaning. 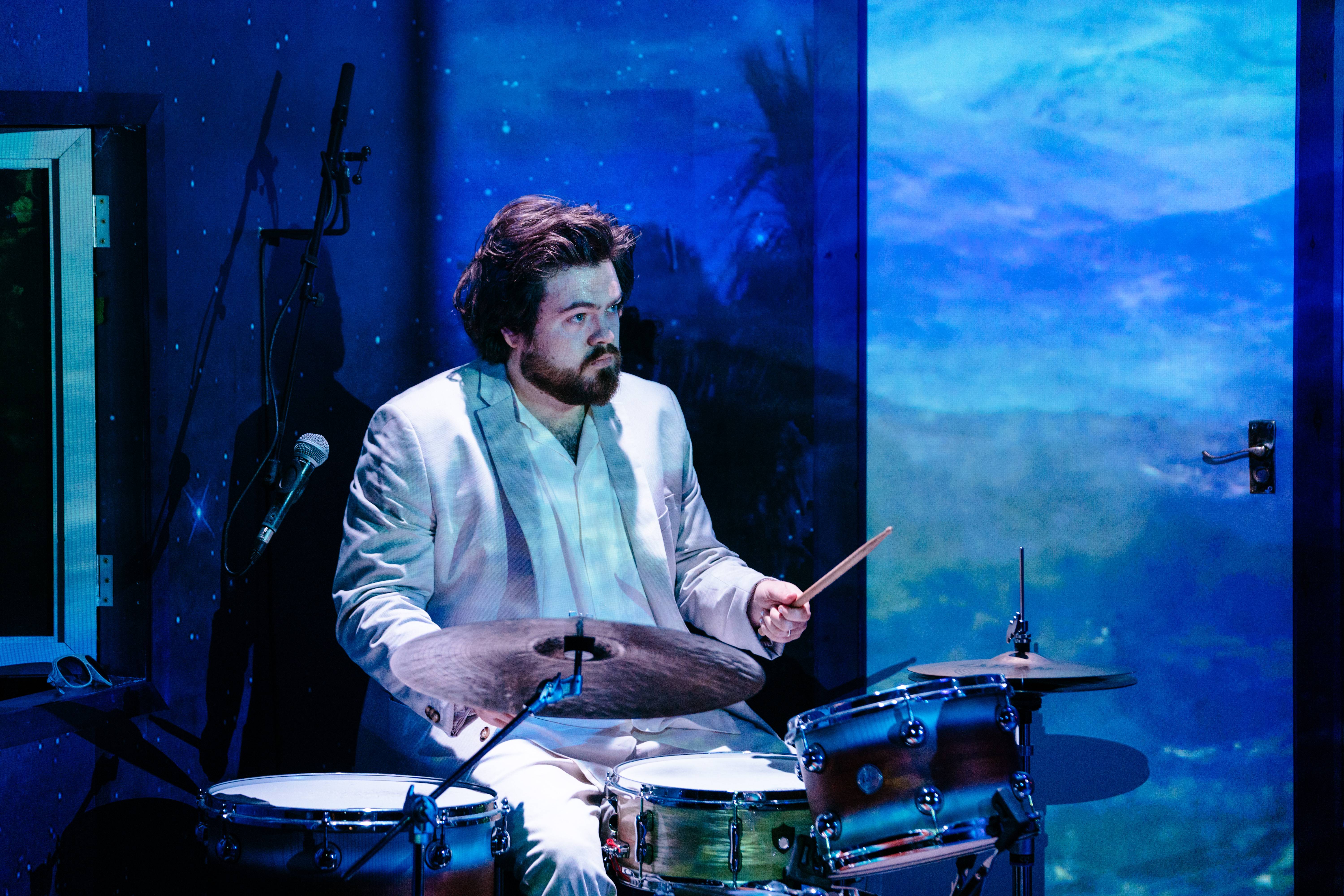 Tom returns to the drums, crashing down on them like the roaring of waves (complete with visuals on the projector), before Tom and Nadia begin telling ghost stories to each other, torchlights in hand. These stories revolve around each person’s digital histories haunting them, and the eternal nature of internet activities. And at this point, like an episode where we go down the rabbit hole of YouTube videos, we’re suddenly interrupted by an ‘advert’, forced to listen and watch something intrusive, obstructive, and terrifying how they know exactly what ad to show you based on what you’ve recently been browsing or searching. 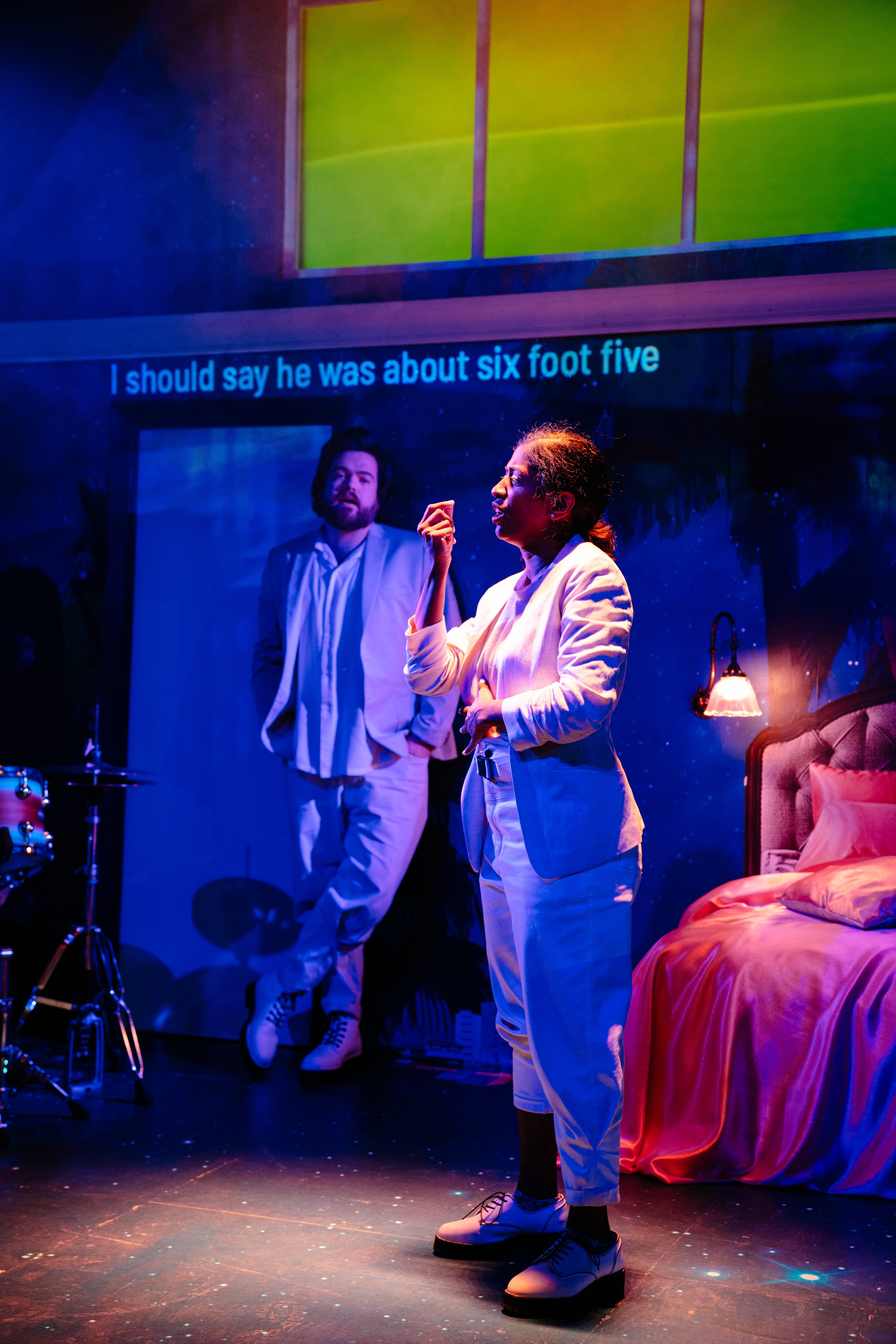 These fears erupt into further issues one faces when navigating the perils of the internet, with both avatars going into an ‘alternative reality’, and showing us the different ways we can get sabotaged online or in real life. Segueing into a discussion of reality television, they think about stories and the various mediums these are told in, as we see footage of old reality shows on the television behind them.

It’s summer now, the period ripe for midnight movies, the quirky, the weird, the pornographic, the subversive. Tom sings a German opera, with no surtitles, yet we understand perfectly what it is he is expressing with his emotion. Tom goes on to play the drums again, now staring at Nadia. It’s clear then, that while Nadia has BSL, Tom has been attempting to communicate with her via the drums. Nadia comes to play them and take over him, and it seems as if they have now found a common language. 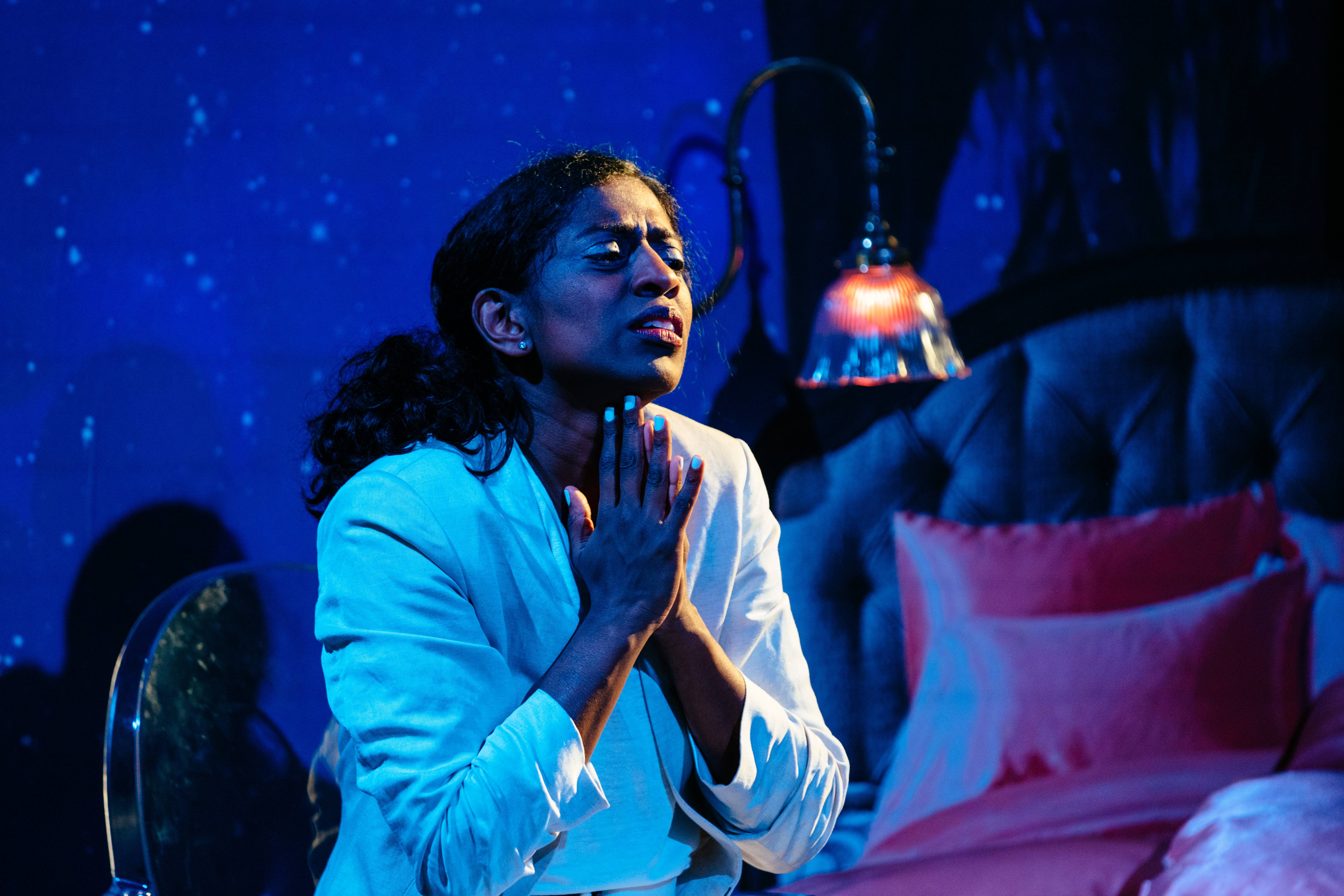 Tom returns to the tank of water and soils it, murky and dirty, and we think of how what we do always leaves a mark on us, eventually making each of us the people we are today. The world of Midnight Movie goes berserk, and both avatars have ‘fun’, going haywire. Everything then comes to a standstill, a pause as the system seems to have overloaded, and we see the all too familiar ‘rainbow wheel of death’, and the entire show ‘lags’ and ‘buffers’. 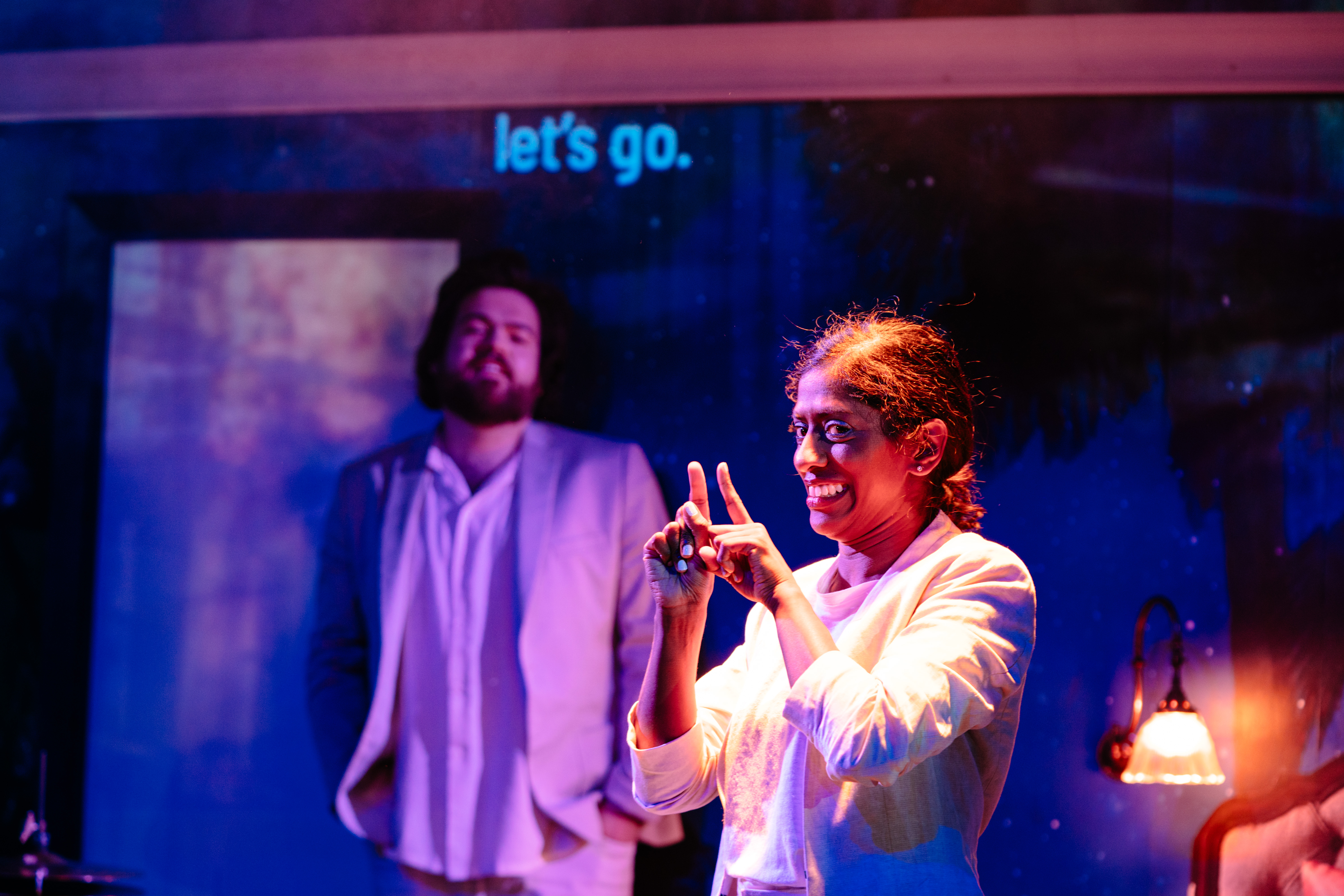 Midnight Movie then, is a show that’s primarily an exploration of what it means and how we can bridge our differences. Our humanity is called into question with how much time we spend on the internet, a construction of a digital body by our own doing. At what point are we more representative of ourselves online or in real life, and what does this spell for the way we represent and communicate ourselves to others? 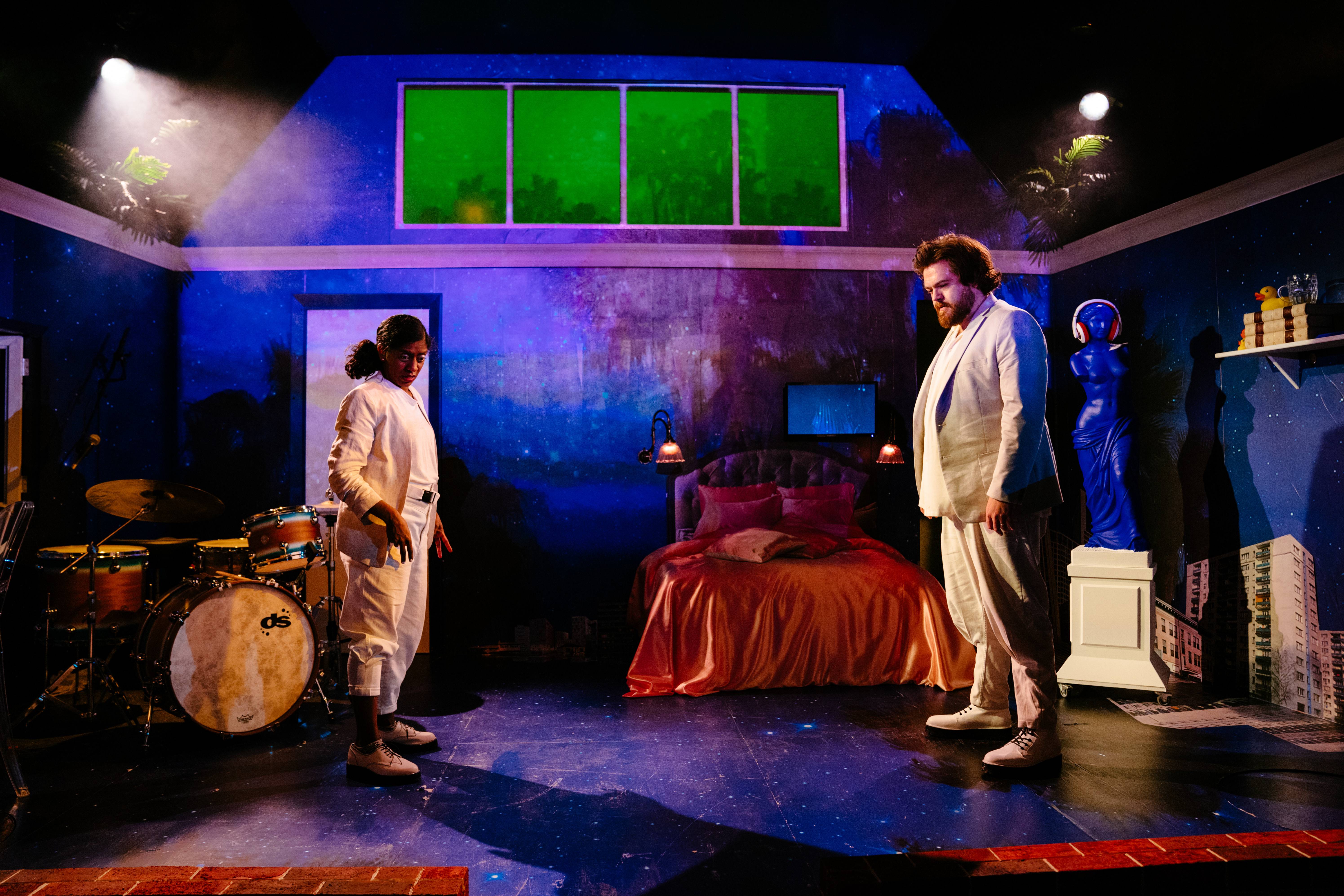 We think about the different ways in which we find ways to connect with each other as both actors explore different mediums of communication, one that brims with more possibilities than ever in a digital age, allowing us to create personas that go beyond our skin colour, beyond our ‘disabilities’, and touch each other as fellow humans exploring a brave new digital world. There is an infinite number of people and personas existing online, following people we sort of know, but only through their avatars and online personas, as intimate strangers who know what people on the other side of the world are having for breakfast. 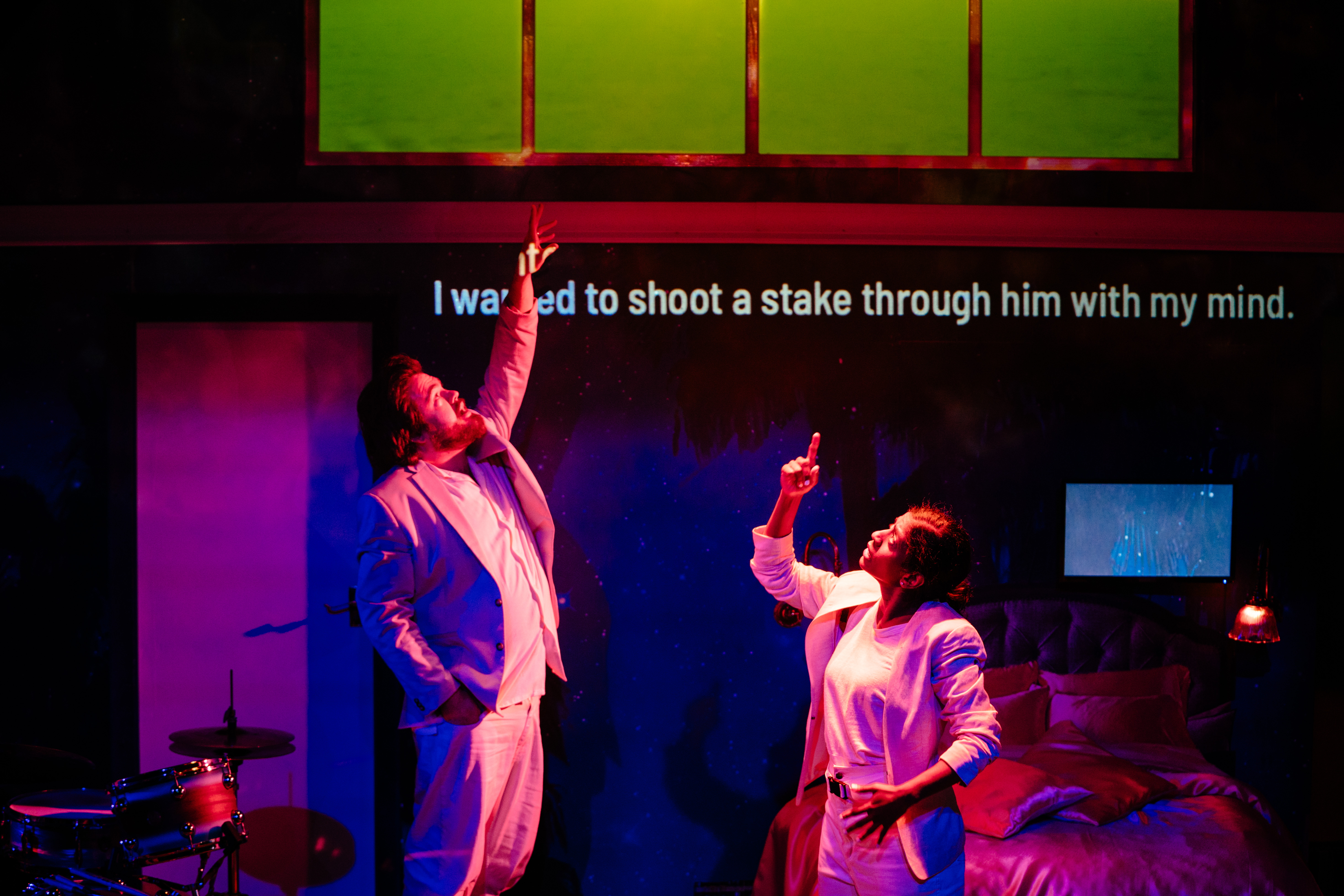 Midnight Movie practically looks at the absurdities the internet has brought to our lives, and how we are less in reality than we are digital, and opens up a whole realm of possibilities with all these new mediums afforded to us. It’s energetic, real, bold, and a no-holds barred exploration of modern digital culture that leaves us wondering about our own physical bodies and the reality we truly live in, long after stepping out of the theatre.

Midnight Movie runs from 27th November to 21st December 2019 at the Royal Court Theatre. Tickets available from their website here