In London’s (Off) West End 2019: Escape From Planet Trash by Sink the Pink (Review)

LONDON – Set in 2050, in a galaxy ‘not too far from our own’, Sink the Pink’s Escape From Planet Trash imagines a world so uninhabitable that it’s become the most dangerous place in the solar system, and also, the dumping ground for the entire universe. Unfortunately, that same planet also happens to be the supposed future of our planet Earth. 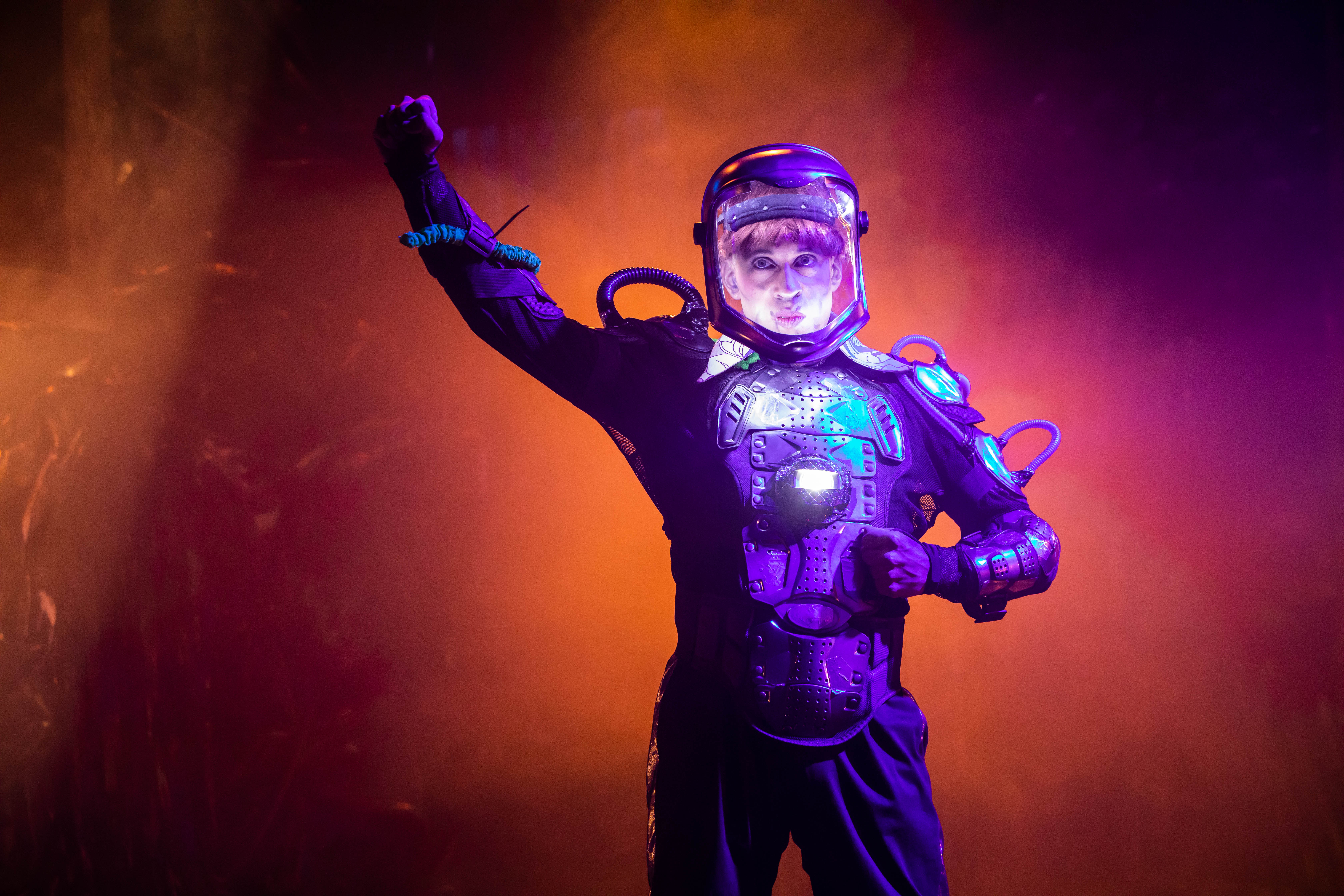 Written, directed by and starring Ginger Johnson, Escape From Planet Trash is a knowing, loving tribute to sci-fi B-movies of the past, repulsively trashy and unabashedly queer, littered throughout with dirty jokes and campy fun. Featuring live music by pianist/music director Sarah Bodalbhai and her multi-string instrumentalist sidekick, Escape From Planet Trash starts us off on a bizarro version of a typical space opera, as we watch space explorers Captain Mairi Houston and Private Parts (aka PeePee, played by Mahatma Khandi) answer to their ominously evil lord and answering an unexpected distress signal sent from Planet Trash. 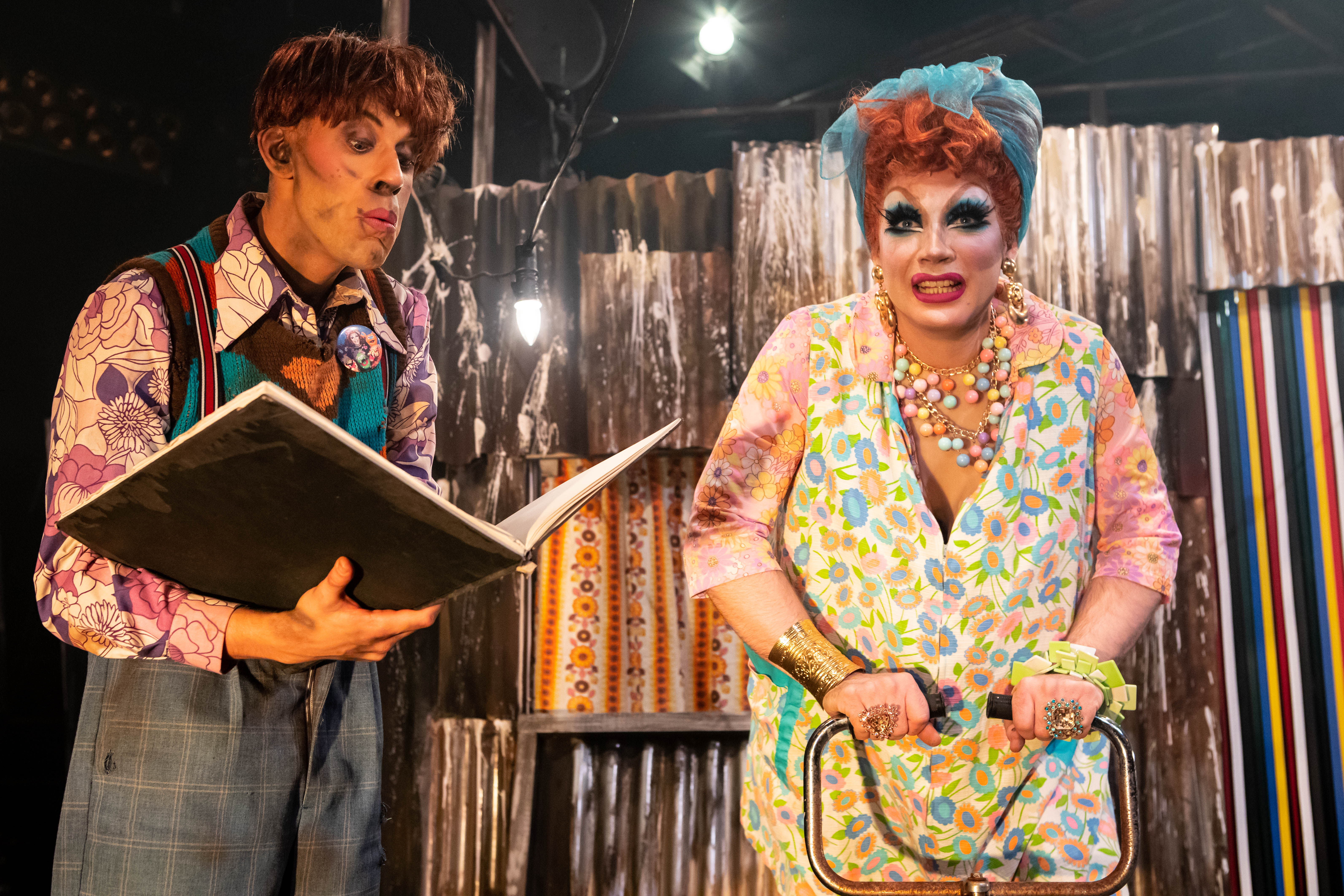 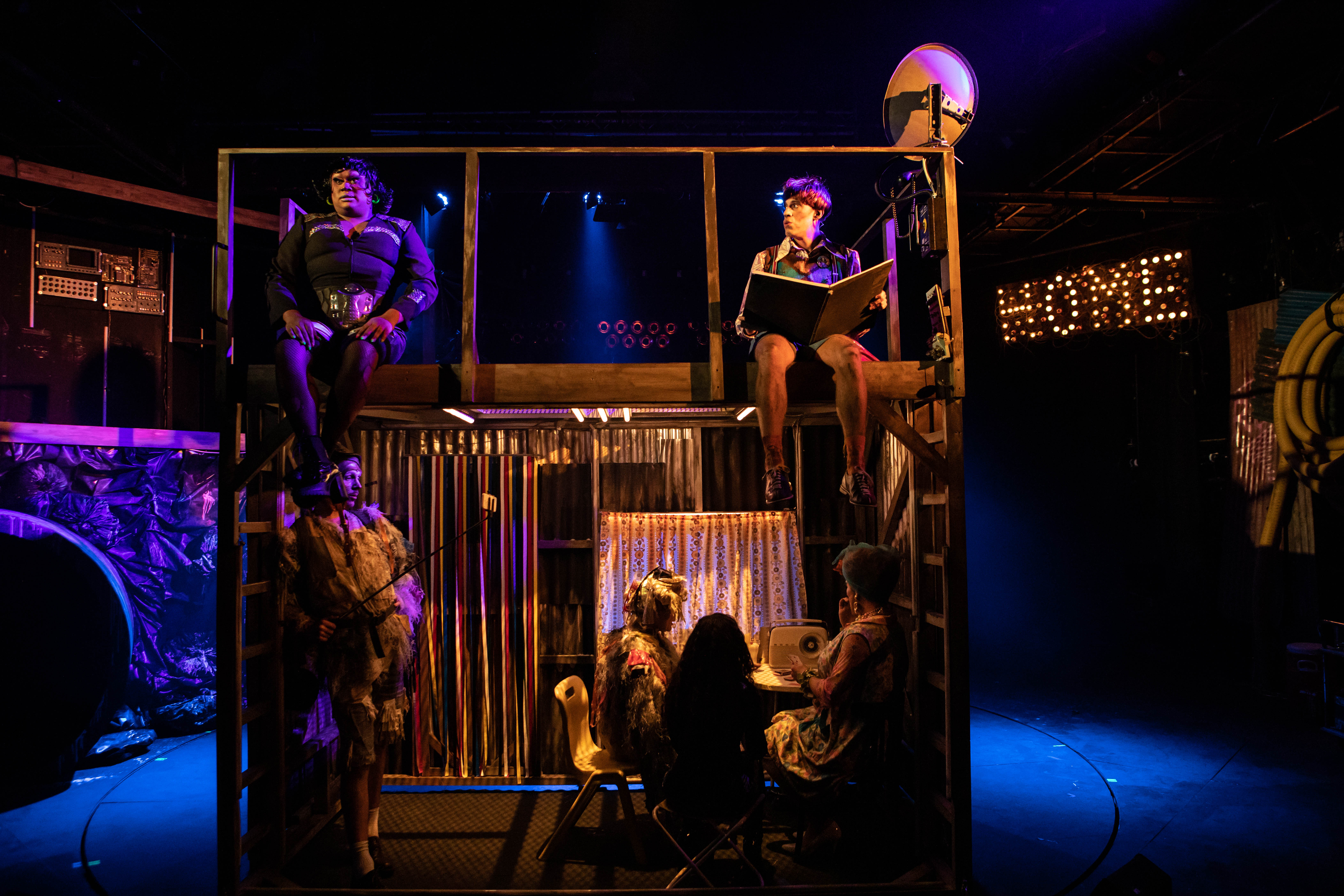 Escape From Planet Trash showcases some smart staging from Johnson, with an epic-sounding ‘Step Into The Night’, an orchestral, operatic piece about Earth accompanied by piano and violin. Johnson fully utilises the revolving stage, where it seems like pilgrims are going around their leader’s podium, while Clancy Flynn’s lighting helps illuminate a giant talking turkey as it grieves over how humans have exploited their kind for centuries, for Christmas feasts and Thanksgiving meals. It’s no wonder the turkeys now seek revenge, in an absurd but completely understandable plot twist that frames the birds as the antagonist. 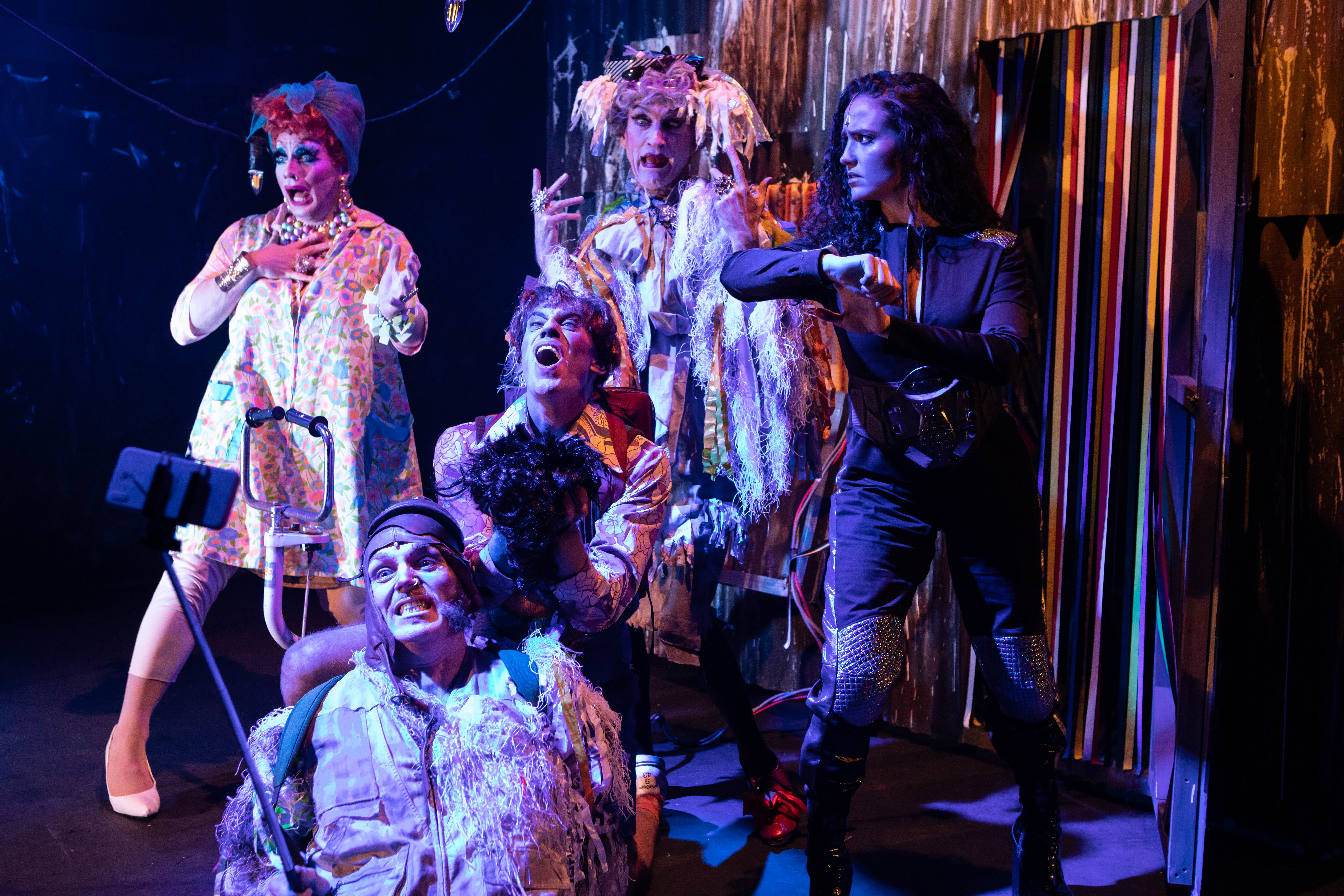 As Ginger and Sonny prepare to hold a party for their new guests, even more of Johnson’s functional and practical set comes to light, with the ‘house’ able to transform in each scene to suit each part of the show. The resulting party then, was one to behold, with PeePee cycling furiously on a bicycle to power it via kinetic energy. The plot twists come hard and fast, and before we know it, PeePee has been snatched by an unknown force, leaving us bewildered as we segue into the intermission. 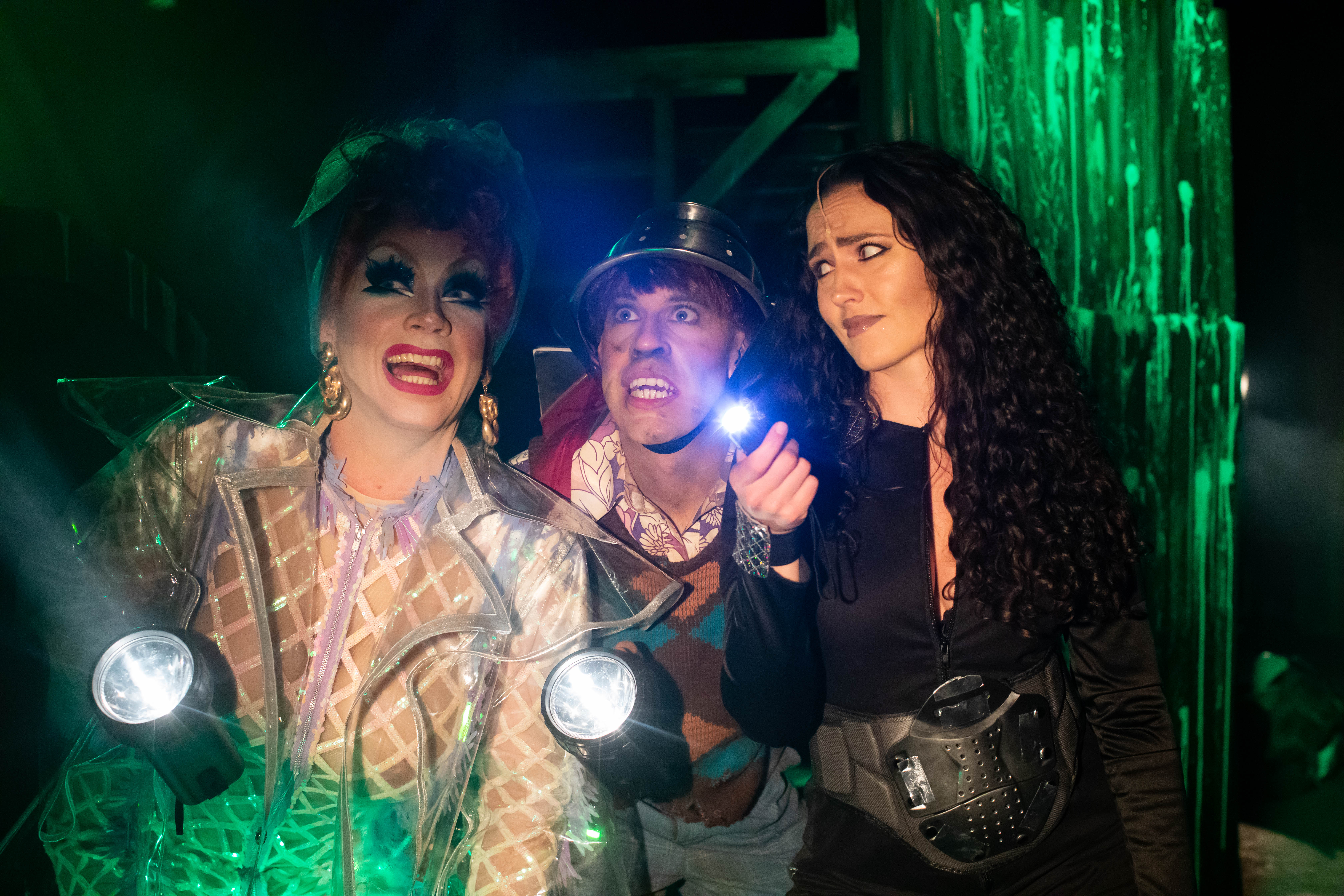 The heat is on as the ragtag crew band together to find PeePee, encountering various phenomena along the way, including a pile of faeces that somehow convinces them to always look on the bright side of life – through song, and a lively, organic mode of audience participation of course. 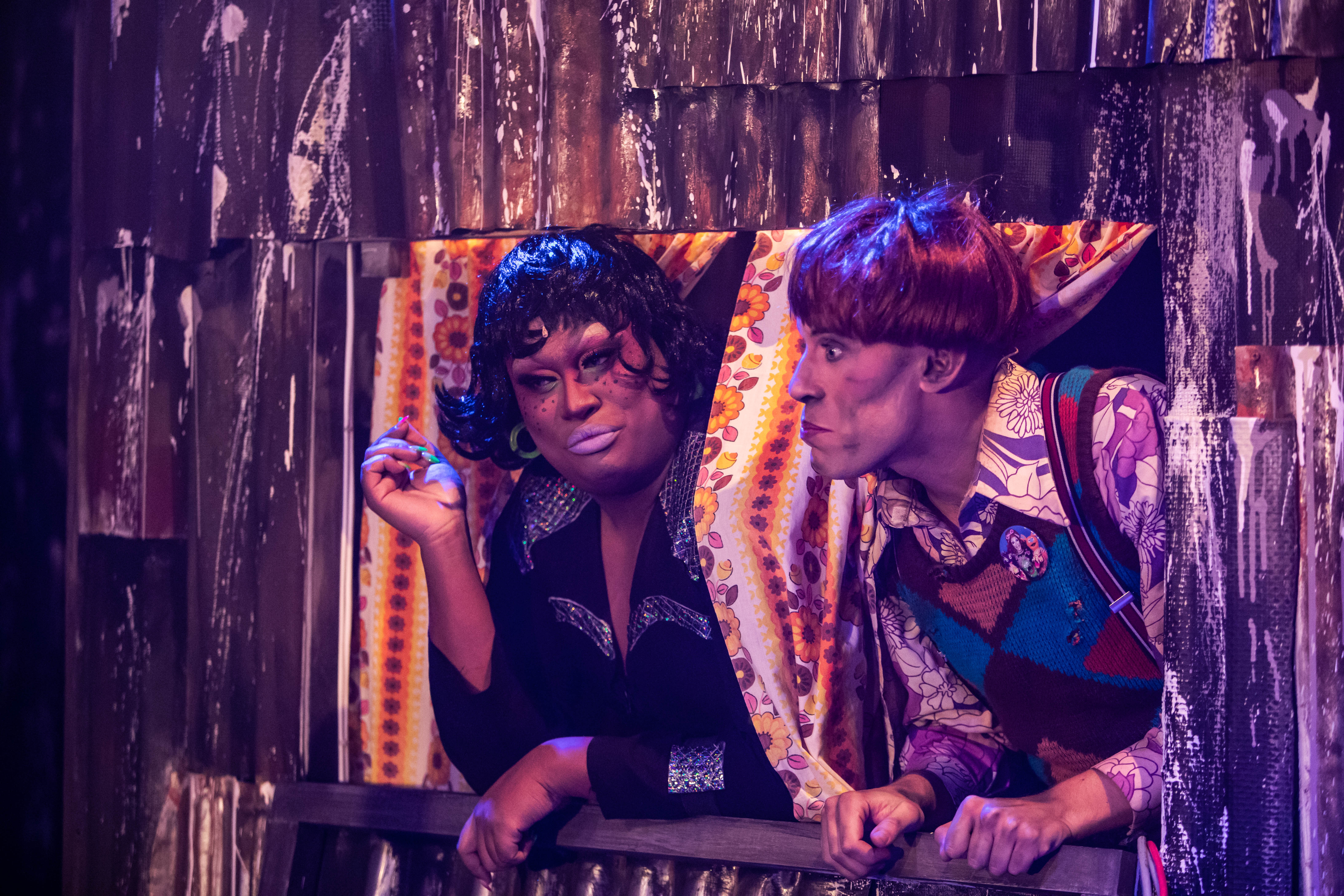 Climbing through magical doorways to traverse the planet, the gang eventually meet the nefarious turkeys, with a bloody fight to the bitter end. With Ginger facing the threat of getting cooked in a human-sized oven, it’s up to the team to save her from this bitterly ironic end of food revolting against its eaters. 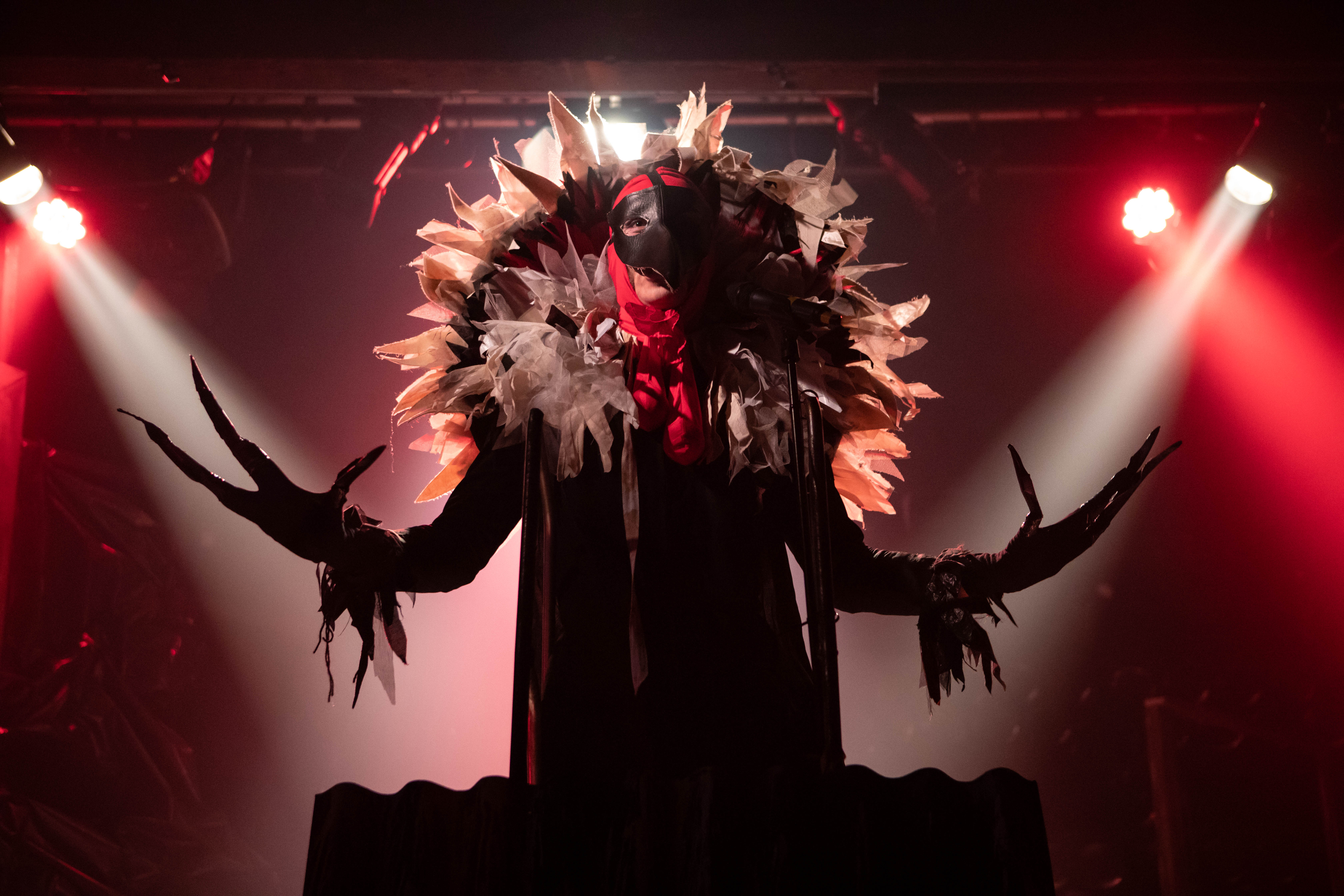 As its title suggests, it was only a matter of time before they’d all have to escape from Planet Trash, and running over to the spacecraft, they encounter a number of malfunctions (the solution is brilliantly simple – turning it off and on again, of course), before finally having a way out. 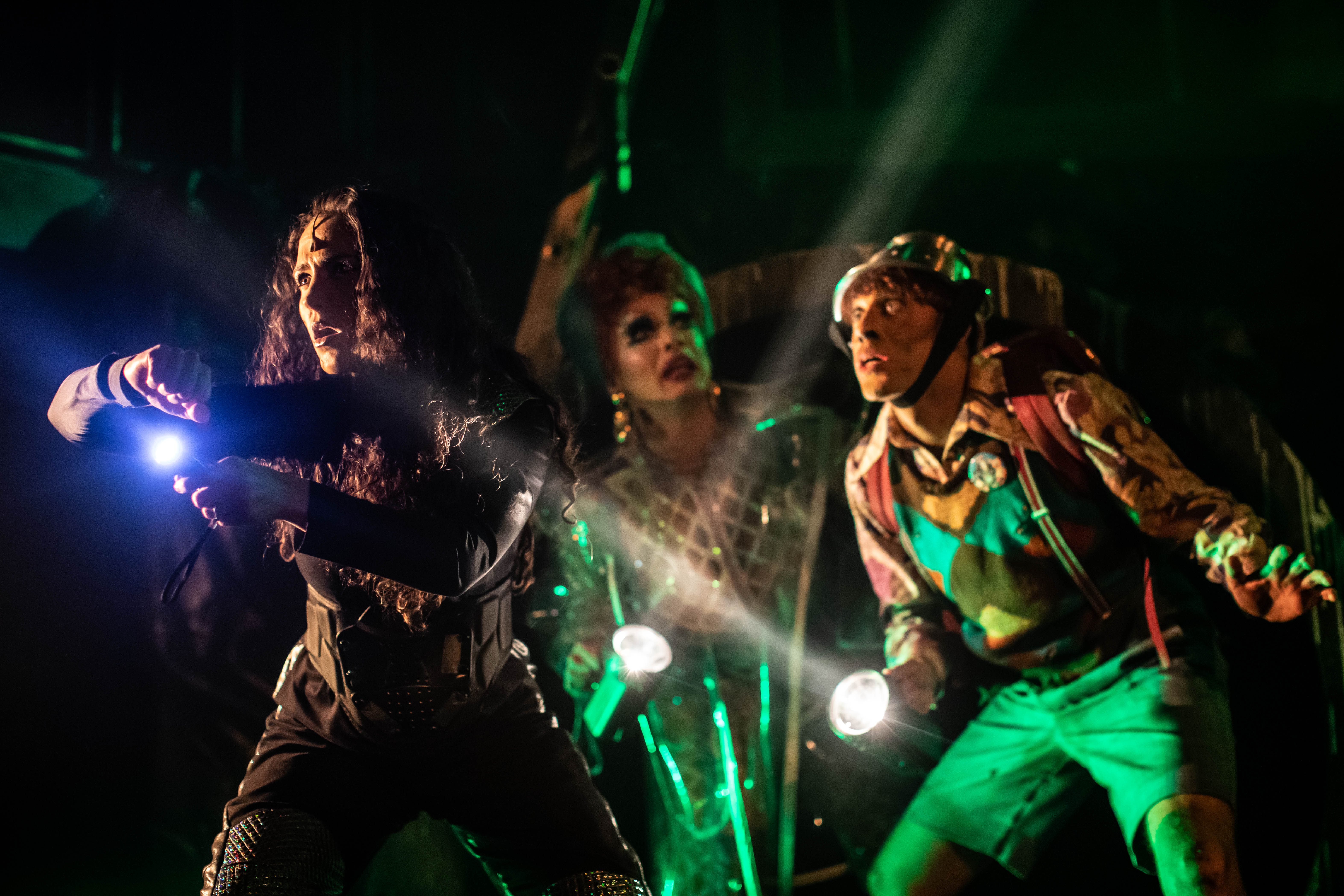 No good show is without its heroic sacrifices however, and PeePee suddenly tells Sonny she has to go. But before leaving, the two share an intimate moment, and PeePee becomes pregnant with his child. Finally seeking solace on planet trash, they begin their new lives, leaving us with a bittersweet, happy ending as our heroes escape to better days ahead. 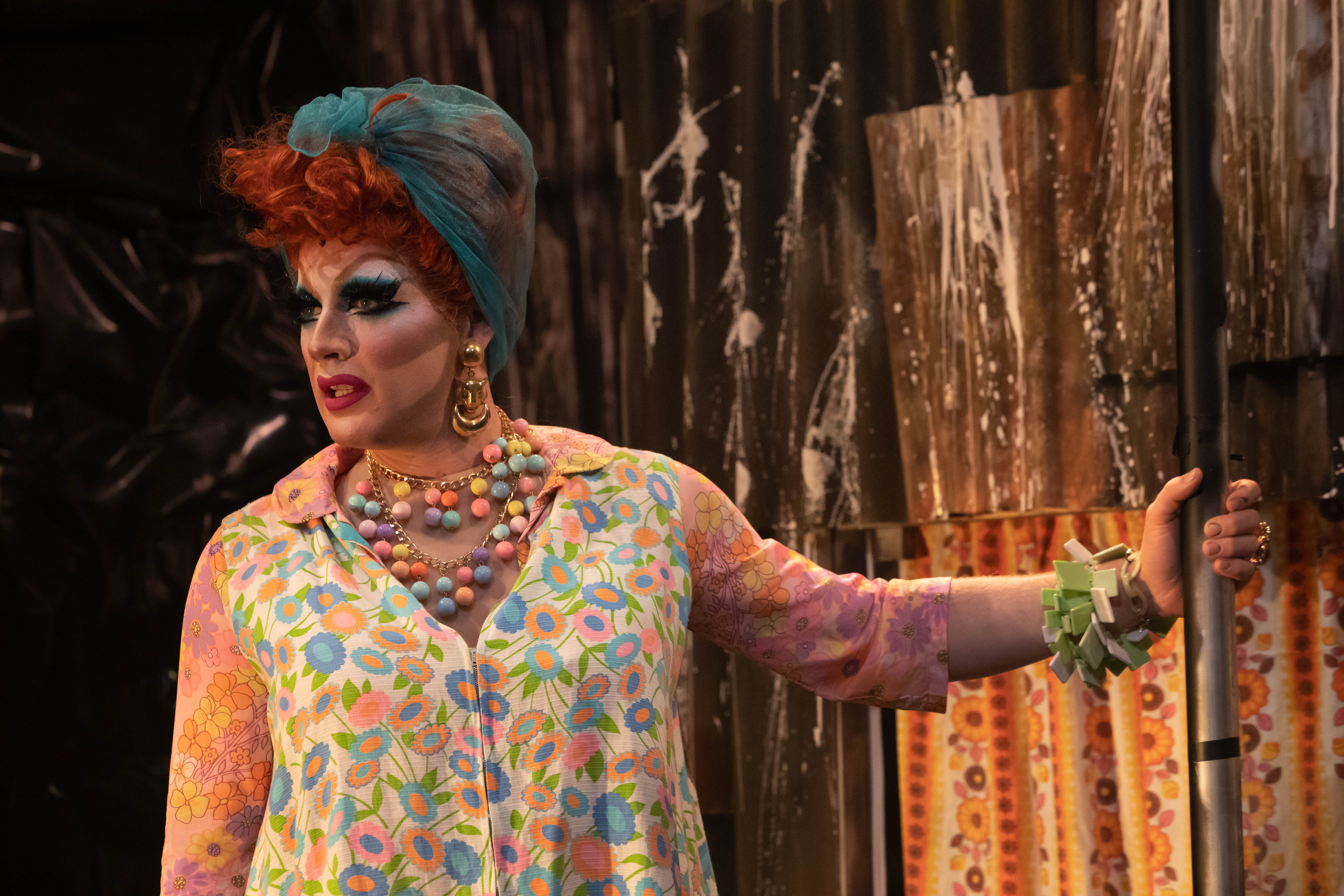 While sci-fi B-movies are intended to be so bad they’re good, Escape From Planet Trash at times doesn’t push quite hard as it could, with a good concept that had potential to heighten the level of camp further still. The show also faces plenty of gaps in its storytelling, at times feeling incomplete or jumping from scene to scene, and could afford to be tighter in terms of scripting and direction. 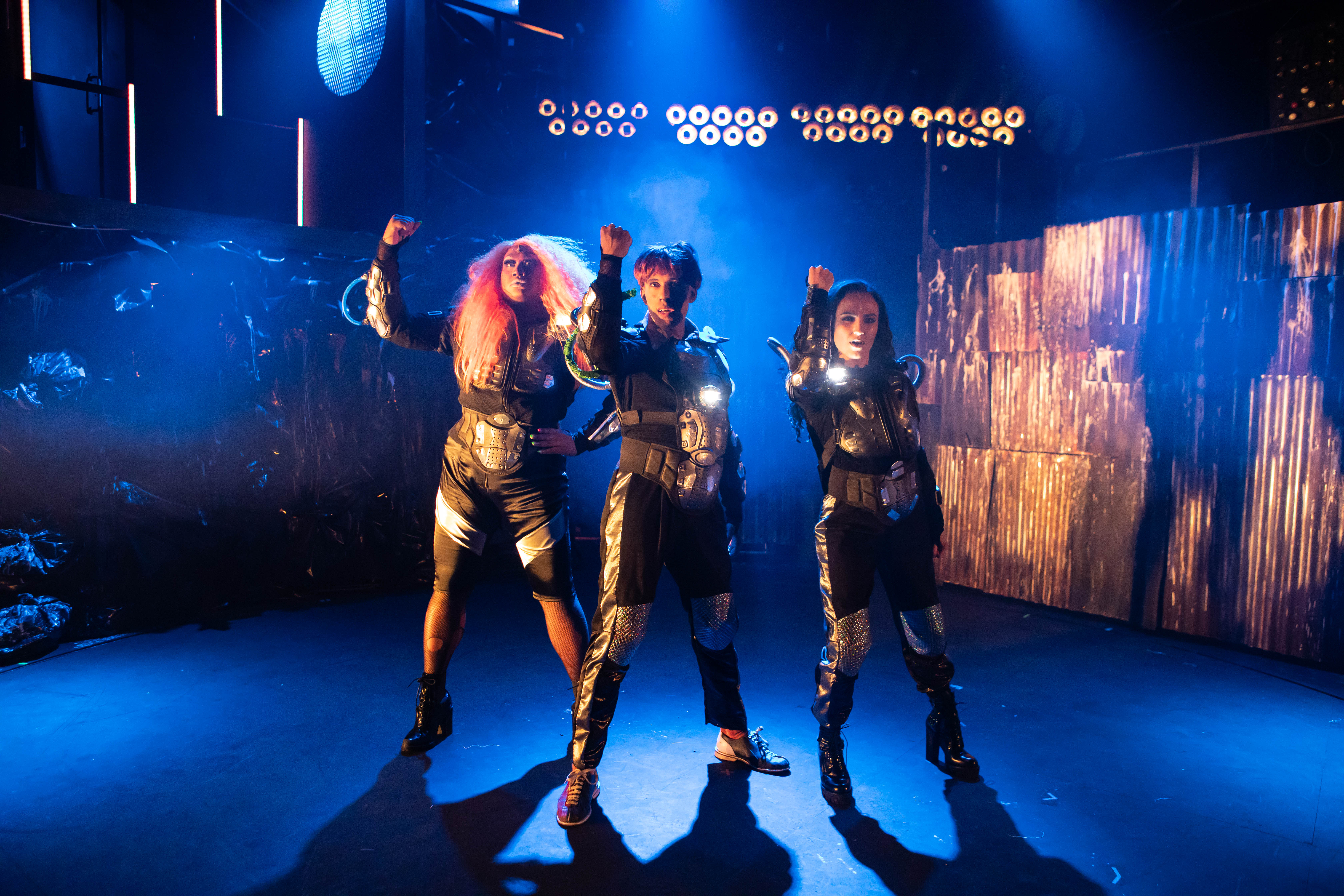 Nevertheless, Escape From Planet Trash is evidently a labour of love, and the heart and soul of its performance comes through from its cast. Beyond the humour and underneath the drag, this is a show that keeps it real, often bringing out pertinent global and political issues to the fore in an accessible and understandable way that got us laughing and thinking at the same time. As a Christmas pantomime, Ginger Johnson manages to end it on a strong, evocative note with a poignant message, reminding us how “sometimes out there, the world can be terrifying. But as long as we got each other, we are always home,” leaving us with a warm and fuzzy feeling as this extra-terrestrial bundle of fun drew to a close.