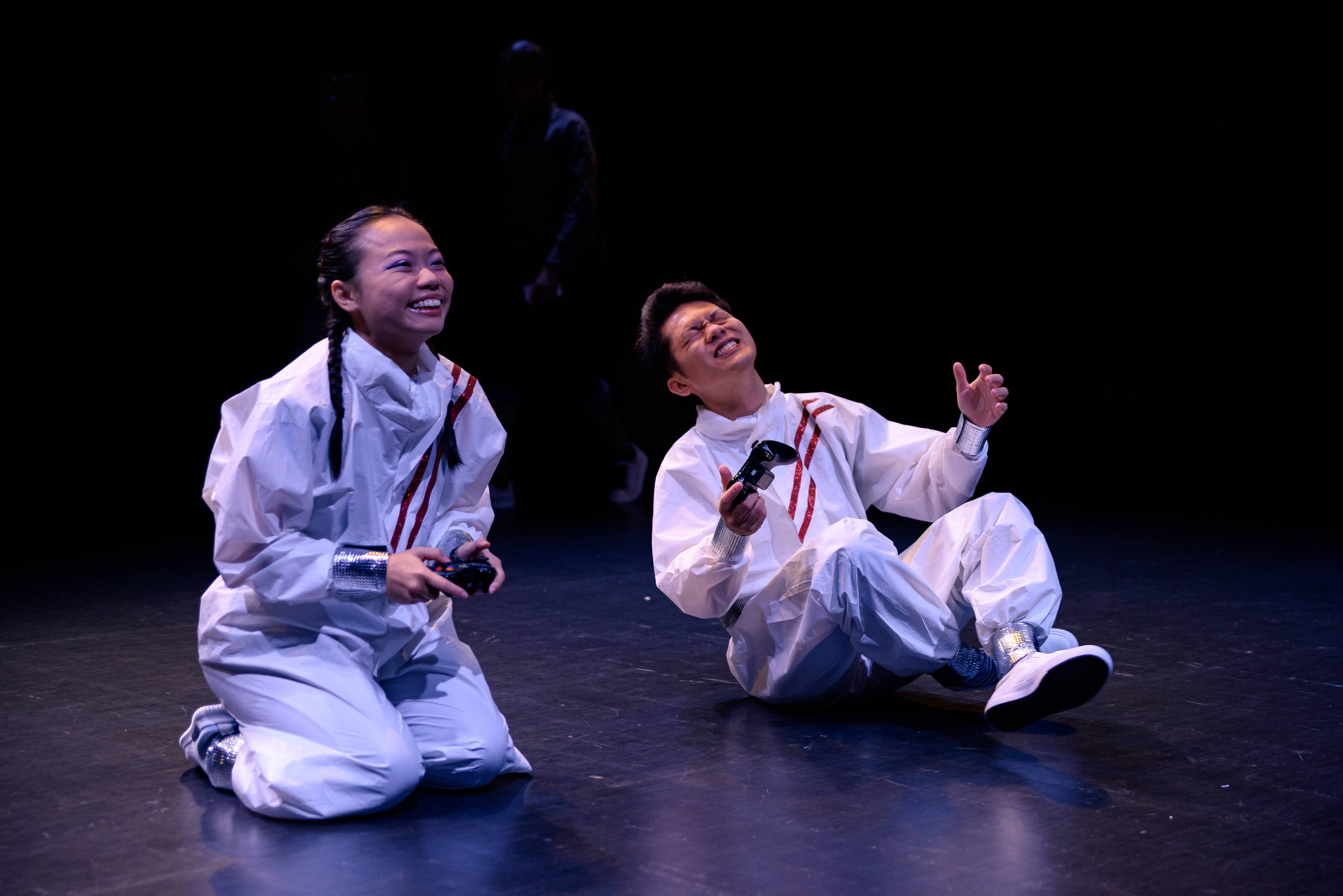 ★★★☆☆ (Performance attended 14/1/20)
Likeable performance about the making of legends gets a little lost in space.

As a fiercely competitive nation, Singapore has shown time and time again that it will continue to vie for the position of ‘first’ or ‘greatest’, constantly trying to prove ourselves in spite of our small size. But if there’s one place where to go boldly where no Singaporean has gone before, it’s space. 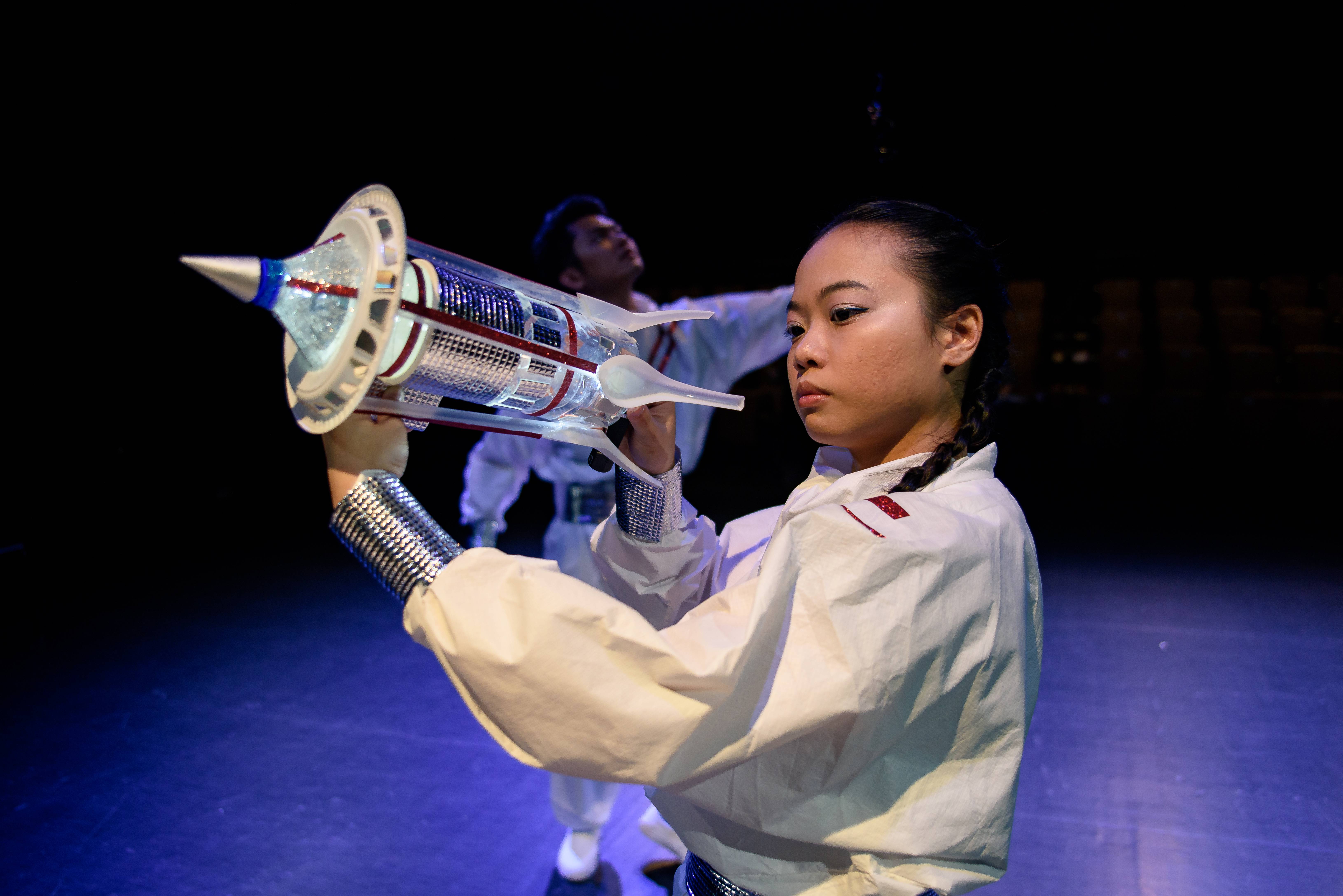 Taking a leaf from one of our earliest legends, Spacebar Theatre’s The Utama Spaceship, as its name implies, imagines Singapore in the near future, where the titular spaceship blasts off to Alpha Centauri in an attempt to colonise a new planet. Seated on the spaceship is a motley crew of cadets (the audience) led by two intrepid space explorers (Spacebar Theatre co-founders Lee Shu Yu and Eugene Koh). While the task is initially simple, likened to a 10-year long autopilot cruise, panic begins to set in when our fearless leaders realise they’ve gotten horribly lost. With no response from mission control, they must now make a decision: do they forge bravely on, or turn tail and return home instead? 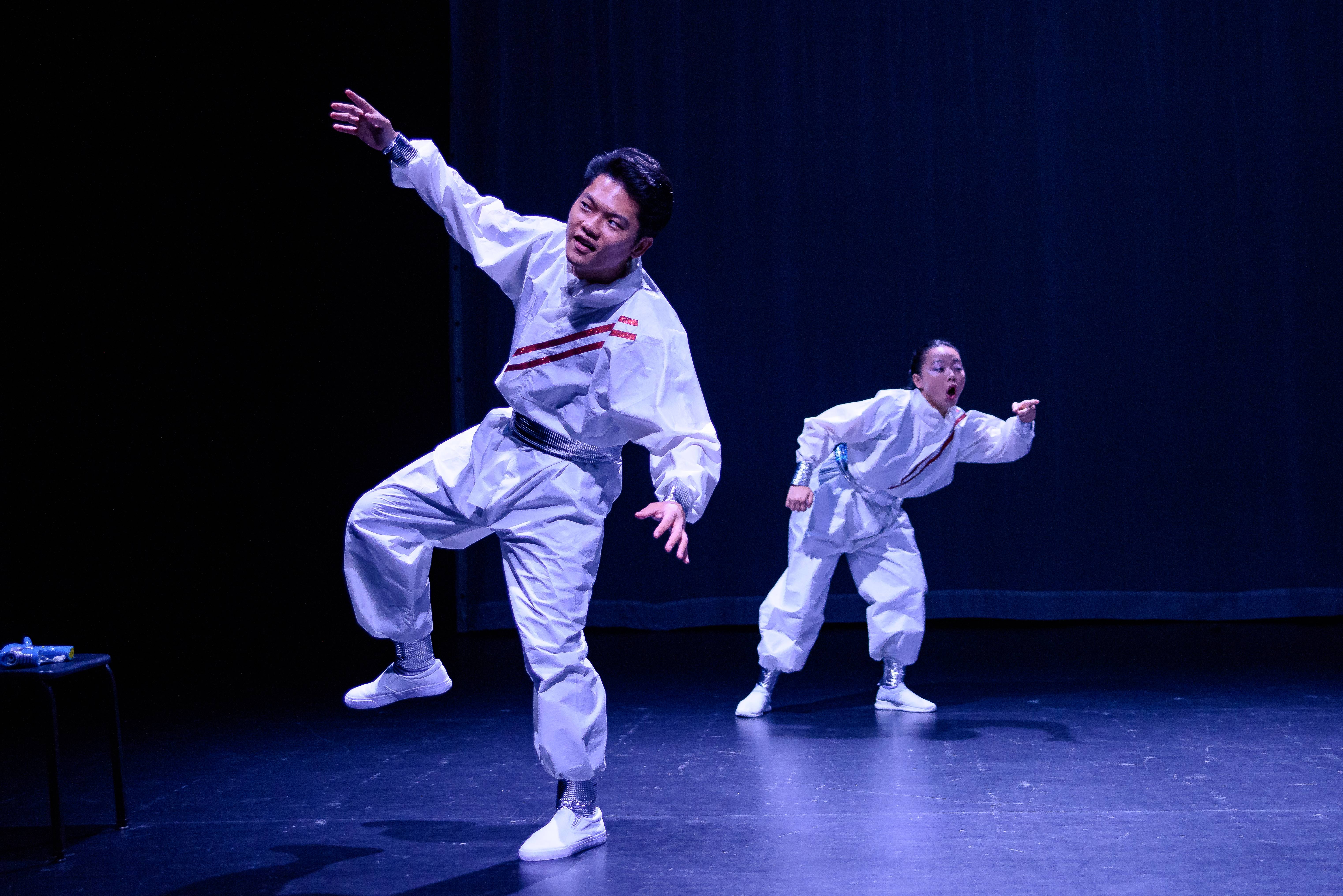 Fueled by a twin love for myths and science fiction, The Utama Spaceship attempts to straddle and link both in one quirky performance. There’s plenty to like about the staging that Shu Yu and Eugene have conceptualised, successfully creating a makeshift version of space within the black box space. With no set save for a table of props (as the spaceship’s ‘dashboard’), a projection screen displaying visions of stars and planets, and both actors dressed in puffy white ‘spacesuits’, there is an emptiness to the studio theatre that adds a subtle element of crushing loneliness and the sensation of being outside of our planet. 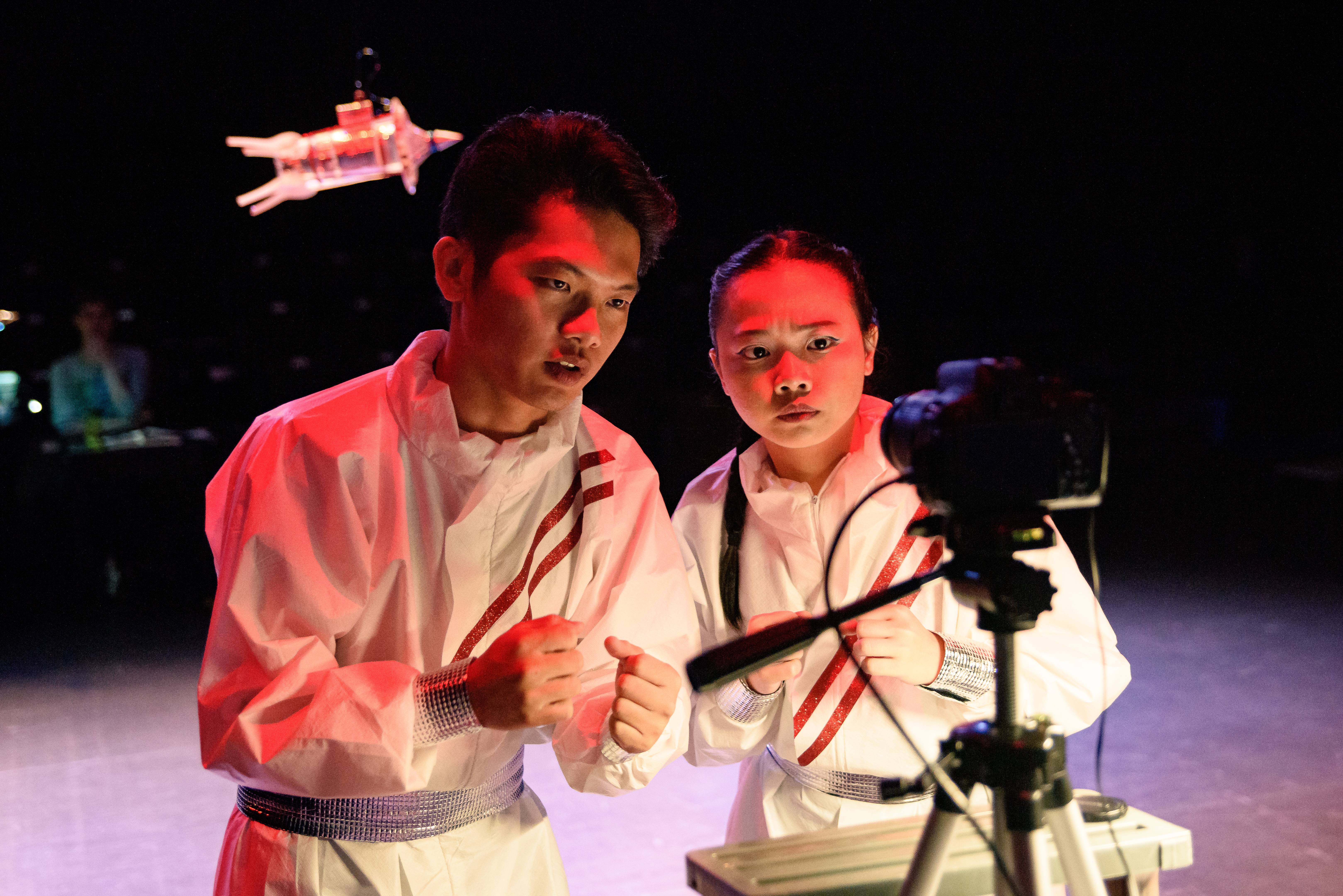 For much of the performance, The Utama Spaceship comprises various scenes of Shu Yu and Eugene dealing with various issues that arise while floating through space. Each scene is swathed in a charming, offbeat sense of humour, from a misguided attempt to use tongs to snap at water bubbles, to clamping a mysterious hole with their hands. Simply watching both actors banter with each other is a joy, often veering into the irreverent and non-sequitur as they make cheeky references to both Singaporean culture and beloved space franchises. 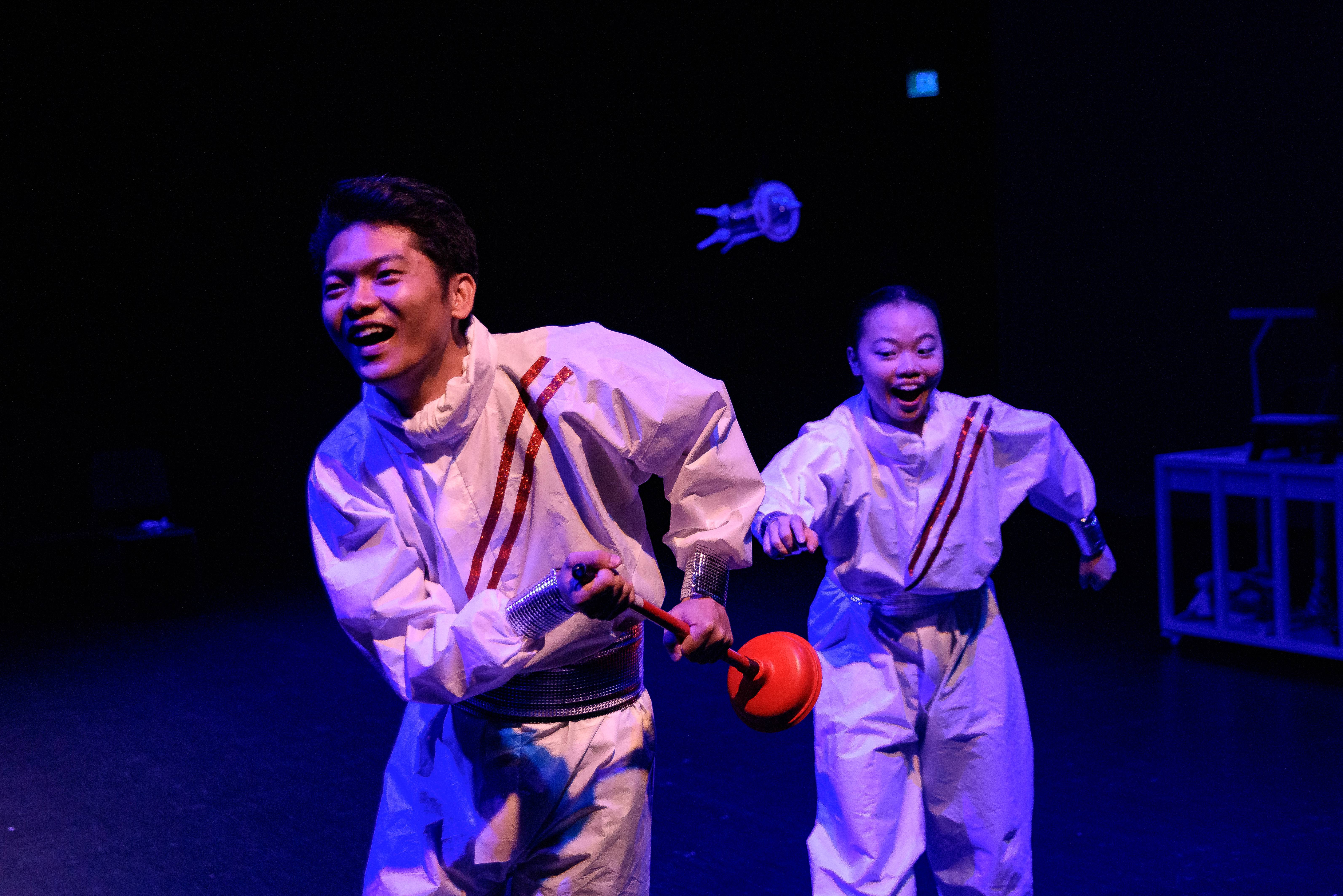 Shu Yu and Eugene also employ plenty of audience interaction throughout the show, from playing a game of Space Invaders, to even celebrating the ship’s 500th day in space with party hats and noisemakers, to hearing out suggestions for a proper name to term Singaporeans in space. A lot of these end up as brief, enjoyable sketches, buoyed by both actors’ good chemistry with each other and the audience that keeps us hanging on to see what comes next. 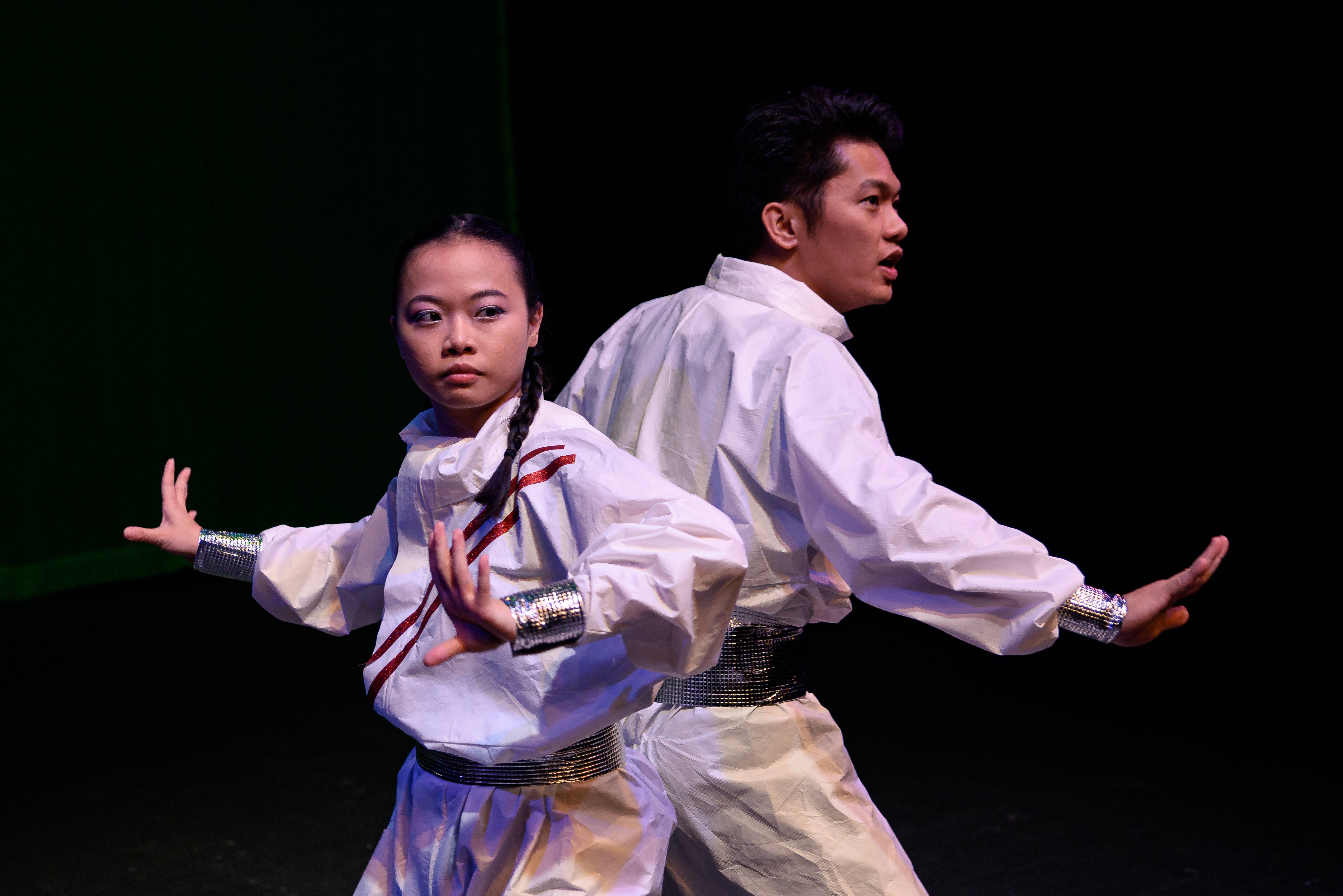 Where The Utama Spaceship faces issues is when it attempts to maneuver its way from sketch comedy to poignant reflection on myth and myth-making. In emphasising how Singaporeans only ever have the Sang Nila Utama legend to return to, they repeat the story (to varying levels of ludicrousness) thrice, portraying how they have been forced to come up with newer, more exciting versions of the tale throughout their time onboard the spaceship. This is never explicitly linked to the physical and situational comedy created from their antics in space, and the final message of crafting new stories for a new history comes across as shoehorned rather than properly scaffolded throughout, leaving the final impact somewhat muted. 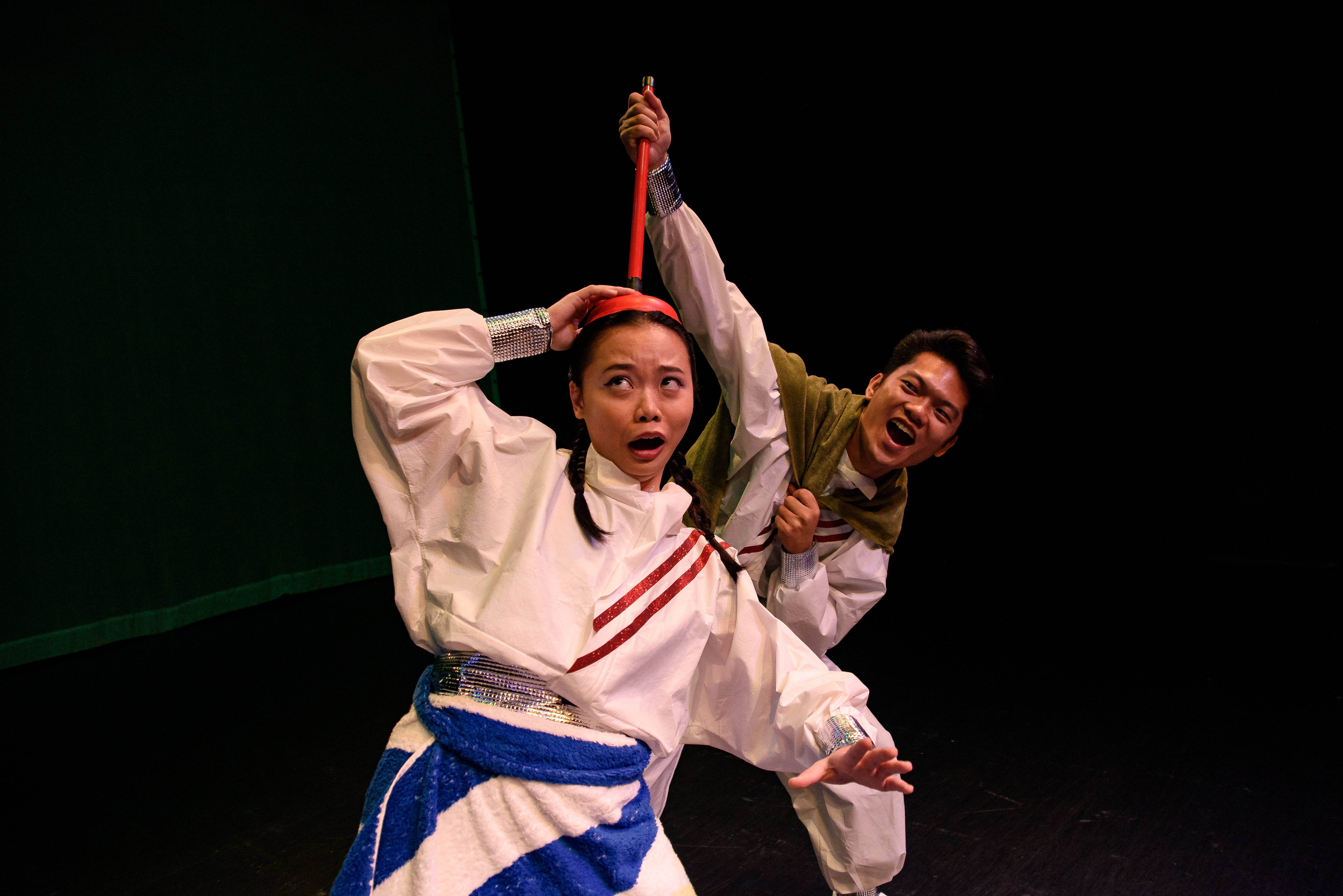 Still, one appreciates Spacebar Theatre’s good work in bringing outer space to the theatre space, as well as the likability of both Shu Yu and Eugene in fully embracing the show’s quirks and sense of fun. But if Spacebar Theatre wants to have as much of an emotional impact as it wants to provide, the ideas raised must be better strung together, rather than loosely juxtaposed against each other. The Utama Spaceship may have lifted off, but still has some way to go before reaching infinity and beyond.

The Utama Spaceship played from 14th to 15th January 2020 at the NAFA Studio Theatre as part of the 2020 M1 Singapore Fringe Festival.